The blesbok and bontebok used to be seen as separate species, but currently they are both seen as subspecies of D. dorcas. 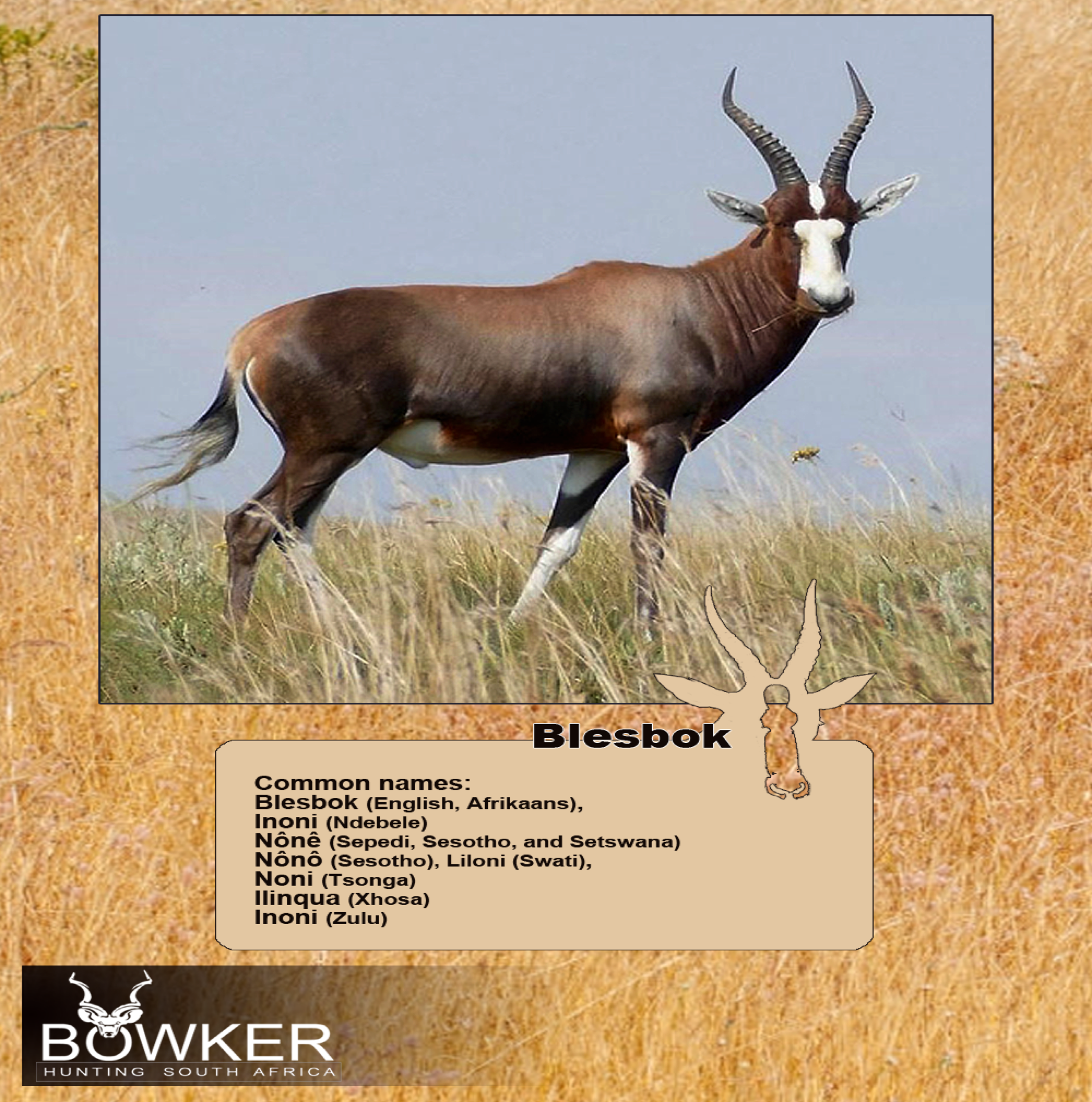 Physically, rams and ewes are remarkably similar. Their mass can be as much as 85 kg. A characteristic of the Blesbok is the prominent white blaze on the face and a horizontal brown strip which divides this blaze above the eyes. Body colour is brown with a lighter coloured saddle on the back, and the rump an even lighter shade. The legs are brown with a white patch behind the top part of the front legs with the lower legs whitish. Both sexes carry horns, ringed almost to the tip. Female horns are slightly more slender. 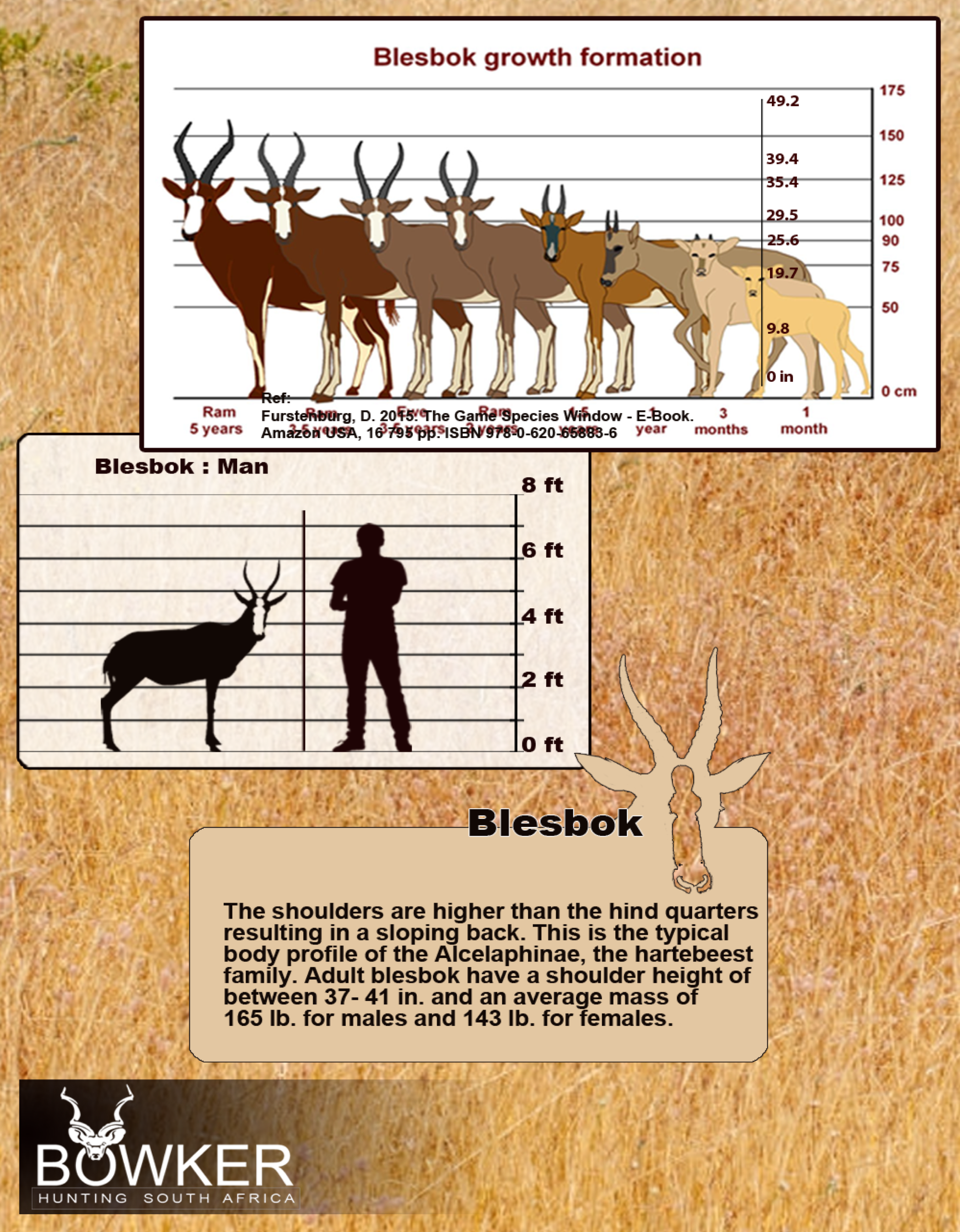 The Blesbok's distribution is restricted to the Republic of South Africa. Historically they ranged in the central highlands of the Free State, Eastern Cape, southern parts of the former Transvaal, and marginally in KwaZulu-Natal. After being heavily hunted, population numbers have recovered dramatically due to vigorous conservation in game reserves and farms. 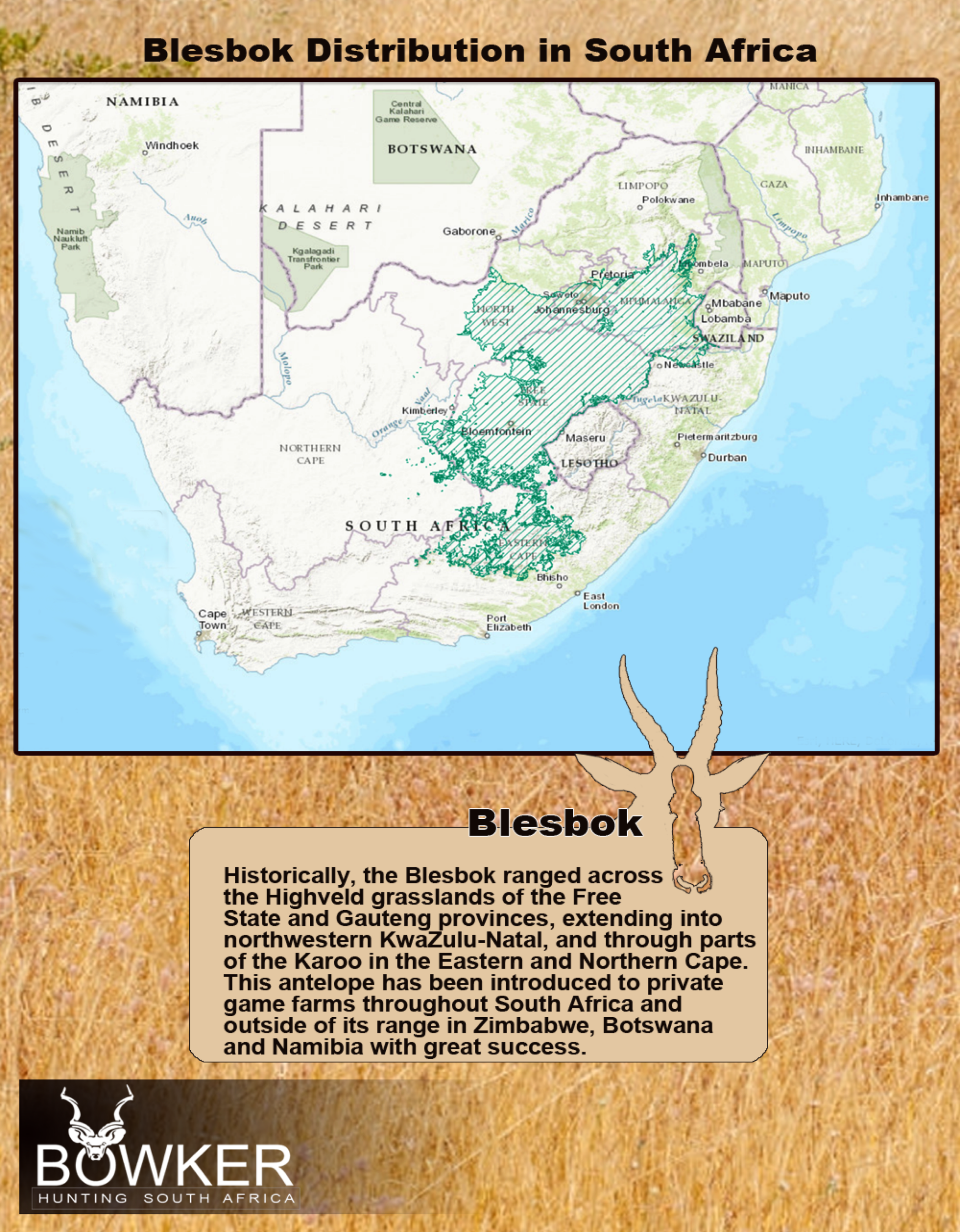 The blaze which gave the Blesbok it's name:

The common name is a derivative of the Afrikaans words for blazed antelope, which is in reference to the white blaze found on their face. The saddle and the rear of the buttocks are a dull yellow-brown. The underside of the body and parts of the lower legs are a dirty white. 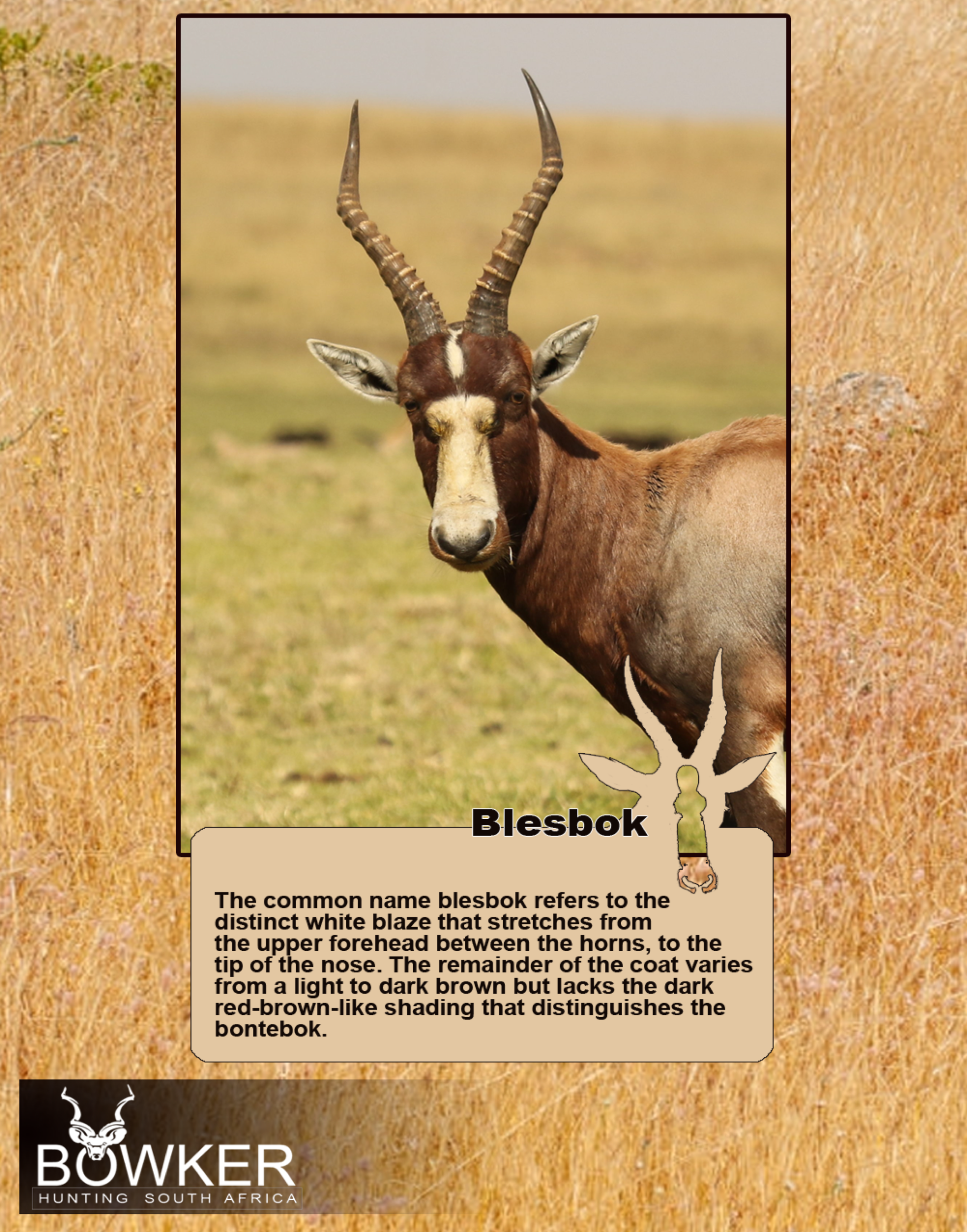 Their natural habitat is Highveld, open grassland with water. Territories are established in open, heavily over-grazed veld or brackish areas demarcated by fixed latrines that are used repeatedly. Rams are often found lying or standing on a dung midden displaying their dominance. Lions, leopards, African wild dogs, spotted hyenas, and cheetahs are the blesbok's main predators, while jackals and eagles may attack calves 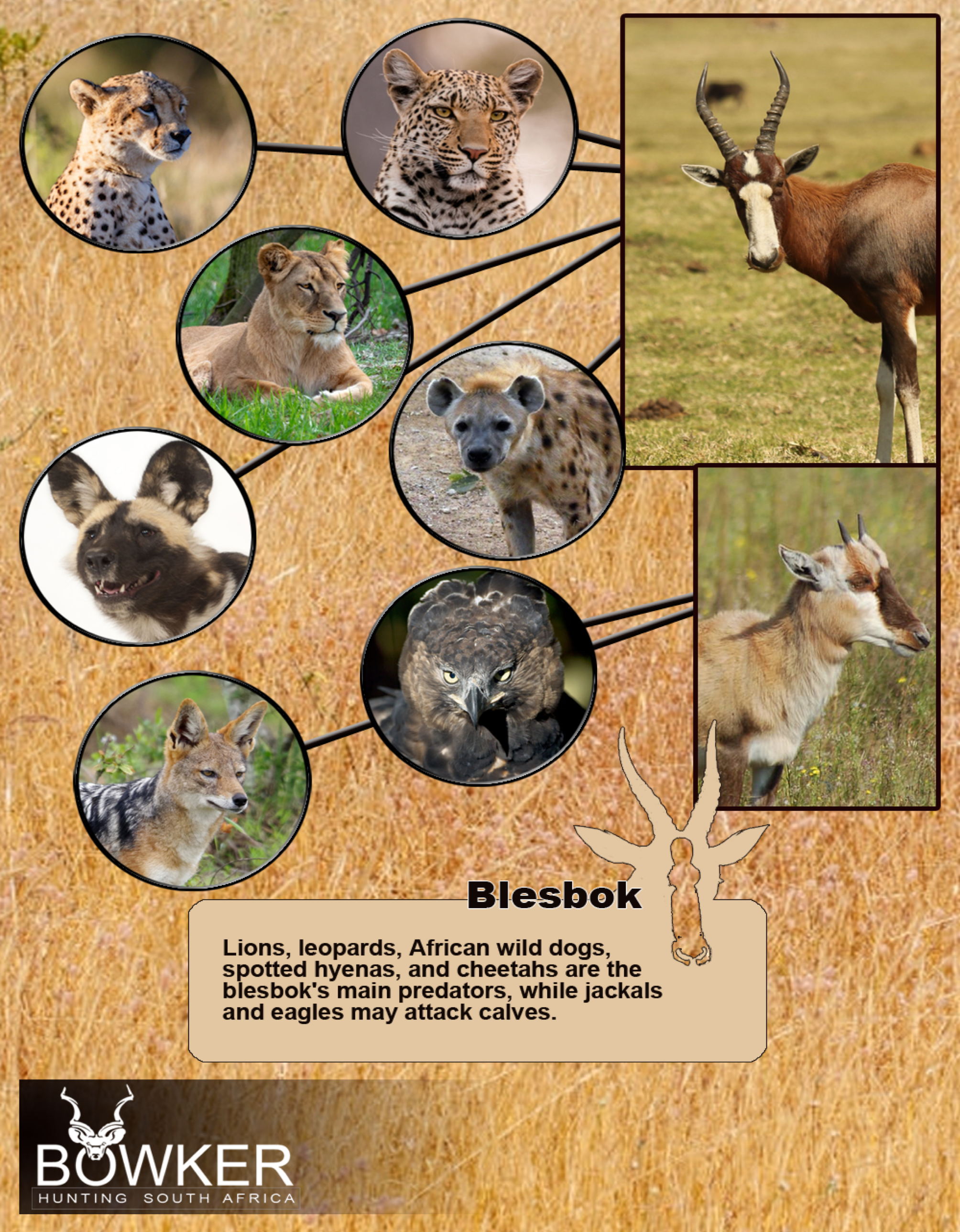 Blesbok are predominantly diurnal in their activities. They become less active during the cold winter months when large groups spend hours either lying in the sun or, when the sun becomes too hot, lying in the shade of trees. They repeatedly use the same routes to and from feeding grounds and water, following each other in a single row. Bodily contact between blesbok individuals is rare and Individuals groom themselves by rubbing the body with the muzzle or horns or by nibbling the skin with the incisors. This is known as allo-grooming.

Blesbok are social animals that form the following herds:

- family groups of 20-120 consisting of sub-adult females of all ages, young males of 1- 2 years and post-mature ewes

- harem groups of 4-25 socially mature ewes older than 2.5 years with their lambs of 10-18 months. The harem is sometimes associated with a territorial ram

- bachelor groups of predominantly male sub-adults of 2-4 years and, occasionally, one or two adult rams older than 4 years. 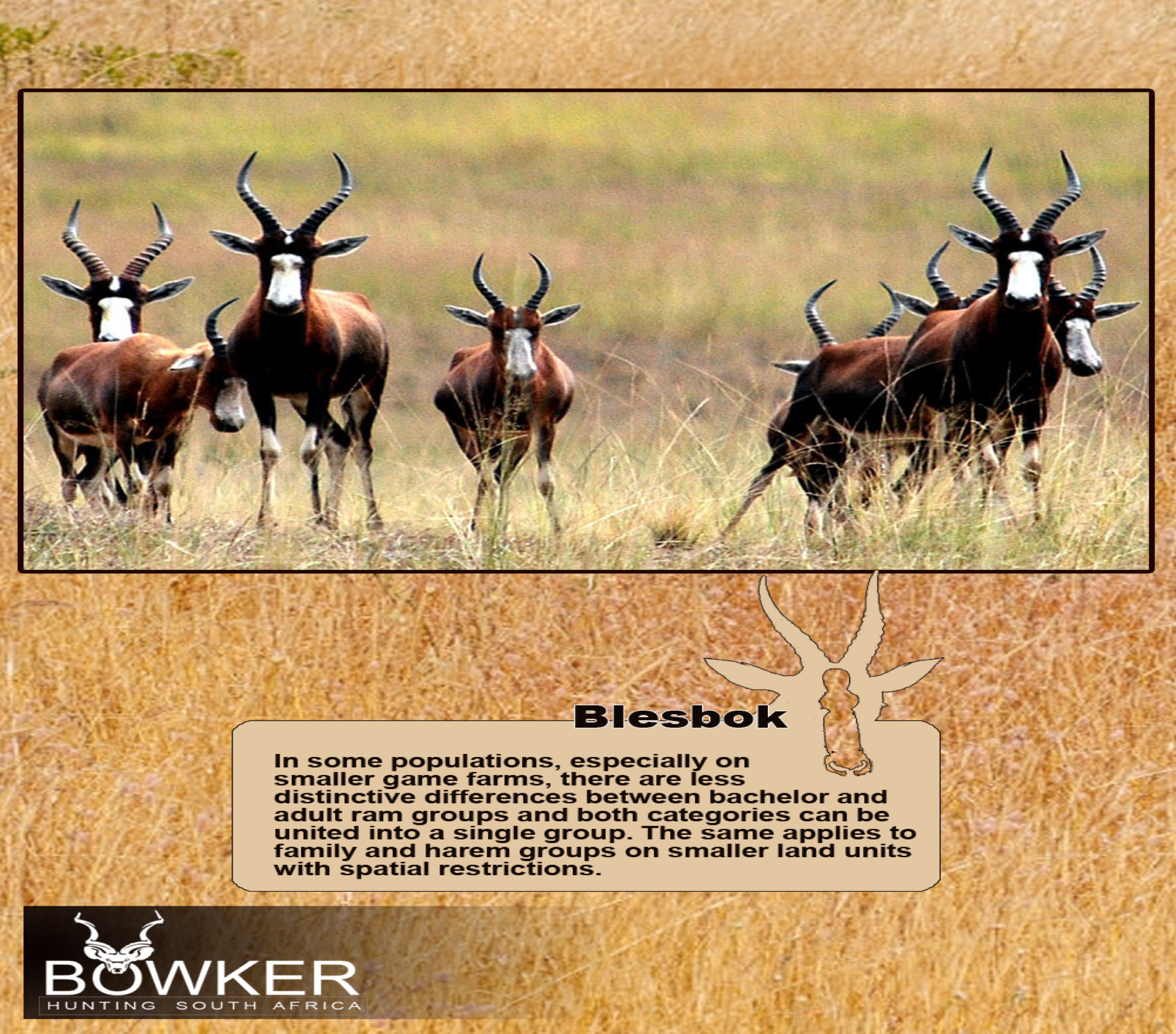 Females give birth to usually a single calf early in the summer. Blesbok calves differ from most other small or medium antelope species by staying with their mothers instead of hiding. 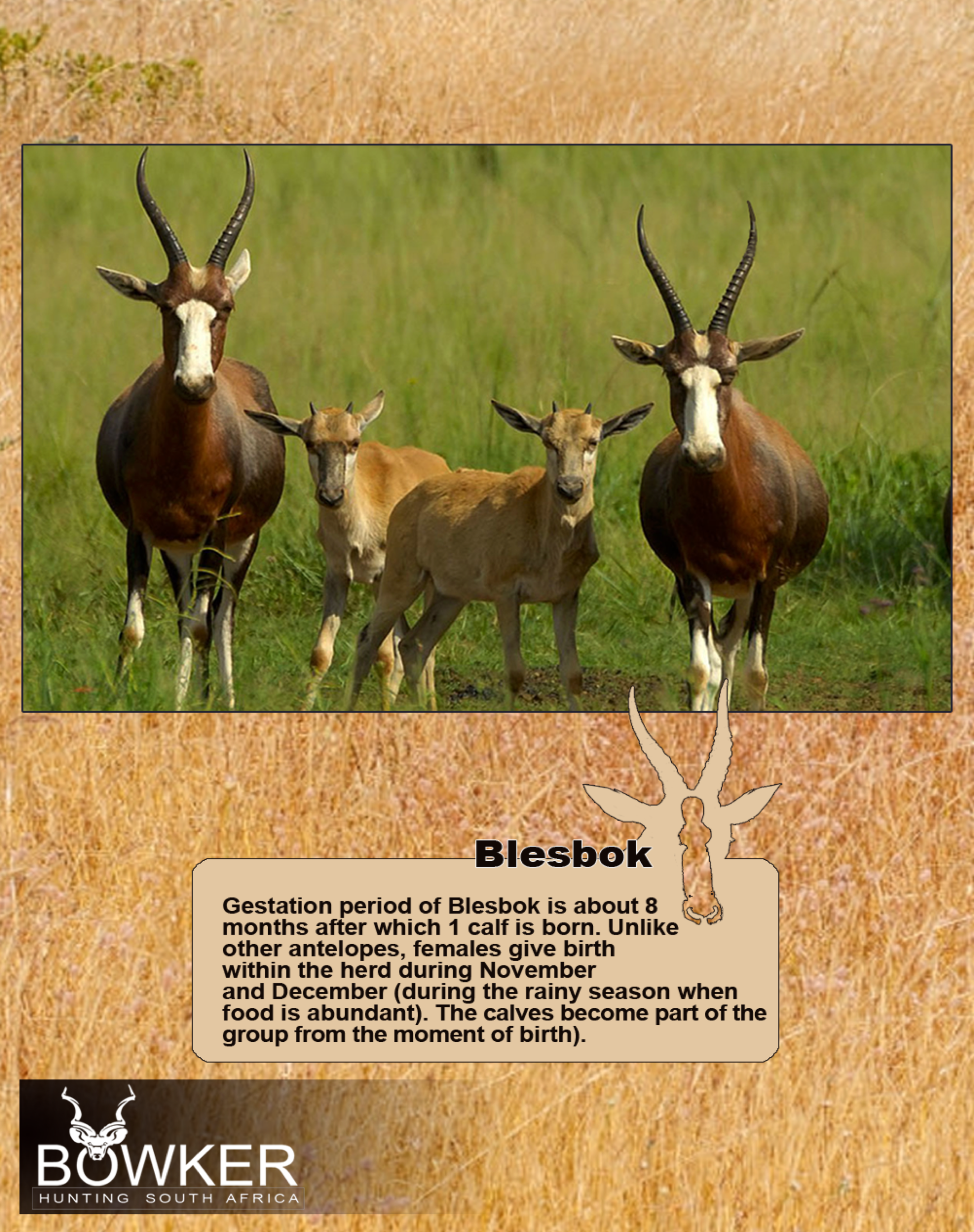 Usually hunted in open terrain where long shots are often the order. Can be stalked successfully and taken under 100m in suitable terrain. Use a medium bore rifle that you can shoot accurately and feel comfortable using. 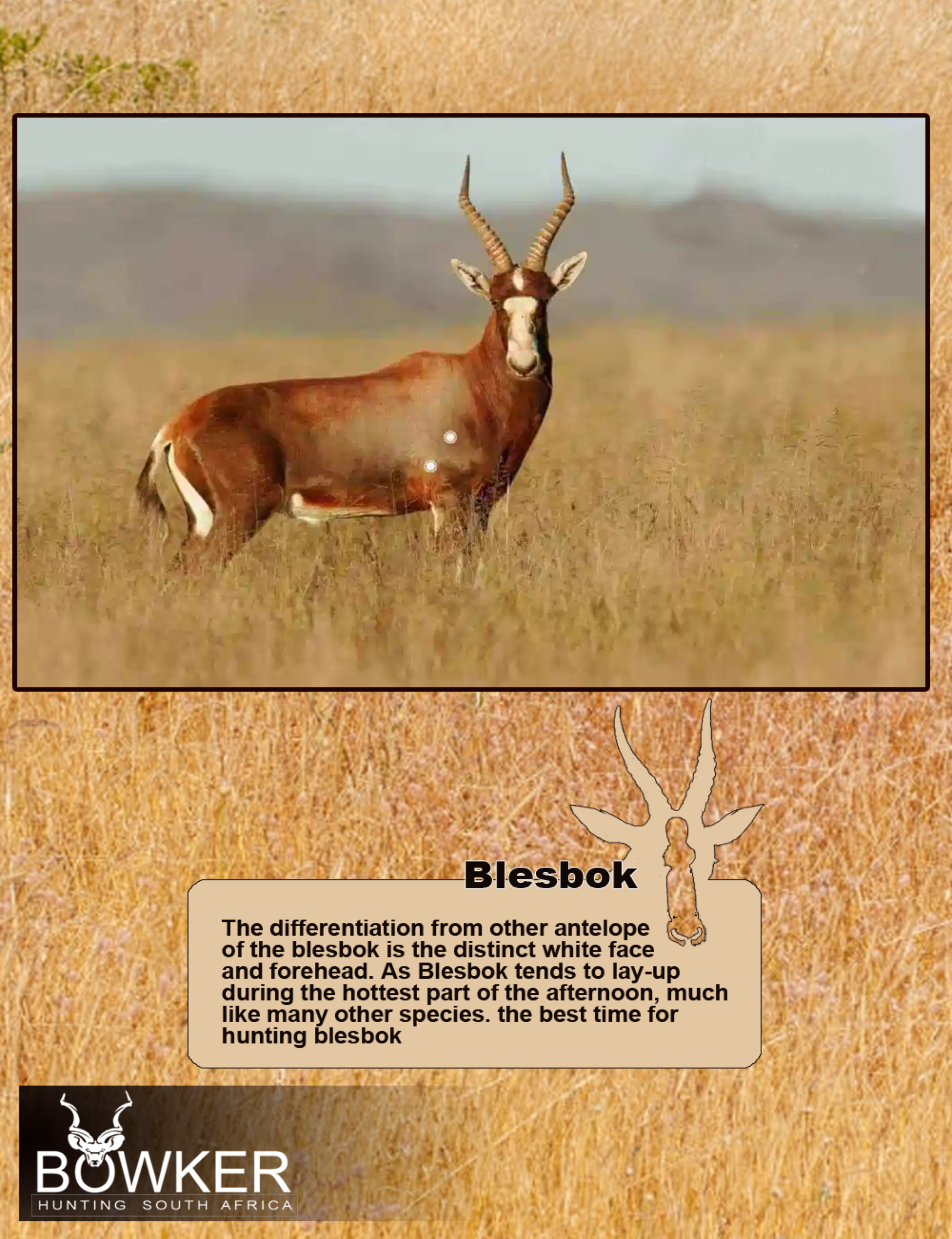 Your blesbok ram trophy should have an average shoulder height of around 35 inches, weigh about 130 pounds, and have a horn length of approximately 13 – 15 inches. The Safari Club International minimum score for a common blesbok is 40, and a white blesbok is 39. 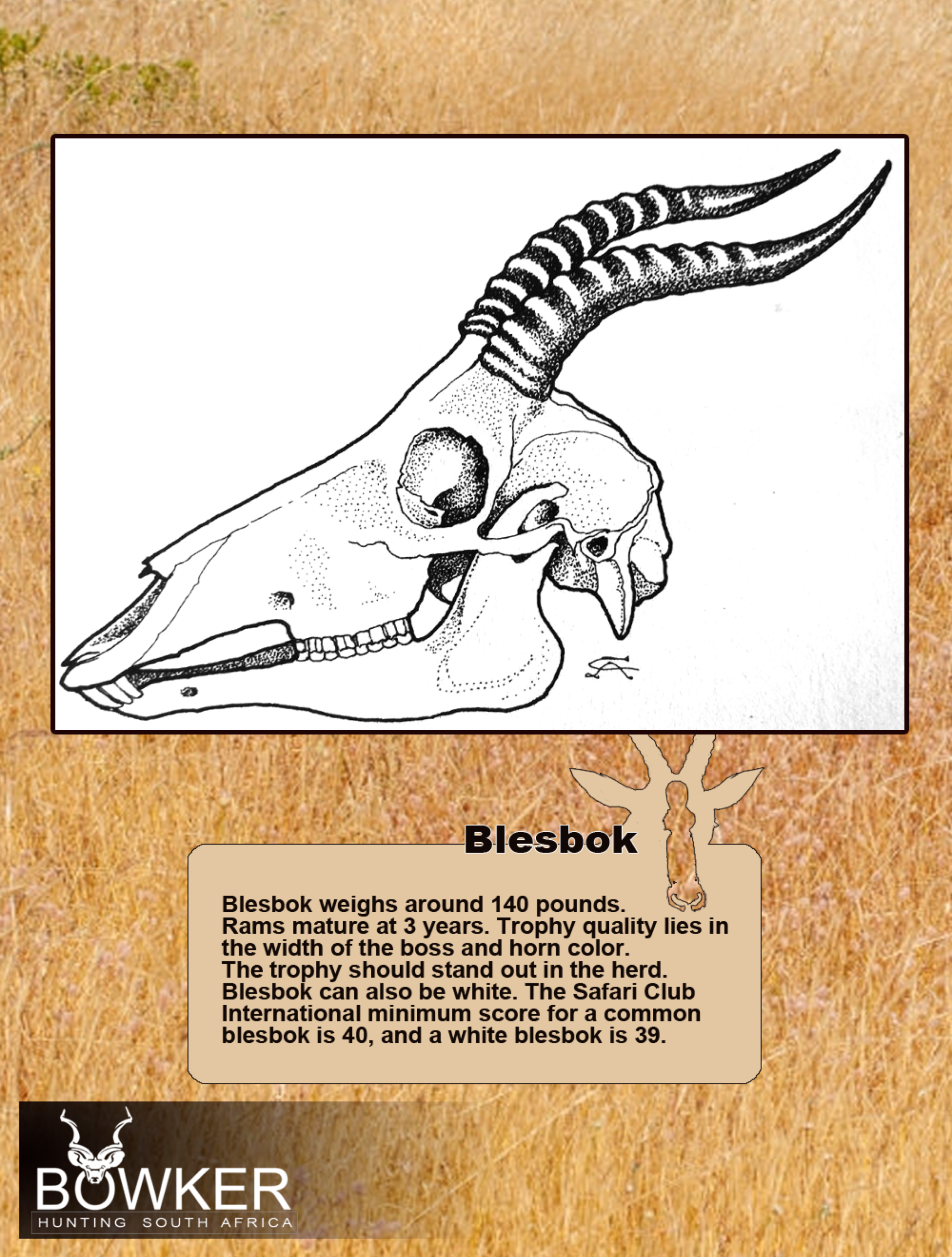 Two important color variants of blesbokhave been bred by private game farmers for the commercial market namely the white and yellow blesbok. Both variants have the ability to interbreed with each other and with the common blesbok as well as with the bontebok. 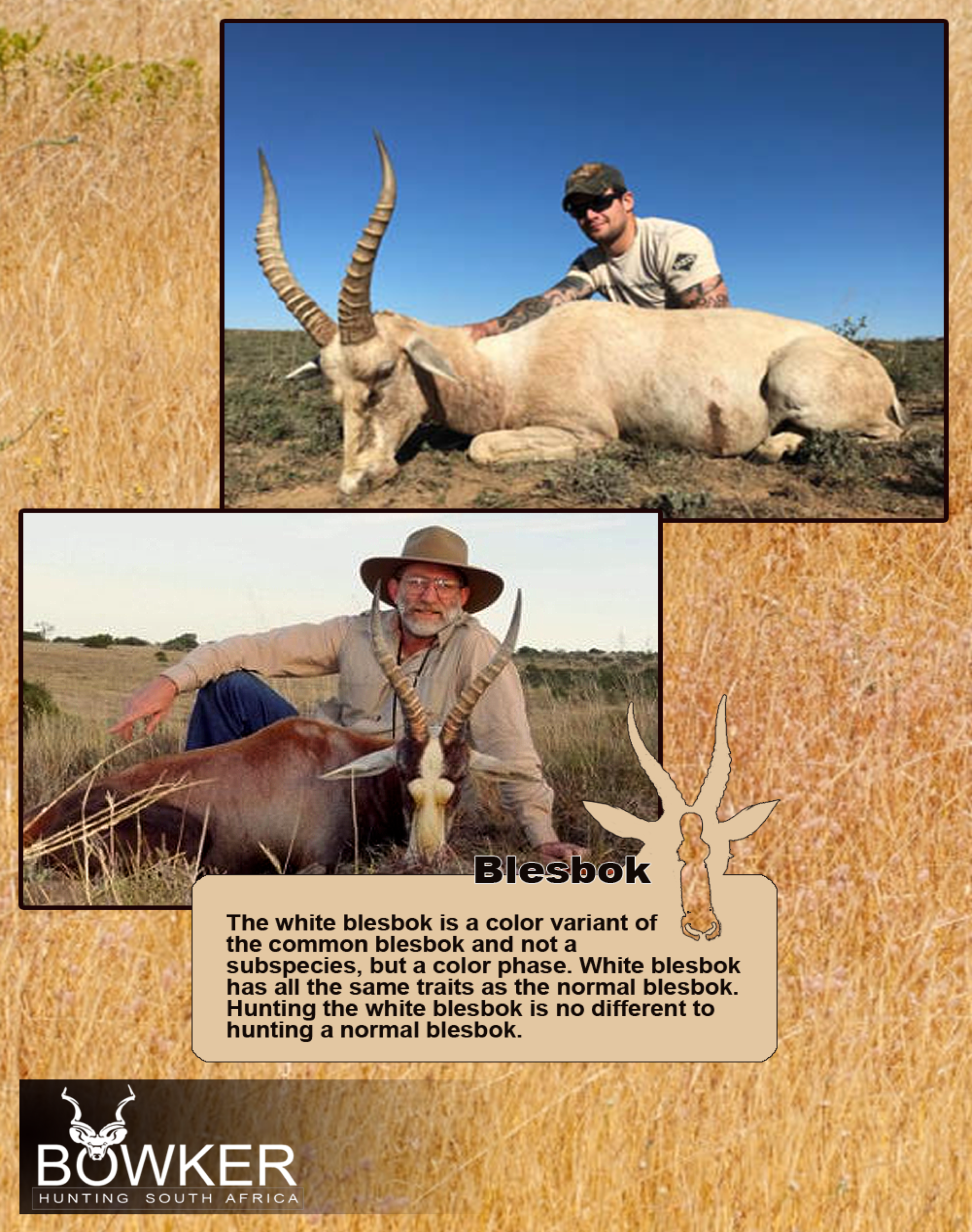 Fig 10: Comparison between the common and white Blesbok.