The Black Faced Impala In Namibia

The Black-Faced Impala in Namibia
by Tammie K Matson

Synopsis of the paper æ“¢uture management of the Black-faced Impala in Namibia: A co-operative, multi-pronged approach to the conservation of a vulnerable subspecies 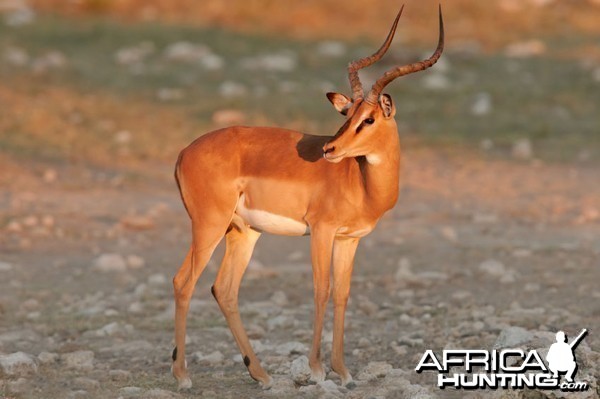 Editor's Note: In a very recent communication (August 2007), Conservation Force Chairman John J Jackson III informed David Mallon, Co-Chair of the IUCN Antelope Specialist Group that the estimated number of black faced impala within Etosha National Park and on private land surrounding the park is mostly around 3,200 animals, substantially up from 2,200 reported by Rod East in the 1998 Antelope Report. Jackson further reports a small number (50-100) that have been introduced and are increasing in Namibia's communal conservancies. According to personal communication between Jackson and Chris Weaver of WWF-LIFE Namibia, as many as 1,000 of this antelope, endemic to Namibia and southern Angola have recently been discovered in one of the northern conservancies bordering Angola. The Namibian Ministry of Environment and Tourism has a management plan to prevent the hybridization with common impala that's in the process of being adopted. The plan also strictly regulates trophy hunting of black-faced impala together with the black-faced impala committee of the Namibian Professional Hunters Association (NAPHA). Conservation Force has been involved from the beginning in all aspects of black-faced impala conservation, including the funding of the national management plan, and is confident in its status. There is every reason to believe the impala is safe and well-managed in Namibia as a valuable game animal.

The Black-faced Impala Aepyceros melampus petersi is a vulnerable, arid-adapted subspecies of impala that is endemic to Namibia (IUCN Red Data Book, 2005) and classified as specially protected according to the Namibian government's Nature Conservation Ordinance (1975). The subspecies evolved geographically separately in the north west of Namibia and south west Angola to become phenotypically and genetically distinct from the more abundant common Impala Aepyceros melampus melampus. Widespread poaching during the war for independence, competition with livestock and severe droughts decimated the population in their historic range, the Kunene Region, and in the early 1970s the then Department of Nature Conservation translocated approximately 200 black-faced impala to Etosha National Park to establish a population which has thrived ever since. In this short note a brief overview of the current status of this endemic subspecies in Namibia is provided and suggestions made for future reintroduction strategies for the conservation of black-faced impala in Namibia.

Current status
Namibia's black-faced impala population is estimated at less than 4000 animals remaining in the wild, with few subpopulations exceeding 200 animals. The population is composed of many small populations across a range of land use types: Almost half (~1500) of the population occurs in Etosha National Park in five distinct subpopulations, perhaps 1800 occur on commercial game farms across the country and the population in the Kunene Region is uncertain, but has been estimated at approximately 500. In Angola, the population is probably extinct. This overall small population size remains a threat to continued survival. Small captive populations exist in zoos outside Namibia, but ex situ populations are small and are not considered pivotal to safeguard the population in the wild. Private reserves such as Ongava Game Reserve, managed by Wilderness Safaris and containing one of the largest populations of black-faced impala on private land (~200 animals), have contributed enormously to the conservation of the subspecies. Ongava's population has been the subject of considerable research focusing and in recent years, much knowledge has been gleaned of the black-faced impala's previously little known ecology. Crucial information on the habitat preferences of the subspecies and the factors affecting the success of translocations over the past 30 years has provided a foundation for a calculated reintroduction program to new areas.

Introducing founder populations of more than 16 black- faced impala has been found to be essential to ensure a successful translocation. Further, the discovery that black-faced impala are genetically different from common impala elsewhere in Africa provides great incentive for conservation). The Etosha population contains high genetic variation and does not exhibit signs of genetic hybridization, which means it can be used as a å¢ure? source population for enhancement of the distribution outside the park.

The draft plan, developed in partnership with the Ministry of Environment & Tourism of\ Namibia, includes reintroductions of founder populations back to the subspecies historic range. Much of the core historic range is comprised of communal conservancies and a comprehensive survey of the population's status and an assessment of the suitability of these areas black-faced impala reintroductions is now essential. Also of huge potential are private game ranches. An incentive scheme similar to the Wildlife Breeding Stock Loan scheme is suggested to allow both land-owners and communal conservancies to establish viable populations of 30 black-faced impala, loaned to them by MET from Etosha, on the proviso that they meet all criteria and return 30 black-faced impala to the MET after 5 years or when the population exceeds 60 individuals. Farmers in a minimum two-farm or 20km buffer zone around Etosha, especially those with common impala, will be prioritized for loans, pending total removal of all common impala. Farmers/conservancies are responsible for the complete removal of all common impala on their properties to be eligible for registration as a å¢ure black-faced impala property and the Wildlife Breeding Stock Loan scheme. 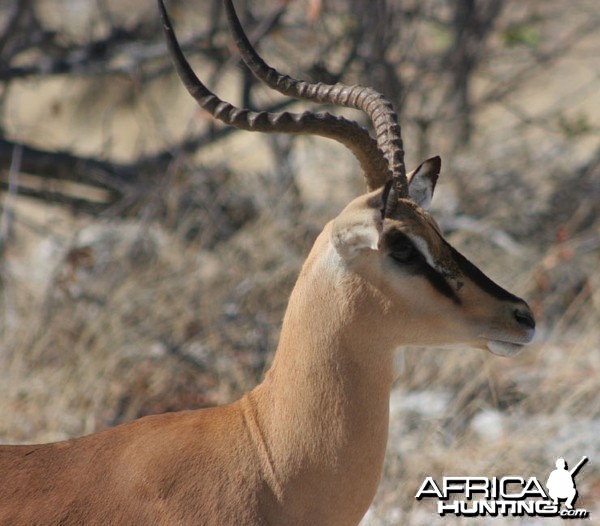 The growing commercial game farm industry in Namibia has both facilitated the growth of the population of black-faced impala on private land, while also causing one of the most serious threats to the subspecies: That of hybridization with common impala, introduced from South Africa and north-eastern Namibia. Black-faced impala fetch a relatively high price at game auctions (R9500) compared with common impalas (R1300), and this must be seen as an incentive for farmers to build up their populations of the endemic subspecies. Preventing further hybridization between common and black-faced impala on private land is essential for the conservation of Namibia's endemic subspecies. The tourism and hunting industries have important roles to play in promoting the importance of this endemic, arid-adapted subspecies as a key component of Namibia's unique biodiversity and an attraction for visitors and both will benefit from preventing hybridization.

In partnership with the Ministry of Environment & Tourism of Namibia, a study to determine which of the fifteen communal conservancies in the Kunene Region are suitable for reintroductions of black-faced impala has been proposed for 2006/7. This will pave the way for a calculated reintroduction program to particular conservancies, based on environmental and social criteria. The study has the support of the Kunene Communal Conservancies Association (KCCA), as the return of black-faced impala is perceived as important for the sustainable development of the Region. These proposed reintroductions are important to local ecotourism projects and several conservancies involved in joint ventures with Wilderness Safaris will be involved, including the Marienfluss Conservancy, located on the Kunene River, and the Torra and Doro !Nawas Conservancies in Damaraland. In addition, the communal conservancies bordering the Palmwag and Skeleton Coast tourism concessions, currently held by Wilderness Safaris Namibia, will be considered for reintroduction suitability.

The draft management plan identified black-faced impala stakeholders as the Ministry of Environment and Tourism of Namibia, the international community (IUCN, USFWS), the Namibian Professional Hunting Association, the Namibian tourism industry (FENATA), communal conservancies in the Kunene Region, relevant NGOs (NNF, WWF, IRDNC & NACSO) and the Namibian Agricultural Union (NAU), among others. Future management and conservation of the black-faced impala population will require a co-operative, multi-pronged approach that implements incentives for landholders on commercial farms and communal conservancies, whilst simultaneously protecting the source population occurring in Etosha National Park. A widespread publicity scheme, with the co-operation of all stakeholders is recognized as essential to the success of the actions outlined in this plan. This is intended to ensure that both the international and Namibian community are aware of the economic and ecological value of black-faced impala and to develop interest and participation in the opportunities for development of black-faced impala populations on off-park land. Ethical trophy hunting and community-based tourism will continue to play a vital role in the conservation of this unique subspecies of impala in the future.

Acknowledgements:
The draft management plan for black-faced impala was funded by the Namibian Professional Hunters Association (NAPHA) and Conservation Force (USA) and was developed in collaboration with the Ministry of Environment & Tourism of Namibia. The black-faced impala research project (2000-2003) was sponsored by the Universities of Queensland and New England (Australia), Wilderness Safaris, Ongava Game Reserve, Namibia Nature Foundation, the Biodiversity Trust, Dunlop Tyres, NAPHA, Conservation Force, Erongo Mountain Wilderness Conservancy and African Wildlife Services.
Last edited by a moderator: Dec 1, 2016
Gerhard R Damm
AFRICAN INDABA - Dedicated to the People & Wildlife of Africa
You must log in or register to reply here.

The Black-Faced Impala in Namibia