Norma’s new load for the popular 6.5 Creedmoor make the most of this versatile hunting round!

In the crowded field of rifle cartridges, Sweden can boast its share of standouts. The 6.5x55, with a 6.5mm (.264) bullet in a 55mm hull, appeared in 1894. Developed jointly with Norway, it was among the first smokeless infantry rounds and defended Scandinavia for most of a century. It has no doubt killed more moose there than any other cartridge, and has won many 300-meter rifle matches. Initially pushing 156-grain bullets at 2,378 fps (29-inch barrel), “the Swede” joined the stampede to lighter, faster, pointed missiles. A 139-grain spitzer clocked 2,625 fps. Though for years 1894 and 1896 Swedish Mausers sold cheap in the U.S., the 6.5x55 wasn’t commercially loaded stateside until 1991.

The Swede had stiff competition from the 6.5x54 Mannlicher-Schoenauer, developed in 1900 for the 1903 Greek Mannlicher infantry rifle. Its military career (ending in 1941) never blessed the 6.5 M-S with a fast light-spitzer load; but its160-grain roundnose penetrated straight and deep, and like the 6.5x55, downed some very big animals. A Uganda ranger named Banks reportedly killed three elephants with a single 6.5x54 bullet. The stricken animal fell into the others; all fell off a cliff! Mannlicher-Schoenauer sporting rifles in this chambering were trim and light, and fed silkily Charles Sheldon used his for brown bears and moose as well as Alaska’s sheep. Kenyan Warden Blaney Percival did most of his hunting with one, though it twice failed. The second jam occurred as a lion charged – but dashed past Percival to chase his gun-bearer. Luck was with the boy, as the cat, spent in the rush, died atop him. 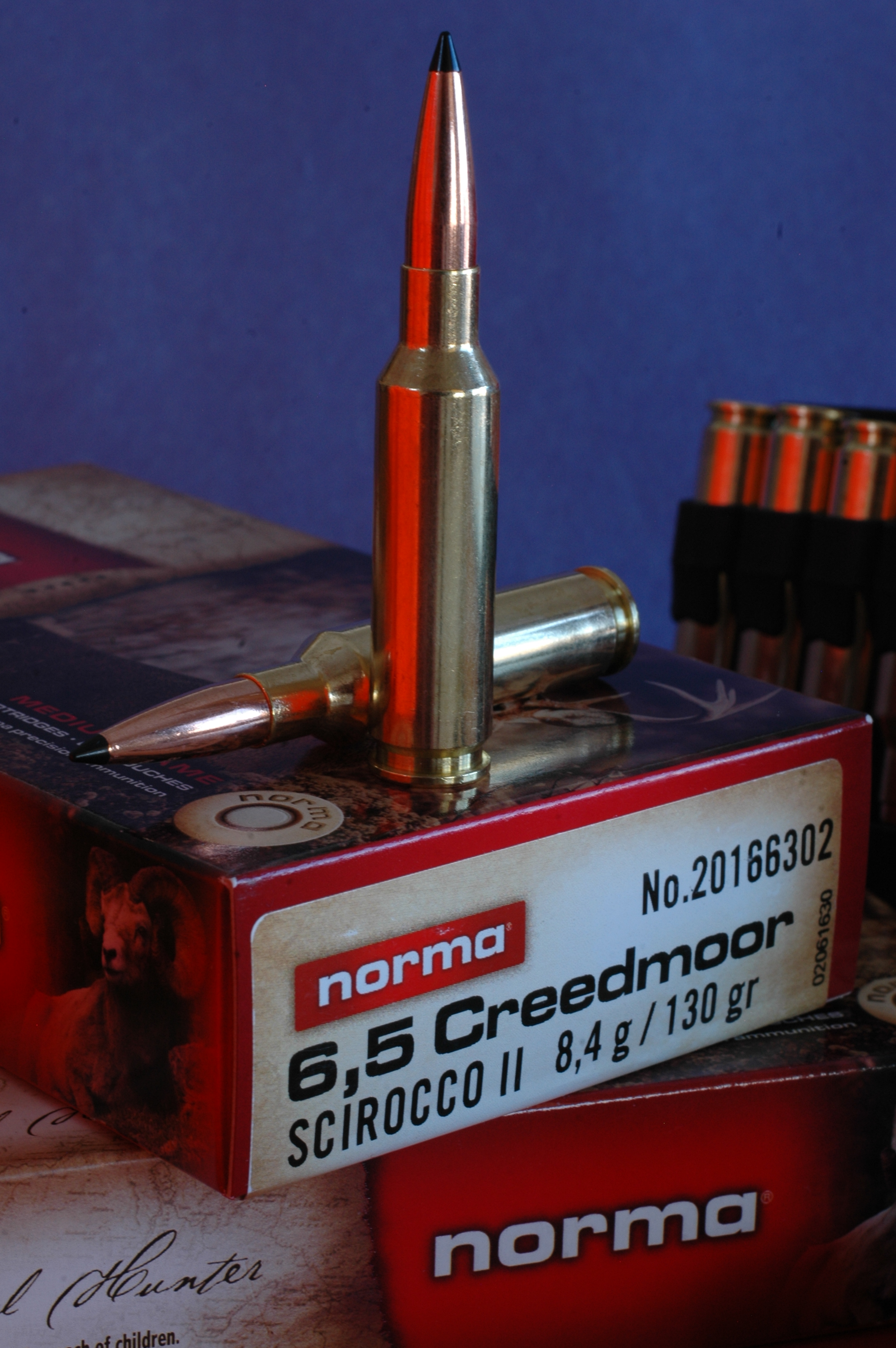 Sweden’s 6.5x55 would outlive the 6.5x54 M-S in sporting rifles (Norma still loads both!). The Swede – indeed the .264 bore – has a fresh glow stateside, following decades of tough competition from 6mms and 7mms at market. During that era, Sweden’s premier ammunition company grew up. In 1902 Norma had one employee tending two machines in a shop in Amotfors, a rural town hemmed by forests and lakes. In 1911, five years after political bonds joining Norway and Sweden frayed, Norma built a new factory. War prompted more construction, and by 1942 Norma’s workforce had grown to 800. By 1950 it was exporting hunting ammunition. Updated machinery hiked efficiency. By 1967 Norma was shipping 64 million rounds annually! It had also announced the .308 and .358 Norma Magnums, powerful belted rounds that by some measures trumped the U.S. competition.

Norma would develop other cartridges for range and field: its 6mm BR and 6.5/284, the .300 and .338 Norma Magnums. It would also introduce families of cartridges well-liked by U.S. hunters. Kalahari and American PH complemented African PH loads as Norma-USA established an office to serve the U.S. market. One recent offering is still new to North American riflemen, but has deep roots in U.S. history….

During westward expansion in the late 1800s, buffalo hides sold for up to $50. Ambitious hunters could earn $10,000 a year with rifles like Remington’s Rolling Block. “Brazos Bob” McRae claimed 54 buffalo with as many shots at a single stand with his .44-90 Remington and Malcolm scope! The accuracy and reach of such rifles suited them to long-range competition. In 1874 Remington engineer L.L. Hepburn began work on a match rifle to beat the Irish squad, which, after a recent Wimbledon victory, had publicly challenged “any American team.” The six members of each team would fire at 800, 900 and 1,000 yards, 15 shots per distance. The young National Rifle Association, with the cities of New York and Brooklyn, each put up $5,000 to build a new range on Long Island’s Creed’s Farm, courtesy the State of New York. 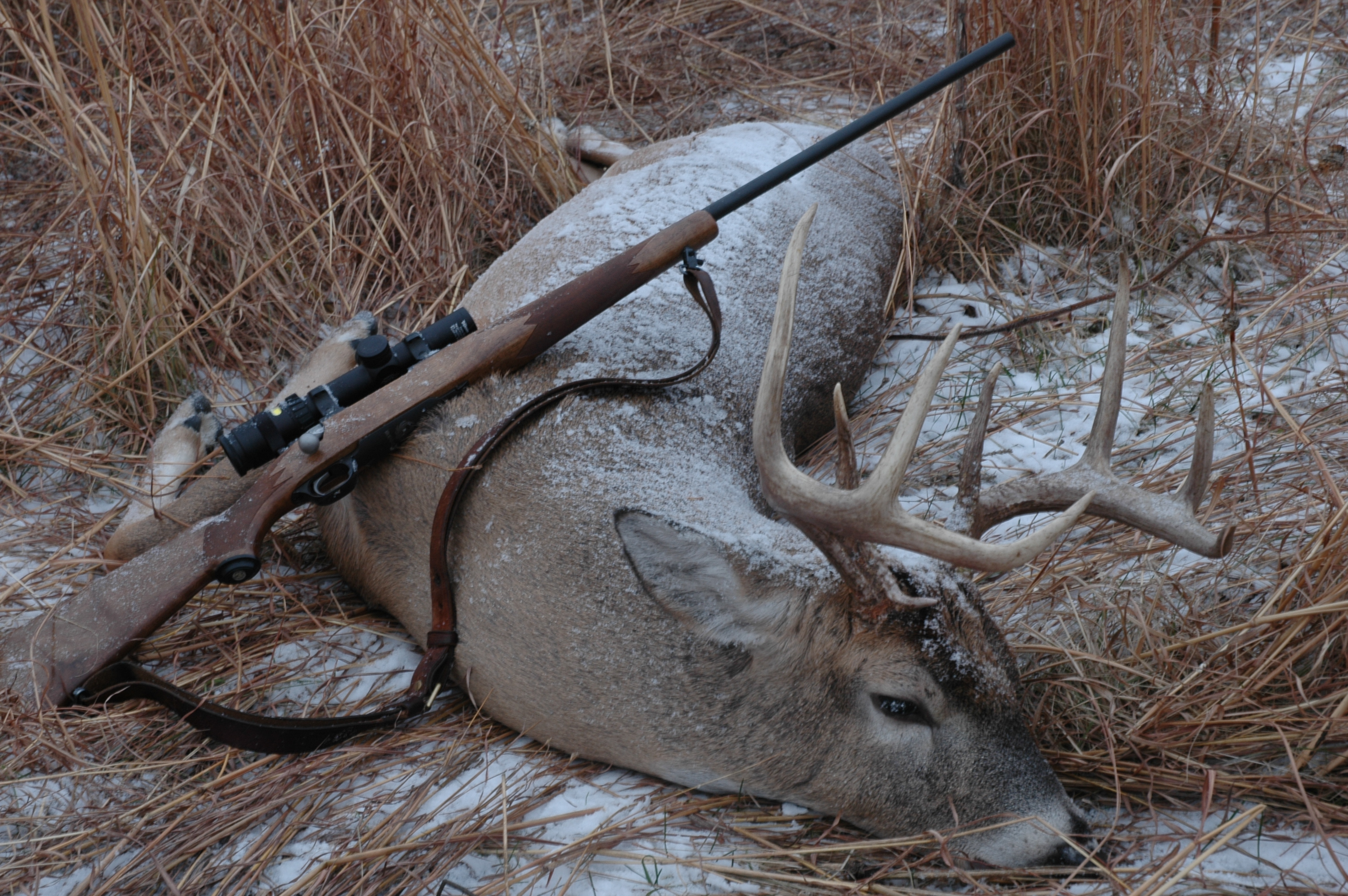 Remington’s target rifle, a .44-90 hurling 550-grain conical bullets, appeared in March, 1874. In September the favored Irish team bowed to the Americans and their Remington and Sharps breechloaders. The U.S. won again in 1875 and 1876, Remington “Creedmoor” rifles posting the highest scores.

In 1878 military-style Rolling Block rifles (shipped by the thousands to other countries) listed for $16.50, sporters for $30. Optional features attracted hunters and target shooters. A single-set trigger cost $2.50. Beyond 26 inches, barrels to 34 inches added 50 cents per inch. Rifles for long-range competition, with heavy barrel, tang sight, set trigger and checkered stock, were expensive; 140 years ago Creedmoor-type Rolling Block rifles started at $100!

The Rolling Block persisted into the era of high-velocity bottleneck cartridges. It chambered the likes of the 7x57, .30-40 Krag and .303 British. A .22 rimfire version outlasted centerfires; it expired in 1933. But original Creedmoor rifles are exceedingly rare. Only about 500 were built, between 1873 and 1878. The Creedmoor name endured, to define traditional long-range matches. In 2009 it got new life as the moniker of a fast-stepping hunting/target cartridge.

Dave Emary, senior engineer at Hornady and accomplished 1,000-yard marksman, tapped fellow competitive shooters for ideas on a compact round with long-range potential. He then necked the .30 T/C to .264. The shoulder on this case is well to the rear, so long bullets with high ballistic coefficients can be used in short actions. Though the 6.5 Creedmoor has much less powder capacity than the .270 Winchester and can’t match .270 exit speeds, 130-grain Scirocco II bullets from Norma’s Creedmoor load will pass most 130 .270s at extreme range, and better resist wind drift! The efficient Creedmoor case and its modest powder charge deliver hard hits on big game while keeping recoil modest. 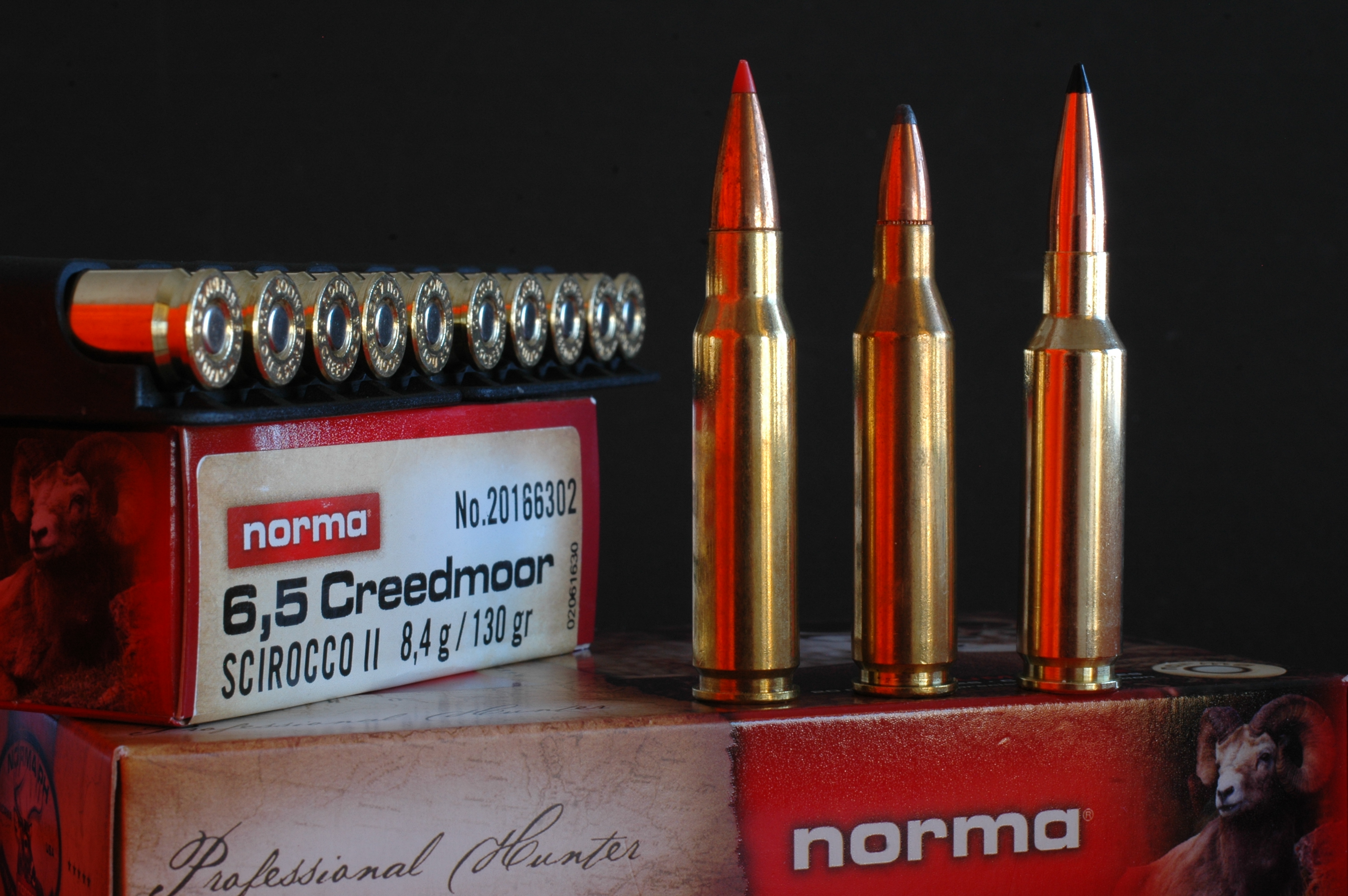 I learned about the 6.5 Creedmoor by way of a rifle from Todd Seyfert at Magnum Research. The Remington 700 action wears a carbon-fiber barrel with a Kreiger stainless core. GreyBull Precision added a stock and a modified 4.5-14x Leupold scope. Its 1/3-minute elevation dial is calibrated specifically for 130-grain boat-tail spitzers at Creedmoor velocities. “Spin the elevation dial to the distance in yards, and aim dead-on.” said GreyBull’s Don Ward. Prone with a sling, I was soon banging steel at 500 yards.

By the charts, the 6.5 Creedmoor is a superb cartridge for deer-size game. But I caught only a late elk season with this new rifle. The 6.5x55 and .260 had taken elk for me; surely the Creedmoor would as well. Alas, the close shot I’d wanted, to ensure precise bullet placement, didn’t come. When on the final evening Don and I spied a bull far off, there was no approach. “Your call,” he shrugged. “The air is dead-still.” I snugged the sling, prone, and dialed to the yardage. Ribs spot-lit by a sinking sun, the bull paused. Craaack! The animal spun, sprinted and fell. That shot was twice as long as any I’d ever attempted at elk.

Whitetail hunting with a Ruger 77, then a trip to sub-Saharan Africa with a T/C Icon, kept the 6.5 Creedmoor in my ammo pouch. The T/C dropped a vaal rhebok at 250 yards, in stiff wind. Shorter pokes on a variety of game produced consistently quick kills. I found the Creedmoor’s limit with an eland.

The shot angle was near-perfect, my bullet ranging from mid-rib to off-shoulder. But eland bulls can weigh a ton, and if this one fell shy of that mark, I couldn’t tell by its track or tenacity. Great splayed prints led uphill into heavier thorn. An hour passed; trailing became difficult. Then: spiral horns above the canopy! I raced forward. The bull dashed into a canyon, to re-appear at nearly 200 yards, lunging up the far side. Clutching the rifle to my tracker’s sticks offhand, I fired. Behind! I flicked the bolt, shot again as the bull vanished. We found him dying. My last bullet had had driven forward, severing the dorsal aorta near the spine. A lucky shot. The first hit would have proven fatal; but damage to those enormous lungs was insufficient to kill quickly. Another hunter on that trip lost an eland to the 6.5. 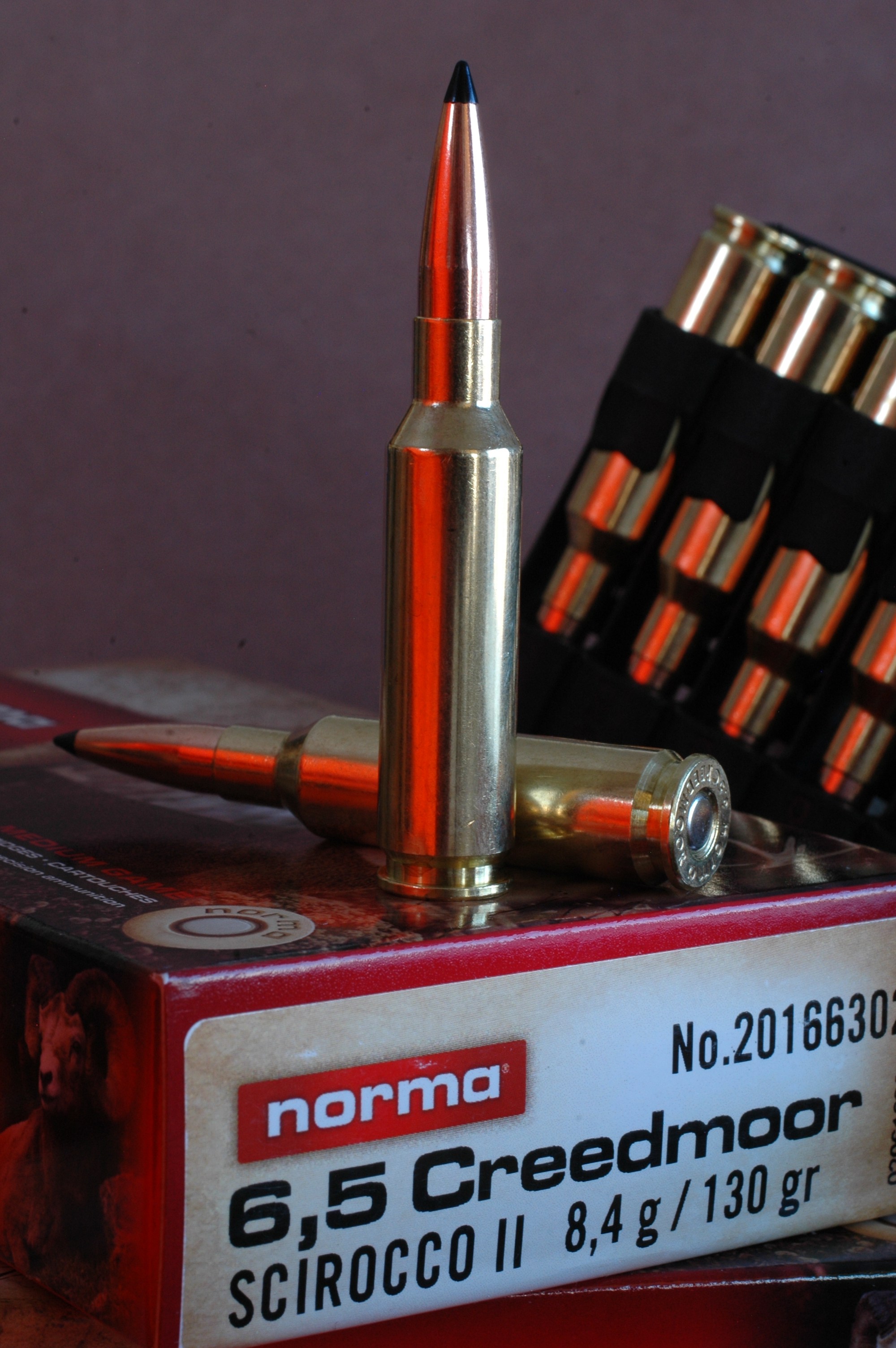 Since then, I’ve seen several animals brought to bag by the 6.5 Creedmoor. And I’ve used it in a variety of rifles on paper and steel targets to 1,200 yards. It has become one of my favorite cartridges for deer-size game. Its mild report and recoil make it easy to shoot accurately. It seems an inherently accurate cartridge too. I’ve punched half-minute groups from production-class rifles. The proliferation of hunting loads for the 6.5 Creedmoor includes none better than Norma’s 130-grain Scirocco. This sleek, polymer-nose bullet, with its 15-degree boat-tail and a ballistic coefficient over .550, flies very flat. In expansion and penetration tests, it opens reliably down to 1,750 fps, and drives straight and deep. A bonded bullet, it stays in one piece after high-speed impact, routinely retaining more than 80 percent of its original weight.

There’s no magic in bullets .264 in diameter. But since Sweden blessed hunters with the 6.5x55 many decades ago, 6.5s of modest capacity have proven capable in long-range competition, and lethal on game some hunters think can be taken only with magnums. The 6.5 Creedmoor may be the best of the lot, with a hull that brings long bullets into short rifle actions. Norma’s rich history with 264-caliber rounds – including current loads for the 6.5x55, 6.5x54 M-S, 6.5 Carcano, 6.5 Arisaka (Jap) and 6.5/284 Norma – shows in its selection of the 130-grain Scirocco hunting bullet. For deer rifles, there’s arguably no better load. Hunters may find it a lethal pick for elk-size game too!

The ascending popularity of the 6.5 Creedmoor should come as no surprise. Norma’s newest load makes this fine cartridge even more useful!


Note: “Chart” velocities were not available at this writing; 2,800 fps is reasonable muzzle velocity for 130-grain hunting loads. Drift values are for the Scirocco in a 10-mph full-value wind. 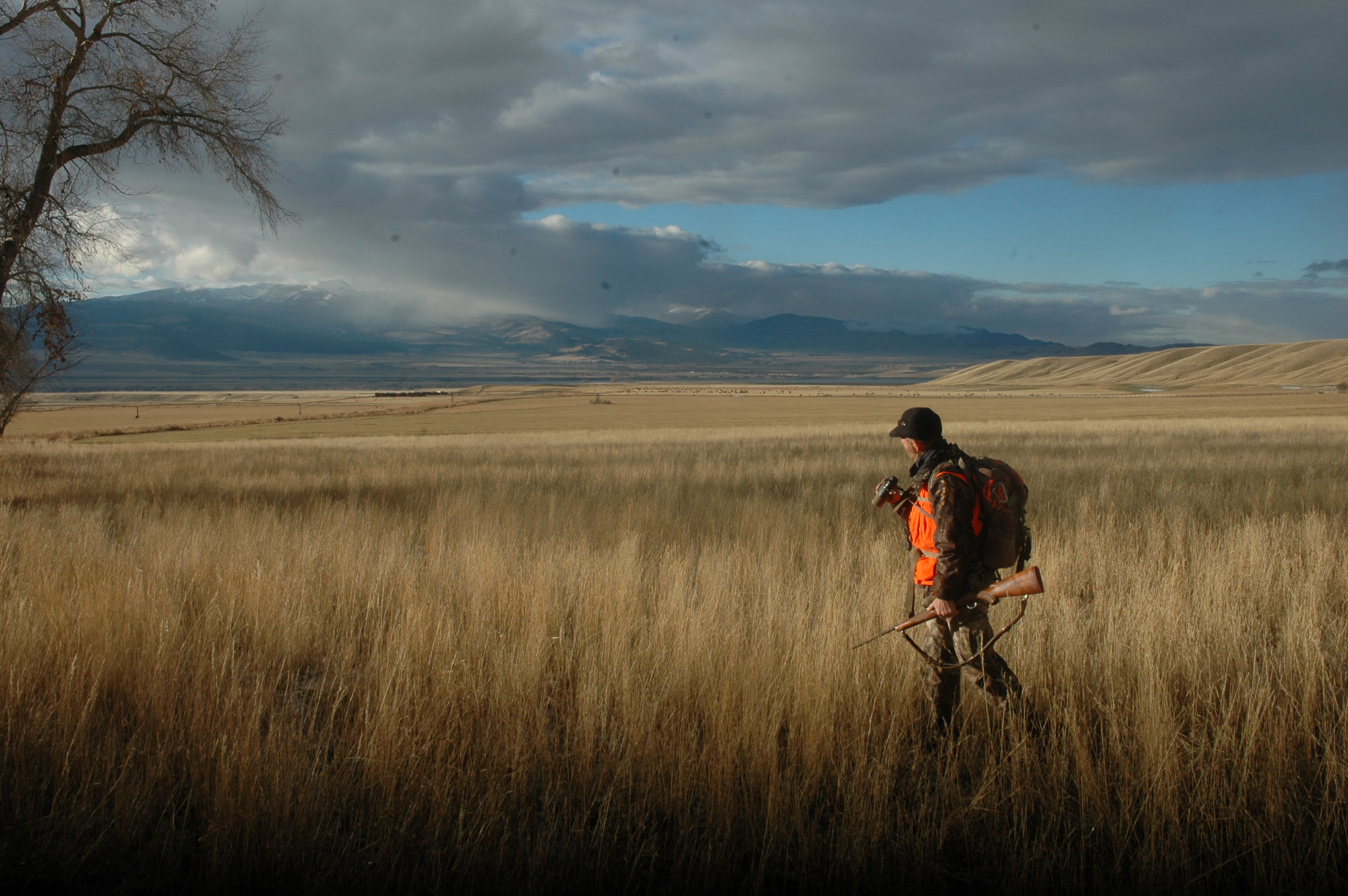 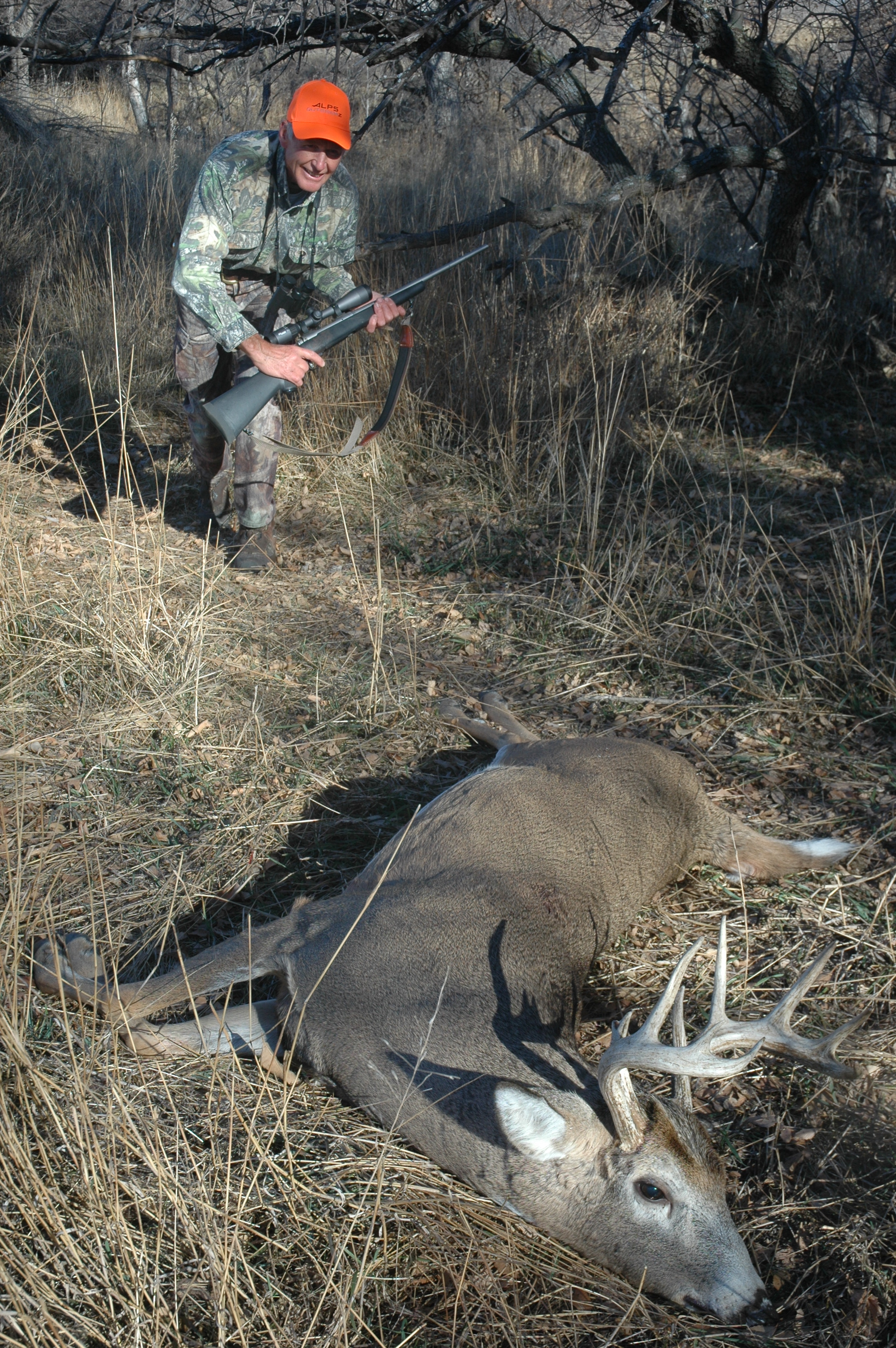 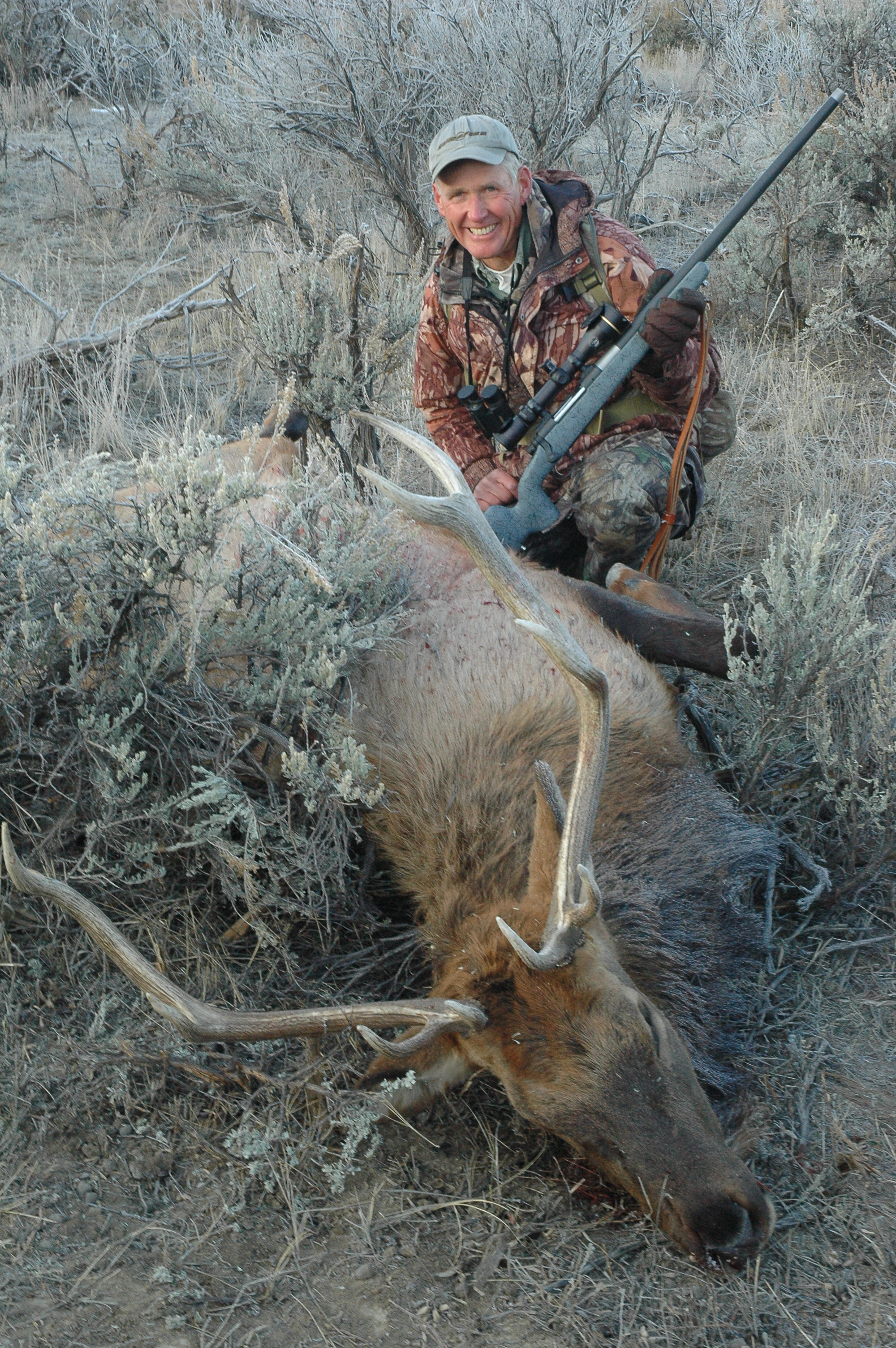 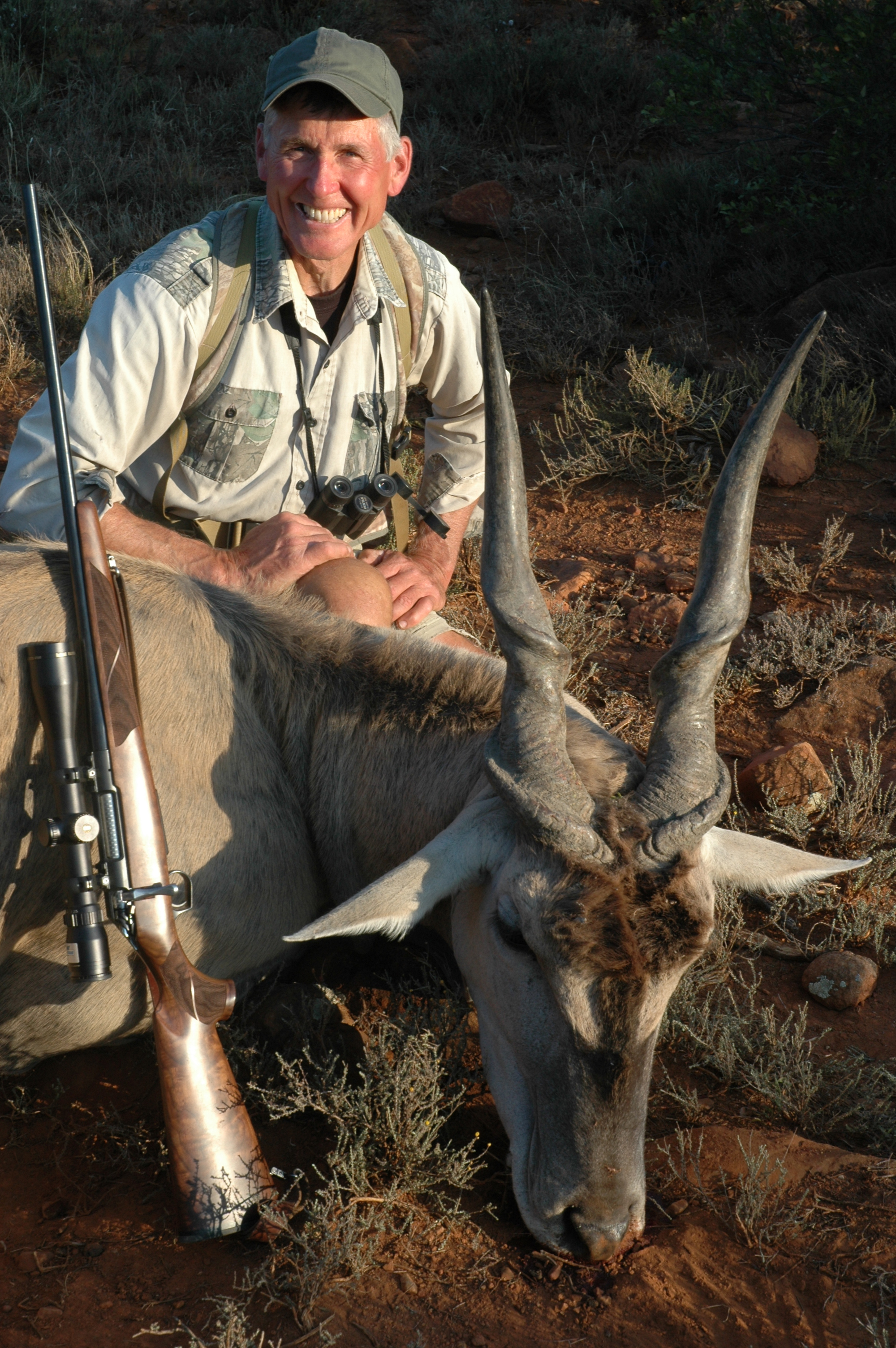 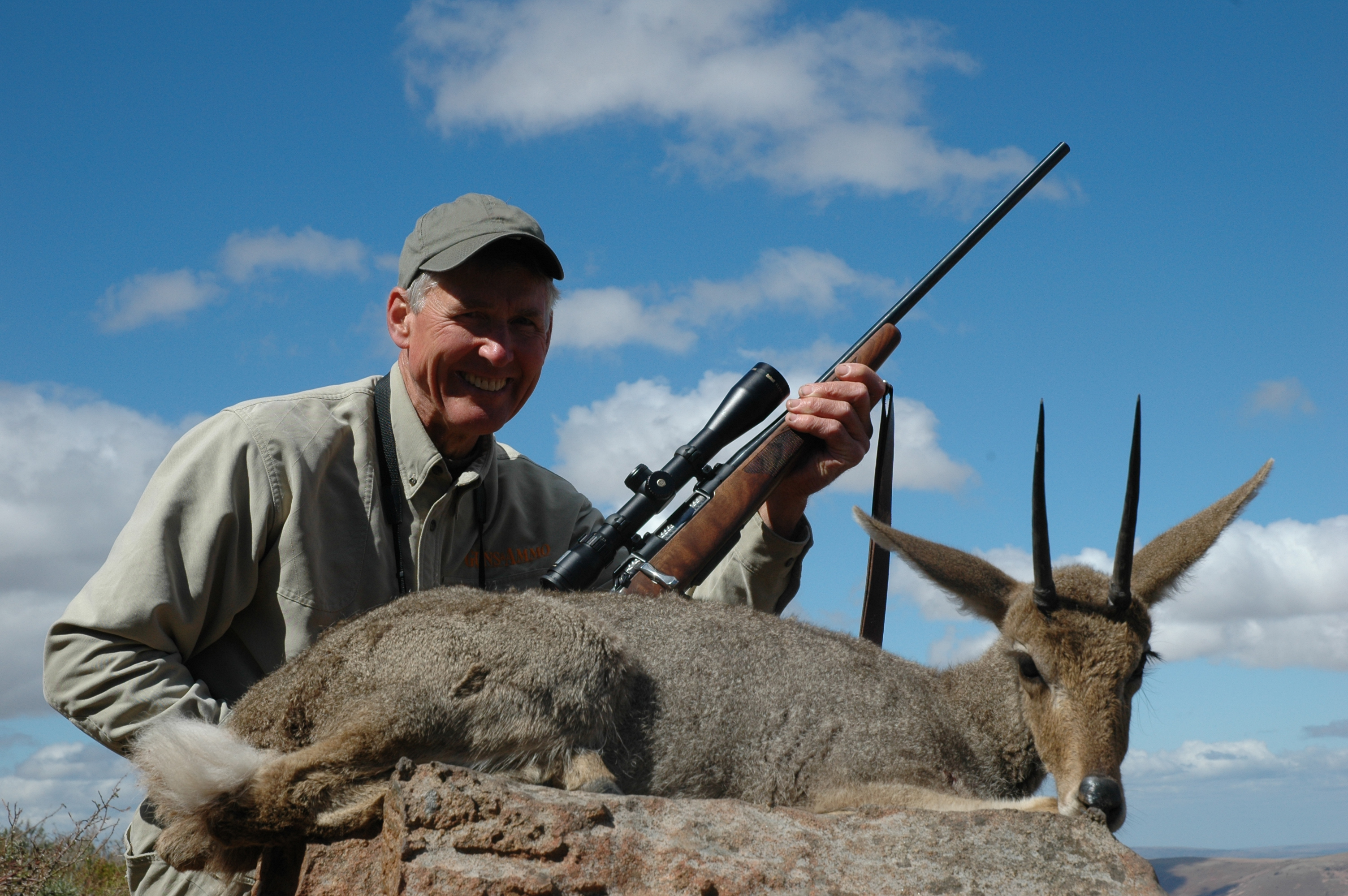 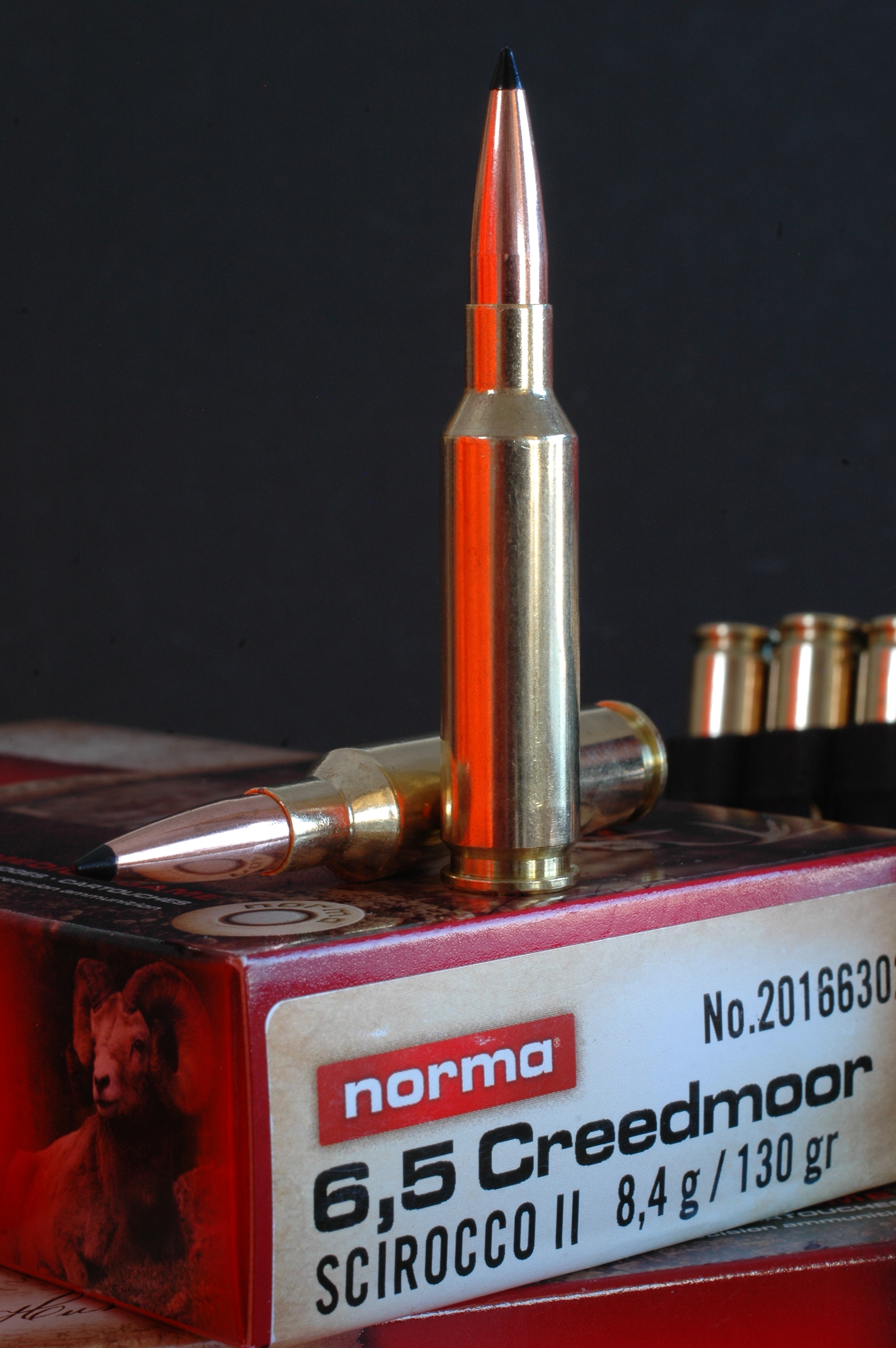 2 – Wayne killed this fine whitetail with a Ruger Hawkeye in 6.5 Creedmoor. It’s a superb deer cartridge!

6 – Light recoil, inherent accuracy and flat trajectory suit the Creedmoor for country like this, in Montana.

7 – Offhand at 100 yards, Wayne ended his still-hunt with a borrowed left-hand Savage in 6.5 Creedmoor.

11 – The short efficient hull brings to mind the 6.5/250 Savage Improved, an obscure but useful wildcat. 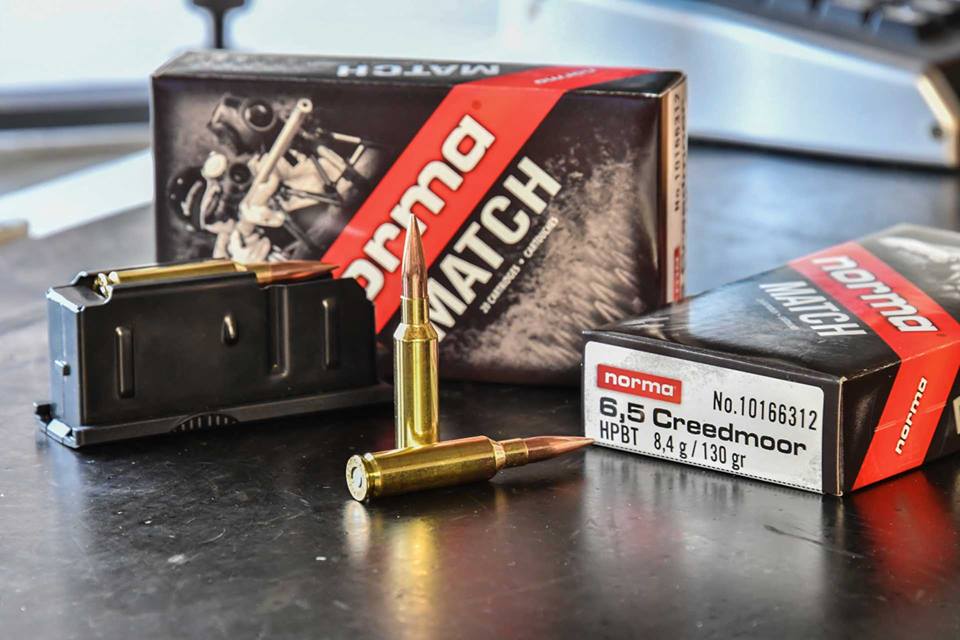 Yeah, as you imply, at normal hunting ranges the other 6.5s and the .270 WCF are the better cartridges. There’s also the 6.5 Carcano.
W

I shot and killed a buck at 171 yds this past week using the Norma Supreme with the 130 gr. Scirocco II bullet. Very accurate and could not believe the terminal destruction of the bullet on the deer. When hit the deer was DRT ! Took out heart, part of lungs and demolished the far shoulder. It was like a 7mm Mag has hit that animal.
W

That is going to be my next ammunition buy if I can find it. Heard good things about it. 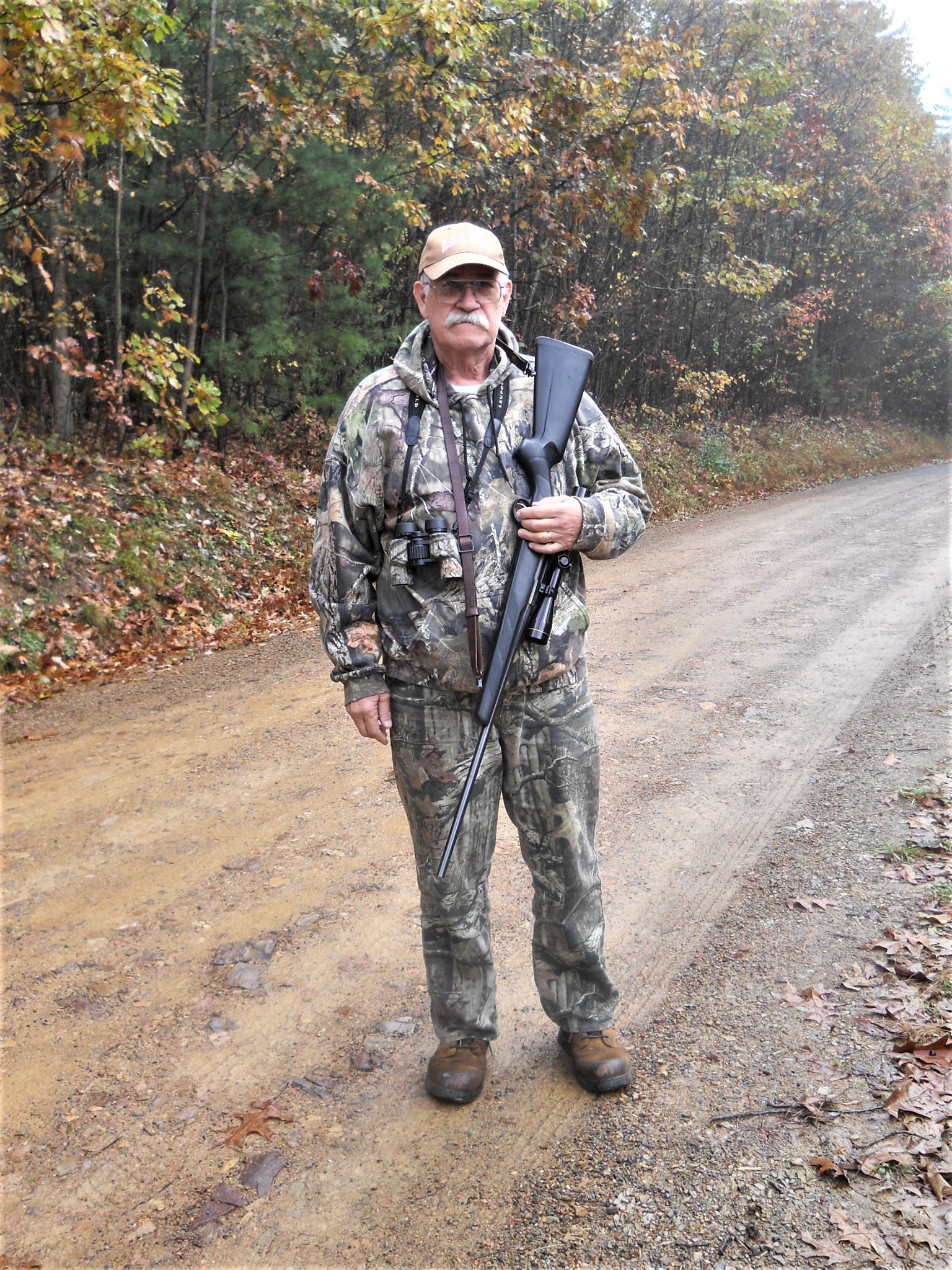 Last edited by a moderator: Dec 7, 2020
You must log in or register to reply here.