There was a time, though it may seem inconceivable now, where the selection of safari ammunition was extremely limited, at best. After WWII, Kynoch – the predominate supplier of Nitro Express cartridge ammunition – was in serious trouble, and fodder for the classic pre-war double rifles became simply unavailable. What little supply existed was hoarded and cherished, but many rifles sat in the rack, silent and untouched. The bespoke rifle era was all but over, and the mass-production era and its mentality had made its way into the rifle world. Now, it wasn’t necessarily a bad thing, all around; Winchester had the forethought to fill the void by producing both rifles and ammunition for the .375 H&H Belted Magnum – an undeniable classic – and their own proprietary .458 Winchester Magnum. The latter was built around the H&H belted case, shortened to 2.500”, blown out to hold the .458” bullets of the .450 3 ¼” Nitro Express, and – at least on paper – match the muzzle velocity of the .450 NE; that formula of a 480-grain bullet at 2,150 fps was revolutionary and became a staple in the dangerous game fields, yielding just under 5,000 ft.-lbs. of muzzle energy. 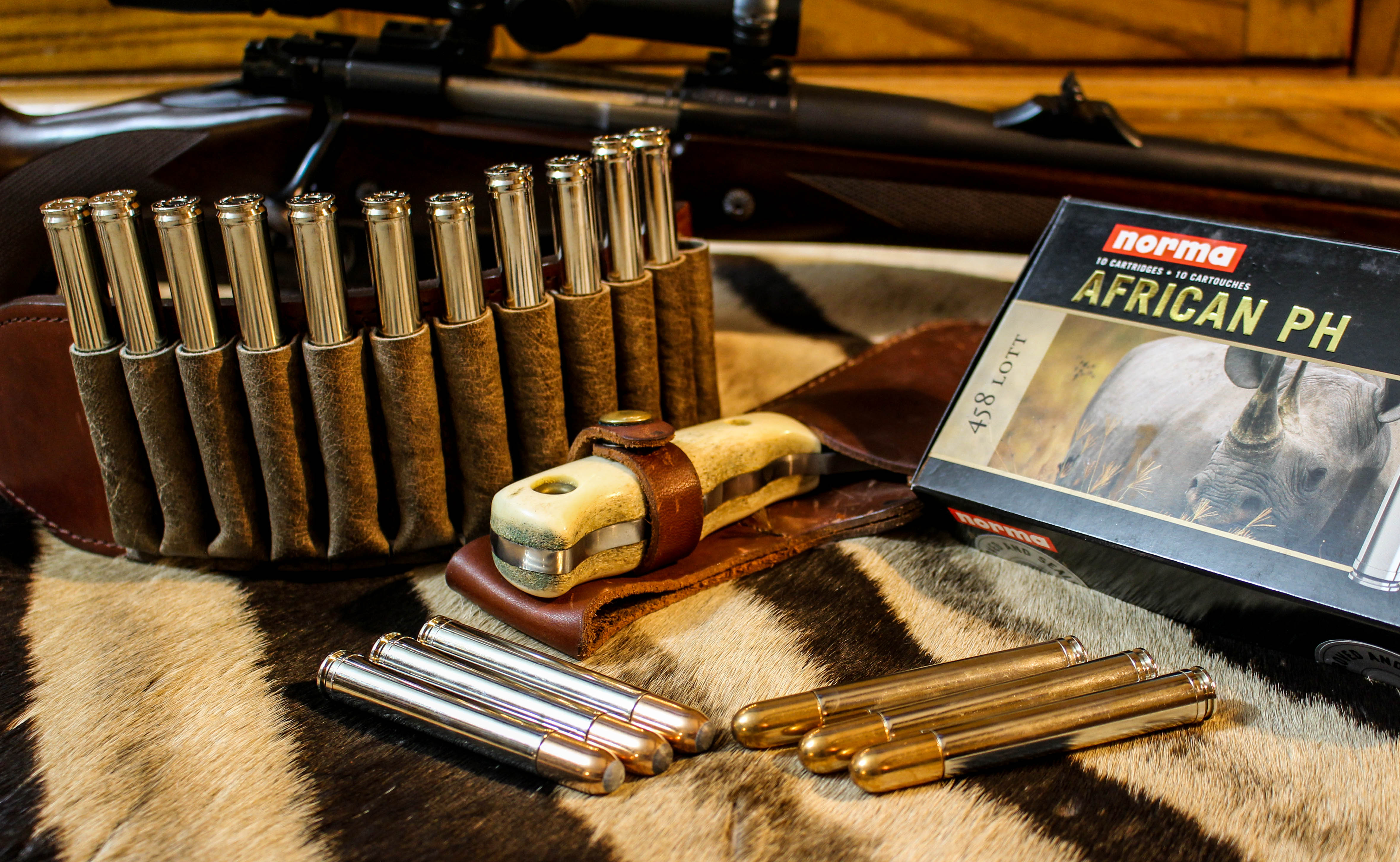 An undisputable big game stopper, the .458 Lott improves the ballistics of the .458 Winchester and .450 Nitro Express. It is a perfect choice for the big game hunter who prefers a bolt-action rifle.

The Model 70 African rifle was a solid design, complete with a Mauser-based controlled round feed action, and horizontal three-position safety, but the .458 Winchester Magnum cartridge wasn’t what was intended. Reports came back from the field of seriously low velocities and poor penetration, some reports – whether credible or not is unknown – stated that bullets were actually bouncing off of elephants. The problem was the powder capacity, and while I can attest to the modern loads having resolved the problem, it was a serious issue at the time, especially considering the fact that the only other suitable cartridge was the much-lighter .375 H&H. 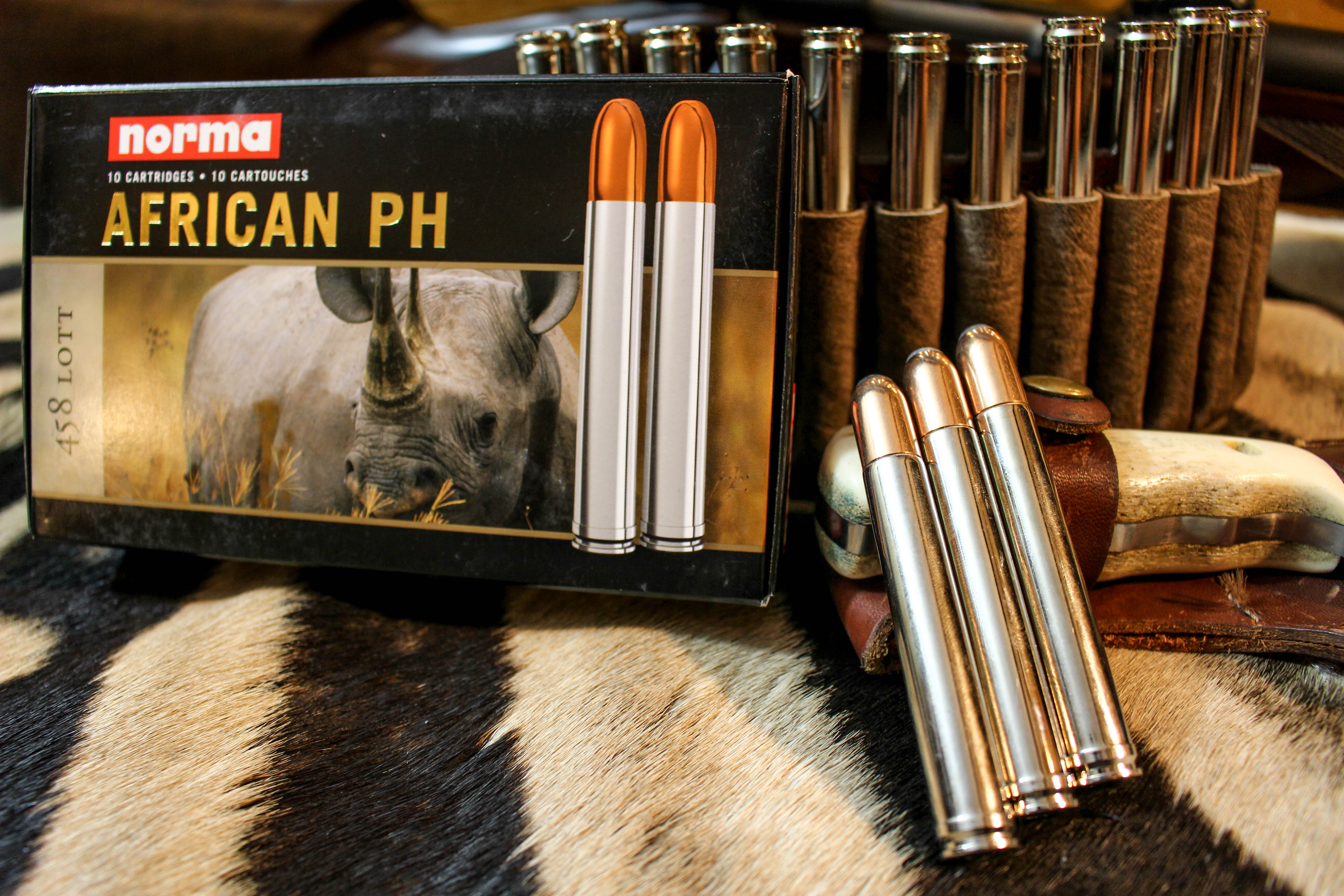 The 550-grain Woodleigh Weldcore softpoint is perfect in the .458 Lott, as loaded by Norma in its African PH line. Cruising at 2,100 fps, these heavy bullets are perfect for the large beasts.

One of the hunters who experienced such an issue was one Jacques P. Lott, better known as Jack. An encounter with a Mozambican Cape buffalo, and some less-than-desirable .458 ammunition led to a battered, airborne, bruised and bleeding Mr. Lott. His mind got to working, and he realized that using the full-length H&H case rather than the shorter Winchester case would give more room for powder, and thereby better velocities. He worked some .375 H&H brass, but the process left Mr. Lott’s cartridge a bit shorter than the H&H length of 2.850”, leaving the Lott case measuring 2.800”. 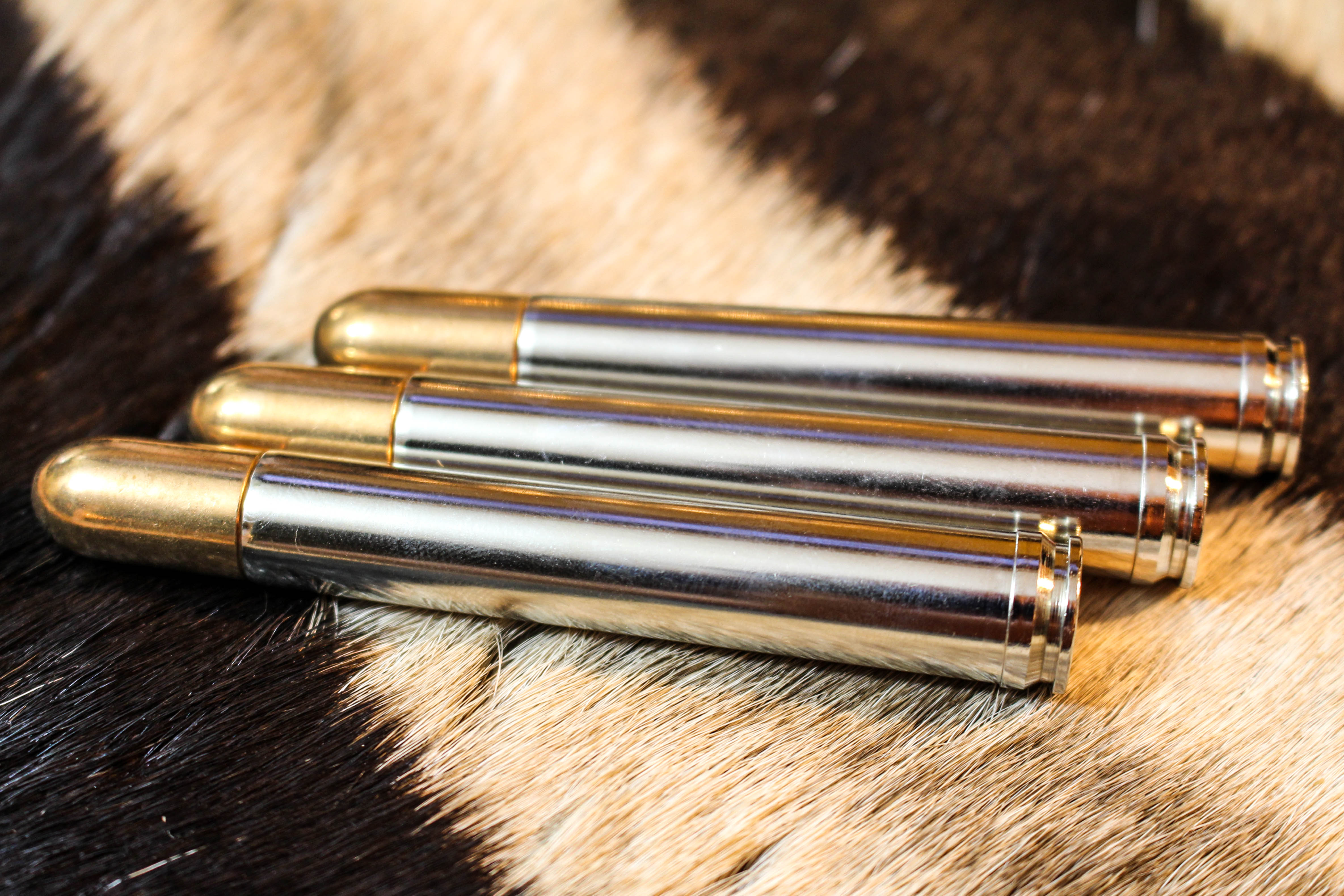 For an elephant hunter, or for use as backup on Cape buffalo, it’s very hard to argue with the 450-grain Woodleigh Full Metal jacket. Norma loads the 550-grain slug in its African PH line, and it is wonderful stuff.

From the time that buffalo sent Mr. Lott spinning through the atmosphere, three decades would pass before his .458 Lott would be offered as a commercial cartridge. Nonetheless, it was a welcome addition to the lineup of dangerous game cartridges. There was a resurgence of big bore cartridges in the late 1980s, including the .416 Rigby and .470 Nitro Express, as well as the developments of the .416 Remington Magnum and .416 Weatherby Magnum. But the .458 Lott made perfect sense as a big game rifle for a traveling sportsman, as well as a stopping rifle for Professional Hunters. As an added benefit to the design, ammunition for the .458 Winchester can be fired safely in rifles chambered for the .458 Lott, as it shares the same case dimensions with the exception of length. The final SAAMI-approved Lott launched a 500-grain bullet at muzzle velocity of 2,300 fps – quite an improvement over the actual measured velocities of the .458 Winchester Magnum – and it showed its worth against buffalo, elephant and hippo. Many writers have opined that the .458 makes the best bolt-action elephant cartridge, and I have seen its benefits regarding the African Cape buffalo. My good friend Dr. Mike McNulty has a tricked out Ruger RSM in .458 Lott that he absolutely loves for dangerous game; with it he crumpled a Cape buffalo cow with one well-placed Woodleigh Weldcore. The slug penetrated perfectly, and had the high weight retention that the Weldcore is famous for. 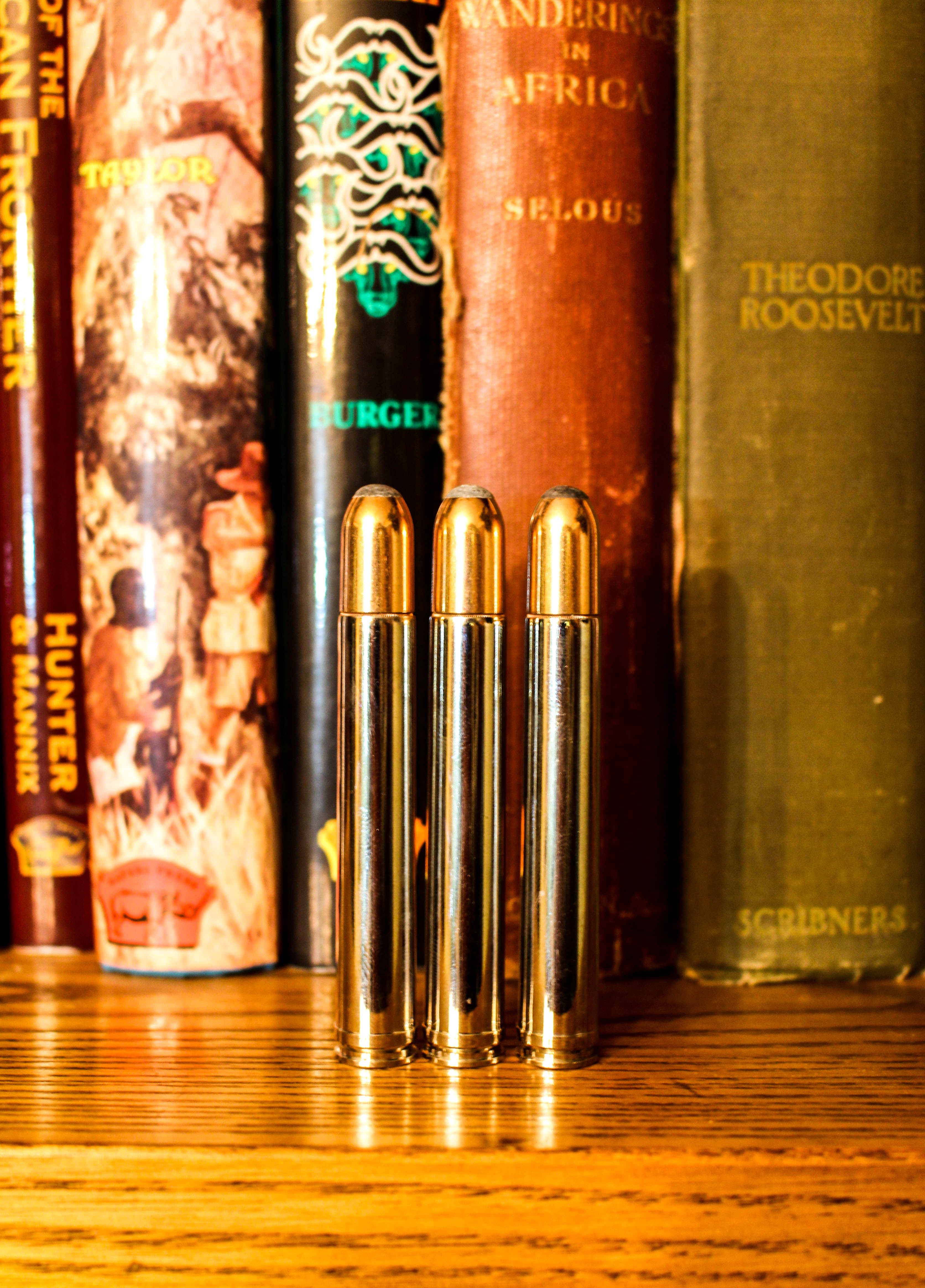 The author is convinced that the .458 Lott would have made the famous hunters of a century ago very happy. It offers fantastic, reliable performance from a bolt-action rifle.

Recoil is not slight, but exactly terrible either. If you’re familiar with the recoil of the big bore rifles, and know the proper technique to deal with that recoil, the Lott will not punish you. Headspacing off the belt (one of the few belted cartridges that actually do), it feeds smoothly and reliably, and being of a smaller diameter than cartridges the likes of the .416 Rigby, magazine capacity was increased. What the .458 caliber cartridges lack in reach, they make up for in horsepower, and the Lott is no exception. A 500-grain slug launched at 2,300 fps yields just under 5,900 ft.-lbs. of energy, and those bullets offer excellent penetration, even on the pachyderms. While that is a fantastic formula, Norma – in its African PH line of ammunition – offers both the 550-grain Woodleigh Weldcore softpoint and the 550-grain Woodleigh FMJ at a muzzle velocity of 2,100 fps, for over 5,300 ft.-lbs. of muzzle energy. If you’re interested in stopping things, dangerous things, well, just about anything, this is a combination with which to do so. In my experiences with this ammunition line, in a wide variety of calibers including the .458 Lott, it is very accurate. 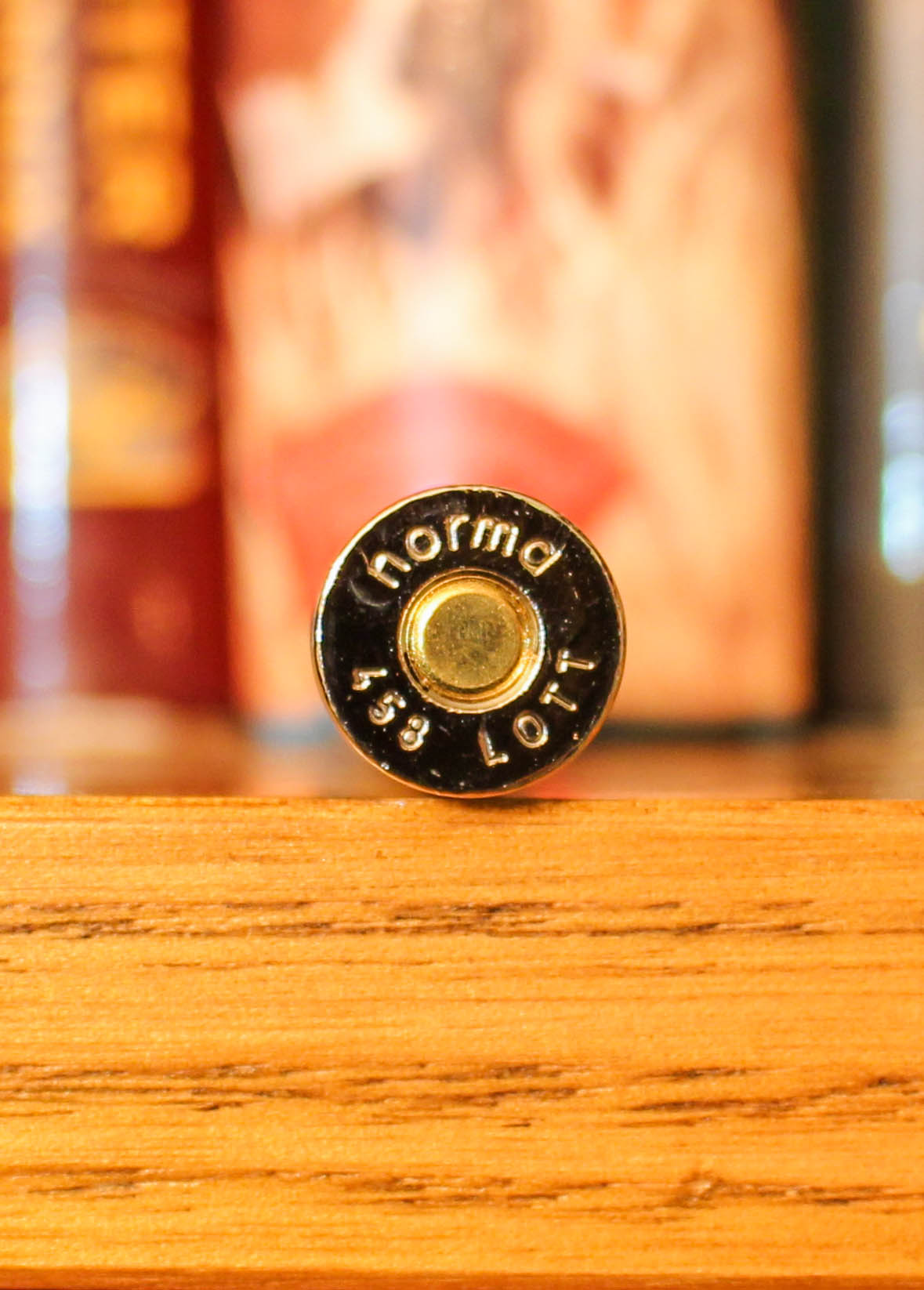 The famous ‘norma’ headstamp is synonymous with quality, dependability and reliability.

When I think about a bolt-action stopping cartridge that won’t detach a retina or crack a molar, I think of the .458 Lott. It offers both the bullet weight and velocities necessary for dangerous game work, without the hellacious recoil of the .500s. It can be housed in a reasonably compact action, making for a well-balancing rifle; this can be paramount to quick, accurate shooting. It will work well with a 22” barrel, keeping the overall package concise for those hunts in the thick bush where elephants seek seclusion and wounded buffalo love to head.

I truly believe that if the old-time elephant hunters like John ‘Pondoro’ Taylor, Harry Manners, and the like could’ve spent a season with a well-tuned .458 Lott, they’d have returned from the bush a convert. If you’re shopping for a dangerous game gun, keep the Lott high on the list of considerations; I don’t know a single Professional Hunter who wouldn’t be happy with a client who showed up in camp with a rifle chambered for the Lott that he or she shot proficiently.

Nice article Phil!
You must log in or register to reply here.