The first .416” diameter bullets saw the light of day in 1911, in John Rigby & Company’s proprietary cartridge, the .416 Rigby. It was initially loaded with cordite, the popular propellant of the day in early twentieth century Britain, and a large ring Mauser receiver was necessary to house the voluminous case. Truth be told, the bullet diameter and cartridge didn’t catch on immediately. It sort of clambered along, despite being praised by John ‘Pondoro’ Taylor in his famous African Rifles and Cartridges. The .416 Rigby and the all of today’s .416” bores owe their sustained existence to Robert Ruark’s 1953 safari gem Horn of the Hunter, in which he documents Professional Hunter Harry Selby’s proficiency with the left-handed .416 Rigby he was using due to the fact that his double .470 was in the repair shop. Hunters quietly collected the .416 Rigby, and even Jack O’Connor, renowned for his love of lighter, speedier cartridges, used one with great effect in Africa.

However, the 1960s saw the demise of Kynoch ammunition, which produced most of the ammunition for the British classic cartridges, and that created a serious problem: many cartridges that were most useful against African dangerous game were simply unavailable. The .450 Nitro-Express, the king of the doubles, began to fade quickly, as did many of the other flanged double rifle cartridges.
The American firm of Winchester answered the call (at least in theory) by developing the .458 Winchester Magnum, suitable for their bolt-action rifles. Designed to propel a .458” diameter 500-grain projectile at 2,100 fps, in a case based on the .375 Holland and Holland Belted Magnum shortened to 2.500”, their intention was to mirror the performance of the .450 Nitro. The .458 Winchester did just that. Well, almost. Initial reports didn’t bode well, but I believe that had more to do with the ammunition than the design. I will go on record saying that the .458 Winchester suffers from a lack of case capacity, but some of our modern powders have solved that problem.

This left hunters of the 70s and even 80s with two affordable choices for a big game rifle: the .375H&H and the .458 Winchester. While both of these are irrefutable classics, the difference between them left a gap. The .375 H&H has a milder recoil than the does the .458, but it is traditionally loaded with 300 grain bullets as the heaviest available. The .458 has the bullet weight on its side, but comes at the price of heavy recoil; so heavy that few visiting hunters could effectively shoot it well, and numerous PHs recommended sticking with the .375 bore.

Wildcatters started to tinker with the .416” diameter bullets in different cases. The .416 Taylor, which is a .458 Winchester case (2.500” long) necked down to hold the .416 bullet, and it is a great cartridge, yet remains a wildcat. Developed in the 70s by Robert Chatfield-Taylor, it is a .30-’06-length .416 that is fully capable of taking all dangerous game. Likewise, a forward thinking gentleman by the name of George Hoffman, one of the few American Professional Hunters in Africa, had the brilliant idea of mating the full length .375 H&H case with the .416” diameter bullets, and thank goodness he did! The wildcat .416 Hoffman was born.
The Hoffman propelled the 400 and 410-grain bullets of the .416 Rigby to a velocity of 2,400fps, exactly on par with Rigby ballistics, yet out of a simple-to-manufacture rifle, using a very common case head diameter and 2.850” case length. The good Mr. Hoffman had excellent results with his brainchild, having no lack of killing power or penetration on the toughest and biggest game that Africa has to offer. However, his wildcat remained just that: a wildcat that few people embraced. It was, and still is, a perfectly viable cartridge. I have clients that ask me to load .416 Hoffman for them, and they enjoy using their rifles to this day.

Remington, a company who has made a reputation out of legitimizing the bastard children of the shooting world, picked up on the Hoffman concept. In 1988, the year I graduated high school, I remember the buzz about Remington’s new baby: the .416 Remington. Based (loosely) on the 8mm Remington Magnum (which was a derivation of the .375H&H), the new Remington case bears a very strong resemblance to the .416 Hoffman. In fact, they are so close in dimension that .416 Remington ammunition can be safely fired from the slightly larger .416 Hoffman chamber, but the reverse is not true. The Hoffman case has a slightly larger case capacity than the Remington variety. This commercially produced cartridge closed the gap by blending the trajectory of the .375 H&H with the high kinetic energy of the .458 Winchester.

Ballistics are virtually identical between the Hoffman and the Remington; both driving the 400-grain bullets at a muzzle velocity of 2,400fps. What they do different than the Rigby case is use roughly 80% of the powder charge required for the Rigby. My .416 Remington, which is housed in a bolt-action Winchester Model 70, uses 78.0 grains of powder to arrive at 2,400 fps, while my .416 Rigby needs an even 100 grains of powder to get to the same velocity. This is simply explained, and both have their benefits and downsides. Allow me to compare and contrast for a bit. 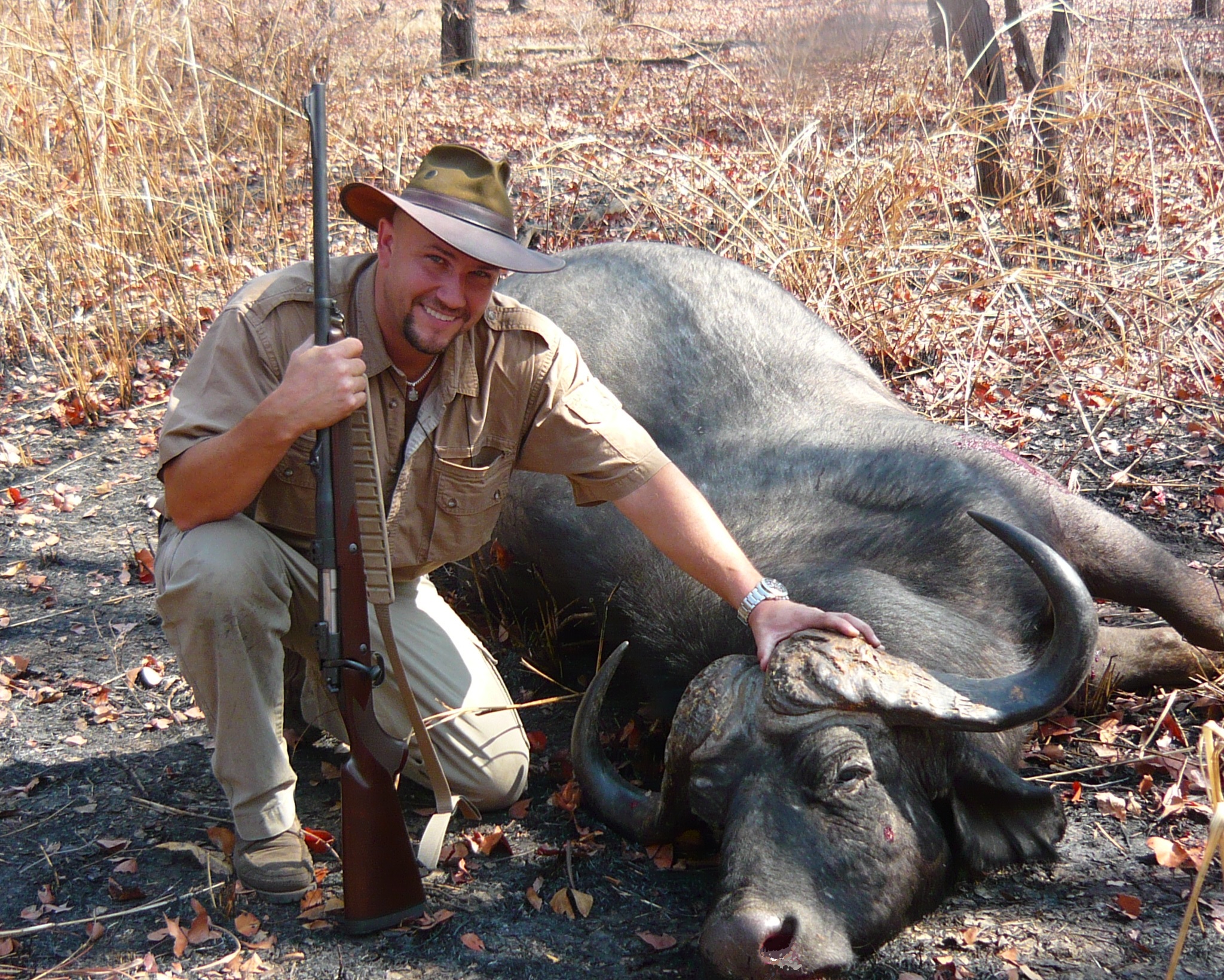 The new Remington design used a 25-degree shoulder and headspaces off the belt; the Rigby case is beltless and headspaces off the steep, almost 45-degree shoulder. The Rigby case, designed for and developed with cordite - a powder made in long, spaghetti-like sticks - was designed to be so large to combat the high pressures that the heat of the tropics can generate. I should note that the extreme heat of the African tropics has a much, much more pronounced effect on cordite (now completely obsolete) than it does on our modern smokeless extruded single and double based powders. In 1911, with only cordite available, John Rigby and Co. designed the .416 Rigby to be overly huge so that the temperature variant wouldn’t give any trouble while extracting a cartridge. Having a cartridge stuck in the chamber while facing a charging elephant or buffalo is a great way to destroy a company’s reputation! The designers at Rigby solved the high pressure problem by using an oversized case; and to this day the Rigby case operates at a much lower pressure then the Remington case does. But, that lower pressure comes at a cost. With today’s powders, when you have to fill a case as large as the Rigby to get the necessary velocity, the felt recoil ramps up accordingly. Because the Remington case uses roughly 80% of the powder that the Rigby does, the felt recoil drops off significantly.
In order to get the same velocity out of 80% of the powder, the Remington case must run at a higher pressure. That pressure was the initial criticism of Remington’s .416, but in my humble opinion the blame should have been laid at the feet of the first rifles chambered in .416 Remington – being push-feed in design - instead of the design of the cartridge.

But, the .416 Remington continued to defeat the odds by performing perfectly in rifles equipped with a controlled round feed setup, like the classic Mauser design or the Winchester 70 and Dakota Model 76. In these rifles, pressure isn’t a problem and extraction happens flawlessly every time.
To be honest, I feel that any rifle that is headed for use in dangerous game country should have the strongest extractor possible. I know, the fans of Weatherby and Browning rifles are making little bald voodoo dolls of me, and I understand the point that they very seldom fail. I also understand that problems can arise in controlled round feed rifles. But, I sleep better knowing I’m headed afield with the strongest gear available, to hedge my bets against failure or a tragedy. My personal favorite rifle for dangerous game situations is the aforementioned Winchester Model 70 .416 Remington in the Safari Express configuration, which I’ve nicknamed ‘Cocoa’ due to the dark-stained stock, and it is equipped with the controlled round feed “pre-‘64” claw action. I have left ammunition in 95-degree Fahrenheit heat all afternoon, and never ever had a problem with a stuck cartridge. My handloads operate at the same velocity as the factory stuff (400-grain bullets at a measured 2,400 fps), and I’ve yet to have an issue with them either.

So, where exactly does the .416 Remington fit? Is it a flexible rifle like the flat shooting, easy recoiling .375 H&H, but beefed up? Or is it on the bottom end of the stopping rifles? The answer, in my opinion, is yes to both questions. Or, perhaps better put, it is a wonderful compromise between the two.

What we have here in the .416 Remington is a relatively flat shooting cartridge, fully capable of making a distant shot on a kudu or gemsbok, yet perfectly able to confidently drop a buffalo or elephant when things get up close and personal. Norma’s African PH line of ammunition not only includes the fantastic 400-grain solids, but the dynamic duo of Woodleigh softpoints and full patch bullets in 450 grains, which are driven to a velocity of 2,150 fps, for some serious stopping power. Should you choose to handload your own ammunition, the wonderful Norma cases are available in .416 Remington as the basis for your creation.

The .416 Remington Magnum has cemented its place in the shooting world. While I am completely respectful of the nostalgic position that the .416 Rigby holds, I think that much like the .30-’06 v. .308 debate, there is plenty of room for both of them. Spend some time with your .416 Remington, and you’ll find you have a friend for life!

Norma-USA - Norma has your back with your complete line up of precision ammunition
Website www.norma-ammunition.com
T

Funny thing in my neck of the woods, the 416 Rigby is more a easily obtained than the Rem. The rifles are generally more expensive and the ammo is crazy expensive, but that is what is on the shelves. Romance factor I guess.
You must log in or register to reply here.