In the span of five years, the 4 Stable Stick shooting sticks have conquered the hearts of stalkers all over the world. It was time to take things further, with a shooting academy to up one’s comfortable shooting range to 300 meters.

At Domaine de Boismorand, a 650 hectare large enclosed private property situated in the north of Bordeaux, we met up for an uncommon shooting experience. After practicing on targets we would have the possibility to put our practice to the test… but outside of the enclosed plot of land!

After being welcomed by Lilian Camalet, the representative of the 4 Stable Stick company, we were quickly handed off into the expert hands of Michel and Pierre, the two shooting instructors who guided us with their professional military experience. There was a very heterogeneous audience present, comprising of hunting guides, your average everyday hunters, and even one young German huntress. Our instructors were not messing about: “Today there is one word that counts, safety!” To be more precise (no pun intended), we chanted the word safety four times, and were immediately reminded of the commandments of the hunting license.

Once the scene was set, teams of two students were invited to shoot three shots at a target 25 meters away. Yes, 25 meters, since it was all about seeing whether the marksman was capable of grouping their bullets. After each sequence of three shots where the teams of two watched each other mutually, we entered into the analysis phase of each person’s shots and finally the first recommendations were made, using didactic documents to back up the science behind it. Here we learnt for example, that in terms of keeping track, the hunter often ignores where his bullet ends up. On flat land, a bullet shot at a stag by a 1,6 meters tall, upright hunter, will burry itself in the ground 78 meters behind the animal. Next, we inspected the foundations of shooting, more precisely what the instructors call the shooting sequence. 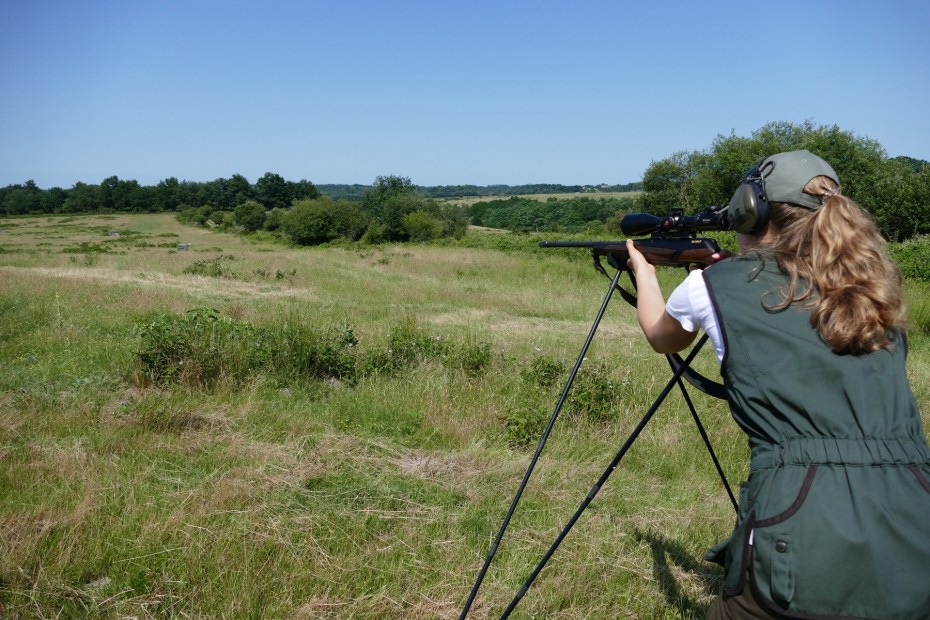 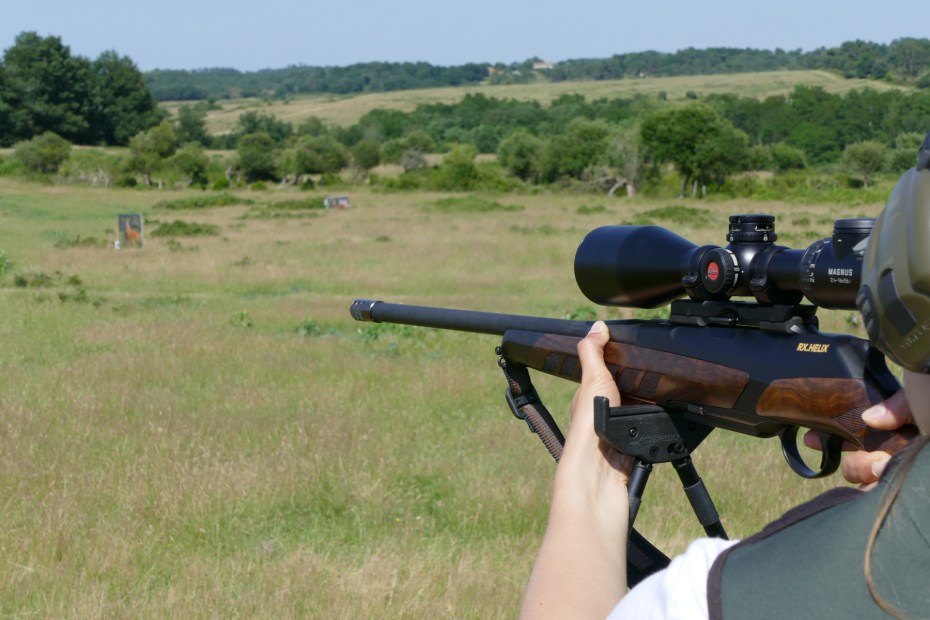 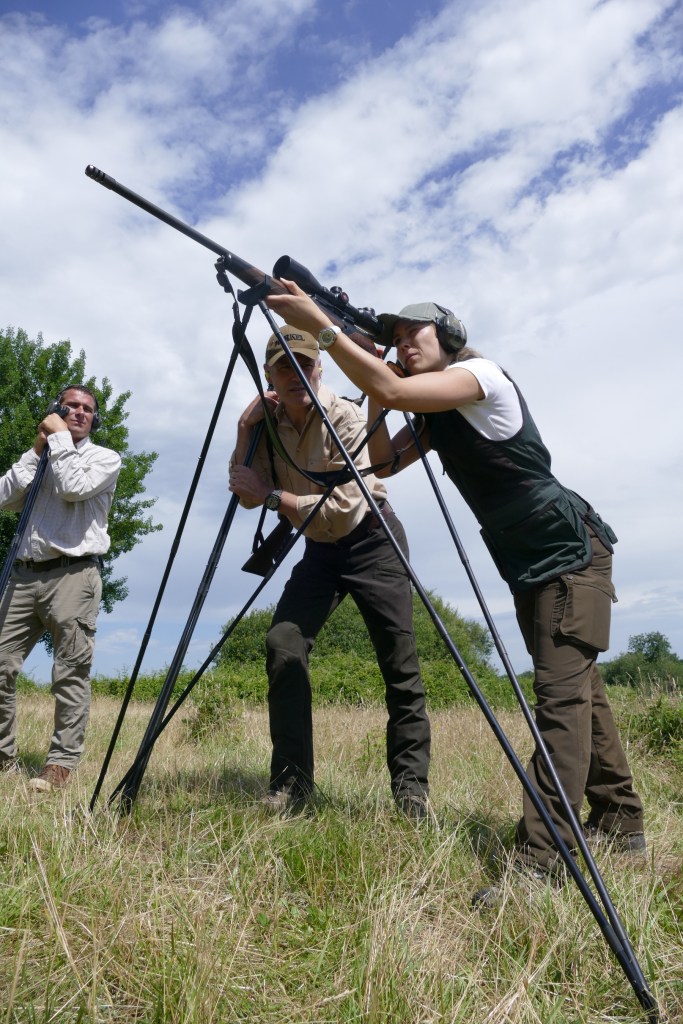 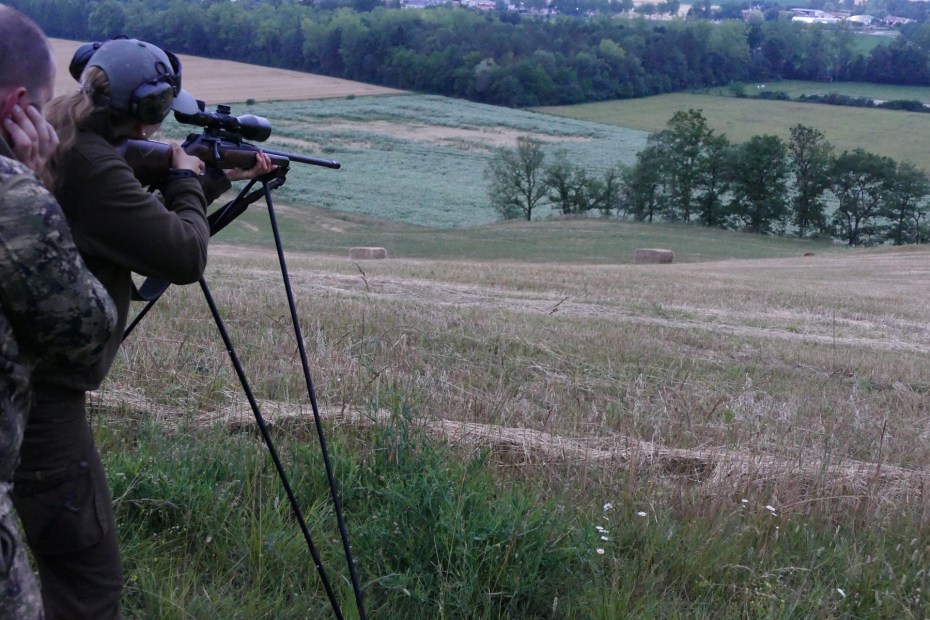 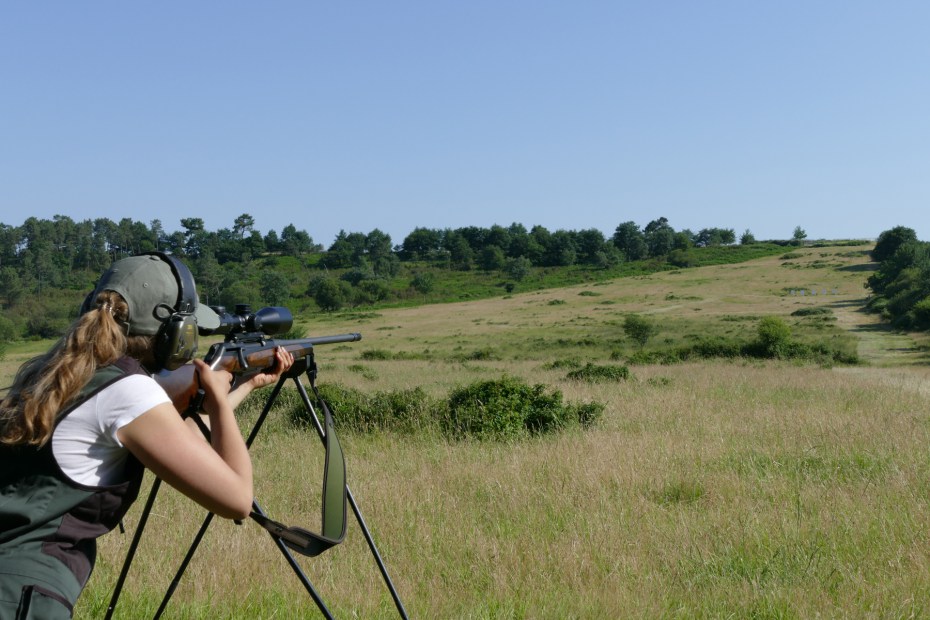 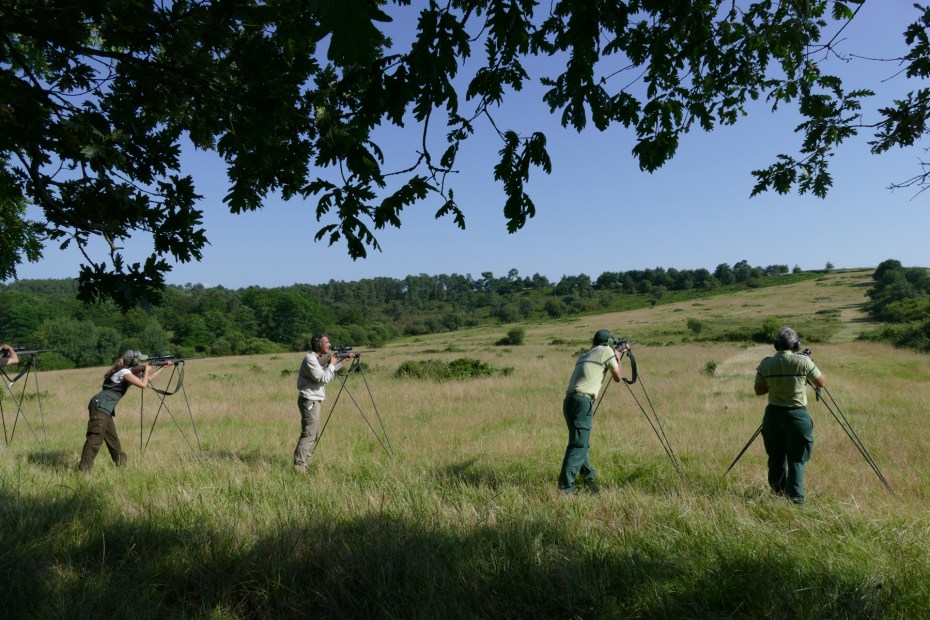 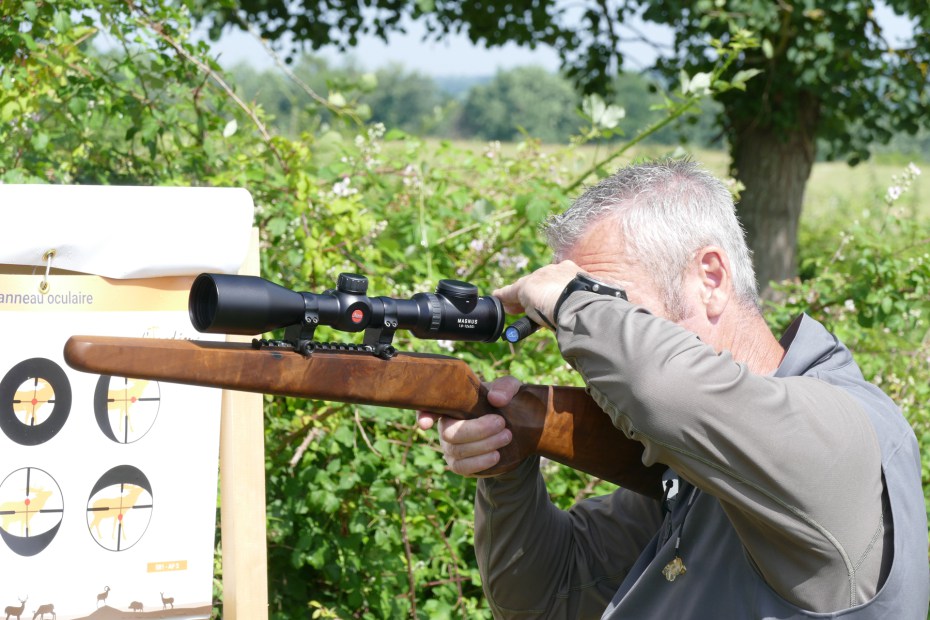 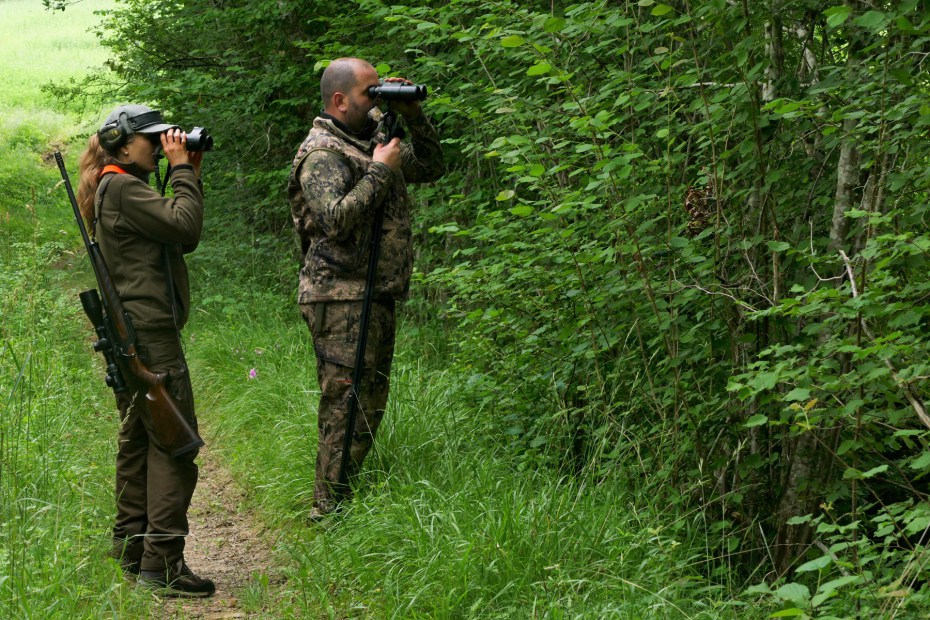 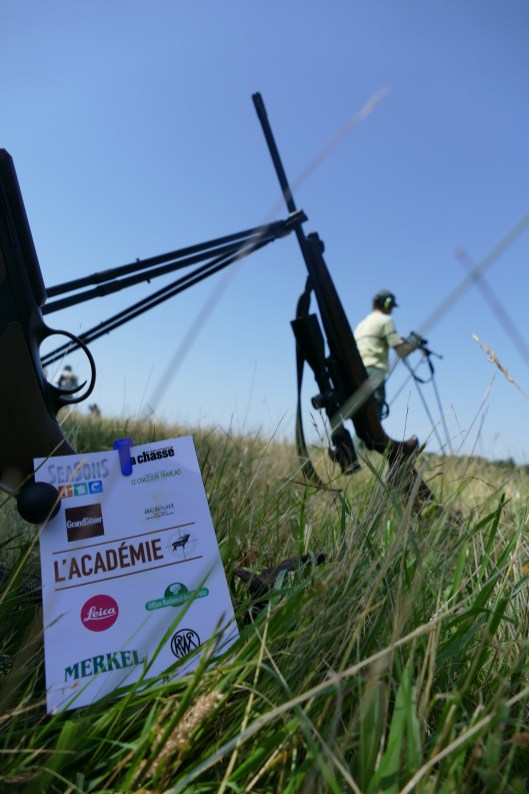 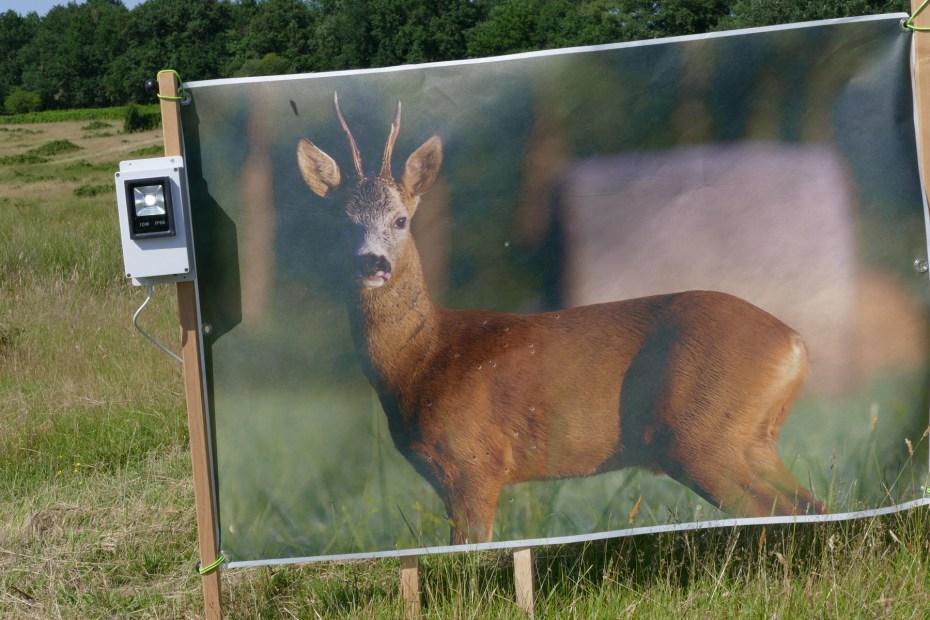 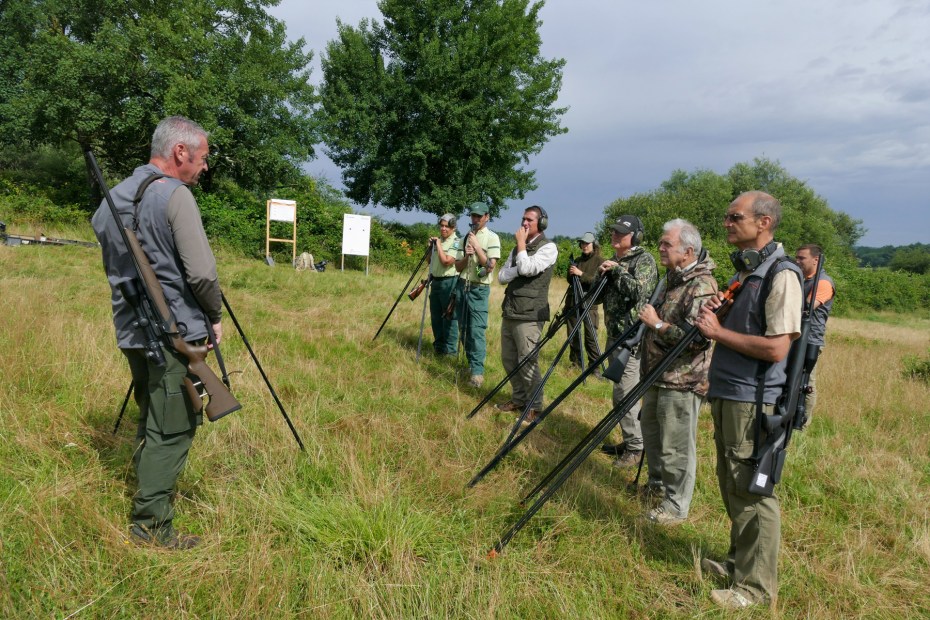 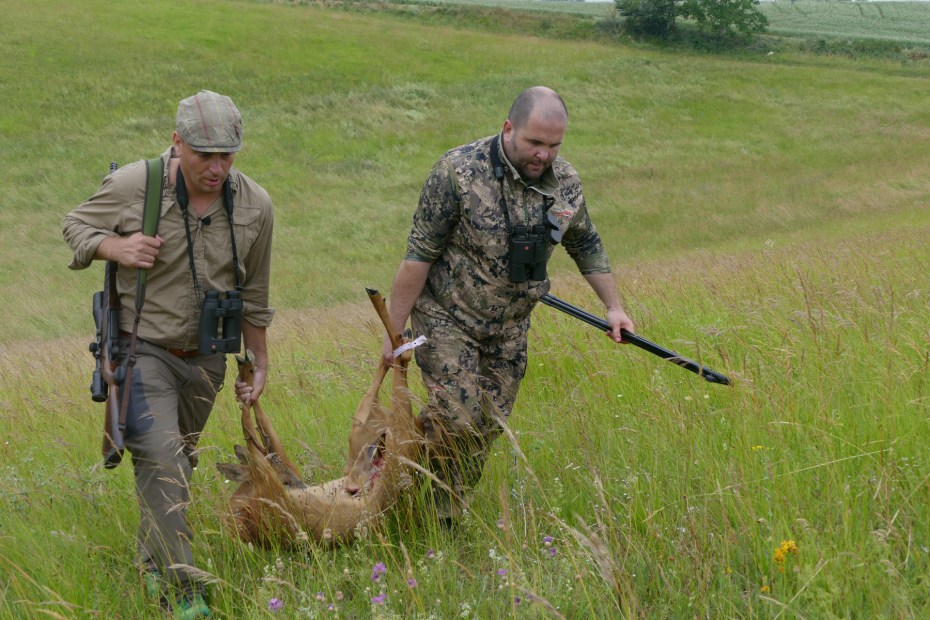 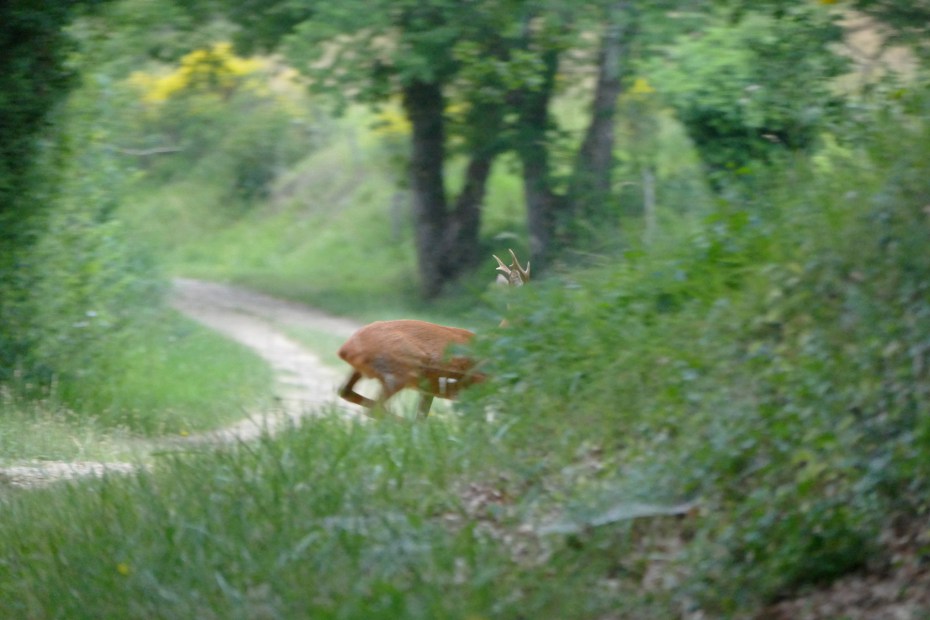 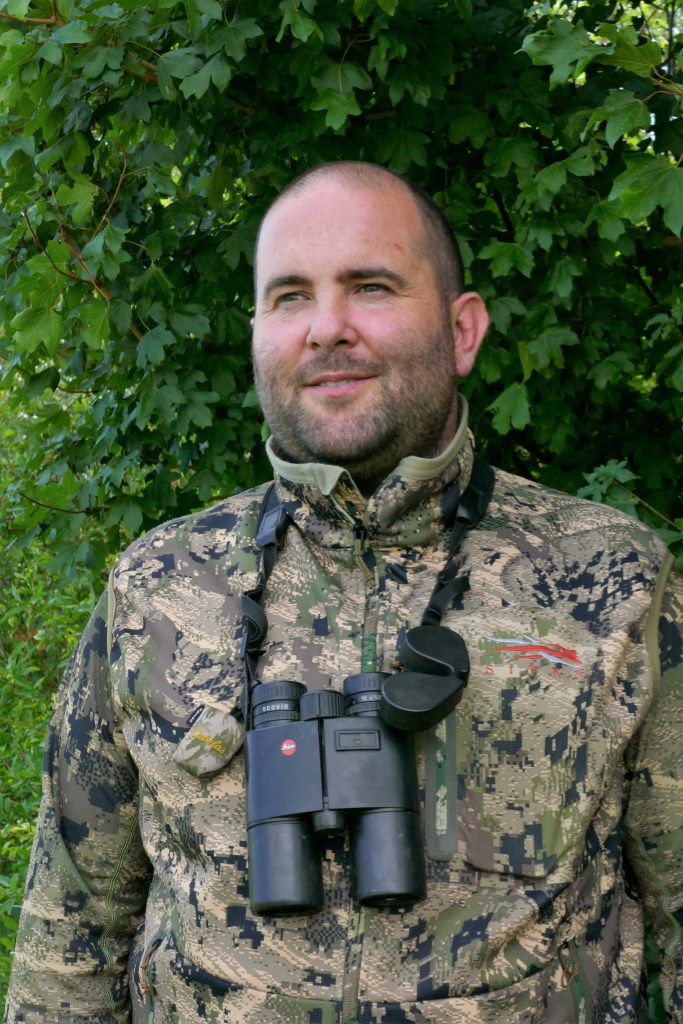 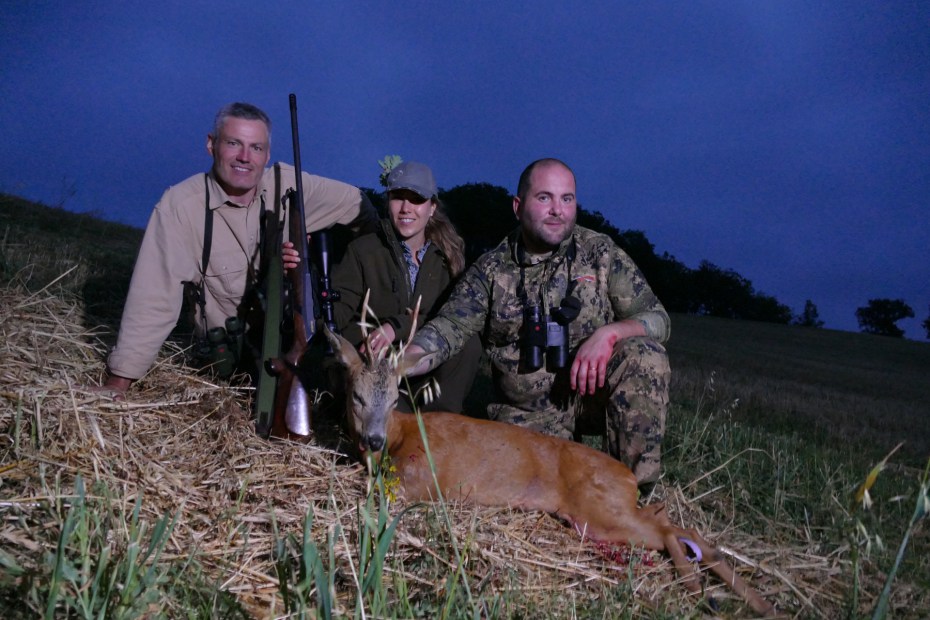 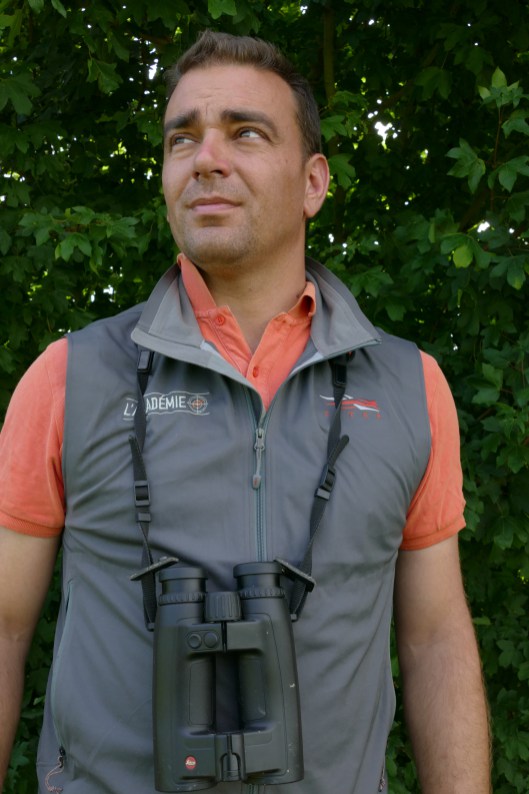 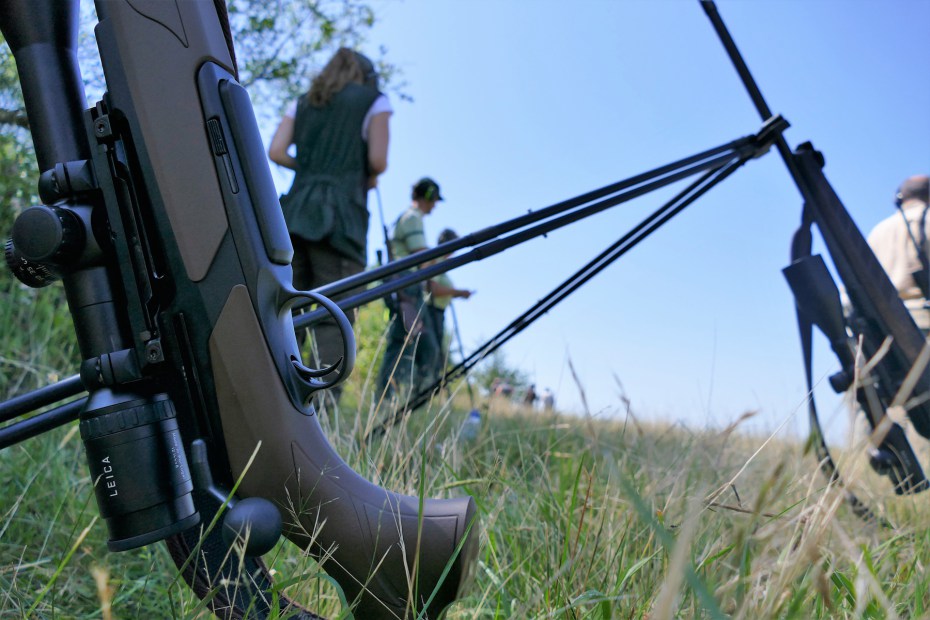 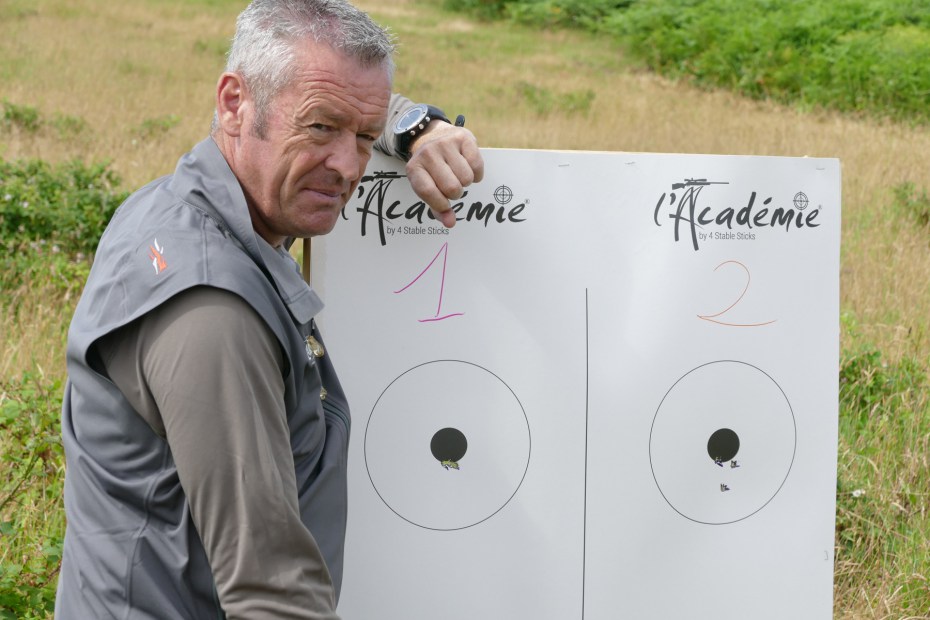 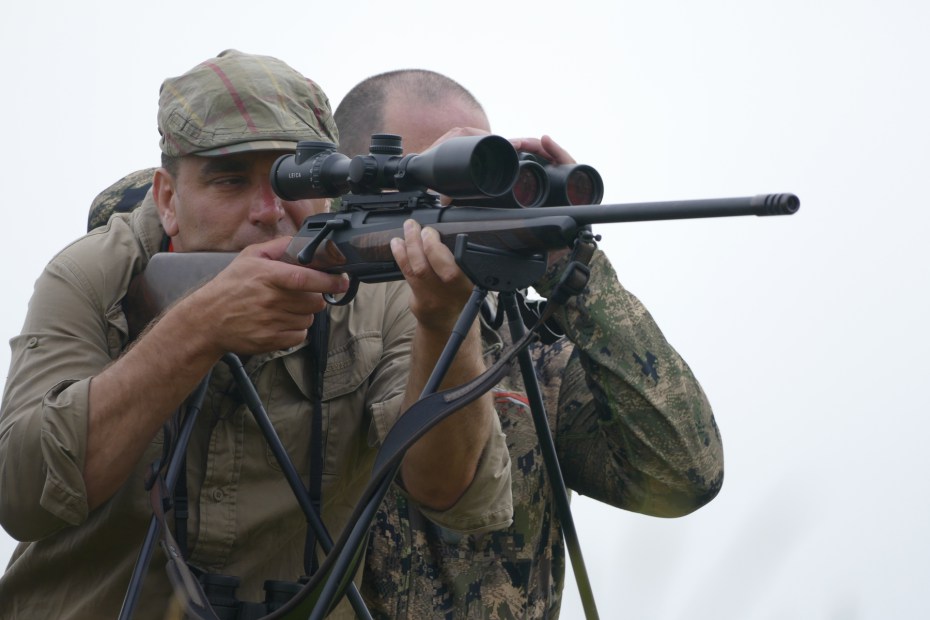 The shooter’s position, taking up the firearm, breathing techniques and looking through the scope. After a few dry runs, we took up a series of three shots from the 4 Stable Stick, but this time at 50, 100 and 200 meters. Between each series, the marksmen inspected monitors pointed at the targets and the analysis allowed each of them to correct their mistakes. It also allowed our bodies to relax while our heads mulled over the concepts of optics, the internal, transitional, external and terminal ballistics, lethal placement on the game, looking through the scope, in short: everything that makes the difference between an uncertain and a lethal shot. Sure, addressing this subject was serious, but the session rolled with an absolutely pleasant ambiance. Everyone progressed at their own pace, under the watchful and empathetic eyes of the always present instructors, there to correct the position of a finger on the trigger, a jerky breath, etc.

After lunch came the moment of truth, with a “shooting trail” on life-size electronic targets, at random distances. This hour allowed one to gain confidence before jumping off the deep end with the session at 300 meters.

6 hours previously, only one hunter of the group had shot up to 300 meters, and at the end of the afternoon, all the participants had succeeded in shooting a lethal group at 300 meters. That had been the goal, being capable of definitely killing an animal at this distance, not just placing three bullets in a pot of yoghurt at 300 meters. Therein lives the interest in creating this event, 100% hunting orientated, not just sport shooting.

Next day, we were all in the Gers region, in company of the guides of Actéon South France for a roebuck stalk to put all our skills learnt the previous day into practice. We accompanied Kerstin, the young German huntress, who would discover shooting off the sticks, stalking, and the region. After a fruitless morning outing, the evening was crowned with success, and what success it was! In last light, a nice six point appeared several hundred meters away. After one of the most thrilling stalks, he fell from a perfectly placed bullet on the shoulder, delivered with the calmness of an experienced hunter. The other hunters performed equally well, with 100% success and a ratio of 1 bullet: 1 animal.

The 4 Stable Stick Academy had made its mark: an acquired shooting sequence results in an acquired trophy… in accordance with standard practice!

A meeting with Lilian Camalet (4 Stable Stick) and Julien Blanc (Actéon South France), the opportunity to discuss a unique project in Europe.

Lilian Camalet
Leica SO: After having launched the “4 Stable Stick Academy” in 2016, you have already engaged in the next step. What’s your motivation?
LC: The objective of the Academy is that which 4 Stable Sticks has defended since its creation: to easily ameliorate one’s shooting performance for hunting purposes. Sure, the shooting sticks provide the best stability for the firearm, but the other factors are also important for the success of the shot. The encounter with shooting professionals originating from a military environment, was the trigger of this project and our slogan: succeeding in a shot is not a goal but a consequence!

Very quickly we expanded our motto by addressing the fundamental system of shooting that is required knowledge: how our equipment works (rifle, optics, ammunition) and most importantly how to handle this equipment in a safe way for ourselves and our environment.

The invention has been our driving force for five years now. The launch of the Academy in 2016 was the next step and a major innovation in the hunting world. The first year was marked by the success of the method, and the collaboration with Actéon followed naturally. The association between the Academy and the hunt allows us to offer an opportunity to put practice into action, that’s to say validate the acquired skills on real terrain.

Leica SO: Combining a shooting and hunting course – is that a first for Europe?
LC: A few hunting guides require a mandatory visit at the shooting range from their clients, to verify the materials and aptitudes of the hunter. In Germany, hunting in state owned forests requires an obligatory previous visit to the shooting range. But essentially, to our knowledge, an equivalent course does not exist in Europe. In the first groups of hunters, the ratio of numbers of shots to animals killed was altered in a significant way. We are approaching a 1:1 ratio.

Leica SO: When will there be a course on driven hunting?
LC: The driven hunt is the most practiced method of hunting in France. The basics of the first module are common to shooting while stalking or on a driven hunt. This will allow you to begin ameliorating your shooting on driven hunts, but we’re already thinking of offering specific modules in the future.

Julien Blanc
Leica SO: After strictly providing hunting tourism, Actéon has expanded into a collaboration with this course. Why?
JB: First and foremost, I think that it’s a story of people, of meetings, that allowed the improvement of a structure that had already been in place for a year. I hope that this will bring that little bit extra, that will motivate the hunters. I will always approve of a course like this, since it forces one to not settle on past glories and helps improve ones competences, which is especially important when it comes to shooting.

Leica SO: Have you noticed a higher need in terms of your stalking hunting clients?
JB: Nowadays stalkers have the possibility to overequip themselves and don’t always correctly practice using their equipment. Whose fault is it? I don’t want to appear judgmental, but yes I’ve noticed a growing need of this course in our hunting clients. They can look to increase their knowledge of their gear in order to put it to use correctly. We can only congratulate those who do!

Leica SO: Can we foresee an enforcement of mandatory training before all hunting trips?
JB: I think that we are not in the position to be able to ask for a mandatory shooting course before each trip, but we are thinking more and more of creating a shooting range in close proximity to our hunting areas, in order to check the sighting in of the rifles, which is unfortunately often unpredictable. It’s the minimum that we can offer from an ethical standpoint, but also essentially that the guide and client are perfectly confident.

The shooting academy consists of a common platform, but the clients have the choice between four unique options for the hunt. The proposed prices are “all inclusive,” from beginning to end. It includes 3 days and 3 nights, full pension, including shooting taxes. For the mouflon and izard hunts, the price includes 4 days and 4 nights. In any case, a visit to the Armagnac cave or to a producer of foie gras is included.

wonder how the sticks would work with handguns?
You must log in or register to reply here.

Meeting On The Summit

Reinhard Rüger: How The Leica Geovid Keeps Him On Track