Roy Weatherby thought he could improve Holland’s Super .30. He did. No one has trumped his!

The Great Depression had left long scars. The Dust Bowl’s spawn, hollow-eyed, joined caravans of the destitute from the industrial East, nursing overloaded, underpowered automobiles along Route 66. Roy Weatherby and his new wife Camille chose that time to leave their native Kansas, where Roy had put his considerable energy into studies at the University of Wichita, while working for Southwestern Bell. In California, he’d start his own business.

He did, establishing a successful insurance agency. But in off-hours he built rifles in a basement shop equipped with a Sears lathe and drill press. He also designed cartridges, “blowing out” the shoulders to reduce body taper and boost case capacity. His first effort, the .220 Rocket, was an improved Swift. By most accounts, the .270 and 7mm Weatherby Magnums came next, on the .300 H&H hull trimmed to the length of the popular .270 Winchester.

The .300 Weatherby Magnum came along in 1944, on the full-length (2.85-inch) Holland hull. Its popularity soon surpassed that of its siblings. With a 180-grain bullet at 3,250 fps, it shot flatter than the Super .30 (.300 H&H), carried more energy and battled wind more effectively. Commercial ammunition became available in 1948 – all handloaded by Roy in his shop! He was soon scouring the globe for ammo firms that might load on contract to his specifications. In 1952 Fabrique Nationale (FN) quoted 15 cents per finished round. Roy had been paying almost 18 cents for Winchester .300 H&H brass! But there was a hitch: FN wanted a minimum order of a million rounds, with a $50,000 deposit! When the Belgian giant changed the requirement to at least 500,000 of eachcartridge, Roy went to Norma of Sweden, which has since manufactured Weatherby ammunition for the Weatherby brand. Now Federal, Hornady, Nosler and Remington load a selected few of these proprietary cartridges under their own labels. But all Weatherby Magnum boxes hold Norma ammunition, and Norma is the only manufacturer to load the complete line.

The first .300 Weatherby Magnum rifles were rebored and rebarreled infantry arms. During the 1950s, surplus 1917 Enfields cost little more than bus fare. Magnum Mausers were pricey. Many a Model 70 Winchester in .300 H&H (introduced in 1937 in that rifles charter list of chamberings) was bored out too. Shortening feed ramps on 1898 Mausers gave riflemen the .300 Weatherby option – and a reduced buttress for the lower locking lug. In 1957 the new Weatherby Mark V provided an ideal home for Roy’s super-charged .30. Since then several other commercial makers have added this chambering in their long-action rifles. Custom shops routinely chamber for it. A David Miller rifle in .300 Weatherby drilled a one-inch group for me at400 yards. D’Arcy Echols designed his superb Legend rifle for the cartridge and gets half-minute groups.

Until John Lazzeroni announced his 7.82 Warbird in 1995, and the .30-378 Weatherby appeared in 1997, the .300 Weatherby was the most powerful factory-loaded .30. It is still all the rifle you need for any game in North America. On a hunt in British Columbia, I met a hunter coming off a mountain with a fine bighorn ram. The animal had thwarted him for three days. At last he and his guide had climbed sheer cliffs to get within 400 yards. Mountain-top winds whipped the rifle barrel, then tugged the bullet clear of the vitals. But they couldn’t keep it out of the ribs. The .300’s tremendous energy caused lethal damage, and the ram fell. Next day, weather closed in on the peaks. This .30 “may not be a classic bighorn round,” the fellow admitted. “But with a lesser cartridge I may well not have killed or even hit that ram.”

The .300 Weatherby is frisky in recoil, as you’d expect. But the Mark V stock distributes it well, and the standard 26-inch barrel keeps blast at bay – while giving you the eye-popping bullet velocities Roy Weatherby had in mind back in 1945.


Ballistics:
Factory loaded with bullets of 150 to 220 grains, the .300 Weatherby is arguably at its best with bullets of 165 to 200 grains. They give you starting velocities of 3,060 to 3,410 fps, impact energies that exceed a ton at 500 yards. Norma also loads the .300 Weatherby with tough, bonded Oryx bullets. This “American PH” ammunition, in Norma boxes, delivers top-end velocities. The 165-grain Oryx exits at 3,410 fps, the 180-grain at 3,250. You won’t get more horsepower from any .30-bore magnum, short of Weatherby’s hard-kicking .30-378. With a flat arc and terrific downrange punch, the .300 Weatherby is still manageable without a brake. It’s a top pick where game is burly and tenacious, and your only shot may come at great distance. 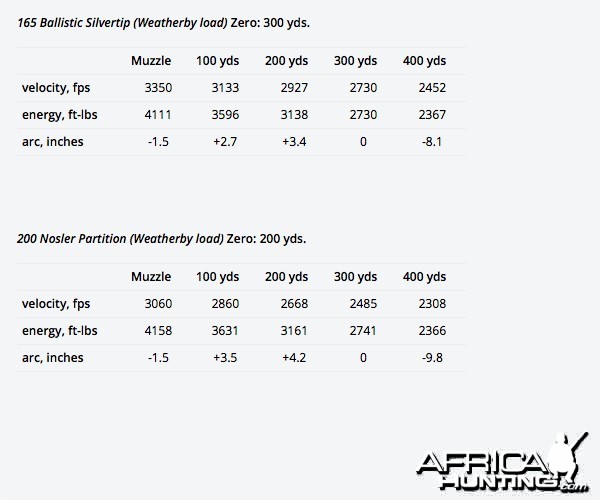