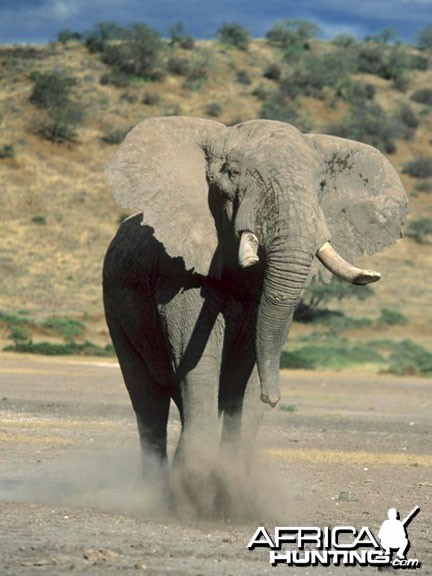 The Tepi hunting area had already been unkind to me the previous year, but little did I know what lay in store for me there a year later…

By spring 1988 I’d been working with PH Nassos Roussos, representing his safaris, for three years. Part of the job was to spend time every year in Ethiopia, familiarizing myself with the operation and new areas. This time Nassos invited my wife, Candi, and me to spend a couple of months there, the first hunting elephant out of our Tepi area, where a Swiss/Italian client, Roberto de Cesare, had taken the extraordinary 146-pounder (each side) in March 1986, which increased interest (to put it mildly) in elephant hunting in south-west Ethiopia. Subsequently, several more '100 pounders’ were taken. The hunting area was named after the town and the Tepi coffee plantation.

It was a two-day drive from the capital, Addis Ababa, and our camp was about 200 yards from the main road. Most of the hunting consisted of walking out of camp at daybreak, maybe to return that night, but often staying on a promising track until nightfall and sleeping in a village or one of several shelters constructed at the far reaches of the hunting area.

It was my second trip to Tepi. The first had ended badly with a poison palm spine embedded in my elbow - I’d spent eight days on my back, with an IV full of antibiotic, until well enough to travel back to the States. I’d hunted with PH Franco Morreschalchi the first two weeks in Tepi that year, and was to be with him again this time. While his English sounded like an actor playing an Indian in an old Western, he always managed to get his point across. He spoke Italian, Amharic, and French fluently. Of course, I didn’t. Franco was a very knowledgeable hunter and a good PH. Since we were now ranging farther and farther to find a good elephant, I decided to rent some mules and go into the mountains that surrounded our area by way of the town of Sheko. We took the old mule trails up into the mountains into villages where inhabitants were quite startled to see a 'farengi' (foreigner) come riding in on a mule accompanied by five Ethiopians.

The villagers were a good source of info on elephant movement. Elephants were getting hard to find…especially elephants with over 50 pounds of ivory on each side. After a week of exploring the area, spending nights in villages or on the trail and covering a lot of territory, we elected to return to the main camp. After a brief reunion, I was ready to again look for elephant tracks. So we headed back up the road north of Tepi for Sheko. 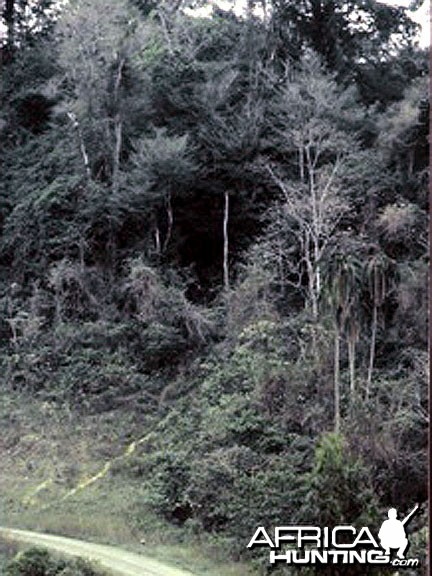 This was Elliott's second trip into the Tepi area where hunting for elephant usually meant following game trails through the forest from dawn to dusk, often sleeping in small villages in order to stay on a promising track.

We stopped at a small village that was just off the road and inquired if there had been any sign of elephant. With great expostulating and excitement, one of the natives led us behind the village to two sets of good-sized footprints made by elephants two nights previously.

I asked Franco if he really thought we could catch up to a pair of elephants on tracks that were now over 36 hours old. He said, “We try,” so off we went. For the next seven hours we found everywhere that the elephants had been. We saw where they spent the night and where they tore down a hut in an old deserted village. We saw where they had enjoyed a mud wallow. The depth of one to the tusk holes was very encouraging.

It was March and quite a dry period, so it was impossible to follow quietly. We knew when the elephants had heard us as we could hear them go crashing off. I was sceptical about the likelihood of catching up to them, but Franco wanted to pursue them. “Come,” he said. The terrain was hilly in the dense, almost impenetrable, rain forest, except where the two elephants tore a pretty good hole through that foliage. It was hot, wet and sticky. The flies and biting ants never let up, and we were wet from soles to head for the duration of the hunt. We were fatigued and our spirits were at low ebb, when from above and slightly to our right we heard HIM coming.

The elephant must have been 25 yards away and bearing down hard when we first heard him. It was 12 yards away when we could see well enough to shoot. As we learned later, I put a .458 calibre 500-grain Hornady solid just inside the corner of his right eye. Franco put a 300-grain solid from his .375 H&H in his chest, and our game scout, Hussein Borezo, did likewise with my .375 H&H. As far as I could tell, the elephant didn’t even flinch but came right for me.

I was younger and a bit more agile then. There was a 15-inch tree in front and a bit to the right of me. I rolled through some brush towards the base of the tree while chambering another round. The elephant tusked the tree. Hussein later told me his trunk swept around the tree and just missed my head, but I didn’t see it. He came around the side of the tree looking for me. I remember pulling my feet up under me in an almost fetal position as I saw those monstrous feet come down where my own had been an instant ago. The elephant spun around still towering over me. I threw the .458 up between his legs and fired point blank into his chest. At that instant, Franco shot from a few yards away, hitting the elephant’s right shoulder. Flinching from the impact of Franco’s bullet, the bull teetered over and crashed to the ground, his feet almost touching mine.

The bull had tusks that went right at 50 pounds per side. Most likely his buddy was a bigger, older bull who had sent this 'askari' to rid him of the pests that had been following them. Of course we’ll never know. 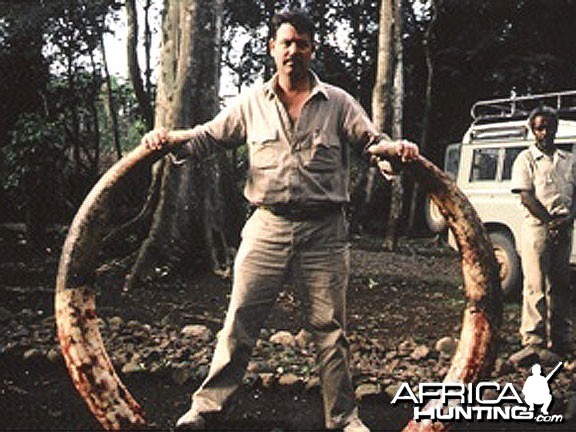 Elliott's tusks each carried 50 lbs of ivory. It was one of the last elephants to come out of the Tepi area where the record elephant, shot in 1986, carried 146-lb tusks on each side.

It took about 20 minutes before the shakes set in. I became aware of a pain in my chest and at first worried about a heart problem. Then I realized that it was the bruise from the butt of the .458 that had hammered me in the breastbone when I threw the rifle up and shot between the elephant’s legs. Would a better hit with my solid have stopped his charge? Probably, but I will say that as soon as I was back in the States I had the rifle chambered out to .458 Lott, and soon had a client bring a reamer over to do the same to the company rifles.

It turned out that this was one of the last elephant safaris in the Tepi area. Nassos soon acquired Gura Farda, an area out of Mizan Tefari just past the Bebeka Coffee Plantation where we hunted until the revolution and consequent cessation of elephant hunting in 1992. A few years ago I visited Franco at his plastics plant in Addis Ababa. I’d heard that he didn’t have a picture of himself with that elephant, so I had an 8 X 10 made for him. He showed it to his son and in English (for my benefit) said: “This is the elephant that tried to eat us.” I couldn’t have said it better in any language. 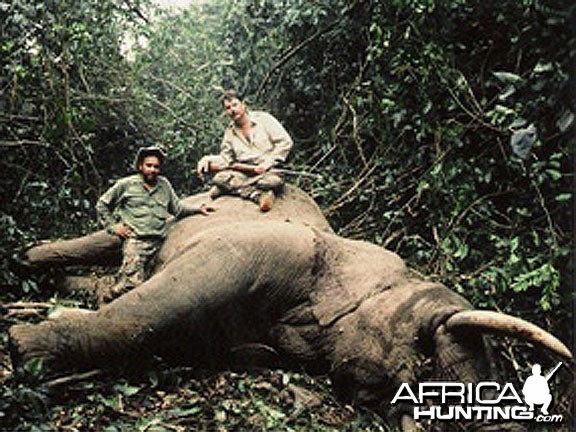 Rich Elliott and PH Franco Morreschalchi with the elephant that Elliott shot just inside the right eye at 12 yards with a .458 with a 500-grain Hornady solid. Even with back-up shots from the PH and game scout, the elephant kept coming.

Rich Elliott first travelled to Ethiopia in 1982, and joined Ethiopian Rift Valley Safaris in 1985. He lives in southern Illinois with his wife of 41 years, Candi.
Last edited by a moderator: Dec 1, 2016
African Hunting Gazette
You must log in or register to reply here.

Last of the Botswana Elephant Hunts

Six Elephants Killed In One Day By Poachers In Ethiopia

A Red Forest Buffalo in Kaffa Province of Ethiopia?