Foxi said:
Some time ago I reported on a visit to the Benedictine monastery of St. Ottilien, near Munich.
The present abbey was founded in 1898 by Cassian Spiß to missionize the - at that time non-Christian - population of Ungoni(Ruvuma Region). In 1931 Peramiho became a territorial abbey and thus the centre of the Benedictine mission in the southwest of today's Tanzania.
I asked the archivist of the monastery to pick out some hunting photos from the old days and he was kind enough to do so.
I would like to thank brother David for this (the address of a monk is brother, I did not know if this also applies to "civilians", but they did not hold it against me).
For all those interested in the history of this country, the monastery is a treasure trove of the first order.
I got the permission to take these pictures here and maybe one or the other of you will enjoy them as much as I did.

two old warriors.
Maneater (lions and leopards) were a permanent problem, once they did not eat people, they robbed the station's cattle.

The monks were generally good marksmen, almost all of them had military training.
During the war they were only used for sanitation purposes

You may not think it possible, but 100 -120 years ago, there were more nuns than monks in Tanzania.
What courage and even more trust in God these ladies had to muster.
Unspeakable diseases, hunger, riots and more than 10,000 kilometres away from home to train people in handicrafts and schools and to spread the word of God, we can no longer imagine that time.
Here a nun with a self firing device (right word ?).
Again and again lions that made trouble.

What a joy.
Young monk with a strong cape buffalo.

Easy rider
Born to be wild

View attachment 368527
Monk with an eland.
Does anyone recognise the rifle?

It was interesting to hear that the leadership of the mission took place in the monastery St.Ottilien (1 hour drive from Munich today)
But the military operations during the Kaiserreich of Wilhelm II. were not planned in Berlin (Arab riots on the coast and Sansibar,Wahehe,Maji Maji .....) but in Ingolstadt !!! (today the center of AUDI cars )
There is a military museum there, that I would like to visit.

Leopard in the trap.

View attachment 368529
a lion killed by spear in the eye.
On the back of the photo
"this is the lion that ate our carpenter Sebastian".

these could be two Wanderobos warrior,
Wanderobos were impoverished Massai.

So ,and now I let it go.
I hope you have some joy, to see some hunting pictures from really old Africa.
Foxi
Click to expand...

Fascinating! I believe the wine they made is still done today too.
Carruthers

as a young man two friends and i hunted small game with a priest in our area, he used a fine 20 ga fox double barrel shogun, he didn,t hunt large game.

Hello folks,
thank you all for your kind words for my OLD AFRICA pics.Here a few further 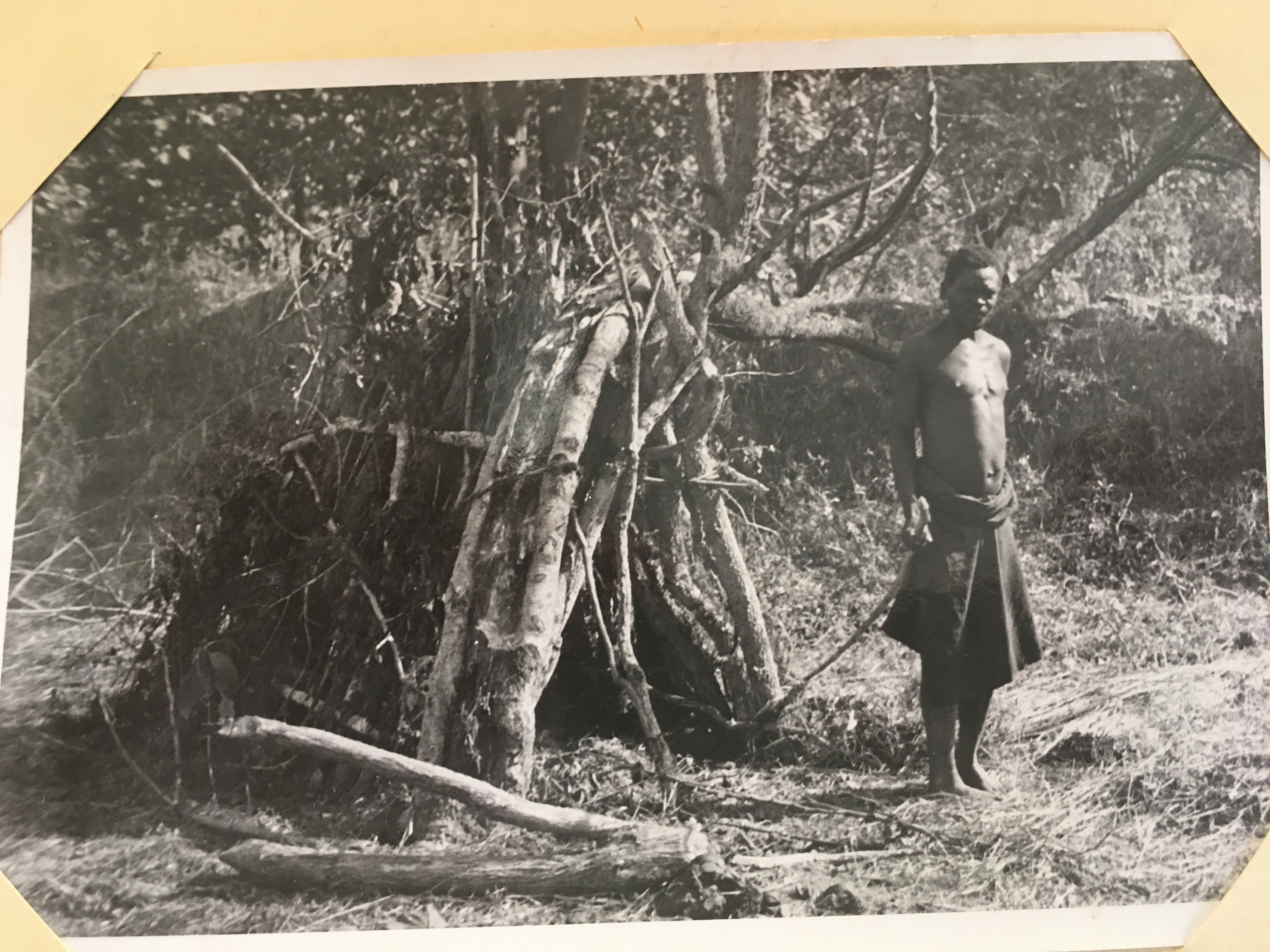 Again and again self firing traps .
Again and again threats from the big cats of prey .
One hardly believes this today, but the big excitement seems to have been the lion plague.
Several monks have also risked their lives hunting them. 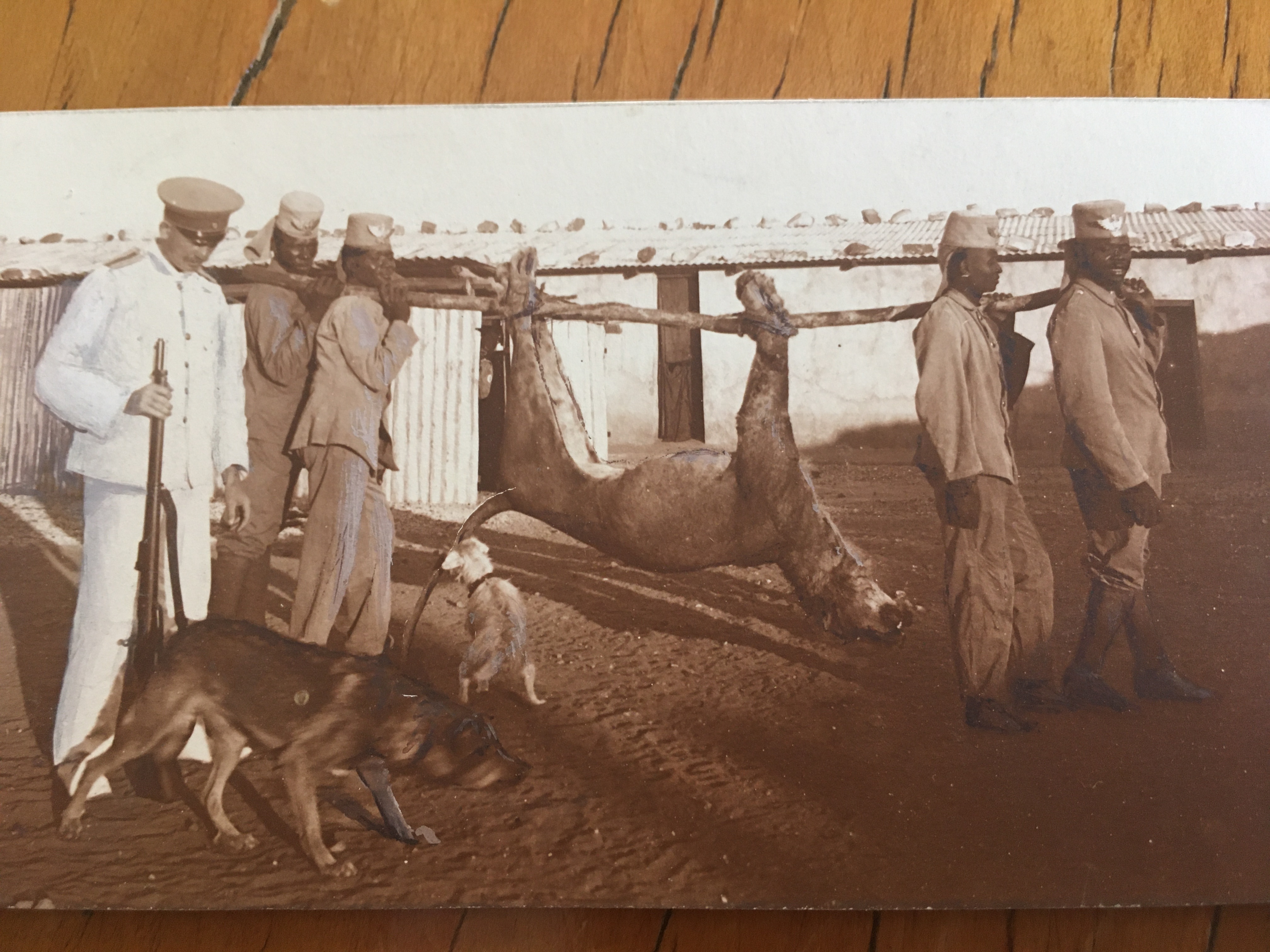 Schutztruppenoffizier of the German Empire with Sudan askaris.
A naval officer ? I am not very familiar with uniforms.
The army of the German Empire called itself "Schutztruppe" (protect troops) in the colonies.
Until the war in East Africa, it consisted exclusively of black soldiers, led by the whites and their NCOs (Effendis called).
The Sudan-Askaris from the Egyptian British Sudan had the best reputation.
Which were replaced by England for money.
An early forerunner of personnel leasing one might think.
These Sudanese were outstanding and hot-blooded because of their military skills.
England then stopped this programme because they could not and did not want to do without the Sudan (and Zulu) Askaris, because they needed them themselves and they did not want to give the German Empire such an advantage with well trained and warlike soldiers. 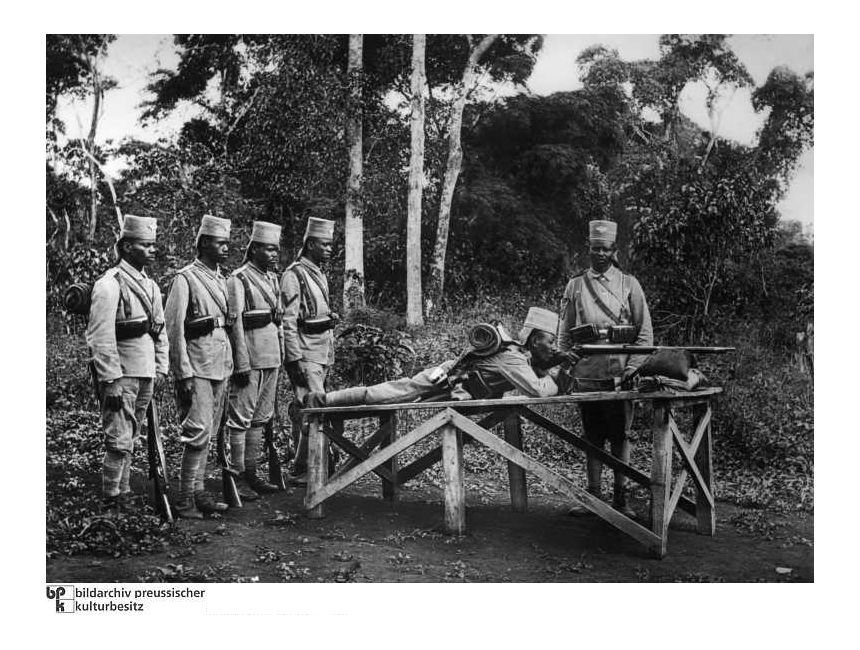 The famous Askari Order by Hermann von Wissmann, the conqueror of Tanzania (DOA in those times) under Reich Chancellor Bismarck . 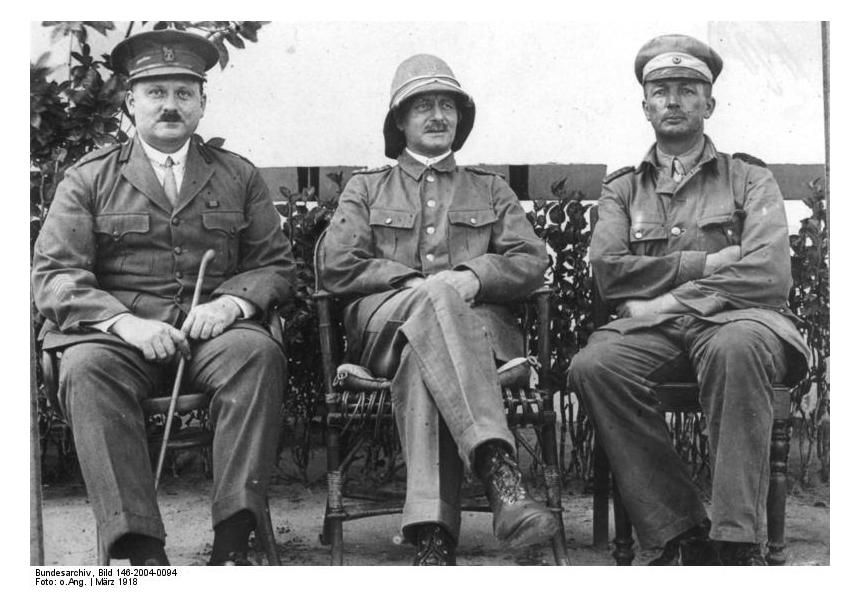 Without these guys Lettow Vorbeck (middle, general of the German troops in DOA during the 1st WW) would never have lasted so long. In 1926 Lettow-Vorbeck made sure that the Askaris received their promised pensions. During the Second World War the payments came to an end. The pensions of the Askaris were paid out again by the Federal Republic of Germany from the beginning of the 1960s until the death of the last Askaris at the end of the 1990s. 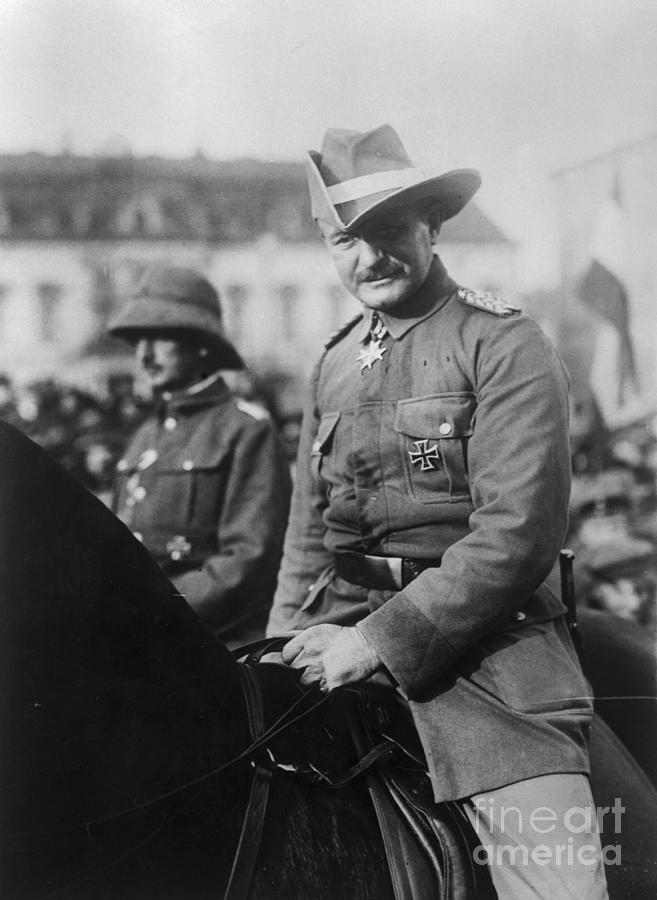 Lettow always spoke with great appreciation about the Askaris (and their support teams). This did not fit at all into the picture of the Nazis' racial mania. They would have liked to put him in front of their carts. So Goebbels and Hitler also dropped him- thank God.
(Beg your pardon for a little bit off topic) 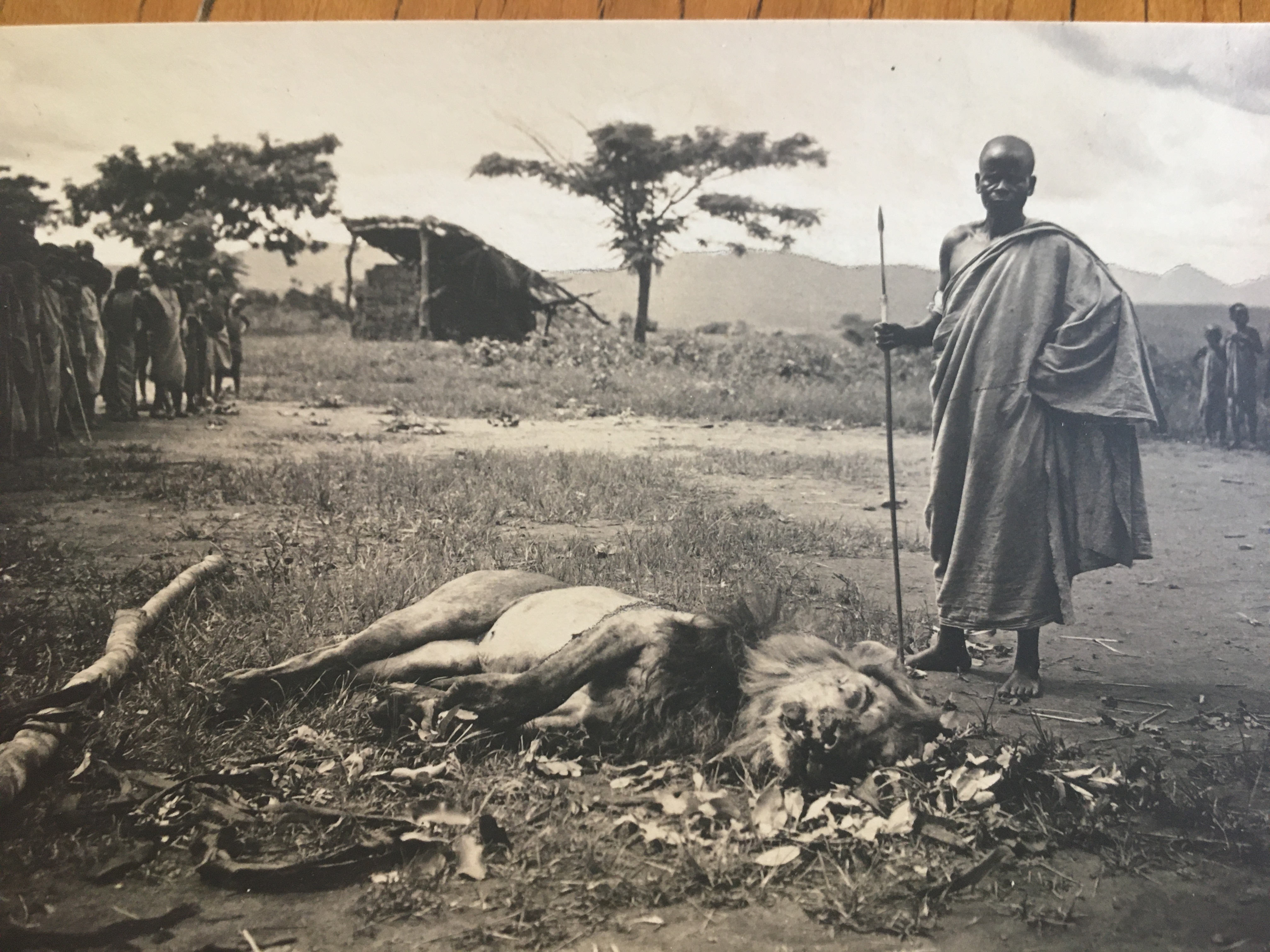 I hardly know of any other picture that depicts the myth of OLD AFRICA as this one does.
This photo tells more than 100 books.
Just let it work for you too.

Thanks for the new photos and comments!
And here I am, returning to Africa of many faces;.... the sloe-eyed temptress with flowers in her hair who stole my youth and my heart, and left me an old man with a kaleidoscope of conflicting memories of many dashed hopes and some fulfilled dreams. E. Echols

Awesome photos and story. Thanks for sharing.
B

Great story.
I had it in my arcives for decades also.

Thank you both for sharing the history. Can't get enough of that. Keep it coming please.
You must log in or register to reply here.