Some time ago I reported on a visit to the Benedictine monastery of St. Ottilien, near Munich.
The present abbey was founded in 1898 by Cassian Spiß to missionize the - at that time non-Christian - population of Ungoni(Ruvuma Region). In 1931 Peramiho became a territorial abbey and thus the centre of the Benedictine mission in the southwest of today's Tanzania.
I asked the archivist of the monastery to pick out some hunting photos from the old days and he was kind enough to do so.
I would like to thank brother David for this (the address of a monk is brother, I did not know if this also applies to "civilians", but they did not hold it against me).
For all those interested in the history of this country, the monastery is a treasure trove of the first order.
I got the permission to take these pictures here and maybe one or the other of you will enjoy them as much as I did. 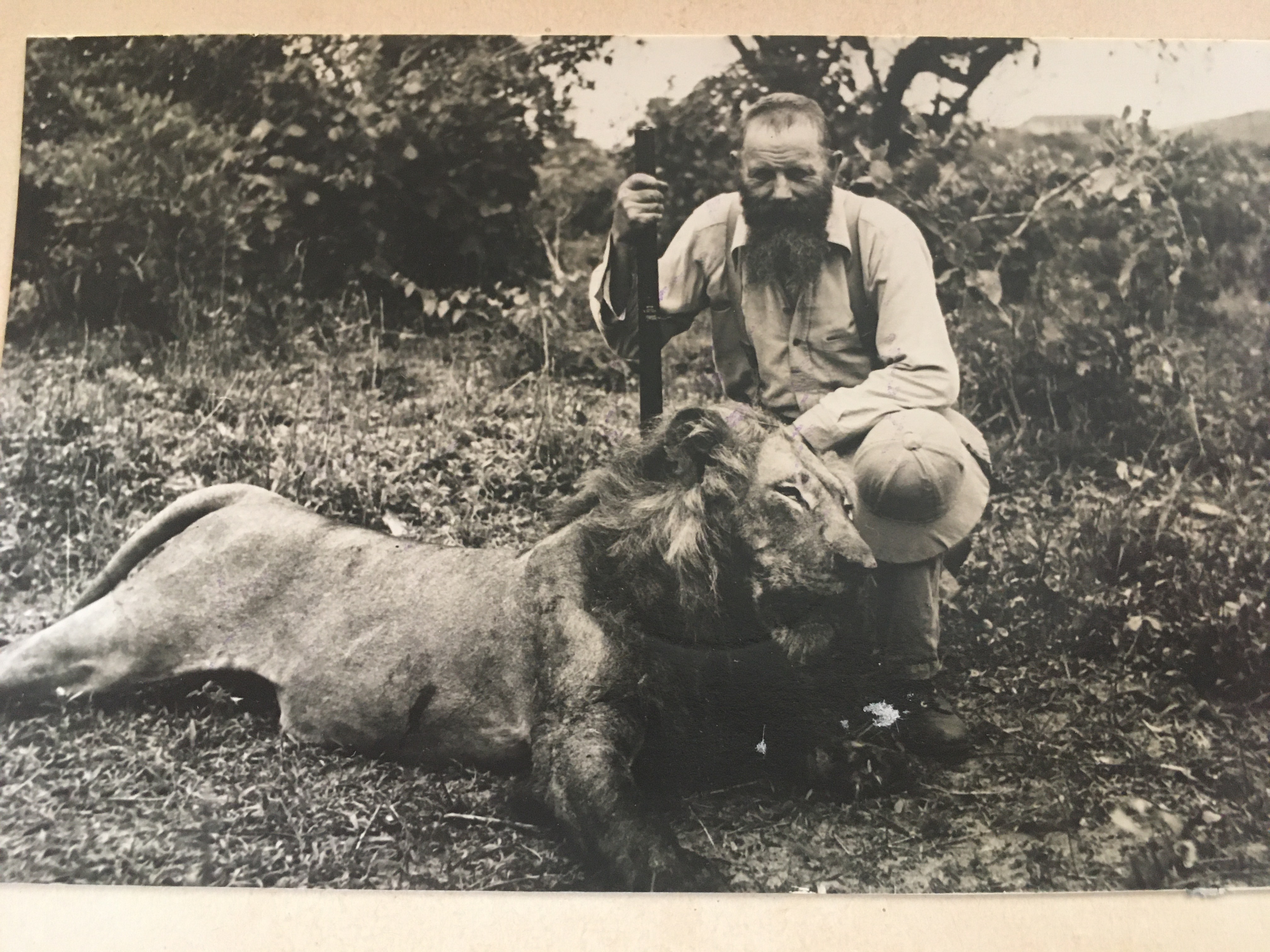 two old warriors.
Maneater (lions and leopards) were a permanent problem, once they did not eat people, they robbed the station's cattle. 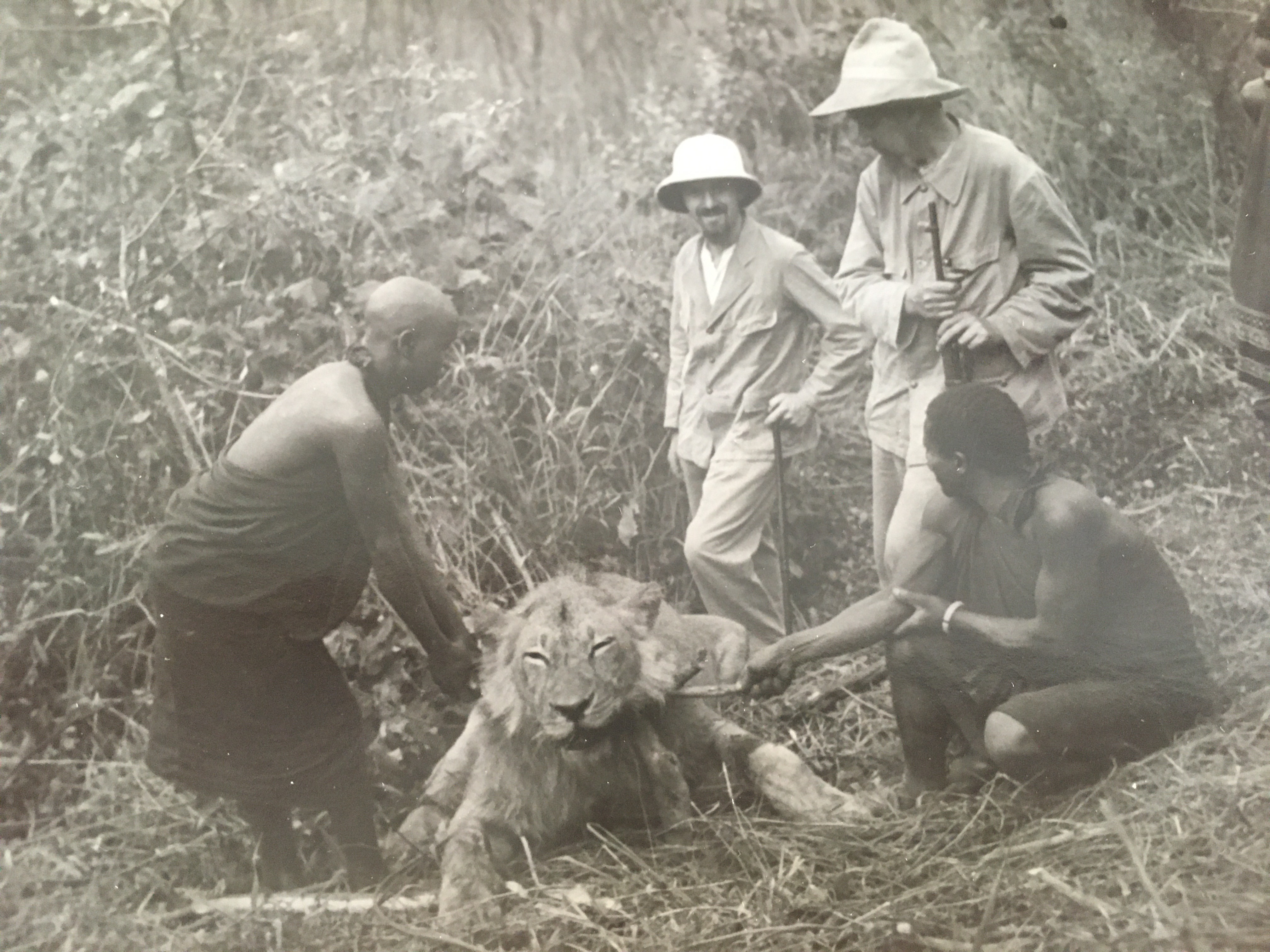 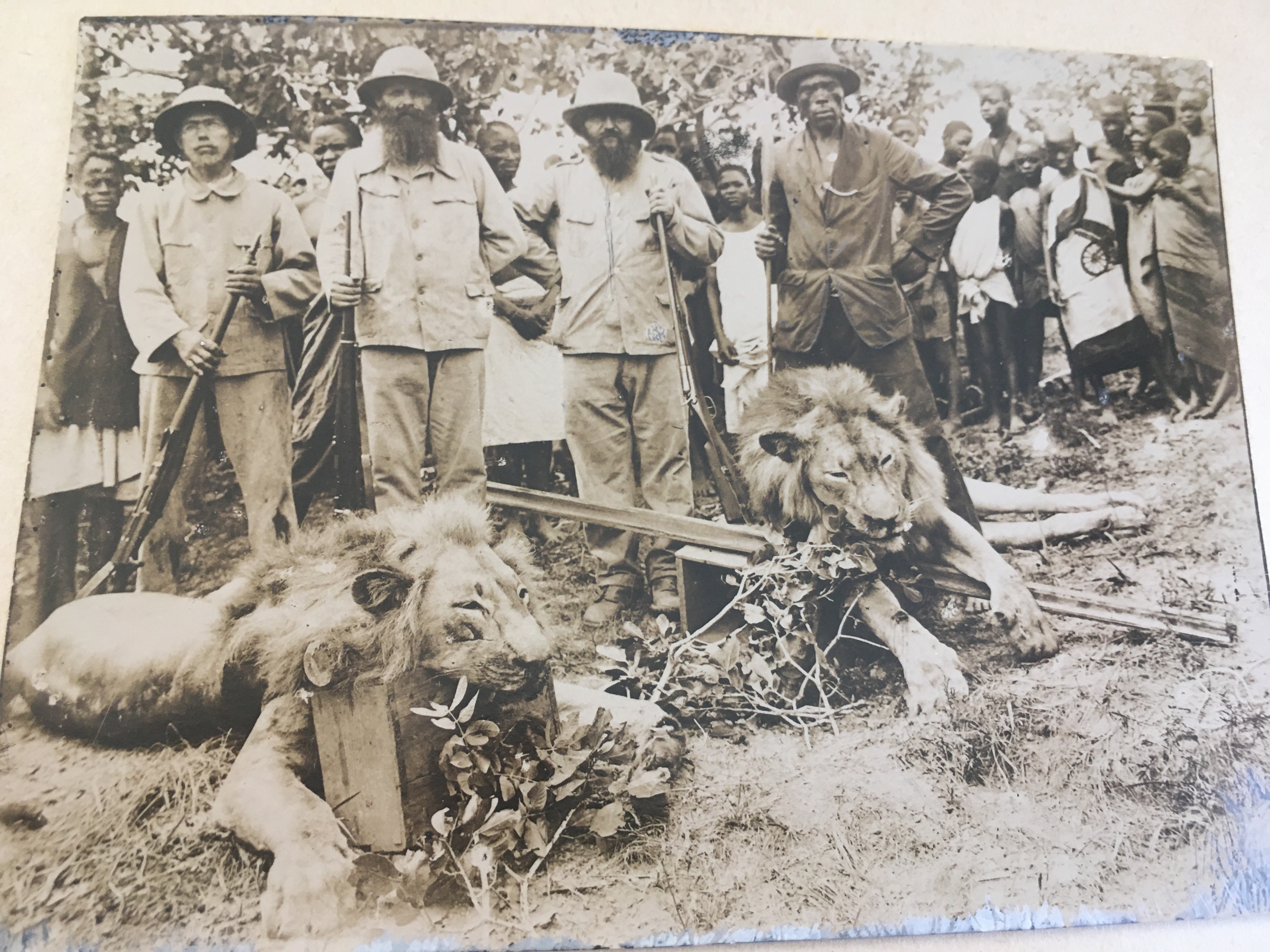 The monks were generally good marksmen, almost all of them had military training.
During the war they were only used for sanitation purposes 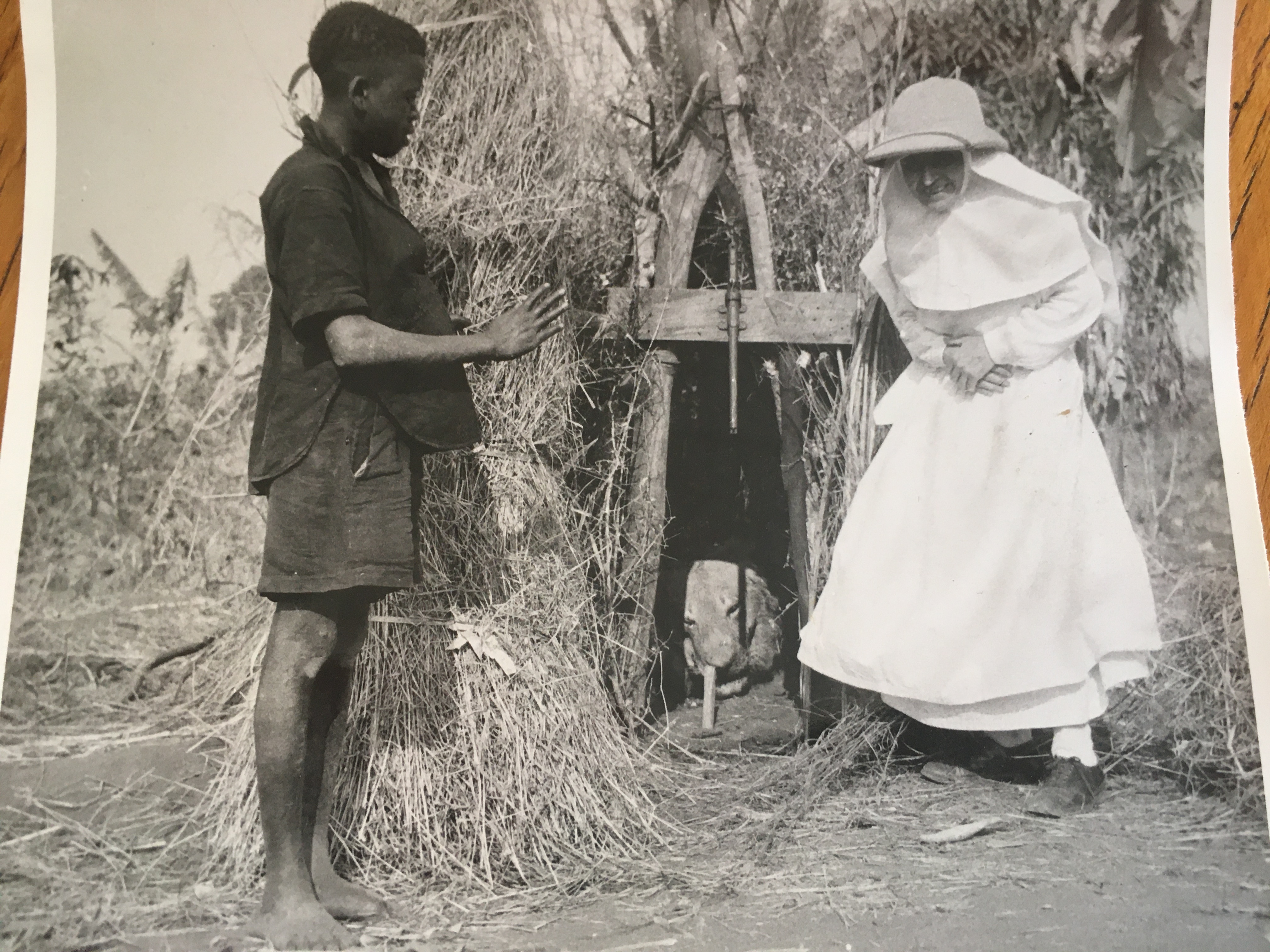 You may not think it possible, but 100 -120 years ago, there were more nuns than monks in Tanzania.
What courage and even more trust in God these ladies had to muster.
Unspeakable diseases, hunger, riots and more than 10,000 kilometres away from home to train people in handicrafts and schools and to spread the word of God, we can no longer imagine that time.
Here a nun with a self firing device (right word ?).
Again and again lions that made trouble. 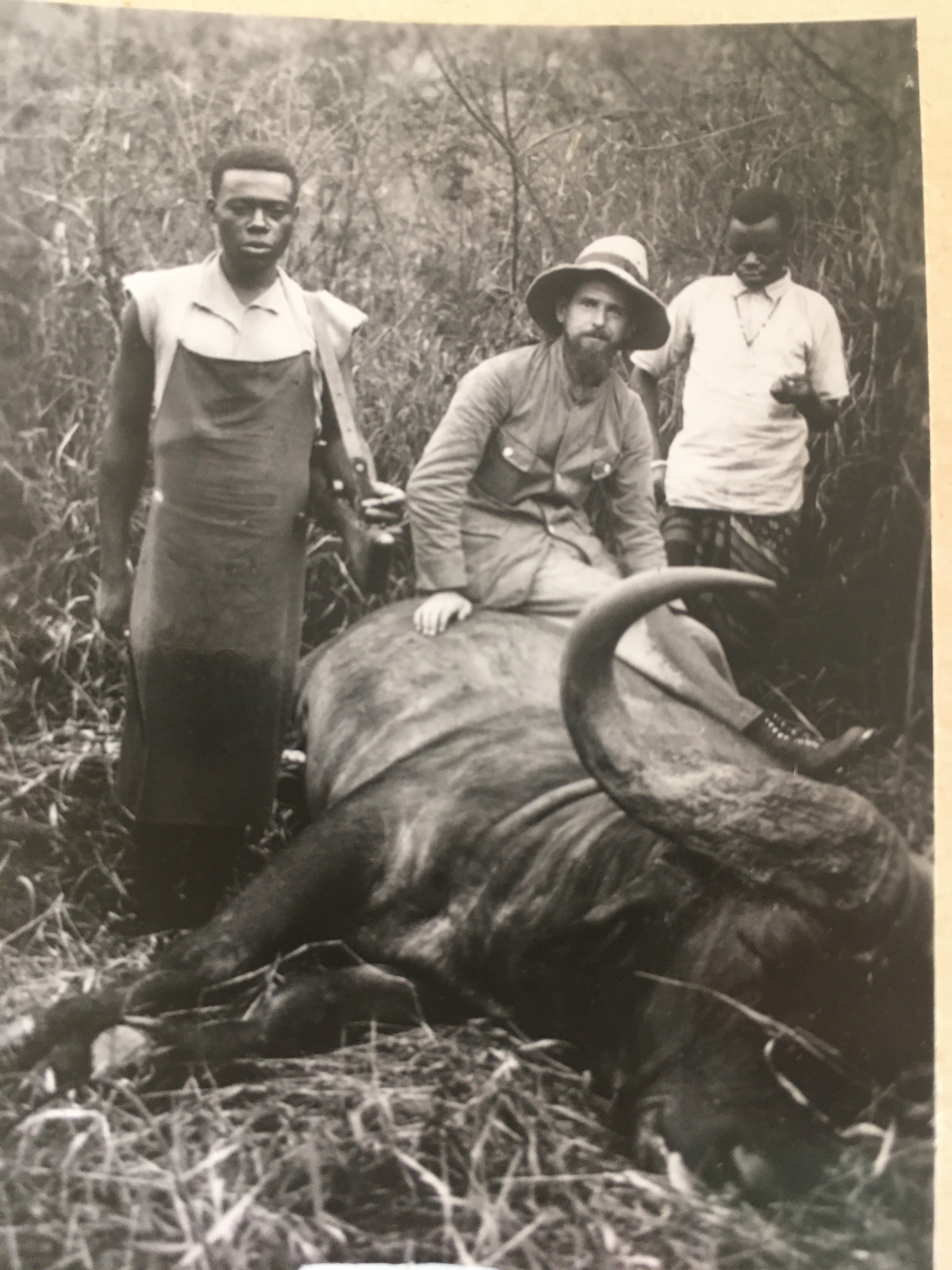 What a joy.
Young monk with a strong cape buffalo. 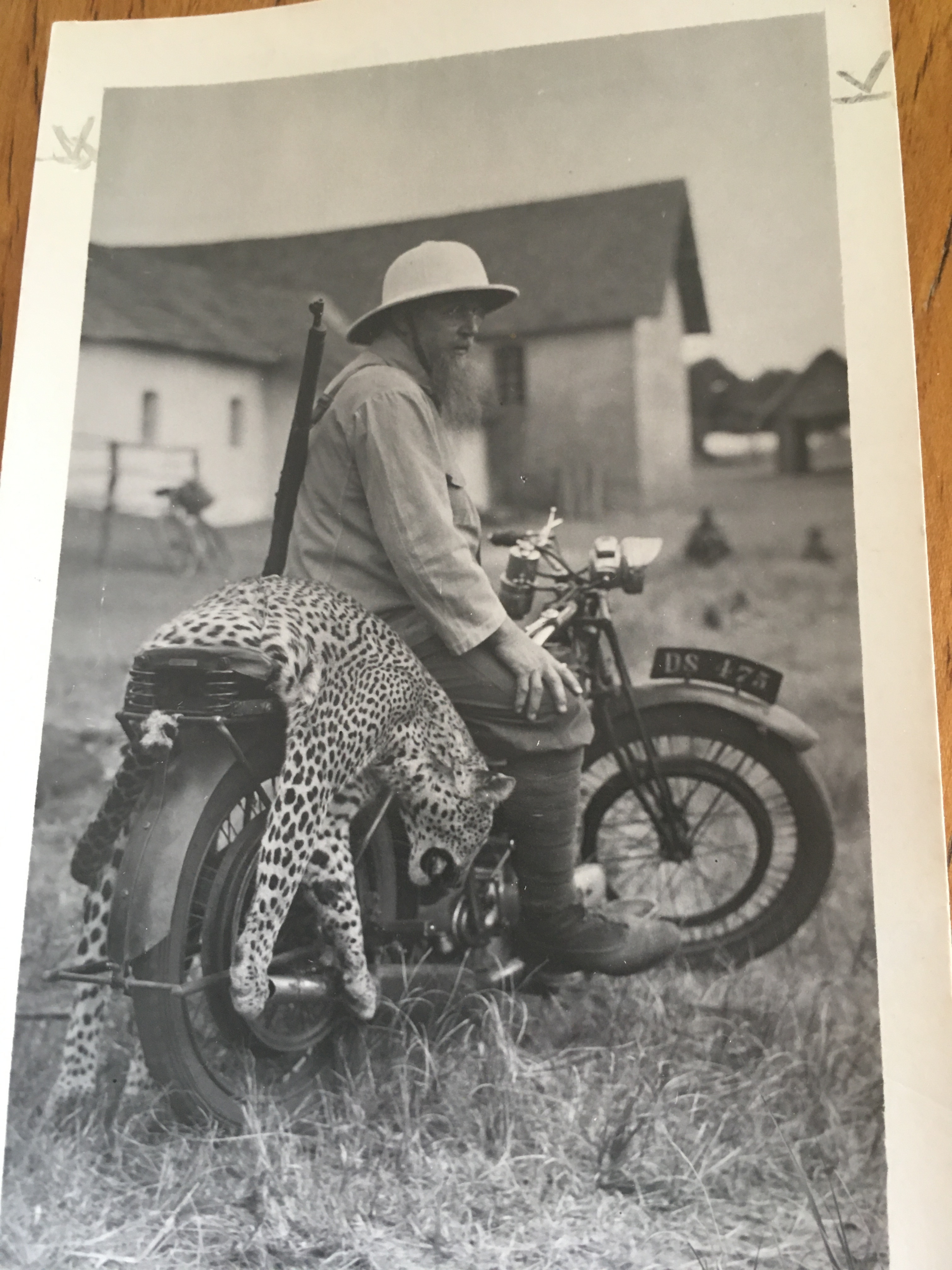 Easy rider
Born to be wild 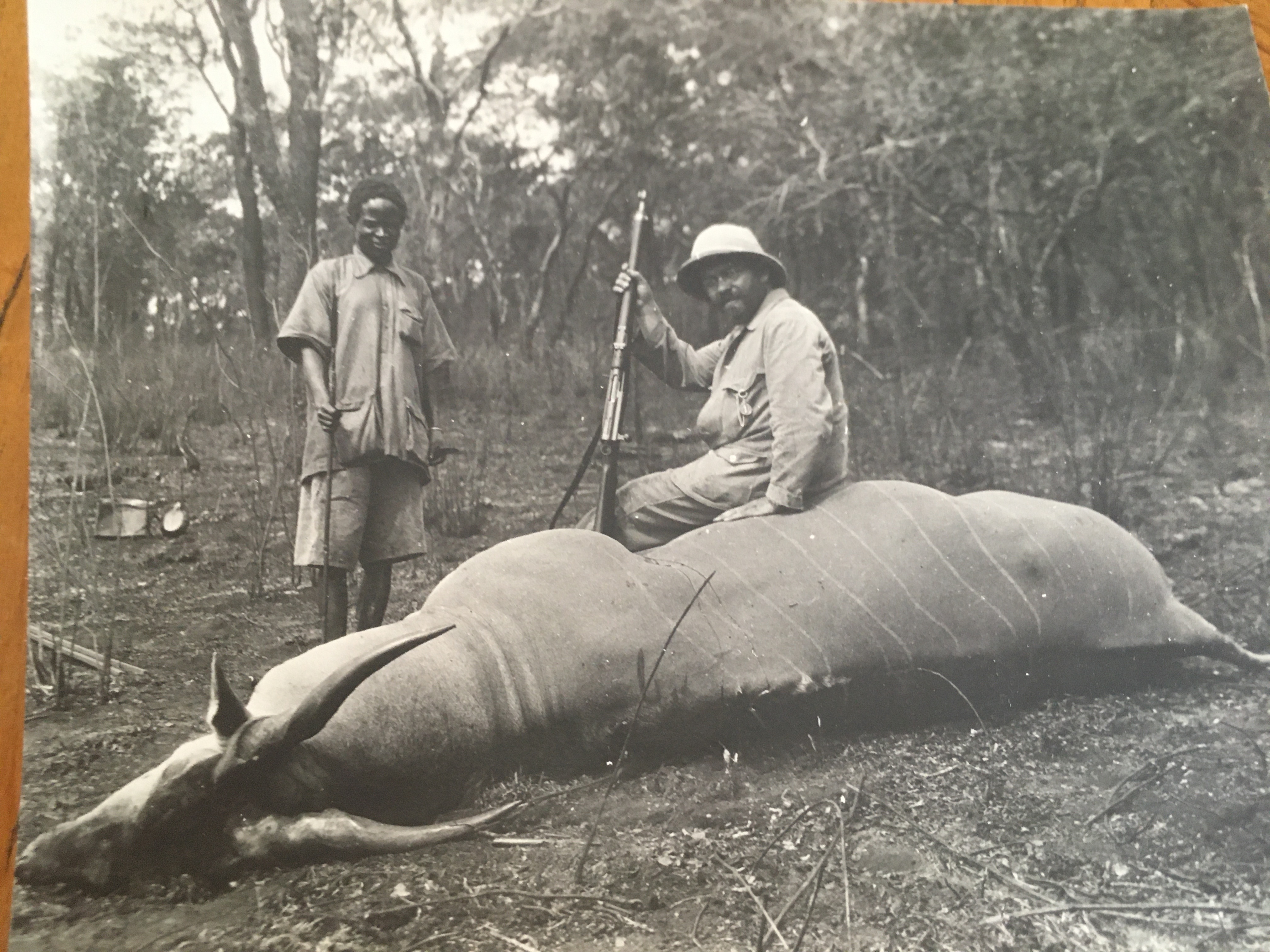 Monk with an eland.
Does anyone recognise the rifle?

It was interesting to hear that the leadership of the mission took place in the monastery St.Ottilien (1 hour drive from Munich today)
But the military operations during the Kaiserreich of Wilhelm II. were not planned in Berlin (Arab riots on the coast and Sansibar,Wahehe,Maji Maji .....) but in Ingolstadt !!! (today the center of AUDI cars )
There is a military museum there, that I would like to visit. 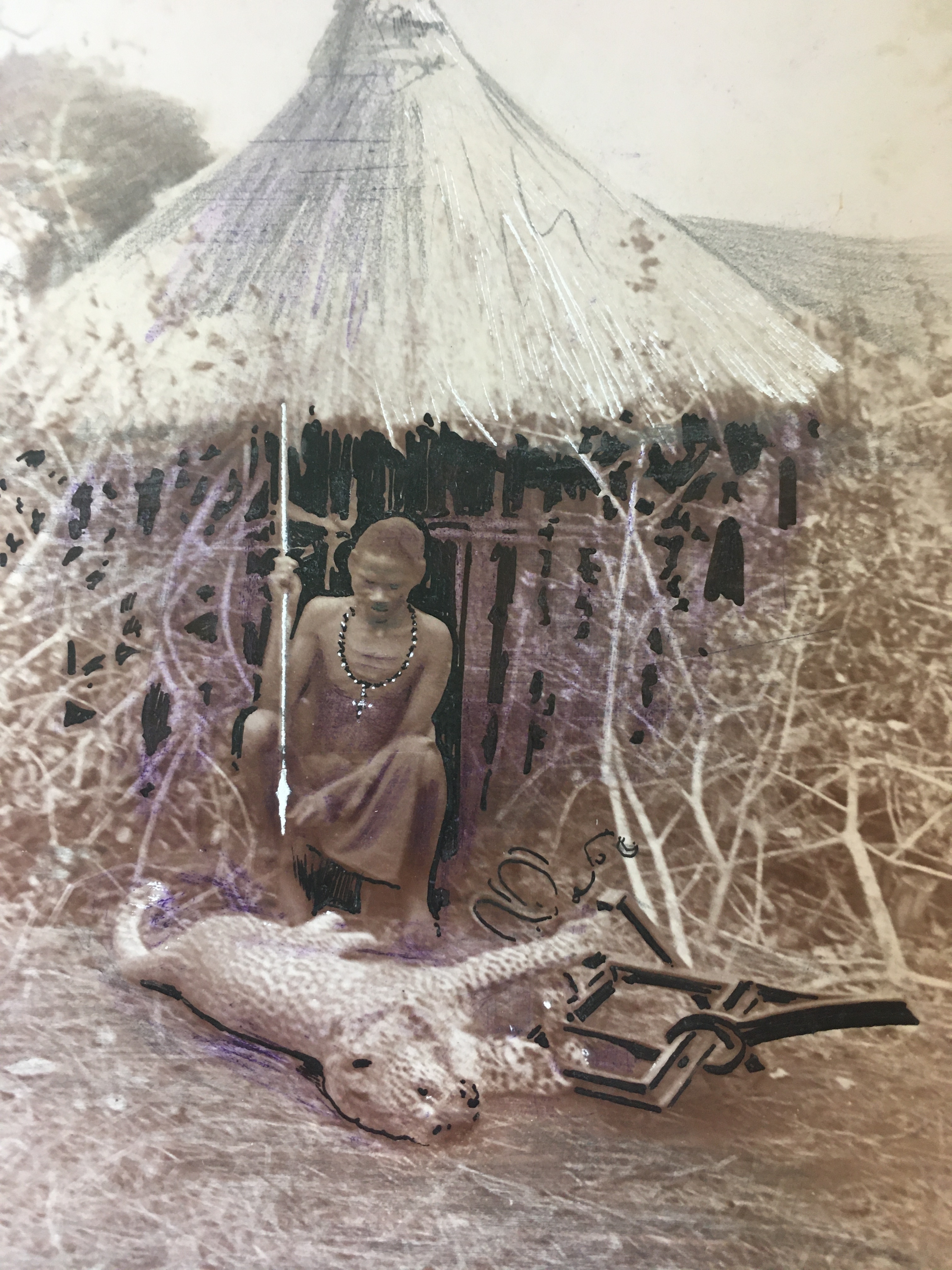 Leopard in the trap. 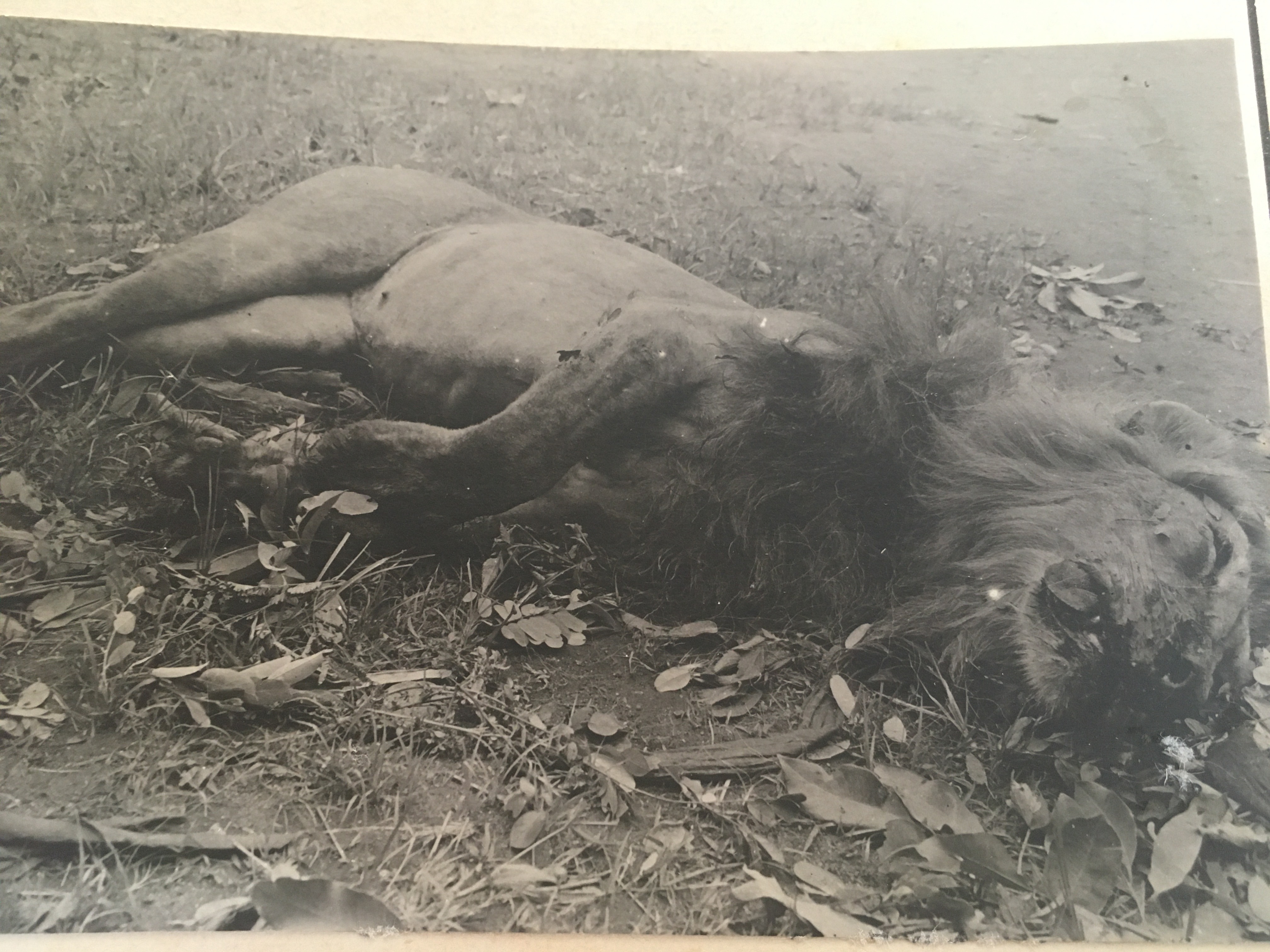 a lion killed by spear in the eye.
On the back of the photo
"this is the lion that ate our carpenter Sebastian". 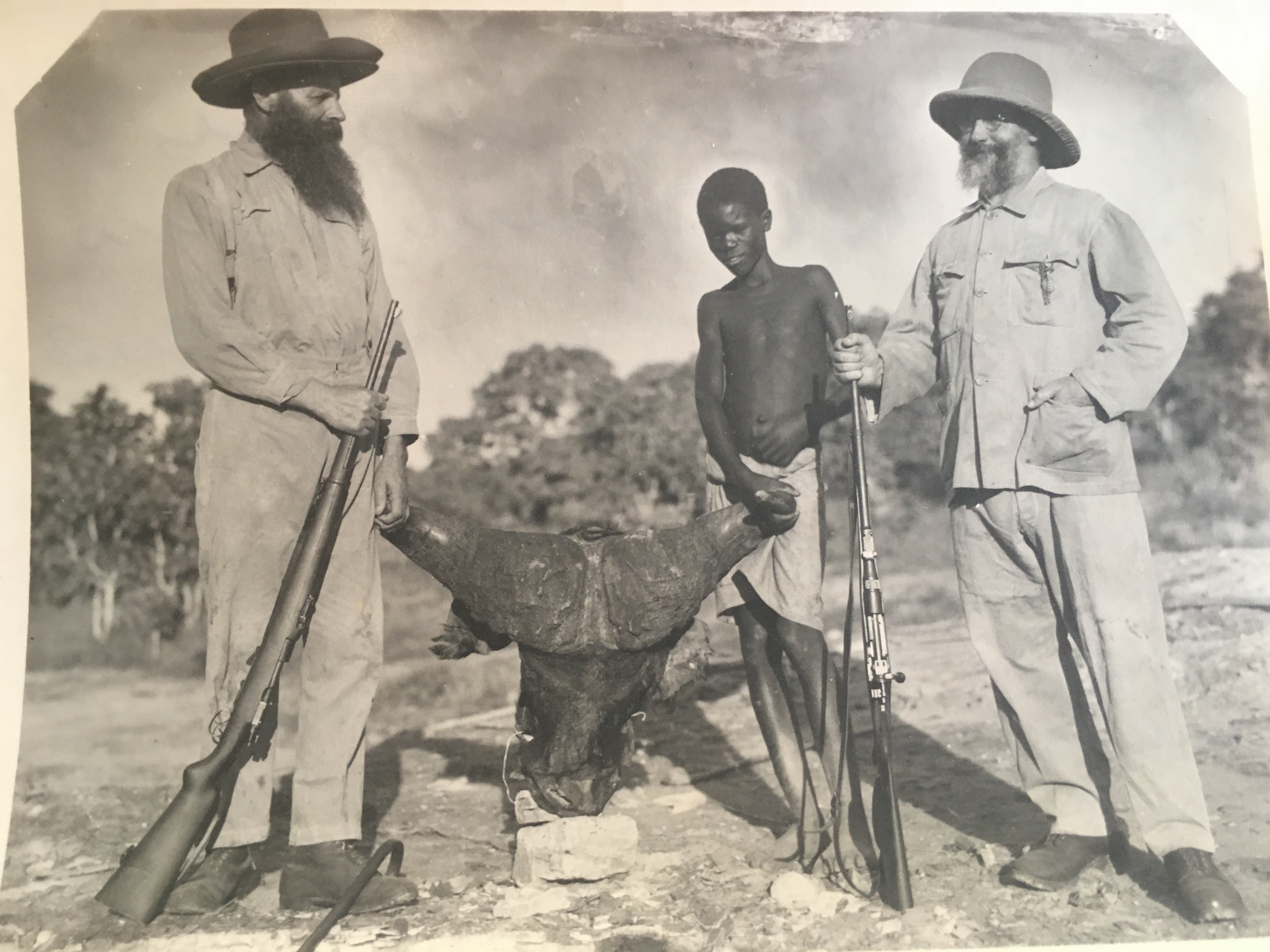 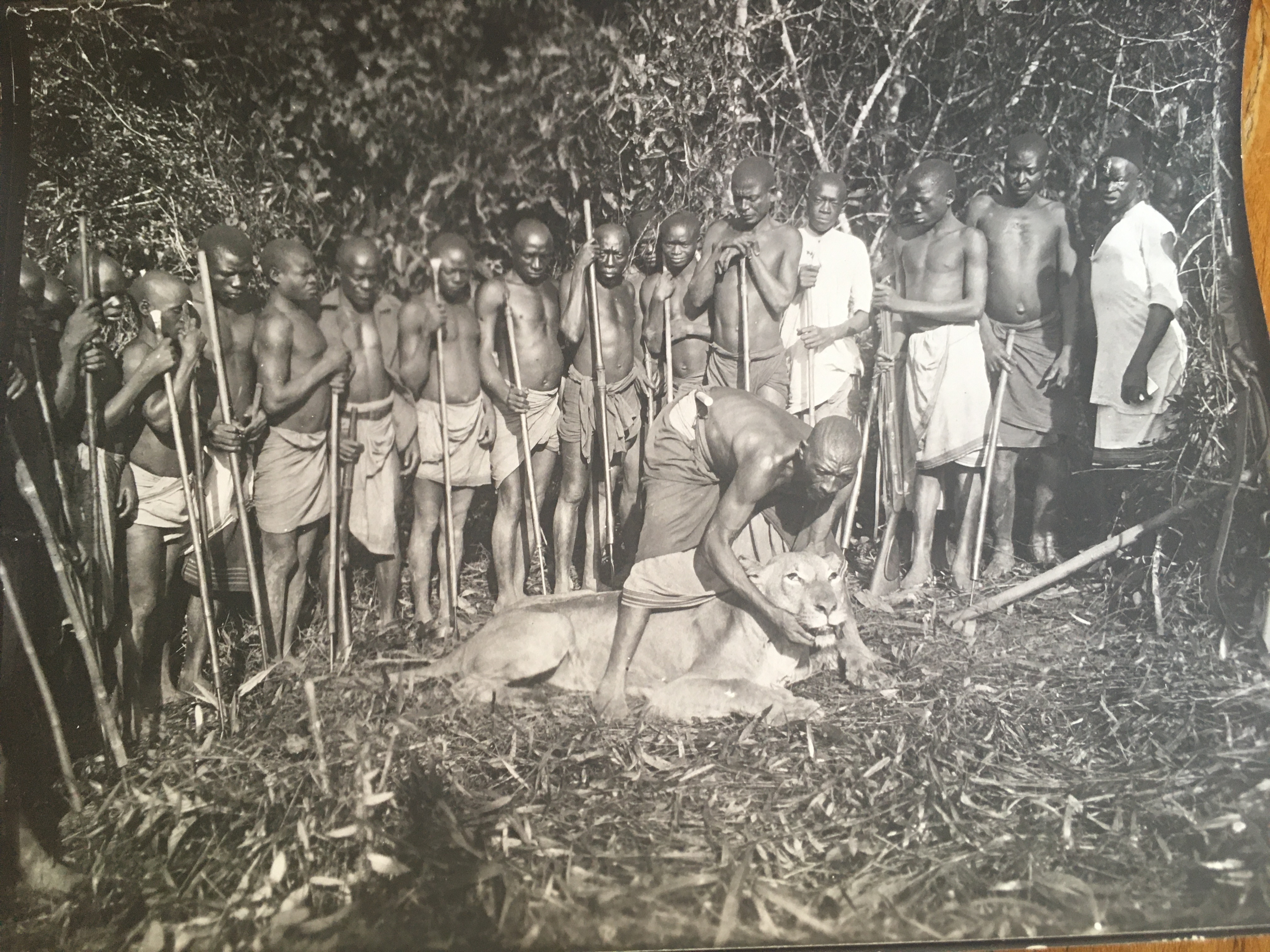 Lions were a real plague for the people in that times 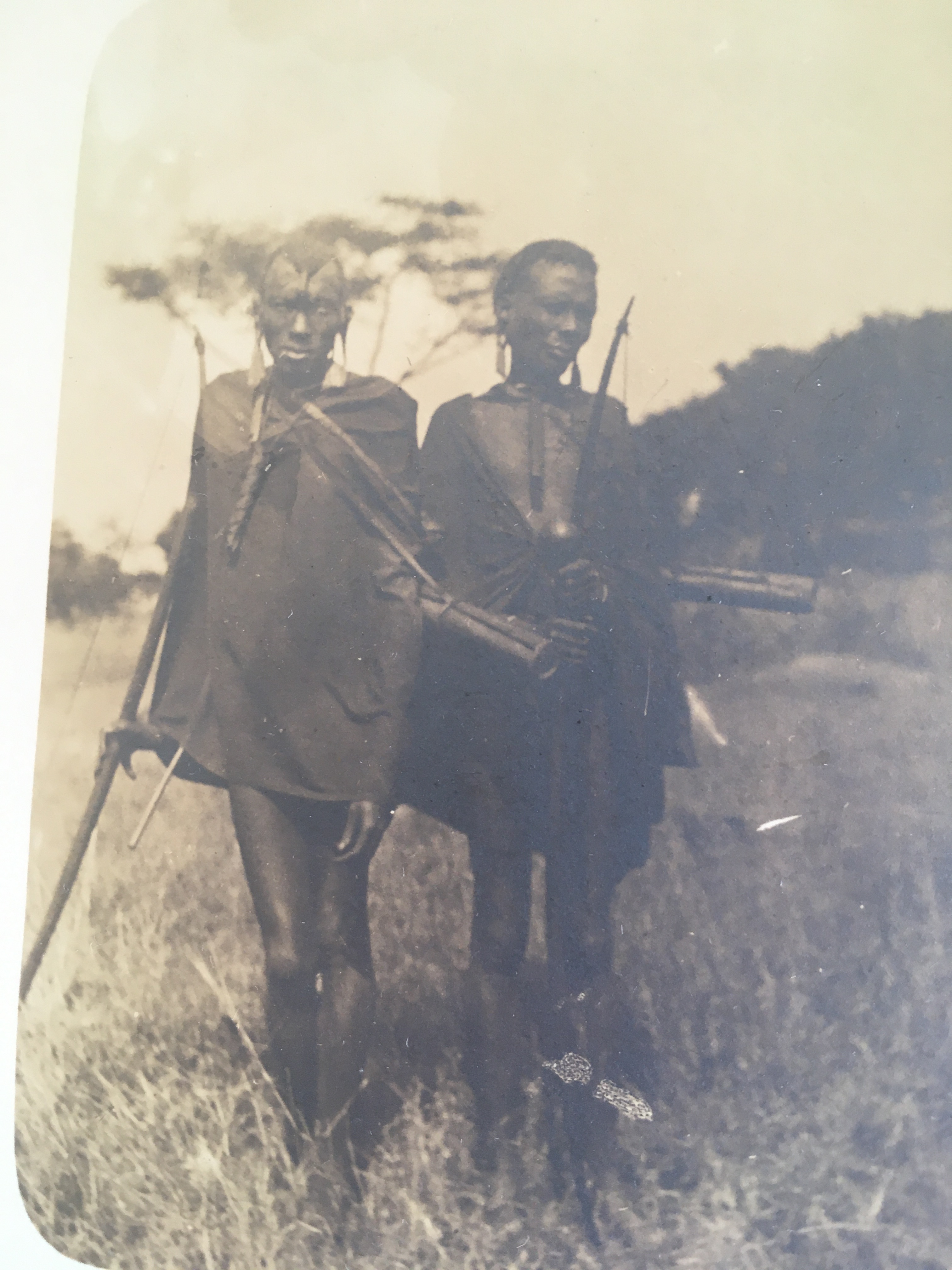 these could be two Wanderobos warrior,
Wanderobos were impoverished Massai.

So ,and now I let it go.
I hope you have some joy, to see some hunting pictures from really old Africa.
Foxi
Last edited: Sep 20, 2020

Super interesting @Foxi , thanks for sharing!

Fascinating. Thanks for posting this!
"And the people bowed and prayed to the neon gods they made" Couple of hippies
"The two most powerful warriors are patience and time" Tolstoy

Thanks for posting the photos and the history lesson. It is very interesting. I was not aware that it was common practice for the early Germans to wear pith helmets. Also interesting to see the square gin trap.

The tribe you have written about as Ungoni, we called Angoni. They were Zulu who broke with Chaka in Natal sometime in the early to mid 1800's. They moved up to Malawi. The following is oral history from my youth. When I go back virtually no one knows this story now. I will try to record part of it here. I do not recall ever seeing this history written down. Perhaps Jerome will save it for us!

Sometime probably after 1850 and before the German's in 1890, a large group of young Angoni warriors left the north shore of Lake Malawi. They were headed for Lake Tanganyika. They defeated all the Bantu tribes they came across, killing all the men and taking all the women and cattle. At some point they returned eastward and defeated the Wausangu at the hill called Chai Moto a couple miles north of Igarusi 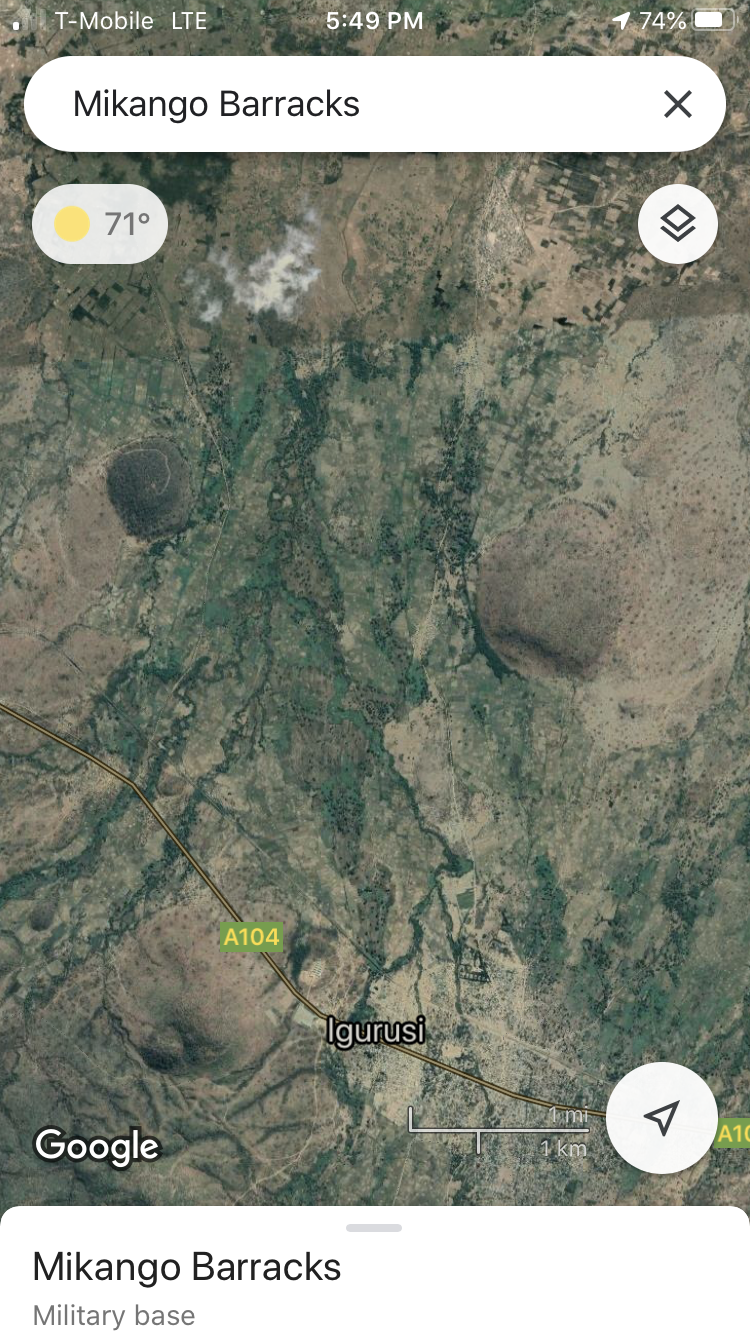 One of these two hills is Chai Moto. I can’t remember which at the moment. There is a hot spring there. Chai means tea. Moto is hot. You can make hot tea with out fire. Thus the name.


They then went up the escarpment near Chimala Tanzania to face the Wawanji. The Wanji drove their cattle out on a point above the Chimala gorge. They dug away the approach so it was a narrow trail. The only way for the Angoni to attack them was going lower than them and being pelted with rocks.

The Wanji women were known for their great woven baskets that would hold water. The women would descend 300-400 meters down a 50-60 degree slope and return with water for the men and the cattle. They had to cut footsteps into the mountain. 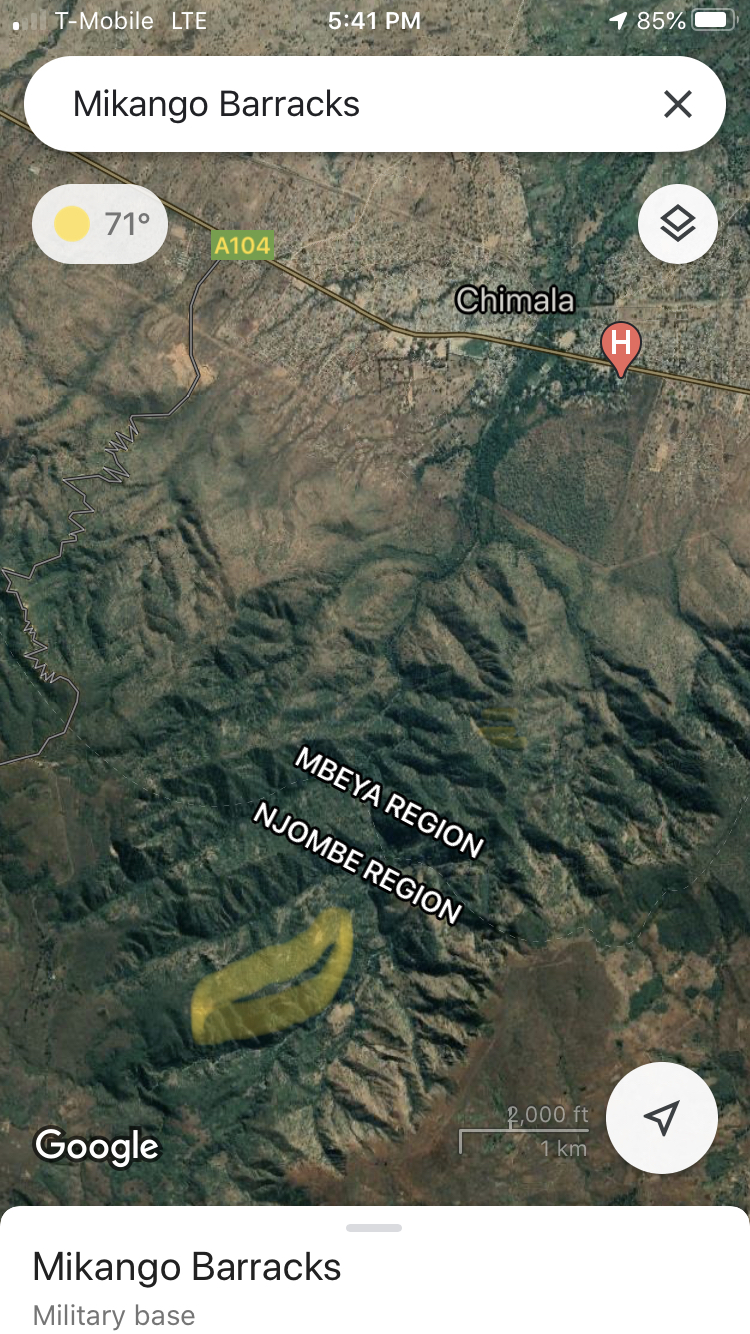 Area in yellow is the Wanji point. 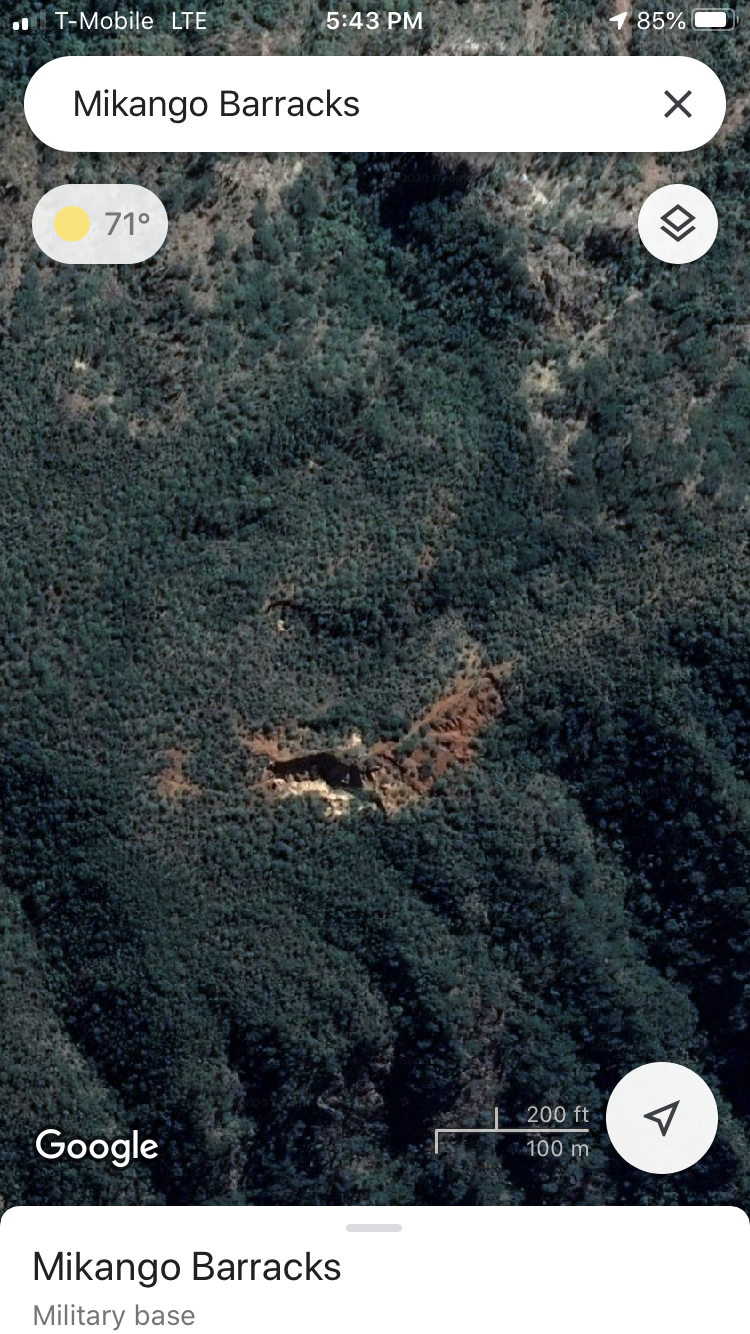 The area of erosion on the west side of the yellow, is the area that the Wanji dug away to keep the Angoni at bay. It has eroded even more but is still visible today.


The Angoni decided it would take too long to defeat the Wanji, so they abandoned their siege and moved east around the Eldon Plateau to the Makambako Gap. (Same place von Letow Vorbeck went through but in reverse in 1918) The Angoni then went south through Njombi to Songea. They thought the area around Songea was great for grazing their cattle and they had all the women they needed, so they settled there instead of returning to Malawi.

Many of the Ungoni that the Benedictines ministered to would have been involved in the great raid across southern Tanzania. It would be interesting to know if any of that history recorded by the Monastery at St. Ottilien.

All the best and thank you for the information and photos. They have brought back many fond memories!

Good on both of you!! No one knows either of these histories, and in another generation they may be forgotten entirely. Both of you need to write articles on both subjects. SOON!
"We sleep soundly in our beds because rough men stand ready in the night to visit violence on those who would do us harm" American Novelist - W. Churchill

Thanks to both of you! Excellent.

Love seeing old articles and pics like this, thank you for sharing!
John 3:16
S

Thanks to both Foxi and Wheels. Fascinating stuff.

Very interesting. I never thought of Monks as hunters. Kind of goes against the religion belief.

I never thought of monks as hunters either. Some great pics. Thanks for sharing the history with us too.
Bruce

The rifle with the eland looks like a k11 Swiss, shooting the 7.5x55 cartridge.

Great posts of both gents. Would love to read more indepth articles of yours! Pls keep it coming.

The other rifle appears to be a magnum mauser and judging from the long thin barrel and the claw type scope mounts my guess is that it may be a 280 Halger?

Fascinating story! Thank you for sharing

Fascinating! thanks for the history lesson. I have had the privilege of hunting our Canadian elk with a Benedictine monk who accompanied my father and me on some hunts until he retired from hunting at 80 years of age. He also was a WWII Canadian Air Force veteran, and our parish priest serving the Catholic citizens of our small rural town. A very interesting man of many talents. Knowing him makes me feel more connected to this story.
You must log in or register to reply here.