TANZANIA: Silence In The Selous

It was silent and the sun was setting. The truck was quiet as my crew was exhausted. We had been out all day and we had tracked buffalo without getting a shot. The Selous didnt disappoint, proviing us an excellent #safari day. We saw many species from #hippo to #elephant . But the buffalo just wouldnt cooperate.

Driving along the river about 1 kilometer from camp I saw a flash of jet black hair in the bush below us. It was a cow #buffalo , she was trying to cross the trail back to the thicket. She had been the first to finish drinking in the crocodile infested water below. I readied the doc sitting next to me. He prepared to climb off the car, I loaded his #gun and then grabbed my doublerifle. My tracker knew the drill and my driver was focused on me in the side view mirror waiting for the signal to stop. I gave it, he did, we jumped.

The toyota rumbled off as my tracker appeared beside me chirping at my driver on the radio "200, 200, copy"... meaning drive 200 meters, switch off and remain quiet. The buffalo calmed down as the vehicle moved on. We moved back down the two track and circled the buffalo. There was no wind and darkness was fast approaching.

The 15 or so buffalo had grouped together as they often do when confused. They were looking towards the vehicle. As the sound of the engine left them, we had flanked them; the Doc and I were looking for a bull.

The bull had a white face and was broadside. He was old and big. My hunter was on the sticks and looking. He knew his target and I asked him to shoot. There was a delay. I repeated myself adding the word NOW.

The bullet hit home and the buffalo ran straight at us. It was closing the distance but so were the other animals behind him and we didnt need multiple blood trails. Almost instantly the herd dissapeared through a washed out ravine. I ran after them and saw the bull at the back of the group. I fired a shot on the move and missed.

Irritated at my shooting I ran into the bush after him. I lost the track then my crew. I called for a flashlight. We found blood and luckily I found reality soon after. It was too dark, we backed out. The next morning would prove even more exciting.

Daylight found us at the same spot. The sun was up but the bushes seemed even thicker then they did at dusk the day before. We slowly moved on the trail of the bull. The trackers did an excellent job as usual and led us into the thickest of the thick bushes where the buffalo had bedded down and spent the night.

I smeared the still wet blood between my finger and thumb showing the evidence that it wouldn't be long... and this was going to require more ammunition.

At this time we crawled forward on hands and knees. Our attention was focused in front when the game scout at the end of our line saw the buffalo. The animal had circled. 4 out of 5 of us had crawled past him no more than 30 feet. I rolled back on my hips as the game scout pointed and inched behind the hunter. I saw it was bedded. It was way too close, impossible to see, and very much alive. There was no chance to do or say anything.

It had to have heard us approach and I'm convinced that we were spared a charge due to the fact he circled and bedded down a second time looking back the way he came. In the dark he didnt complete the circle, he did more of a fish hook. Leaving a gap for us to crawl right next to him and past his current location. He just didnt sense us due to the dense cover and the wind in our favor. All of this dictated mostly by luck and a .375 bullet in his body (those make it hard to get out of bed in the morning).

I unloaded both barrels into the middle of the blackness. Gunpowder , dust and buffalo was instantly everywhere.

The animal took 1000 grains of bullet then stood up... moving to our left where I hit him again. At this time Doc saw the movement and made out the creature, he cycled 2 shells into him (he finally had a decent angle on him as I had moved a little when reloading).

We scrambled forward as best we could. The buffalo had finally fallen. Doc finished him off at point blank range.

All had the look of 'what the hell just happened' on our faces. This look is known best by the handful of hunters that have experienced real Africa close up and personal. It's a surreal moment that cant be enhanced by words.
Everything was silent again. 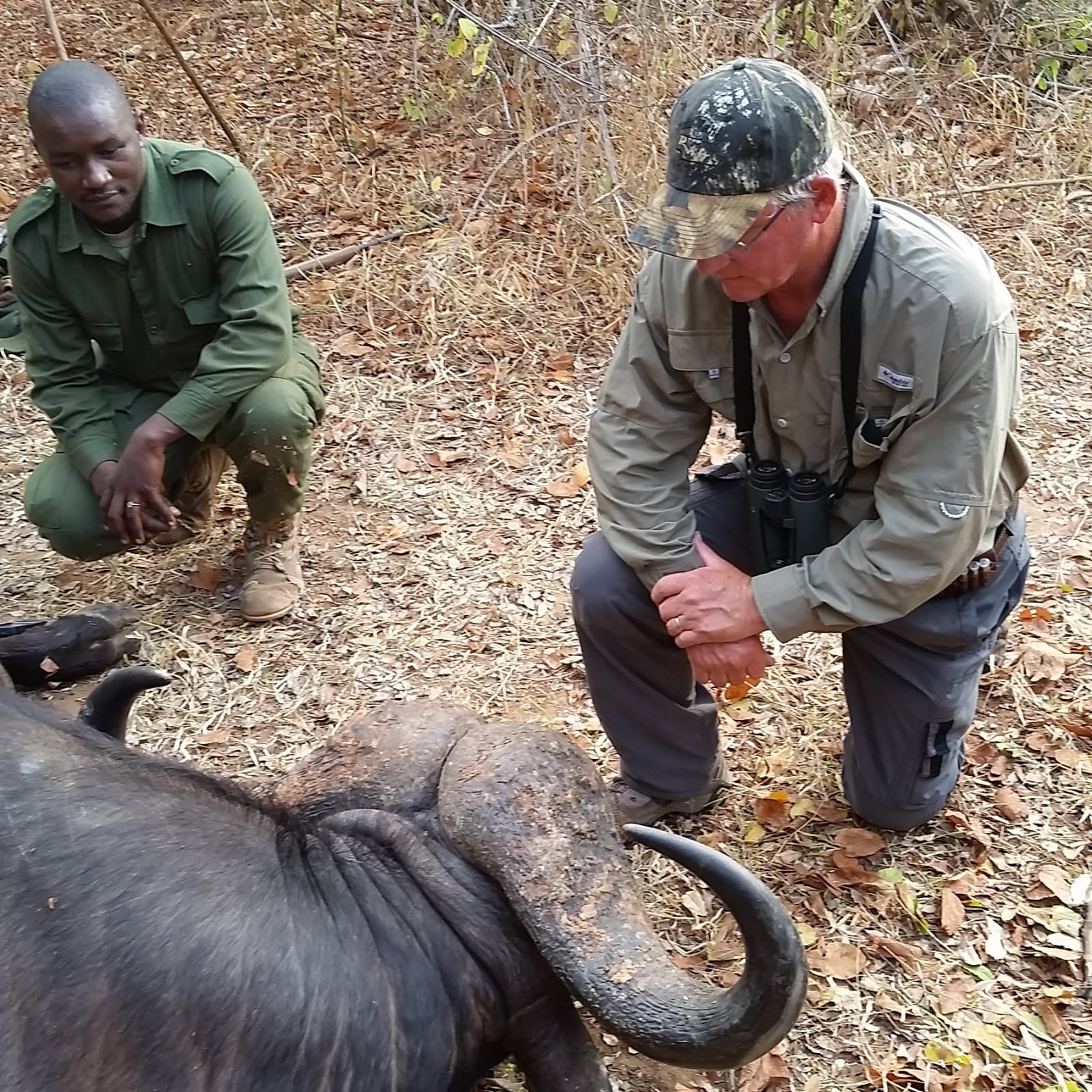 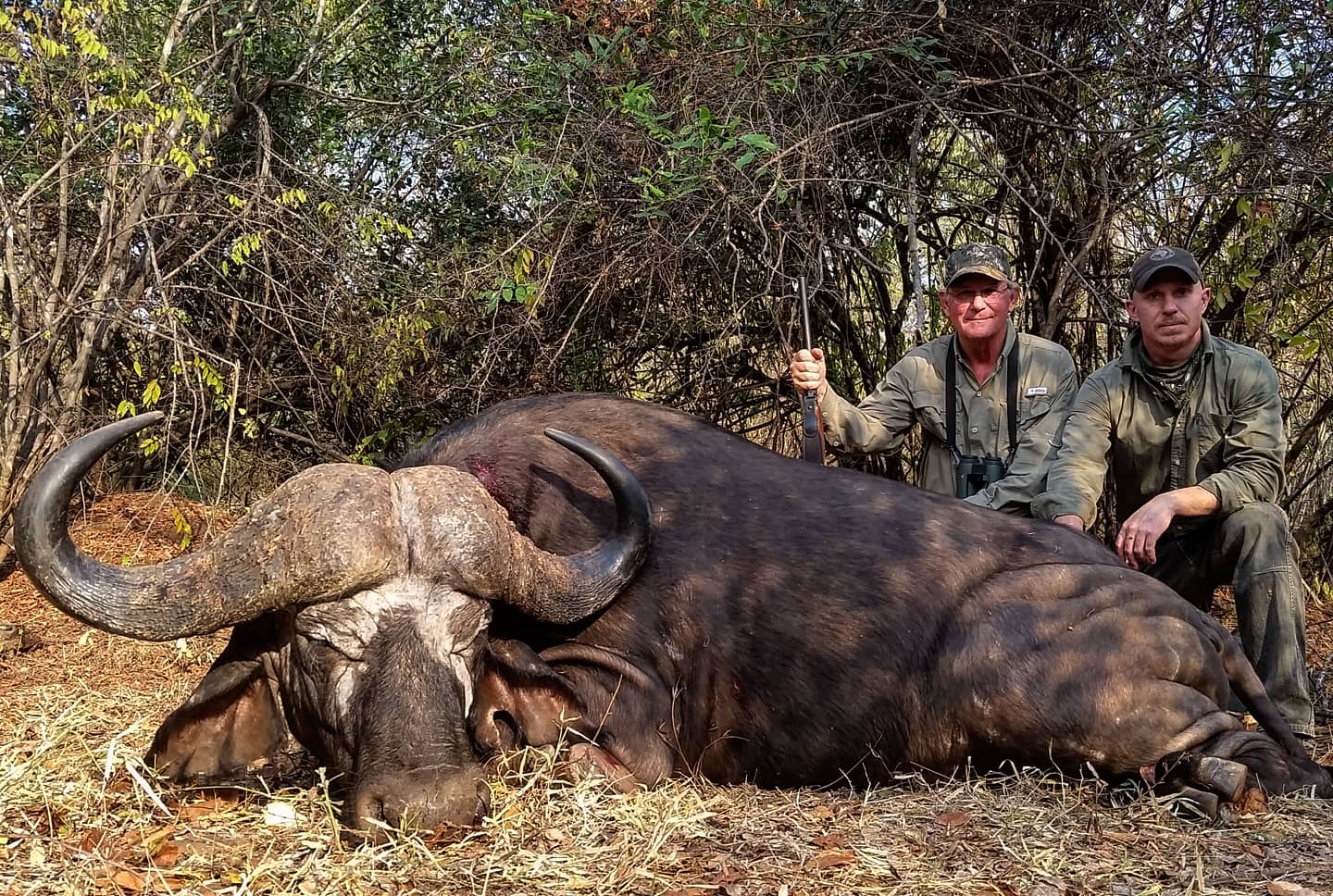 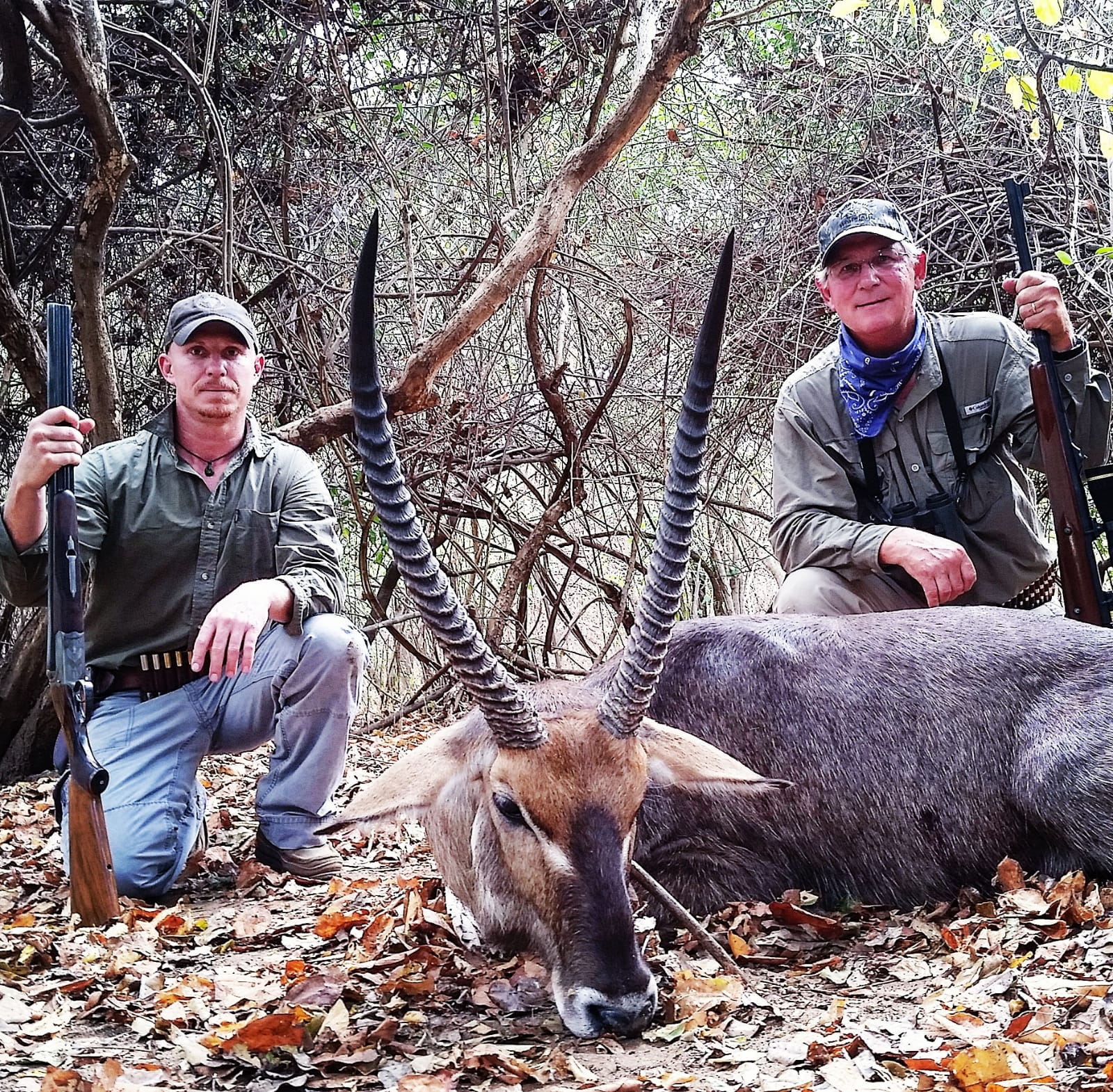 What a bull!
What a story!
Now please give us the details on the lovely waterbuck bull

Enjoyed the write up very much.
What age do you estimate the Buffalo to be?
“They that can give up essential liberty to obtain a little temporary safety deserve neither liberty nor safety.” Benjamin Franklin 1759

kudukid said:
What a bull!
What a story!
Now please give us the details on the lovely waterbuck bull
Click to expand...

Very nice Trophys and a good read. Thanks for sharing!

Congrats to all and thanks for posting, very nice bulls.

Bullet Safaris said:
I may have had to even get my shoes on...
once we got our act together we moved on him and got a shot is short order.
Click to expand...

This sounds like my most effective duck call. Which is get out of the duck blind, unload my shotgun, and act like I am done for the day.

Jfet said:
This sounds like my most effective duck call. Which is get out of the duck blind, unload my shotgun, and act like I am done for the day.

And the more distance you put between you and your unloaded shotgun, the better it works from what I've found.

Jfet said:
This sounds like my most effective duck call. Which is get out of the duck blind, unload my shotgun, and act like I am done for the day.


maybe someday I’ll get to hunt a Dugga. That’s a helluva an experience.

Well done gentlemen, a very fine bull. Having also done a followup on a buff it certainly adds spice. Where did doc's first shot hit the evening before?
Carruthers

this cape bull ought to be on the Tanzania stamp. Everything is perfect, from the white face to the ragged ear, the big boss

Love the buff.
Tommorow is promised to no one. Go live your dreams.

Both fine fine trophies! Congratulations to you and the Doc!
Africa on my mind.

Just curious one the last picture what double is that?

Thanks for sharing!
John 3:16
You must log in or register to reply here.

Silence in The Selous
2

TANZANIA: Buffalo In The Selous

mbogo45 Jager Waffen74 mbogo45 wrote on Jager Waffen74's profile.
Appreciate your info and feedback, I looked at some European websites to try and get info on the value of this particular Steyr. Further input from you on it's value would be appreciated as you have a bunch of them. I assume you collect the Steyr Luxus for a reason ---they are a finely built rifle.
Thursday at 1:34 PM •••