i just recently received my ivory back. i instructed animal artistry not to touch my ivory and to send it to me as is. when i received my tusks they were both 74" and both had 18" circumfrences. both had metal rods attached to them and were filled with a cement to attach said rod. both tusks weighed exactly 87 lbs with the cement. the nerves when removed from the tusks were less than 14" long. is it just me or is something terribly wrong here.

i've never dealt with ivory before and i desperately want your opinions on whether or not i truly have my real ivory or if it was sold. what should i do, or is everything ok?

Not possible!!!!!! Unless they have been cut a lot shorter. If you have pics of your ivory, you should easily be able to match them.
O

I agree with TMS! You must has some high Res pictures of your tusks? Even in the animal. The striation marks on the tusks you have been sent cannot match those of your pictures not to mention the shapes if you took pics of them out of the skull.
Tusks in Zim have a registration number stamped on them by National parks... do the Moz ones TMS?
What of your CITES tag? It should also show the weights etc.
Mistaken identity?!!

Man that stinks, I hope you can dig and find more info
John 3:16

Sorry to hear tap but as everyone mentioned it is not good news. Have the tusks been cut? In regards to the pictures here is a thread discussing a similar issue: Are these the same tusks?: http://www.africahunting.com/threads/are-these-the-same-tusks.16700/. Do you have any pictures? I looked again at your Elephant and the tusks definitely have certain prominent characteristics unique to them which should help you come up with a definitive answer. Share some pictures with us here of the tusks that you received and we can also give you our opinion.
Jerome Philippe, Founder of AfricaHunting.com

As I recall One of your tusks was broken when the Bull fell after the shot.
That can not be faked.

I hope you have some close up pictures.

You can not fake the wear on the ends of those tusks either. They are like finger prints.

I hope you get the proper tusks. 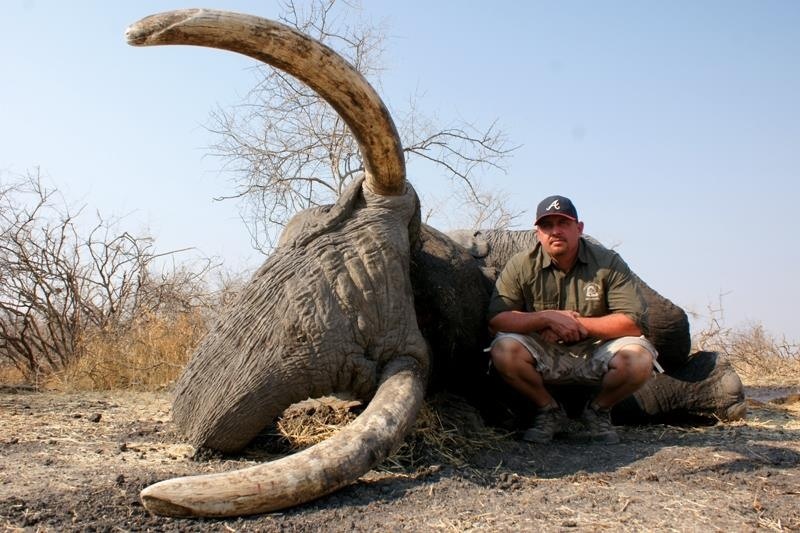 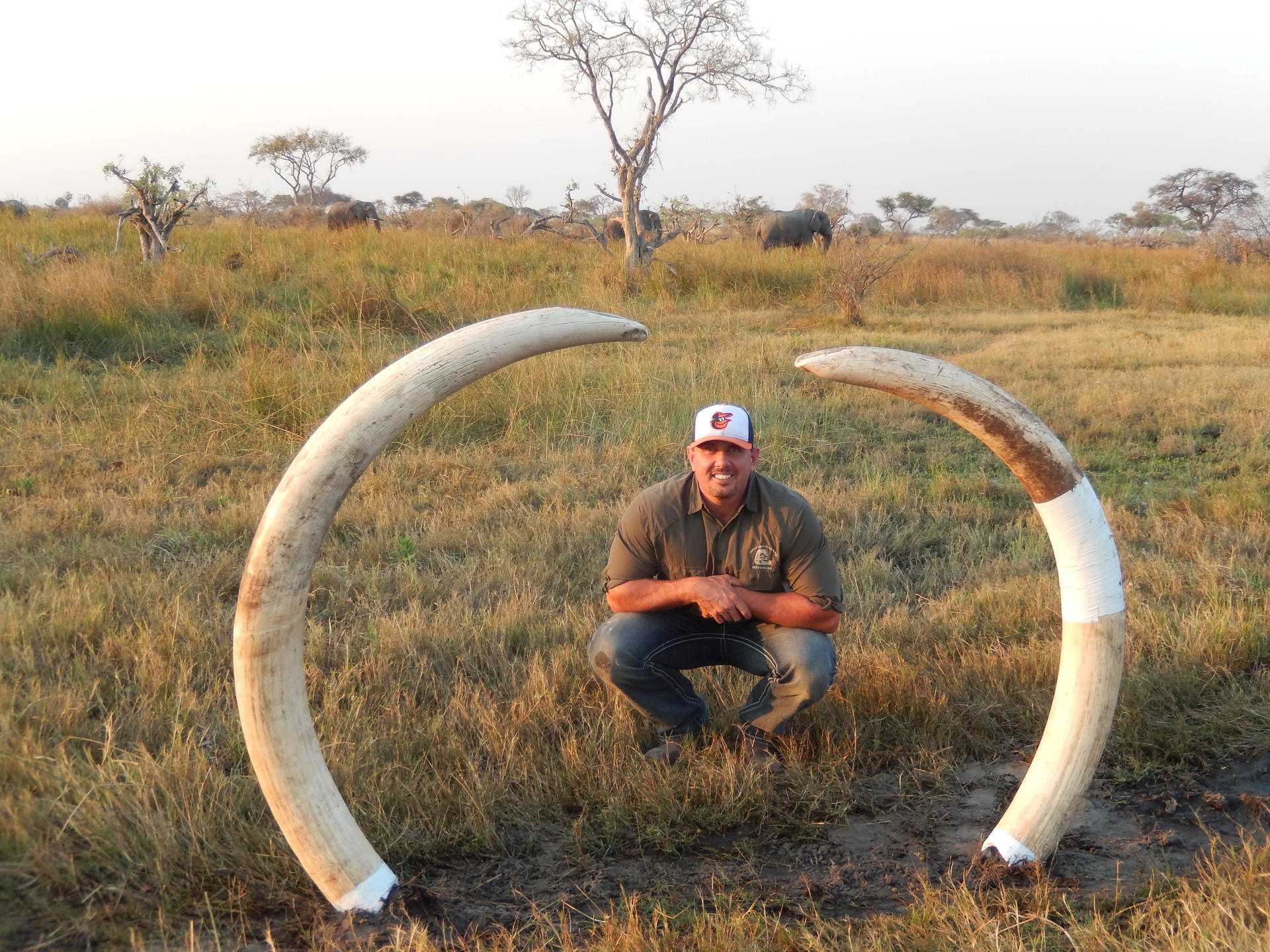 i will post close up pics of the tusks later today. mike boyce with animal artistry said they trimmed a few inches off so that i would have a flat surface to make a pedestal mount but that they changed very little. so i contacted cobus calitz and he said that muchaba took off at least 7" or more to prevent the ivory from splitting. i still cant account for the 1.5" girth difference. cobus has replicas that muchaba made at the time i shot my ele so im having him measure them so that i can get an idea if my memory was that bad or if something else has happened.

thanks for your help guys. all i know is that two chinese men met me in maun 3 days after i shot that bull. they had pictures that locals had taken and they knewme by name and offered me $1,000,000 for the tusks. i turned them down without hesitation but since that day ive worried if i would ever see my real tusks again. maybe in the back of my mind im just worried that the black market got my ivory where in reality im just being paranoid??? who would pay one million for those tusks? it makes no sense!

Mochaba took 7 inches off to save them from splitting.
OK,
Where is the seven inches of tusk? In the shipment?

Maybe someone is skimming the shipments?

That is a very nice bull you got. Shame that someone is messing with your ivory

Sorry to hear about this TAP. A couple of things don't sound good here.

1. The taxidermist needs to refund your money for messing with your ivory if you told them not to.

2. The growth point on a tusk is lower at the front than the back. If you want the ivory to stand up, the back part of the tusk will have to be evened up with the front of the tusk. Notice the taper at the growth line of the Kilimanjaro bull. These may be cracked some but they are over 100 years old. Not sure if I buy the argument that they had to be trimmed to keep from cracking. At the very least, they owe you the inches they trimmed off. It shouldn't go into their pockets. Especially if you told them not to touch the ivory. If they took 8" off the shorter tusk to make it level, why take 11" off the longer tusk? To make them match? Sounds odd, like 3" extra went in someone's pocket. 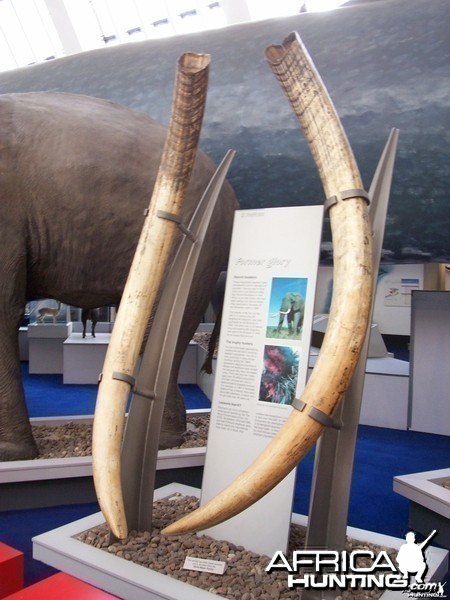 Also, ivory doesn't have to be trimmed if it is going to be hung. Example below has probably been trimmed, but wouldn't have to be if two rings were used on each tusk instead of a ring and a base. 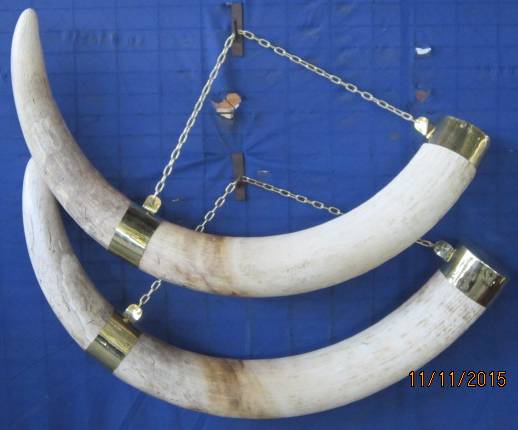 tap said:
thanks for your help guys. all i know is that two chinese men met me in maun 3 days after i shot that bull. they had pictures that locals had taken and they knewme by name and offered me $1,000,000 for the tusks. i turned them down without hesitation but since that day ive worried if i would ever see my real tusks again. maybe in the back of my mind im just worried that the black market got my ivory where in reality im just being paranoid??? who would pay one million for those tusks? it makes no sense!
Click to expand...

3. Not to dispute your recollection, but 1 million Pula might make sense. 1million USD seems illogical.

4. 1.5" of circumference seems like a lot. Would be nice to hear from some of the elephant guys.


5. Some old timers told me years ago that you might loose around 5% weight in a 60-90 day drying period and possibly 10% after a couple of years when it stabilizes. Not sure if this is correct or not. Would like to hear if some of the elephant guys would chime in here.

6. Ole Bally mentions the die stamps on the ivory. I presume Botswana does this. Do you have photos of this from when you were in Botswana and does it match the ivory now?

7. Your photos of the tips and shattered pieces should confirm things for you.

Hope you get this cleared up. Sounds like there should be a "come to Jesus" talk with the taxidermist.
Last edited by a moderator: Dec 1, 2016
And here I am, returning to Africa of many faces;.... the sloe-eyed temptress with flowers in her hair who stole my youth and my heart, and left me an old man with a kaleidoscope of conflicting memories of many dashed hopes and some fulfilled dreams. E. Echols

Wheels said:
Some old timers told me years ago that you might loose around 5% weight in a 60-90 day drying period and possibly 10% after a couple of years when it stabilizes. Not sure if this is correct or not. Would like to hear if some of the elephant guys would chime in here.
Click to expand...

My tusks show the weight - it's been engraved on the tusks along with the serial number, by the Zimbabwean authorities. I'd be surprised if you'd see another 5% drop in weight over a few years after the initial shrinkage - it would make the weight misleading and worse, they might try to argue they aren't the same tusks!
S

Muchaba? Who is Muchaba? 7 inches to prevent splitting?? What a load of bullsh@t! Calitz safaris is well respected company, they should be able to give you a proper explanation.

TMS said:
Muchaba? Who is Muchaba? 7 inches to prevent splitting?? What a load of bullsh@t! Calitz safaris is well respected company, they should be able to give you a proper explanation.
Click to expand...

Mochaba is the D&P Taxidermist in Maun, Botswana. The company that does 90% of the business.
S

@BRICKBURN , AH is busy having major spam attack. I see you dealt with it already, thanks.

I have to give credit to Wayne, we have been getting spammed pretty heavily, I was reading this post last night and went back to the home page and there was a ton of spam.

Onto the topic here, that really stinks about your ivory, something is definitely up. Hope you get to the bottom of it, 86 & 87 lbs is a monster by anyone standards!
R

I tried to view the page the other night, and could only get a bunch of writing in Korean. Is that what you guys are talking about?
R

Debbie Peake (Mochaba) has a Stella reputation for many year in the hunting industry. I hope this gets ironed out.....

Just to clear things up. cobus sent me pictures of the replicas that muchaba sent him. the circumfrence he had was 18 3/4" and 18 1/4". thats not too far off the circumferences i have. the stamps match what i have on my tusks and cites paper work. the ivory is definitely not plaster or any other material and from digital close up pictures of the field ivory compared to what i have its all the same. the only discrepancy is that i lost so many inches to trimming. that i am very much dissapointed about but i do know that michaba was very professional in every thing they did for me. i never gave muchaba instructions not to trim my ivory so i dont see why they wouldnt have. cobus is very well versed kn the ways of the trade in botswana and if he says they trimmed several inches off to prevent splitting then i believe him. cobus gained my confidence in botswana and i will never doubt his word. he is a very good man. i was simply dissapointed beyond belief when my tusks lost so much length zand some girth. i do know that when we left the field there were already 3 to 4" cracks going down my tusks. cobus kept the ends moist and wraped for protection at all times to prevent further splitting so i doubt very much that muchaba did not cut them to stop the splitting.

i gave detailed instructions to animal artistry not to cut my tusks. however the tusks they had, unknown to me, had already been trimmed. animal artistry, i believe, did their best to give me tusks ready to mount and did everything in their power to give me a perfectly preserved memory. 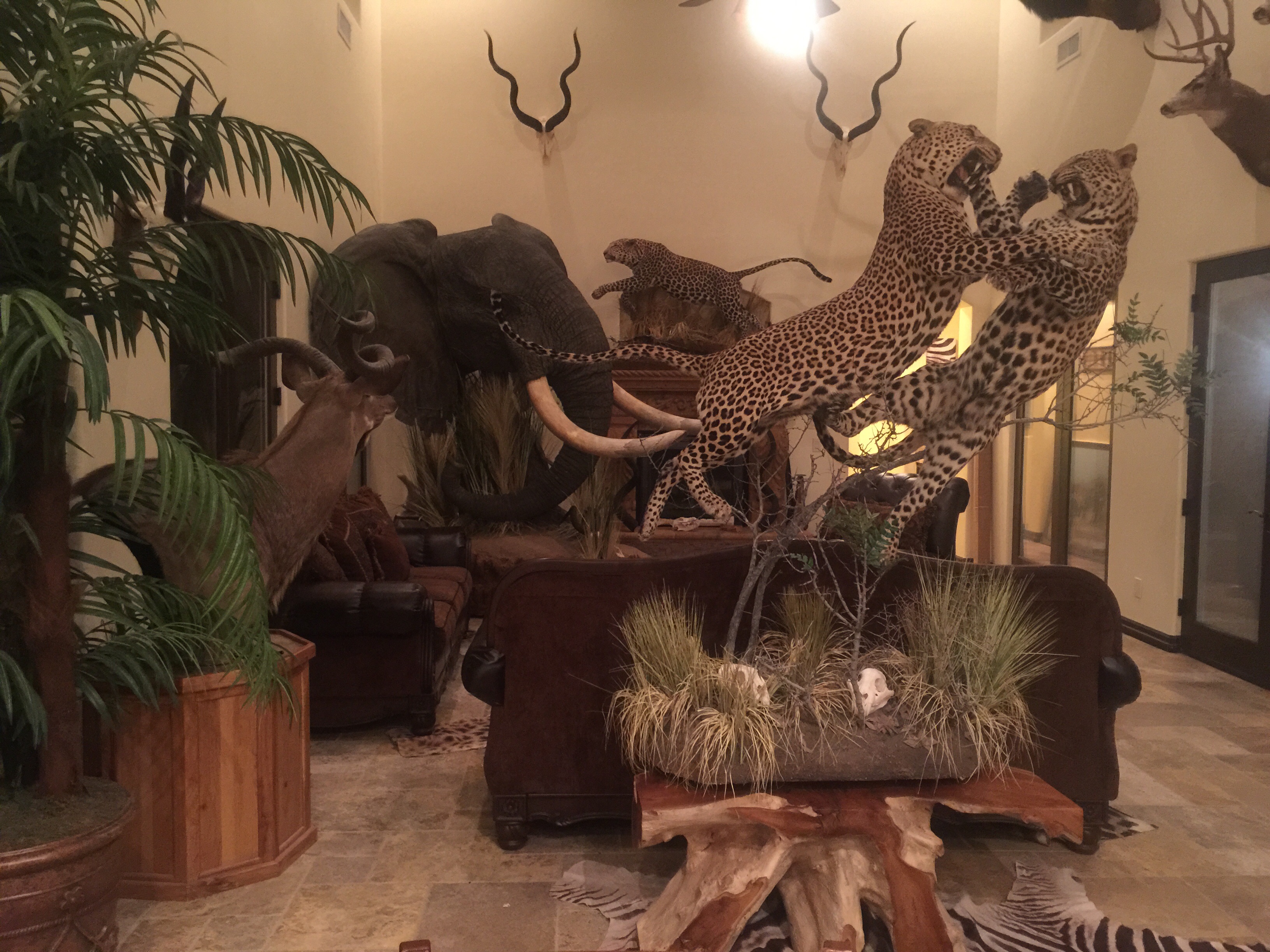 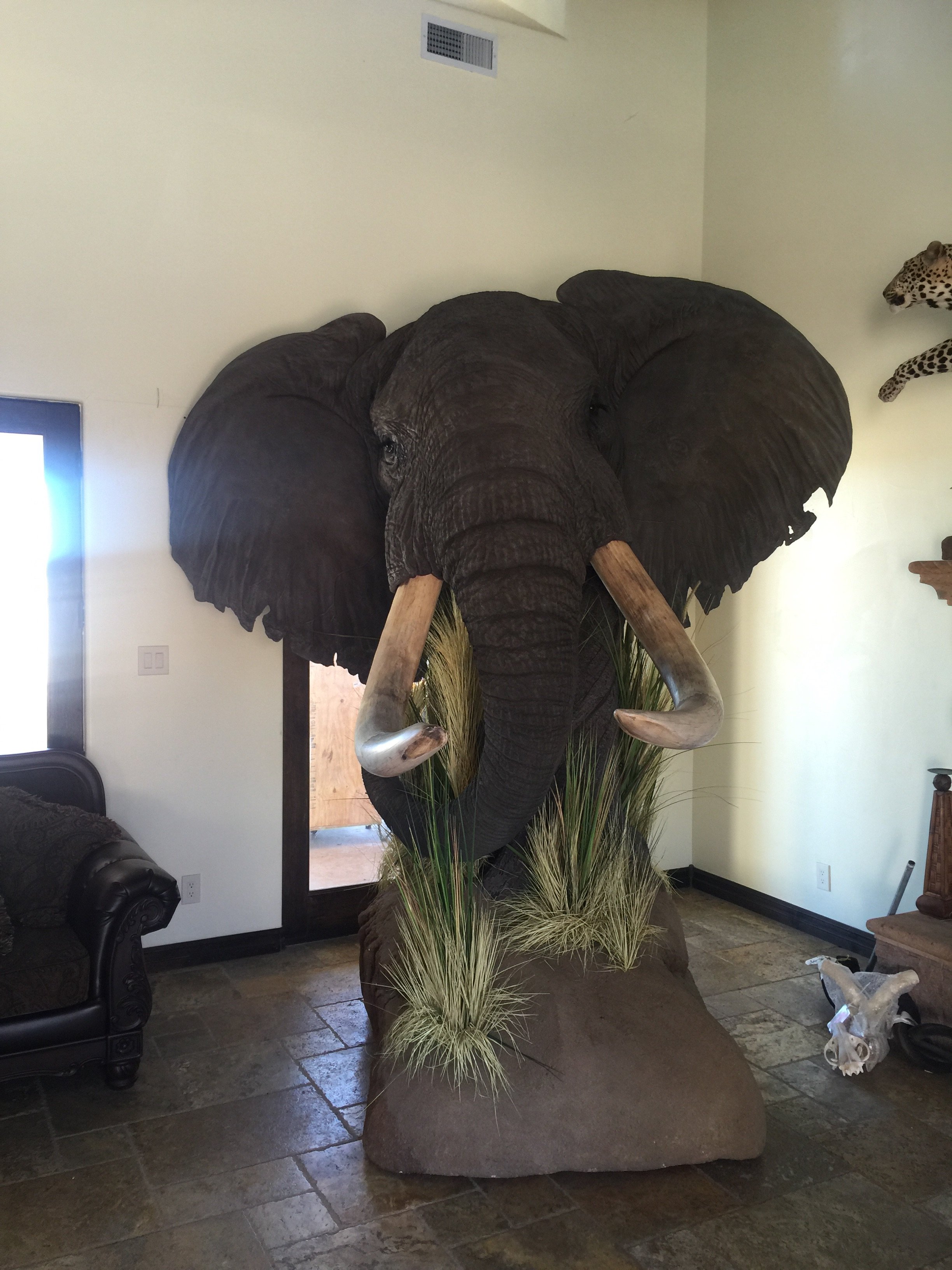 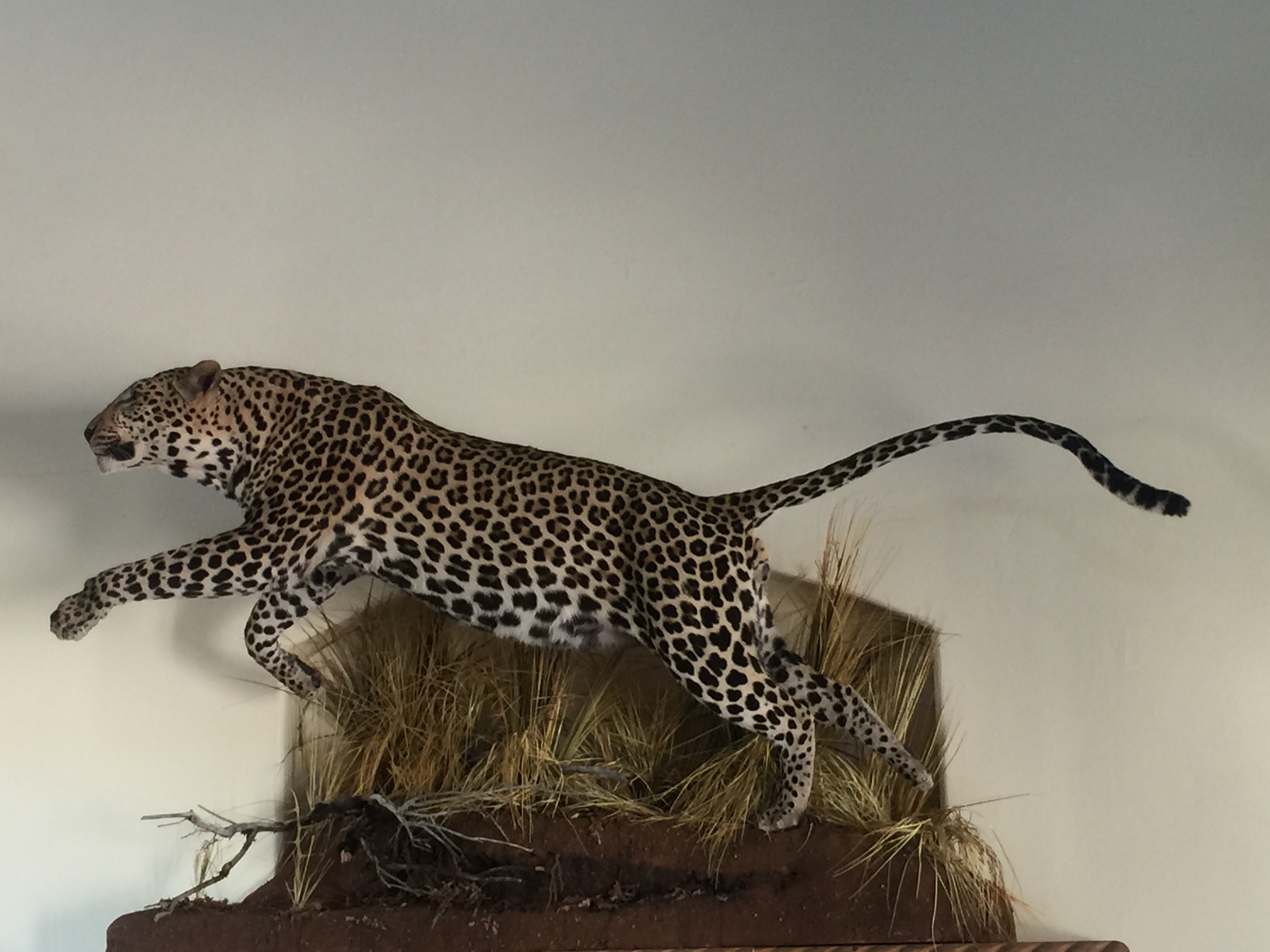 What is Worked Ivory and When is it Importable?

Only Option or Elephantine Overkill?