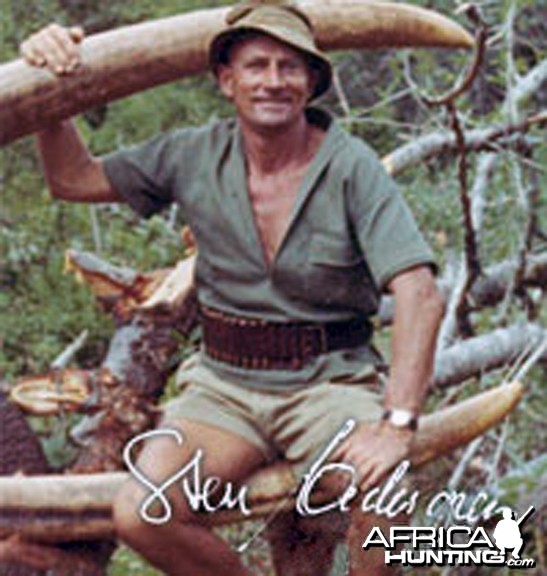 There have been many claims of remarkable adventures in the safari business, but one would be hard pressed to find a life story that can top that of Sten Cedergren’s. Born in Sweden, in 1919 he set out to become a cowboy at an early age-first stop, Paraguay. Next he joined the United States Army to fight in Korea-even though he was a Swedish citizen! After further roaming, he landed in Kenya at a time when most Europeans still carried a handgun in the streets of Nairobi. He eventually joined White Hunters Ltd., in addition to doing elephant control work. During his career Sten was clobbered several times by members of the Big Five, but he never considered it necessary to be treated at a hospital-a tidbit that gives insight into the character of this remarkable man. Being a handsome devil, he had many adventures with female clients, some of which you may not want your children to read! In 1977 when Kenya closed hunting, he did not part for quieter venues, but, rather, he joined the bushwar in Rhodesia where he stalked (and killed) terrorists in Mozambique when he was a young 58. After Rhodesian independence, he took up hunting again.

Sten Cedergren is among the few Swedes in the safari business and got there the long way around. Born on one of his country’s largest private estates, where his father was senior forester, he owned a .22 rifle at age eight, and a 12-gauge shotgun at 12. After a pleasant military service as an officer in ever-neutral Sweden, he put aside the idea of becoming a game warden in Sweden as “you had to have a private income because the position was unpaid,” and found himself instead in Paraguay, ready to become a gaucho the very day in 1947 the government was overthrown by the army. The chapter, My Early Years, is good reading, describing the ranch life of vaqueros, then his sailoring, then his soldiering for the U.S. Army. He embarked for Kenya in 1953 with a U.S. passport and a .45 pistol.

His apprenticeship and entry into East Africa’s restricted safari world - when the three companies (Ker & Downey, Safariland, and White Hunters) were all run out of Nairobi by retired British army colonels - was due to good luck and chance encounters. He met Major Andy Anderson at the Muthaiga Club and nicely retells several of his tales that also include Jim Sutherland. He also met and went to work as a game-control officer for the game catcher John Taylor. Finally, PH Chris Satertwaith who operated north of Nakuru added many insights-good and bad-into his life.

Eric Rundgren himself advised the young Cedergren to go to Shaw & Hunter’s gun shop and purchase (for 70 Kenyan pounds) a retired PH’s .500 Jeffery No. 2 with boxlock ejector, built in 1906 of Krupp steel, with interchangeable .470 calibre 24-inch barrels made in Ferlach. He eventually added a .500 Westley Richards Nitro Express boxlock, scoped pre-64 Winchester .458 Magnum with 26-inch barrels, a .375 H&H Magnum, a Winchester .300 H&H, and a Brno 12-gauge shotgun to his gun rack.

Cedergren writes with flair and precision, comparing the "great swishing noises made by elephant trunks sweeping in the wheat" to a harvester’s scythe, or again "outstretched like a vacuum cleaner" while it followed his scent. He recalls his friend J.A. Hunter’s advice on hunting elephant: Get as close as you can - and then get 10 yards closer!

His hunting stories from the years at White Hunters are interesting and often hilarious. "In those far-off days there were no controlled hunting areas. Game was plentiful everywhere, and full bags, which included elephant, rhino, buffalo, lion and leopard, could be obtained just 50 miles from Nairobi." Between safaris, Cedergren based himself in Malindi, a sleepy, safe haven on the coast 70 miles north of Mombasa where the athletic and inexhaustible PH dedicated himself to spearfishing and stewardesses. "Freedom of movement in the old days was unbelievable, and good relationships between professional hunters were the order of the day."

Again, Cedergren tells good stories - about Jack Blacklaws, René Babault, Bunny Ray, Tony Henley, Eric Rundgren, Rolf Trappe and Robert Foster, and others who should have gotten more of their adventures down on paper. (I wish he’d told more tales on the goings-on during the 1964 filming of Born Free, which, with a crew of 160, he could not have avoided.) 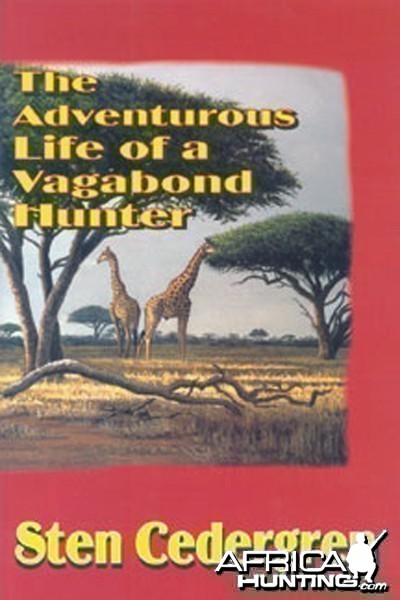 The Adventurous Life of a Vagabond Hunter by Sten Cedergren

He could relate all too well to the story of the odious, malodorous hunting client, Heinz, or to the Italian prince who probably wounded his animals on purpose "in order to experience a more exciting finish of the hunt." All this is interwoven with interesting details like: 'All the buffalo along the Galana River had a reputation for bad temper because the Wakambas and Liangulus used to shoot them with bows and arrows, often wounding them in the process. Sten guided nobility and Texas oilmen, and more than his fair share of randy gals, although eventually, the man who agreed that "a bachelor is a man who hasn’t made the same mistake once" married the lovely Lola and fathered two children, one named Mara, after his favorite lioness that played Elsa in Born Free.

Cedergren had his share of close calls – including a huge knock by a black rhino with 28-inch horns that, he thought to himself before passing out, “would certainly make the Rowland Ward record book.” Snake Encounters is very detailed and interesting, and deserves a close read. From an information point of view, this chapter alone is worth the price of the book. One cannot spend a lifetime in Africa without ‘coming close’ a few too many times; Cedergren was also mauled by a leopard, and had his ribs broken by a buffalo.

When Kenya closed, Cedergren did like nearly all the other PHs, and hunted – accordingly to their upheavals - in Sudan, Botswana, Zambia, Tanzania and Zimbabwe. By 1981, the Zimbabwe hunting industry was again in full swing, and Cedergren had good years in the Matetsi and the Dande area of the Zambezi Valley. Eventually the changes in the industry and the hunting methods dismayed him, and the book rolls to a close.

After living the golden era of safari hunting, which for him was 1950 to 1965, Cedergren stopped professional hunting in 1997 at 78. “I must conclude by saying that if it had not been for the heavy English-built double rifles that I used throughout my hunting career, I would not have been around to write about my experiences in the African bush.”

Another great hunter who has seen and experienced all of the African wilderness...
Last edited by a moderator: Dec 8, 2016
T

Great write up... I just bought his book!
You must log in or register to reply here.