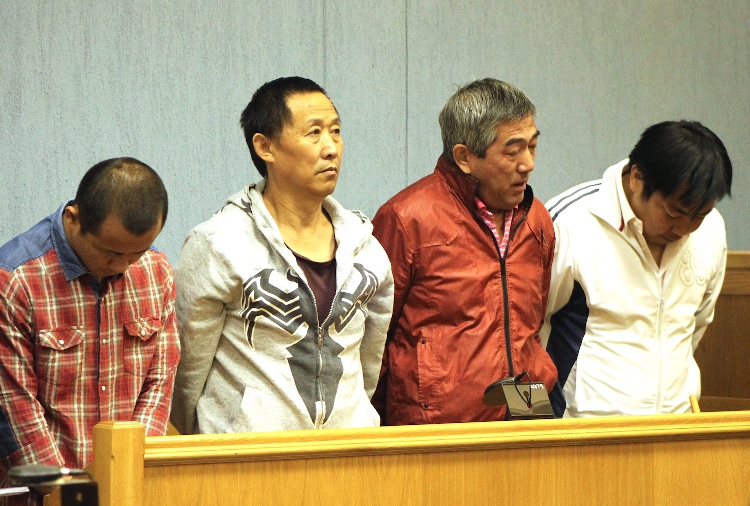 IN PRISON ... A trial over a failed bid to smuggle 14 rhino horns out of Namibia ended in 14-year jail terms for Chinese nationals Li Xiaoliang, Li Zhibing, Pu Xuexin, and Wang Hui (from left to right).

THE High Court here on Tuesday allowed the State to appeal the prison sentences imposed in the case of four Chinese nationals convicted of attempting to smuggle rhino horns out of Namibia in 2014.

The four Chinese nationals were arrested between March and May 2014, and were each sentenced to 14 years' imprisonment in the Windhoek Regional Court on 30 September 2016.

Not happy with the sentences, senior state advocate Simba Nduna then approached the High Court with an urgent application for the prosecution to be allowed leave to appeal against the sentences, saying the sentences imposed in the regional court were too lenient when compared to punishment handed down in similar criminal cases.

The State was allowed leave to appeal in a ruling delivered by High Court judge Christie Liebenberg on Tuesday morning.

Li Zhibing (53), Li Xiaoliang (30) and the 49-year-old Pu Xuexin were arrested at Hosea Kutako International Airport on 24 March 2014 with 14 rhino horns worth more than N$2,3 million and a leopard skin valued at N$50 000 stashed in their luggage.

The fourth was Wang Hui (40), believed to be the kingpin in the rhino horn smuggling operation in Namibia.

He was arrested in May 2014 at the Windhoek Country Club Resort, where the other three convicts stayed before their failed attempt to leave Namibia on 24 March 2014.

They were arrested by members of the Namibian Police's Protected Wildlife Resources Unit.

Orben Sibeya defended the four Chinese nationals, while Nduna appeared for the prosecution. The four men are serving their prison sentences at the Windhoek Central Correctional Facility.

Wonder what length of sentence they are hoping to get? 14 years is a long time if they serve all 14 years. But if it's like OJ and they get out in 9 I can understand why the state wants a longer term!

Good luck to the prosecutor.
The price of Rhino horn just went up.
You must log in or register to reply here.

Local Chinese Community Pledge N$30 000 to Save the Rhino

A Step in the Right Direction on the Poaching Front