SOUTH AFRICA: You Stalk Some, You Shoot Some

I know this type of hunting is a bit of a sensitive topic so if you would like to know more about the outfitter feel free to contact me directly. I would appreciate no negative commentary, thanks!

Day 1
It was about 10 hours’ drive to the hunting area in the Kalahari, northwest province, south Africa. Nearest town being Vorstershoop. this was my first ever hunting trip away from the farm I live on. We arrived at about midday after leaving very early that morning and had time to unpack our stuff get settled and assemble the guns. We had lunch; delicious chicken wrapped in bacon with fantastic bread rolls. We had a shot on the range, we took a 300-win mag and a 9.3x62 both Blaser R8’s and then we were out for the afternoon, we drove around and saw a lot of animals. We stalked some gemsbok (oryx) for about 2 hours, but we just never got a clear shot on a big bull.

Day 2
Up at 5am, coffee and tea and a rusk at 5-30am and out by 6am. The previous night we decided that I would hunt first at 6:50 we spotted the first set of lioness spoor. After a few short walks checking spoor, we found tracks that had crossed over the bakkie’s tracks so we decided to get serious on these tracks, after about 45 mins, we decided to get back on the bakkie and drive the blocks again to see if the lioness had moved out of the block. At about 10:30 we had spotted the lioness from the bakkie lying far from the road under a tree, we drove past, got off and started the stalk. The PH got me to about 30m and just like that I had shot a lioness on my very first hunting trip away from our farm! What an experience, Thanks Dad! After lunch we were out, and it was my dad’s turn. 15:43 was the beginning of a hairy situation, we had spotted a kudu bull that the lion had freshly killed, we spotted the lion and then just as we got off to start stalking, we spotted another kudu bull that the lion had killed very recently. The lion had seen us and was off, he ran circles around us… literally. We walked right past him and then we walked right into this big guy. Note, this all took over an hour of seriously fast walking!!! Just as my dad was getting onto the sticks and this big guy gave us a nice roar, the lion was lying, facing straight toward us, my dad made 3 great shots and the lion was down. Well done dad!

On our way back to the lodge we spotted another lioness, at 17:10 we started stalking her. She kept going in circles and going back to where we first saw her. We eventually found her up a tree at 18:33. 3 shots and she’s finally down. Well done dad! We walked ourselves silly today, I had 4 blisters. The team that hosted us on this hunt really know what they are doing, and you can see the passion for lion hunting oozing out of them. All in all, a great day, one for the books. A lot of good luck too, being in right place at right time!!! But all good shots.


Day 3
About 40 mins into the hunt, a short stalk this morning and my dad has shot his lechwe, he shot across a bit of a valley, the lechwe didn’t even know anyone was there. Awesome looking animal! We made a few long stalks on blesbok, they saw us every time and ran away, unfortunately. Went back for lunch, had a nap, and out again at 3pm-ish. On our way to the bow hide we saw a monstrous blesbok ram so obviously, we got off made a good short stalk and I got a huge blesbok, around 18 inches, in the bag! Sat in a hide with the bow for my dad the sun sets so late in the Kalahari, so we stayed in the hide until just before 19:00 but no gemsbok came to the water only some springbuck, blesbok, kudu, and wildebeest.


Day 4
Early start again, up at 5, coffee etc out by 6am, we drove around looking for red hartebeest for me, saw a few herds but no bull that was mature enough to shoot. We stalked a bachelor herd of 3 nice bulls for 3 hours, but they just wouldn’t stand still and of course, on the day we decide to follow some rhb everything else decides to show up as well, roan, blesbok, zebra you name it, it was there. Messing up our stalks and making the red hartebeest wary and nervous. There was even an ostrich female following us. Eventually, the roan saw us and took all the other game with it. We went back for lunch, it started raining around 2-30pm for a few minutes, we went out again just as the rain slowed down at 3ish to sit in a hide for my dad with the bow but no luck. It rained while we were in the hide, not a single animal was moving around.


Day5
Early start as usual, “no rest for the wicked” I guess. Within the first 30mins of the day, we spot a herd of gemsbok. We get off and start stalking them, we walked up a little hill and the gemsbok were on the other side in a little valley, one good shot, the bull ran about 150m, and the monstrous bull is down. My dad’s been wanting a gemsbok for the longest time, he was beyond happy! Later, we saw that same herd again and tried stalking them for a gemsbok for me, 3hours later and they just haven’t stop walking, we spotted them many times, but they were very nervous and wouldn’t present a shot, so we decided to pack it in and go for lunch. Out at 2:30 again on the hunt for a gemsbok or rhb for me. Walked for 40 mins after a lone gemsbok bull but he saw us so no luck once again. But that’s how hunting is, nothing is guaranteed. We went and sat in a bow hide for my dad for a while before trying to stalk a gemsie again. Oryx can be a bit less wary when its low-light so they gave us a couple chances, but I really wanted to shoot a bull and he just wouldn’t give me an open shot, but the overall experience of the trip was unforgettable, and I am so grateful that my dad and I could do this together. Hunter for life!!!! 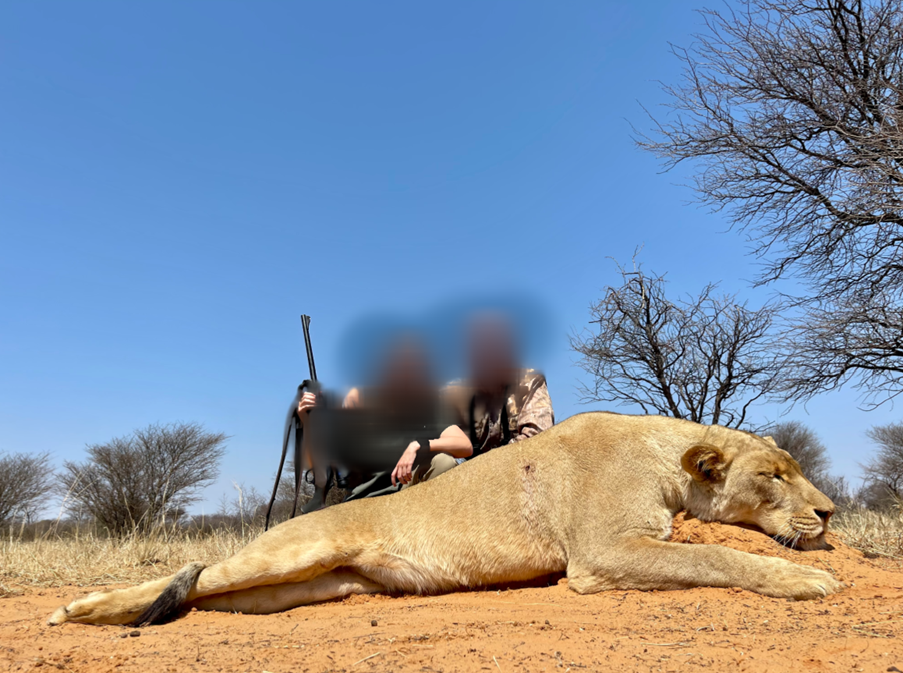 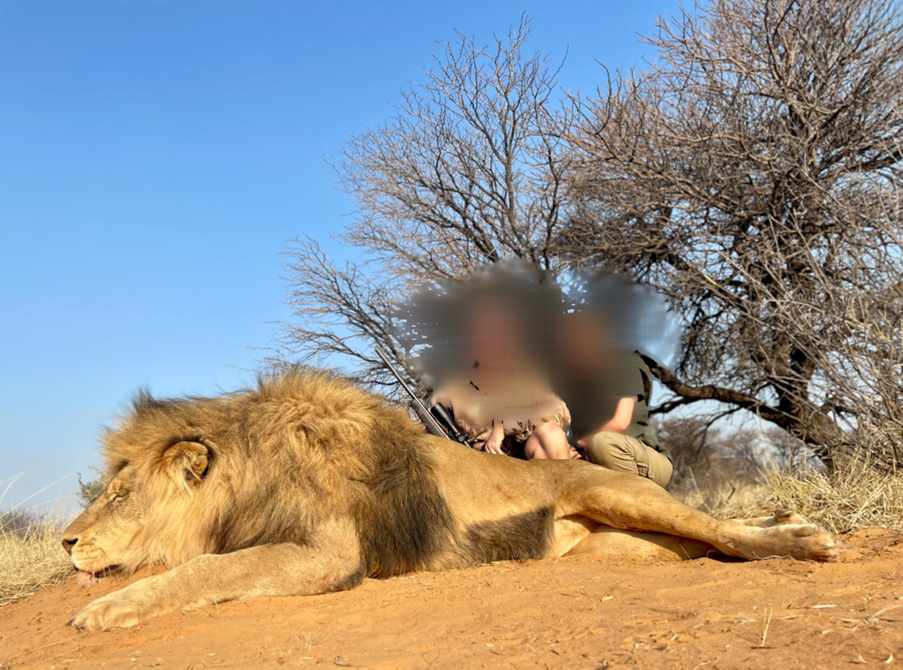 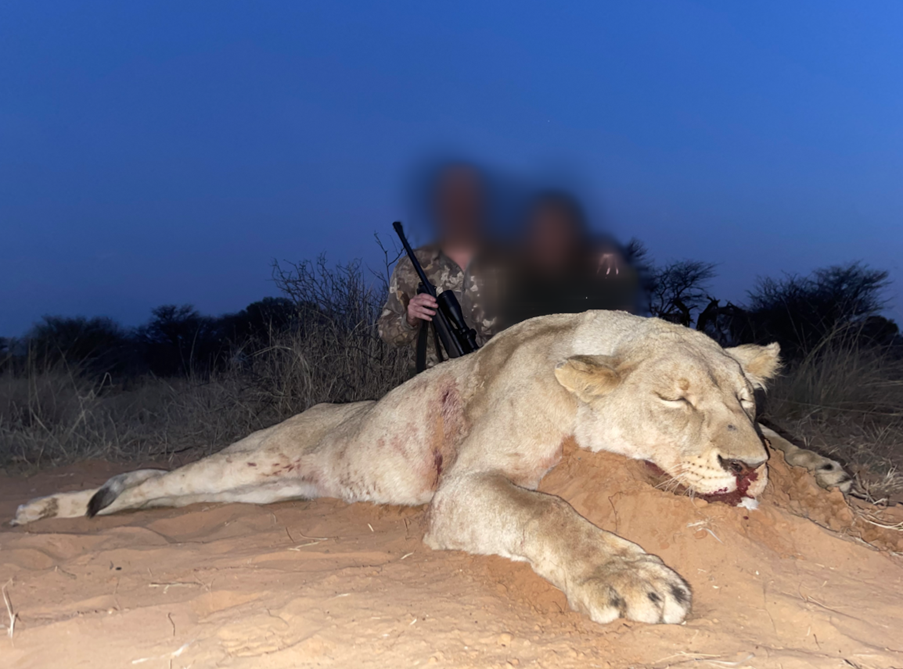 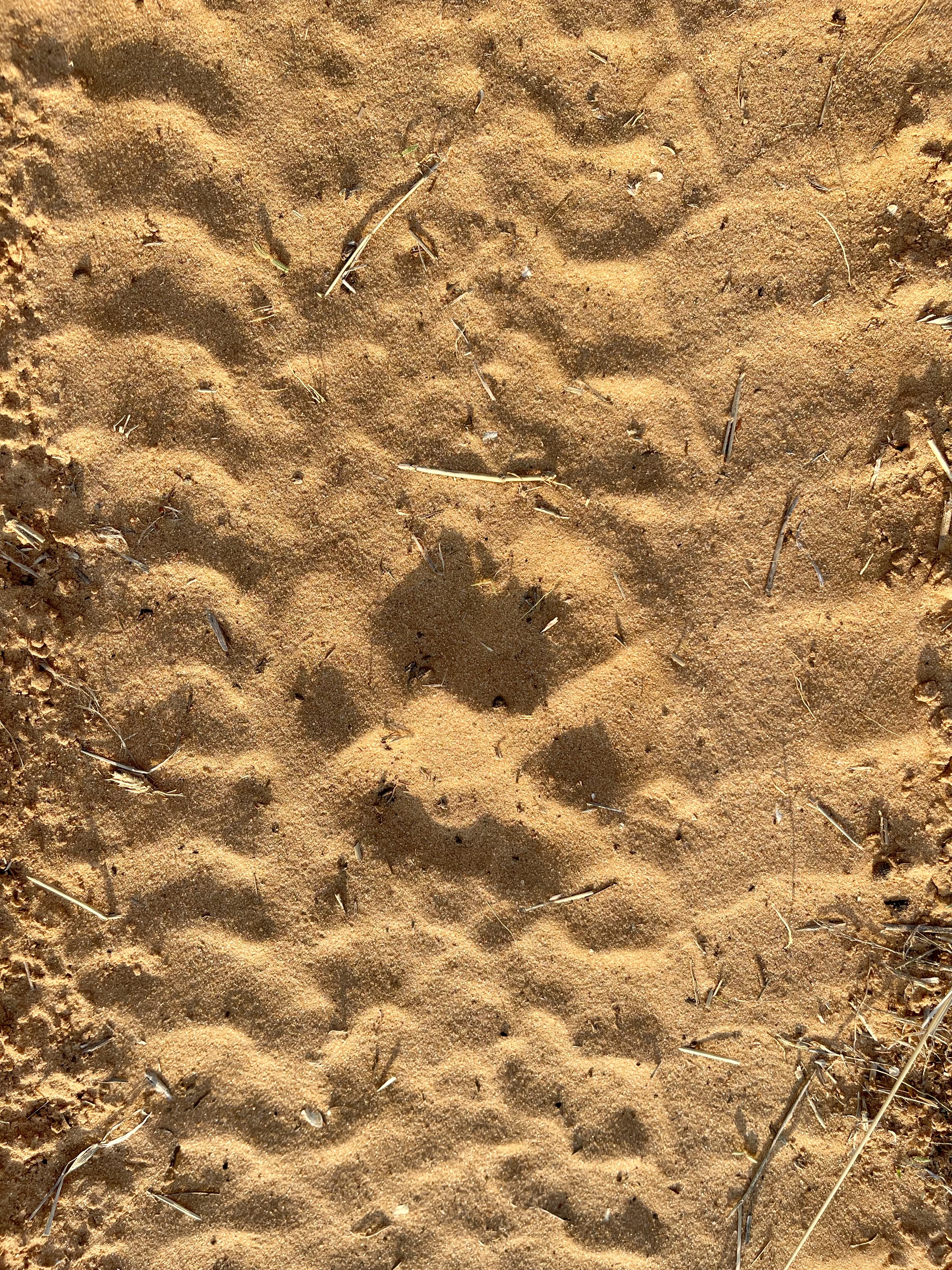 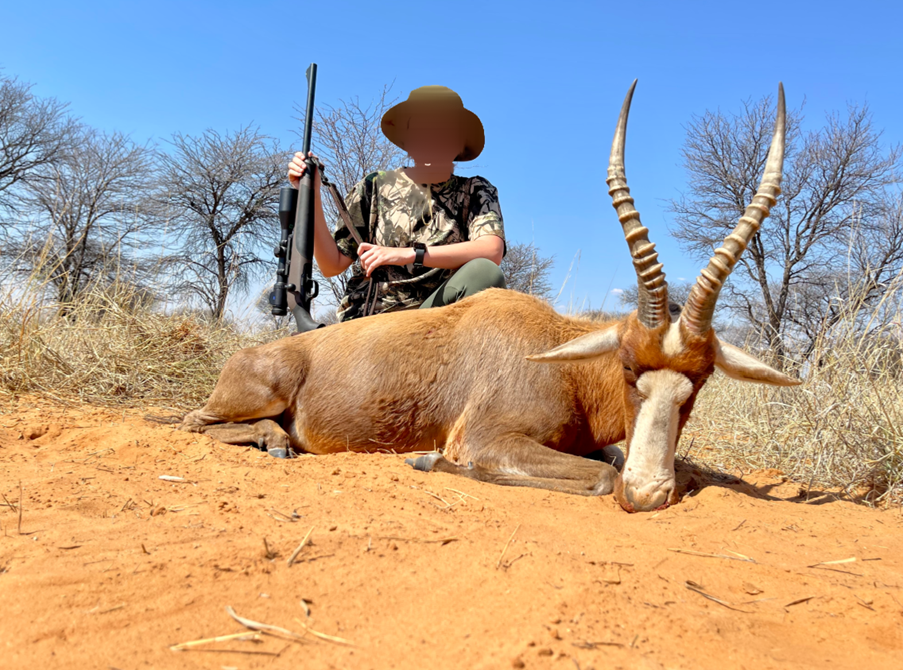 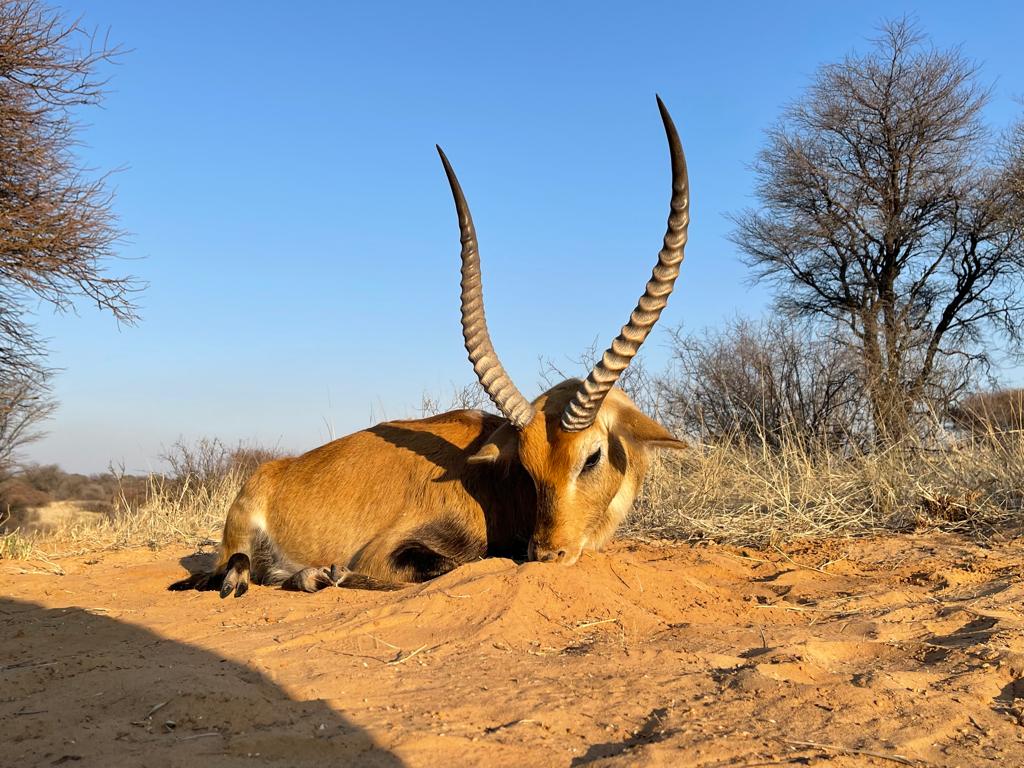 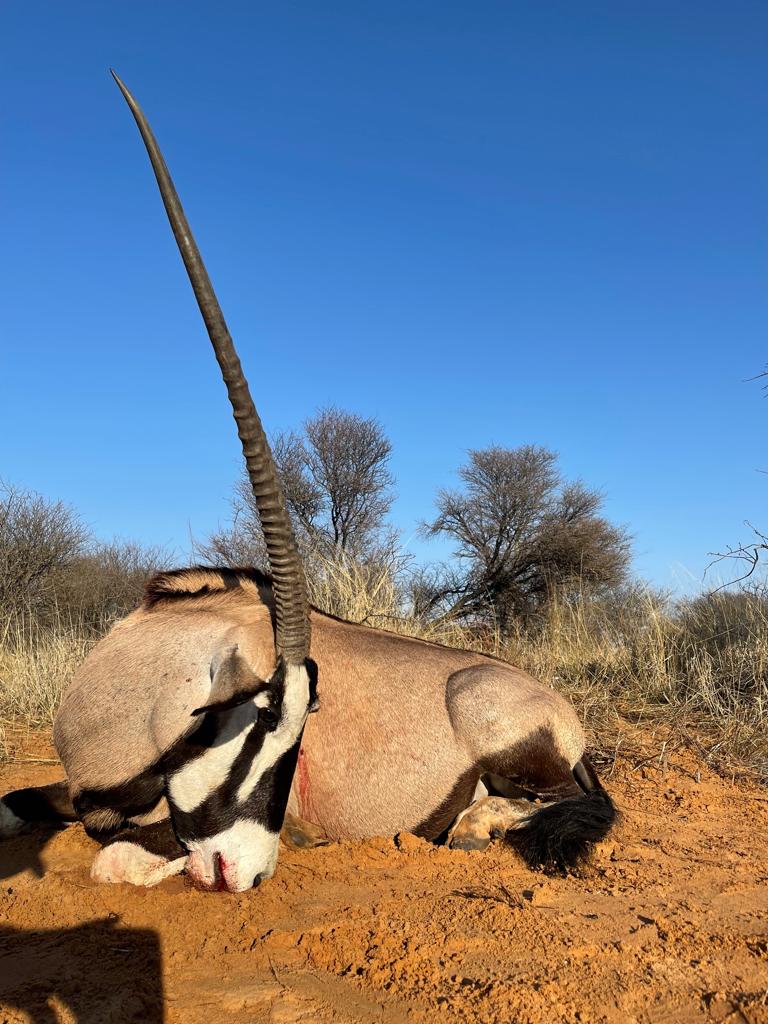 Congratulations to you both.

Congrats to you and your dad! Can you give some more info on who you booked this lion+pg hunt with?
Cheers!

Hunting with family is about as "good" as it gets. I hope you and your dad have many future hunts together.

Sounds like you made lifelong memories with your father, congratulations on a great trip all around!
"A man and a gun and a star and a beast are still ponderable in a world of imponderables." Robert C Ruark

Sounds like you had a great hunt. Congrats.
Bruce

Sounds like an excellent family trip!!!! You are lucky to have the opportunity to hunt with your father. Congratulations to both of you!!! Beautiful cats!!!! And everything else lol

Enjoyed the write up, being able to travel and hunt with family is a great experience, as they say "priceless" these will be life long memories!!!
D

Congrats to you both!! Very nice trophies!! Looks like y'all had a wonderful time.

Congrats - Sounds (and looks) like a terrific hunt!
You must log in or register to reply here.