Congratulations to you and your son! Rhino are pretty special!

Congrats on a great hunt and great photos! Thanks for sharing!


JES Adventures said:
A sad day to say the least, its not nice to lose a trophy but losing a dog was one of the worst feelings I have ever had on Safari.
Click to expand...

This though, I’m certain, was a heart breaker for all.
Africa on my mind.

Justbryan said:
JES Adventures,
Bossie will keep you entertained. Lots of fun and a great hunt. Congratulations! Rhino is on my short list with Bossie and Limpopo Big Game Safaris. Only problem with a Rhino is where to park a minivan sized Rhino Bull in my house.
Click to expand...

Day 7
We slept on today as a result is the previous evening celebration. Everyone finally showed up for breakfast by 9 and we were out by 9:30. I am in search of a Black Impala today as I have never hunted one.

The weather was great and warmed up nicely. By 10:30 we located some Impala with a few Black Rams in the group.
The Bush is extremely thick and we had some difficulty getting a clear shot. Noontime came and I figured we would pack it in and head for lunch when we came up on the good Black Impala Ram. I got on him and followed him as he wove through the thick bush and I could see he was close to a small opening.

Just as he entered I could see his shoulder through some grass and I touched off the shot. I saw him react to the shot and when we got to the location where he was we found good sign of the hit. The ram ran about sixty yards and we found him dead.

A gorgeous trophy which I immediately could see how much smaller the body is than a normal Impala.

Back to camp for lunch and a siesta as we will finish off the last day with a quick night hunt. 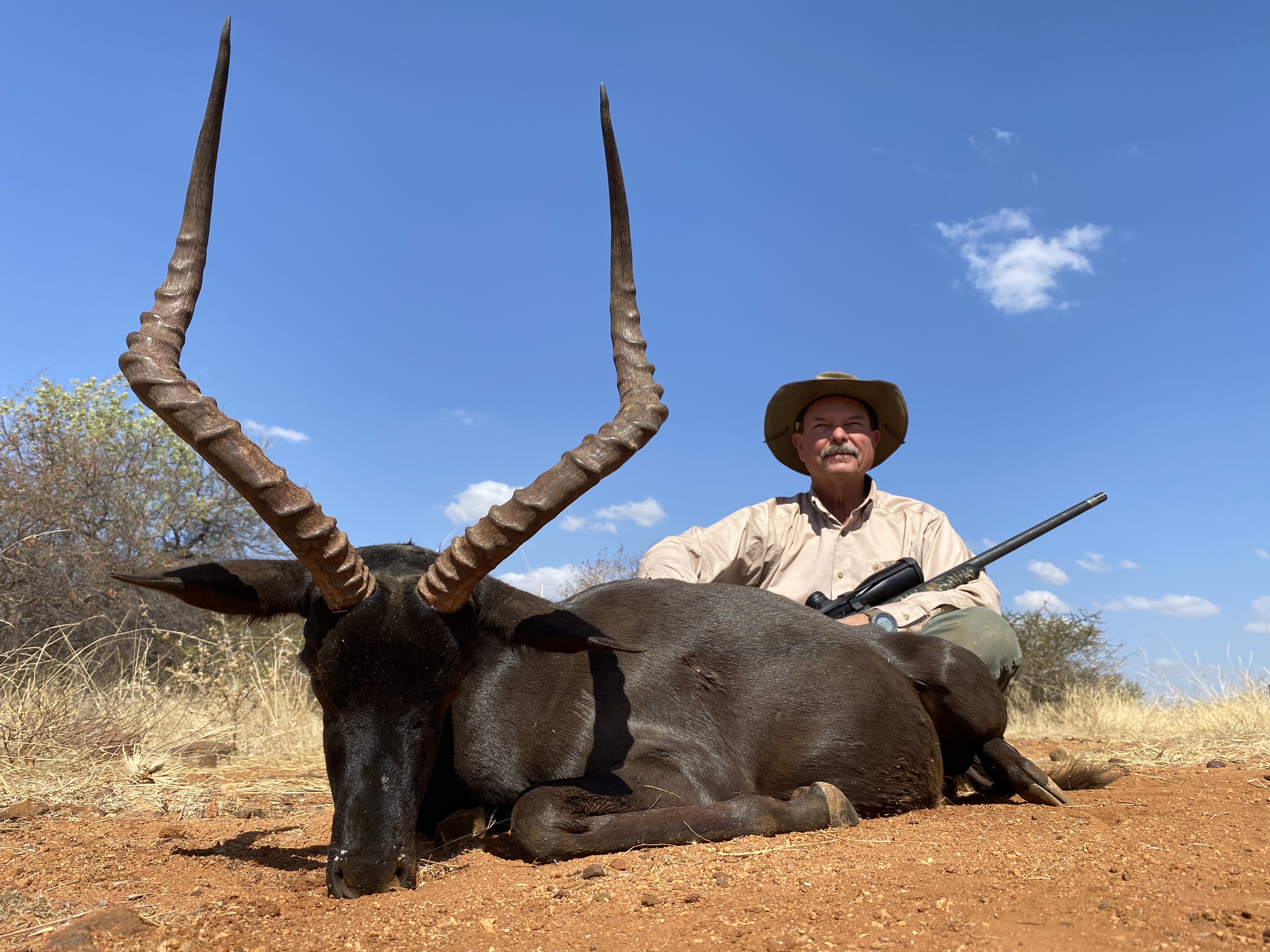 We got our Covid tests back and printed off this afternoon then spent some time organizing our luggage as we leave camp at 6:30 in the morning to catch our flight to Nelspruit where we will take SA Airlink to Livingstone.

Bossie told us to be ready at 6 as we have a 45 minute drive to a macadamia plantation he says has plenty of Genet as well as other interesting critters.
The winds started howling today and the temperatures dropped. We got to the farm about 7 and met the owner and his son who would take us out. A nice young man about 18 that loves hunting. Being close in age to my boys they enjoyed visiting on the back of the truck as we searched for Genet.

It was bitter cold, definitely in the low 30’s with wind chill. We saw lots of Bushbuck in the orchard as well as Duiker. Bossie caught eyes in the light and put up his binoculars. He whispered “Whitetailed Mongoose”. He changed to a red light and started squeaking with his lips like a fox call. It worked, the mongoose trotted straight for us and I took him with the 12 gauge. A really special little animal I am pleased to have collected.

After pictures we carried on and the night got colder. I told Bossie “we should wrap this up as it’s after 9”. He said “let’s quickly check one more place”.

So we drove around to a new area recently planted with small macadamia trees. Bossie mentioned we could run on to Bushpig and Parker and I have both shot them before Grant would be up.

As we crested a small rise overlooking some open bottomland Rueben said “vark, vark” then I saw the group of Bushpig a couple hundred yards below us. Bossie tells the driver to speed up as the pigs are on the move. I handed Grant the 338 Win Mag and told him to hang on. We got to a fence line the pigs had to go under and it slowed them down enough for us to get in position.

Rueben and Bossie both yelling “shoot, shoot, the one in the front”. As the pigs got into the next pasture Grant was on them and let fly. The lead pig dropped instantly and Rueben said “shoot again”. The pigs kicked it into high gear and he didn’t connect with any more.

When we got up to the pig everyone was impressed with the size. Grant made a helluva running shot and had a big old Bushpig Boar to show for it. 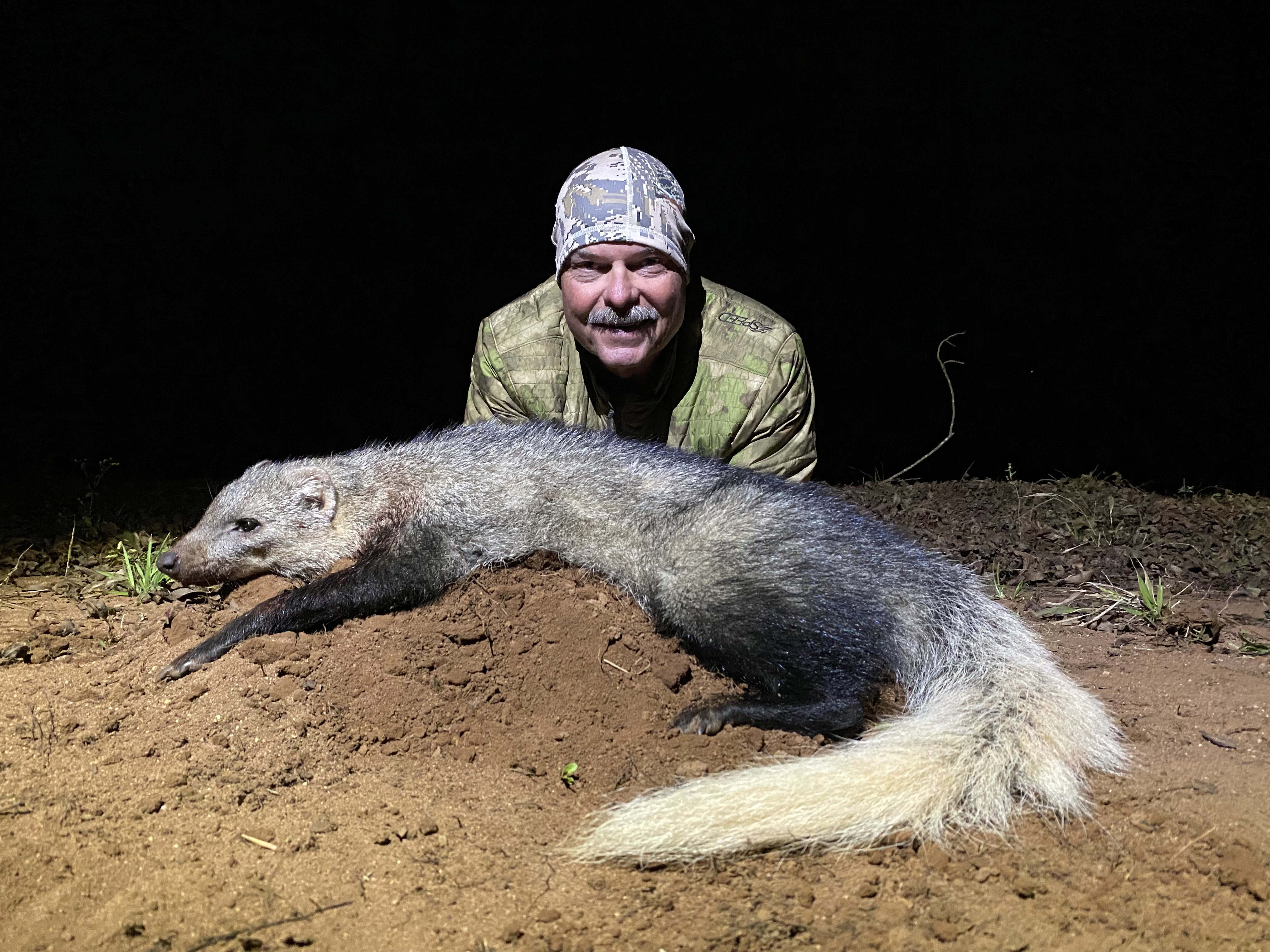 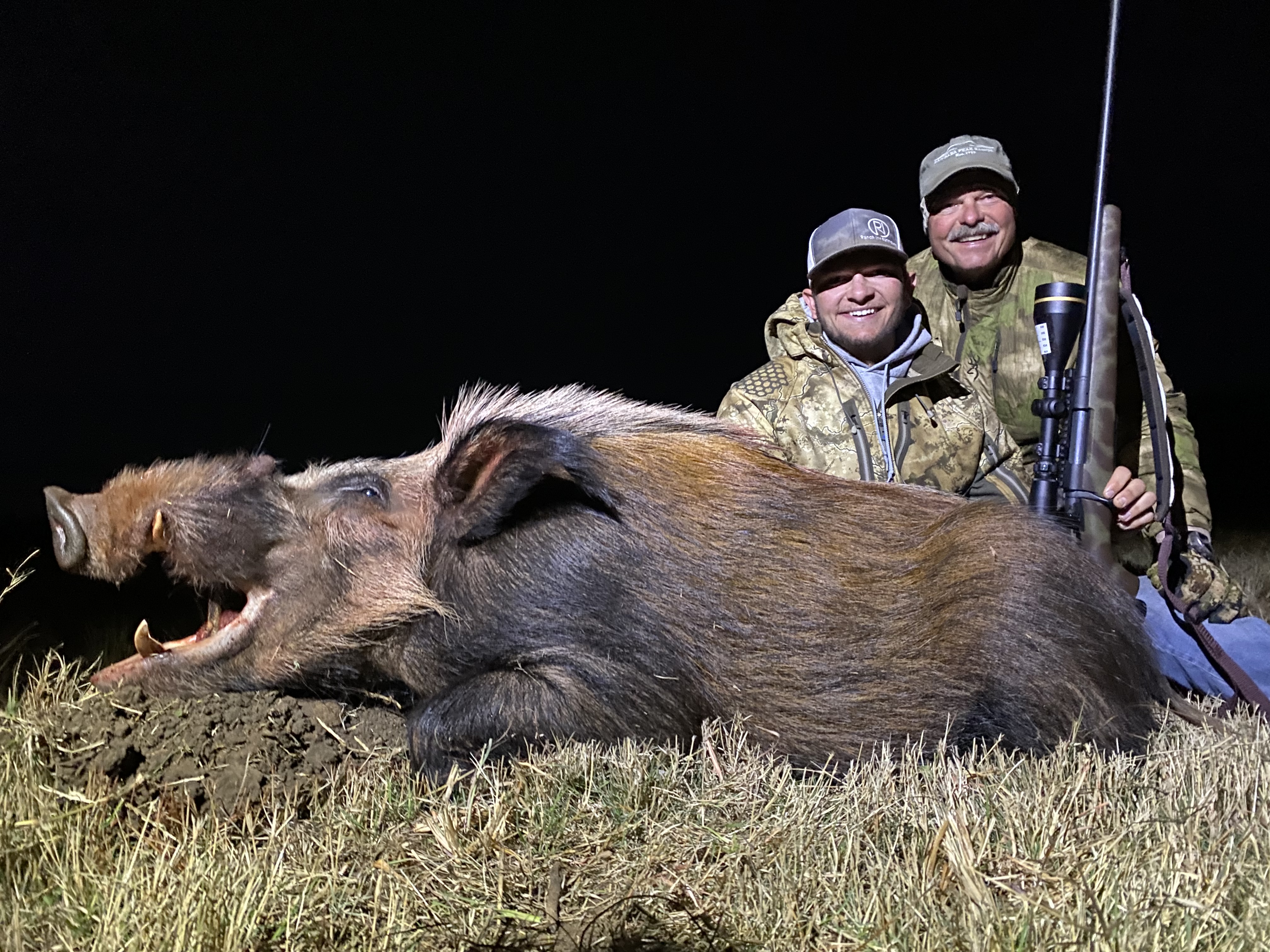 Day 7 (final)
It’s now approaching 10 and I am miserable on the back. I told Bossie let’s call it a night and he said “ok, but we just need to make one more run through the place on the way out”.

I said fine but I’m riding inside. After about a half hour of cold and howling wind he stopped the vehicle and asked me if I had 15 more minutes in me and I said yes. I climbed on the back and instantly kicked myself in the ass for not bringing long johns!

We saw a couple more Water Mongoose but no Genet. I recognized the surroundings and knew were not far from the gate so figured I would once more get skunked on Genet.

Then, just as quick as you can snap your fingers Bossie spots a Genet and switches lights and starts squeaking. Just like before, he comes heading straight for us. When he gets in range Bossie says “take him” and the shot from the 12 was true and I had my Genet.

It was a great night and I am happy to have done it but wish it was earlier on in the Safari as we got back to camp about midnight and had a 5:30 wake up call.

Bossie delivered on everything he said he would and we all had a great stay at Leadwood Ranch. Glen and Charmaine know how to run a camp and their staff is highly experienced and well trained. We never wanted for anything as every attention to detail was looked after.

I’m sure I will hunt with Bossie again someday and recommend him to anyone that wants to hunt the Limpopo.

That being said I also highly recommend African Wild Safaris as they have a beautiful hunting property with a high quality camp.

Many thanks to Bossie, Glen and Charmaine along with their team of cooks, waiter, trackers, skinners and domestic staff. Their combined efforts made for a very memorable Safari. 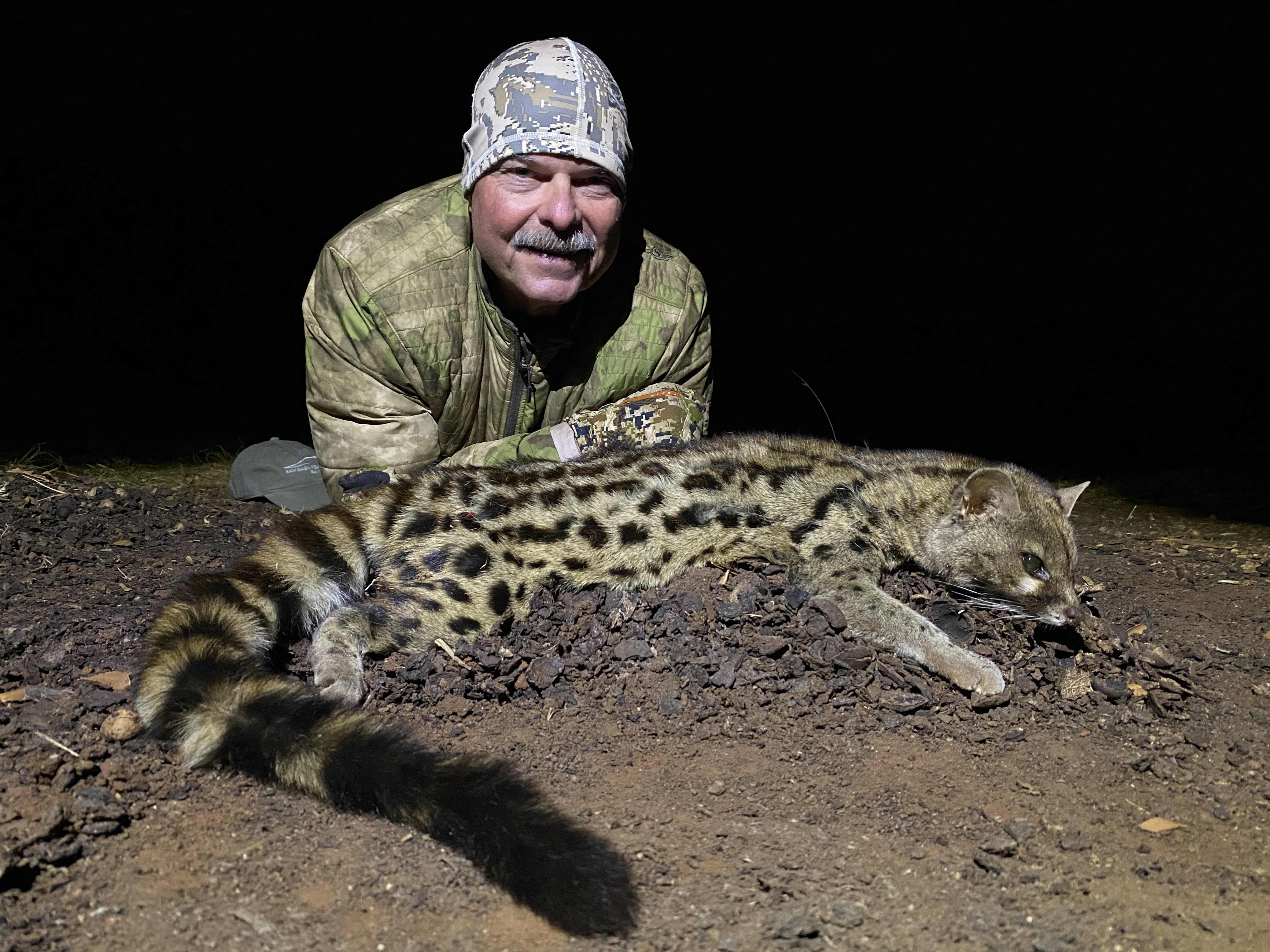 Well done glad you decided to do the last 15 minutes.
Keep the wind in your face and enjoy your hunt!

Congrats on all the night critters also! Thanks for sharing the hunt with us!
John 3:16

Oh what a fine looking genet! I was never able to connect with one. Envious!
Africa on my mind.

cpr0312 said:
Congrats on all the night critters also! Thanks for sharing the hunt with us!
Click to expand...

Thanks @cpr0312
I felt very blessed as I have been trying to collect a Genet for years. It was the last of the small cats on my list.

Congratulations on all the fantastic critters you all successfully hunted. Some real beautiful trophies.

I'll be back for them and more as time and politics permit!

ActionBob said:
Congratulations on all the fantastic critters you all successfully hunted. Some real beautiful trophies.

I'll be back for them and more as time and politics permit!
Click to expand...

Thanks @ActionBob. How lucky that is to have both varieties of Genet. Hunting these small critters is a challenge and I expect if you go back with Bossie you’ll get them

Wooww.. great report. Congrats on your and your son's trophies

Thank you @DieJager, it makes me so happy to see my children carrying on the tradition of hunting and conservation

Wow, what a fantastic trip and hunt. Congrats to all. Well done!
You must log in or register to reply here.