This is my 8th trip to Africa, my wife's first.

I Hunt booked with Ricus DeVillers from White Lion Safari's this past May.
We booked the trip and set it up on Nov 2011.

I found White Lion Safari and Ricus Devillers thru a hunt offered over the internet. I could not be more pleased with the fast replies to emails and the personal contact during the set up of the safari. The professionalism of Ricus and his crew is unsurpassed from the logistics of the travel to and from the ranches with 4 private charters to the camps that were perfect, My wife's first time to Africa so this was important. I was on a schedule to go to Zim in less than a week for another hunt so this had to go seamless and it did.... Ricus had everything set up from here on....

Arrived J'berg and was met by Godfrey from Africa Sky Guesthouse, he was so helpful. I did my own permits but he knew some of the people in the police office so that took less then 5 minutes and out the door. A night at Africa Sky, perfect. Can't say enough about them, I would never choose any other place to overnight.

Up at 5:00 am off the private airport and a 2 hours flight west to the Kalahari. Ricus and his pilot Yako, I believe his name was, were incredible, funny and personable and we just clicked. We arrived and greeted by Ricus's crew. They had been in the bush form 3 days dragging roads and getting a clue where the lion was holding up in the 10,000 acres.


They had an area where spore had been seen the day before. We got to camp and took it easy for the afternoon and went out to drag some more and look for tracks. Some were spotted but older sign and we would pick up more in the morning. I'm not in the greatest shape, I need to be. The Trackers left on foot the next day at sun-up while we grabbed some breakfast and then we followed with the cruiser and 3 Ph's . We picked up the trackers in the bush after an hour or so and picked up where they left off following the roads to see if we could place him into a certain section of the area. After noon we picked up a track that had been earlier that morning. We covered some more ground in the cruiser to see if he had crossed the road a few Km north or west. We saw that he hadn't left that section and went back to the original track to start a stalk.

A few miles and hours late into the day the tracker starting getting excited and looking under the thick cover and stopping and holding us back with an extended arm. He looked at me and threw up the sticks Ricus stated he said 50 meters, I didn't even get my rifle up. He growled and took off.... The lion flushed out of cover where he had laid down in the heat and in a flash he was gone. I did not get a good look at him. We continued the follow up and soon after the tracker spotted him again, he flushed again. Then we were all on edge the lion knew we were pushing him and how much is he going to take...This was far from any canned type hunt,

This lion didn't sit and wait for us, he knew he was being pursued and didn't want any part of it. The tracker pointed in front of us and the Ph's guns, all 3 went up behind me. The tracker set the sticks but the lion was in such deep brush I could see nothing. Then Ricus came over my shoulder and whispered where to look, and just look for pieces of him. I looked thru my scope and the first thing I saw was his 2 eyes staring my down filling the scope, I told Ricus in a whisper I had his head and face.

Ricus said put it on his nose he's lying head left, body right, broadside. Then I move those crosshairs about 12" to the right of his nose, find a opening thru the branches to have a true bullet path and let him have it. I squeezed that 7mm and the cat bolted out of the bush, He didn't make it 30 feet and he was stone dead.

If I had seen his size and mass when he bolted before I has taken the shot I may have been more nervous. But as it worked out, my goal of a one shot kill was all I had the think about. As I dropped my 7mm down off my shoulder all I noticed was 3 Ph's with their .416's, barrels about 12'" in front of me. 2 on my left and 1 on my right holding on the lion lying in another clump of brush he jumped into and died.

This White lion was an animal I always wanted, I mount dozens and dozens of typical lions every year, heavy mane, captive range and free range all types but I wanted something different. He is and will forever be preserved for the front of my studio and a showpiece for my work. He lived his life long and well, propagated his white lion genes and added to the livelihood of many a South African.

We next flew to another ranch about an hour away to take a female that was very old that was ready to be harvested. We arrived and met up with a German hunter that had been pursuing a male Lion for 4 days with another PH that till then had no luck. They had a few fleeting glances of him running thru the bush but no reasonable shot had presented it å£®elf.

This worried me as we had only 3 days till I left for Zimbabwe. Luckily we were informed they had the white female on trial cam the 2 nights before on a dead gemsbok that had been put out to bait the lions. We went out that day but only picked up her track the next day and worked her till we found her,

Same things happened we heard her break cover a few times and found where she had been lying and bolted when we where approaching , she did this a few times over the distance we traveled and finally found her hiding under the canopy of the bush. It was again stalk behind the nervous unarmed tracker . My 7mm cracked and took her with one shot a frontal heart shot, an quick and fast death, she never moved. 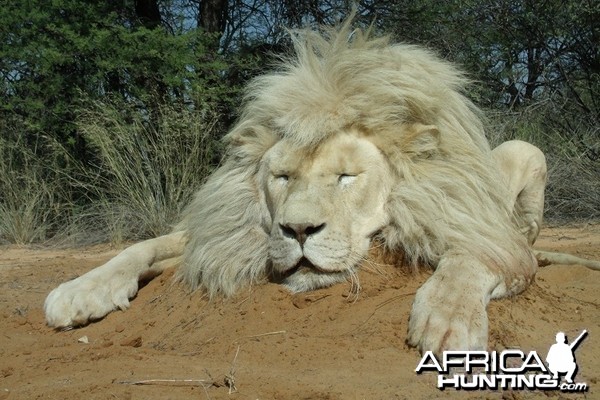 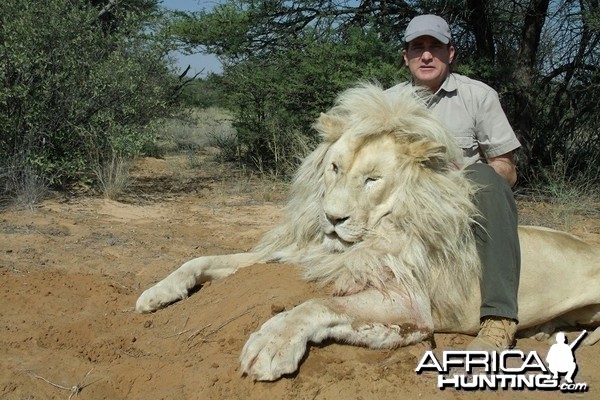 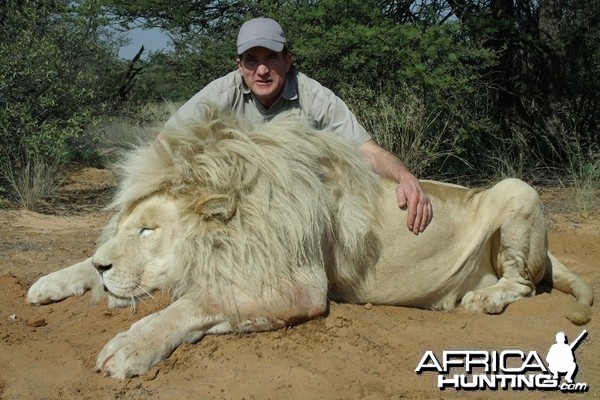 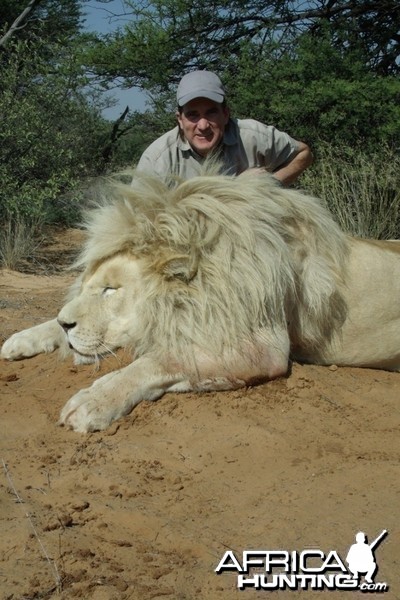 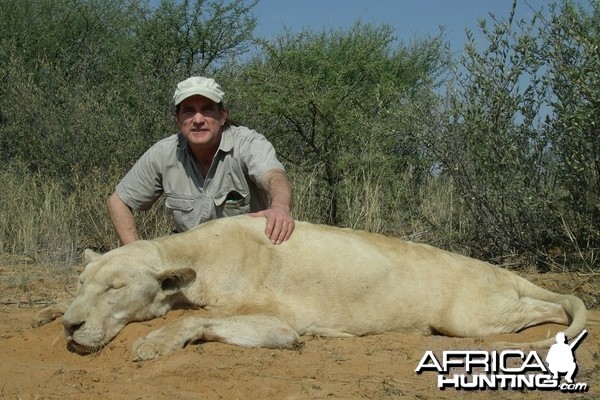 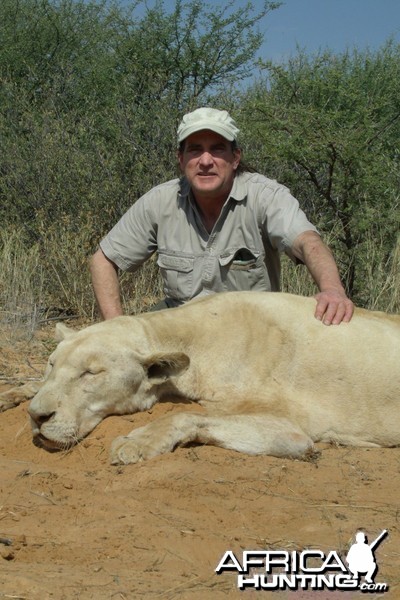 I can't recommend White Lion Safari's and Ricus Devillers enough. I am talking to him now about a hunt for my 2 sons and stepson and myself for Nyala next year.And who knows maybe another lion.

Many many more pictures to come, will be adding them over the next few days.

Beside a good time you have some excellent trophy's

Thanks for the hunt report, I bet that lion is going to look stunning when mounted!

enysse said:
Thanks for the hunt report, I bet that lion is going to look stunning when mounted!
Click to expand...

X2 Cant wait to see the mount.
Why we hunt, even lions? Real hunters need thriving wildlife, so we help make it happen. - Olivia Nalos Opre

enysse said:
Thanks for the hunt report, I bet that lion is going to look stunning when mounted!
Click to expand...

Any idea as to what you are going to do?
Jerome Philippe, Founder of AfricaHunting.com

Great Hunt and Report love those Lions hope your wife had a great time. Be sure to let us know when you have the mounts done next time I'm in the Michigan area I'd love to come by and see them. Bob
Enjoy Life Now! It has an Expiration Date.

What a thrill you and your wife experienced. Those are some of the most beauteous lions I have ever had the pleasure to view. Nice.
B

Great to finally see and read the stories of your white lions. Any pics of the mounts? Wonder why they are white, to much milk? MAybe it washed out their color.

Did you have those lions Alum tanned?
D

Awesome pics I didn't even know they had blonde lions
You must log in or register to reply here.

SOUTH AFRICA: My Son & I Hunt With White Lion Safaris
2