I hope to post a brief report about my recent trip with Rhinoster Hoek soon. In the meantime, here is a short story about how to make your host (and PH) very happy.

In May of 2019, I landed in PE and immediately went to a Bed and Breakfast to sleep off some of the jet-lag I always seem to experience when in Africa. I think I was in bed about 3 pm and slept through until about 6 am, save a few hours where I texted back and forth with my wife. Warren picked me up shortly before check out and we then set about to run some errands in PE. Afterwards, we made the two hour trip to Kinglsey where he and his wife Belinda make their home.

After giving Belinda a great big hug, I settled in and stowed my gear. Warren and I went to the short range and I shot the 243 to re-familiarize myself with this gun. We then drove onto the hills opposite the farm to check a game camera I had left as a gift on my last trip. This camera has been in the field constantly since May of 2017 and I loved seeing how this camera had faded from so much use. We then set out for the evening to see what we could find.

As it turned out, some kudu had beaten us to our spot and were feeding in a small opening below us. Over the course of the next hour or so, more kudu began to feed out onto the opposite hillside. As we became lulled into watching the various kudu, a jackal surprised us and lit up with song not far away. I was able to pin point the source and found him in my binoculars on the slope opposite of us. After making all his racket, the jackal laid down and stayed there for much of the evening. Now, I have known Warren for about three years and I know that he believes there is a special place in hell for jackals. Warren raises sheep and has seen many times over what jackals can do to his flock. I also knew that it did not matter how big of a kudu showed up that night, that jackal had to die first. From there on, I casually watched the kudu and made sure to keep tab on the jackal.

As the hillside filled with kudu, the jackal got up as suddenly as he had laid down. The jackal scent marked a bush then seemed to start heading our direction with some determination. After confirming with Warren that he wanted me to shoot the jackal, I quietly loaded the rifle and slid into a prone position. The jackal seemed to be focused on our position and would stop then start again our way. I have called coyotes off and on through the years and this jackal seemed to behave as he was being called in. He seemed focused on our location and in a bit of a hurry, but not quite to the point of running. At one point he went broadside and I had him squarely in my sights; however, I believed he would get closer and sure enough, he set out our way again. He disappeared into a thicker patch of brush and when he reappeared, was much closer than I had expected. I found the jackal in my scope and reminded myself to be sure of my shot as I knew Warren would be pissed if he got away. He was facing us nearly dead on. The cross hairs moved slowly back and forth across his chest before finally settling squarely in the middle. The suppressed .243 barked lightly and the jackal fell backwards onto his haunches then over dead where he had stood. I knew I now had a very happy PH and host in Warren Rudman.

The male jackal had a beautiful pelt and will be tanned to remind me of a beautiful evening of watching kudu, duiker, and of course, a jackal. 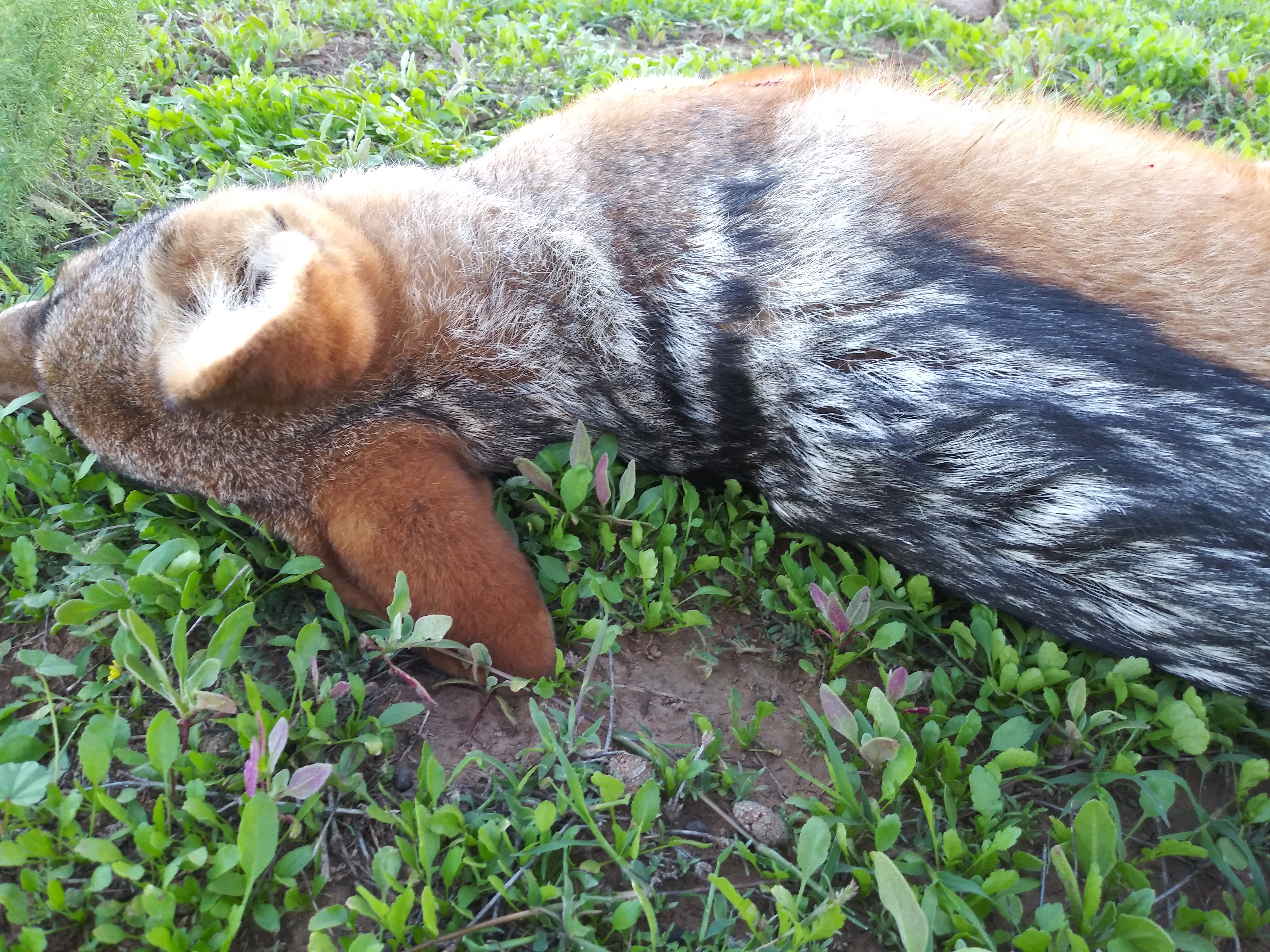 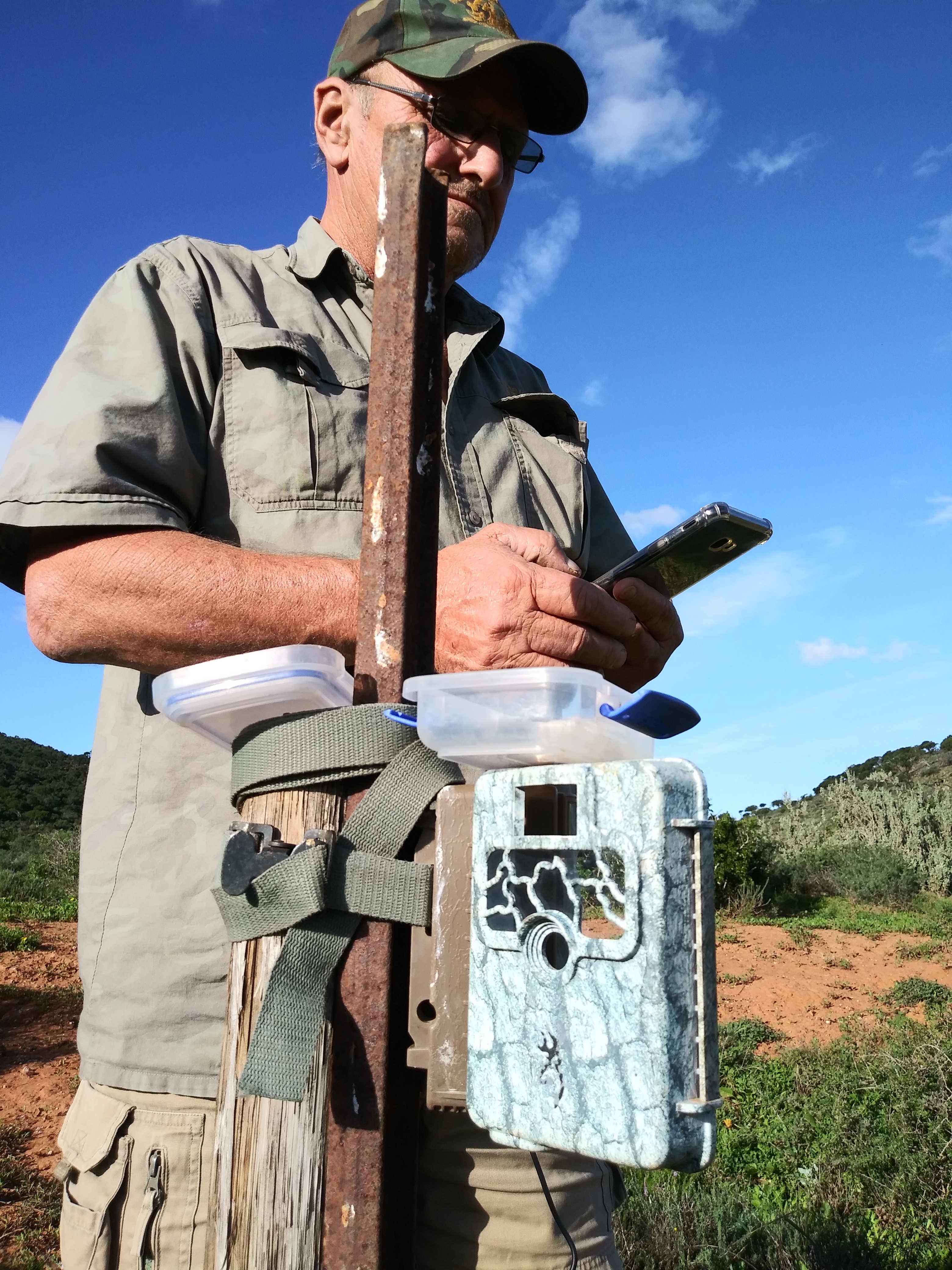 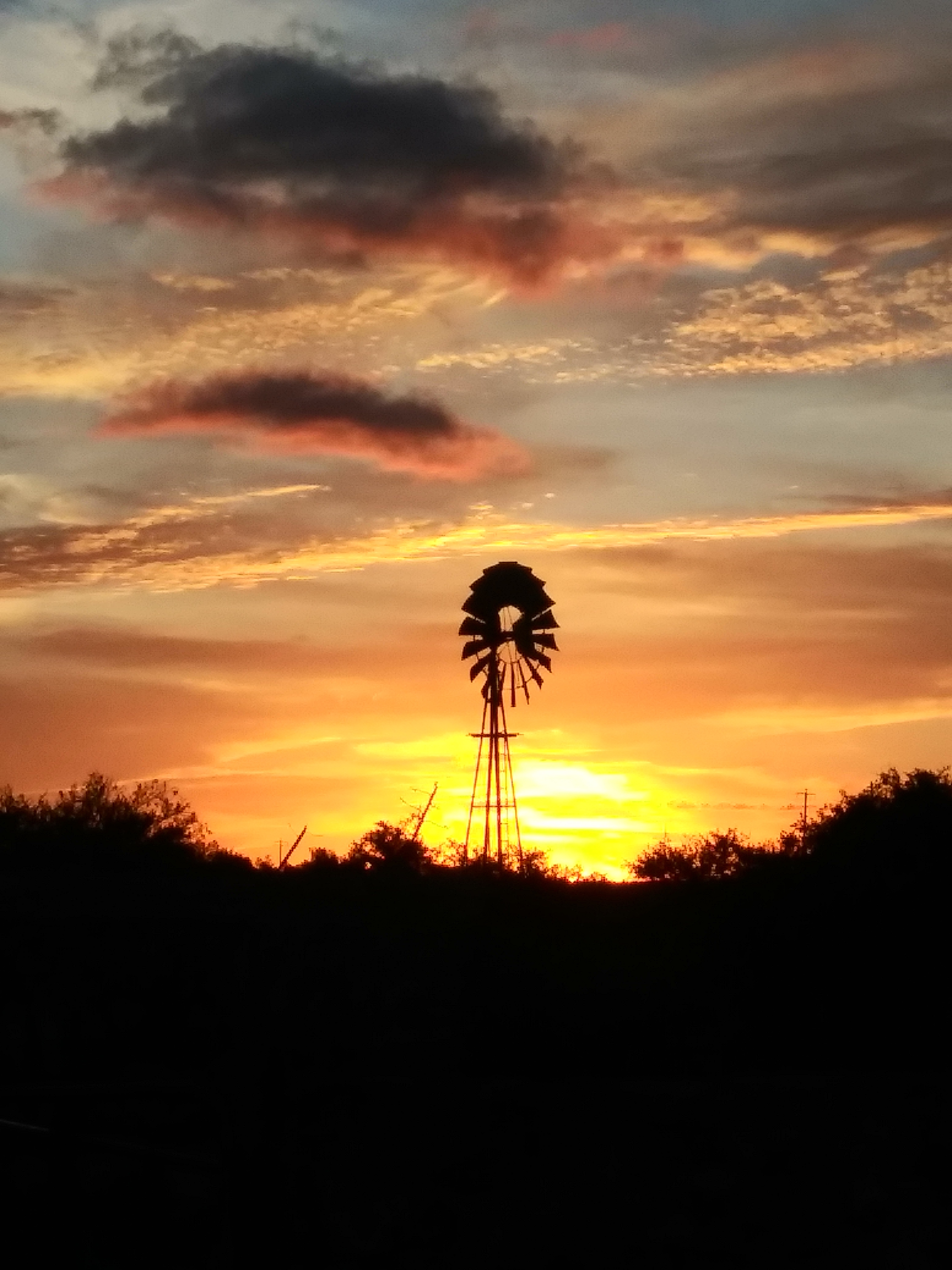 Very nice, and a beautiful way to start your safari.

I took my first African trophy at Warren's place, in 2015...a Kudu, of course!
Captain of the Luddite Society

Man I want a jackal so bad!
Africa on my mind.

Good looking jackal and fun write up-don’t suppose you are dying to share some of those trail cam pix with us. . .
Please 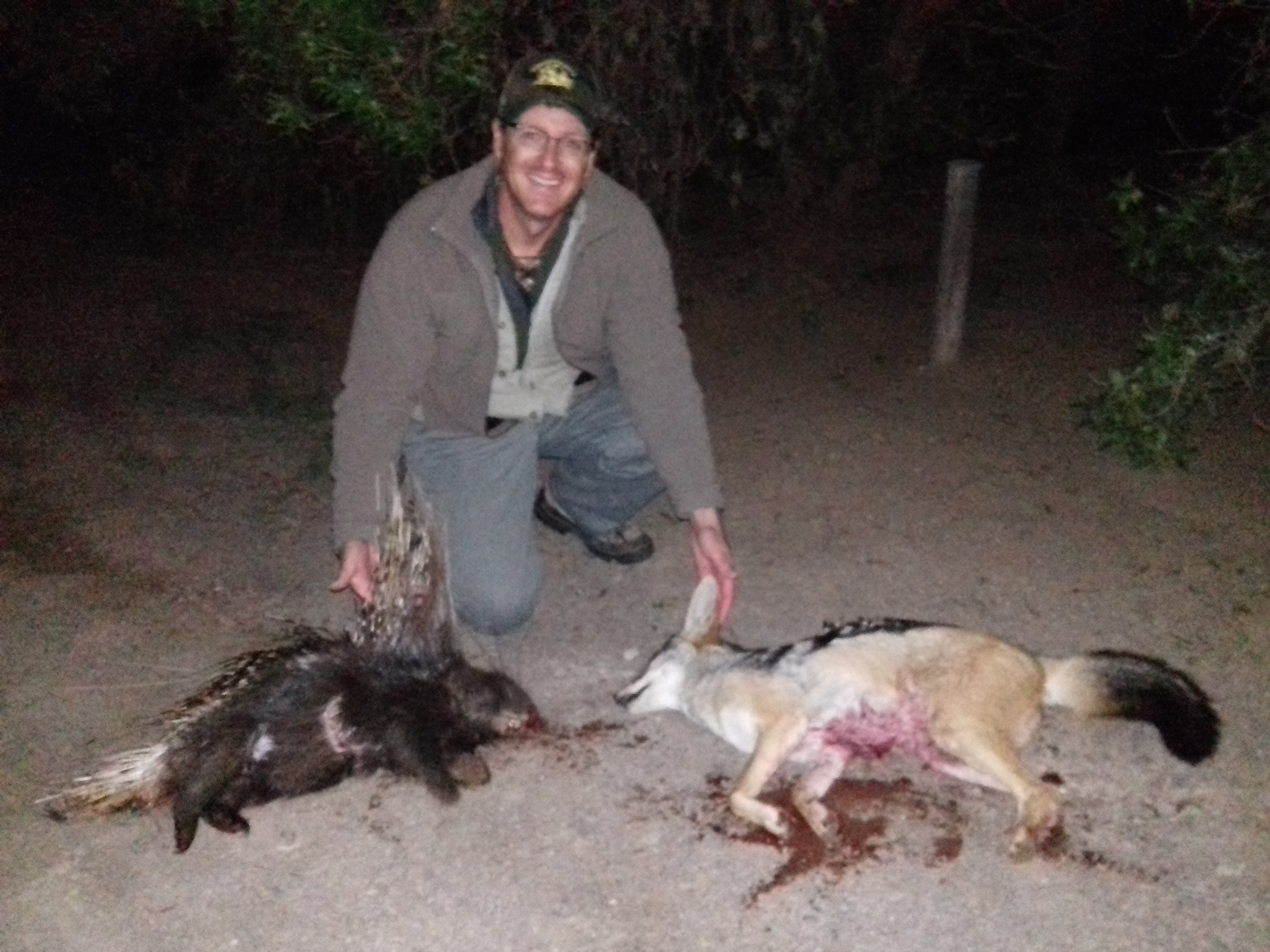 Life's a journey, enjoy the ride

If you’ve ever been to Rhinoster Hoek you have no doubt Warrens feeling about jackals. Spawn of Satan comes to mind.

I was lucky enough to make Warren a happy man last year with one of my own jackals, think i have 2 porkies as well from there. An amazing place and many a Kudu has been taken there.
I left a camera there as well my last trip, but the rains fell and the water came, but still get the texts from Randys cam, keep em coming

Can't wait to read more of this one!

After helping out, he owes you one. I hope he was able to put you on some nice animals.

Sorry for the lack of replies as I am camping in the woods now.
Warren now has 3 trail cams as I left 2 more for him.
Over the last 2 years he has sent pics of baboons, monkeys, impala, both black and blue wildebeest, jackals and of course kudu. Some of my favorite are those of kudu bulls polishing their horns in the mud.
Life is too short to hunt with an ugly gun

These are the last 3 he sent me; a sequence of kudu watching a jackal. 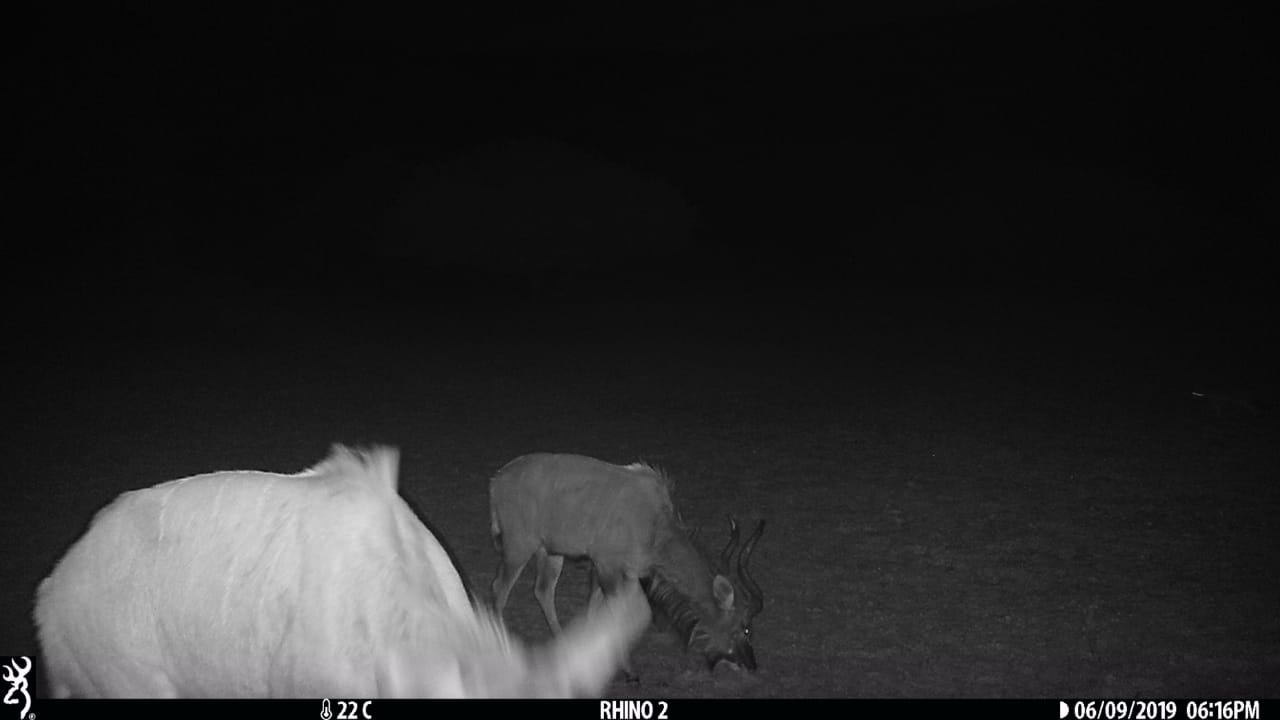 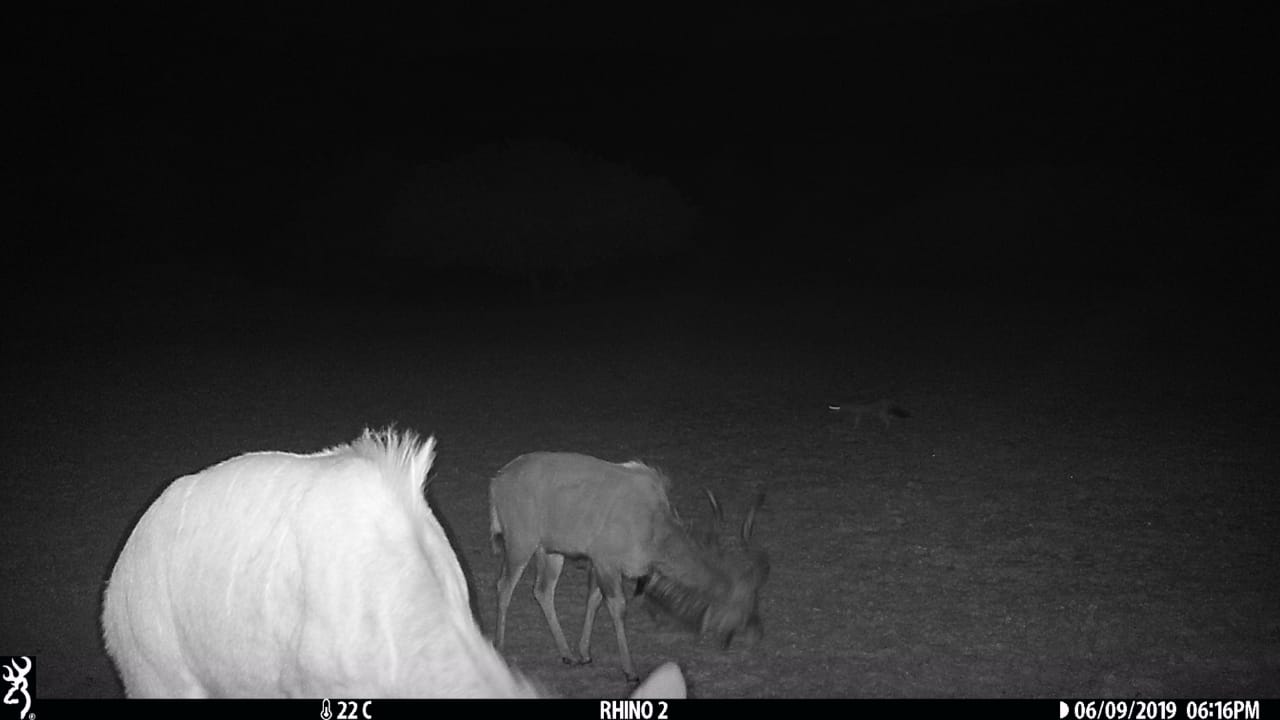 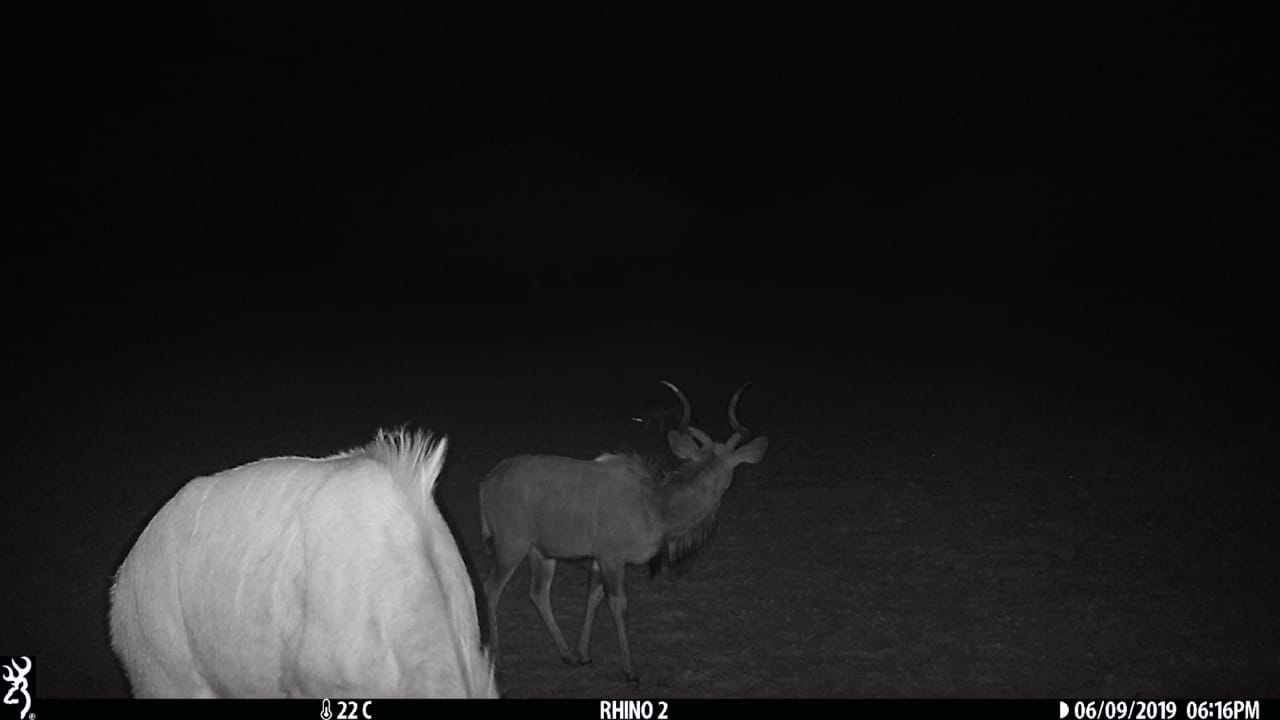 Life is too short to hunt with an ugly gun

My greeting to work this morning: 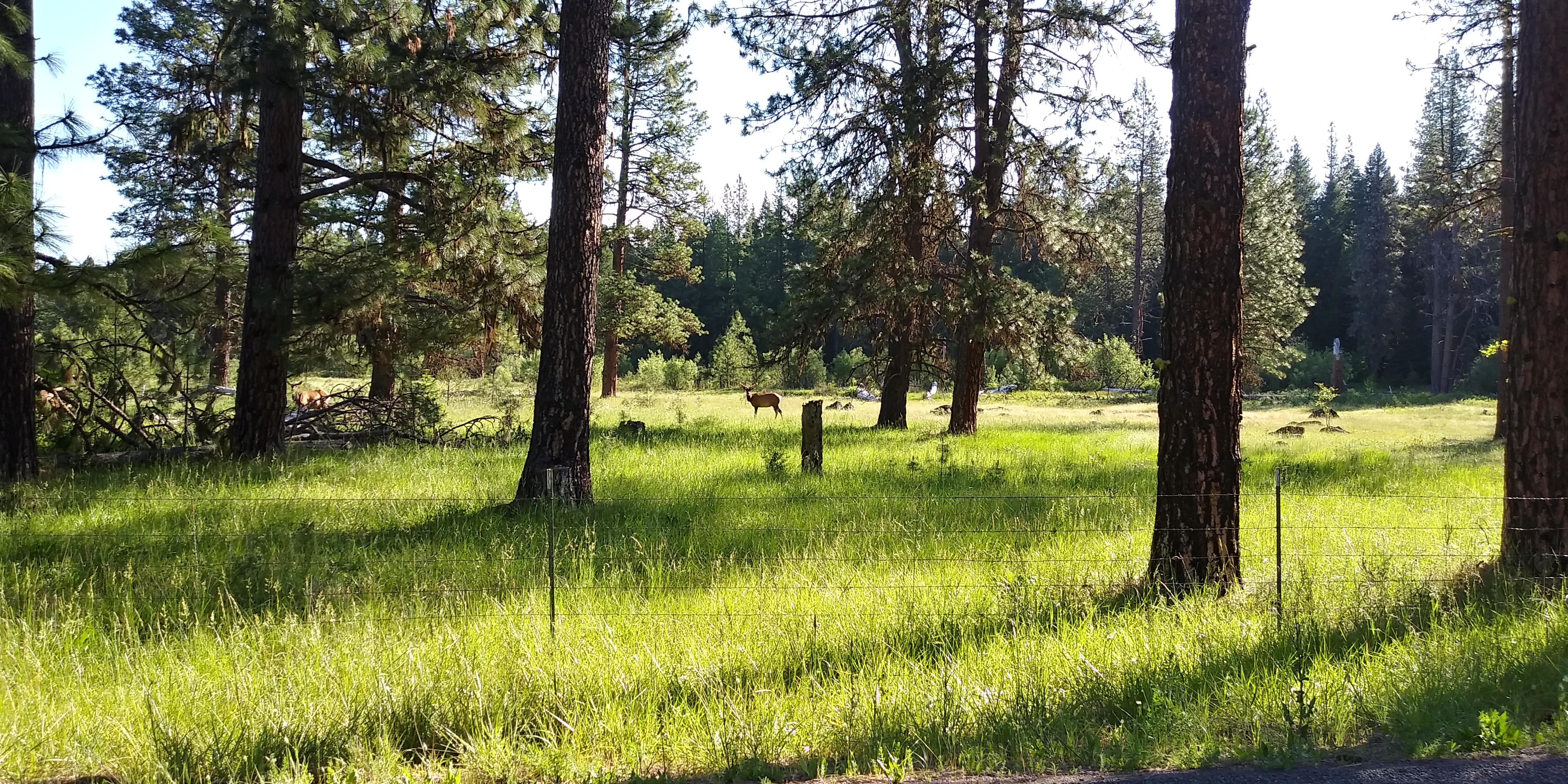 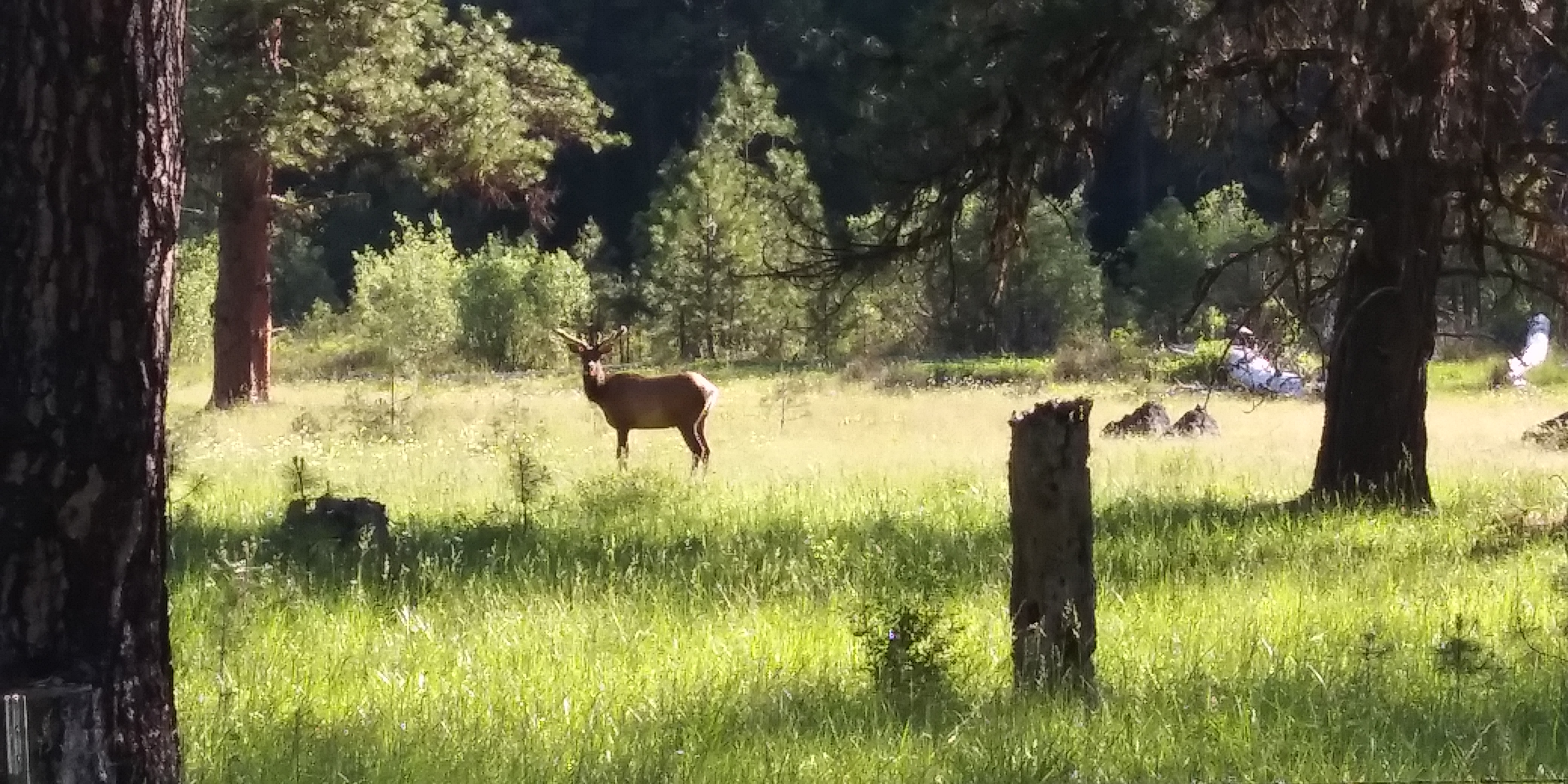 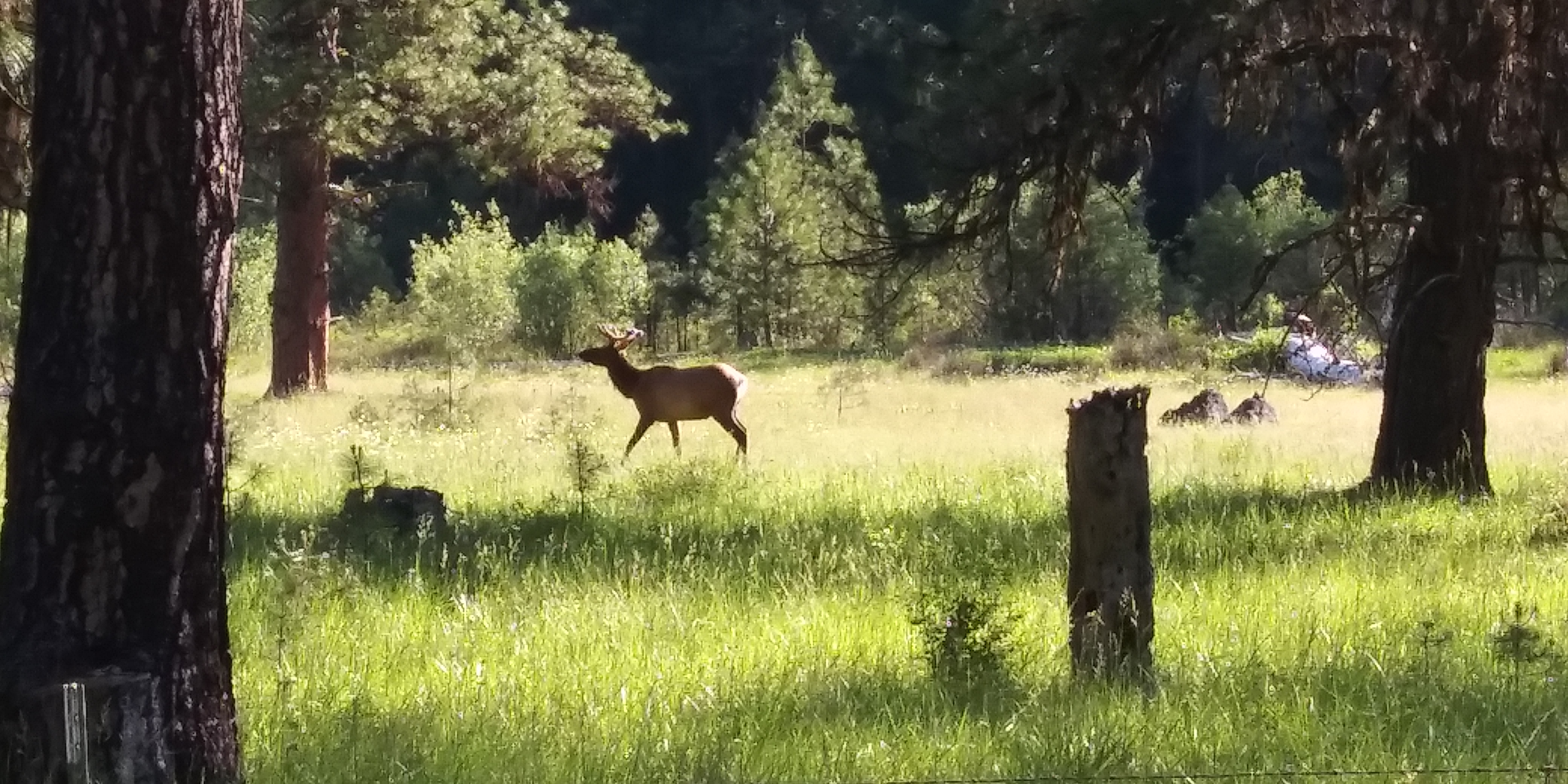 When you wish for a remote rifle mounted to the camera. Just look at the time. Brazen! 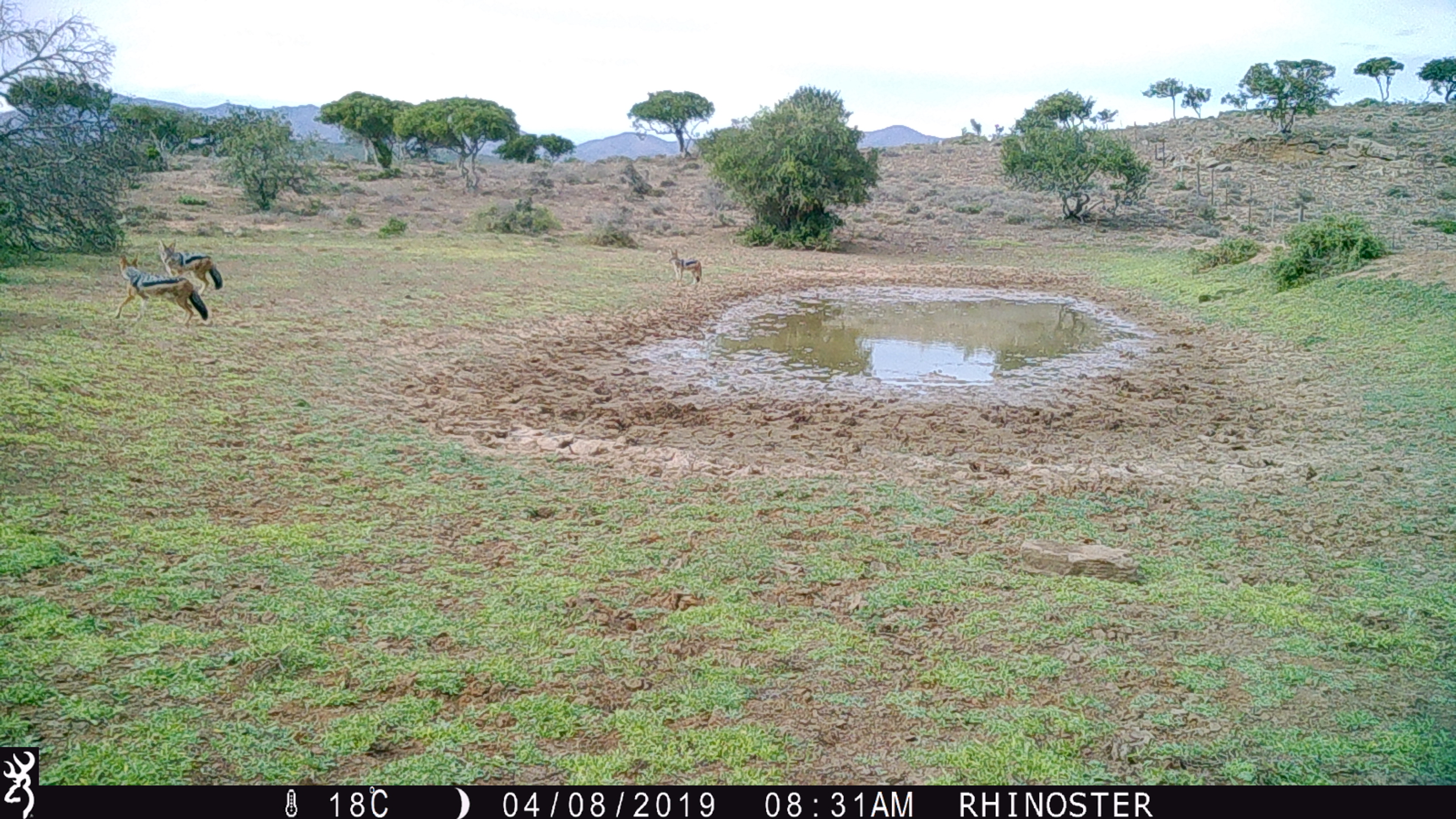 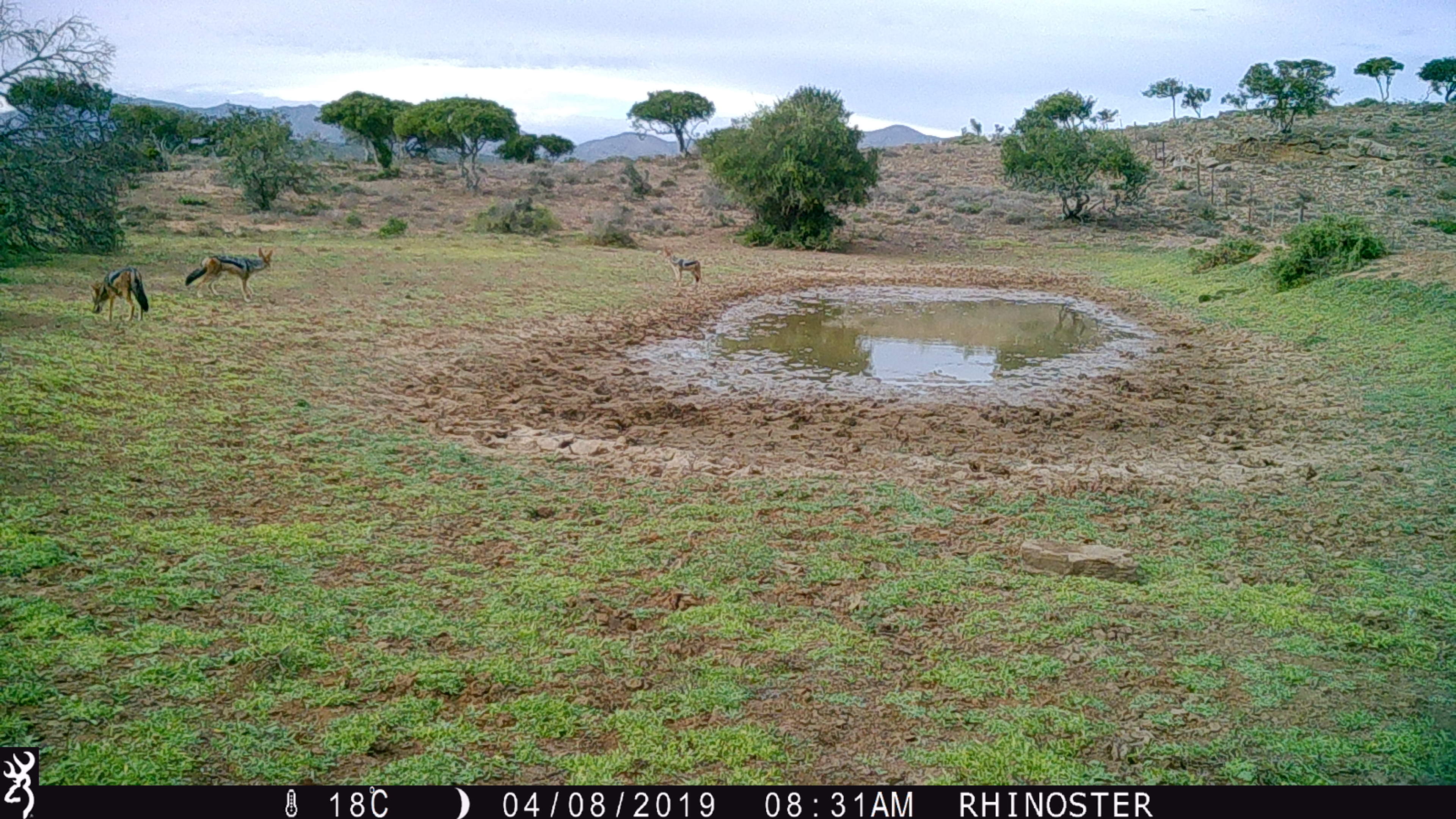 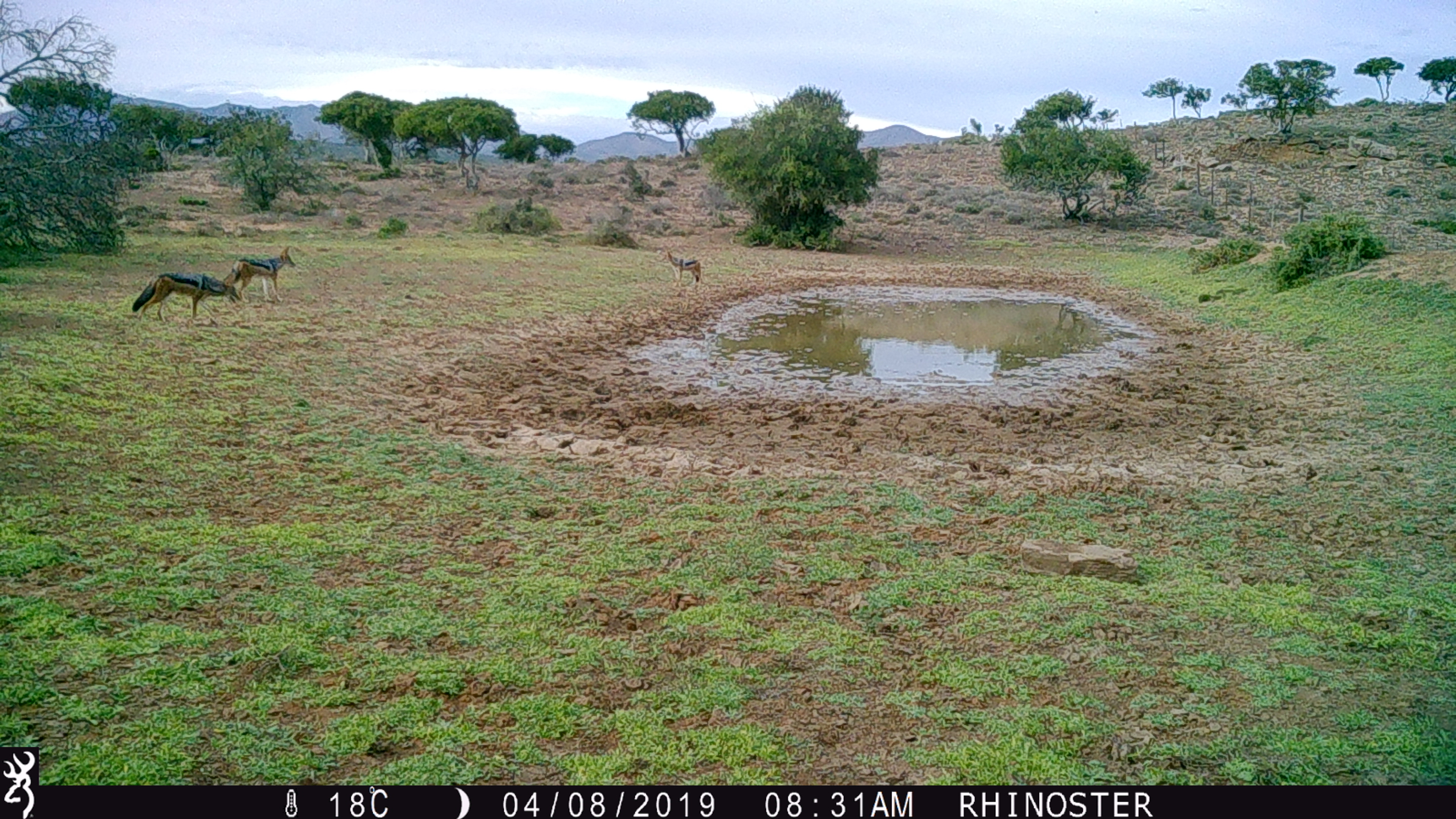 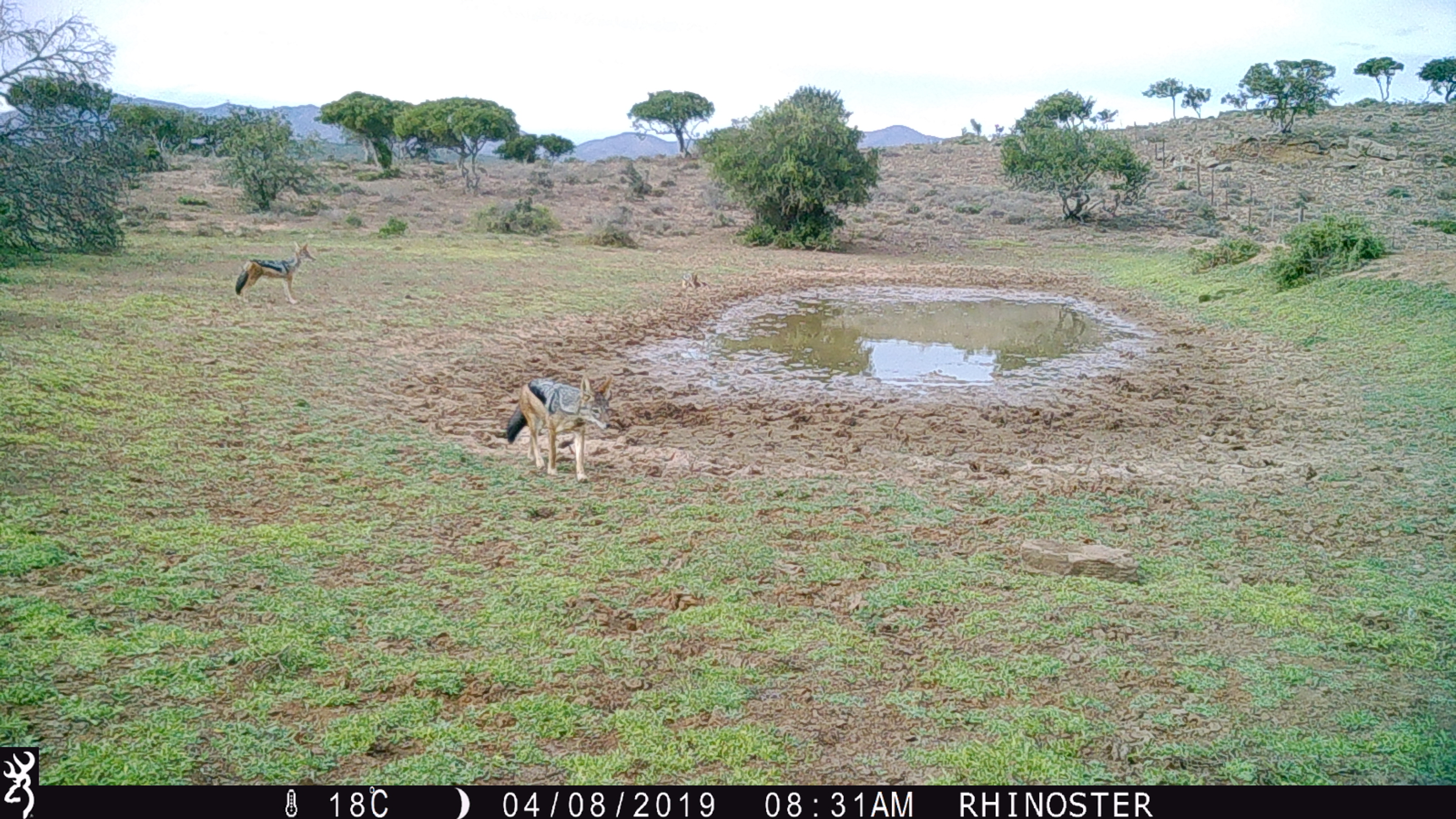 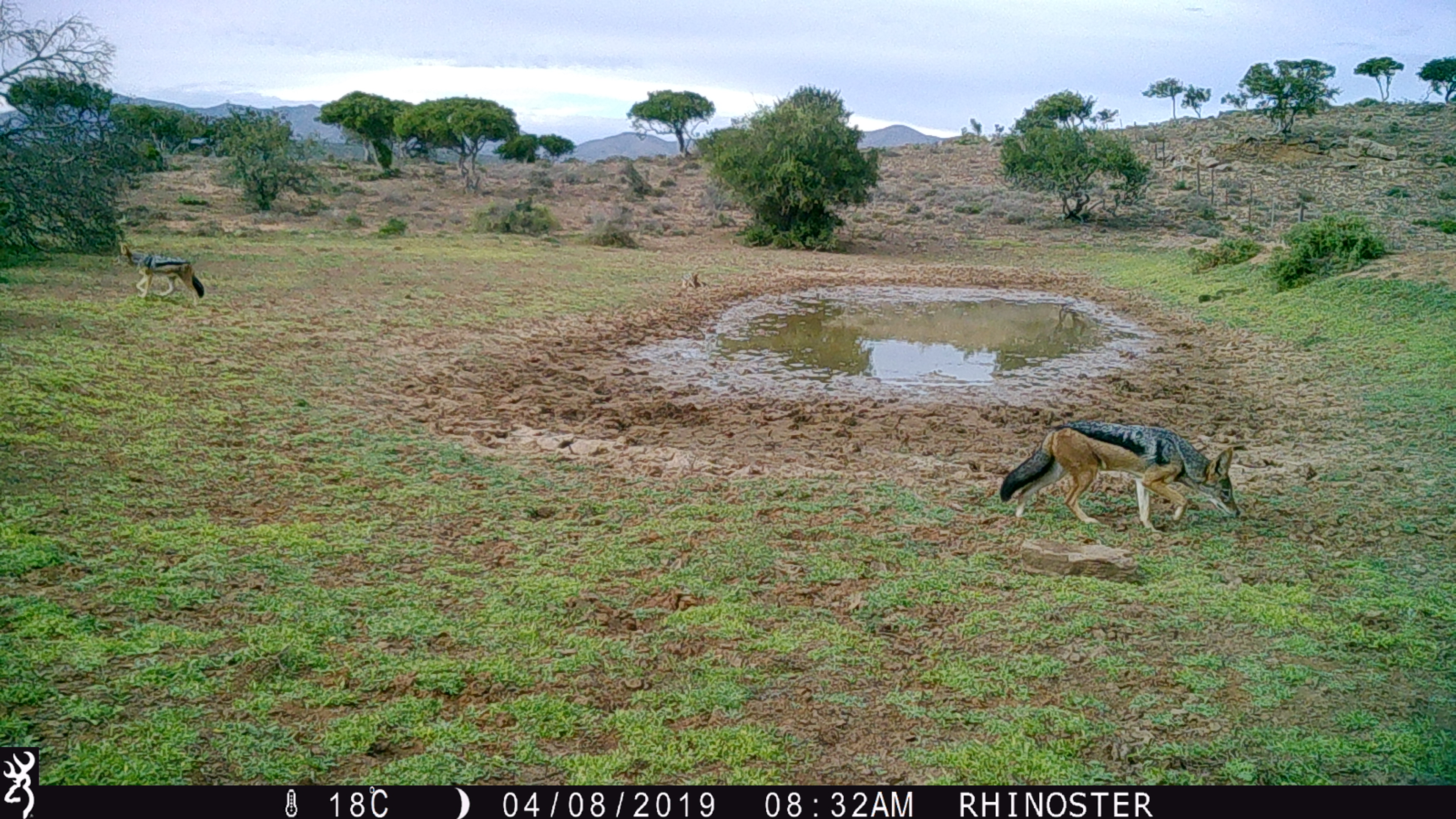 Last edited by a moderator: Jun 16, 2019
Life's a journey, enjoy the ride
You must log in or register to reply here.