The crickets are screaming now. They lost their tune about 20 degrees ago. I've decided that whoever attached the adjective "screaming" to the word "hot" had to have experienced the Karoo on a day like this. It's 41 Degrees Celsius / 105 Fahrenheit today. I'm sitting on my chalet deck writing this hunt story. It's the second last day of our 2015 season and my boots are almost hung up for the year. Hopefully there's a bushbuck in my short term future to make a fitting end to the season. 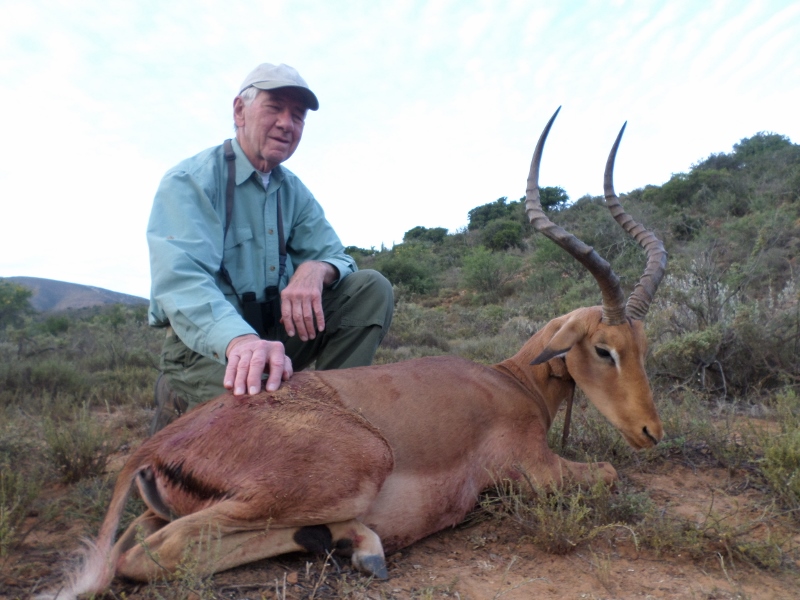 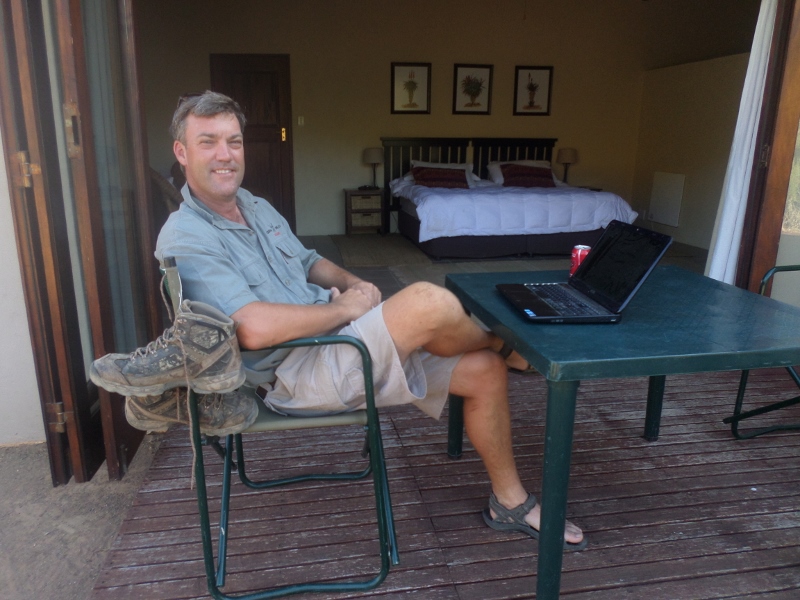 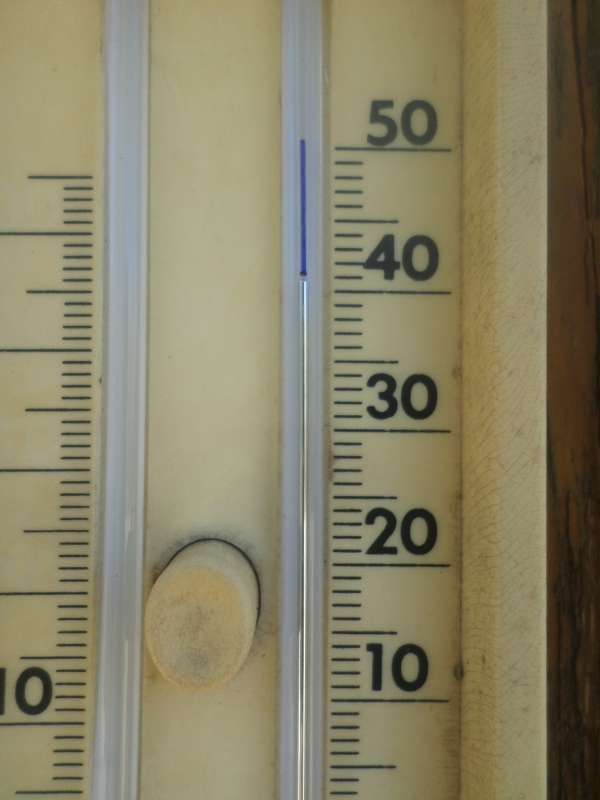 I'm hunting with Howard from Breckenridge, Colorado. Howard and his wife, Maggie booked a 6 week cruise around East Africa and Asia leaving from Cape Town and Howard decided that in booking the cruise he'd gained enough credits to suggest a pre-cruise hunting trip with Karoo Wild Safaris in the Eastern Cape, South Africa. Guys...take note of Howards strategy, there's valuable lessons to be learned there! When Howard and I first started emailing in 2013 about planning a hunt in the screaming hot month of December I was apprehensive at first. However I agreed because

1. my wife likes to shop at Christmas

Howard and Maggie booked Hank Daries of Ulungele Tours in Cape Town to drive them direct, non-stop to our lodge. It's a seven hour drive and they wanted to see the countryside for themselves. We woke up at 4:30am the next morning and after a brief range session where Howard shot beautifully with my Sako .270 Win, the hunt began in earnest. Every day we woke up at 4am, hunted until brunch at 9am. Rest, lunch, pool, reading, writing hunt stories until 5pm and then hunt until 7:30pm. In bed by 11pm. The things I've learned about hunting in the heat of summer are

1. Mitchell, my tracker, will take his jacket off when the temperature reaches 95 Fahrenheit

2. Mitchell wears a shirt under his jacket

3. It's best never to utter the word "hot" and expect anything positive to come of it.

4. Kudu are drawn to the flowering Acacia Karoo trees in December.

6. I can't sleep during the day no matter how tired I am

7. You need to bring your A-game in the sweet-spot time around sunrise and sunset or the hunt will be a total bust.

8. It is possible to hunt successfully in December


So those are my "hot" tips and observations for hunting this summer. Day by day this is how our hunting has gone so far.

Relatively cool today. Got busted sneaking up to a large springbok ram and then later some kudu cows barked at us as we moved in on an impala herd. Late morning, we stalked two blesbok rams and Howard put one down at 190 yards. That afternoon we walked along the acacia river bed and flushed a bachelor herd of impala. At 200 yards Howard was good to make the shot but they moved further away. We were engaged now and at 258 yards through my range-finding binos I hesitated in telling Howard to abort. The shot hit low on the shoulder and I radioed Mitchell to help us track. After awhile the impala jumped out and we put him down with a spine shot. A good day. 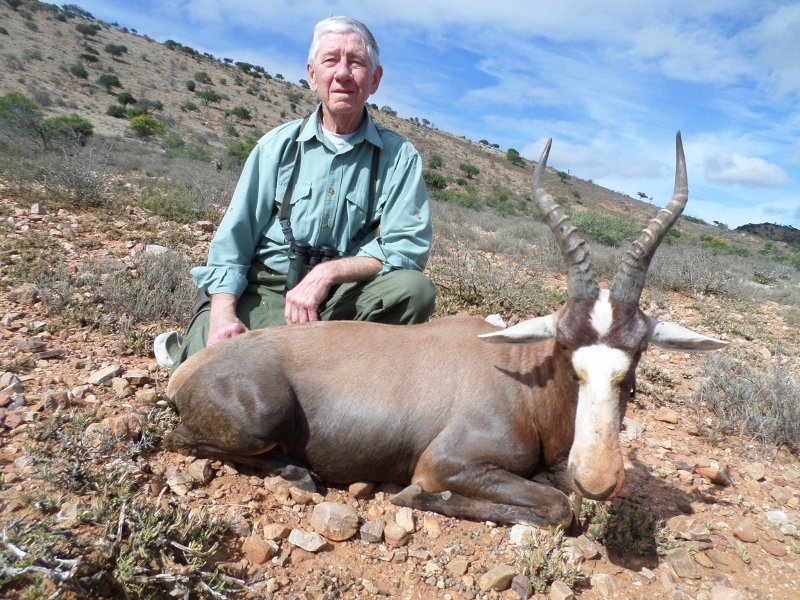 Morning hunt was a bust. Snuck up on some black wildebeest that afternoon and Howard put the biggest bull down with a neck shot. World class hunting... 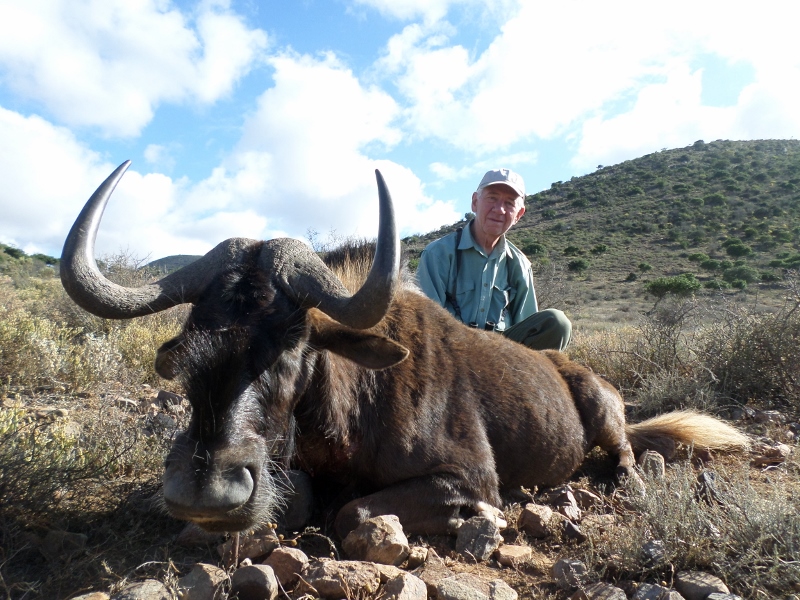 Morning hunt was a bust again. We're doing something wrong!? That afternoon we hiked along an acacia-lined river bed for a few miles. Spotted some big nyala bulls but they weren't on the list. At the big dam we went into the acacia thicket and popped out near the dam inlet where big kudu are known to graze. Saw 20 blue wildebeest, about 15 nyala, 2 average kudu bulls and 30 waterbuck grazing on the green of the waters edge. One nyala bull 10 yards to our right facing away from us. Chose the biggest blue wildebeest bull and Howard dropped it. Nyala did what looked like a nyala back flip and landed in the water. World class hunting... 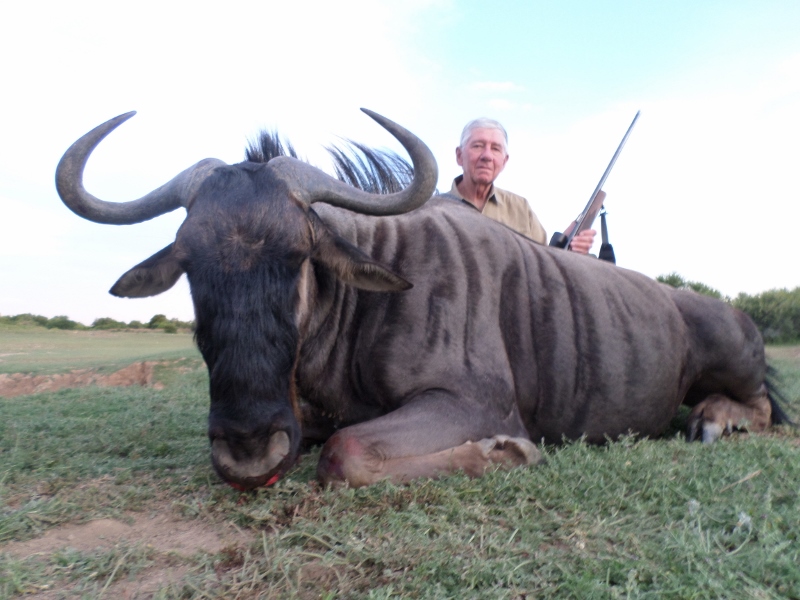 That morning we stalked two warthog grazing in an open patch in an acacia thicket. Everything just seems to be in the acacias! Got 70 yards out and we were taking our time judging the warthog boars tusks. He was a brute, long tusk....but couldn't get a glimpse at the second tusk. Finally did and was thinking this is a monster, we need to do this right when something changed and the boar went into that freeze frame they do when they're about to take off. I got Howard onto the sticks quick but we were fighting against time and the warthog fled as Howard squeezed and sent a puff of dust behind the pig. So...morning hunt was a bust again. Late that afternoon we bumped into a big kudu. There was some bush in our firing line so we moved into a better position. At 160 yards we had a good chance of making the day a success. The bull stretched to eat at a branch high up in a tree and Howard took his opportunity. The shot hit left. We were gutted. Went back to camp and drank too much.

This is the day we stood up to be counted. We were going to grab our hunting destiny. The morning hunt was a bust!? To make up for it we headed out a little earlier. It was hot and I was just saying to Mitchell that we were probably wasting our time when shortly afterwards he spotted two big kudu browsing in the "spekboom" thicket. We left Eric at the truck and the three of us snuck up on these sun-loving kudu. We waited patiently for half an hour for them to graze into our firing line and Howard made it count with a great lung shot. I was over excited and tried to high five Howard. He wasn't paying attention and I slapped him in the face instead.

While the guys took the kudu to be skinned Howard and I decided to venture into the mass of acacia thicket below the big dam. We bumped a number of animals and were about to radio the guys to come get us when I spotted a boar grazing along the edge of a dry riverbed. He wasn't anything special but we decided to wait in the event that he had unseen company in the vicinity. It turns out he did...and that's how Howard shot his warthog. Went back to camp and drank too much. 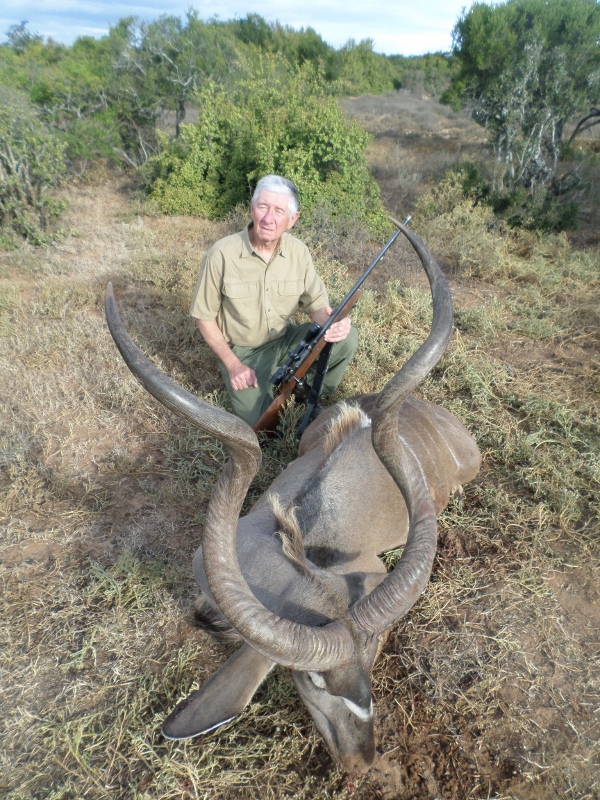 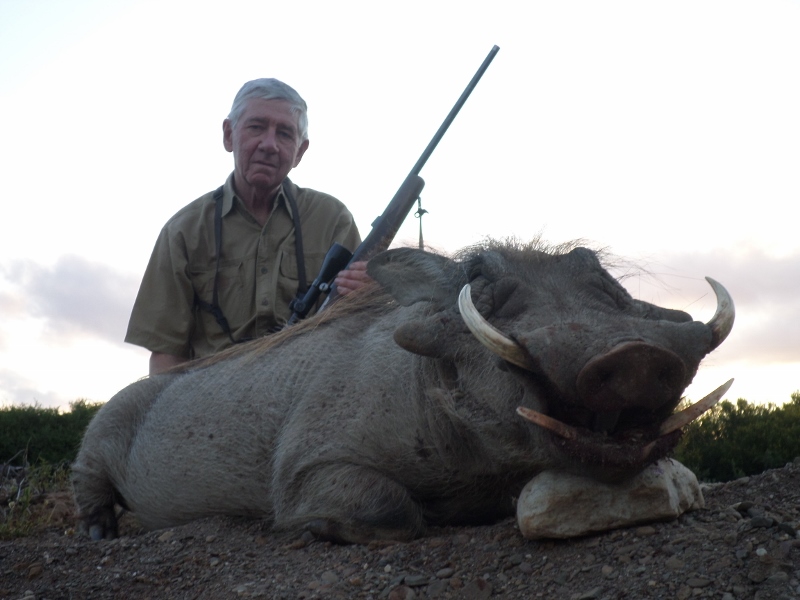 Super hot day. We shot a non-trophy female impala that Howard wanted to mount alongside his impala ram and then fled for the refuge of the camp. Late that afternoon we stalked some springbok. We stalked and stalked. Howard admitted that hunting springbok was harder than hunting pronghorn. Later, he admitted that it was harder than any hunting he'd ever done before or would ever likely do again. I agreed with him. Later as the raging sun was going down we finally got into position A and Howard shot a great springbok ram. This was first class. 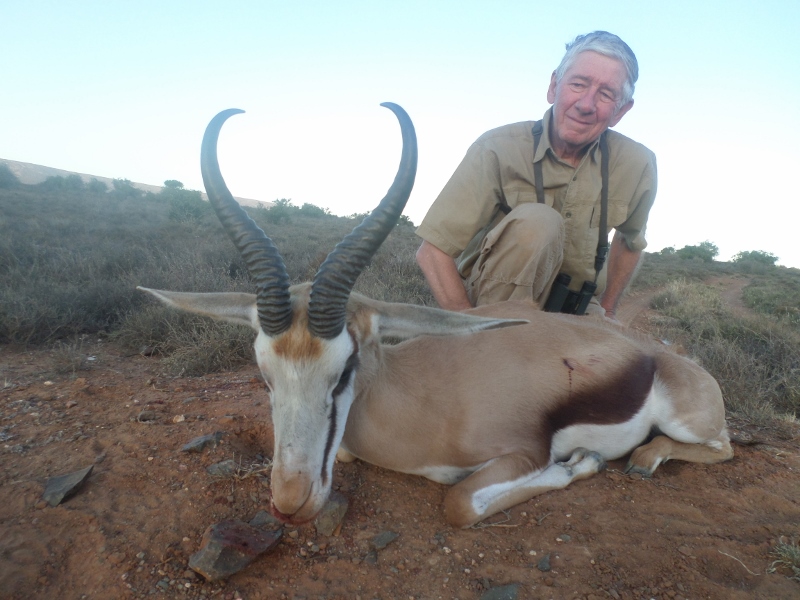 Dangerously hot today. We're well on schedule so scouted around a bit but didn't do much hunting today. Howard had a shot at a kudu cow for a mount to go with his kudu bull but unfortunately he missed. Maggie placed this .270 cartridge in a tree and told us to solve the Christmas riddle?! Any big thinkers out there? 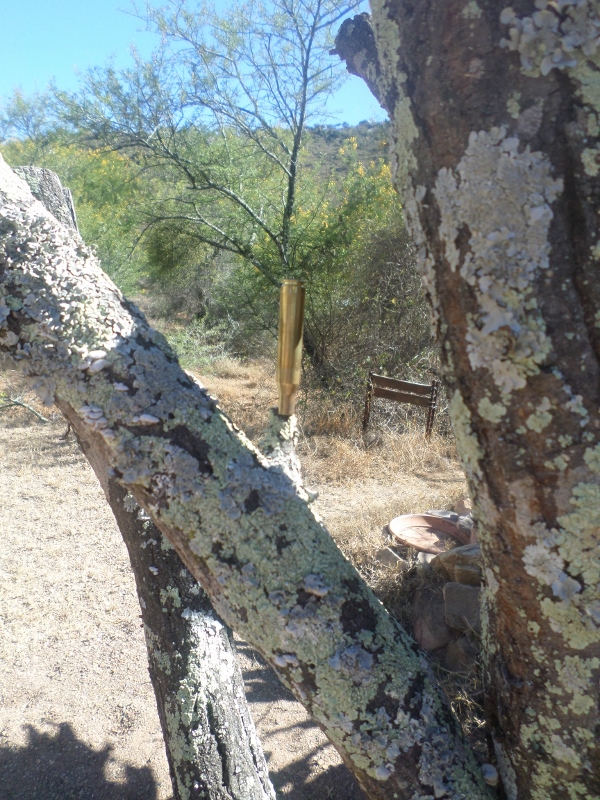 Looking for a bushbuck this afternoon and tomorrow...wish us luck!

Well done, both the hunting and the reporting.

a cartridge in a pear tree?

A cartridge in a Pear tree?

Some good pics and nice trophies. Congrats to you and your hunter. Bruce

Congratulations for surviving that kind of weather and being willing to get up to hunt at night.

Nice story, and photo's. Kudos to the hunter for braving the heat. I live in the Southern Arizona desert, and it gets blistering hot. I couldn't imagine hunting when it's that hot out.

I'd take a slap to the face for a kudu any day! But that heat would kill me! Great reprt and awesome trophies...fingers crossed for the bushbuck!
"I don't need to shoot farther...I need to hunt closer." - G. Sitton
V

dobber said:
a cartridge in a pear tree?
Click to expand...

Some razor sharp guys on this forum! I'm going to tell Maggie and claim the credit for solving the riddle

That looks a lot more fun than practicing football in Texas in August. Great Hunt.

Good lord and I thought it was odd hunting in 67 degrees F in December in Pennsylvania for whitetail. That resolve on the part of both hunter and PH takes the cake.

Great report and photos. I got a good laugh out of you slapping the client.

105 degree temps is a little more than I would care to hunt in! But it looks like the afternoons were very productive and that's what matters.

Well done to hunter and PH... tough hunting in that heat! VERY nice springbok, with perfectly matching horns.
My late father always taught me to hunt EARLY... his wise words always... be in the bush when the sun comes up... not after it comes up!!
For those who do/ have done this, it is also the coldest part of the day... as the sun comes up the night dew rises and chills us to the bone!! 30 minutes later jackets off and off we go.
I have shot MANY kudu and bushbuck early morning... as they bask in the first sunlight to get rid of the night chills..
I expect to pass this way but once.... any good thing that I can do for my fellow man, let me not deter, but do it now... for I do not expect to pass this way again.
Anonymous
V

Thanks for the comments guys. We got a bushbuck this morning! 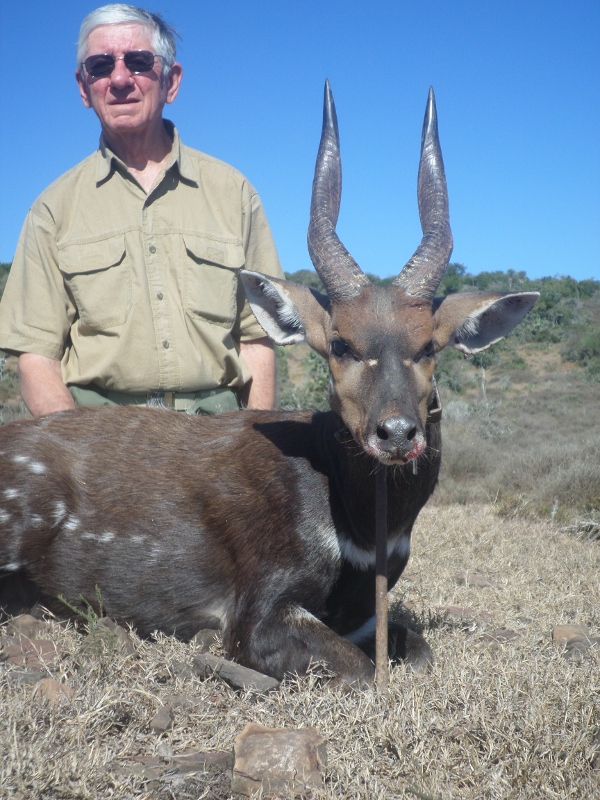 Merry Christmas to everyone!

Great trophies and a great story. I always felt hunting in the heat helped my stalk but it does make the spotting more challenging.
Micah 6:8 - Seek Justice, Love Mercy, Walk Humbly with your God
You must log in or register to reply here.