Just returned home from my first ever Safari, and I want to start out by saying what a wonderful experience it was for me (relatively new hunter) and my friend Lorna (long time hunter.) We both read some disparaging reviews here mostly about the prices but also about the taxidermy issues on this forum, but I won this this trip at a Friends of the NRA Dinner and probably wouldn't have thought of going so far away to hunt. I initially thought I would be happy and lucky if I got one trophy but I discussed my budget with Debbie, and the fact that I would be happy culling for meat to donate to the orphanage for their Hunt Against Hunger program and she worked out a deal that fit my budget and included the Zebra which was on my wish list. I also discussed with her what I read here regarding the taxidermist and was pleased to find out they are using a different company now.

The hunt that I won was for my choice of one of three Plains Game Blesbok, Impala or a Warthog, and I was able to bring a friend for $800.00, since Lorna is the one who introduced me to hunting, I invited her to join me. The trip was scheduled for last year in June, but COVID....

We arrived in Johannesburg on August 2, in the late afternoon and were walked through the procedures to pick up our rifles fairly quickly...our PH George Nell met us there and drove us to the property which is in Sterkrivier Limpopo Province. Pretty sure that George didn't know what to think about us old ladies, but he was very professional and made us feel at ease. I let George know my concerns about hunting, as I had only gone deer hunting twice (3 harvested) and Pheasant hunting a handful of times, and that I wasn't sure about how well I would do stalking or taking shots at running animals (I'm old, fat and have arthritis) and he reassured me that we would work within my limitations. Once we were settled into our "house", there was a meal prepared for us in the lodge. The lodge and our house were very nice, clean and comfortable and the meals prepared by Michael our chef were just great. I could not have asked for more.

On the first day we went out and confirmed our rifles were still sighted in properly with George and our Driver Lucas. We met Debbie Barnard and Henry Kitney who is a PH as well who was assigned to video our hunts. We were the only hunters in the camp, as the other two hunters were unable to make the trip. I hope to have the hopefully not too embarrassing video to share with you soon, but I will attach some photos from my hunts. So back to first day I had opportunities for a Blesbok and a Springbok and missed completely each shot. I thought for sure I would just be going home empty handed. I shook it off after lunch and somehow managed to unf$!k myself and I made a good shot at a Blesbok. Lorna took a huge Kudu!

Day two in the morning, I had an opportunity and was able to take a Black Impala, and after lunch we visited a neighboring property and I was able to take an older female Zebra....I blinked while firing and wasn't sure if my shot was good luckily it was and the others saw that she went down. I know I need to work on the blinking thing.... Something I will also add is my total respect for George and Harry for the way they directed our attention to specific animals taking in consideration what we were looking for but also conservation of the herd.

Day three we took it easy in the morning, and just set up a blind and a pathway towards a bait station that was in place for a night hunt of the bushpig. We returned before sunset and I borrowed Harry's 223 rifle with a thermal imaging scope and got set up on the sticks. We sat for about three hours, and finally two bushpigs showed up. Harry told me which one to sight in on, and had the image on his notepad as well which allowed him to tell me which one to harvest. This was my favorite hunt of all because of the exercise in patience it gave me, even though it was freezing and I had to wear four layers because I hadn't planned on hunting at night. The bushpig ran about 10 yards and dropped, Harry's dog Zimba did the locate for us.

Day four we went out looking for an Eland for me and Lorna wanted a warthog, we saw one warthog but it got away really fast. We saw a pair of Eland but I couldn't get a good sight picture and couldn't get my eye relief right...not sure what was wrong but I was just soup sandwich. The Eland kept moving and so we got out and tried to track them on foot, I was slow getting set up on the sticks and missed another opportunity...we kept moving with them and finally after about two hours of real frustration I was able to take a shot and hit high on the shoulder and the Eland went down, but was slow to pass so I had to give him another round to finish him. We took the afternoon off of hunting and Debbie let me try out a couple of her larger caliber rifles, and George had me to shoot one off the sticks to get ready for a possible cull of a buffalo with a broken horn on another property.

Day five we took the morning off, and went out in the afternoon to look for Lorna's warthog, we only saw little ones and some mama's with their babies so we packed in and went over to Debbie's house to eat dinner and watch a Rugby game.

Day seven we went to the Munnik Conservancy two hours away to hunt for the broken horn buffalo, but no luck there so after several hours we left off and went back to our camp. We are now looking for a reportedly skinny male Kudu who needs to be culled, couldn't find him but just around dusk an opportunity presented itself for an older female golden Wildebeast. My shot was low on the lungs and she sat down, but then got back up and it was getting pretty dark and I couldn't get a good position/sighting to finish her with the other Wildebeasts in the way. Harry let me borrow his rifle again so that I could get a second shot to finish her with the thermal imaging scope.

Day eight, we went back out to look for the skinny Kudu....still no luck, but we spotted an older female Kudu that was also ready for culling so I was able to take a good clean shot at her.

Day nine, we said our farewells to our new friends and I already have a plan to return. I loved every minute of this experience, I learned a lot and am so glad that I got the opportunity to share it with my friend and you as well. p.s. I am very happy the meat we harvested is shared with the employees and their families and a local orphanage as well as it was with us. My next hunt will deer in Missouri in November. 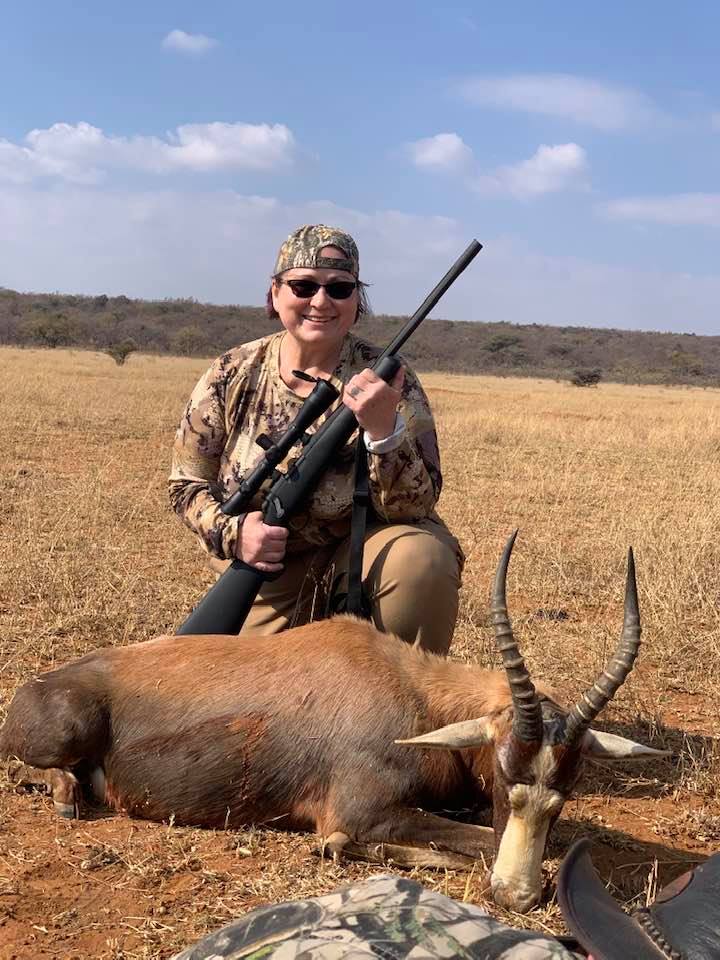 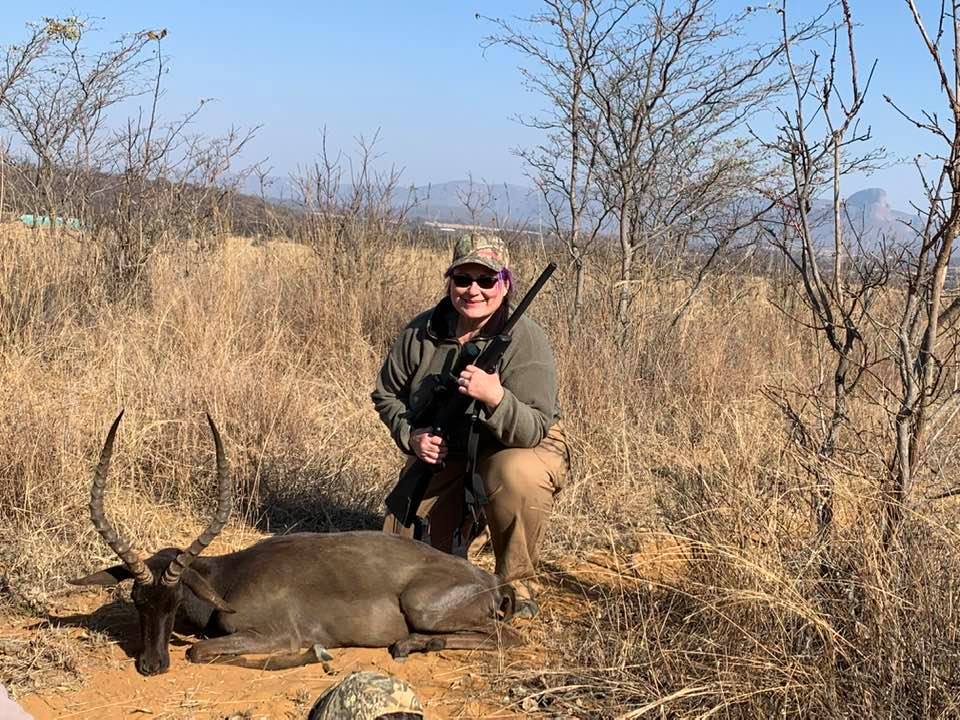 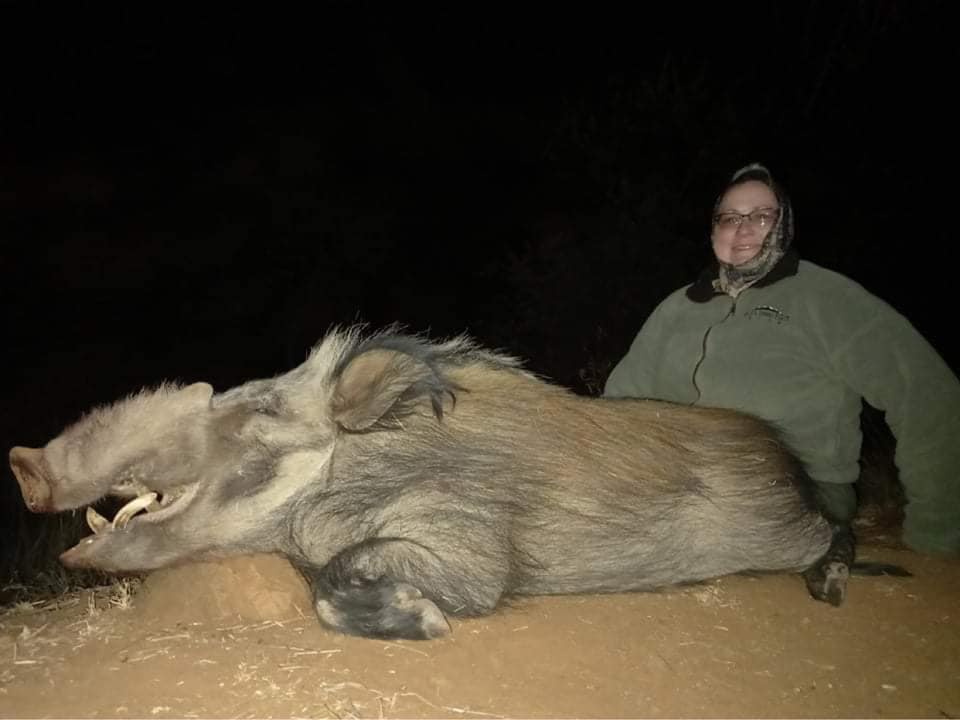 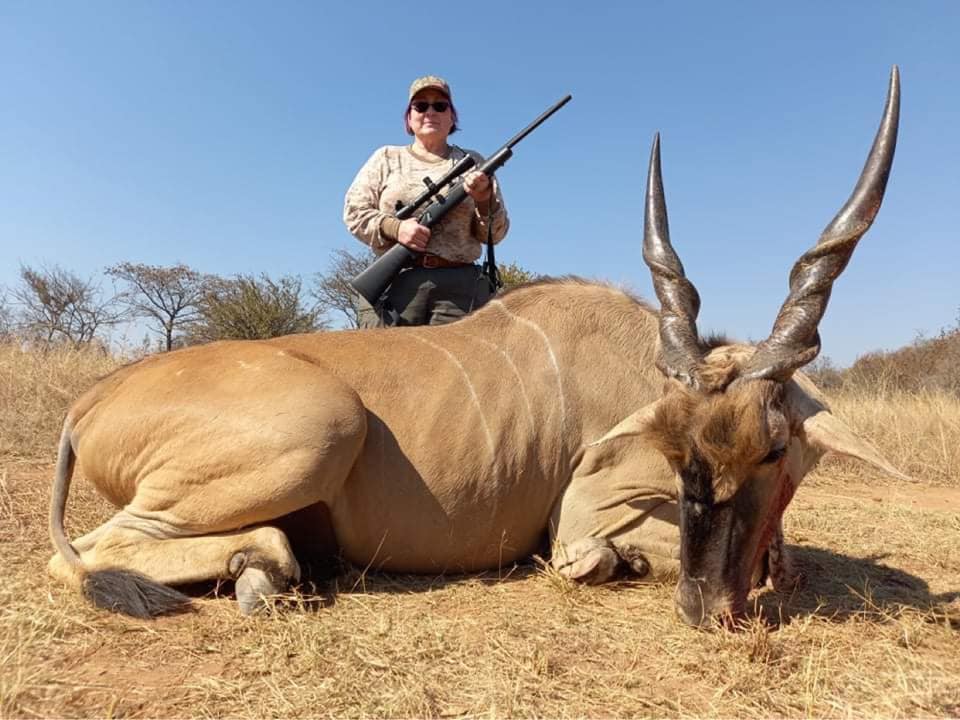 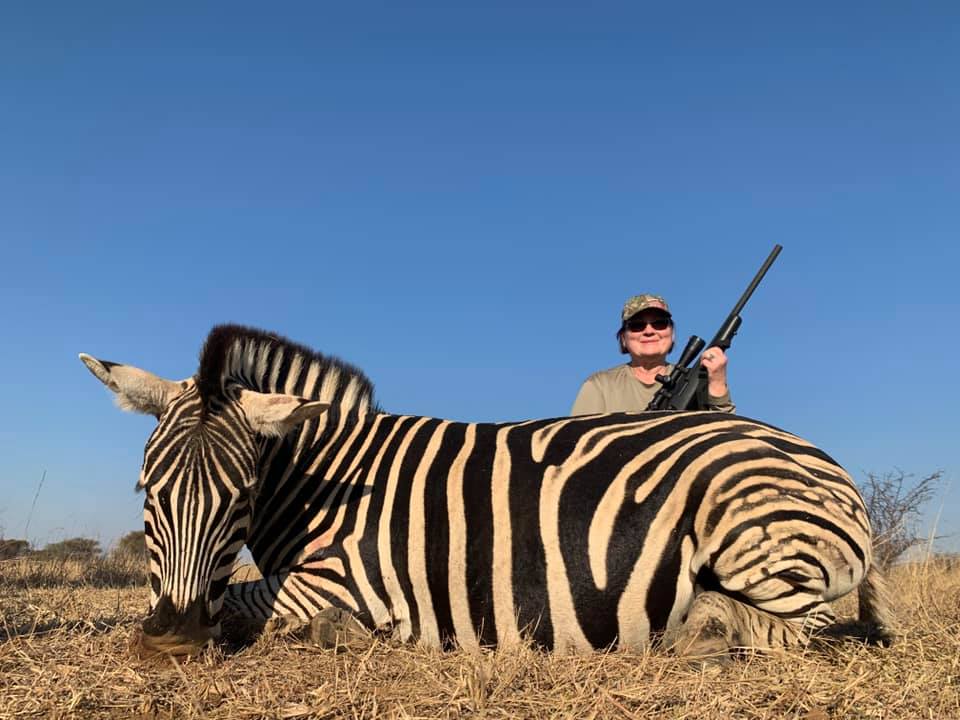 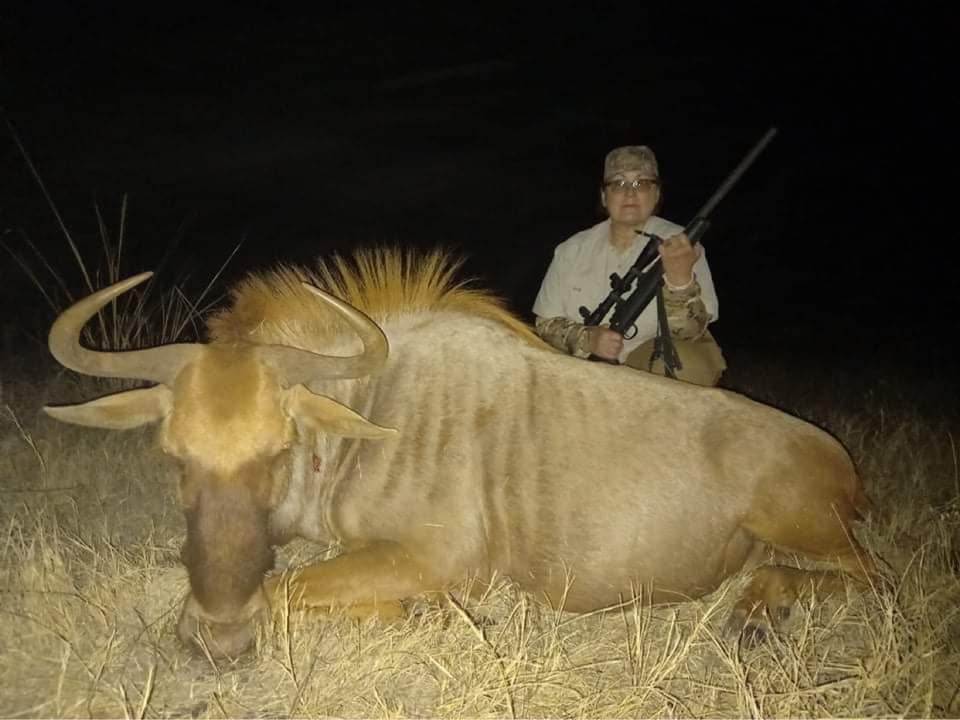 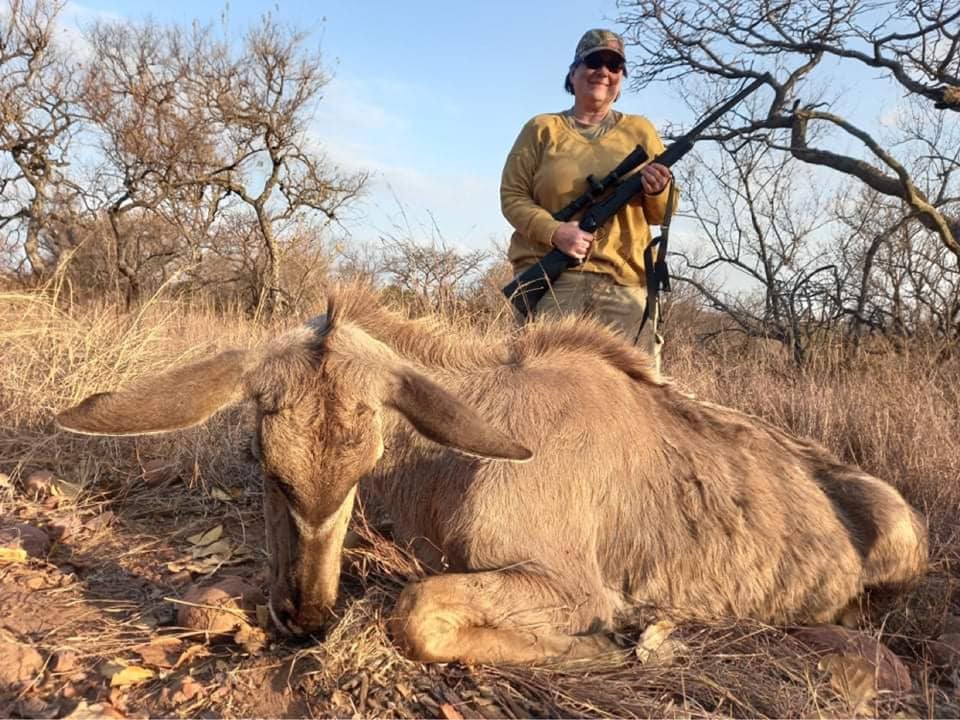 Congratulation! Now the question is…….are you hooked on hunting in Africa!?

Thanks for the report. Congratulations.

Thank you for sharing your hunt, love your sense of humor.
Congratulations on your fantastic hunt!

Congrats on your trip, thanks for sharing

CAustin said:
Congratulation! Now the question is…….are you hooked on hunting in Africa!?
Click to expand...

Thanks for the report and sharing your experience!

Good luck on your next hunt.

Looks like a fun hunt! Thanks for the report!

Sounds like my neighbor had a great time. Congratulations on some very nice trophies. Not surprised that you're already looking forward to your second African safari.
Thanks for sharing.

Well done, congratulations on your successful first safari. Thanks for the report.

Thanks for sharing and congratulations on an excellent hunt @lakeriedog !

Good to hear a report again from NB Safaris.
Nice going!!!
Keep the wind in your face and enjoy your hunt!

Welcome to the club !!
And congratulations for this hunt !

Congrats, it seems like you had a great time and I can see some nice trophies !

Glad you had a good first hunt in Africa! Now when's the second to take place?

@lakeriedog
Thank you for your honesty in reporting.
Most might not mention shooting difficulties.
And your PH team report may encourage other Grannies etc to book a hunt.

Welcome to AH and thanks for posting. What a great safari! That eland is a very fine trophy. Congrats........FWB

PHOENIX PHIL said:
Glad you had a good first hunt in Africa! Now when's the second to take place?
Click to expand...

I’m hoping within the next three years… may have to quit my bingo playing and return to the work force to afford it lol!
"It's my work, he'd say, and I do it for pay
And when it's over I'd just as soon go on my way"
-Bob Dylan

Congrats!!! Looks like you all had a wonderful trip.

Getting the right eye relief and finding the animal in the scope is something that will become second nature with time. I suggest you get a pellet gun and a .22 rifle and spend as much time shooting as possible. Shoot standing, sitting, prone, using trees, walls, rocks, or anything else you can think of as a support.
You must log in or register to reply here.