Just wanted to post shortly some impressions about my once more and again fantastic hunting trip to South Africa in August 2014 again with PH Izak Vos and Vos Safaris.
Once again, after our tremendous bowhunt last year on cape buffalo, waterbuck, bushbuck and wild boar, I was hunting 10 days with my friend and PH Izak Vos from Vos Safaris in South Africa and got magnificient impressions, useful experiences, hide sessions and great stalks.
Many thanks to the amazing experience of my professional hunter Izak I could harvest some outstanding animals and trophies.
A 15 year old giraffe bull of roughly 1.3 tons weight, that the landowner wanted to get hunted, due to the fact that he had killed another bull (seriously no joke) and got laid with his mother and begot two giraffes.
A phenomenal steenbuck, a roughly 12 year old kudu bull, the grandpa of all kudus there and there were many - during one session in the blind we counted 52 kudus at the water and several of them were 54+", a superb eland and an old warthog with some impressive tusks

If someone is interested to hunt with Izak Vos in South Africa he can whether contact me - I am not an agent it is just because Izak and me are friends - or contact Izak Vos directly by email under (izakvos@gmail.com) or on facebook. 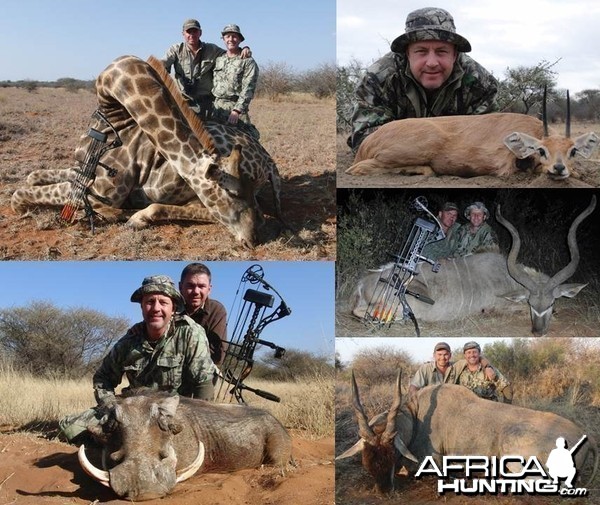 Congrats with some great trophies.
I specially like your Steenbok

Some really great trophies there, congrats!!!

sounds like izak , know his place .
great trophies ,mate
THE HUNTER; The person that pays over 90% of the cost for the presavation and maintance of wildlife and gets zero credit for it ................

Congratulations on your success.
thanks for sharing

Congrats on your hunt. Thanks for sharing your memories and photos.

Thanks guys for the congrats and nice comments.
Very much appreciated.
Always good hunting.

Congratulations on your trophies! Great looking warthog, I had hoped to get a warthog on my first safari, oh well now I have more reason to get back soon. How well did the bow work on your giraffe? That's a big animal and thick-tough hide.

Nice animals....Did you have a minimum draw weight and KE to shoot the giraffe?

Awesome Trophies Nimrod Congrats on a great hunt.
Enjoy Life Now! It has an Expiration Date.
You must log in or register to reply here.