I just got back from an 8 day hunt with Rouan Nel of Tsala Safaris (http://www.tsalasafari.co.za/) in the Limpopo region of South Africa. I arrived in Joburg on July 7 and spent the night in City Lodge at the airport. Rouan's brother Niel met me there the next morning for the 3 hour drive to their property. We ate lunch, checked the rifle and Rouan and I started hunting that afternoon. I told Rouan when I booked the hunt that I really had only two animals on my wish list: sable and nyala. Once I got those two, we would see what else showed up. A cold front arrived ahead of me and it was chilly even in the afternoon. We saw a good sable bull in the middle of the afternoon and began the stalk, but the wind shifted and he was gone. The next morning we spotted another good sable with the same result. Late that day we spotted a good nyala bull and I told Rouan I wanted it. We got off the truck and stalked to within about 80 yards. Rouan put up the sticks. I shot and the bull went down. Rouan got on the radio to call for some help to get the nyala out of the bush for photos before the sun went down.

On day 3 we stalked another sable that Rouan had seen lying down. Due to the bush, there was no shot until we got quite close and the bull ran away before I could shoot. On day 4, we stalked yet another bull and were nearly in position when some francolin flushed, spooking the sable. Late on day 5, Rouan and I were just getting into a blind when Niel called on the radio saying he had spotted an excellent sable. We got back on the truck and drove to the vicinity. We began walking in the direction Niel had indicated until Rouan spotted the bull. He set up the sticks and I shot. However, I shot too quickly and hit the bull too far back. Luckily, he only ran a few steps, and then began walking slowly. The bush was too thick to allow another shot. We were close to the lodge and Rouan got his dogs and rifle. Within moments of putting the Dachshund Espresso on the bull's track, we could hear both the dog and the bull about 50 or 60 yards away. The two bigger hounds Duke and Ranger immediately joined the fray, with us right behind. When we got there, the bull was on his feet and surrounded by the dogs. I rushed another shot and as the bull started to run away, Rouan put him down with his 375. I was glad he did because there were too many people and dogs around and I did not want the bull to get out of sight again.

Days 6 and 7 we continued to hunt, focusing on impala, warthog and blue wildebeest. I told Rouan that the hunt was already a big success in my view and I would shoot another animal only if it were quite good. We spent several hours each day driving and looking for game, and several hours in blinds. We attempted several stalks on impala and wildebeest, but never got in position for a shot. I could have shot several of each from the blind, as well as zebra and waterbuck, with the biggest estimated by Rouan to be a little over 28". I also saw a number of gemsbuck, including some that were quite good. I did not see any kudu bulls on Rouan's property, however he has another nearby farm on which he hunts kudu. I saw one or two mature sable bulls each day I hunted, except the last day. I saw six big nyala bulls, one of which had longer horns than the one I shot and one had heavier horns. I appreciated the fact that Rouan did not pressure me to shoot any more animals. My trophy room is nearly full and I don't need any more horns in the attic.

I had a great hunt with Rouan. The facilities were good, the food was excellent and the people were great. I would not hesitate to hunt with him again. 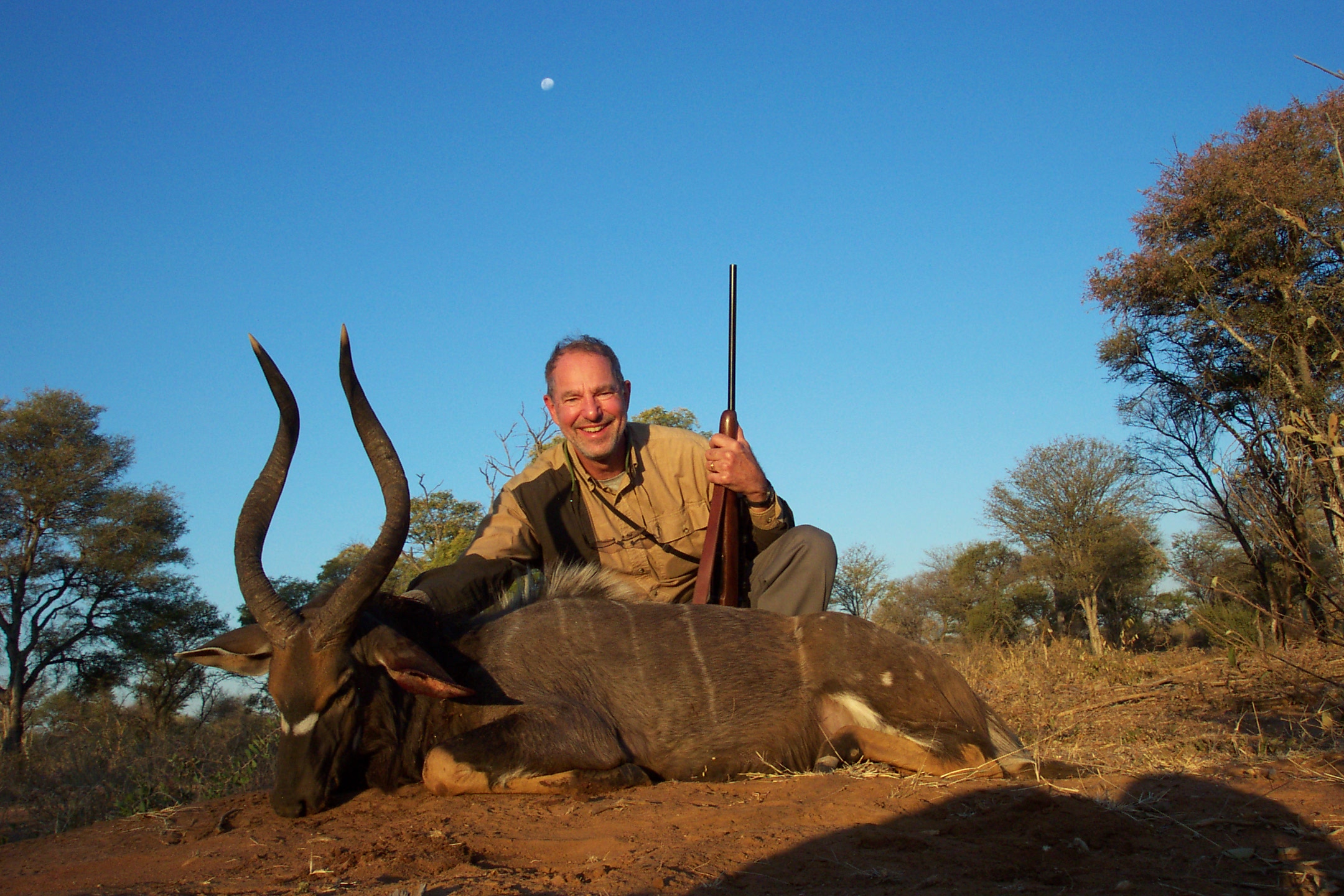 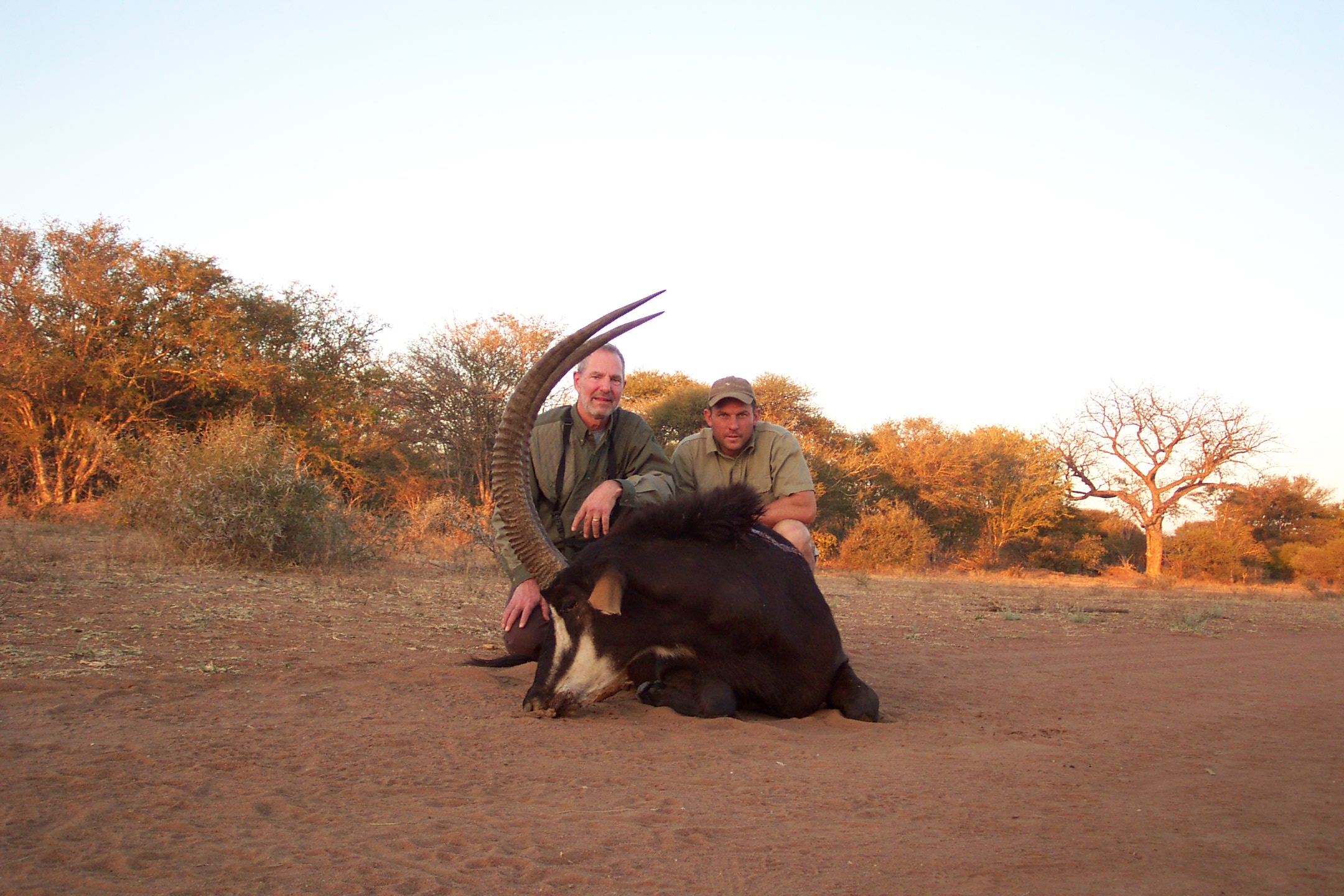 Congratulations on your hunt.
Like that Nyala's shape.
Thanks for the report.

Very well done Brian and thanks for show as those two great trophies......!!!!!!

Great looking trophies sir. How long are the horns on the Sable? Looks like 40+. The Nyala is very nice as well. Congrats.

I did not ask Rouan to measure the sable, but I believe you are right. It is a really nice, old sable with heavy bases.

Thanks for the hunt report! Both are great trophies!

Congratulations on your hunt. Thanks for sharing the report and photos.

Sounds like it was a proper hunt. Good looking trophies. Great addition to your trophy room. Congrats. Bruce

Congrats on those great trophies, and thanks for sharing.

Congrats on your hunt, thanks for posting.
You must log in or register to reply here.