The night after the caracal hunt was just a bit windy as we got ready to head out about dark. We were hoping to do some calling and see if we could be lucky enough to find a Serval. We had only been out about 15 minutes when we began seeing some eyes. A side striped jackal at some distance took notice of our call but didn't come very close so I took a shot. Missed..... We carried on and in no time there were eyes and I was ready after missing once. My PH Garth said he thinks its a Serval! Ok now I am keyed up and really ready. He gets the light on it and is examining it through his binos while I have my Leupold VXR right on it. I could tell it was a mature Serval before he gave the go ahead so bang, big cat down. After the congratulations we head on and in no more than a couple minutes we spot eyes that appear to be a cat of some kind. Garth had told me not to expect an African wildcat and that he had taken people for 10 days and not gotten one. Undeterred I was still hopeful this small cat might cross my path. As the small animal is snaking its way through short grass headed to very tall grass he says it may be an African wildcat. Ruger is off safety at this point and I am on go. It stops and looks back over its shoulder and he says yes it is...bang, little cat down. I said well crap I think I hit it in the head! We get the very large wildcat and thankfully I hit it in the neck and it was all ok. At this point we are really pleased and have done the cat trifecta in one day in the Free State. It is so early we carry on just to see what the night might still have in store for us. In no time at all a Cape Fox shows up and we call it into range. At this point I am taking whatever the night gives me and I make another good shot and take another really neat animal. We round out the night with another porcupine and call it a night. All done in the Free State we make plans to fly to the Eastern Cape. 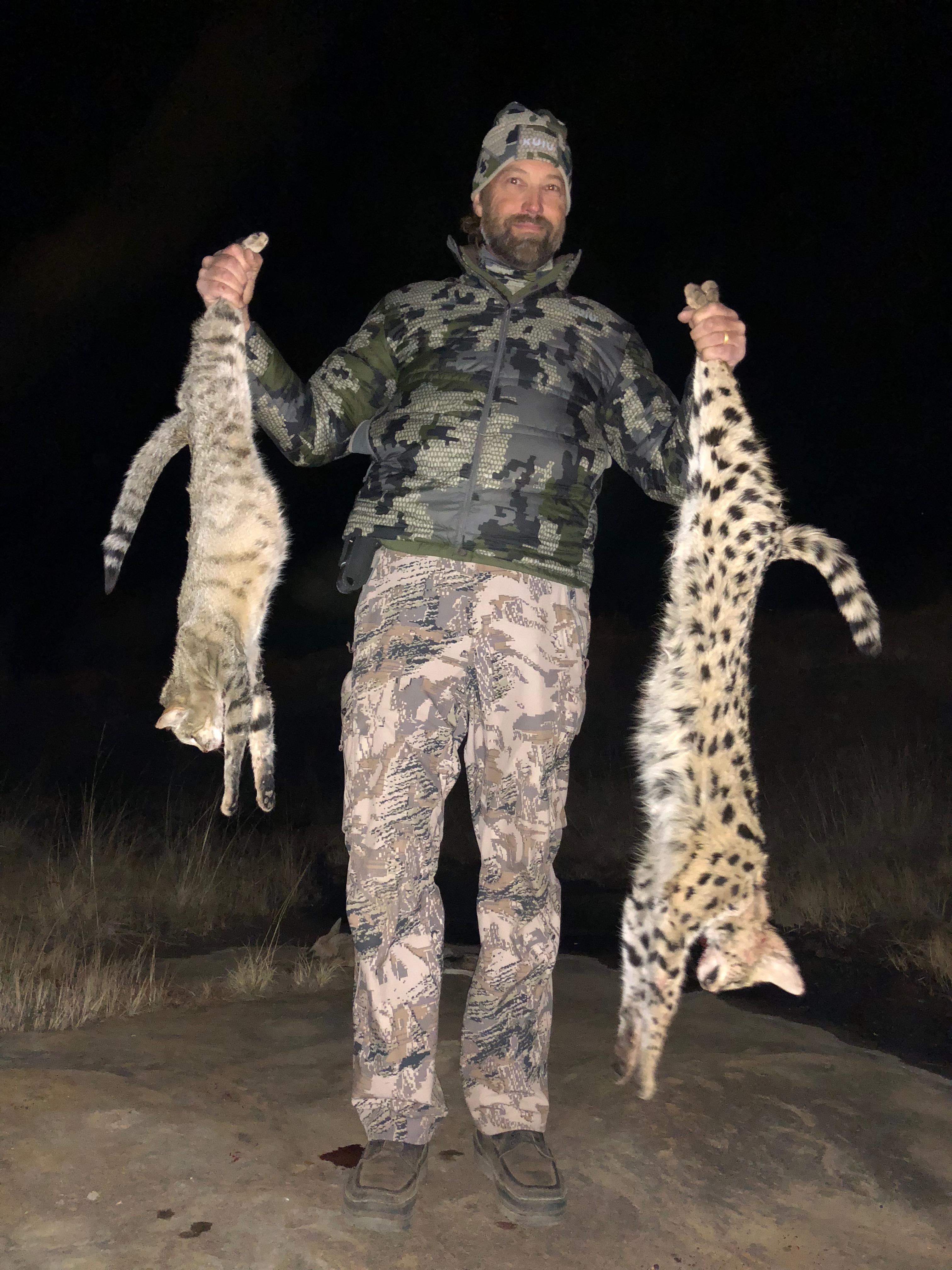 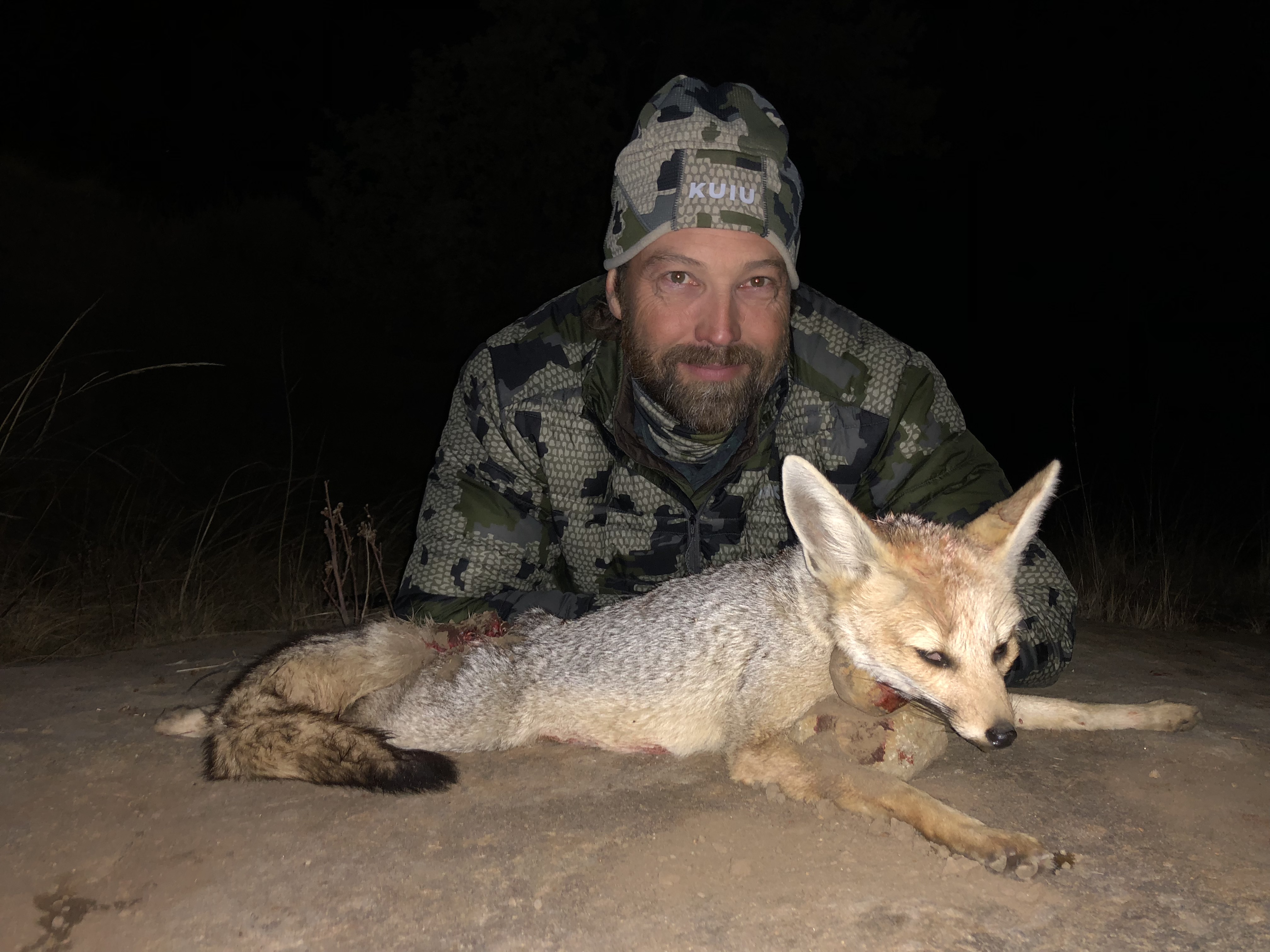 Garth and I flew from JNB to Port Elizabeth and then drove to a place near Jeffreys Bay. This is a beautiful beach and resort town and of course all of the Eastern Cape is really pretty country. We meet the property owner and accomplished PH Toby Cilliers and share many stories. Our plan is to hunt Blue Duiker, Cape Grysbok, and Bat Eared Fox. The weather is very cold and raining. We get everything ready and head out to see if we can find the fox we are after. The rain is still coming down but the forecast looks to be clearing so we are hopeful we can have a good hunt. The rain let up but I was really cold! There are many duikers everywhere we look but grysbok are very hard to find. I have dreamed of hunting a Cape Grysbok since my first safari in 1997 when my friend Greg Simons took one while we were hunting together. We finally spotted a couple grysbok and then both PH's get excited upon finding a trophy male and let me know this is the one. Without hesitation I put the Leupold red dot where it needed to go and a treasure of a trophy is down.
In literally 10 minuted we happen upon a group of at least six bat eared fox and I size up the largest one and squeeze off. We rushed over to find two fox are down, what? Somehow I hit one in front of the big one I was after! Still to this day we have no idea exactly what happened.
The Blue Duiker story is not a happy one and I'll have to return to the beautiful Eastern Cape another day and try again.
I did redeem myself on a hard hunt for Val Rhebok however. We hunted big open country and climbed some steep hills for a couple of days only seeing the white tail puffs going over the next hill. On the last day of my hunt we had seen no animals at all and the sun was going down. As we eased over a small hill we found two Vallies headed for the cultivated fields down below. I just got a very quick shot at the big buck and down he went. As we walked over to him he jumped up and ran and the laid down again. He was up one more time and headed for the hills when the finishing shot had to be made. What a trophy animal!
We decided to drive around after dark and look for a genet cat and we were hoping for some luck as this was it we fly out in the morning. No genet but a wily bush pig was in the farmers field and was dispatched by my 70gr TSX with no problem at all. No it was not a trophy but I got a bush pig and that was enough for me to end this great safari!
I really enjoyed hunting with Legelela Safaris and Reinier and Garth are really good guys and competent PH's. This hunt more that met my expectations and I really hope to hunt with them again someday. 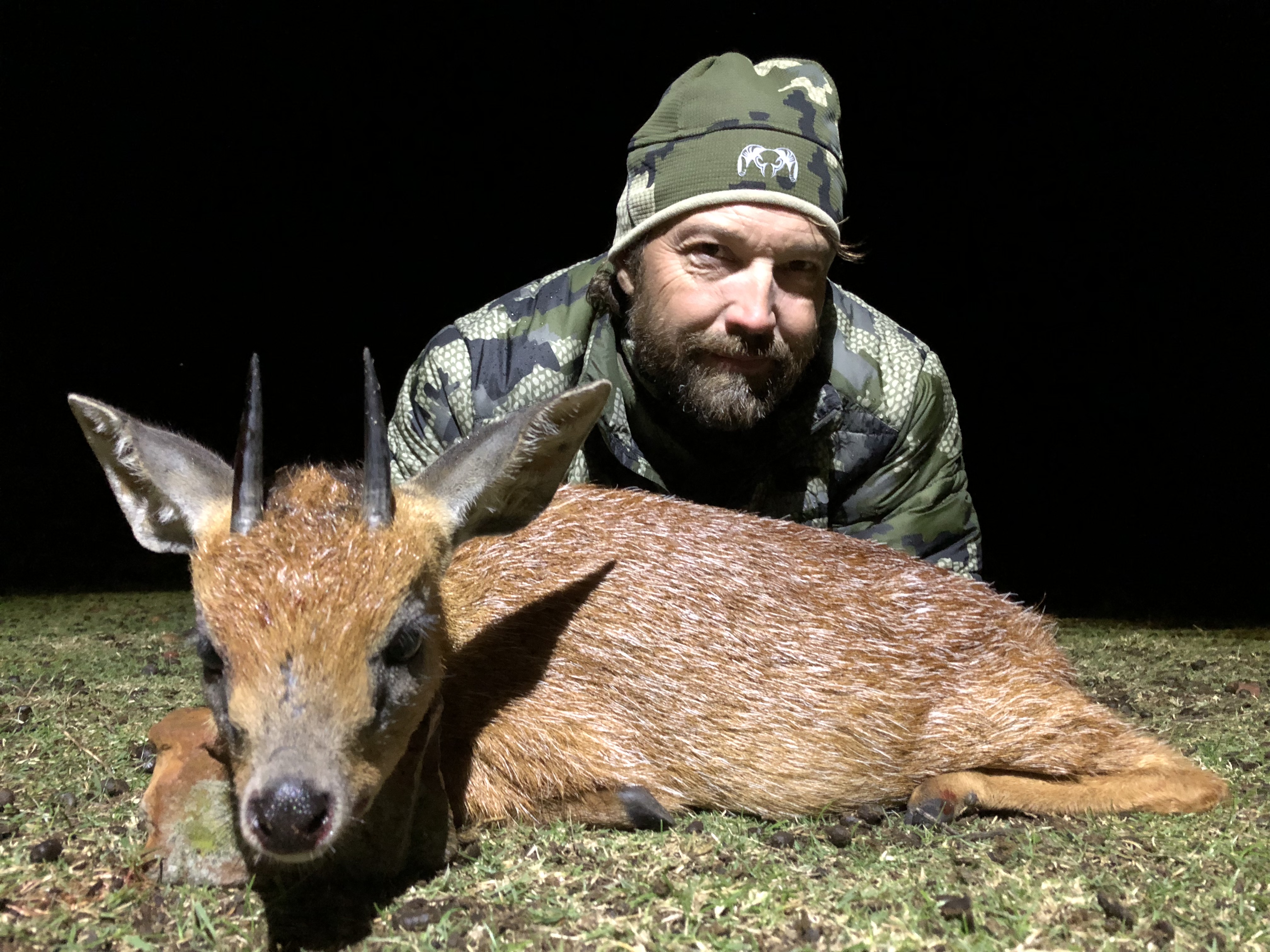 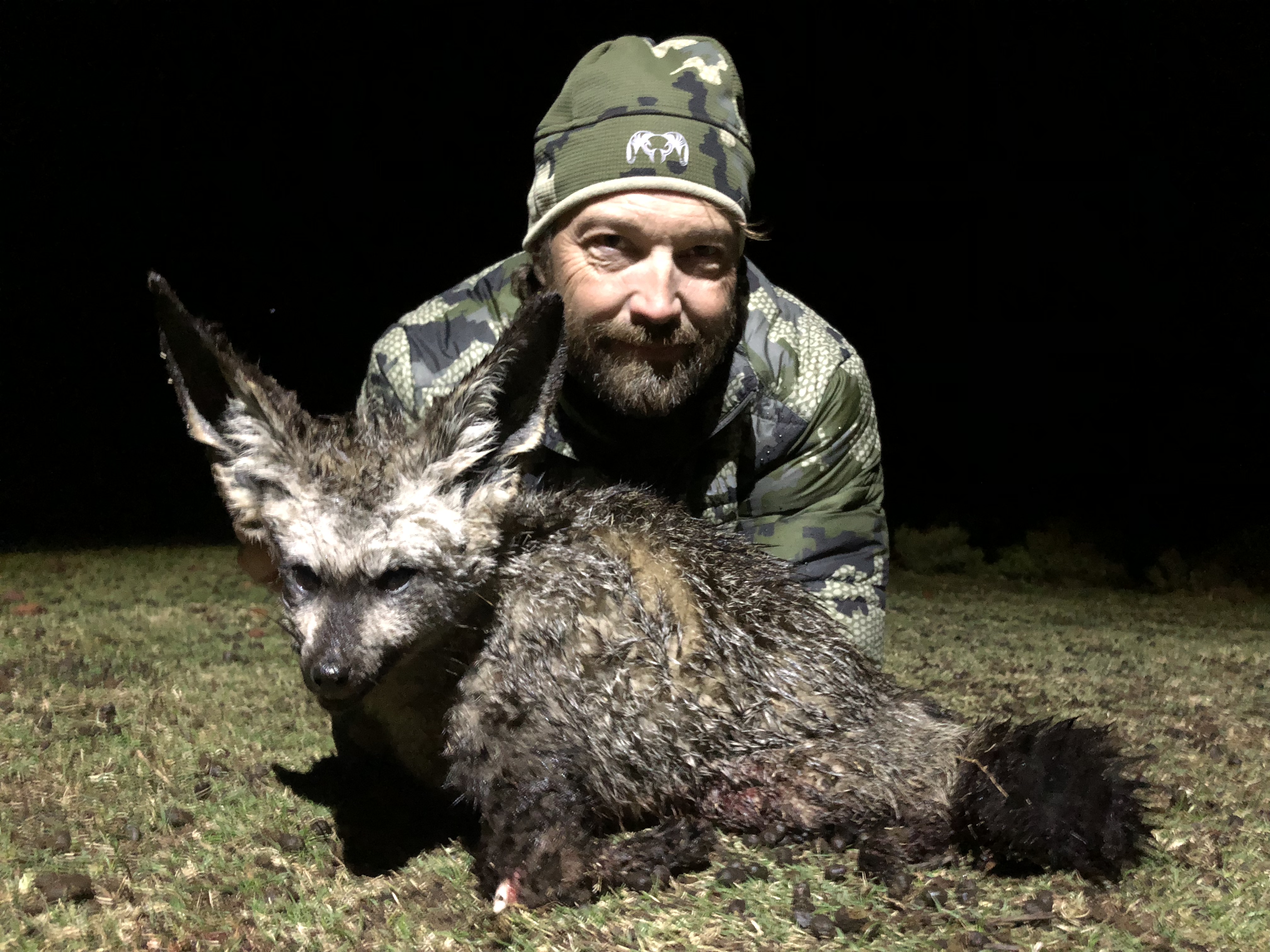 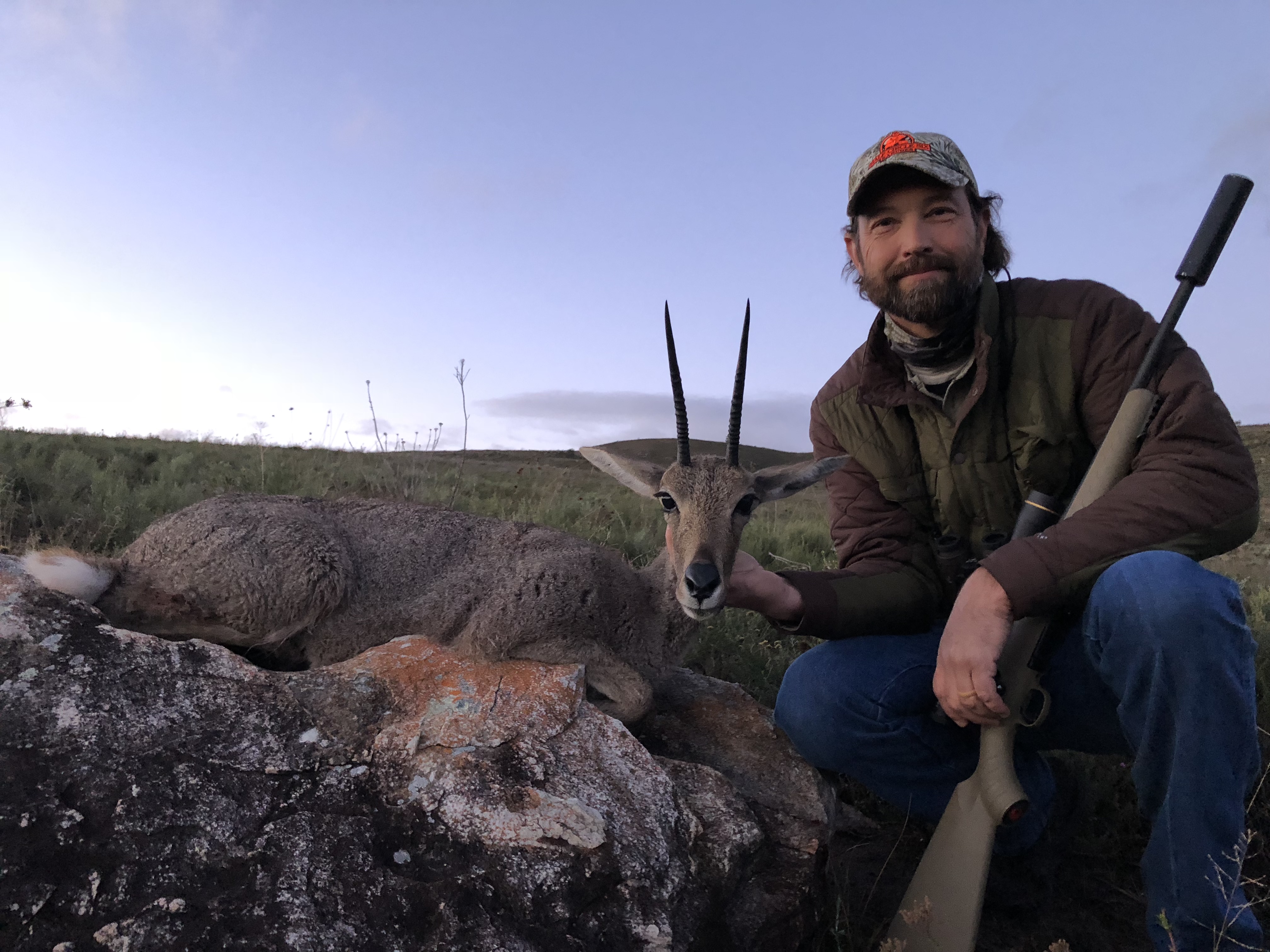 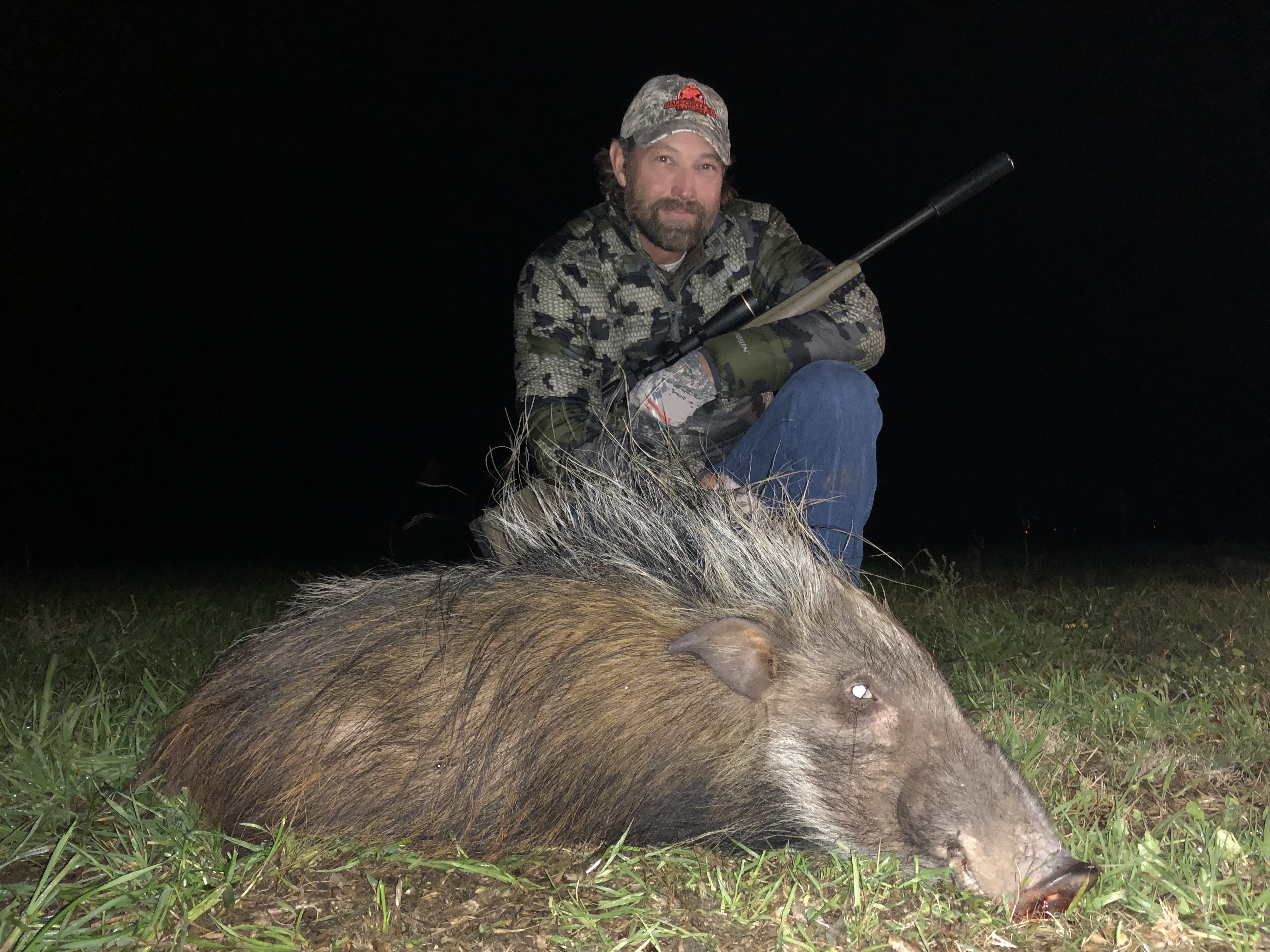 I flew from JNB to Upington and was met by my good friend Pieter. At the airport there were hunters there and many of them recognized me from the film and were so nice to me about my work in Trophy on behalf of hunting and conservation. It is still a real surprise when people recognize me!
Pieter said some Springbok had gotten into one of the lambing pastures near his home and needed to be culled. I said "I am your man!". After some nice Dorper lamb chops, ribs, and a whiskey or two we headed to bed. I secretly could not wait to start the culling project. No pressure, no PH, no trophy fees, no worries! I got a slow start with no rangefinder I sailed a couple bullets over the first ones. Then I found the range and down they went. Two in one shot, a running head shot, and some long for my .223 shots for sure. By 10AM we had 12 down and decided to quit. That is a lot of meat cutting for the next few days. I had a nice time with friends to round out this adventure. I know I am blessed to live this life and I give God thanks daily!
Blessings,
Philip

You certainly were fortunate Philip.
That was a whirl wind hunt.
Congratulations.

Congrats Philip, that was a very interesting hunt !

Congrats on your great hunting adventure! I have a soft spot for those cape grysbok! I need to find a serval, they are stunning!

What a wonderful trip! Thanks for sharing it with us!
Africa on my mind.

Great hunt sir! Congrats on all those cats!

What a fantastic safari. I'm becoming more and more interested in the tiny antelope and night critters. Outstanding, thank you for sharing!

What an awesome hunt, thank you for sharing!

Congrats on an amazing safari! Africa's night critters are definitely my favorite to hunt.

These are challenging hunts, but lots of fun. Congratulations on doing so well in such a short period of time.

Very cool story, I might be hunting some night critters sooner then expected but we will have to see. Your story is definitely giving me the itch! Congratulations!

Great hunt, thanks for sharing! Love the caracal
R

Great night hunts for sure. Congrats!
So how many Tiny ones you have? I am down to Red Duiker, Suni Sharps Grysbok.
I also have a Ardwolf, Caracal, African Wildcat, Bat Eared Fox, Genet.
Get after "EM".
"A Dream can be relived, again and again in Africa."

Looks like you had a fun hunt Phillip. A lot of neat animals. Congratulations.
And here I am, returning to Africa of many faces;.... the sloe-eyed temptress with flowers in her hair who stole my youth and my heart, and left me an old man with a kaleidoscope of conflicting memories of many dashed hopes and some fulfilled dreams. E. Echols

These are challenging hunts, but lots of fun. Congratulations on doing so well in such a short period of time.
Click to expand...

I didn’t get a shot at a Suni. I will have to make a plan!

RogerHeintzman said:
Great night hunts for sure. Congrats!
So how many Tiny ones you have? I am down to Red Duiker, Suni Sharps Grysbok.
I also have a Ardwolf, Caracal, African Wildcat, Bat Eared Fox, Genet.
Get after "EM".
Click to expand...

I have 6 now. It’s tough! I need suni, sharps grysbuck, Oribi, and blue duiker. I am hoping to get the Oribi and blue duiker this year in the EC. I leave July 24th and am counting the days!
You must log in or register to reply here.