I’m not going to post a long review of this hunt. I’m not great at writing and I feel the pictures tell the bulk of the story. I arrived in Port Elizabeth on 10 September 2018. I was met by Marius and we we off to the lodge. On this trip I was after Blue Wildebeest, Bush Pig, Blesbok and Red Hartebeest. The weather was cool and quite windy while I was there. We found a lone Blue bull on a massive property and came up with a plan. It was quite a walk and then a long wait huddled behind shin brush until we were presented with a shot. 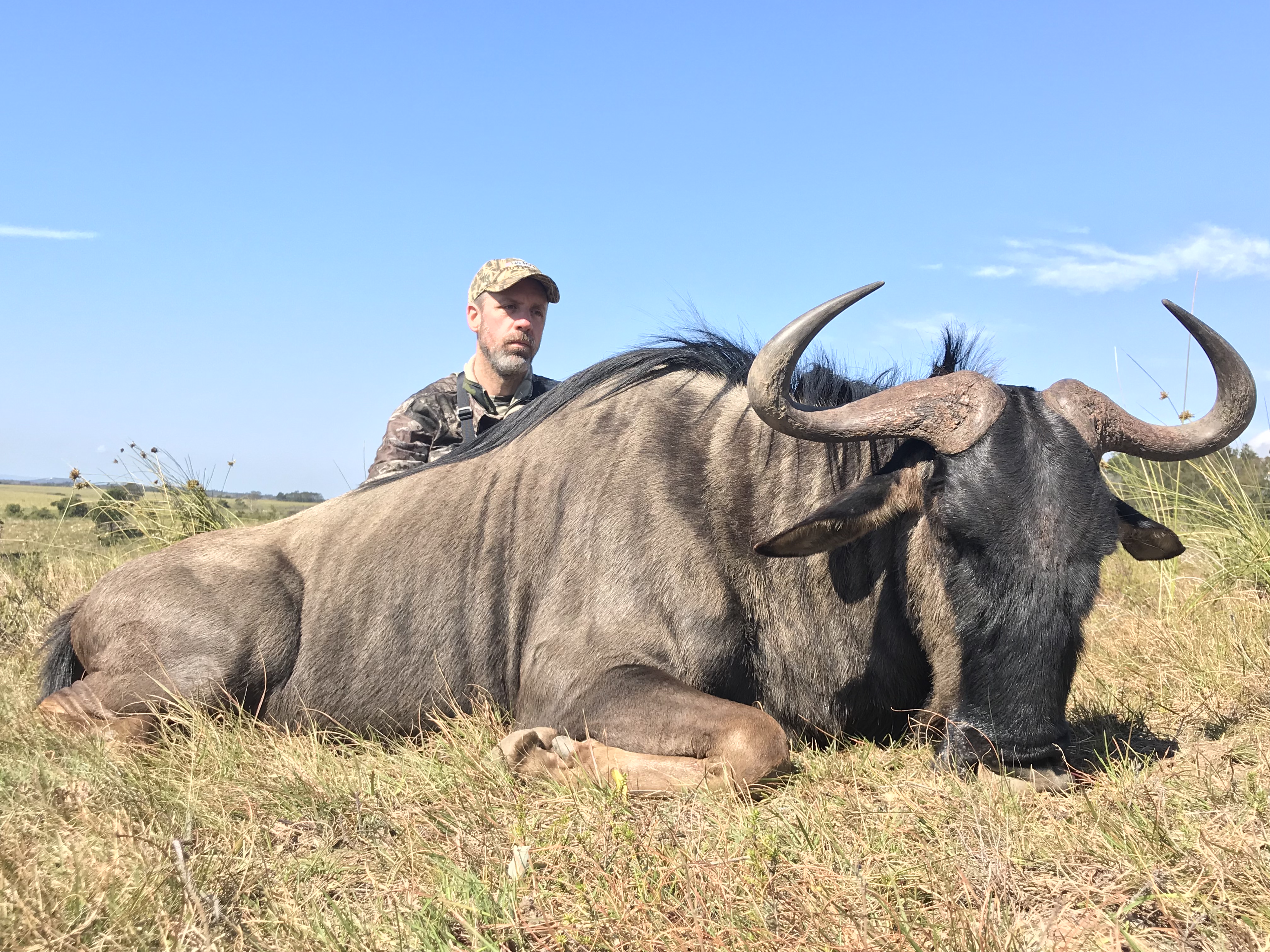 Next up was Blesbok. Today we hunted on the farm where the lodge was located. We were able to find some Blesbok and after a bit of a stalk I took a shot and pulled it badly. I managed to hit the animal on offside front leg. We ran after him and I missed the second shot. We turned the dogs loose and they found him. We kept running, well Marius was running. I’m not much of a runner. We did find the animal bayed up under a tree and dispatched him. 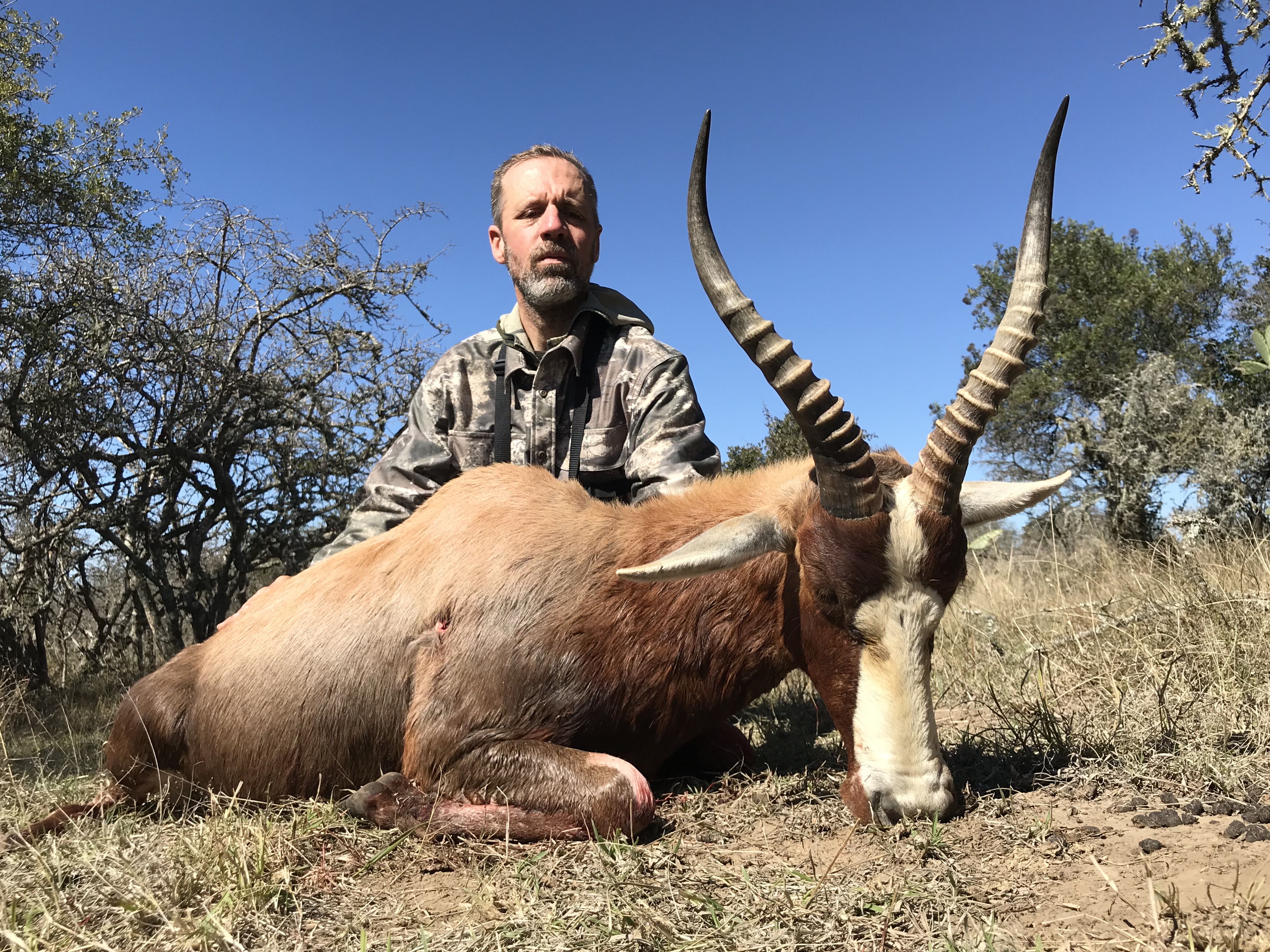 Now the Bushpig turned into quite an ordeal. Marius had one coming into his bait, but it was not a great pig. So, Marius calls around and we come up with his sixth plan which is 2 1/2 hours away. We make the drive and arrive at dark and proceed to have a BBQ in a pasture with the pig whisperer. This guy was obsessed. He has4 baits going and cellular cameras at each site. He tells us time to go and we head off to another cow pasture. We get a message from the camera and it’s go time. After an adventurous barefooted stalk in the dark thru the woods, we see the pig. Time to put the night vision to work. 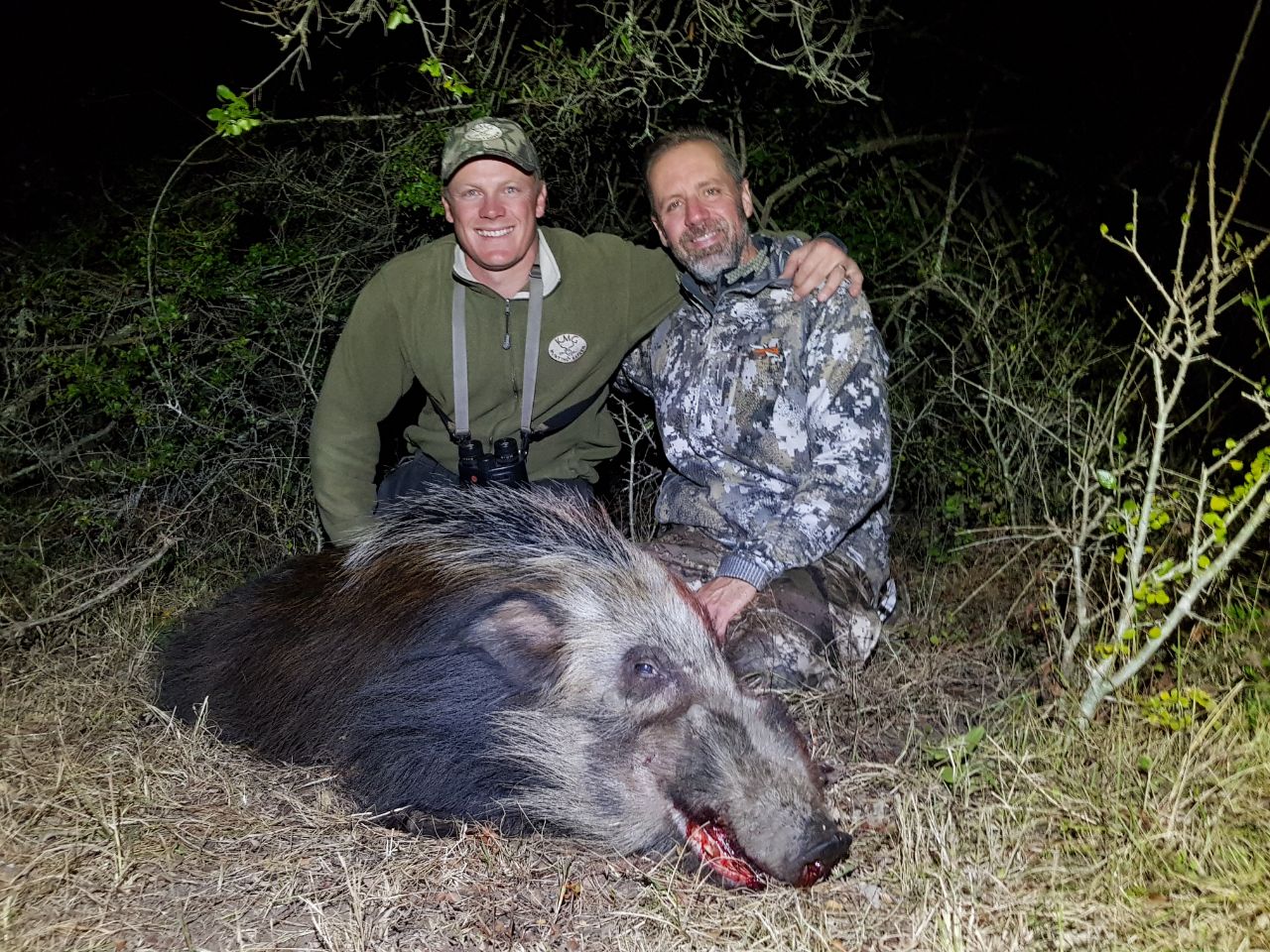 This pig hunt was so much fun and quite the rush. I highly recommend it to everyone. Marius went above and beyond to secure this hunt for me and I am forever grateful. I believe you would be hard pressed to find a PH that would work harder. I’m a client for life.
The last animal we went after was a Red Hartebeest. We went to a property that another PH was able to arrange for us. So the 3 of us take off to get up high so we can get a better look at the farm. We don’t go far and we are hitting the deck. The boys spotted a boss of a Hartebeest off to the right and up the hill. We scramble behind a bush and Marius and Patrick evaluate the situation. Marius slowly put the sticks up to the left of the bush and I get settled. Marius makes sure I’m in the right animal and I shoot and he drops in his track. 180 yards and a fragment went thru the spine. 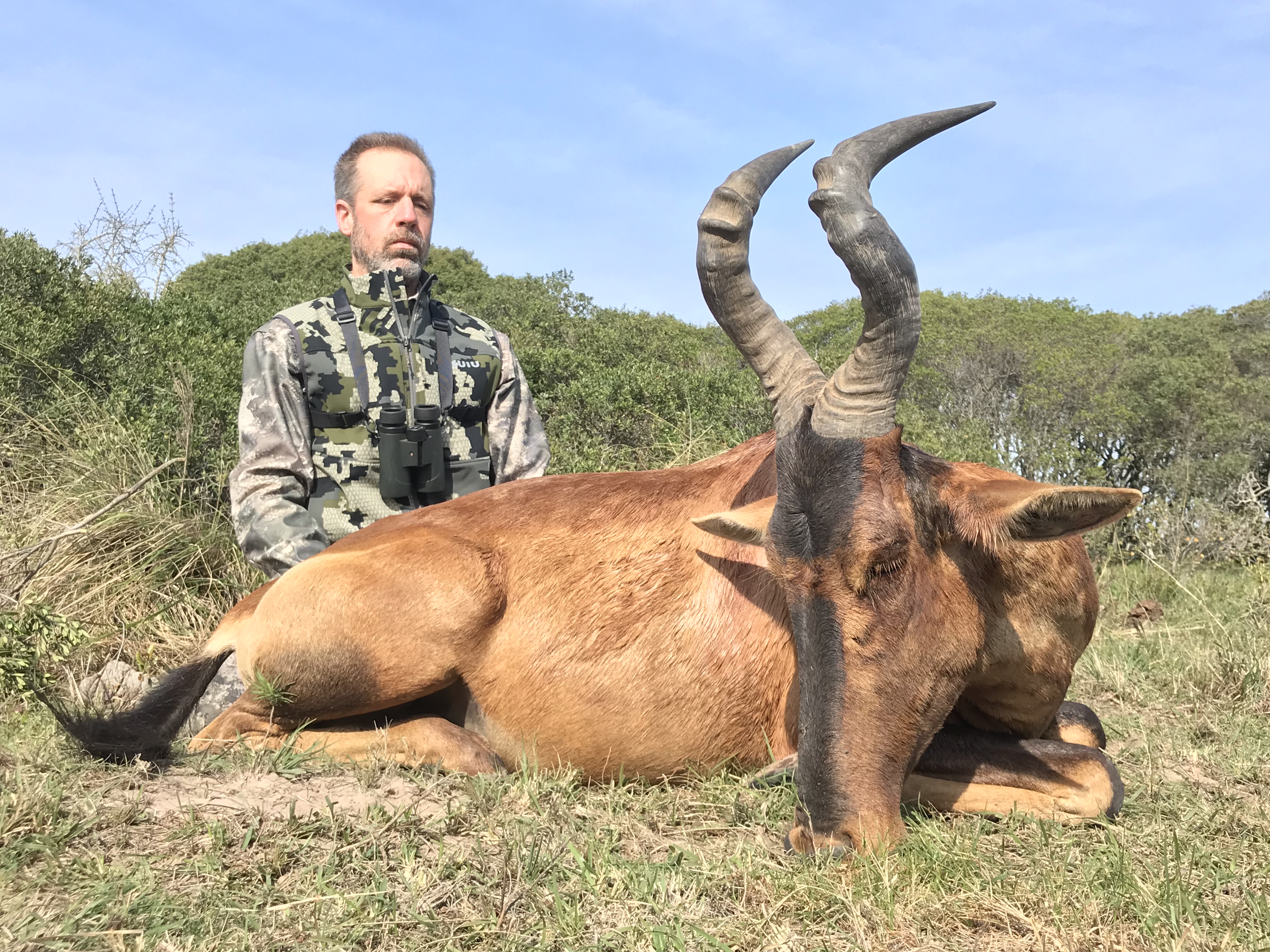 Once again KMG and Marius delivered. Don’t wait any longer. Get your safari booked with KMG now!!!! If you have any questions or want more detailed information please feel free to contact me.

Really top notch trophies! Like you, if I ever get back to South Africa, it will be with @KMG Hunting Safaris !
"I don't need to shoot farther...I need to hunt closer." - G. Sitton

Congrats on some nice trophies.

It was wild. I thought Marius was pulling my leg at first, but he was dead serious. Had to send the other guy back to retrieve our boots after we got the pig down.

My first thought was how many thorns did you step on during the barefoot stalk? Congrats on some nice trophies.
Bruce

gillettehunter said:
My first thought was how many thorns did you step on during the barefoot stalk? Congrats on some nice trophies.
Bruce
Click to expand...

A few thorns but not too bad.

Congrats on the trophies and thanks for sharing!
John 3:16

Congrats to all. Marius and the crew do a great job.
Tommorow is promised to no one. Go live your dreams.

Congrats, nice trophies and seems like you had a great time !
You must log in or register to reply here.