I'm not a very good writter, but will try my best to give a running review as things unfold.

Prehunt:
Bad news first, my hunt buddy who was supposed to be here did not make it. He was denied boarding at Zurich airport. THis as he didn't have a visa to SA. The European hunt consultant (not the camp owner/operator) informed him he did not need a visa, when evidently he did.
So let this be a lesson to all, don't take anybody's word for anything, double check yourself.

Travel:
The Zurich/Johannesburg flight was uneventful, popped some sleeping pills and slept almost 6hrs of the 10hour flight.
Baggage arrived OK, weapons clearance was fine, but a bit slow. I hired a car to take me from Johannesburg to the camp. Drive was about 5.5hours.

The Camp:
The camp is really a 5 star luxury resort. Everything is great, friendly staff who go out of their way to assist. Delicious food. Impecable living quarters. Large villas with grass roofs. Lounge chairs overlooking the river and the swimming pool. Wifi covering most of the camp. But still with a rustic bush feel. 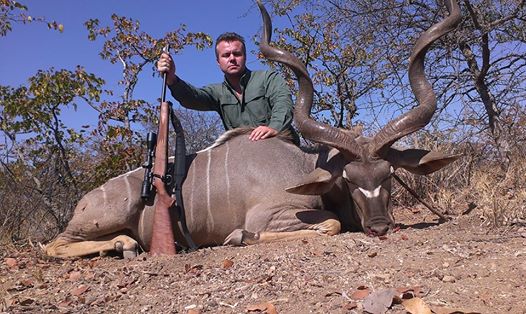 Wake up call at five AM by the staff in the form of a knock on the door and a nice glass of fresh orange juice. Followed by a nice hearty breakfast of eggs, bacon and toast.
Started hunting at six AM. Now I need to say that I had been put off a bit of plains game hunts in SA by a bunch Youtube videos. You know the ones where they drive the hunters up next to the animal in the landcruiser and the 'hunter' shoots the beasts from the truck, all in a small pen.
Well I'm happy to say that this place has nothing to do with that.
First off, the place is huge! I think something close to 50000 hectars (thats hectare, not acres!). With 2000km of interior roads. I think some small countries might have less that...
The camps ethical rules are strictly enforced, no shooting from the cars!!!

First animal we spotted was a bull Oryx, we tried stalking him, but he gave us the slip in thick cover. We bumped into a huge wildebeast at 50 yards. I passed on him, as he wasn't on my list...just not a big fan of them as of yet. But that might change.

Furtherone bumped into a VERY nice Kudu bull. He had very deep spirals and a wide spread. But same story, he gave us the slip too.
Coming back from this stalk, or it might have been the next one, I spotted a Warthog looking straight at me, about 80/90 yards out. He also wasnt' on the menu, but the PH said it was a big pig(the one on my avatar), so I decided to take him. Had to wait a good while for him to turn broadside and stop. I took him off the sticks with my SIG SHR 970 in 7mm Remington Magnum. The handloaded 160gr Speer deep curl bullet hit him right behind the shoulder and exited in the same spot on the off side. At the shot he took off on a 50 yard death sprint, stumbling a couple times on the way before finally cartwheeling into a bush and expiring quickly.
After loading get some photos and loading the pig, we stumbled into a herd of Zebra. We split them in two, with each half going in seperate directions.
We followed one half of maybe 6 animals that were always obstructed by brush. They soon started calling to each other to regroup, and we were able to watch as they met up again.
I finally had a shot on decent one, but decided to pass as it wasn't exactly what i was looking for. I would like to get one with very striking white and black stripes. This one seemed a bit off white. They finally faded off and we hiked back to the truck to go back to camp for lunch.
Lunch was Nyala lasagna. It was to die for. After that I had a dip in the pool and layed out for a nap on the lounge chair. It was great.

The afternoon we put a stalk on another very nice Kudu bull. Not quite as nice as the first one. He had a wider spread, but his spirals were not as deep. Anyways, he winded us and huffed at us. Surely his way of telling us to get lost!
He came across a black rhino. Apparently they are very aggressive, so the PH had me climb up a tree, just in case. But the rhino didn't come in any closer.
Later one we tried to catch up to Oryx, but when we finally did, we saw they were two females and I only want a male. So passed on them and back to camp.
My first day now ends with me typing this by the camp fire.

spike.t said:
shame about your friend. what country is his passport issued in?
Click to expand...

Congratulations.
Sad news for your buddy and some good advice about double checking advice on Visa requirements.

What a bummer for your friend, but a great start for you!

Ten days until wheels up for me... come on clock, hurry....
HUNTERS make importation bans work!

Day 2:
Woke up at 5am. Left camp at 6, started hunting at 6.30am
Put a stalk on a bull Oryx. He was in a clump of trees ahead of us. We tried to go around the bushes to get a shot, but ended up getting busted a by a couple of imapala that we didn't see. They let out a loud wheeze and the Oryx took off like a bullet 30 yards from us.

Drove out to a long ridge and line overlookng a valley and paralel ridge, climbed up to the top of and started glassing. Didn't see much oif anything at first. Then after a while a bull Nyala appeared. Then a Kudu bull (too small), then a couple of Gemsbok. THey all seamed to be grazing in the same direction. I wanted to move down and ambush one of the Oryx bulls when he passed within range. The PH said we should check other side of the ridge, so we climbed over and started glassing. Immediately saw two Kudu bulls. A small one and a very nice one. I decided i wanted to take him. PH called it right at 200meters. I got on the sticks and placed the crosshairs of the Zeiss on the 7mm Rem Mag, on his chest. Despite some buck fever i was able to land the shot tight behind the in the lower half of the chest. As he was quartering sharply away, this was a bit further forward than I would have liked. And since i was shooting at a steep downhill angle a bit lowerd than i would have like also.
At the shot kudu exploded from almost behind every bush, and were gone within seconds. We got to the point where mine had stood when i shot, and nothing. NOt a drop of blood. We immediately took up the track and within 50meters we jumped a Kudu. Figuring that an unwounded animal would not bed so close to where a shot was fired, we knew it was him. We followed him another 50 or so meters (still not a drop of blood anywhere) and saw him standing under a tree, swaying. I put another two rounds into him and he dropped. Walking up, he again tried to get up, so put one at point blank through the shoulders.
I assisted the skinners butchering him, and the first shot, even though a bit low and forward, was deadly. It cut some major blood vessels, as there was massive internal bleeding. But since no exit hole, no blood trail (exiting bullet are a good thing i guess). Had the bullet exited, there would have been a massive blood trail.
All four 160gr Speer Deep curls were found just under the skin on the opposite side, well expanded and well intact.

congratulations reaper,great start mate
THE HUNTER; The person that pays over 90% of the cost for the presavation and maintance of wildlife and gets zero credit for it ................

Very nice Kudu. Congratulations.
I have to agree those exit holes might just be more benefit than I ever thought before to.

Let camp at about 3pm after a nice lunch and a dip in the swimming pool.
Tried a couple of stalk on some Oryx but got busted each time. Were either winded or seen by the shap eyed beasts.
Last stalk of the night was on a group of maybe 20 Oryx. Both males and females. It seemed as the rut was on as the males were chasing the cows. They were in a little medow which was surrounded on all side by a fairly thick screen of brush which made getting a shot next to impossible. Also identifing a bull was very difficult.
After almost an hour we were able to tip toe to within 50 meters of them. However the brush prevented almost all shots. So we danced left and right trying to get a shooting lane throught the brush at the constantly moving bulls.
After about a half an hour of this one came closer, into the the clear and gave a broadside presentation. A quick look at his underbelly confirmed it was a male.
A very quickly settled the cross hairs on the Zeiss conquest 3x9 tight behind his leg in the lower chest region and let one fly. At the shot he turned around and took of in the other direction. I quicky racked the bolt on the Zastava Interarms K98 in .30-06.
My bull was clear of the herd and running behind a light screen of brush. I swung the rifle like a shotgun and touched off another.
He was broadside but angling away. The 180gr Winchester power point caught him at the last rib and angled forward through the vitals comming to rest under the skin in the offside shoulder area.
He ran another 30 yards and dropped.
The generic Winchester Power point cup and core bullets (retailing for 20 dollars a box) did a great job. Both bullets were nicely expanded and retained a good amount of weight (haven't weighed them, but estimate around 70pct) and peneterated to the offside hide even on angled raking shots.

all sounds good so far Reaper, looking forward to the rest of the report

Yep. They arn't sexy bullets. No polytippedboattailpartitionbondedcoppercore, but they sure get the job done. I had considered going with something more premium. But my my rifle was already tuned for these, and I figured that the .30-06 with standard cup and core bullets was probably responsible for more elk kills than any other cartridge/bullet combo. So figured it would be fine for PG. This evening, I'll try to post un update on them and the hunt.

Reaper said:
Yep. They arn't sexy bullets. No polytippedboattailpartitionbondedcoppercore, but they sure get the job done. mbo.
Click to expand...