This report has been a long time coming. I was not sure if I was going to post, but this website has been and still is such an incredible resource to me. I figured the least I could do would be to give some stories in the off season.

My father and I went to hunt with Cruiser Safaris in July. He hunted with a bow and on occasion a .375. I hunted with a rifle for the duration of my safari and shot a 30-06.

This is in the Limpopo Providence of South Africa.

We have great things to say about Cruiser Safaris. I would not hesitate to recommend them. The food and lodging was great and we were very well taken care of.

Two hunts stand out to me, the first was the very first morning we had been walking for a few hours. We were in pretty thick cover and eased up on a group of Blesbuck. There was only one hole and path to shoot in and we kept waiting for a large male to cross. As we were watching out of the corner of my eye, I saw a wart hog. He told me if I saw a big one I would know. Well, I knew he was big. I eased the rifle on him and Hans my PH said he was a good one. He walked straight at us from about 80 yards out. At 15 yards he turned broadside. Still not being use to the rented gun, I only had the safety at it's midpoint. He saw me flinch as I tried to pull the trigger and took off. He stuck back out around 100 yards jogging and that was it with the safety now successfully turned off.

The next hunt was for my gemsbok. We had walked and walked and hunted hard for about two days. One afternoon, we had been following a group for quite some time. We spooked a heard of Zebra we didn't see and thought it was over. We hurried on the track and eventually my PH stopped. I could hear the noise he could. To me, it sounded like whitetail deer fighting. It ended up being a gem buck coming through the bushes rubbing his horns. I was sitting on the ground. He came out at about 10 paces and had no clue we were there. I watched as his horns came into the scope and he stayed just out of sight behind a tree before stepping into my crosshairs. I will never forget watching his horns go through that brush and how close we were to him. By far my favorite shot of the trip.

A favorite story from my father was his first morning in a bow blind. 5 shooter kudus came straight in. He was in a pit dug into the ground. He said he had watched video after video, and still nothing could compare to looking up out of that pit at a kudu bull. He picked his favorite out of the group and smoked him. The bull went about 40 yards and they could see his horns from where he piled up. They gave him awhile and headed to recover. As they went, the bull stood up. 15 yards and dad sent another straight through him. The bull stood for about five minutes looking at them with blood pumping before falling over. Nothing quite like getting to arrow your bull twice.

It was a great trip. There is no question that Africa gets into your blood bad. We are already planning and dreaming of when we can return. 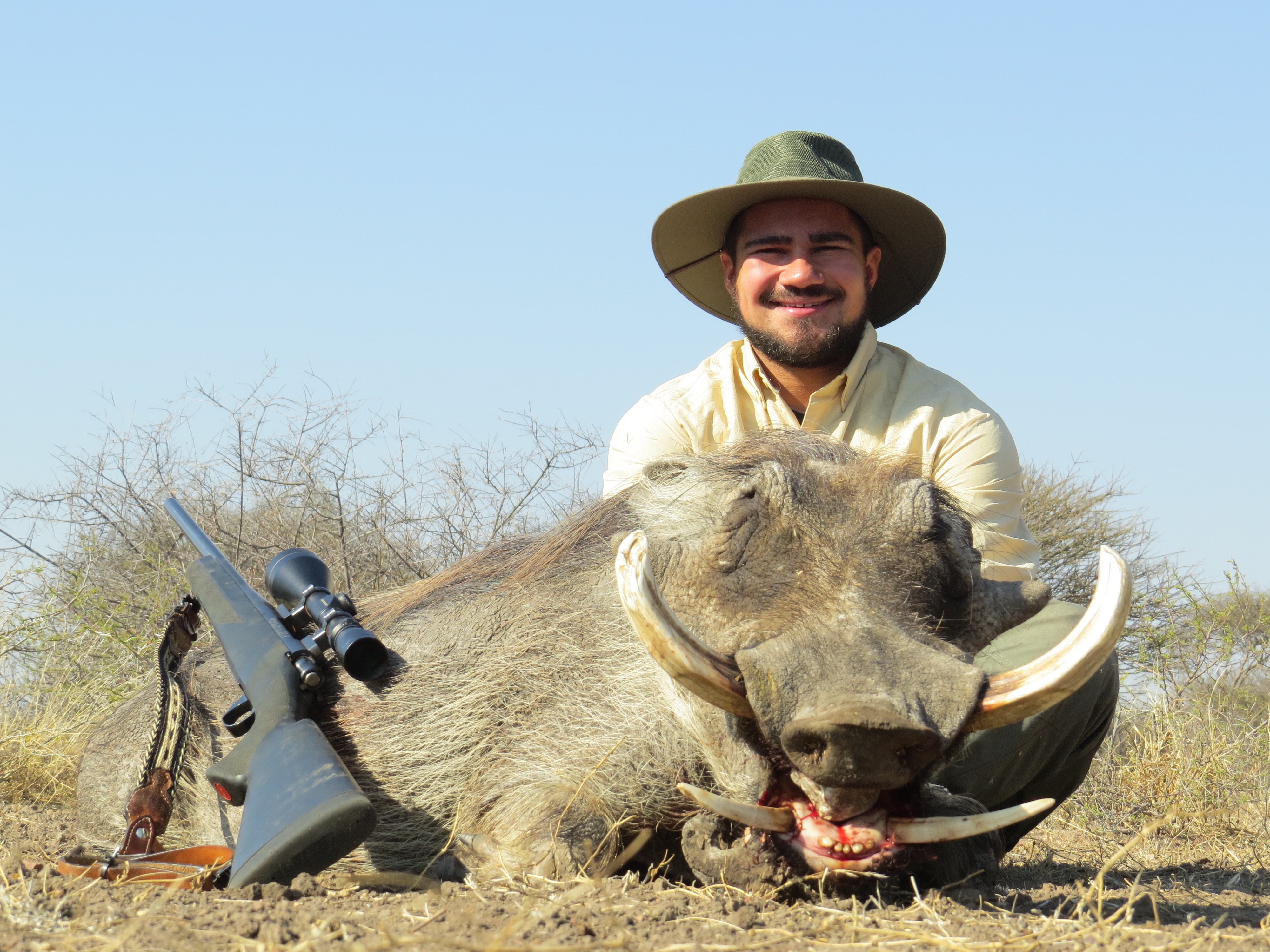 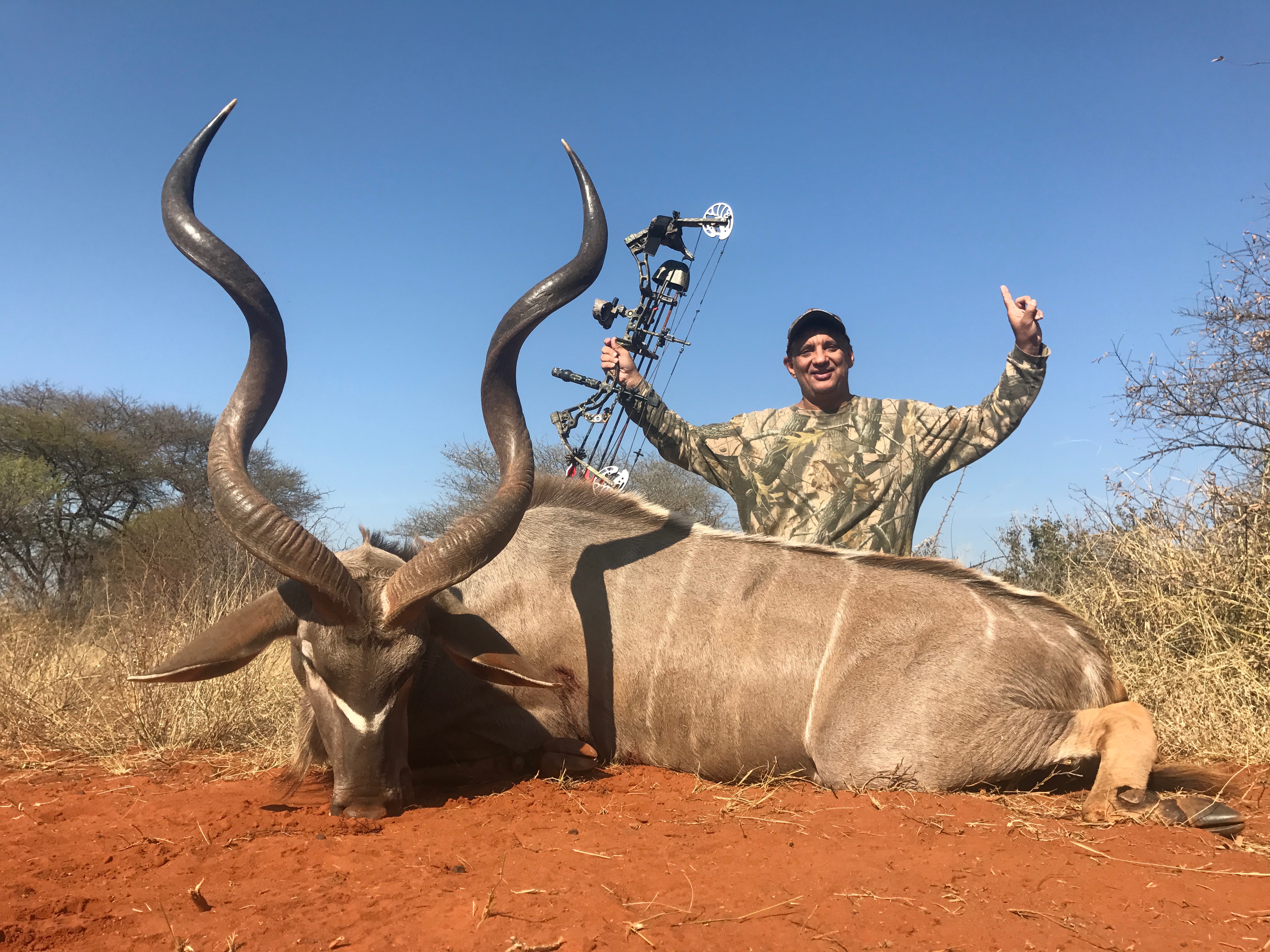 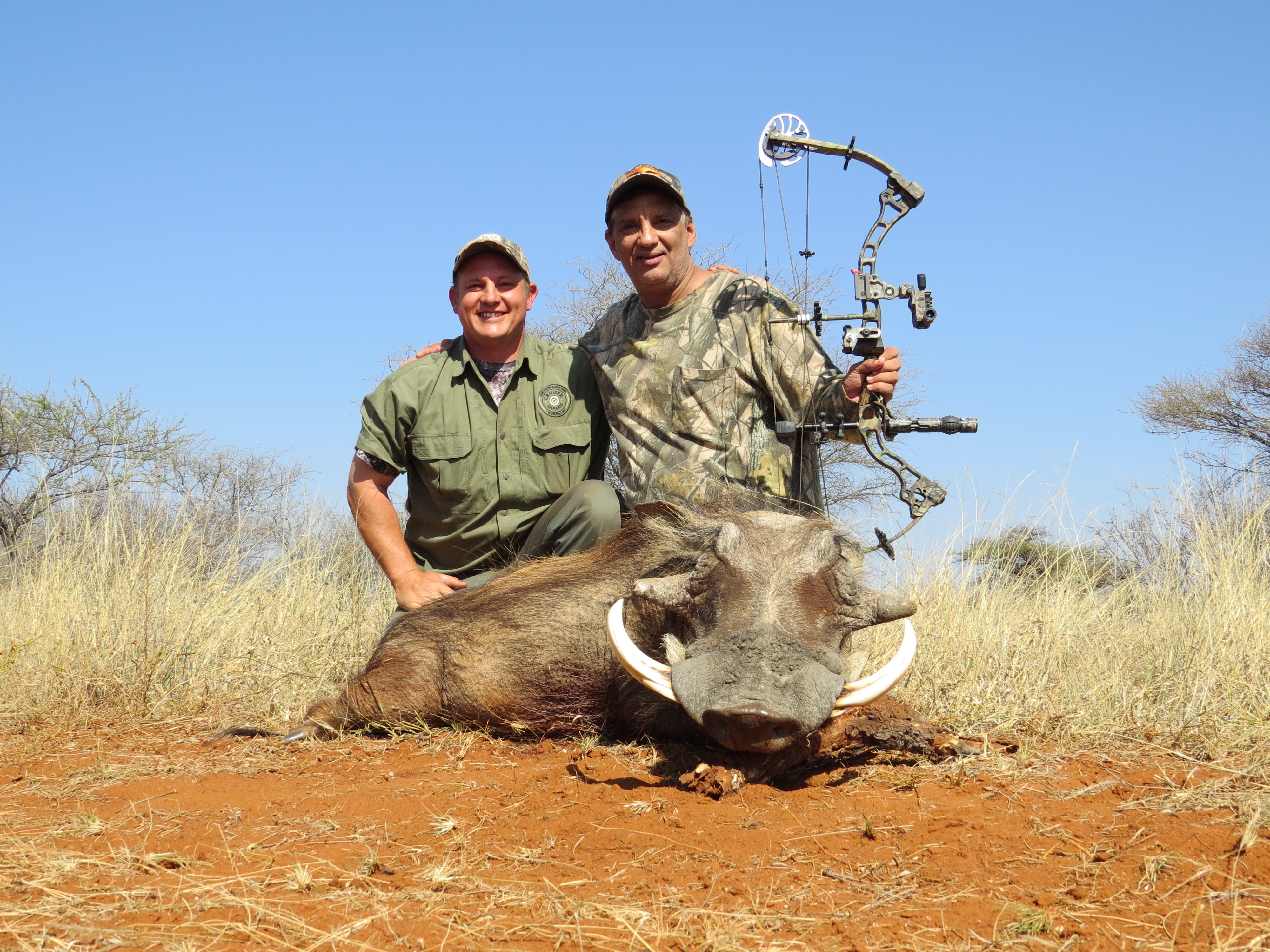 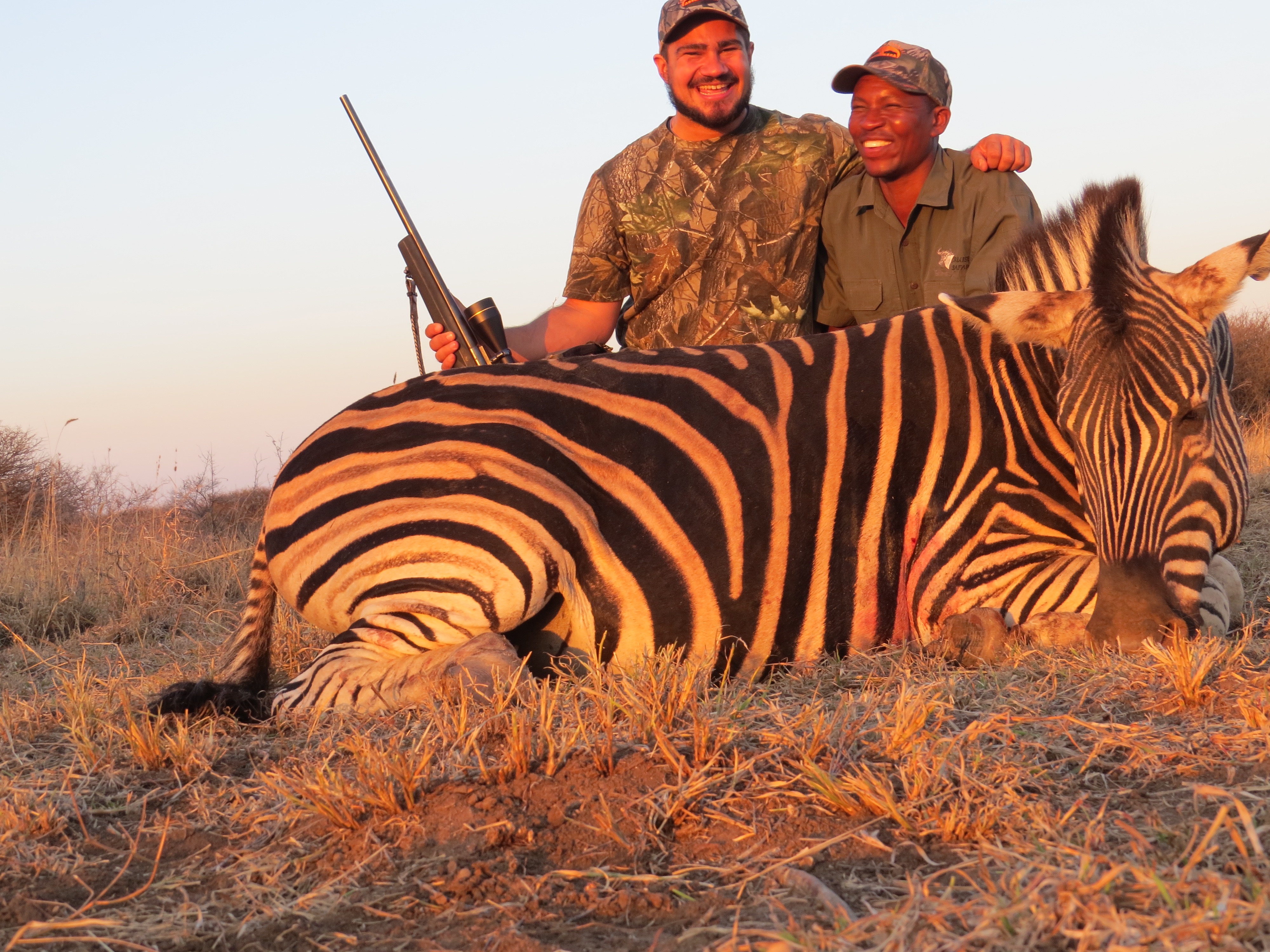 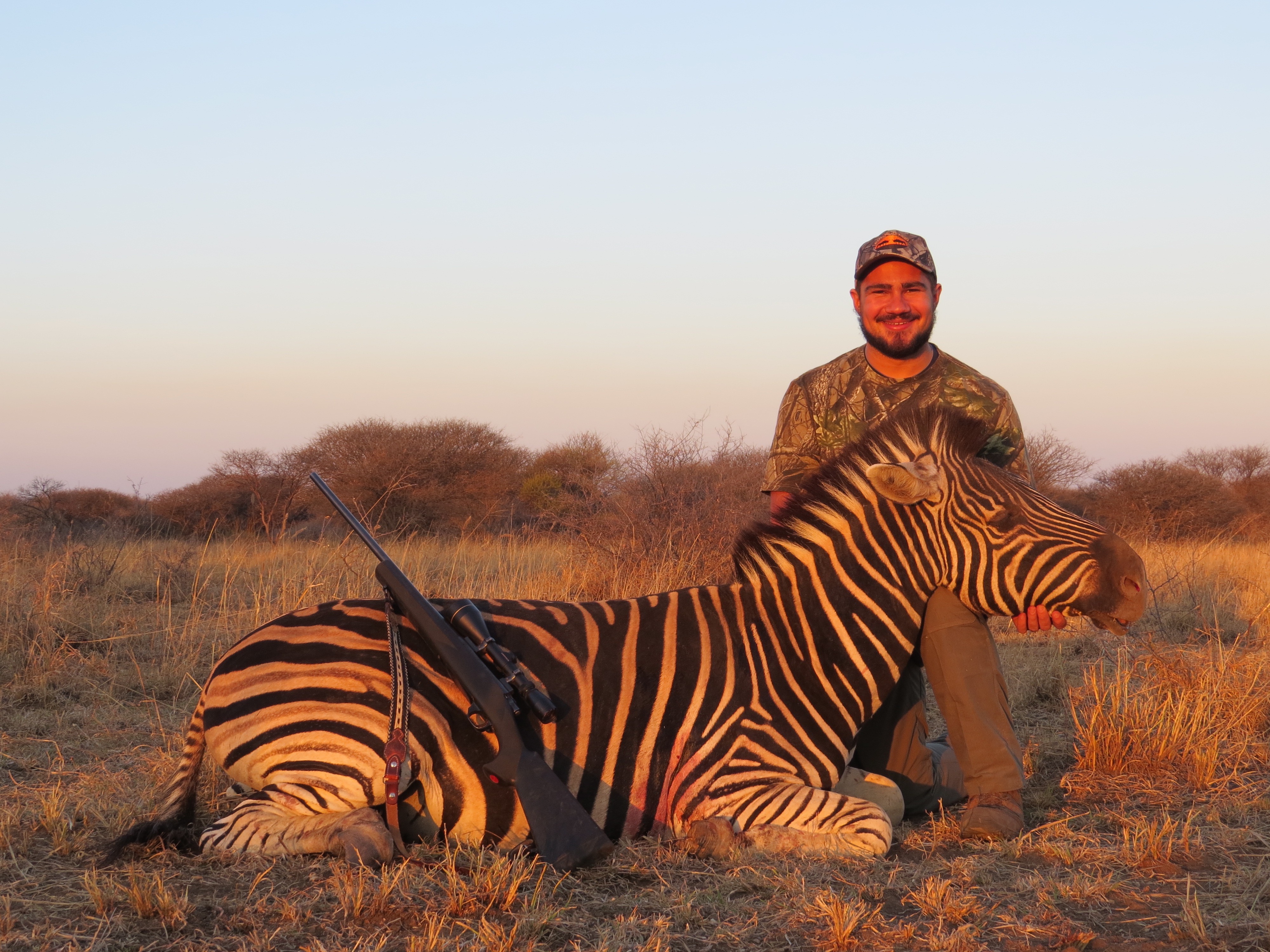 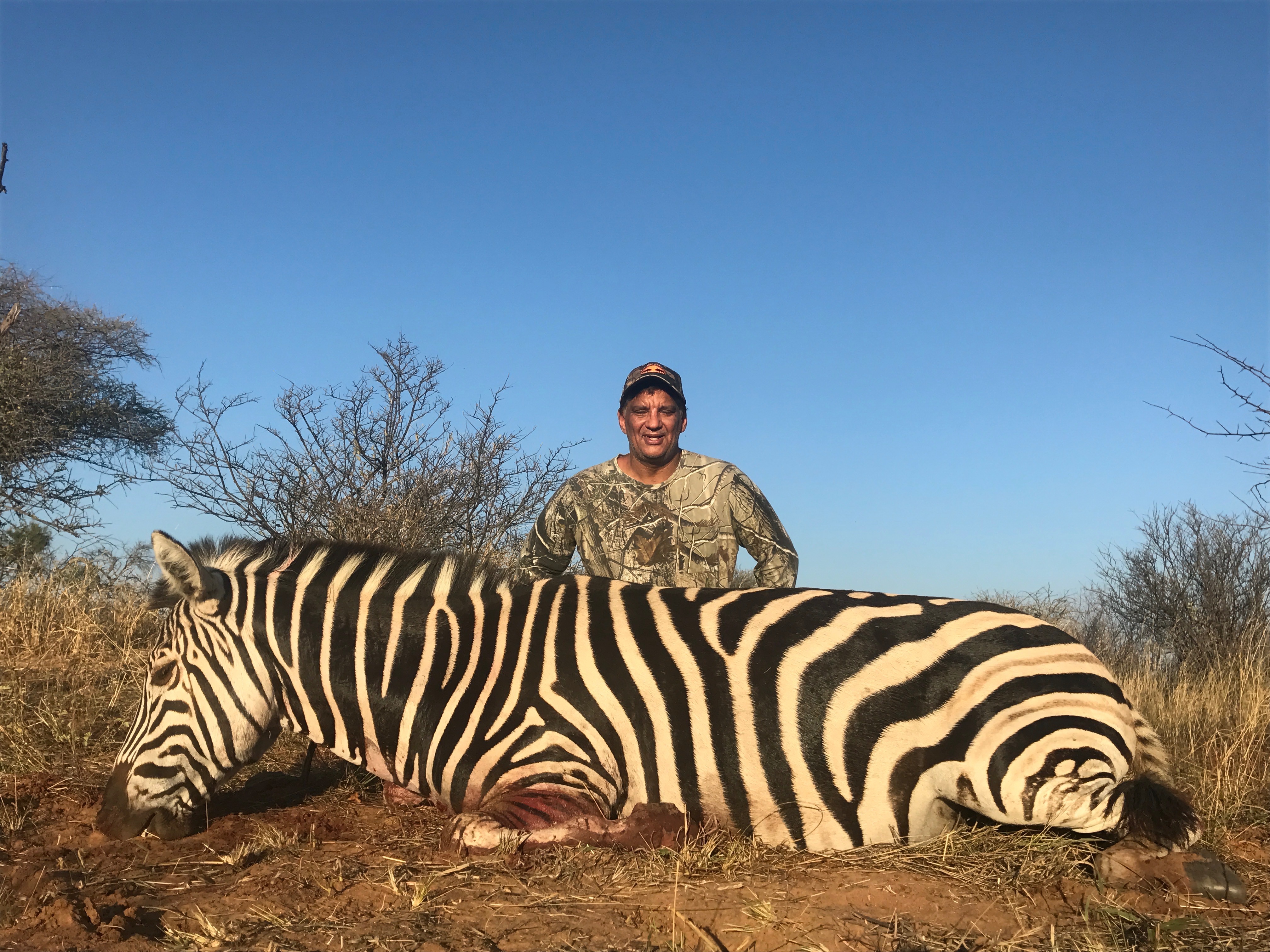 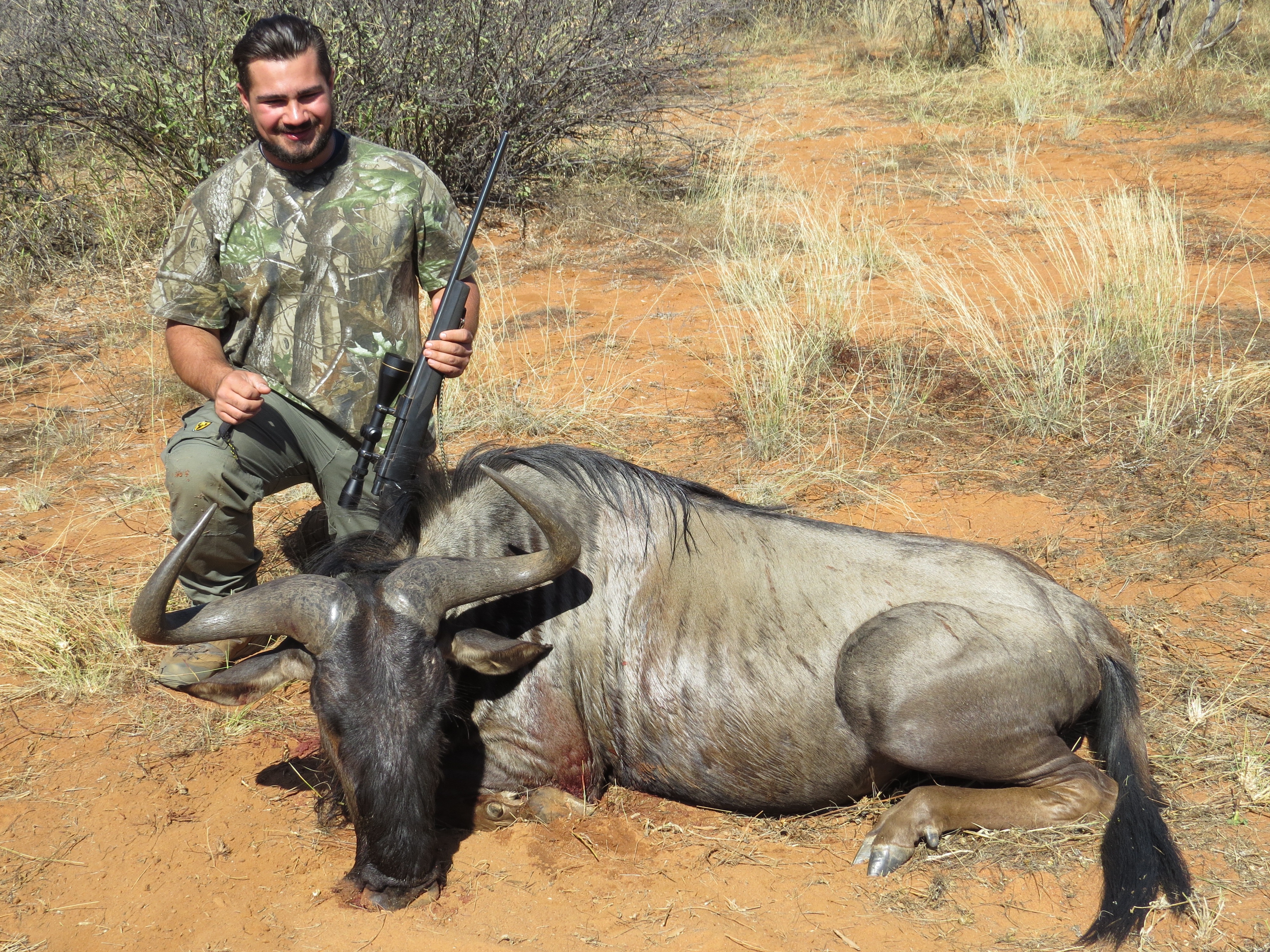 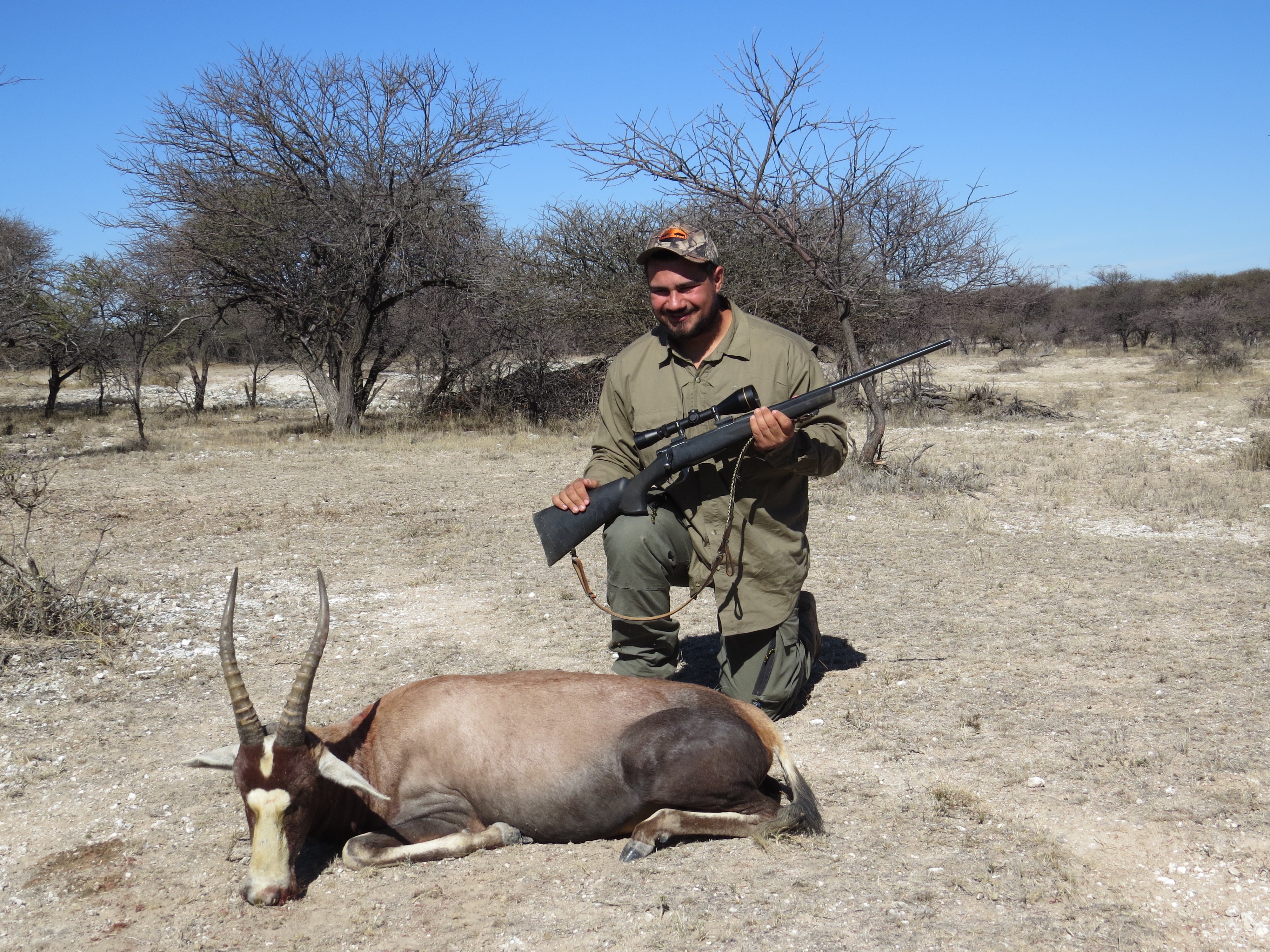 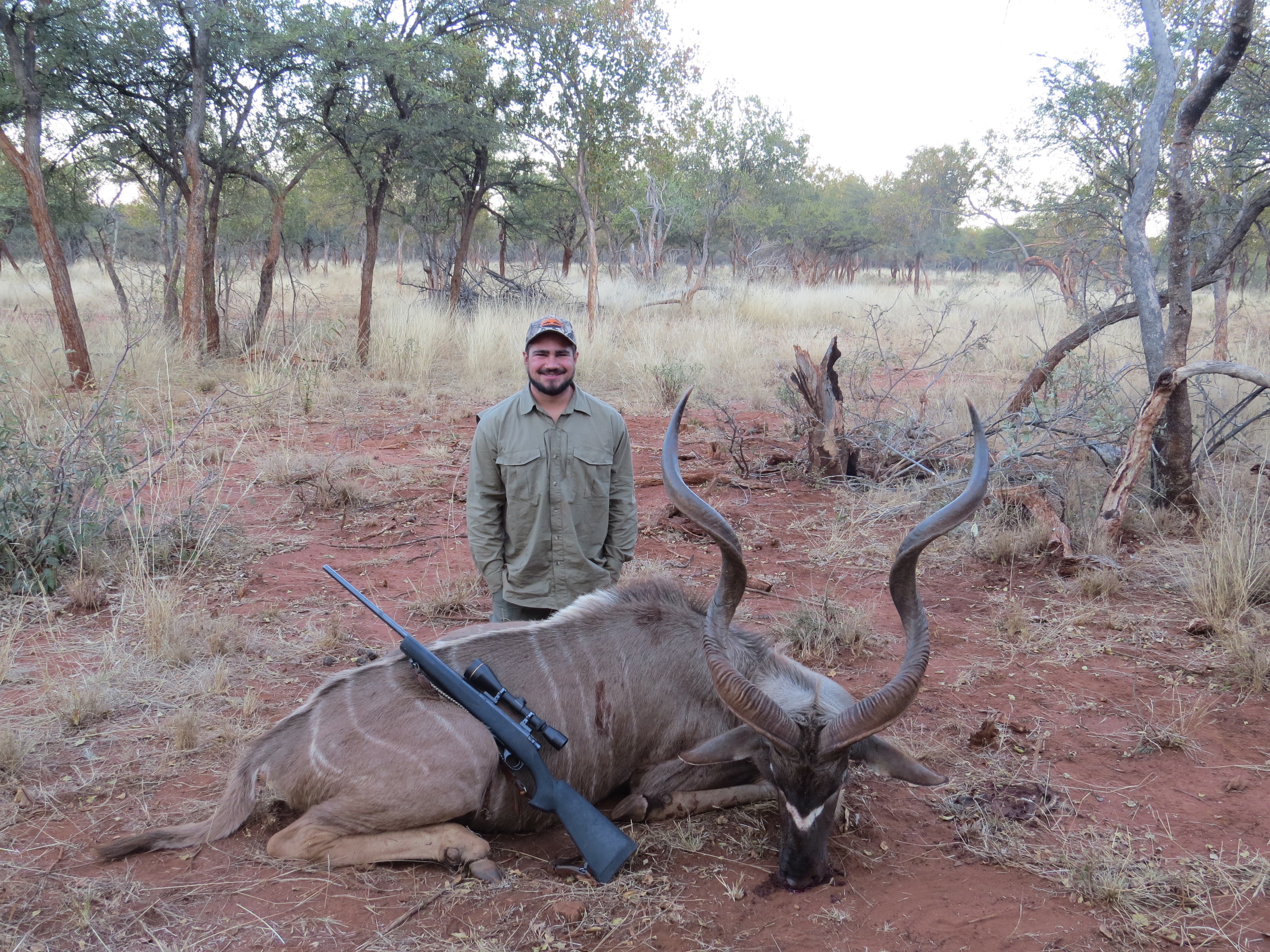 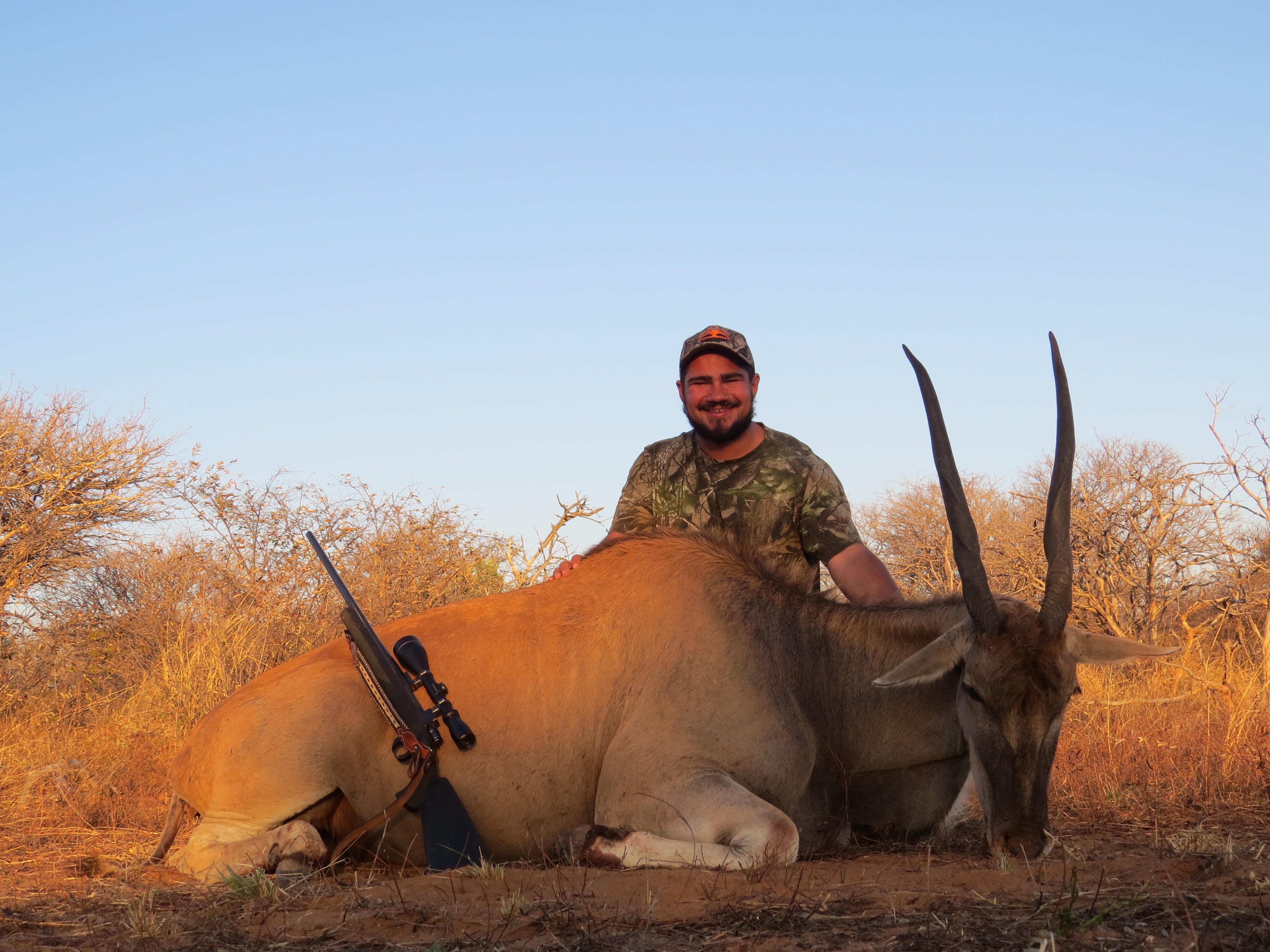 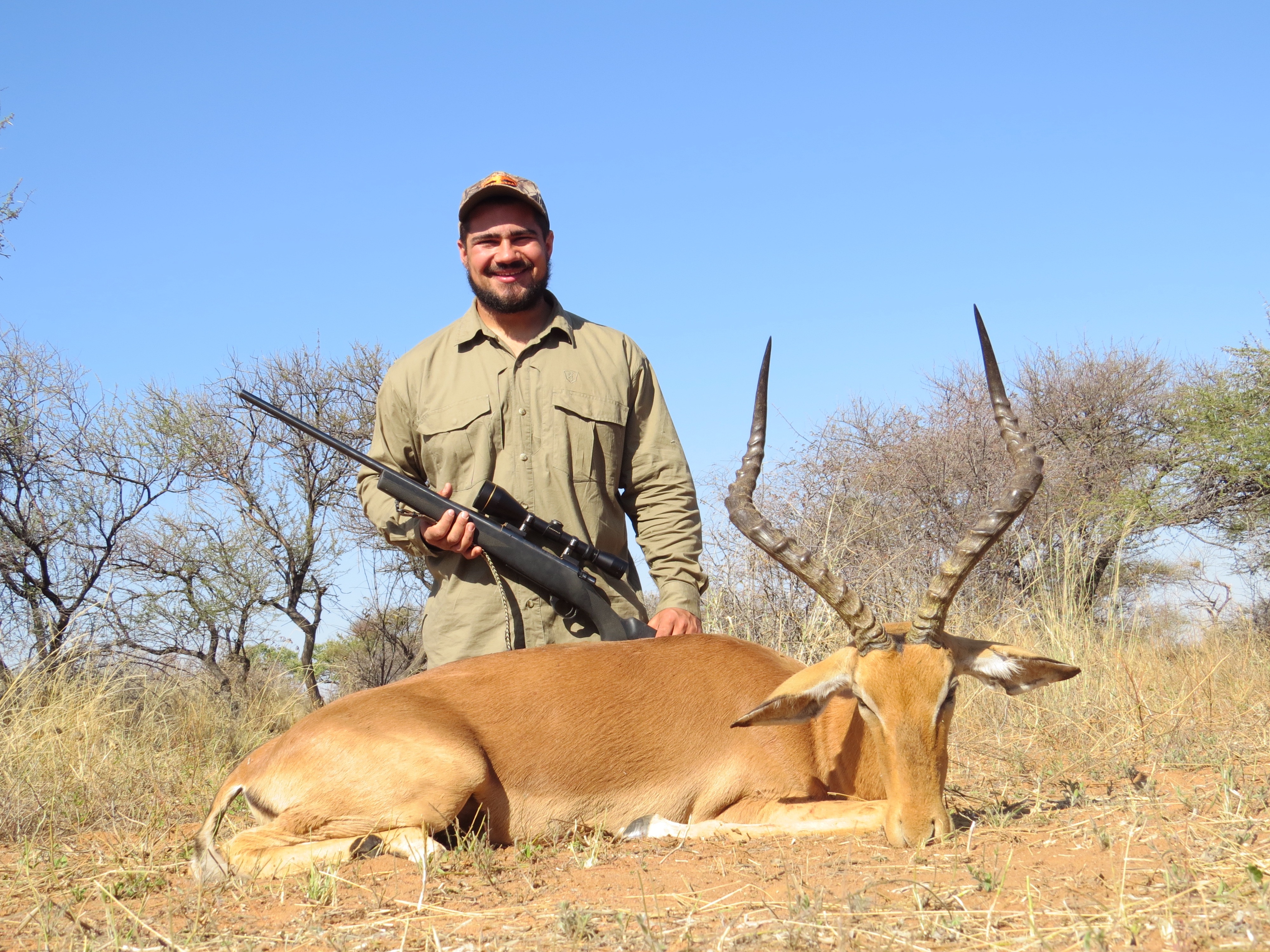 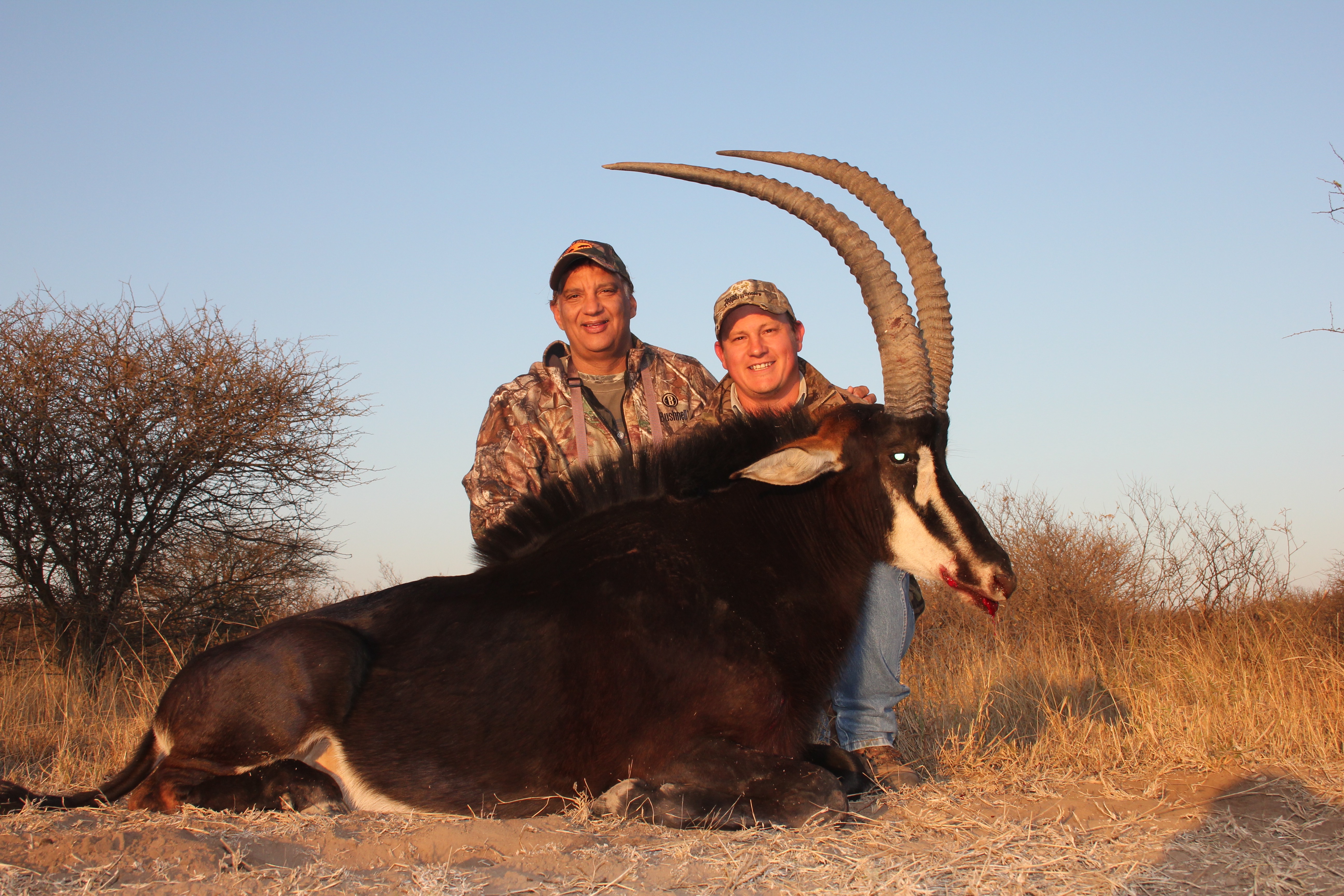 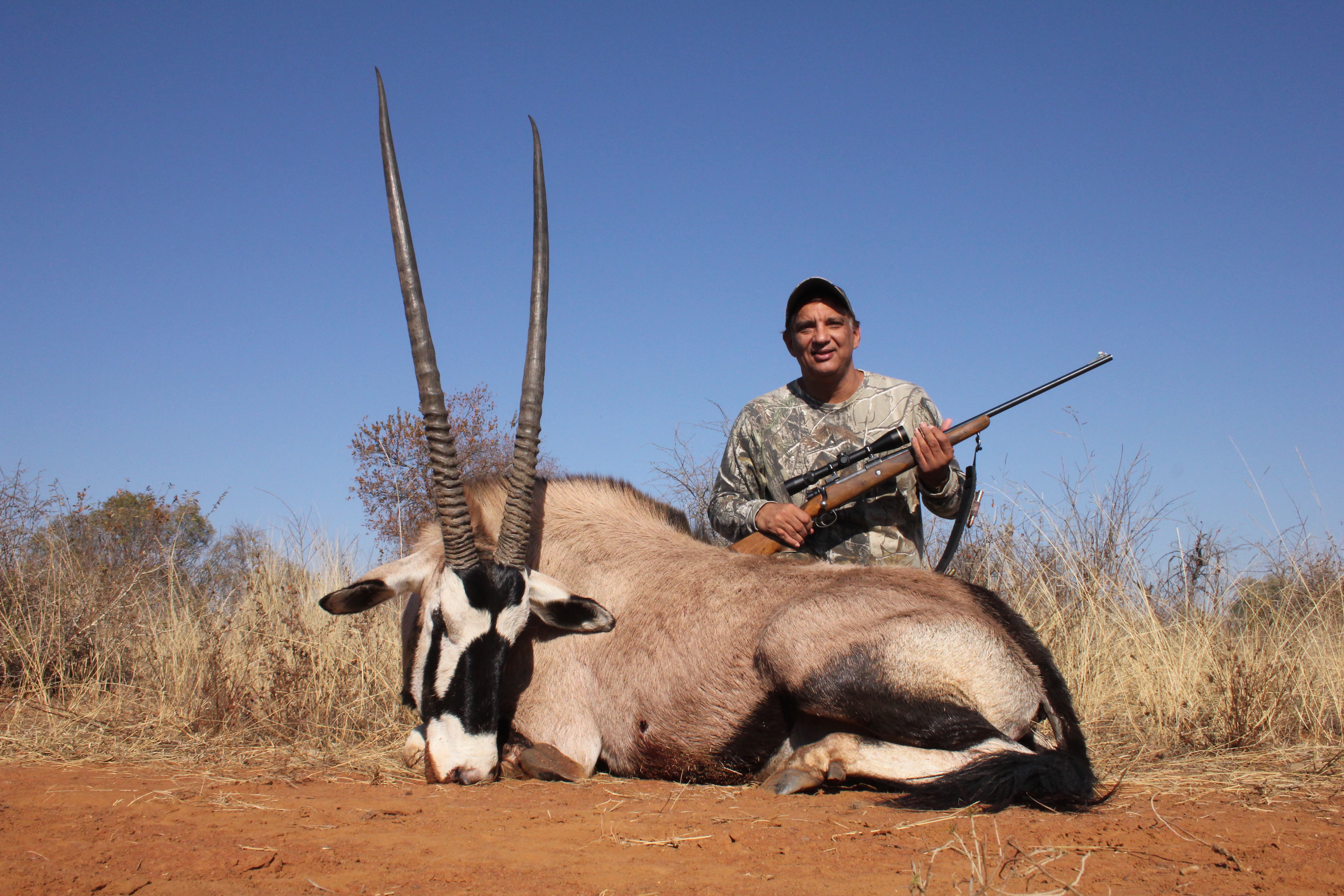 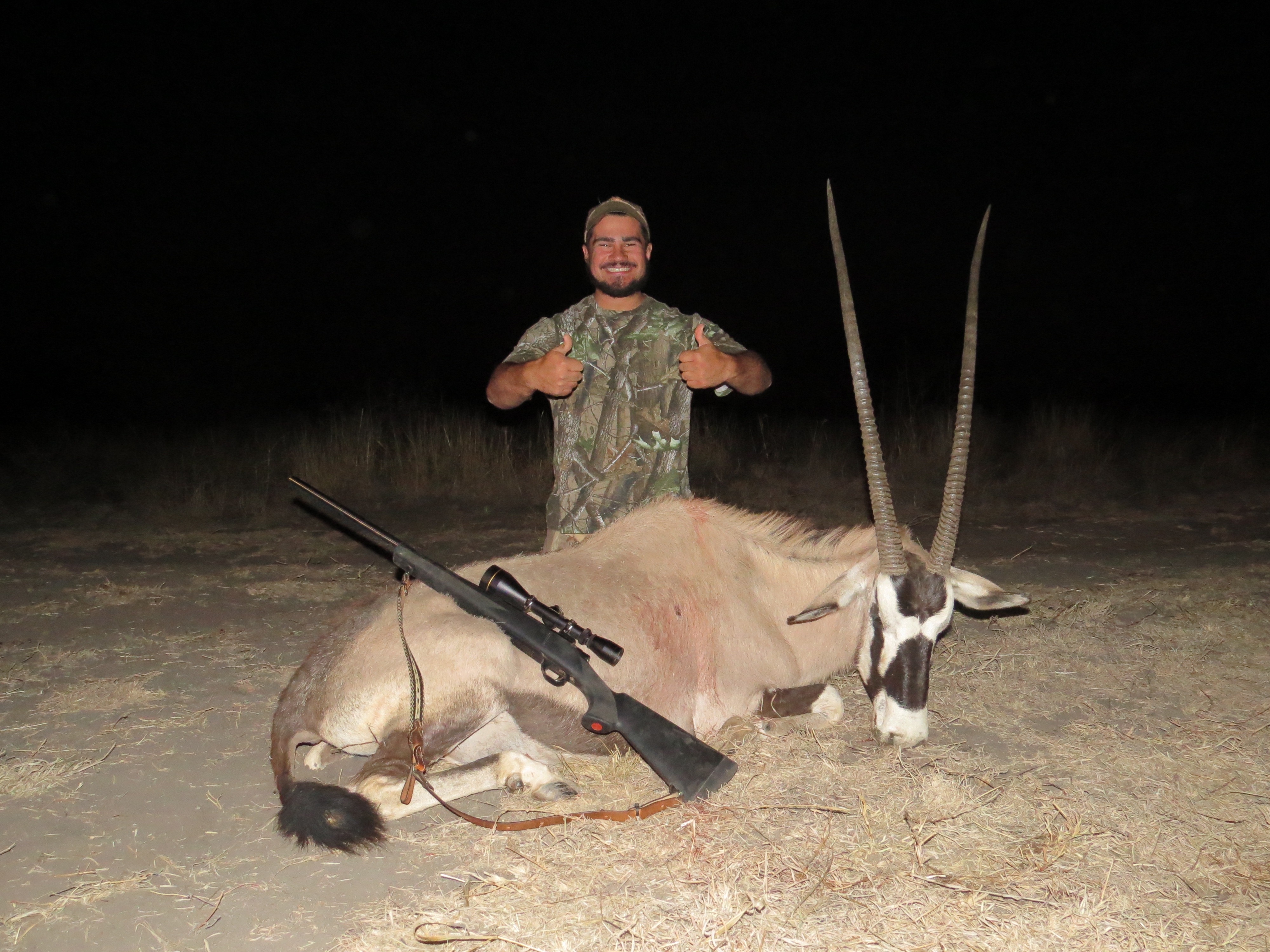 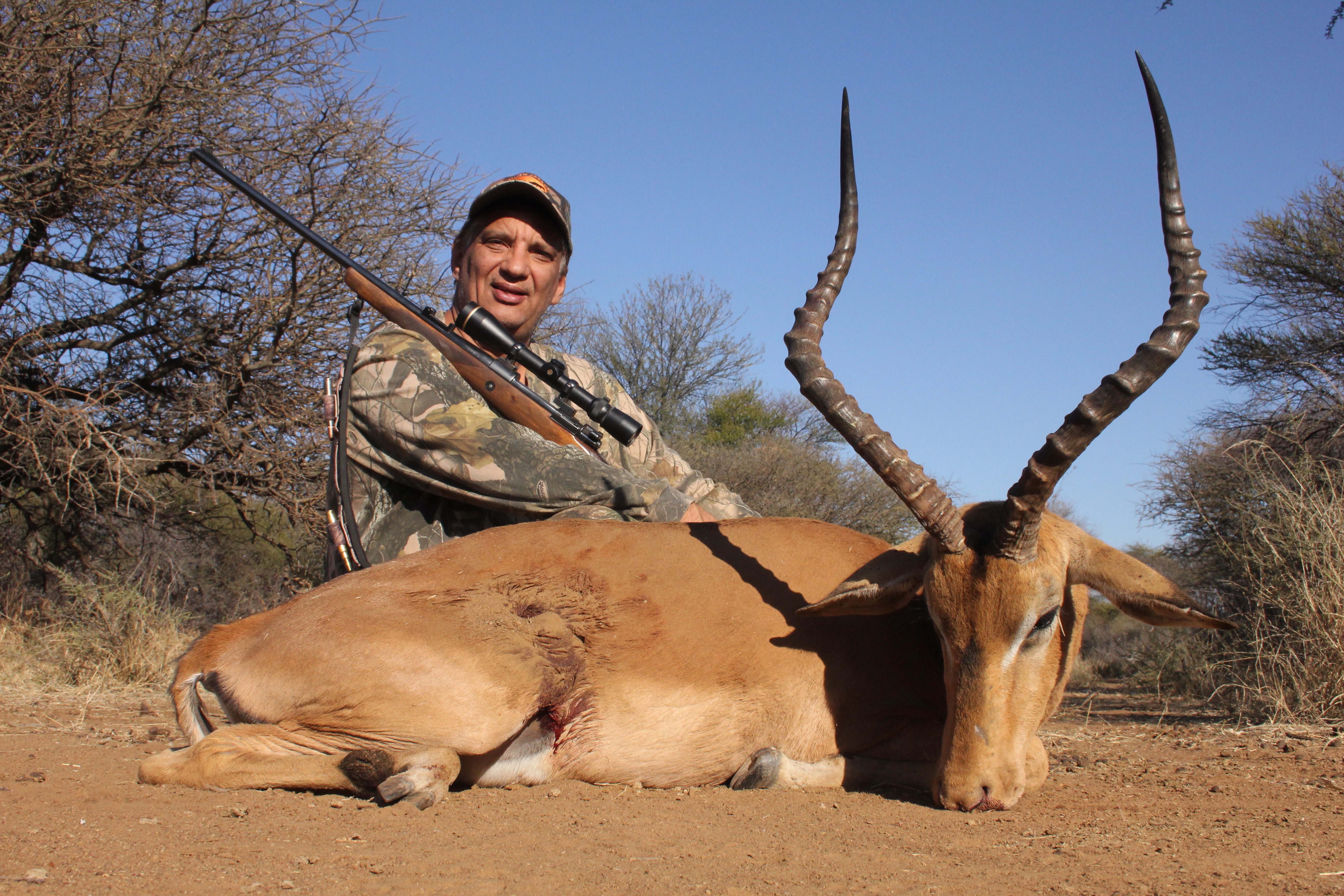 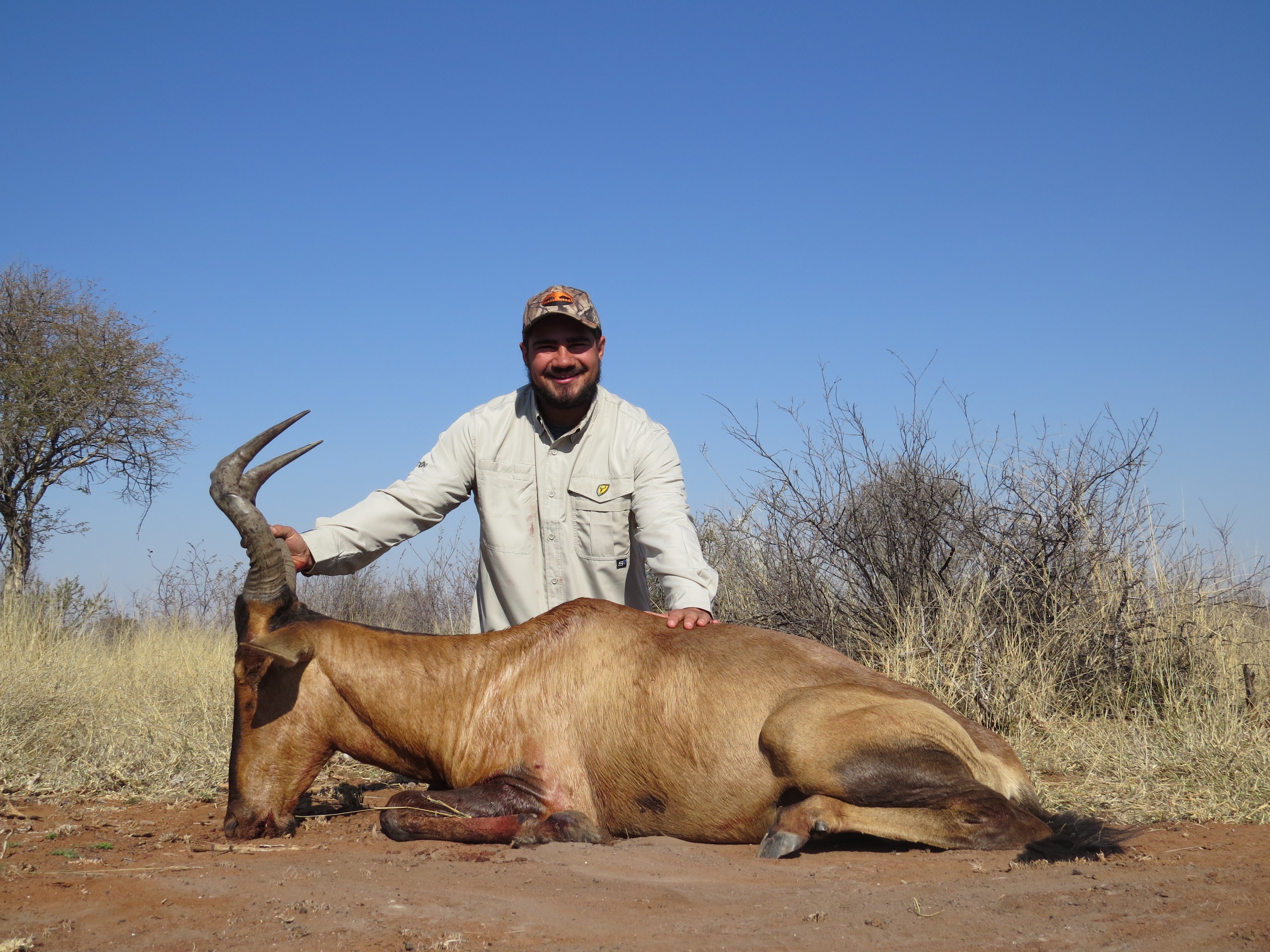 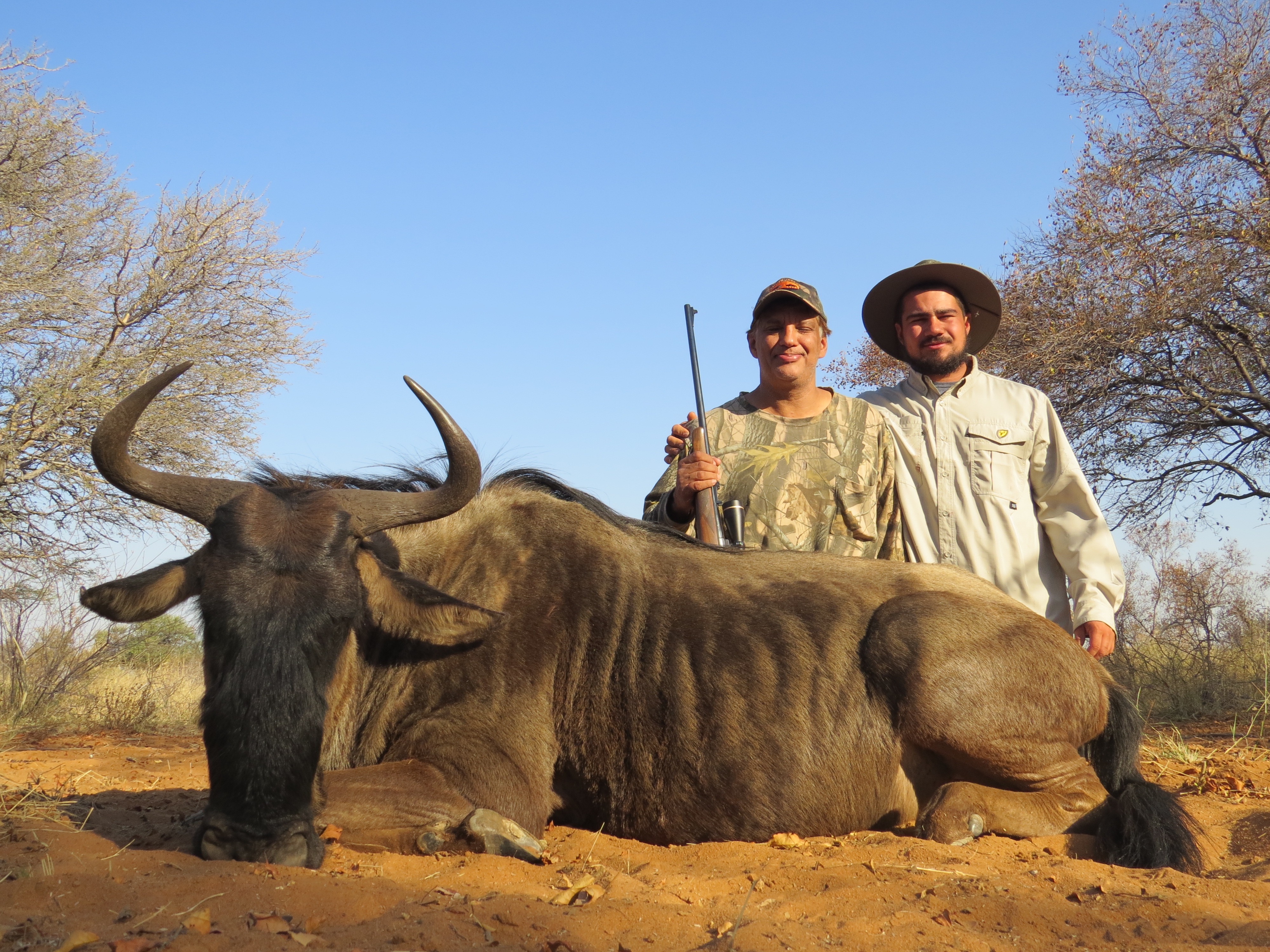 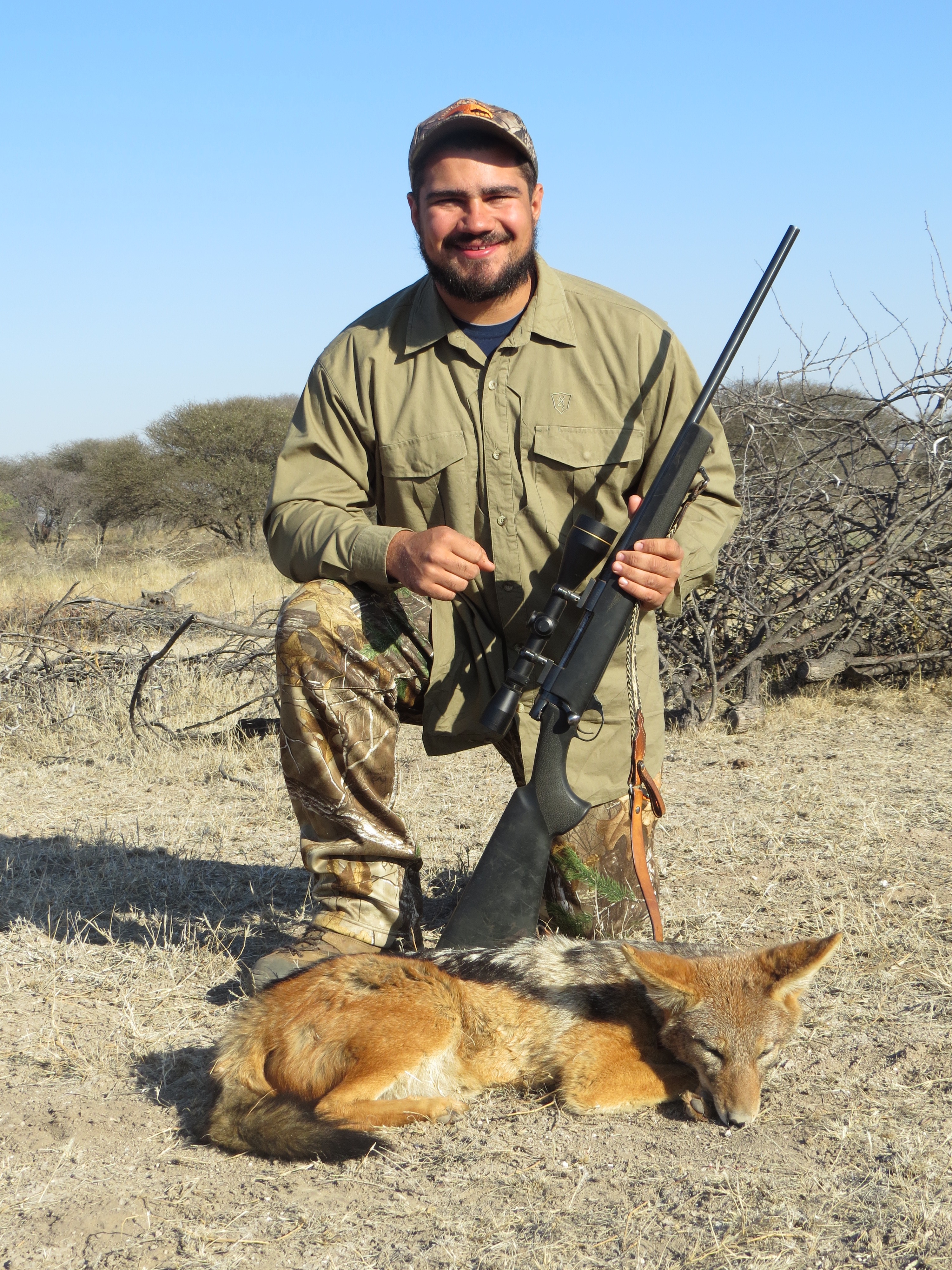 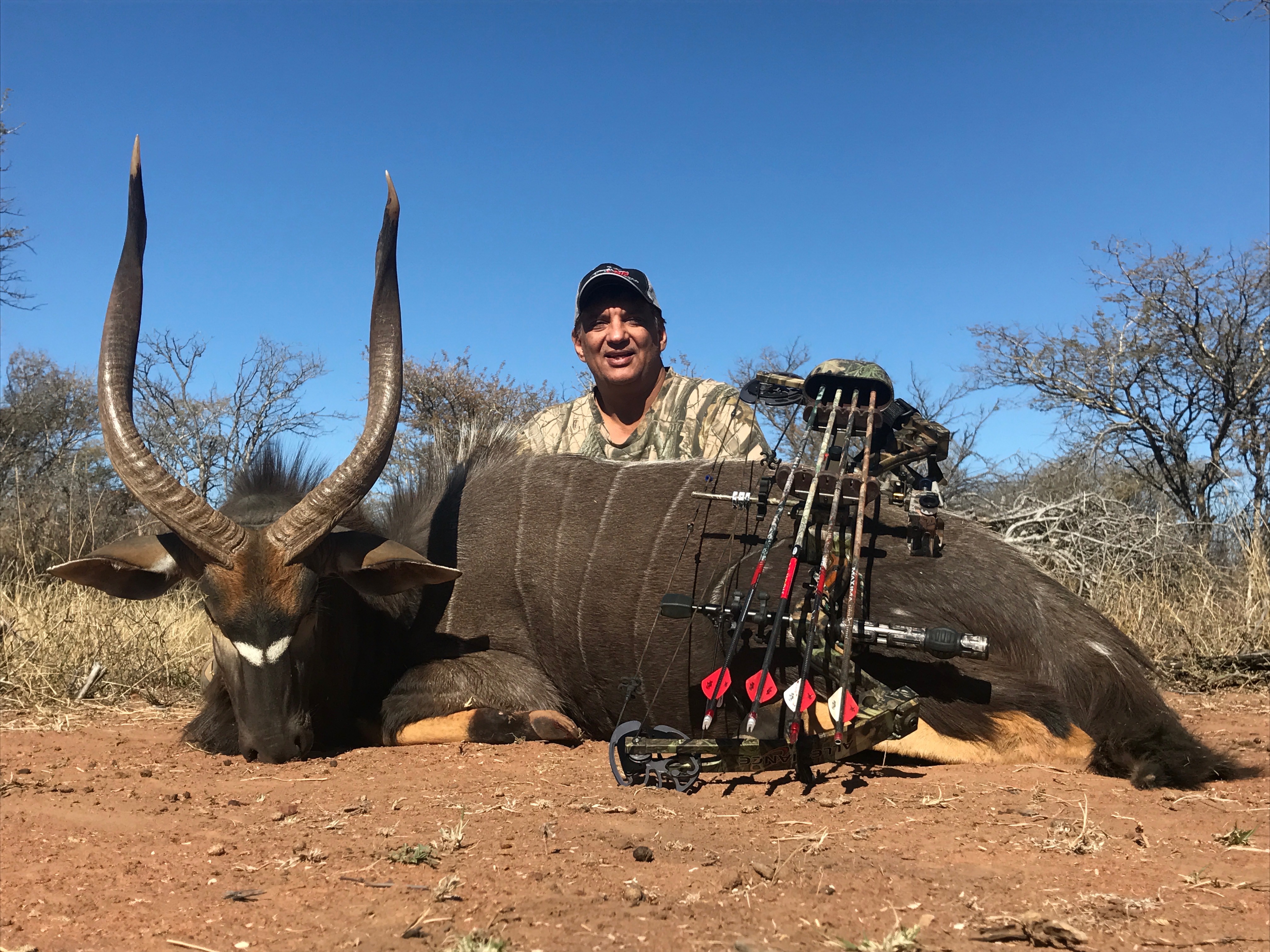 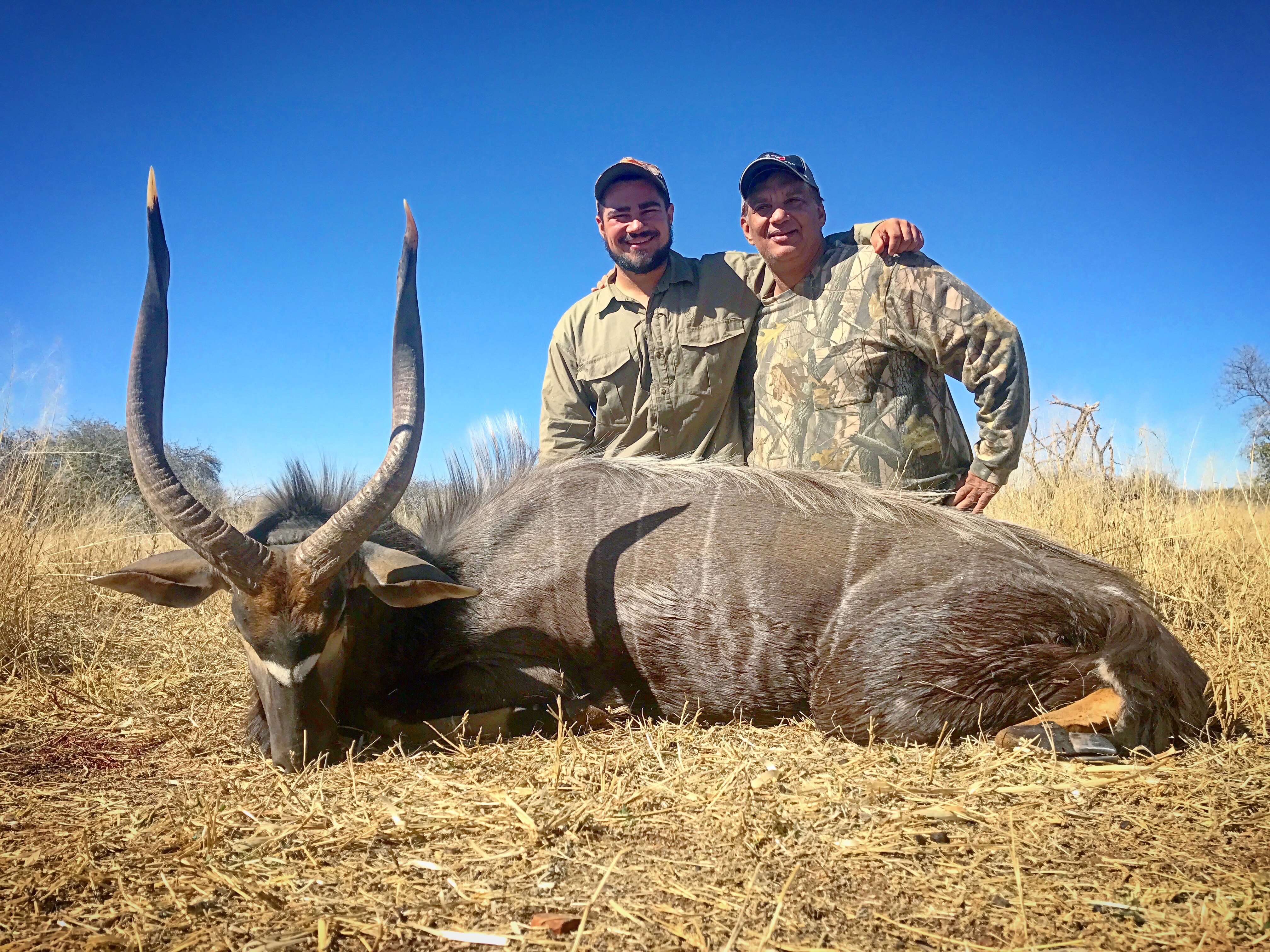 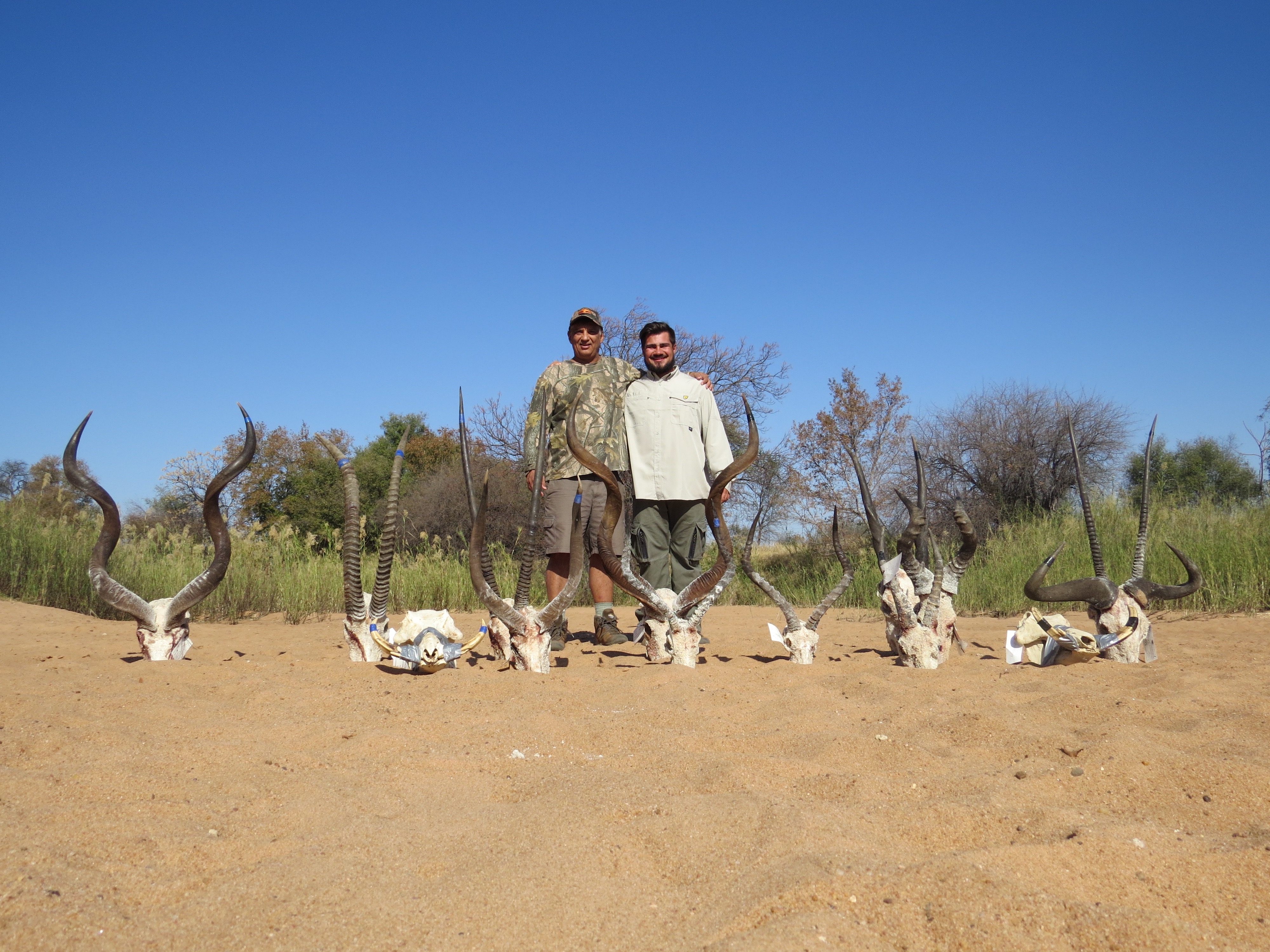 Congrats yall did well!!! Thanks for sharing!
John 3:16

very nice and those are some great story's that will be with you forever. It is amazing how Africa just gets in your soul after being there. My once in a lifetime trip turned into me going on my 5th this year and I see no end for now.

Great that you shared it with your dad to it makes for awesome sharing that time like that.

Thanks for the report. Congrats on a very successful hunt. Well done.

Hans was my PH back in August of 2016. I don't know if they come any better. Is Del Marie still doing the cooking? BTW nice report and photos, thanks for sharing.

Great hunt for you guys. Congrats.

Thanks for taking the time to share. Looks like you did well. Congrats! Never thought I'd be able to go to Africa several times. It does get in your blood. Always something new or bigger to hunt.......
Bruce
C

Shootist43 said:
Hans was my PH back in August of 2016. I don't know if they come any better. Is Del Marie still doing the cooking? BTW nice report and photos, thanks for sharing.
Click to expand...

Delmarie is still doing the cooking. We did not ever go hungry. Hans is incredible to watch and hunt with. Absolutely incredible.

Congrats, and thanks for sharing !

Well done. Thanks for sharing your hunt.

chiefdale said:
Delmarie is still doing the cooking. We did not ever go hungry. Hans is incredible to watch and hunt with. Absolutely incredible.
Click to expand...

I noticed Craig was your PH as well, he's pretty good as well.

Thanks for taking the time and sharing your story with us.

Very nice. Thanks for posting. What bow was your dad shooting? I couldn’t recognize the brand.
C

Bow was old faithful bow tech alligance 70 pound draw with 150 grain dry broadhead with carbon express 350 max hunter with insert totals arrow weight 550 all animals at 25 yards in pit blind (shooting 4 to 5 feet above your head)all pass through. With arrow going 30 to 40 yards past animal . Craig was really impressed how old bow out performed most of new bows that have been in camp(drt. Broadhead)Craig and Hans without a doubt two of the finest ph you will ever have opportunity to hunt with. To watch them track a wounded animal in a herd that is not bleeding is nothing short of amazing .take your kids hunting for a lifetime of memories. Yes I did but by the African bug bad already. Was going to do elk and moose next on bucket list. Nope . Why spend 8 to 12 thousand for one animal when I can go to Africa and harvest 10 quality for same price.life is so short don’t let pass you buy Everybody needs to go to Africa at least once in their life. Already in works of scheduling two more trips. God bless chiefdale sr
You must log in or register to reply here.

D
drbeech1968
A couple pictures of the sable i chased for miles in Mozambique, Coutada 9!! We finally caught up to him and I had the trophy of a lifetime. Mokore Safaris, Doug Duckworth PH

6.8KLR Von Gruff 6.8KLR wrote on Von Gruff's profile.
G'Day,
Long time no talk. I had a bad accident and was discharged from the hospital last Thursday after a three month stay. Am home now and all is well. So glad to be back. Missed you all on this board. Hope all is well with you. Killed a nice Mule deer last October and used the stainless Buffalo Skinner that worked to perfection and love the wood.
Regards, Mike in California.
Thursday at 5:35 PM •••