I did not post a report from my 2018 safari to Huntershill, and now that I am returning from another excellent safari with them I will post a report from both trips. During both safaris, the accommodations, food, service from the staff, and hunting experience were all excellent. The staff at Huntershill safaris went above and beyond to make sure I was happy and having a great hunt. Since I am combining 2 safaris on one post, I will try to keep it as short as possible.

In May 2018, I booked a springbok slam hunt with them with a few additional animals on my list if I had a few days left before flying home. Upon arrival, I was greeted by the owner (Greg Harvey) and discussed the firearms that I had brought on the trip, ammunition, and distance I was comfortable shooting as springbok hunting can require some longer shots. Over the next 2 days, we hunted hard and finished out my springbok slam. 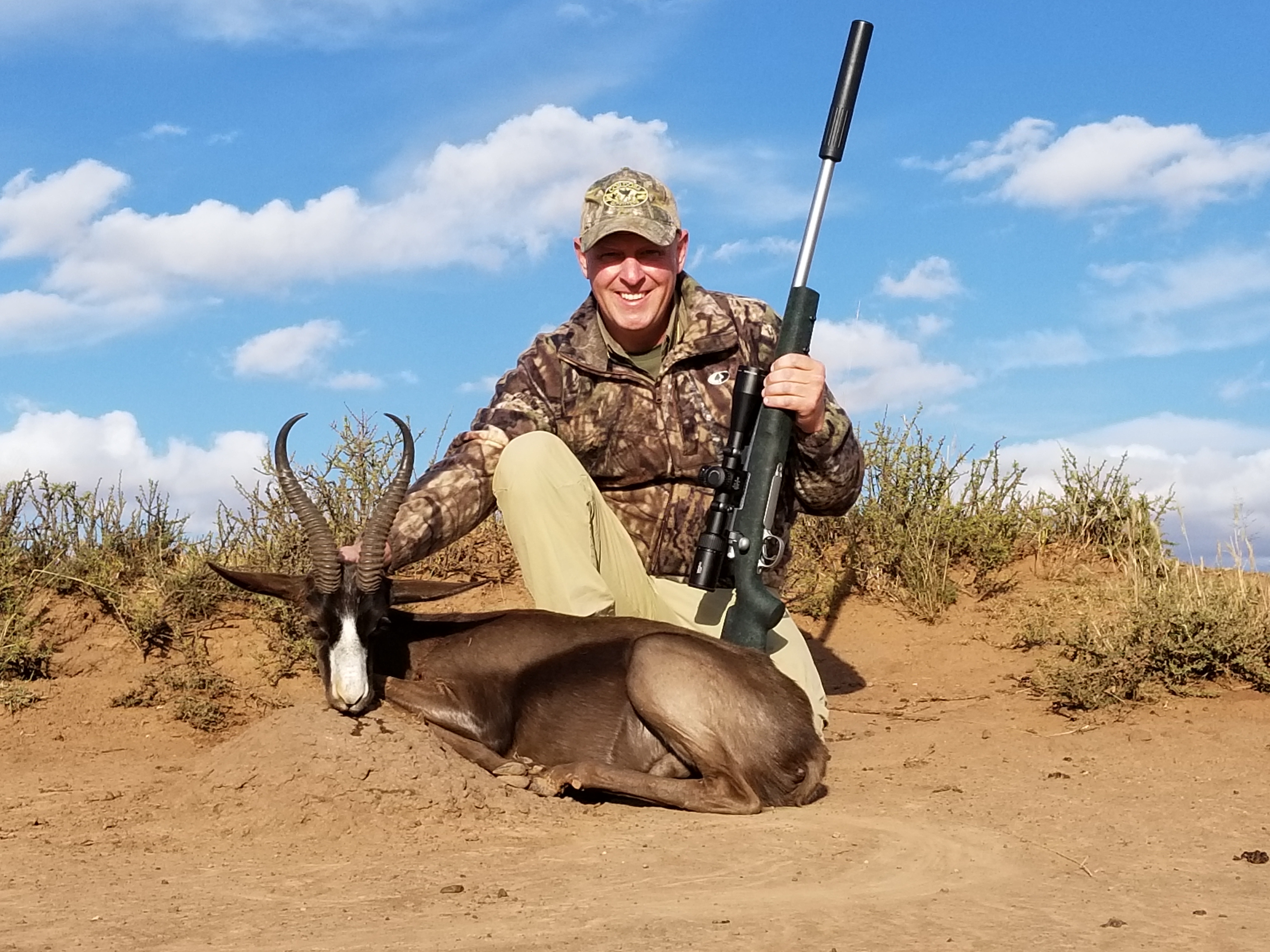 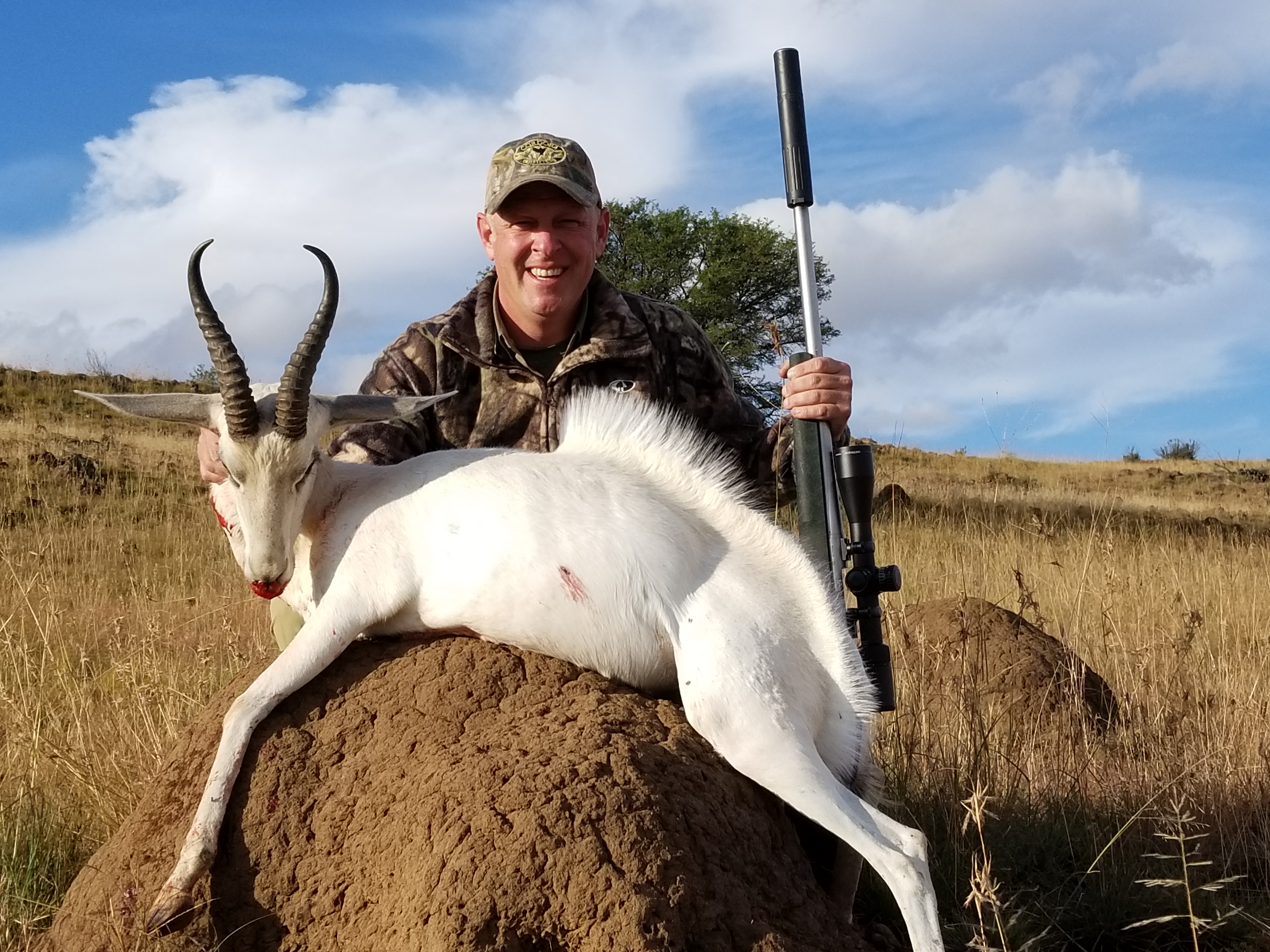 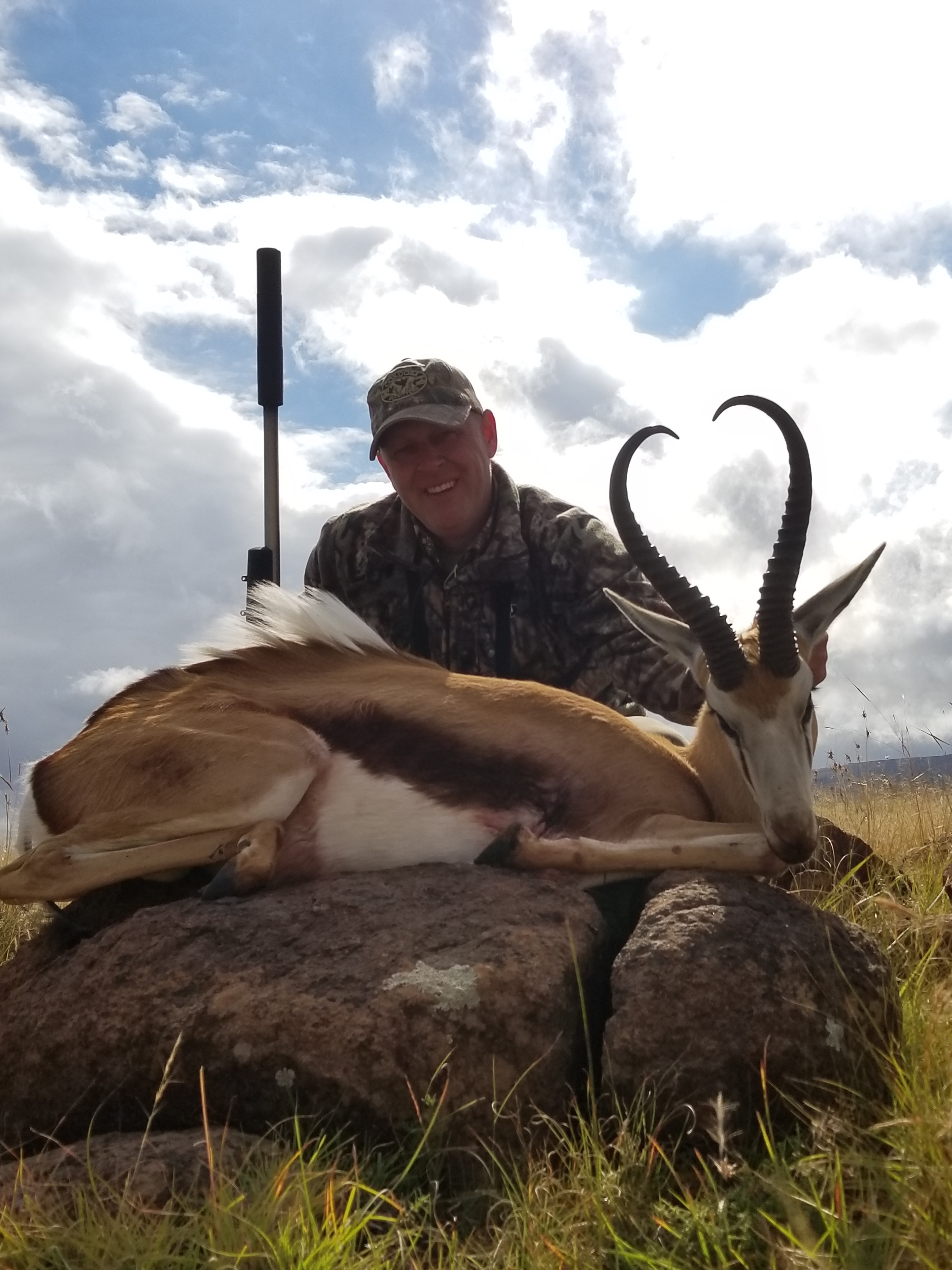 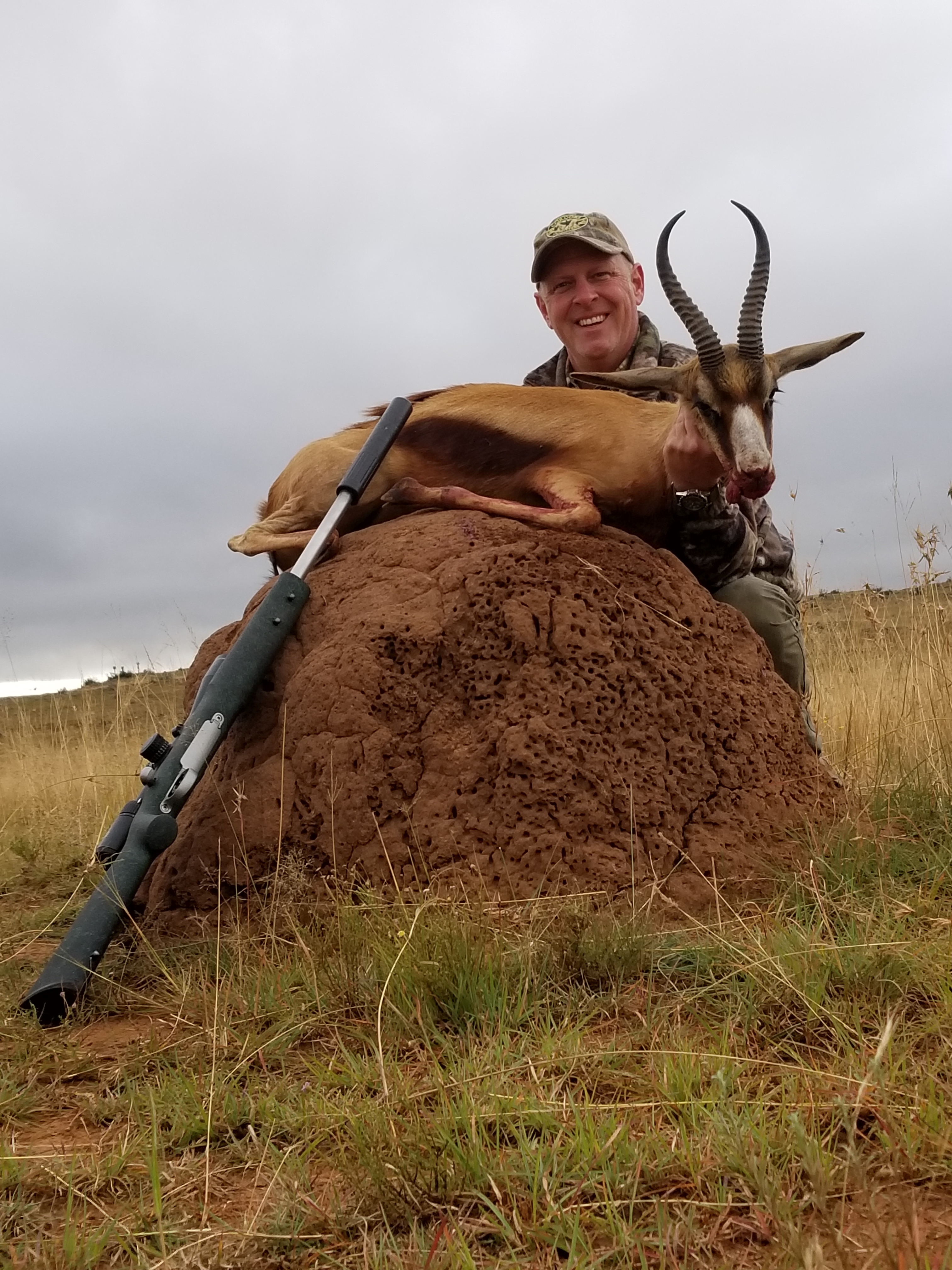 While hunting springbok, I mentioned to Greg that I would like to finish my Beest slam with red hartebeest and black wildebeest. Also, if we saw a couple of nice zebra, I wanted a pedestal mount and a rug for my trophy room. After the springbok slam, we started looking for these animals. We hunted one zebra and the red hartebeest on Huntershill, then moved to Comre for black wildebeest and another zebra so I could see another one of their properties. Both properties were beautiful and saw many species of animals around every corner and hillside. 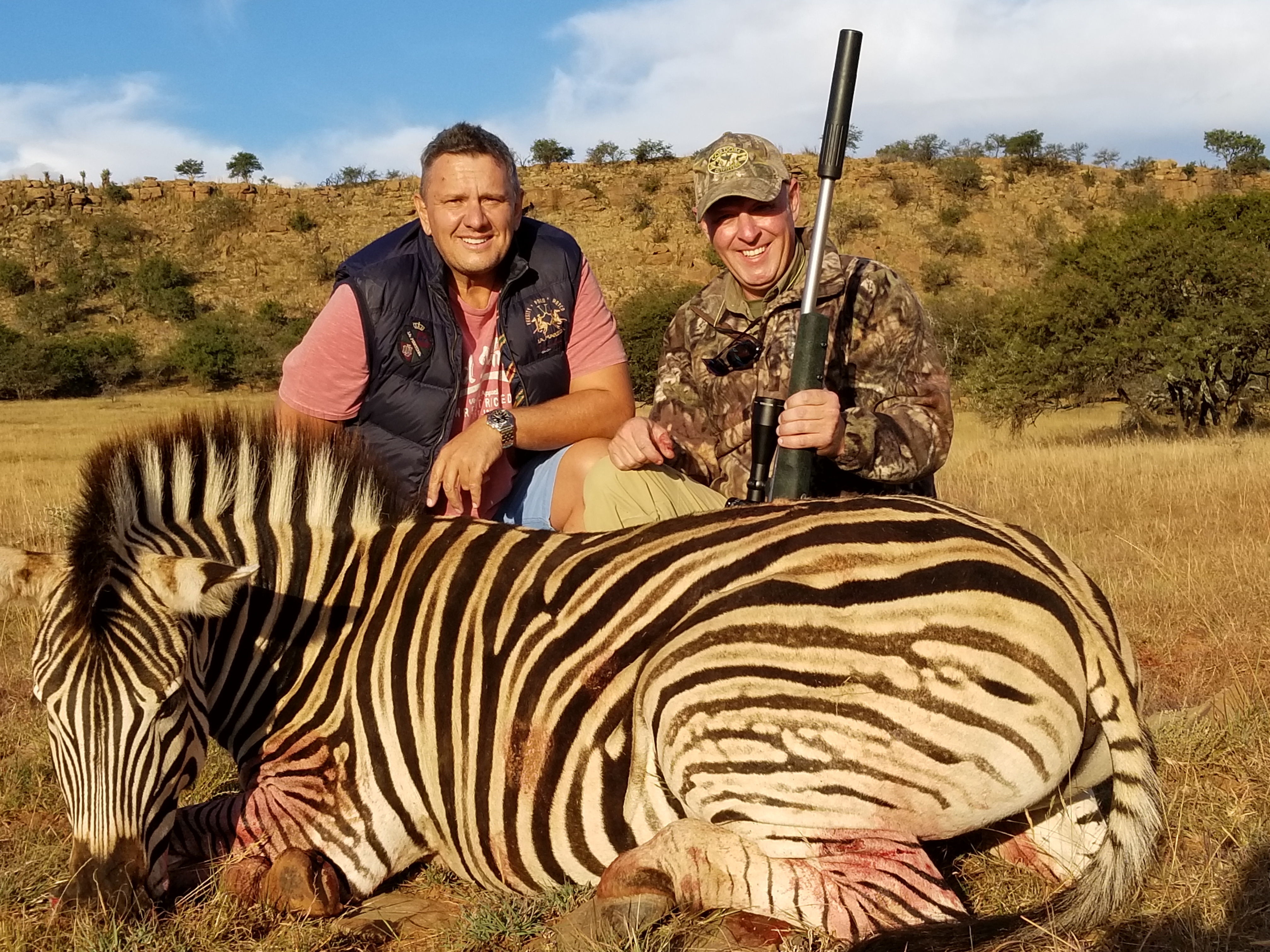 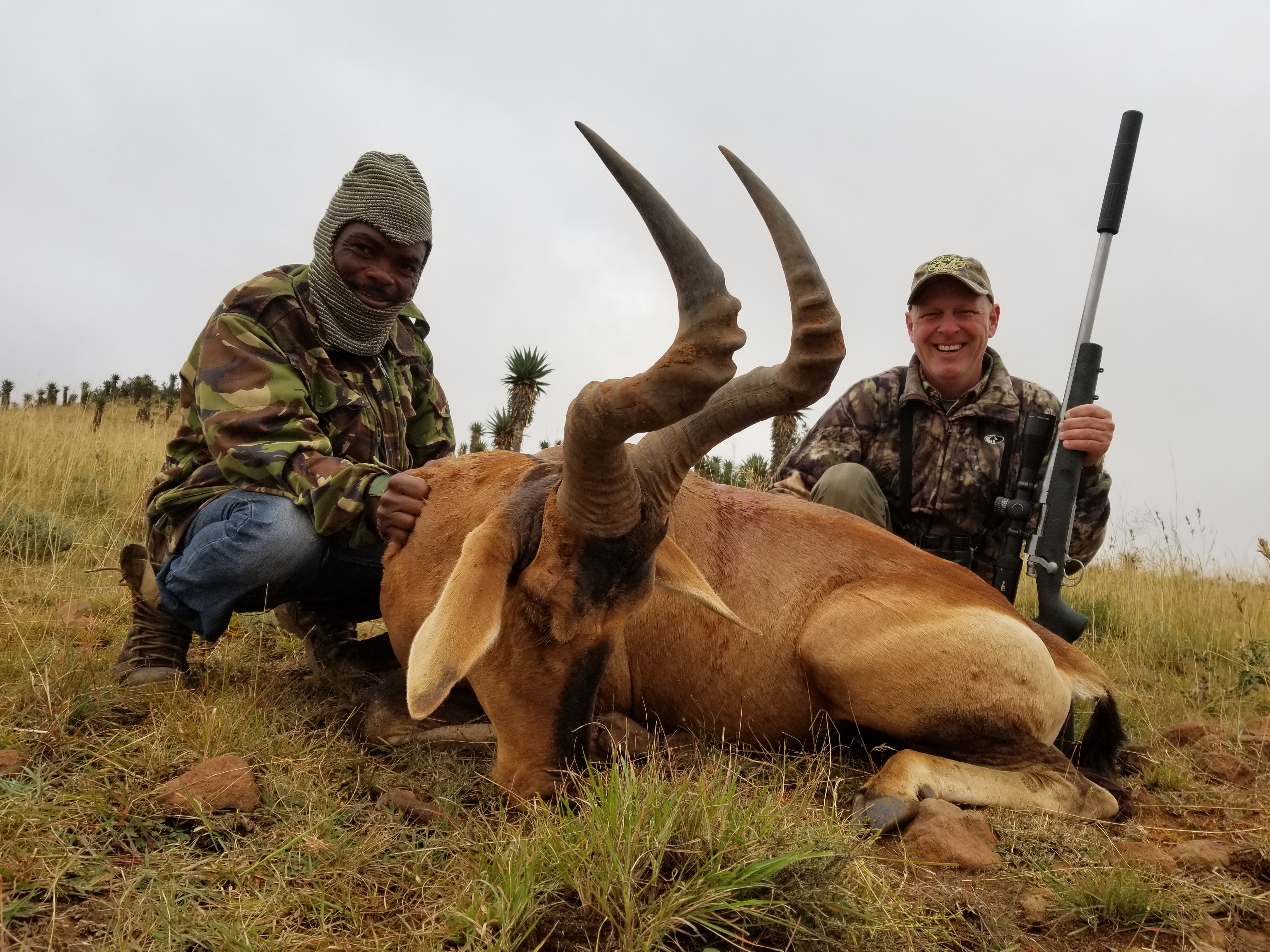 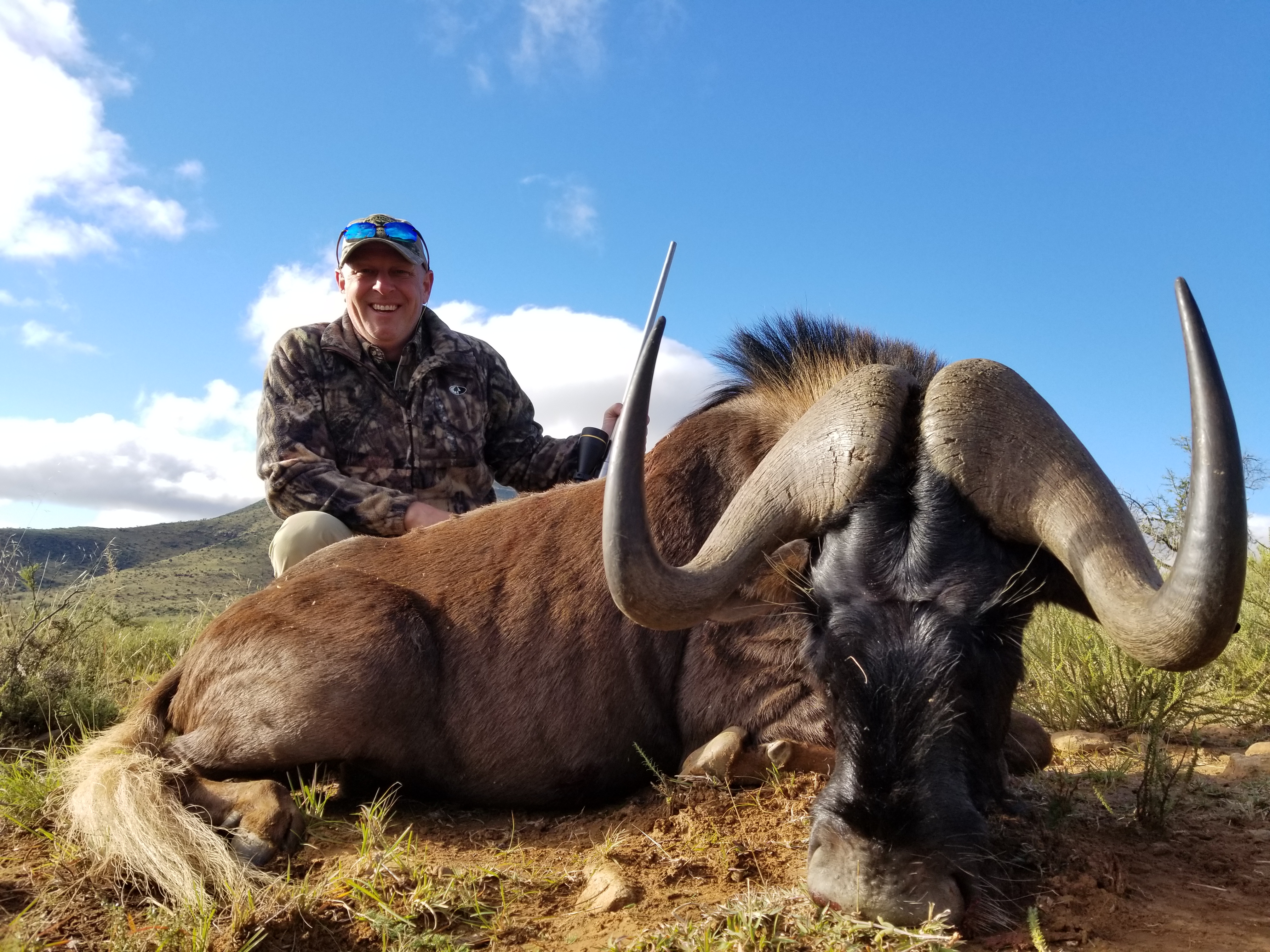 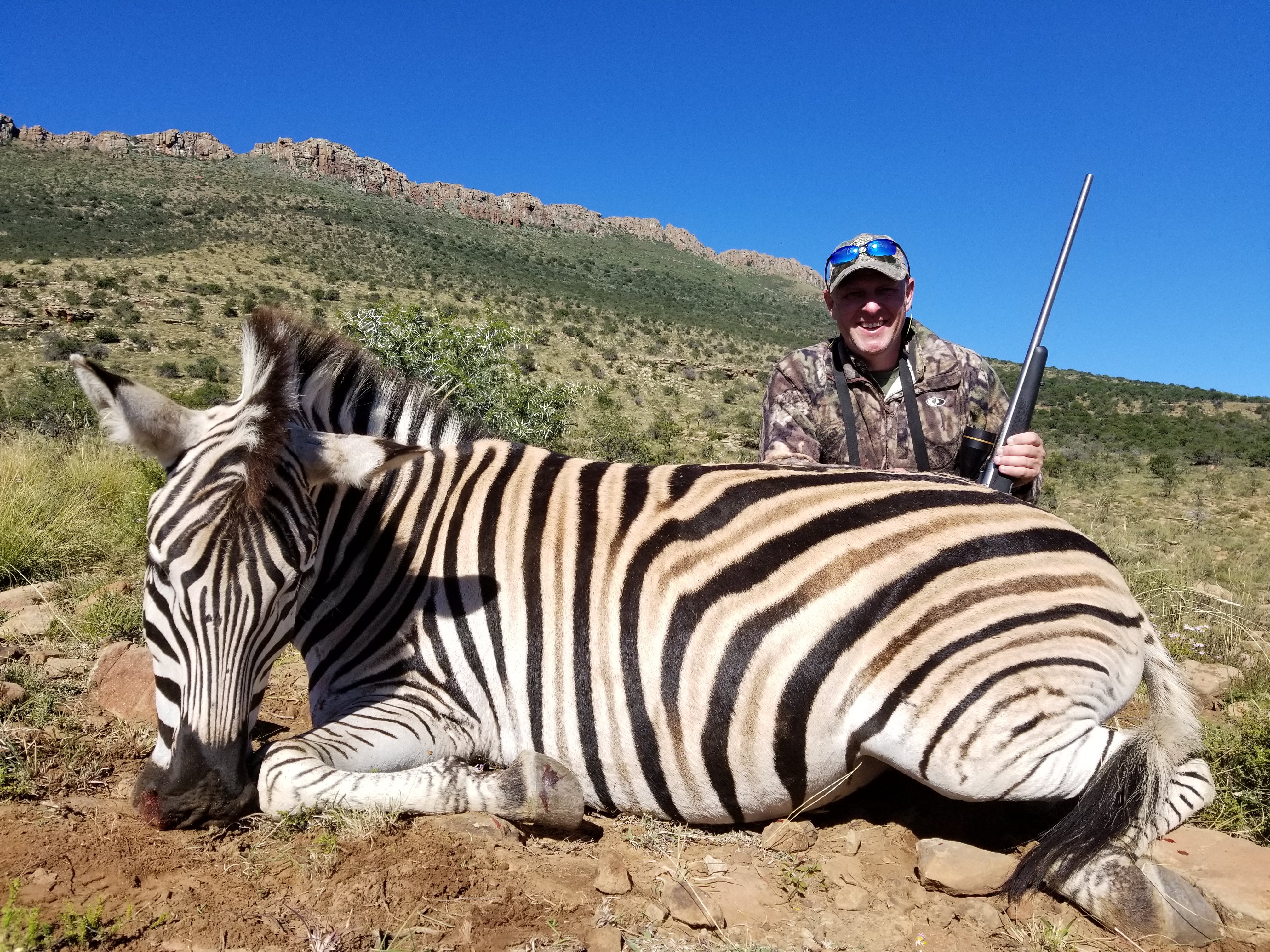 While hunting with Huntershill in 2018, I told them that I would be back in 2019 for eland, white blesbok, and golden wildebeest.

In May, I returned to Huntershill for a short 5 day safari due to a busy work schedule. My primary goal was to get a nice eland to complete my spiral horn slam. When I arrived, I met my PH Patrick. We discussed different animal options and how I would like to put in the work to get a nice eland and white blesbok. The first day we spent sighting in my rifle and looking for eland. We saw several groups of eland, but nothing that we were interested in putting a stalk on.

When we arrived at the lodge for cocktails and dinner, I met Bobby Puckett and his wife Deb. They were hunting in another area and had seen a big eland bull. So we made plans to be there early the following morning. After a lot of miles on foot checking every brushy area that this bull had been seen in, we still had not laid eyes on this bull. We decided to skip lunch and keep looking for this bull. Around 2:00, we were glassing a thick draw and the tracker spotted the bull with a group of cows bedded near a small water hole. They winded us and ran out of the draw into an open area with scattered acacia trees. The bull stopped briefly at 300 yard and I squeezed off a shot from my 7mm mag. The bullet hit perfect in his lungs and he ran 100 yards before falling over. 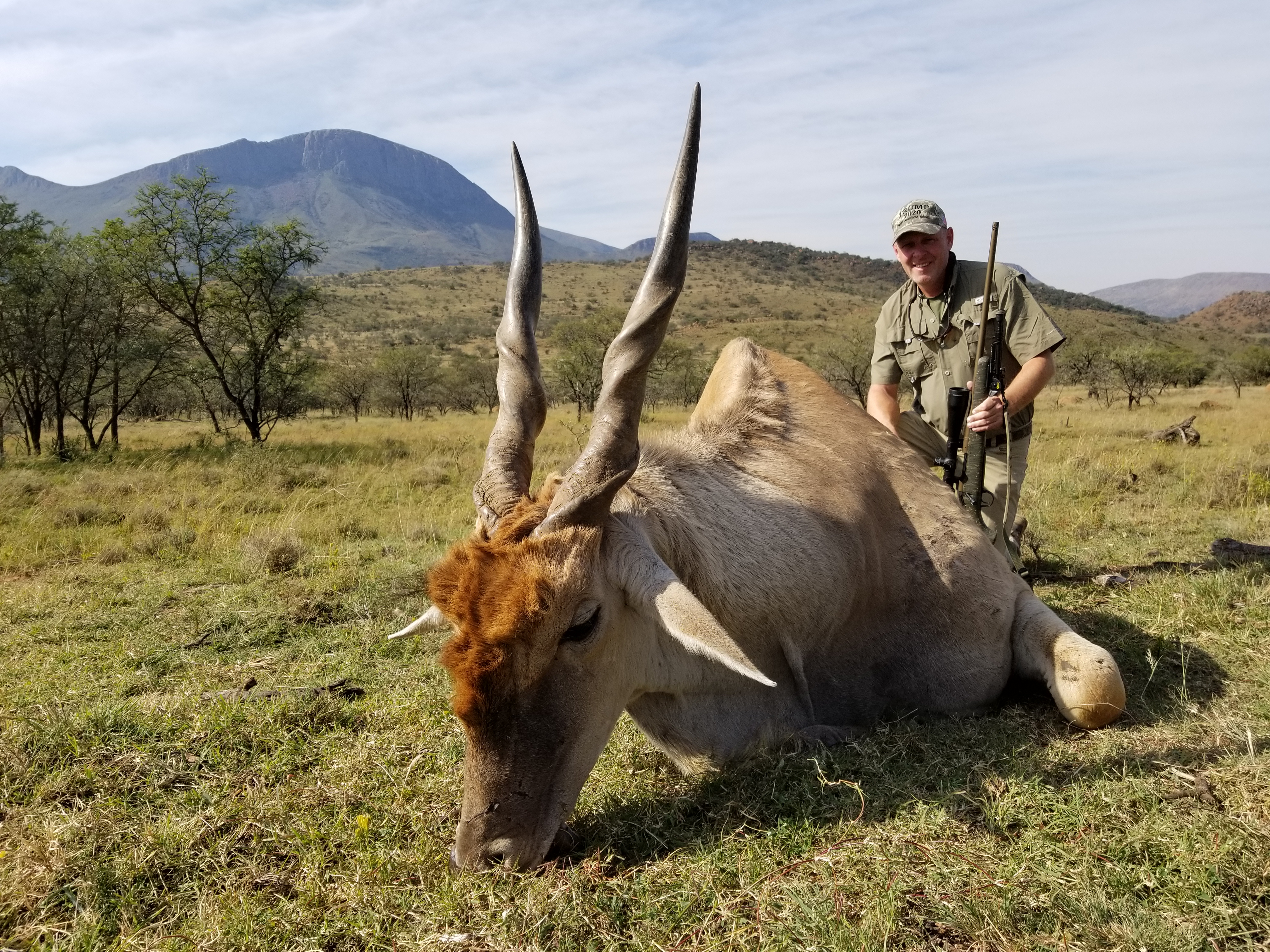 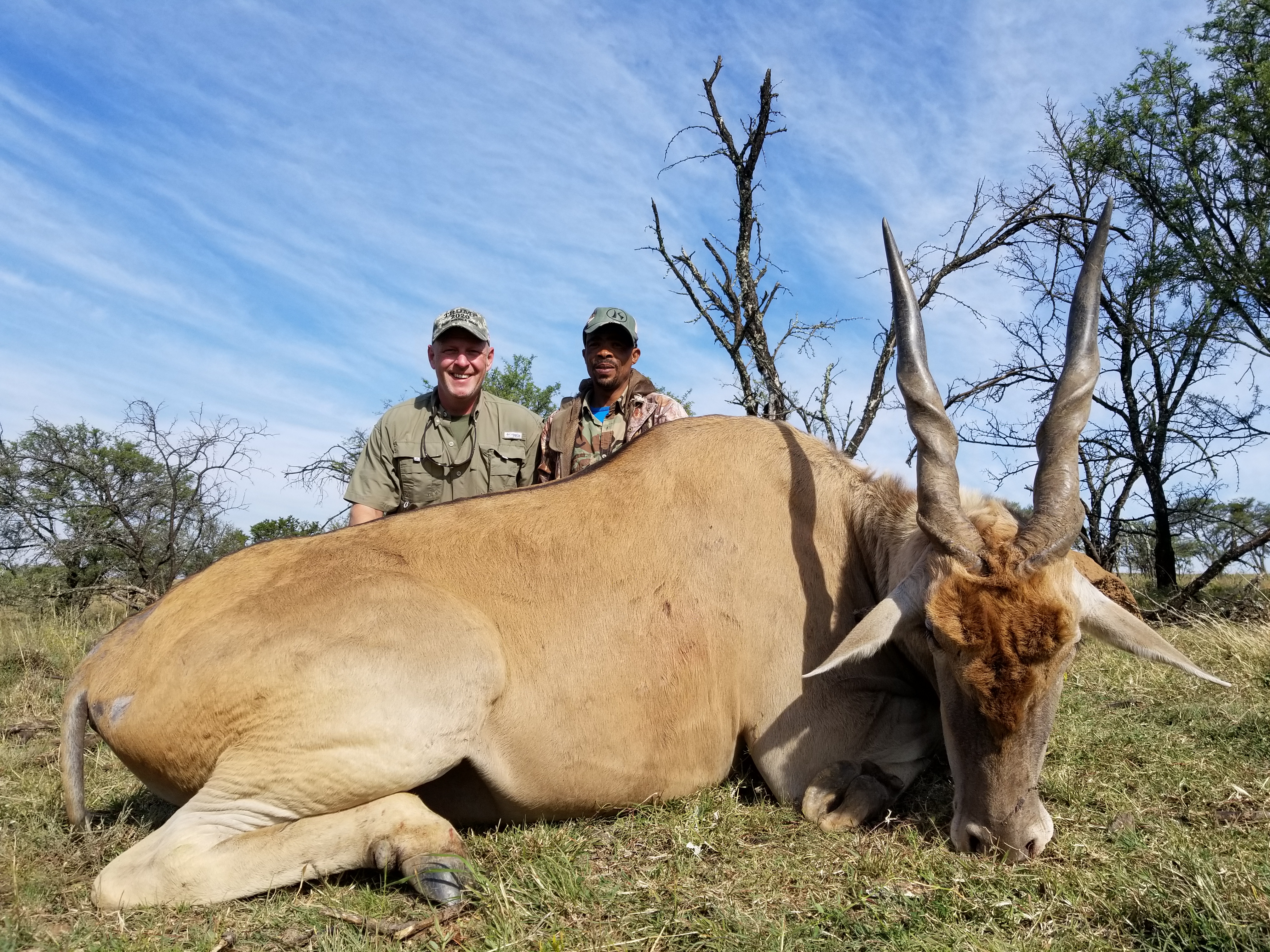 After pictures and a late lunch, we decided to go back up the mountain to glass some of the white blesbok my PH had seen the week before I arrived. We saw several really nice blesbok that afternoon, but it was getting a little late for a stalk before dark so we decided to try them early the following morning.

Early that morning, we hiked to the area that we had seen the rams the night before. They were still in the same area luckily. Without risking them spotting us, we found a nice ledge to set up for a long shot on a big white ram in the group. At 615 yards, one shot and the ram was down. 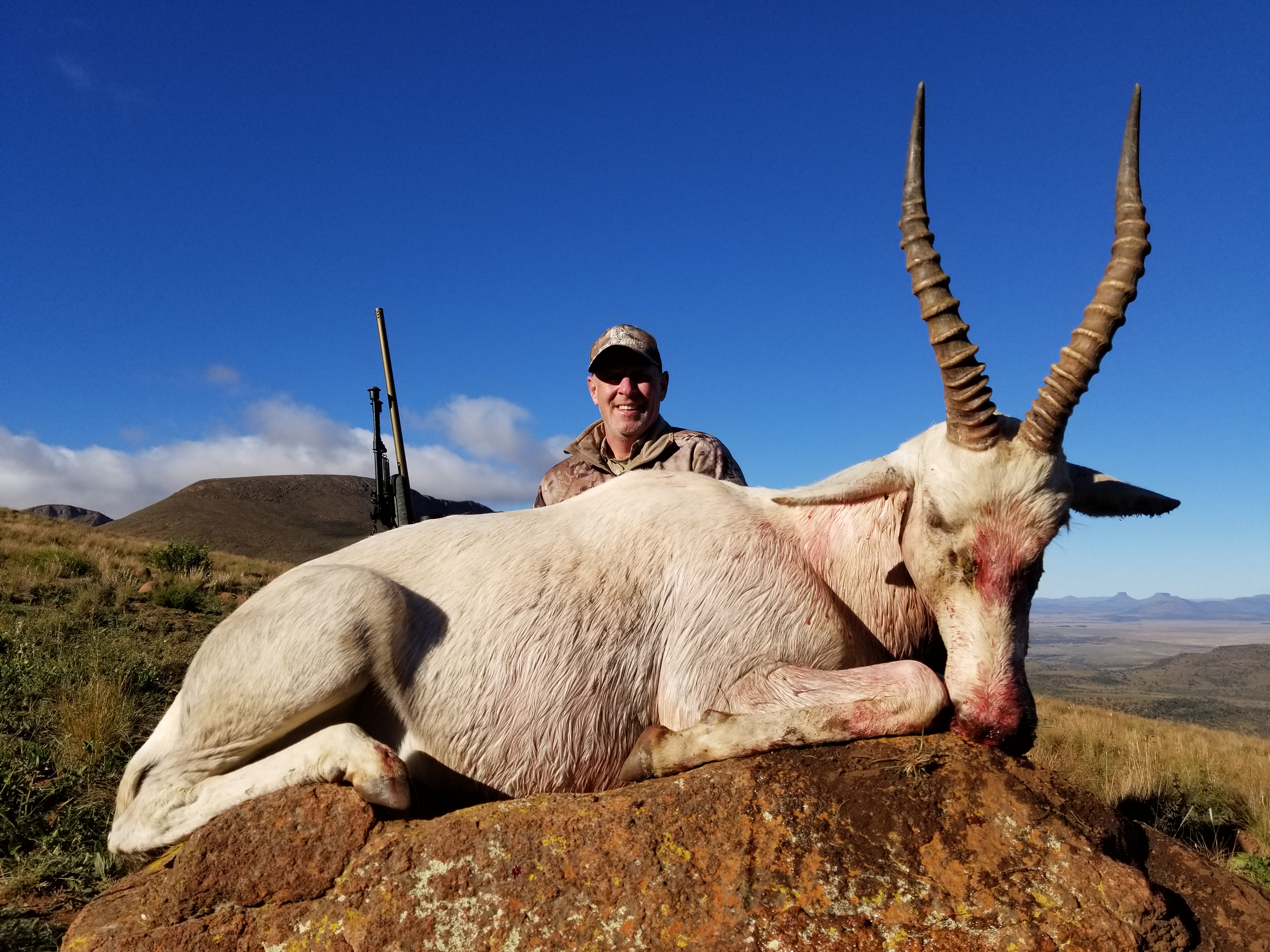 After a nice lunch, I was asked if I would like to help cull a few gemsbok. Gemsbok are one of my favorite animals to hunt, so I couldn't turn down the opportunity. I also wanted a nice skull mount and shoulder mount for my office.

The next morning we decided to go after golden wildebeest. We glassed several groups before finding a nice bull with great color to add to the trophy room. They were in an open flat and very alert which made stalking to get in range a little tough. But, we managed to get within 300 yards of the group. One shot and we were taking pictures of the bull. 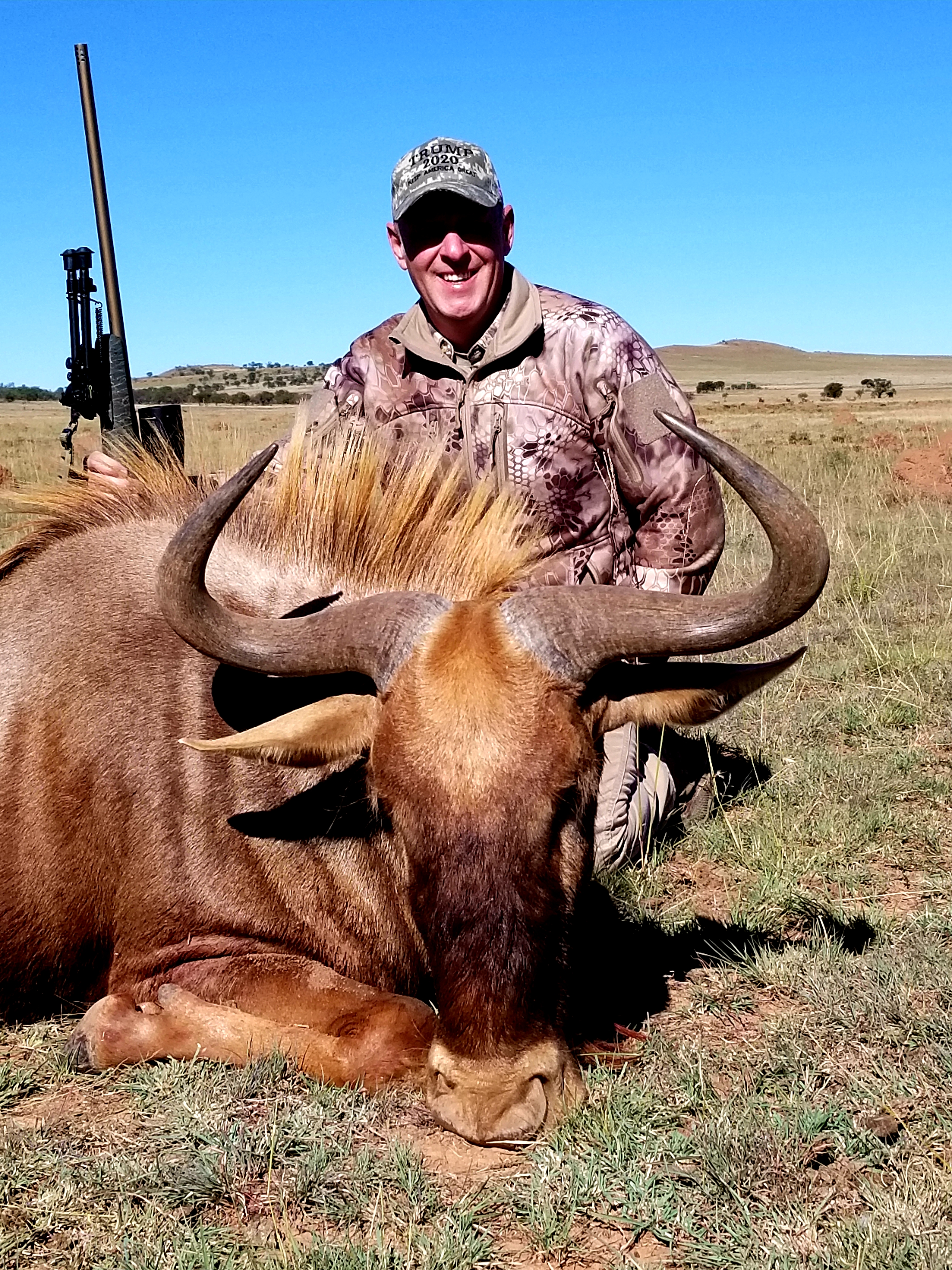 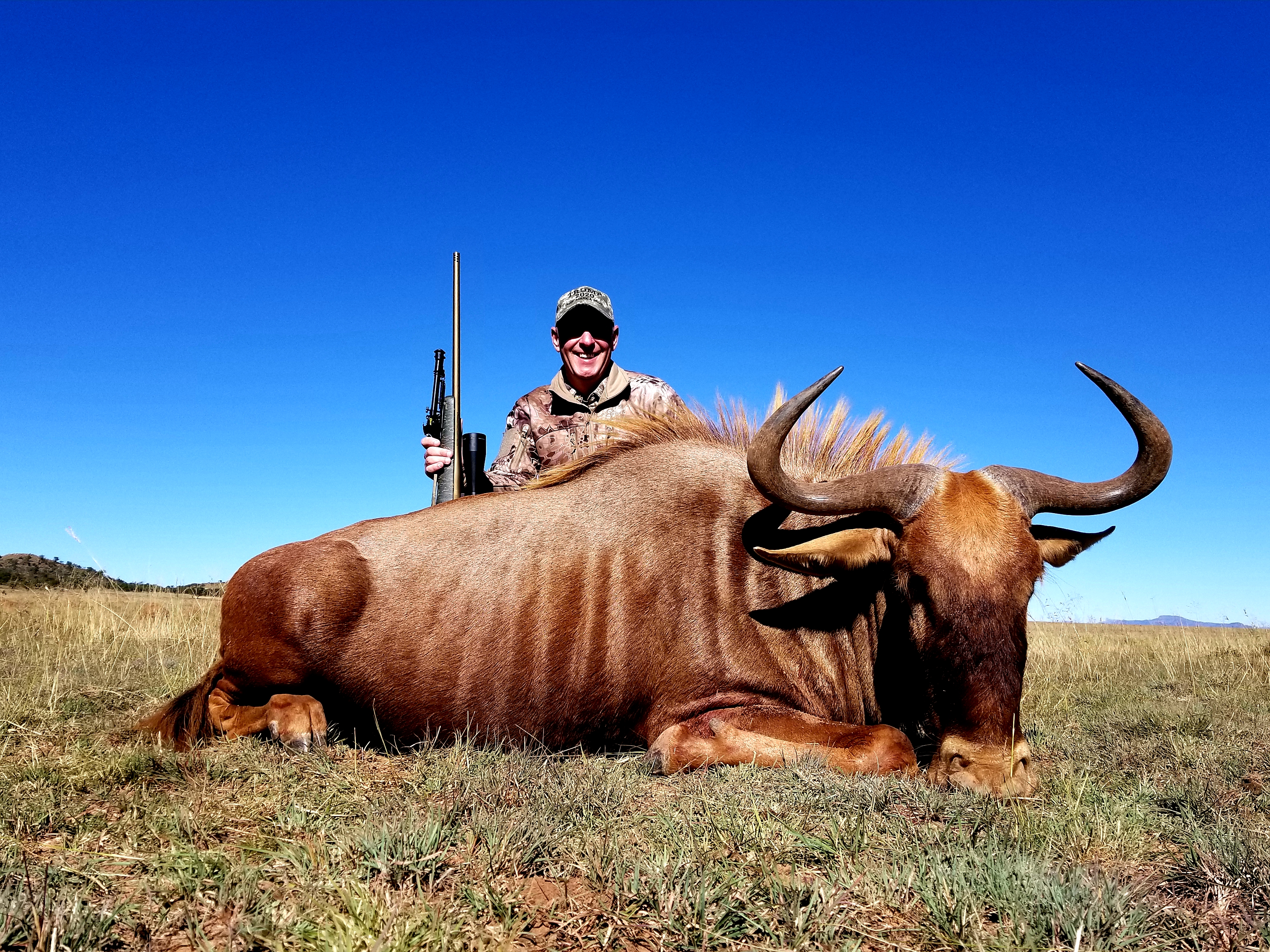 Since the trophy list was completed, we spent the afternoon hunting vervet monkeys. 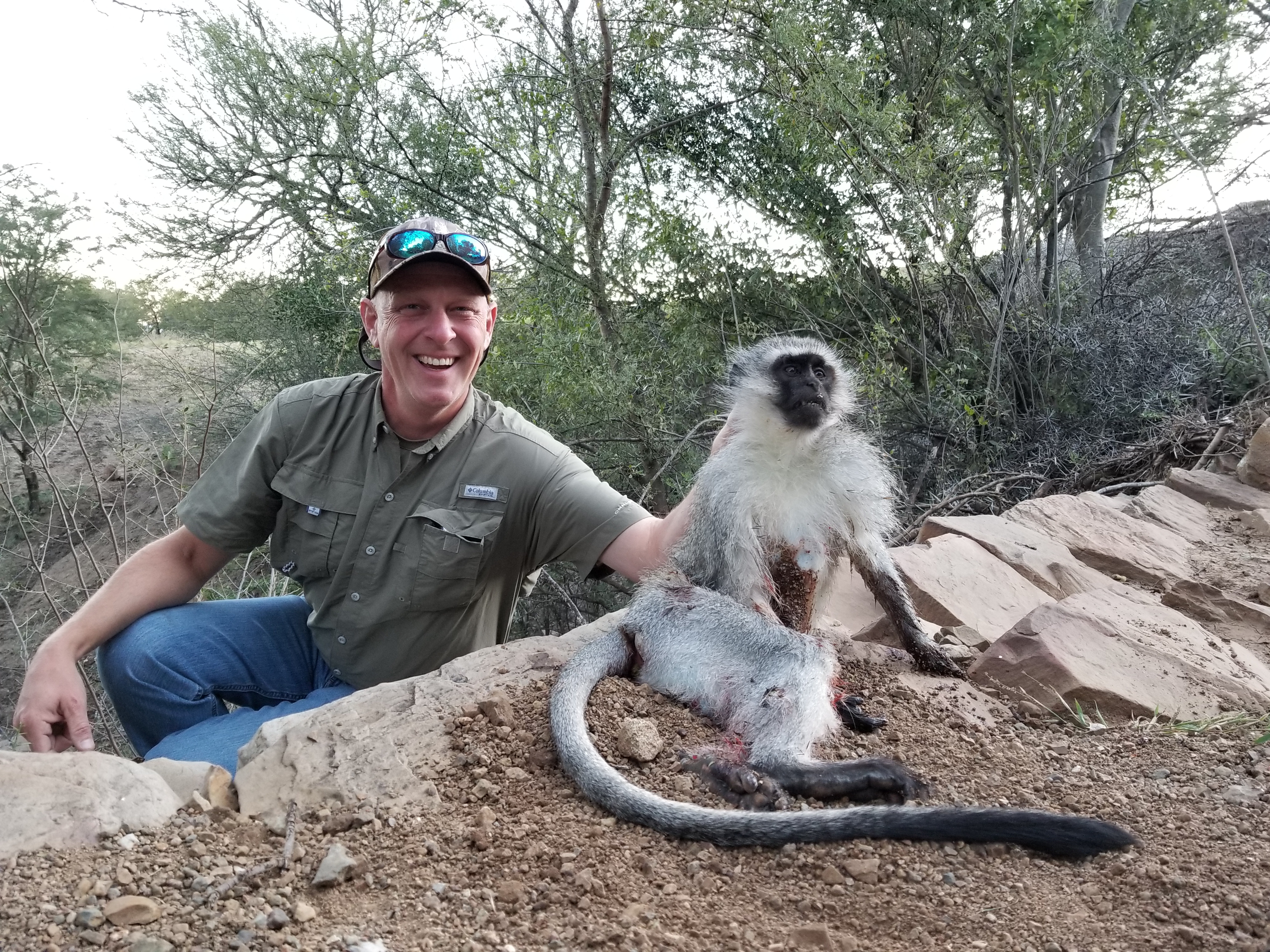 GA Jeremy loved the report and many congrats to some amazing trophies. I really like the look of your Heartbeest and common springbok. Reports like this get me very excited for my hunt with Huntershill in May 2020.
P.S. love the hat

Sounds like you had a great time with HH. Congrats on some nice trophies. That Eland looks very nice.
Bruce

Congrats and thanks for sharing!

Jeremy It was awesome meeting you there, Congrats on another Great hunt hope we can hunt together again. And again Congrats on some Awesome trophies! Bob
Enjoy Life Now! It has an Expiration Date.
You must log in or register to reply here.

SOUTH AFRICA: Family Safari At Huntershill Safaris (If my wife & kids can do it so can yours!)
2 3 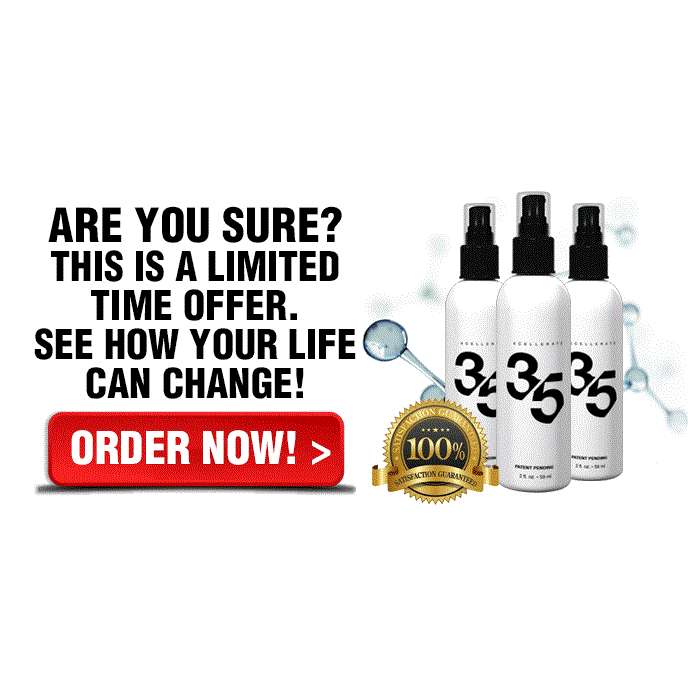