This story started two years ago when I gave chase to the same slippery swine on three separate occasions. Managed to get within 15 or 20 feet of him in a thicket but could not make a positive identification. Gone. Had a group push him out of a thicket but I made the mistake of focusing on the first thing I saw with tusks. Wrong pig. Gone. Every time we glimpsed him in the open all we saw was a straightened tail and a dust trail with tusks sticking out the front. Gone.

Unfortunately our encounters with him led to him reaching minor celebrity status among the PH’s on the property. And yes you guessed it, I was informed approximately 12 months later that my pig had made a mistake. I’m attributing his mistake to old age and obviously diminished senses, otherwise he’d still be there. I’m sure of it.

Now to this year. I was hunting the same property, yet miles from where my last nemesis called home. Not really focused on pigs but like many of us here, they are always in the back of my mind and I will NEVER pass up an opportunity to go after a good one.

Early on this particular morning the chill had just given in to the warming rays of the rising sun. Suddenly out of nowhere I glimpsed tusks out of the corner of my eye. Somehow I kept my cool and only cut my eyes at my PH who acknowledged that he had also seen him. We did the old “drive ‘til he thinks your long gone and stop” trick. Quickly we gathered ourselves and made our move. I’d like to tell you that we stalked him for 4 hours and I made a miraculous running shot at a ridiculous distance but that just ain’t how it happened. We used the wind to our favor on our approach. Amazingly he was still right where we left him. When we first saw him he was still preoccupied with something and unaware. The shuffle of the sticks going up and everyone trying to reposition themselves caused him to turn and face us head on. I hesitated on the trigger because the only shot I had was square in the face. He finally turned his head slightly exposing the corner of his shoulder. Not what I wanted but I didn’t hesitate. Everything felt good at the recoil but he left the scene in one hell of a hurry.

The first bit of sign we found was a piece of bone. Never a good sign. Within another 20 or so yards we found an abundant blood trail that led to my prize. smiles and congratulations all around.

My best pig ever. 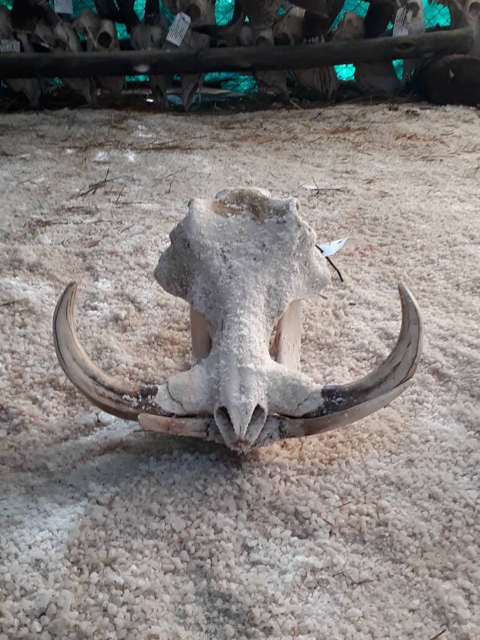 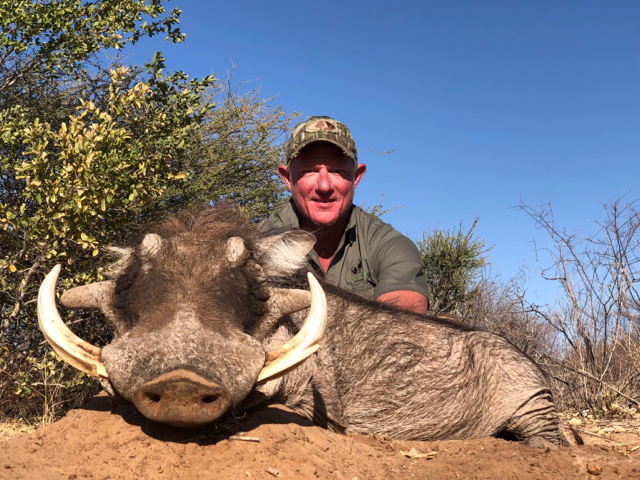 Well done and a great trophy, congratulations. I also suffer from pig fever and cannot pass up any good warthog or bush pig.....

Congrats, that is a great pig !

Great story! Greater ending! And of course a great pig! I am envious of such a fine one!
Africa on my mind.

5 trips for me to RSA, still no warthog, so I feel your pain. Congrats on ending the streak, nice warty!

PHOENIX PHIL said:
5 trips for me to RSA, still no warthog, so I feel your pain. Congrats on ending the streak, nice warty!
Click to expand...

Thanks to all. I killed a decent pig my first time in Africa and have not scored since. This was a long time coming. I told my PH that besides the kudu that I’m obsessed with this was the best animal we could have come across.

Ridgewalker said:
Great story! Greater ending! And of course a great pig! I am envious of such a fine one!
Click to expand...

Good luck on your upcoming trip. Can’t wait to hear about it.

GA Hunter said:
Good luck on your upcoming trip. Can’t wait to hear about it.
Click to expand...

Thanks GA Hunter. Once I’ve taken my prime game, I’m going to look for a warty like yours!
Africa on my mind.

Nice pig GA Hunter, you certainly get some good trophies.

Nice hog. I've been trying for 3 years and no luck. Maybe next year.

I am trying to be happy for you, GA. Really trying. But after 20 years and no decent warthog to my credit, it is a challenge. Thanks for a great story, and congratulations on Jurassic Pork................FWB

That is a dandy pig! Congratulations!

What did you shoot him with?

Tra3 said:
That is a dandy pig! Congratulations!

What did you shoot him with?
Click to expand...

375 H&H which has become my standard for all PG. Admittedly a bit much for my tusked friend but I’ve always said, “ya just cain’t kill ‘em too dead”.

Beautiful warthog!
You must log in or register to reply here.