Our intended animals were Kudu, Wildebeest, Impala. warthog, and general plains game. We were sponsored in part by Henry Repeating Arms, who provided us with their new "Long Ranger" levergun in .308 for my wife and daughters to use. I took the hard way and used a Henry Big Boy steel in 45-70 with iron sights (which I paid for). The Long Ranger was scoped with a Zeiss Terra3x scope, 3-9x42. My intent was to field test these rifles in the worst conditions available and see how they would do. Adding to the mix, one of my daughters in left handed, so I needed a rifle that would accommodate left and right handed shooters. I was not disappointed!!!!!

As always, the worst part of the trip is the flight to Johannesburg. 15 hours non-stop from Kennedy in NYC. But we knew that going in. They have excellent service, and the meals and drinks are all included in the flight.

Chris met us in Jberg, and it was like a reunion with an old friend. Our first trip with Chris was in 2012, and we had a blast then too!! He had a van rented for the 6 of us, and in 4 hours we were at Sabrisa Ranch outside Lephalale, SA. His accommodations are second to none! Rooms are beautiful, with in suite bathrooms, and are appointed as in a 5 star resort! He has pictures at his website, CT-Safaris.com if you don;t believe me!!!! His lovely wife Sabina is the head chef, and every meal was a masterpiece. Sundowners in his boma every evening, and great company made for a truly great, no pressure relaxing hunt.

Arrival day, we did the normal introductions to the staff, and settled in. We sighted in the rifles on his range, and found everything in order. We sat down for sundowners and dinner, and made plans for the hunt. The second PH, Willem Van Rooyen would be arriving in the morning. He is very experienced, and as Lindsay and Taylor found out, very good!!! I am hoping they write their own account!!

Day 1 started at 0600 with a light breakfast, and off we went to check out a couple new areas that Chris hunts. My daughters were instantly amazed with the numbers of game animals we saw!!! I always say that if you don't see 40-50 animal a day in South Africa, you were asleep in the truck!! Our tracker, Samson (Sammy) was incredible! His eyesight and instinct are indicative of ton of experience, and his wit and laughter were entertaining to say the least! I wish he could come back here to Maine and hunt with me here!!
We did alot of driving and spotting, and a few stalks to no avail until the afternoon. At a water course near Chris's base, a short stalk and some great shooting by my daughter Kate ended with a nice warthog! In the truck it went! We drove around some more, but nothing until we got back to home. As the light was waning, Sammy came running in telling Chris about a nice old Kudu bull that was close by!!! We gathered ourselves as quickly as possible and into the truck we went! A short drive and a short stalk later, and my lovely bride of 30 years shot a nice old bull!! 1 shot with the .308 at 40 yards. It piled up within 40 yards as well!! What a first day!

Day 2 was supposed to be early, but someone did not set an alarm! Cold morning (not by Maine standards) but 42F. We headed out in search of more plains game on 2 different properties. My daughter Stephanie ended up with a short stalk and a nice Impala in the truck! She also got introduced to "war Paint" as Chris anointed her into the big game hunting fraternity! We saw tons of animals again, and had just a fantastic day.

Day 3 started with a trip to a property near Botswana owned by a man we met on our last safari, Anton. A lifelong farmer, he is just a fantastic guy, great tracker and funny! He remembered us immediately and again it was old friends getting back together. We soon spotted a nice Impala for Kate, and again after a short stalk,it was in the truck! The .308 was just the trick again. 1 shot and it went 25 feet before piling up. SO off we go again, and now a random Ostrich comes into view. Steph immediately decides that she would trade a warthog for an Ostrich (for a small fee) and off we go on an Ostrich hunt! Ostrich are hard to kill, but after taking a couple hits from the 308 and the 45-70, it too was in the truck! Anton's property is huge! and a nice ostrich!

Day 4 was dad's day for a wildebeest. I had hunted for one in 2012, but never got one. I waited 6 years for it, and once again Anton's property was the intended hunt. He joined us, and off we went. We spotted them within an hour, and the hunt was on. The wind was not our friend. In spite of our best skills, we could not get close, but we had seen a great bull, and we kept on him. The shot was long, and completely on me. I wanted to stalk up with the 45-70, but we could not get close enough, so I switched to the .308. The gun went click on the first try. Too much sand prevented the action from going into battery. I racked the action and took a frontal shot at 170 yards. It was not what I would call good. Not centered, and I apparently missed the vitals. Anyone who has ever hunted knows the feeling of a bad shot. If you haven't, you will at some point. I have been hunting for 37 years,and I am a gunsmith and an avid shooter. I own a small shop and practice shooting every chance I get. Still, I am human, and this was a hurried shot, and not my best. Off on the track we went, and after 2 hours, the track was growing cold. But due entirely to the skills and eyesight of Chris, he somehow spotted the wildebeest at 100 yards, lying down. We approached to within 80 yards, and Chris, Sammy and Anton were studying the bull to make sure it was the right one. It saw us, and the wind was from behind us, so it could smell us as well. The bull never budged. Finally, it had had enough of us, and went to stand, at which point Anton and Chris confirmed that it was the bull I had hit. A .308 to the shoulder put it back down. The absolute relief was overwhelming! We came back to reality very quickly, as the bull tried to get up again. This time a 45-70 and a .308 shot anchored him for good. They say that African game is tough. They are correct. But the celebration was on, and the bull was in the truck!

I cannot say enough abut Chris Troskie and his Safari operation. He is a truly wonderful host, a fantastic hunter, and a great friend. You cannot go wrong with a package from him, or tailor your hunt to your desires. You can call me in the US at 207-229-9898 if you have questions about this hunt or about anything you would like to know about Chris Troskie Safaris Africa! I do not work for him, and I do not get any form of compensation from him. I paid full price for this trip out of pocket, and the only compensation I got was the .308 from Henry. Just so you know! 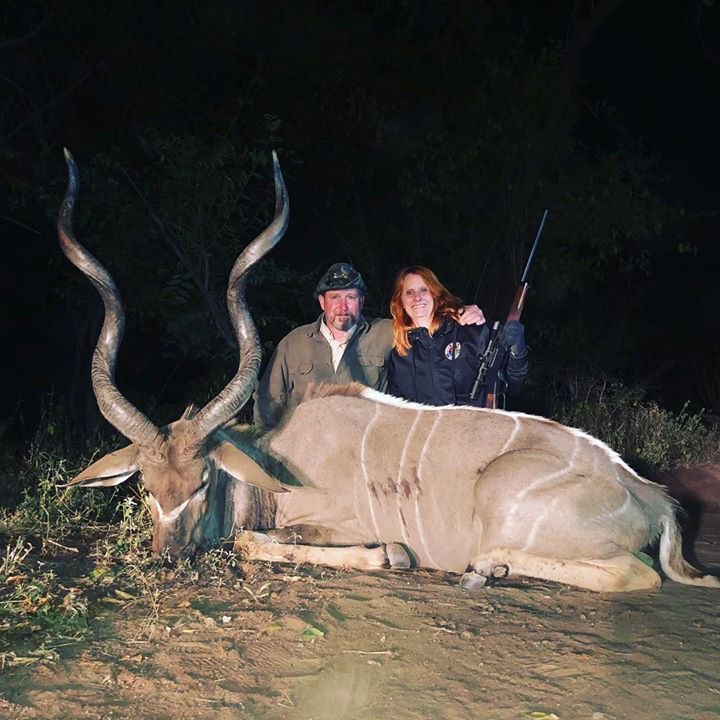 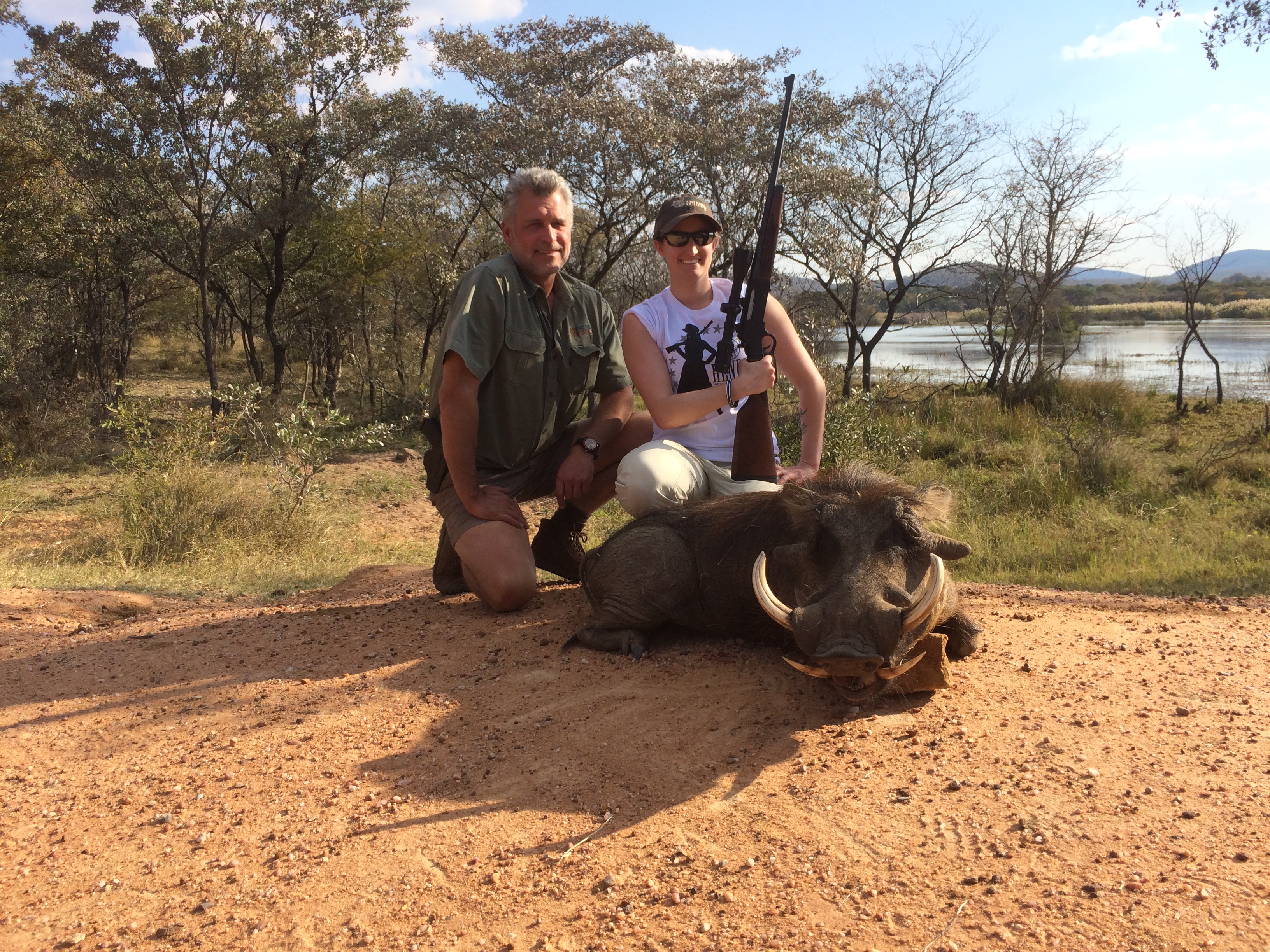 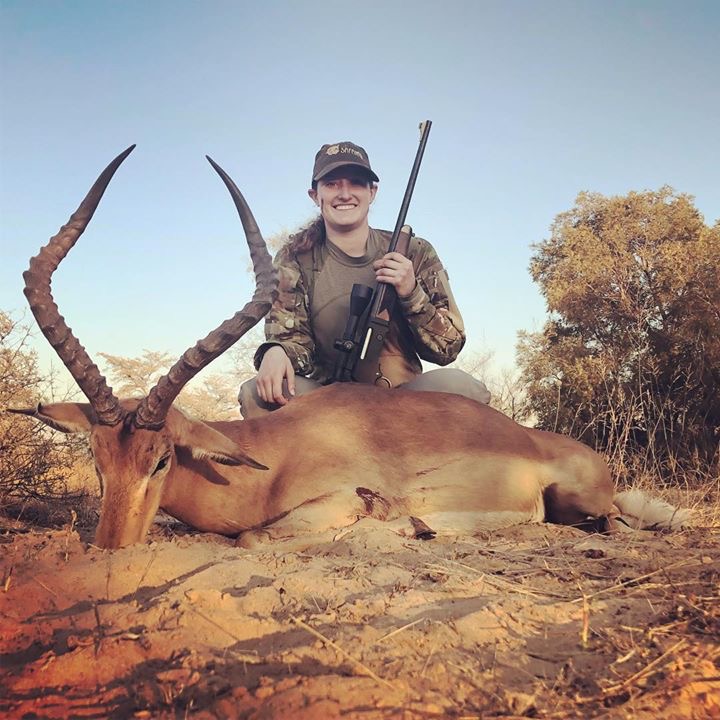 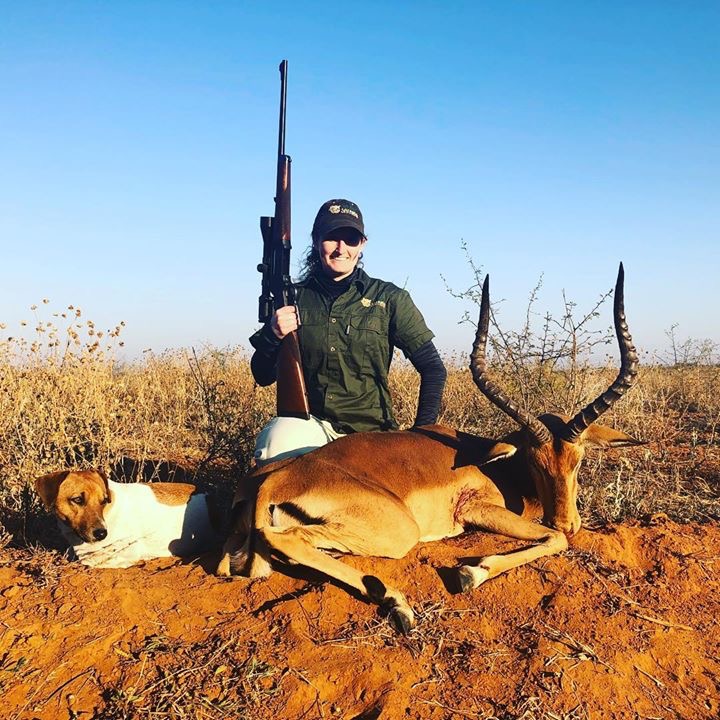 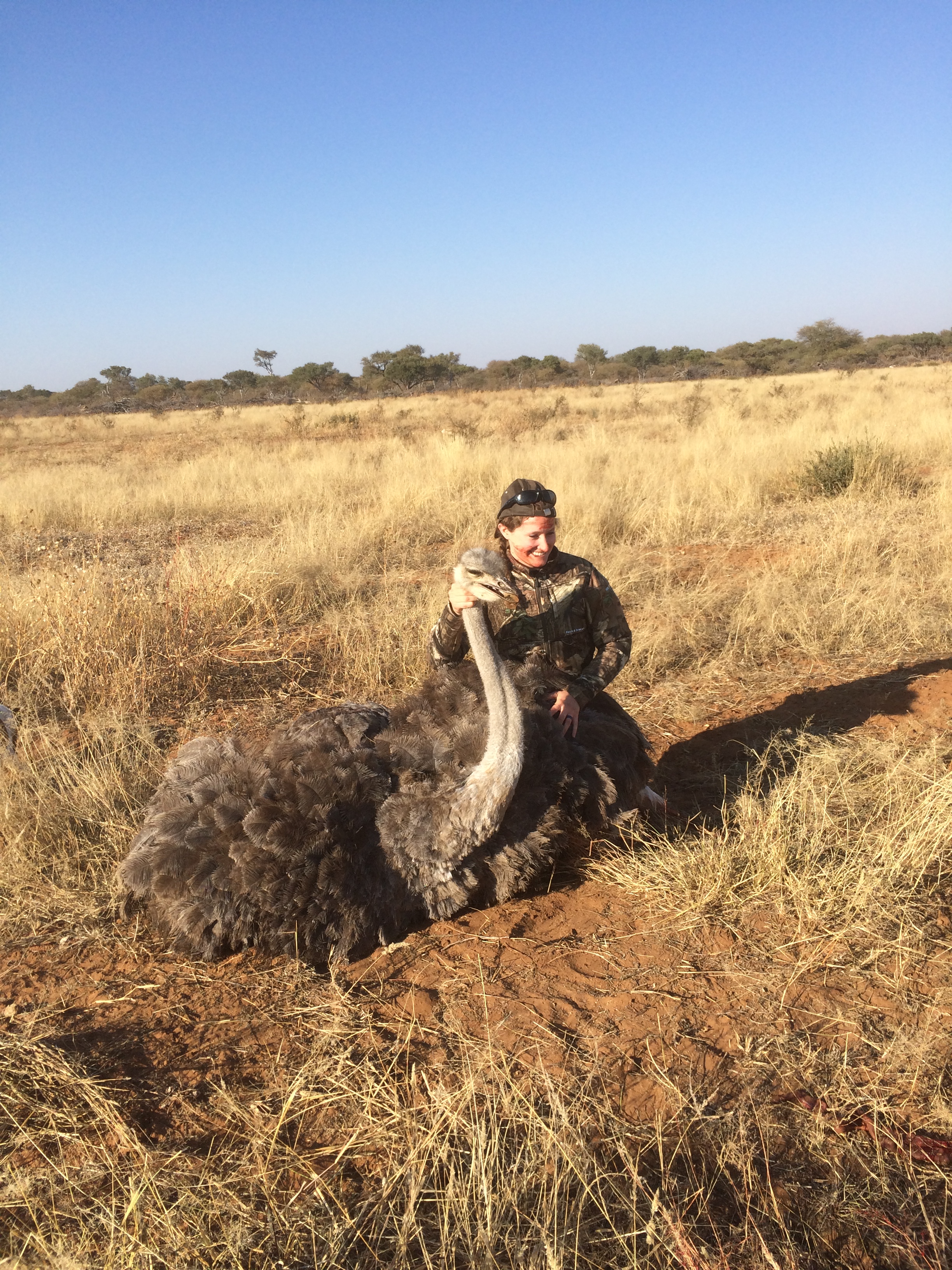 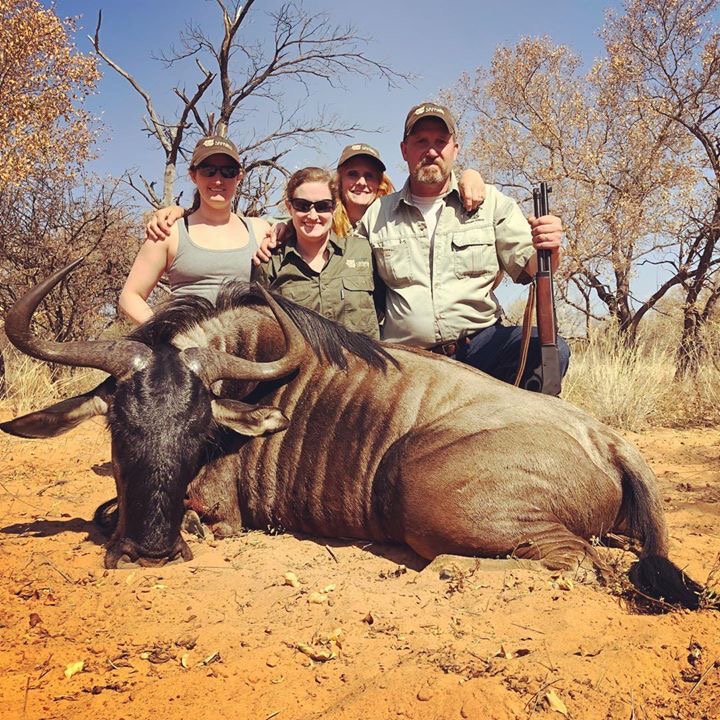 Fantastic kudu! I hope to find one like that this time next year with Chris.

Congrats on your hunt, seems like the whole family enjoyed it !

Great hunt! I love lever guns. That Long Ranger interests me as my favourite rifle is my Browning BLR. I'll have to look them up. Blue Wildebeest is not on my list for my upcoming hunt, but the more I see them, the more I want one!
"I don't need to shoot farther...I need to hunt closer." - G. Sitton

Great family hunt, with lever guns, no less. Sounds like a blast!

Some nice trophies all around

I'm Very Jealous, You and your family got to eat Sabina's Cooking,,nice trophies also
Be Yourself Everyone Else Is Taken

Thanks for the report! Congrats and I'm glad y'all all had such a great time. I'm a lever gun fan, too. Ragman, blue wildebeest is one of my favorite antelope to hunt, makes a great trophy, and is wonderful on the table. I recommend you hunt one if you can.
Last edited: Jul 4, 2018
You must log in or register to reply here.