After arrival in Port Elizabeth, we settled into camp and had a chance for the hunters to familiarize themselves with our rifles at the range. Chris hunted with my 7x64 Brenneke, Keith chose to use my 270 Winchester.

Lindsay served a dinner of springbok shanks, veg and malva pudding. We turned in early that evening, the excitement of an 8 day hunting safari lay ahead of us.

The first morning was epic. We were on a hill above a bachelor herd of impala rams. Chris made a one shot kill, first impala ram down. The shot echoed off the hill confusing the impala. They ran a short distance and hesitated. Keith acted quickly and got in on the act, also making a one shot kill. This was one of the few "one stalk - two kills" I've guided and it happened in an instant

That afternoon we searched the waterholes for fresh zebra tracks. We found tracks that led up a large mountain. In the dry, winter conditions, they were grazing high and coming down to the plains to water in the early evenings. 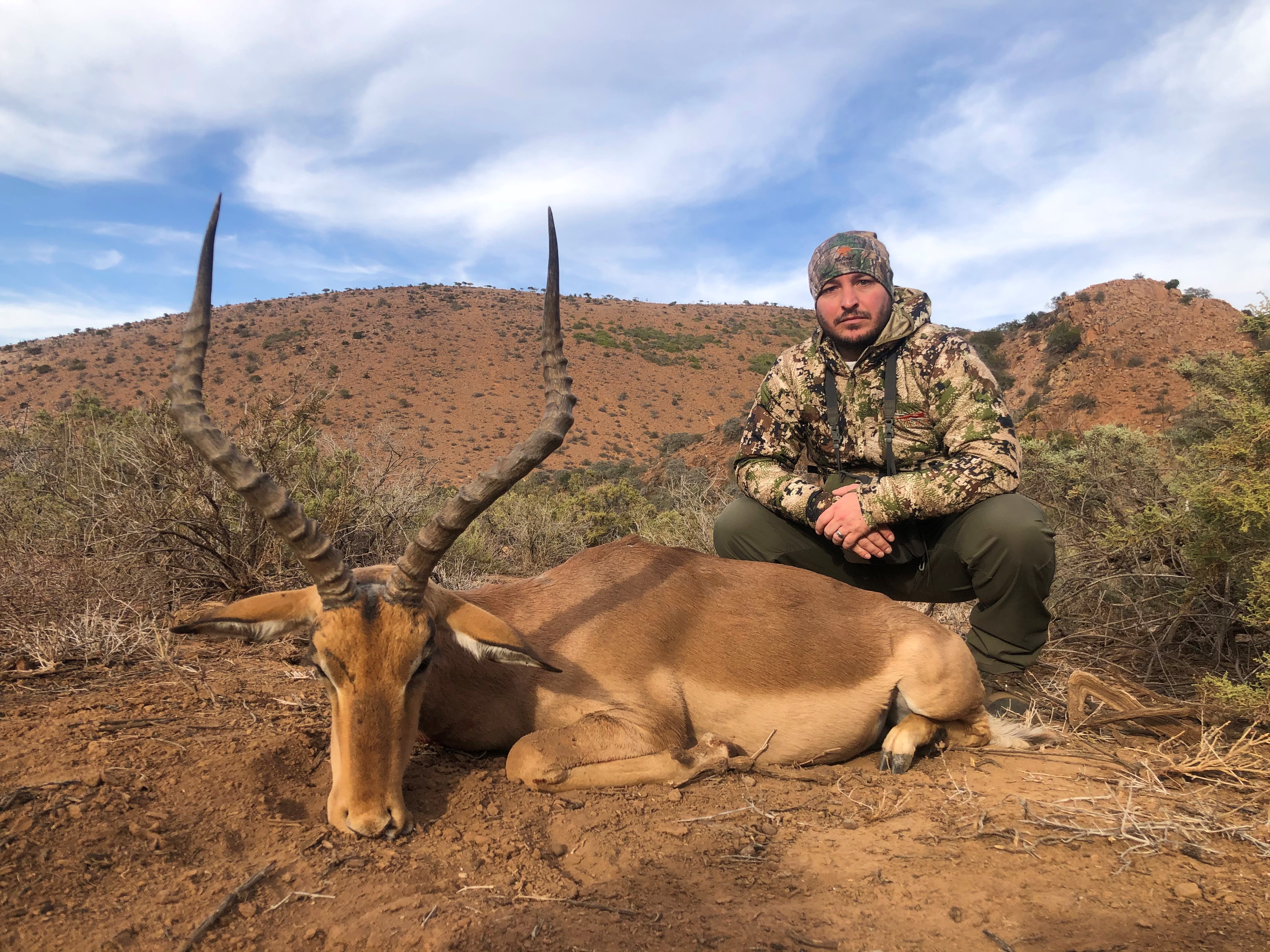 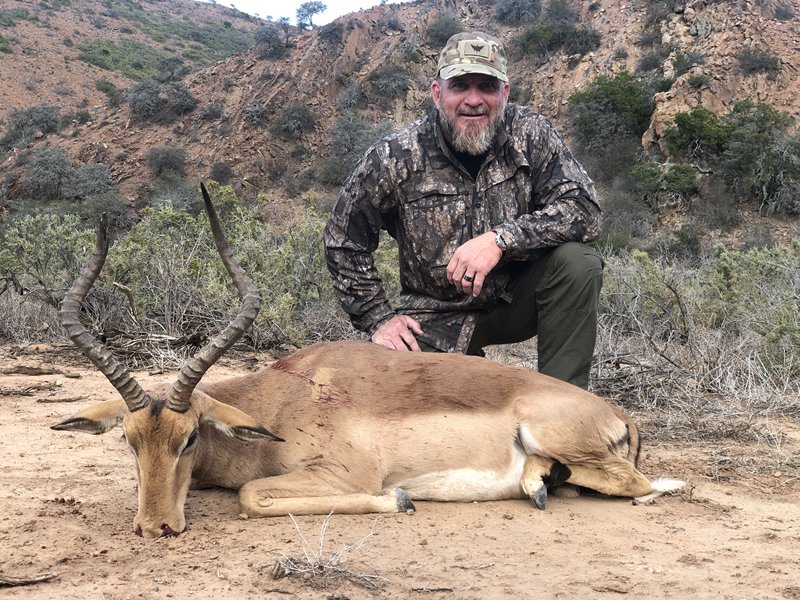 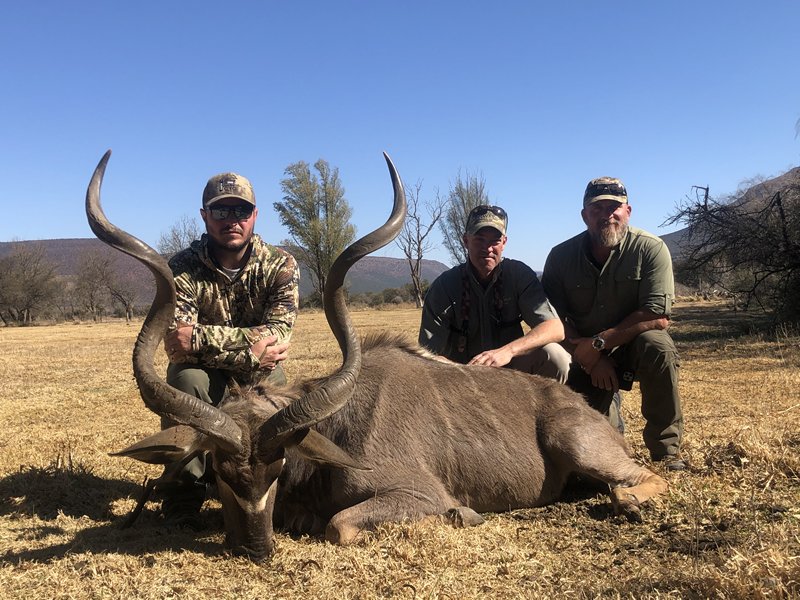 We split up in the morning. Mitchell and Keith hunted together and Chris and I headed in the opposite direction. Chris and I saw some springbok grazing in the distance. We were closing in on the final part of our stalk, a mere 200 meters left when Keith's shot echoed in the distance. The springbok spooked and fled. Mitchell confirmed via the two way radio that Keith had stalked and shot a beautiful springbok ram. Chris and I continued on our hunt and after a few busted stalks were able to get a rather long shot on a ram. The shot hit low and the wounded springbok fled over a rise. We pursued him and Chris was able to put the springbok ram down with a 2nd shot.

The hunting day was far from over and after a lunch of kudu burgers and fries, we again split up into two groups. Chris and I set off on foot. We had our eye on a magnificent kudu bull that we could see was about to emerge from some thick brush. Keith and Mitchell set off in the hunting vehicle to glass a different area. Our stalk got intense. We lost sight of the kudu for long periods while we moved closer and we were soon wthin 150 yards. We got a glimpse of the bull briefly but each time our bullet path was obscured by brush. At one stage, Chris had the smallest shot opportunity but wisely decided not to shoot. Although he later voiced his regret, he made the correct decision. There would be other, more definitive opportunities.

Kudu hunting luck was with Keith that day. Shortly after parting ways with us, they spotted a large trophy kudu bull. A short stalk later, Keith made an 80 yard shot to bag the kudu bull of his African hunting dreams. His kudu picture which he promptly forwarded me is one of my favourite of the 2021 season! 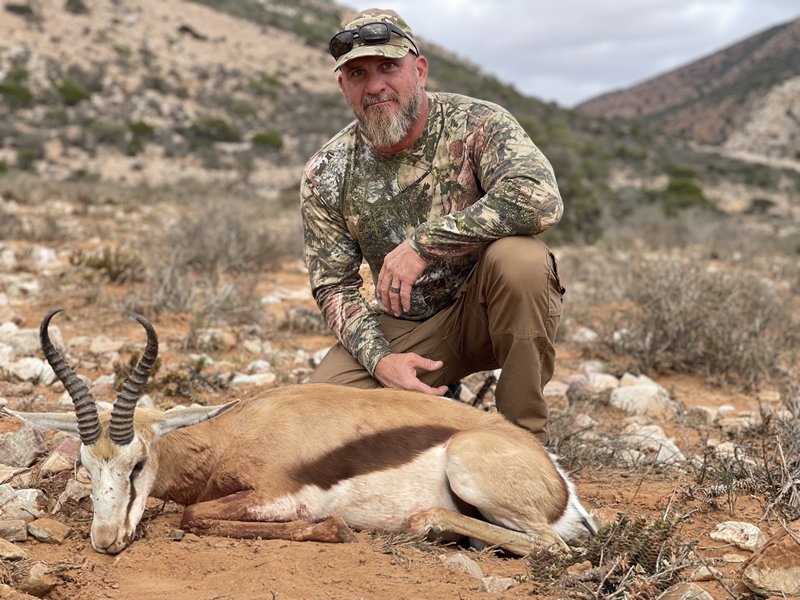 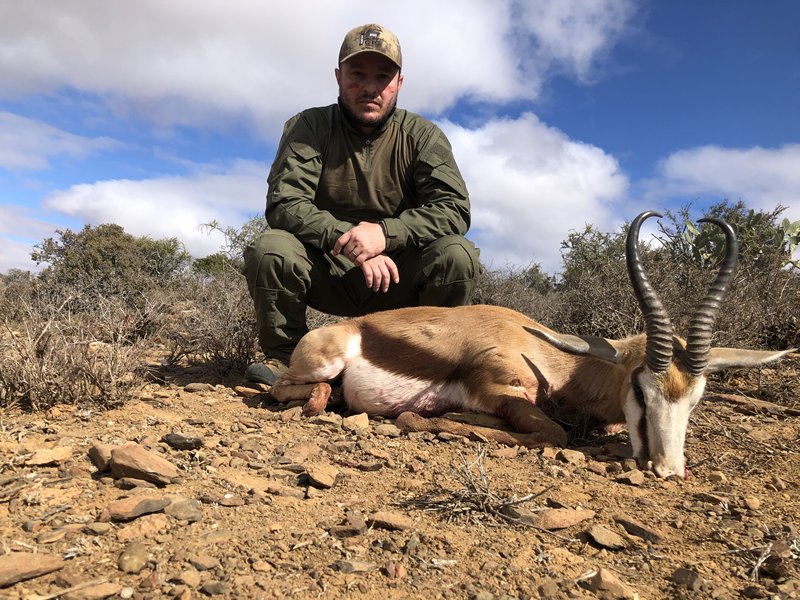 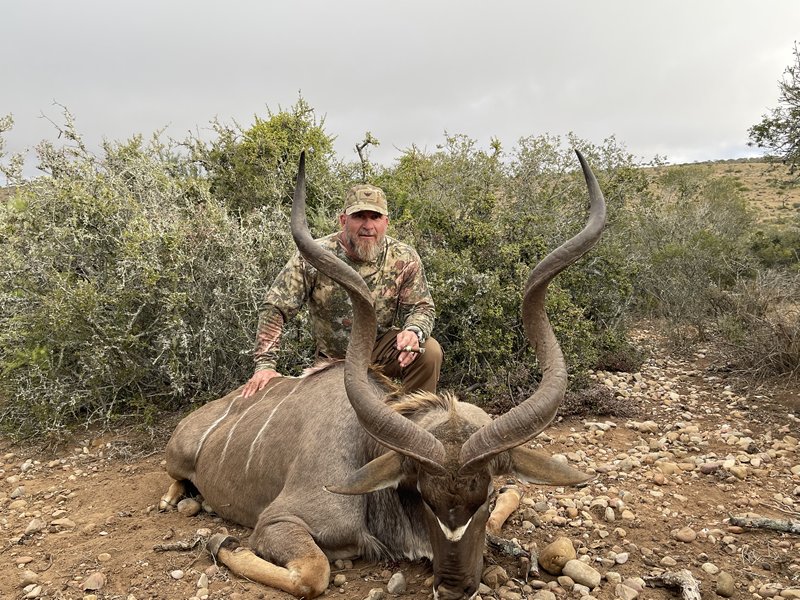 Not too early the next morning...we set out in search for a kudu for Chris. We'd missed out on an opportunity the evening before and were hoping to connect with another big kudu bull. We glassed an area of valley bushveld and spotted a herd of kudu, a lone kudu bull lurking in the shadows on the edge of the cows. Given the thick cover, we knew it would be a manageable stalk but getting a clear shot would be difficult. We got within 120 yards but were unable to get a decent shot opportunity before the cows barked and the entire herd disappeared into the thicket.

We were on the hunt for kudu again. It was a blustering day. We spotted several good bulls but they were nervous in the shifting wind and getting close was a challenge. Just before midday we spotted a herd of eland crossing an open plain. After lunch, they'd moved into an area of thicker vegetation allowing us to stalk closer. As we approached, we could hear the sound of them browsing, twisting and breaking the vegetation with their horns. We caught up to them as they were disappearing into thicker bush. A large eland bull paused momentarily and glanced back, perhaps alerted by some sixth sense. The bullet from Chris's 7x64 gave a hard thud as the bull rocked back onto his hindquarters. He stood up and stumbled a few paces before Chris sent a second follow up shot. Chris had accepted what Africa offered him and his kudu disappointment was soon forgotten. 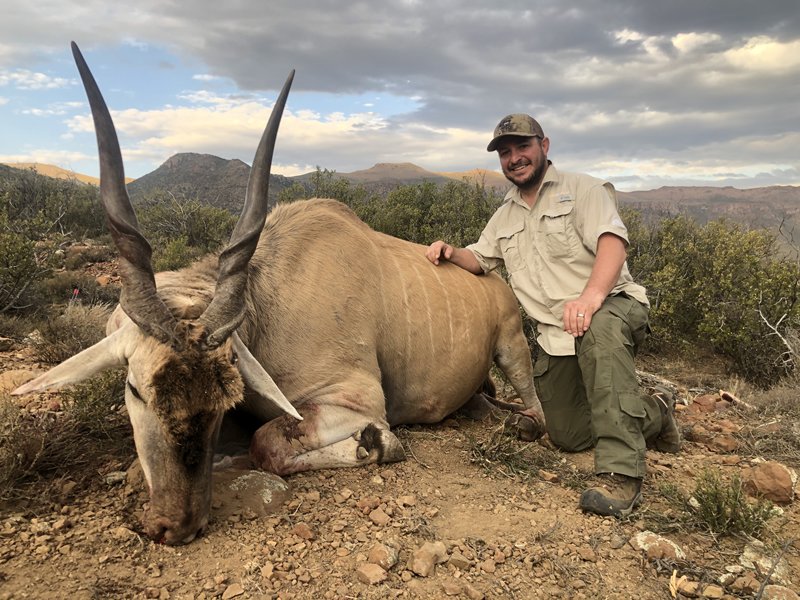 Occasionally when hunting Africa, a hunteris gifted a day when all plans lead to hunting reward. This was such a day. We knew the zebra were grazing high in the mountains, probably enjoying the long grass just below the occasional snow line. Our ascent up the mountain was a tricky one, low range with some sharp hair pin bends. Occasionally we stopped to enjoy the views and assess the line the vehicle should take around the sharp corners. We left the vehicle just below a wide plateau and continued on foot. The grass was long and lush and we saw fresh zebra tracks crossing the road in places. It took a long hike along the edge of the 6000 ft plateau before we spotted zebra laying down 700 yards away. We watched them for awhile before we moved laterally behind a small undulation. 200 yards out and we set Keith up on the sticks, the wind was howling and standing straight up was difficult! Keith's first shot was true. The small herd of zebra ran right at us and Keith fired a second shot for good measure. The herd blew 50 yards by us and then stopped and turned, confused by the events of the past 30 seconds. Anticipating a second "two-for", Chris had already set up and his shot put a second zebra down. It was beautiful hunting day and the views from the plateau were phenomenal. We waited for help loading the zebra and drove carefully down the mountain. Earlier in the morning, we'd spotted a gemsbok bull. He'd disappeared in the thick riverine shrub. With a height advantage now, we spotted him still languishing in an open area on the edge of the thicket. We put in a stalk and after a few moments waiting for the perfect, broadside shot, the gemsbok bull obliged. Keith's shot split the gemsbok's heart in two perfect halves.

We spent the afternoon hunting kudu and were presented with a close up sighting of a herd of elephant. 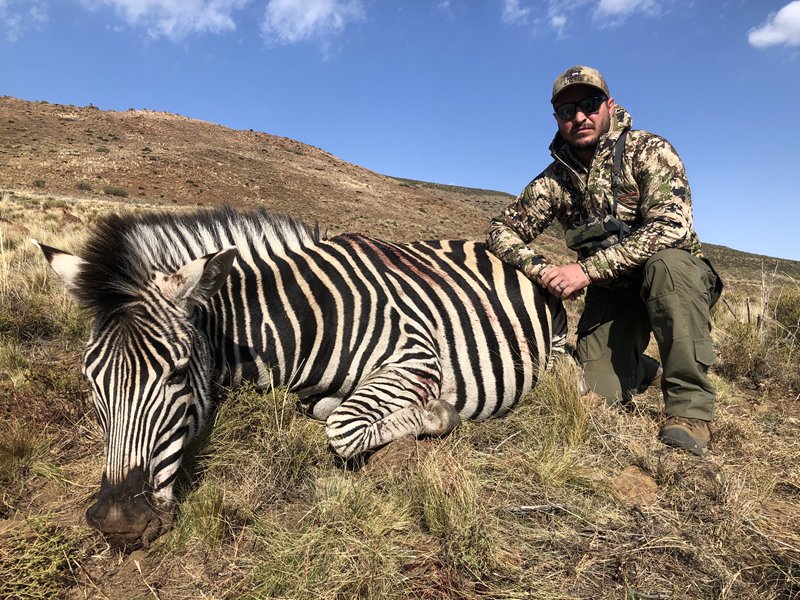 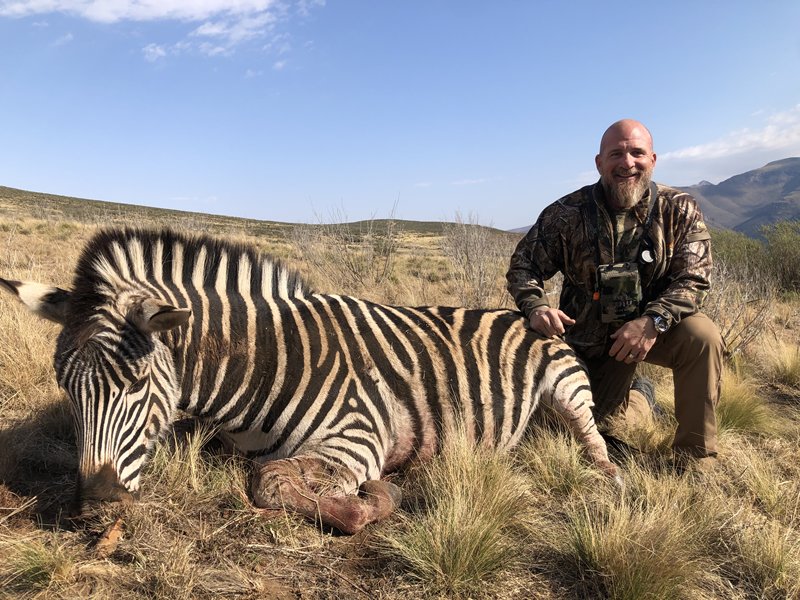 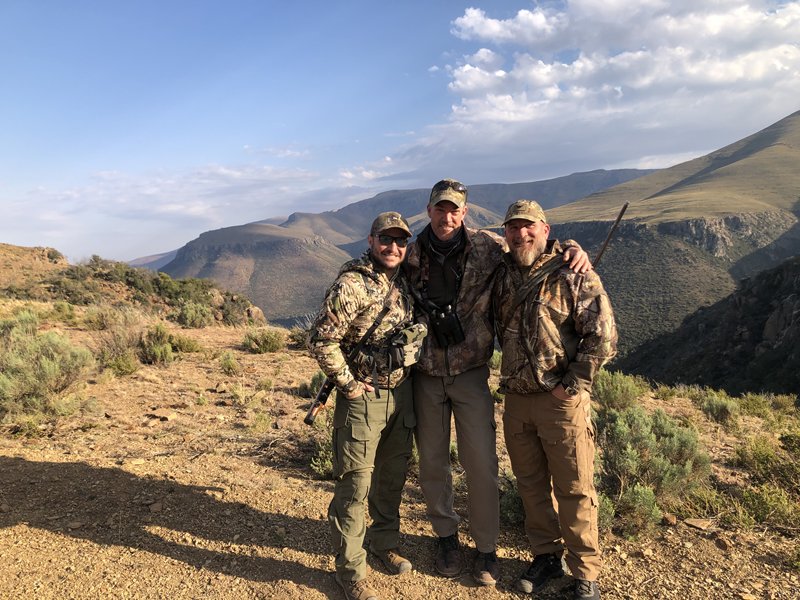 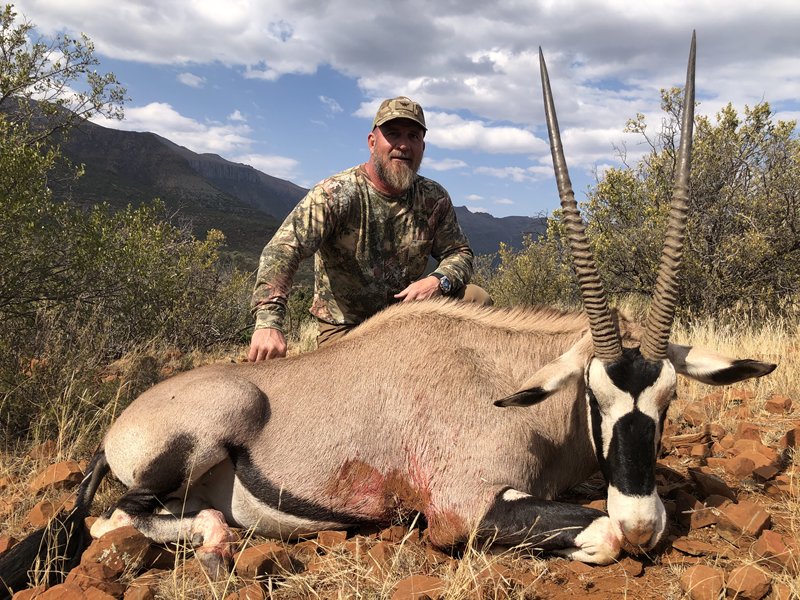 The real stroke of fortune happened at lunchtime the following day. It was an uncharacteristically warm day for the month August and while Chris and Keith were resting after lunch, I spotted a dozen warthogs or more grazing in an open field near the lodge. There was a large tusked boar among them. I hurried back to the lodge to fetch the hunters. When we returned, the warthogs had shifted positions and I was looking through my binoculars when Chris grabbed me by my shirt frantically. I ignored him for a second, intent in my purpose of finding the boar again when he hissed at me - "kudu!!". That got my attention. Out of the brush 30 yards to our left, emerged a glorious kudu bull. It was frantic, we were too close and there was a lot of brush in our way. Luckily the kudu hadn't seen us and merely ambled into a nearby thicket. We moved clear of the brush and stalked closer. We couldn't see him now but had a clear view of the thicket. What seemed like an eternity later, he emerged beyond the thicket. He was walking diagonally away from us. Chris wasn't going to wait for the perfect shot this time and he fired. There was a sharp thud and the bull seemed to wince. He struggled into the next thicket before Chris could fire again. Once again we moved to get clear a clearer view. I studied the thicket more intently and could make out the profile of the kudu, swaying slowly. Chris fired again, this time through the brush and the bull went down. An old bull with a magnificent set of horns.

It was the last day of the hunt and we spent it in camp. It had been a glorious hunt, full of suspenseful stalks and hunting adventure. A massive thank you to Chris and Keith for their great companionship. Hope to see our new friends in Africa again next year! 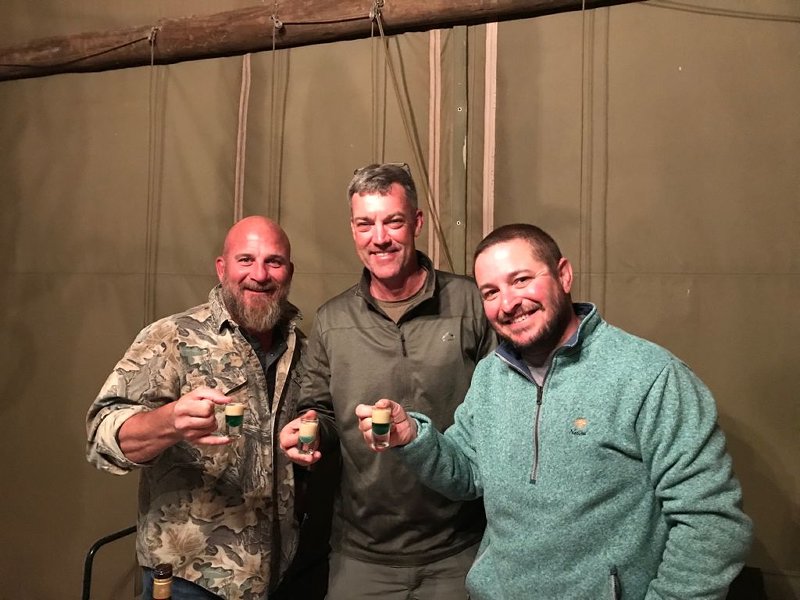 @KAROO WILD Safaris
Thank you for sharing. Great trophies you got there.
Congratulations to you and the hunters.

Congrats to all and thanks for sharing!
John 3:16

Your hunters did well. Congrats on a fine hunt.
Bruce

Well done, congratulations to all. Thanks for posting

Excellent. Thanks for sharing.
J

You write excellent reports. I hope to be the subject of one, one day!

Congrats and thanks for posting the hunt!
You must log in or register to reply here.