SOUTH AFRICA: My Report On Our Recent Family Hunt With Shumba Safaris

Weather: A bit changeable, but we hunted every day.

My family (wife, son, daughter and myself) hunted with Mel for 5 days.
Mel and his wife Leona, couldn't have done more to make our stay more enjoyable. 4 people in camp at once, all hunting together, wasn't a problem. There was plenty of food, and as usual the hospitality was first rate.

Having 3 first time hunter to deal with didn't faze Mel in the slightest. His calm manner when setting up for a shot helped to relax the first timers enough that all 3 of them made good shots on all the animals. Maddi and Denise had never killed anything bigger than an ant prior to our trip.

Our first hunting day was spent looking for the ever elusive Cape Bushbuck and Cape Grysbok. Sunset found us with no shots fired, but an enjoyable day was had by all.

The afternoon of day two was spent hunting Blesbok in the Karoo. Denise made a perfect shot on nice Blesbok ram, her first African, and first ever trophy. 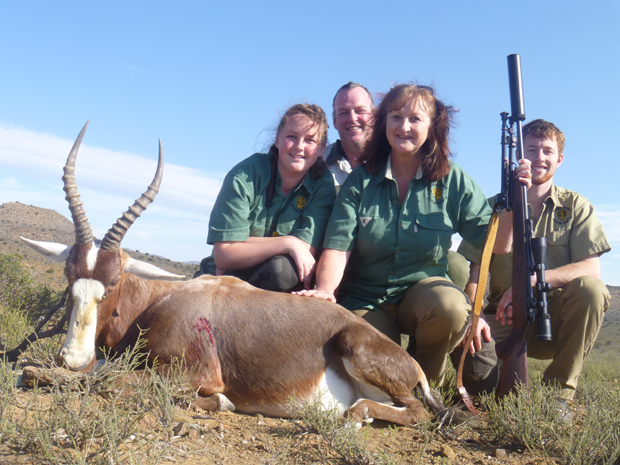 That afternoon, Maddi was on the sticks no less than three times trying to get a shot at a very clever Blesbok ram. The ram won the day.

Dawn on day three bought a change in the weather, with very cold wind and some rain. Maddi continued where she left off the previous afternoon. A long shot in the wind and a brisk walk through the Karoo landscape for her brother and Mel got her a finishing shot on a nice, old Blesbok ram. 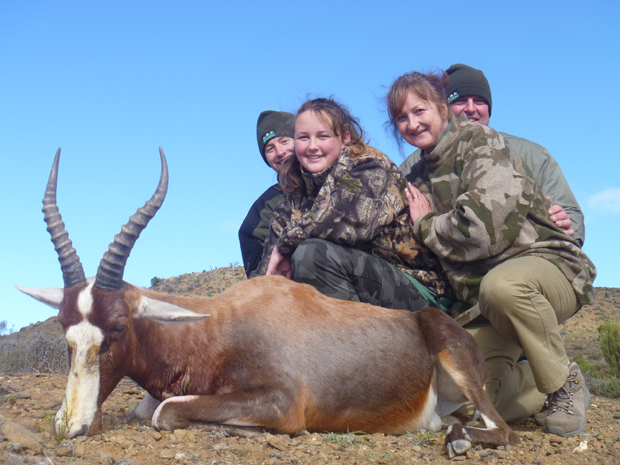 After some lunch, it was Josh's turn to hunt. A long stalk and some clever manoeuvring on Mel's part got Josh onto a good Springbok ram. A short time later, the ram was on the ground. As we approached him, he got up and tried to run, testament to the toughness of the African wildlife. Due to technical issues with the rifle Josh was using, I finally got in on the act, securing the ram with a running shot from my 30/06. 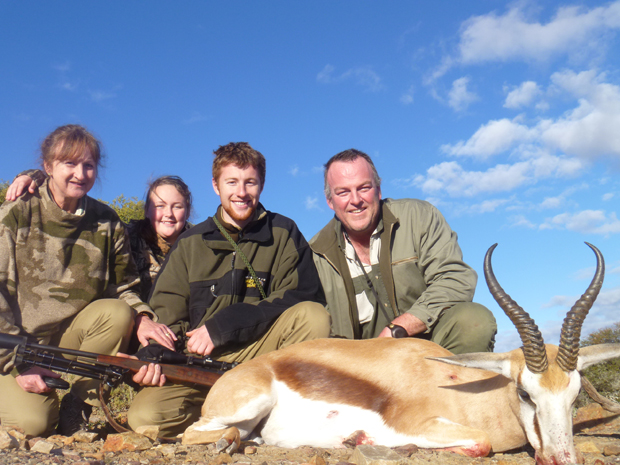 More foul weather came in during the night, rendering the morning of day 4 less than ideal for hunting. But hunt we did. A large herd of Blesbok was spotted on the side of a hill, Josh and Mel stalked the herd. A couple of shots later, Josh had a nice Blesbok ram on the ground. 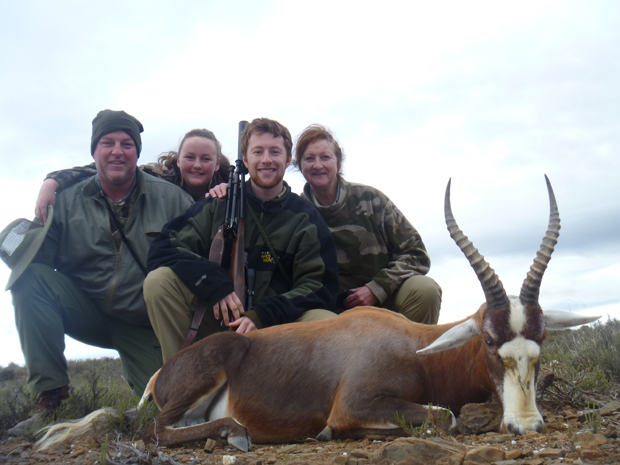 The last day of our hunt showed better promise weather wise, so a lunch was packed and we headed to a hunting area that Shumba Safaris have exclusive access to. Maddi's luck changed late morning, with a very nice Impala ram being located. A stalk and a very good 225 metre shot later, she was standing next to her long awaited Impala. 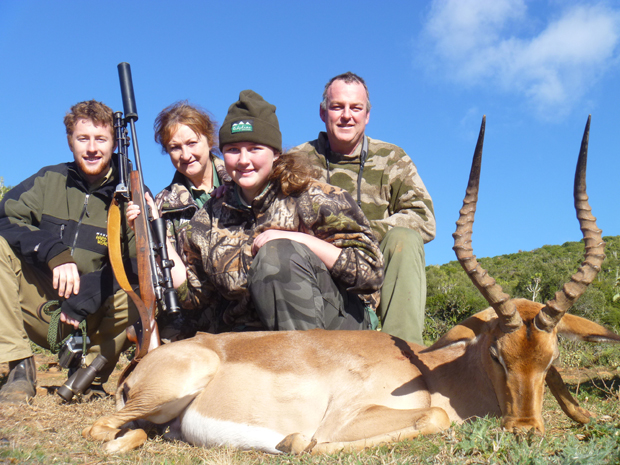 Mel with Maddi and her Impala 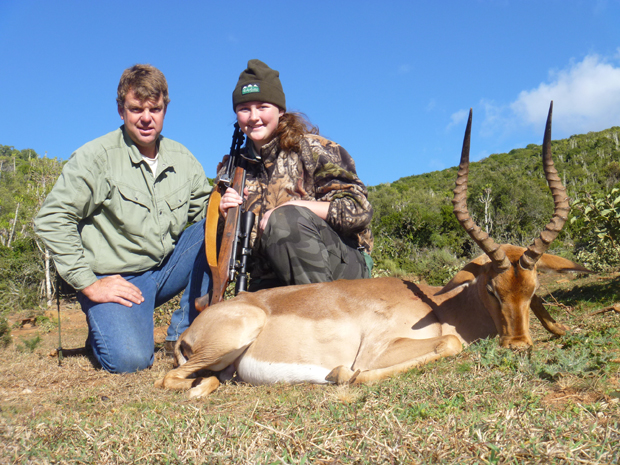 That meant that I could finally go hunting. Mel knew the general area that a very good Bushbuck ram had been frequenting. The ram had given Mel the slip on two previous occasions, so he was keen to get the drop on the crafty old fellow. After a lot of glassing and a little luck, Mel located the ram, or more accurately the south end of the north bound ram, about a mile away. A plan was made and the hunt was on. After manoeuvring through the thick bush, we where across the gully from where the ram had last been seen. A tense few minutes turned up nothing but bush. Then all of a sudden there he was, about 200 meters lower than we had expected. A longish, cross gully shot secured the ram, but it took almost 30 minutes to get to the ram in the thick bush. He was an old fighter, he had several badly infected wounds on his back legs that looked like horn wounds. 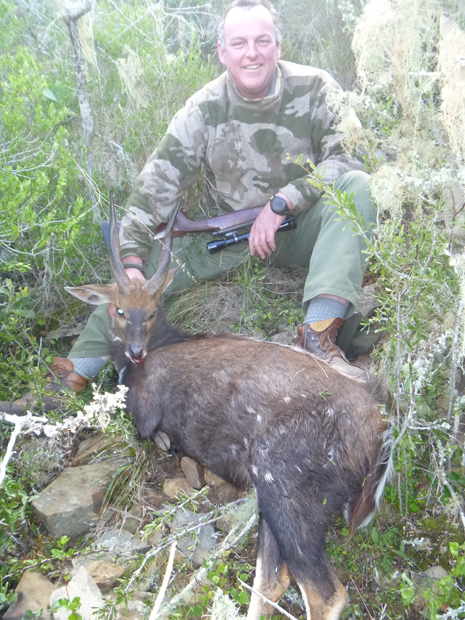 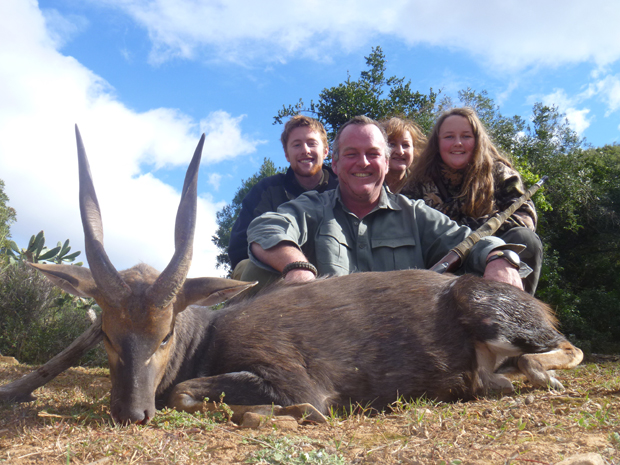 The little 22/250 performed well, and for what Mel uses it for, it does an outstanding job. The little projectiles performed very well, as can be seen by the photo. I wouldn't use it as my hunting rifle, but for first timers and kids, it's well suited.

Typical landscape we encountered in the Eastern Cape 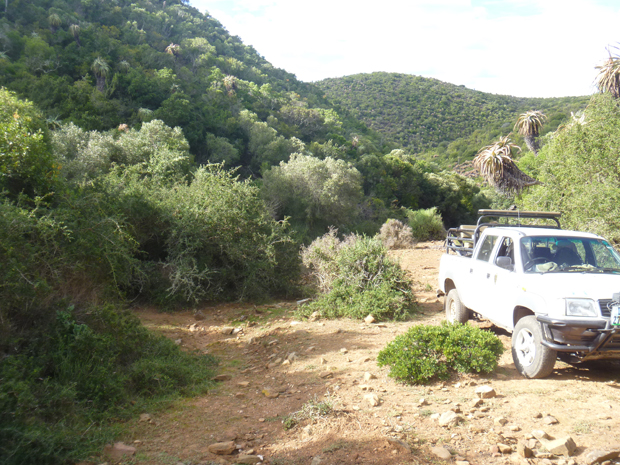 The 30/06 performed well, as usual. I've taken over 30 trophy animals, from Scrub Bull to Klipspringer, using the 180 grain Woodleigh protected points, as well as a good number of other stuff and they perform every time and are accurate.

The Cape Grysbok eluded me again this year, but I will persist.

I will hunt with Shumba Safaris again (this is my 2nd trip with Mel) and highly recommend them to anyone looking for a hunt in the Eastern Cape.

Great Report and Great Pics Congrats to all the first timers they took some fine trophies.
Enjoy Life Now! It has an Expiration Date.

Sounds like a great family hunt. Congrats to all.
Why we hunt, even lions? Real hunters need thriving wildlife, so we help make it happen. - Olivia Nalos Opre

Congratulations to more first time hunters.
4x1 That would be a fun hunt.
At least everyone got to be there to watch.

Wonder where the Bushbuck was who your ram was fighting with?

Good luck on that Grysbuck.

Congrats with a great family hunt!
Thanks for sharing it with us.

Congrats on a great hunt.

Congrats for the family hunt, and thanks for the story and pics.

Thanks for the wonderful family hunt report and pictures controlled_feed!
Jerome Philippe, Founder of AfricaHunting.com
You must log in or register to reply here.