To start, the purpose of the hunt was not really to kill a Buffalo so much as it was to hunt with Johnny. I had met Johnny about 6 years ago and had read about him and really wanted to spend some time in the field with him.

June 27th get to the lodge and sight rifles in and have supper and a few drinks, get a good nights sleep.

June 28th Get up have breakfast and head out. Check water points, and find one that the Buffalo had been using the night before. We find a herd of about 14 animals, but they are off a ways, so we try to get around them and head them off, to get a better look. Get to a better spot and get a look but not really a good one. We spend a bit off time trying to get a better look, at one point we where above them hoping to have them come to us. But we walked right into them and scared them off. We finally get a good look and there are 2 good bulls, but decide I could do better.

Go for lunch and head back out about 2:30 PM. Checking water points and on one we spot a herd of 4 bulls. Get off the Bakkie and do a stalk. Determine that they all are shootable, but 2 are bigger. Stalked up to them but Johnny figured that we where in a bad position, if we shot all 4 would come direct towards us, because of the fence line. So we backed off and set up to watch the water hole. They came out and we decided which one I was going to shoot, but I couldn't get a good clean shot.

They went into the bush and we waited and they came back out and walked past the water hole, and kept coming. They came out to where they saw us. and 3 stopped and looked at us, the one I wanted just walked passed the others and stopped broadside. I fired and he went down but came right back up, I fired a second shot quartering away. Reloaded and he went behind a bush, when he came out he had blood pouring out of his nose. Johny had told me to keep shooting till he dropped, so i fired again, and again reloaded and fired again and he went down

While this was going on the other bulls where acting a bit aggressive one in particular kept coming towards us and then backing off. He finally went up to the bull i was shooting and smell his nose and took off. The bull I had shot was lying there giving off his death bellow. we waited and when he stopped I reloaded my spent chamber. We slowly walked up to mine, watching for the other bulls. Out of the 5 shots I fired 2 where lung shots 1 was a heart shot and 1 was a neck shoot and 1 a miss.
This was my second Buffalo hunt and was much better then my first, we had time to set up for a good shot. On my first Buffalo we just tracked trying to get a shot, so my first shot was a running shot. 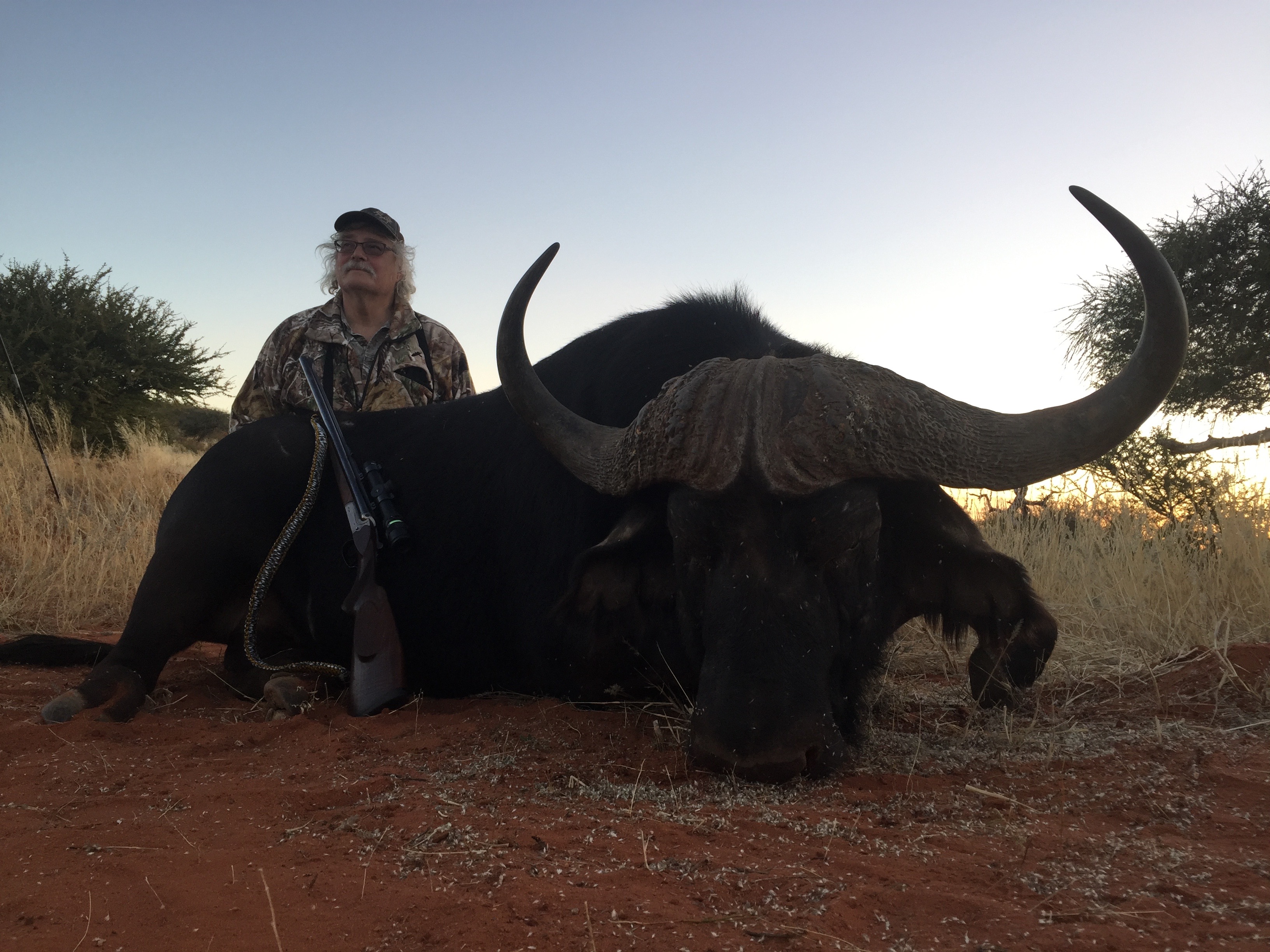 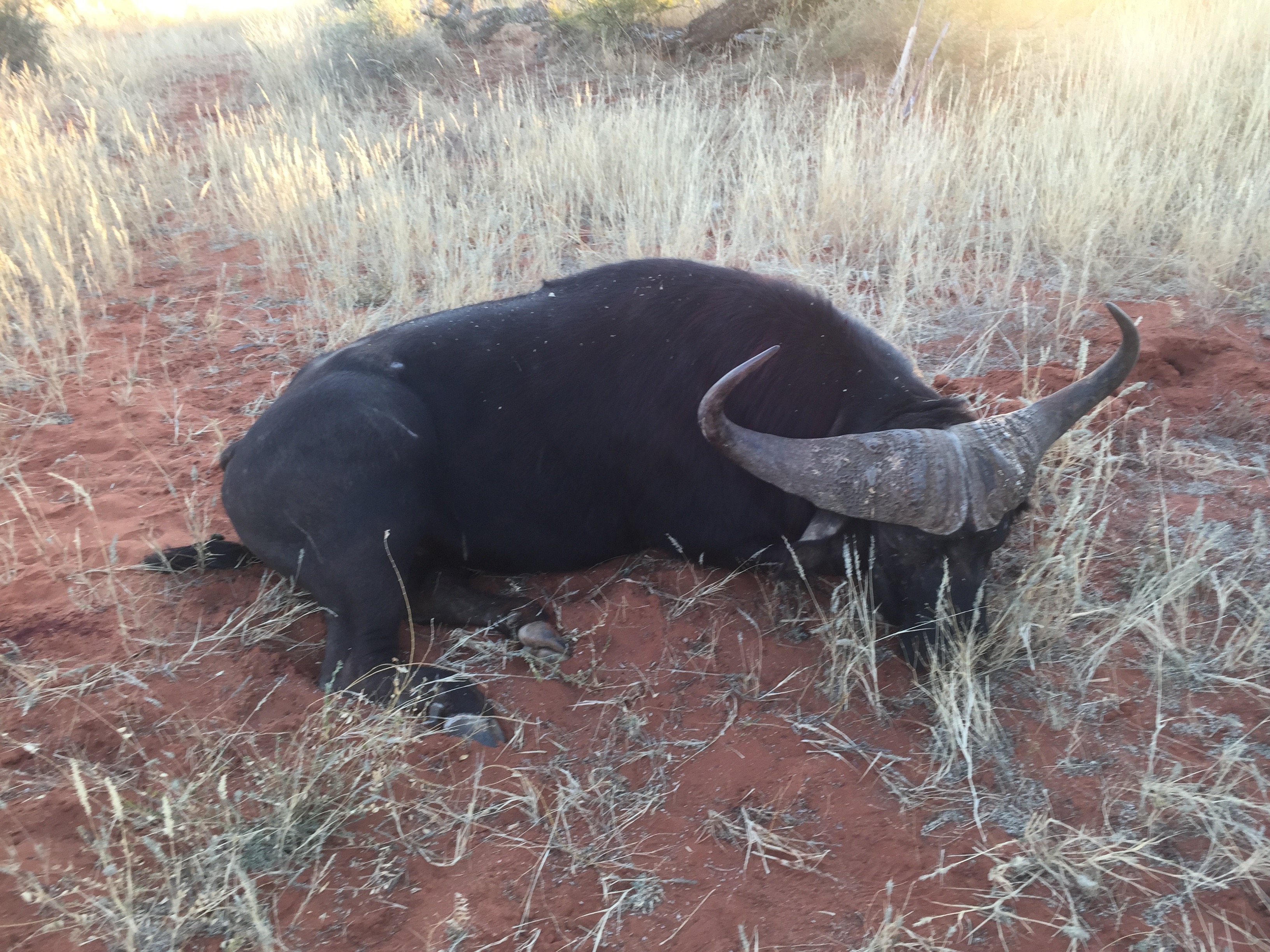 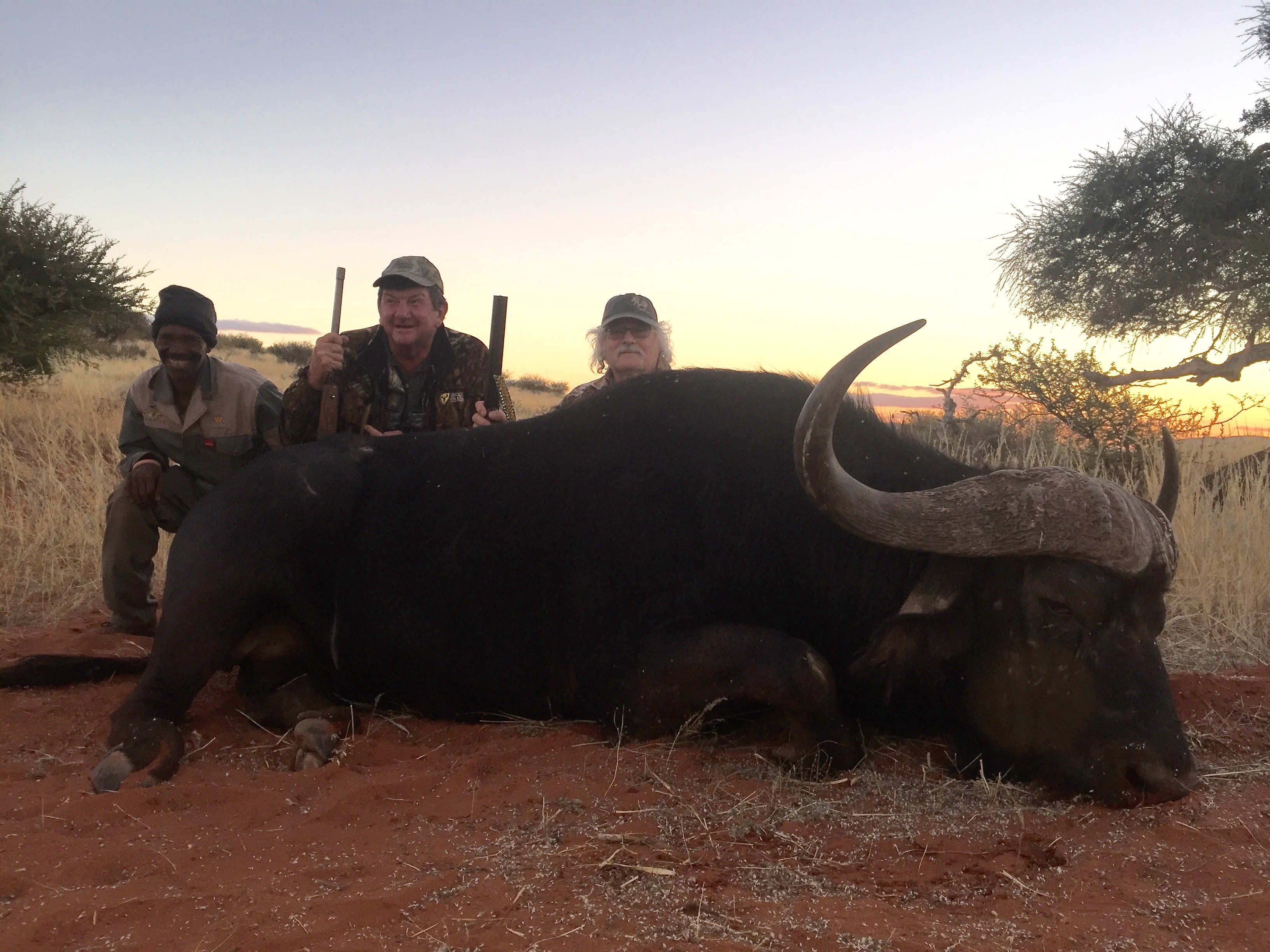 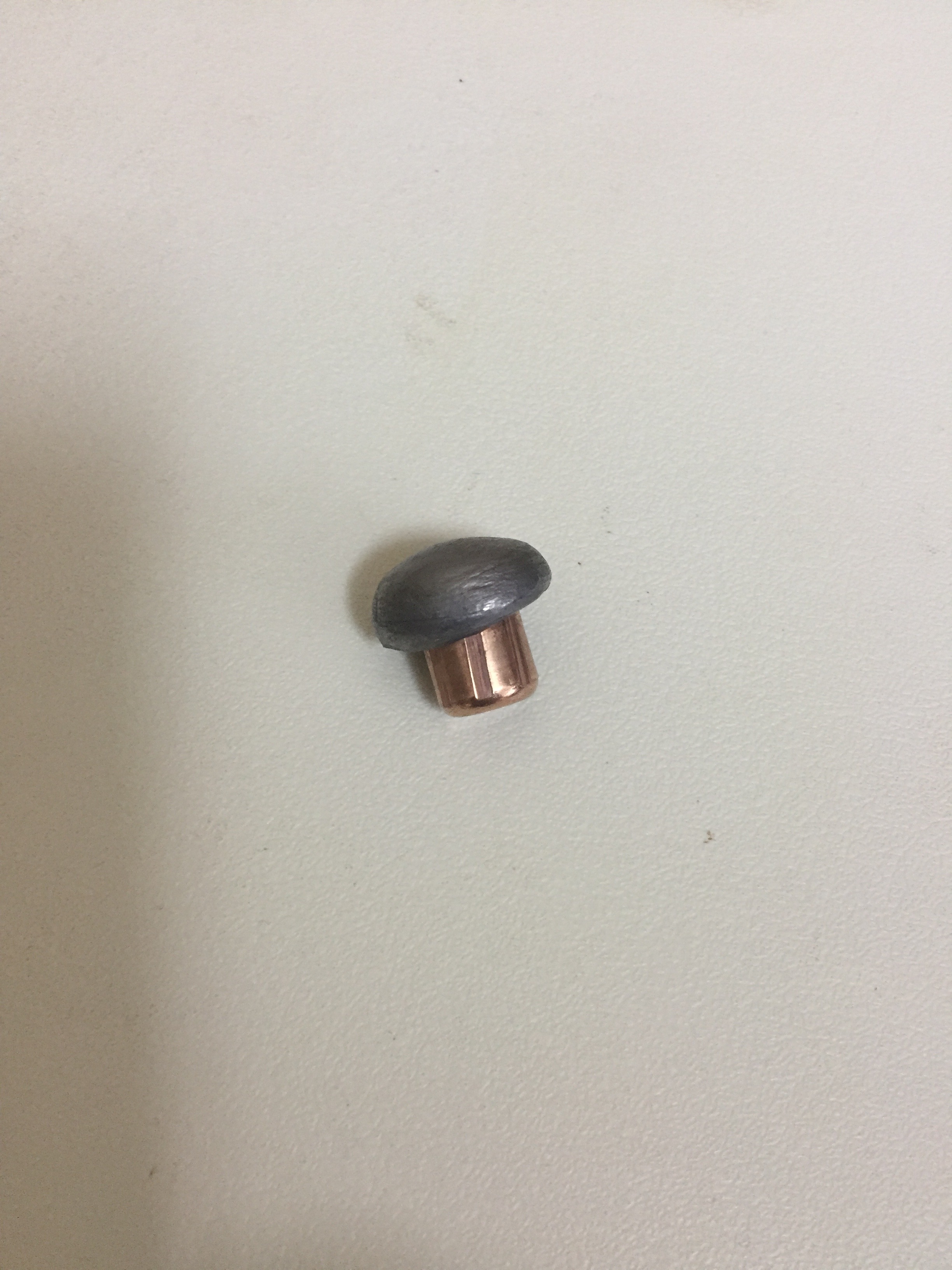 June 29
My second animal that I wanted was a Red Lechwe. Had breakfast at 8:00 Am, Loaded up and went out. Checked water points and saw lots of game in the hills. Springbok, Waterbuck, White Blesbok and Kudu. We where driving down a road and saw a Lechwe go into the bush, drove around a corner and there where 2 really nice Kudu laying down on a hillside. We started glassing and saw a Lechwe a long ways off. We decided to walk along a ridge to see if we could see anything in the bush. We went a ways and sent Pualie back for the truck. We spotted a Lechwe standing on a bank, he was nice but thought we could do better. As we where watching him he heard the truck behind him so just laid down in full view of us.

Walked down to the truck and drove to where we had spotted the other one, never did see him again. We drove around a dune and spotted a small Lechwe and some other game. went back for lunch.

Went out to the same area but by a different route. Saw lots of game. Coming up to a waterhole saw 2 nice Lechwe, but they spotted us to. Backed the truck up and when behind a bush Johnny and I got off, Paulie drove the truck around and was to climb over a hill and try to drive them towards us, us we sneaked through some thick brush. Half an hour later we hear Paulie throwing rocks and talking to them. They came into view and I was on them but couldn't get a good shot.

We decided to try follow and 10 minutes later got a shot, they were farther away then I thought, so I hit low and broke it's shoulder. We followed trying to get another shot. Then Paulie showed up with the truck and we tried to get ahead of them. They didn't show up so we went back and found blood, Paulie was going to track them and try to drive them to Johnny and I. We no sooner got to where we thought we should be and Paulie radios he has it laying down 50 yards in front of him. We drive back and walk to where Paulie was, and start a stalk we spot it laying down and I shot and it jumps up. Johnny and I both fire and it's down. If I would have hit him 2 inches higher on my first shot he would have died on the spot. 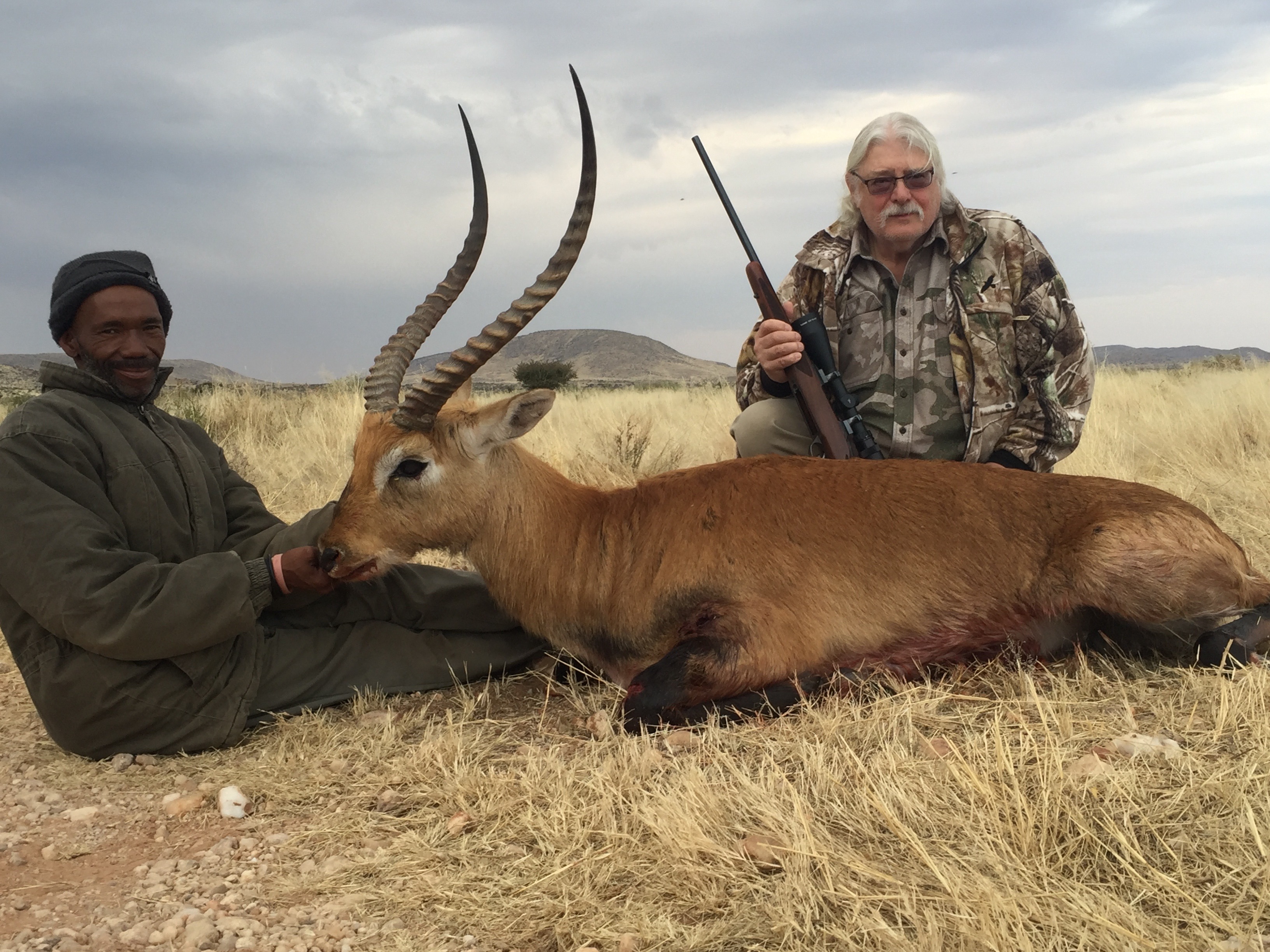 June 30 we are not hunting, so Johnny takes me to their Sable and Roan breeding area. we see lots of game. 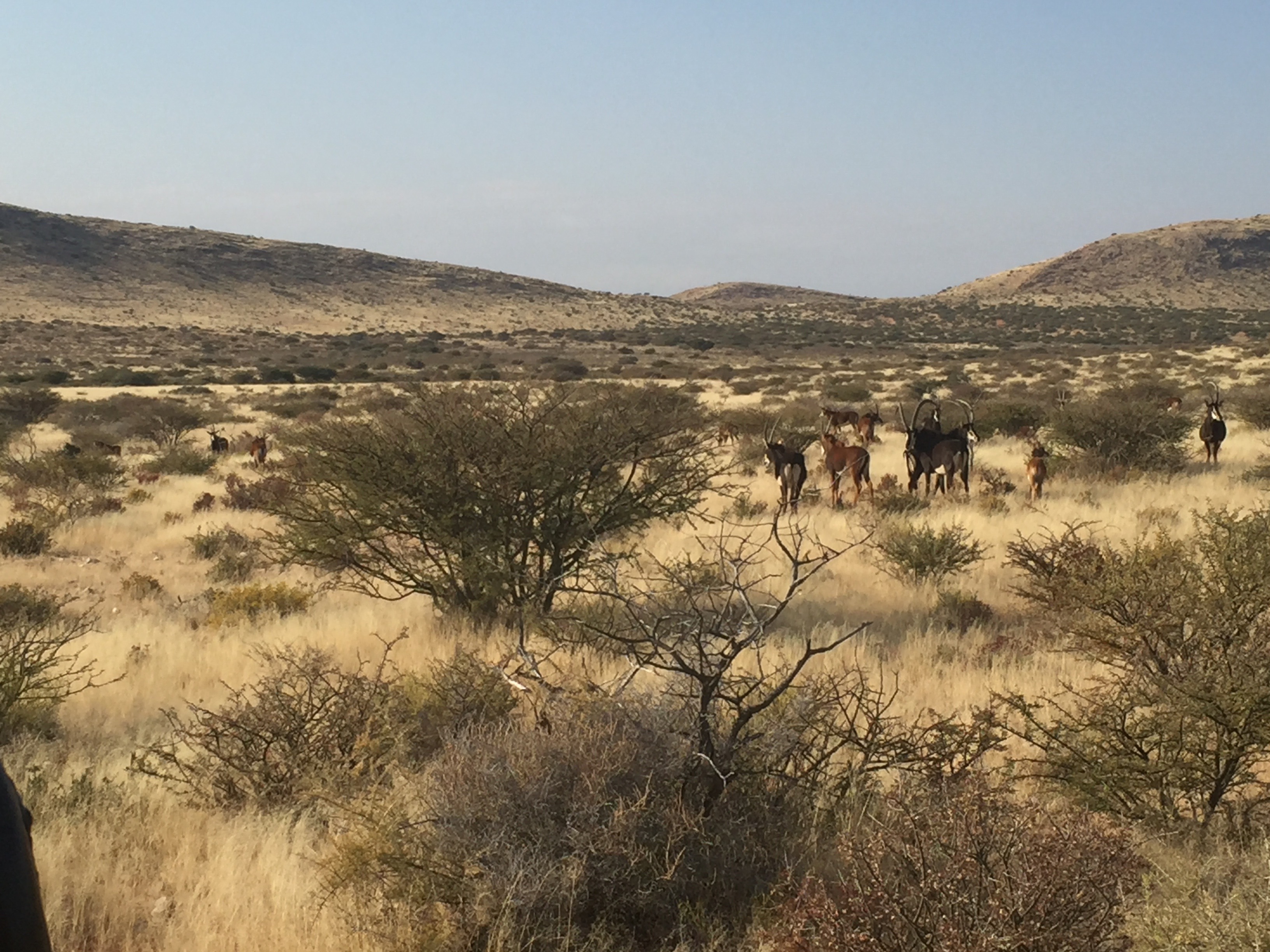 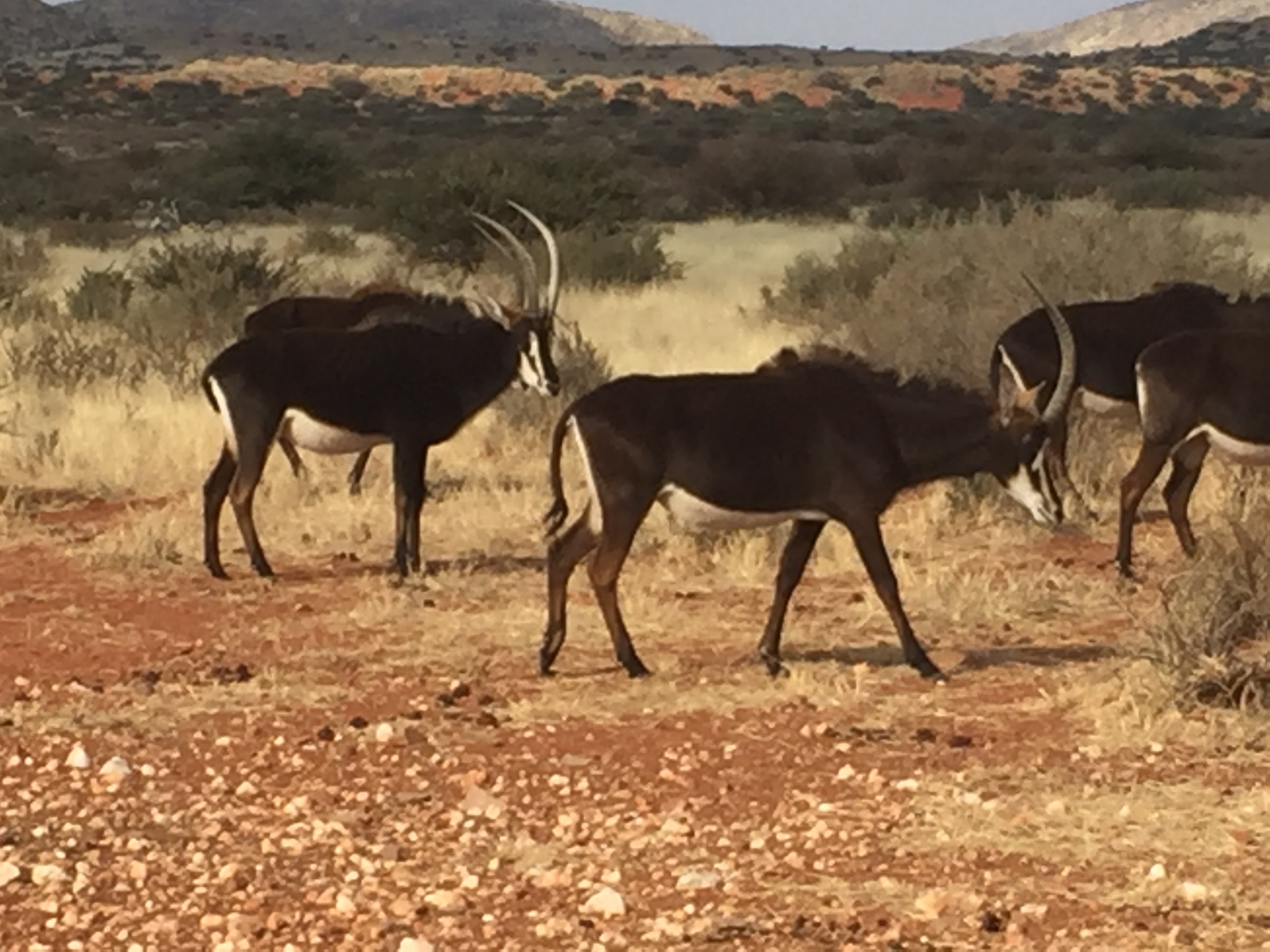 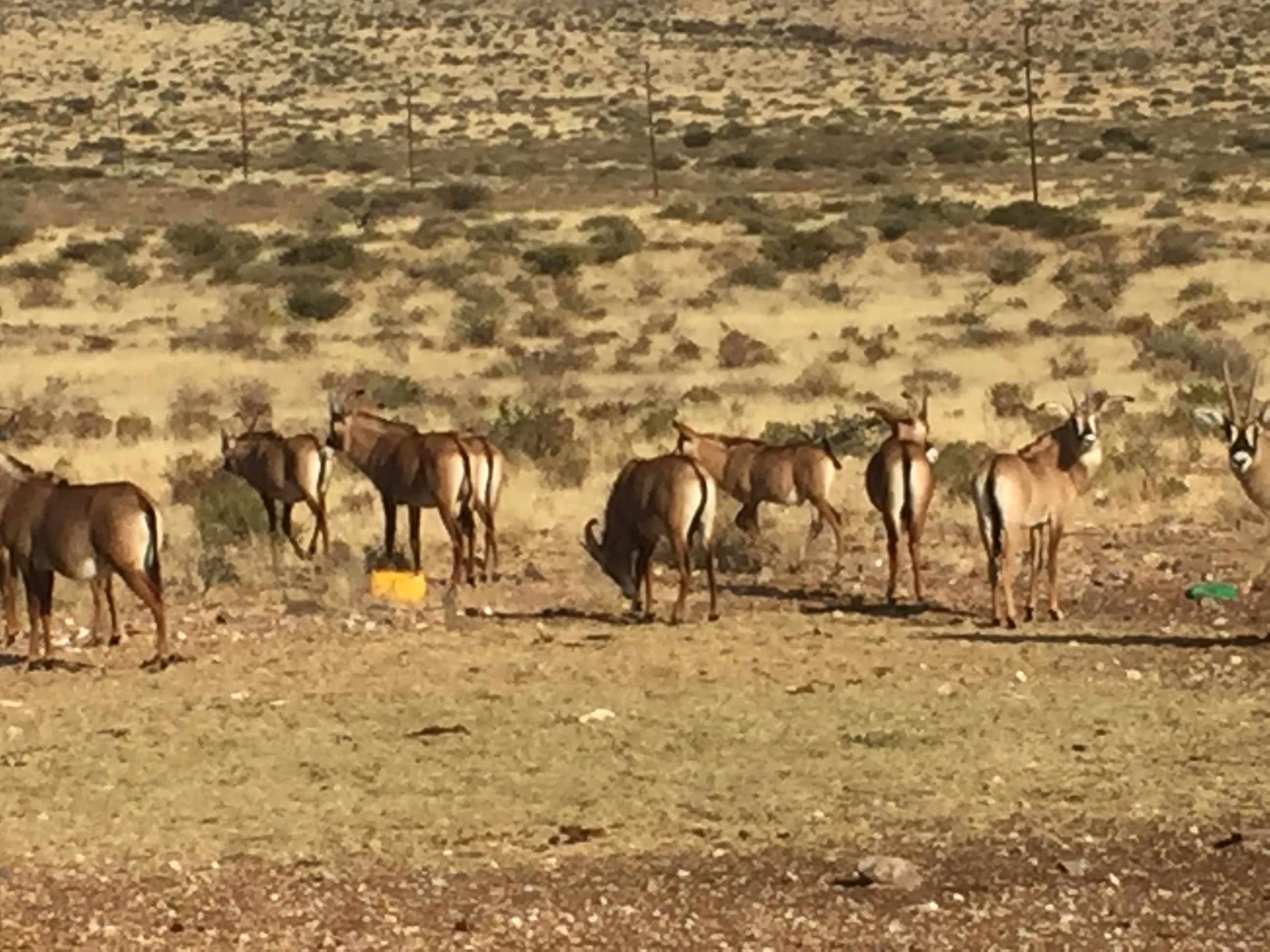 Go have a late lunch and start packing around 4:00 Johnny comes to the door and says we need to go for a drink. We hop in the truck and go to a dune for a true African sundowner 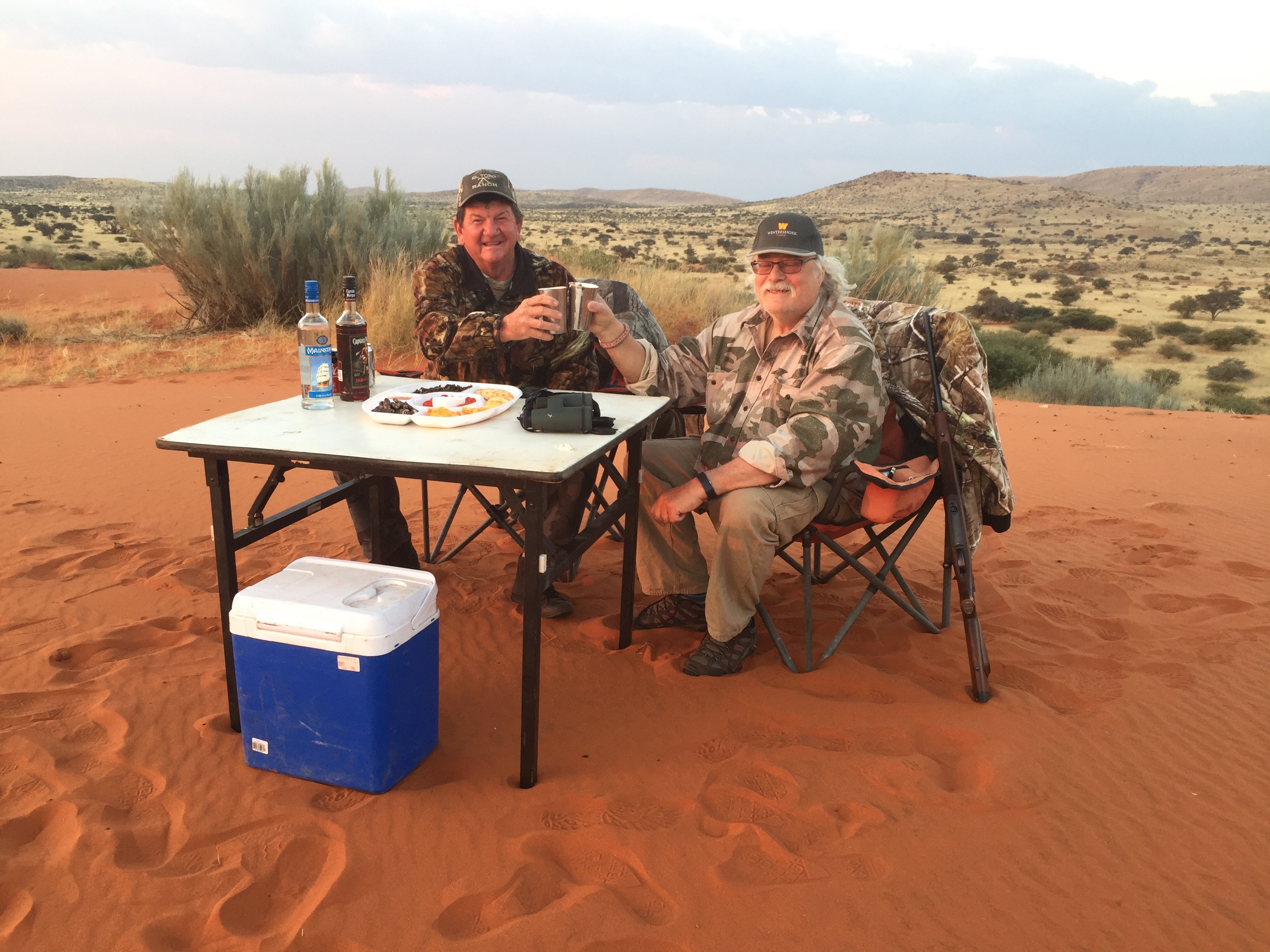 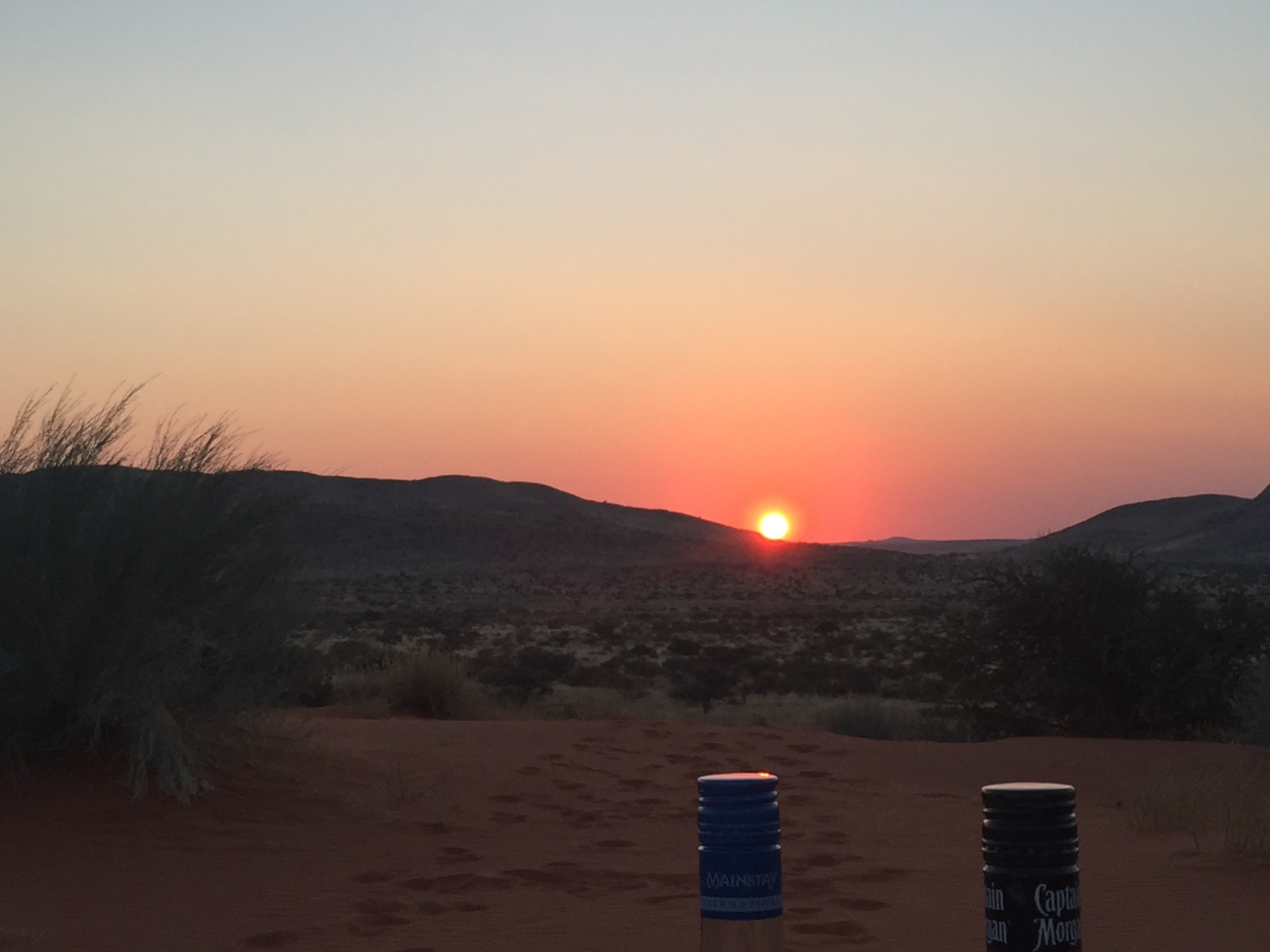 So ends my hunt with Johnny. Though short, it was one of the best experiences I've had in Africa. 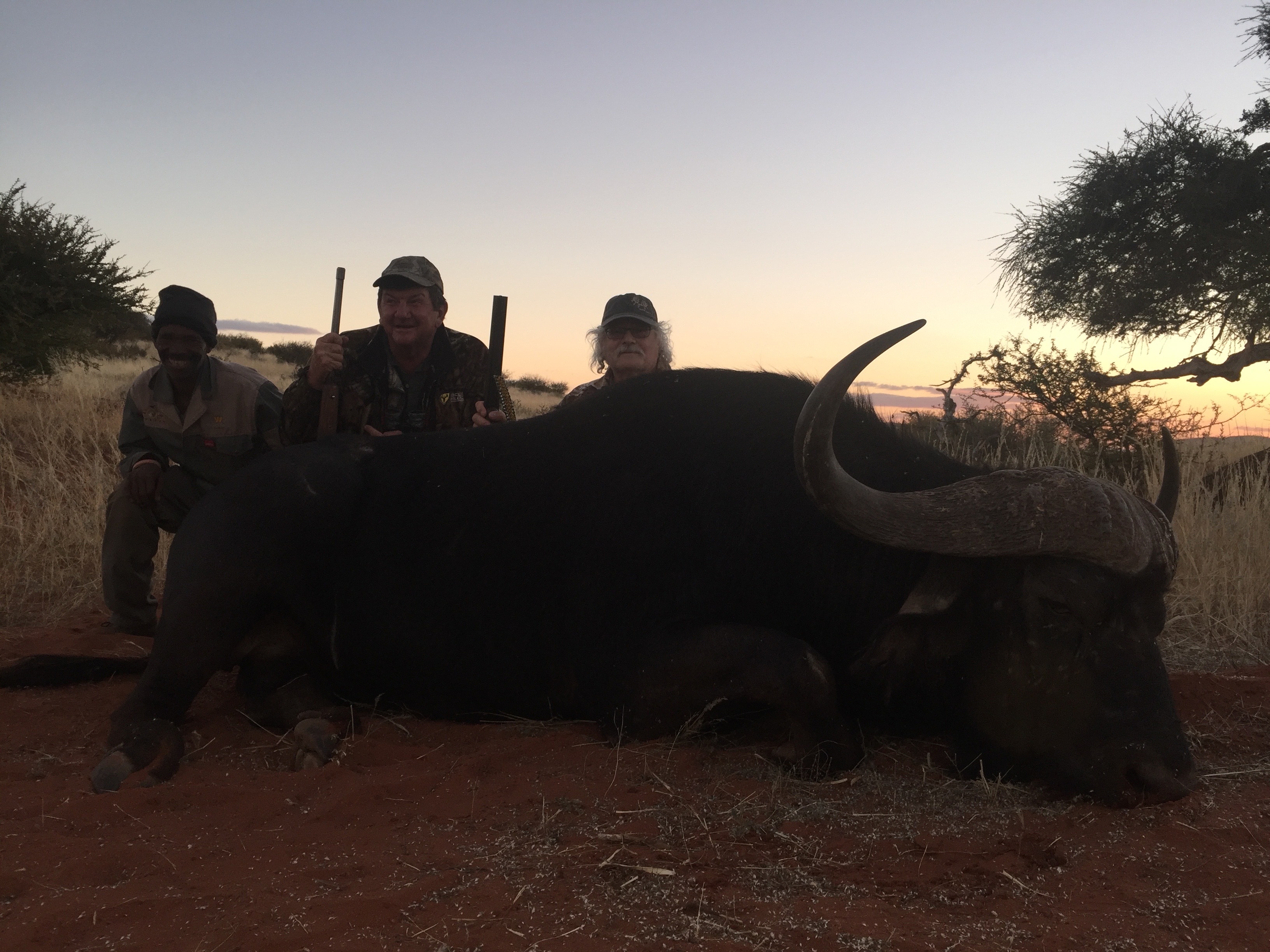 Congrats and thanks for sharing!! Beautiful lechwe!
JasonY

Glad you had fun with Johnny.

That looks like a nice buff, what did he measure out at? If my count is correct, that buff took three good shots to bring him down. The neck shot may or may not have struck anything vital. How far did he travel after the first shot? At what distances were the various shots taken?

Sounds like a great time. Very nice animals. I'm sure it was a good time hunting with Johnny. Congrats Bruce

Shootist43 said:
That looks like a nice buff, what did he measure out at? If my count is correct, that buff took three good shots to bring him down. The neck shot may or may not have struck anything vital. How far did he travel after the first shot? At what distances were the various shots taken?
Click to expand...

40 yards and he may have move 10 yards the whole time. He was died after the second shot but nobody told him

The sundowner pic is super cool.

Congratulations sir.
Tommorow is promised to no one. Go live your dreams.

Nice trophies. Have a cold sundowner on a red sandune is pretty cool!

Impressive buff and Lechwe. Looks like you had a great time. Thanks!

NICE! Thanks for sharing!
Africa on my mind.
You must log in or register to reply here.

SOUTH AFRICA: My Son & I Hunt With White Lion Safaris
2