Before I tell the story on Day 5, I thought I'd show another pic of the zebra I had taken the day before......still can't believe how beautiful they are. 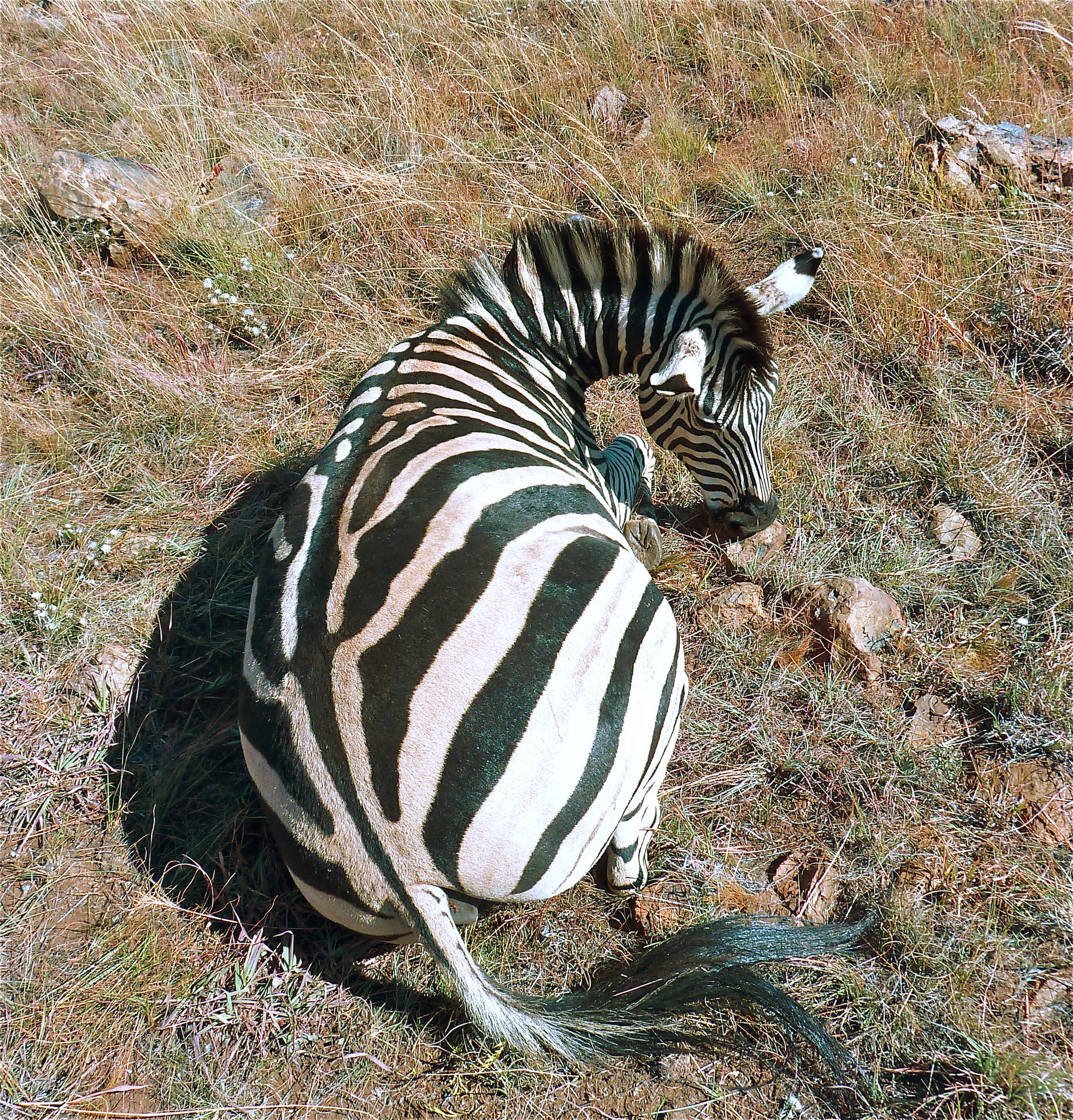 Today I decided I'd go after an impala ram specifically, and leave the oryx for another day, unless I just stumbled into a nice one. Zac was bound and determined to put the spot and stalk to work with his bow. The impala were very, very skittish and were holding tight in the bush. It seemed like they led us around in big circles, never giving us much time at all to judge, then get a shot off. I finally figured out that when we would see a good bunch of them, they would of course spook before I could get a shot off, and run a couple hundred yards and stand around again, looking back where they came from. Even though the visibility in the bush was anywhere from 40-100 yards max, the impala always saw us first, then spooked again. This game was replayed many time over again. I'm wondering now how anybody ever kills one! Of course the impala were the exact color of the grass, which only made it harder. Several times the PH would see them, or see parts of them I should say, and I wouldn't see them at all until they moved off again. Persistence did finally pay off though, and I was lucky enough to get one good crack from 80 yards at this ram. I thought I'd missed, as he took off like lightning, making a 50 yard circle, returning back to within 10 yards of where I'd originally shot him, and fell over dead. 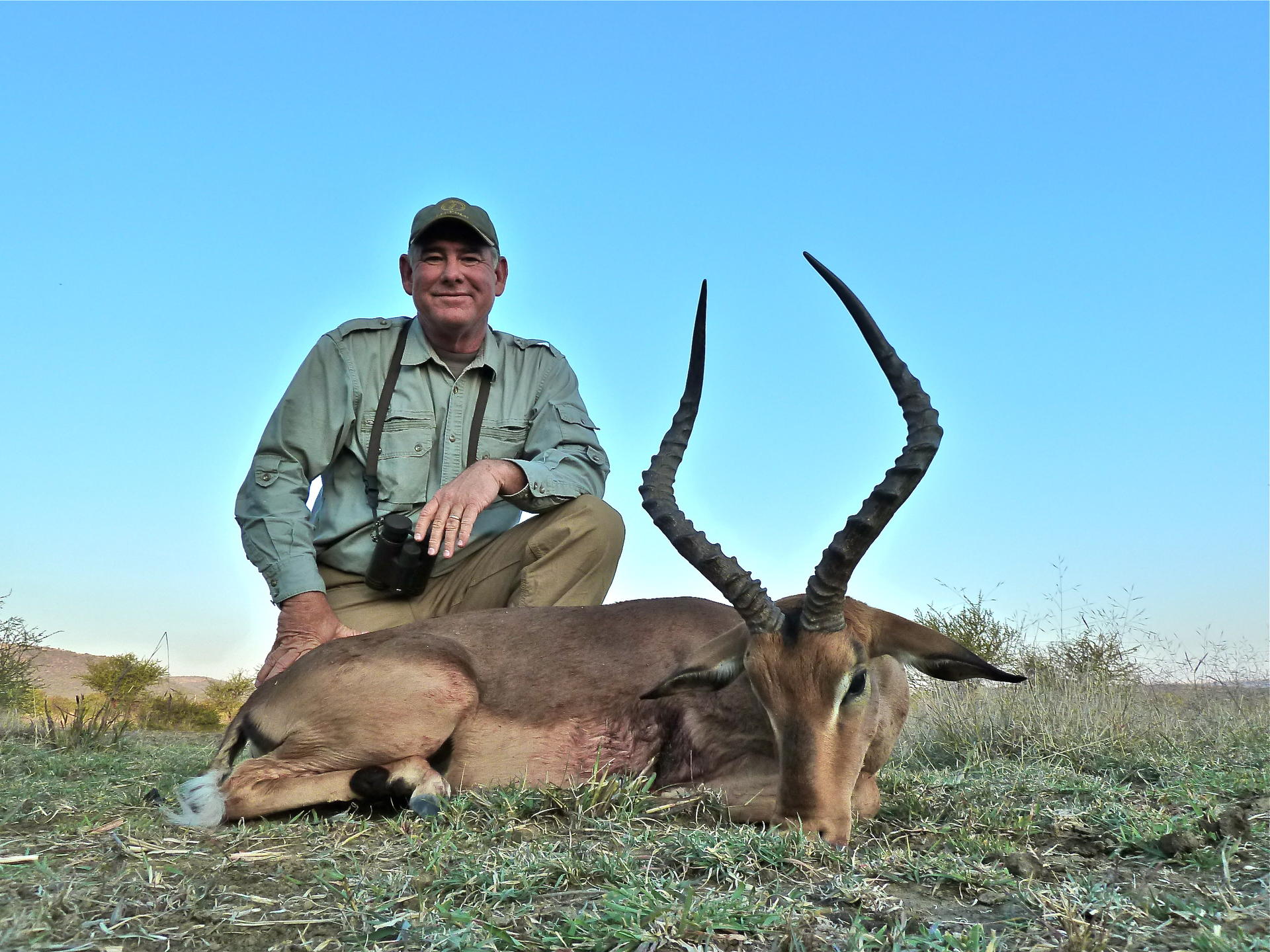 Thought I'd show a close up of his face. There is some beautiful black outlining of the ears, eyes, etc that I didn't notice until I got up close and personal. 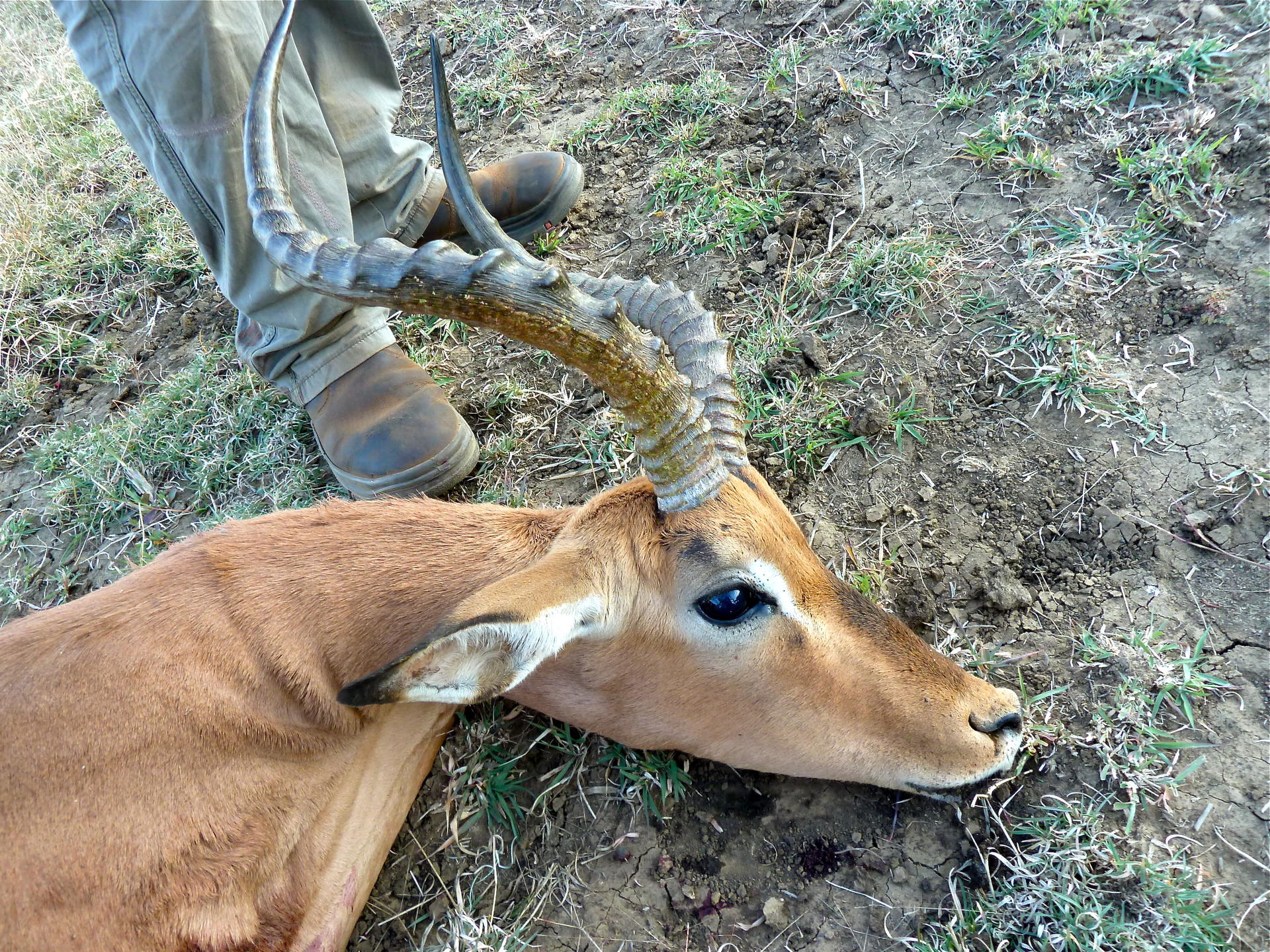 Well, having put a very hard earned impala ram in the salt, and taking him to the skinning shed, we went back to the camp for a late, light lunch and a little rest. We'd walked several miles, my knees barked again, so I just wanted to relax some. After about an hour, Zac showed up and made us get into the truck with him and his PH, taking us the the scene of the crime. Turns out he'd missed earlier in the day on a big red hartebeest ram, but stayed with the herd and eventually hit the bullseye with this one, from 40 yards he said. 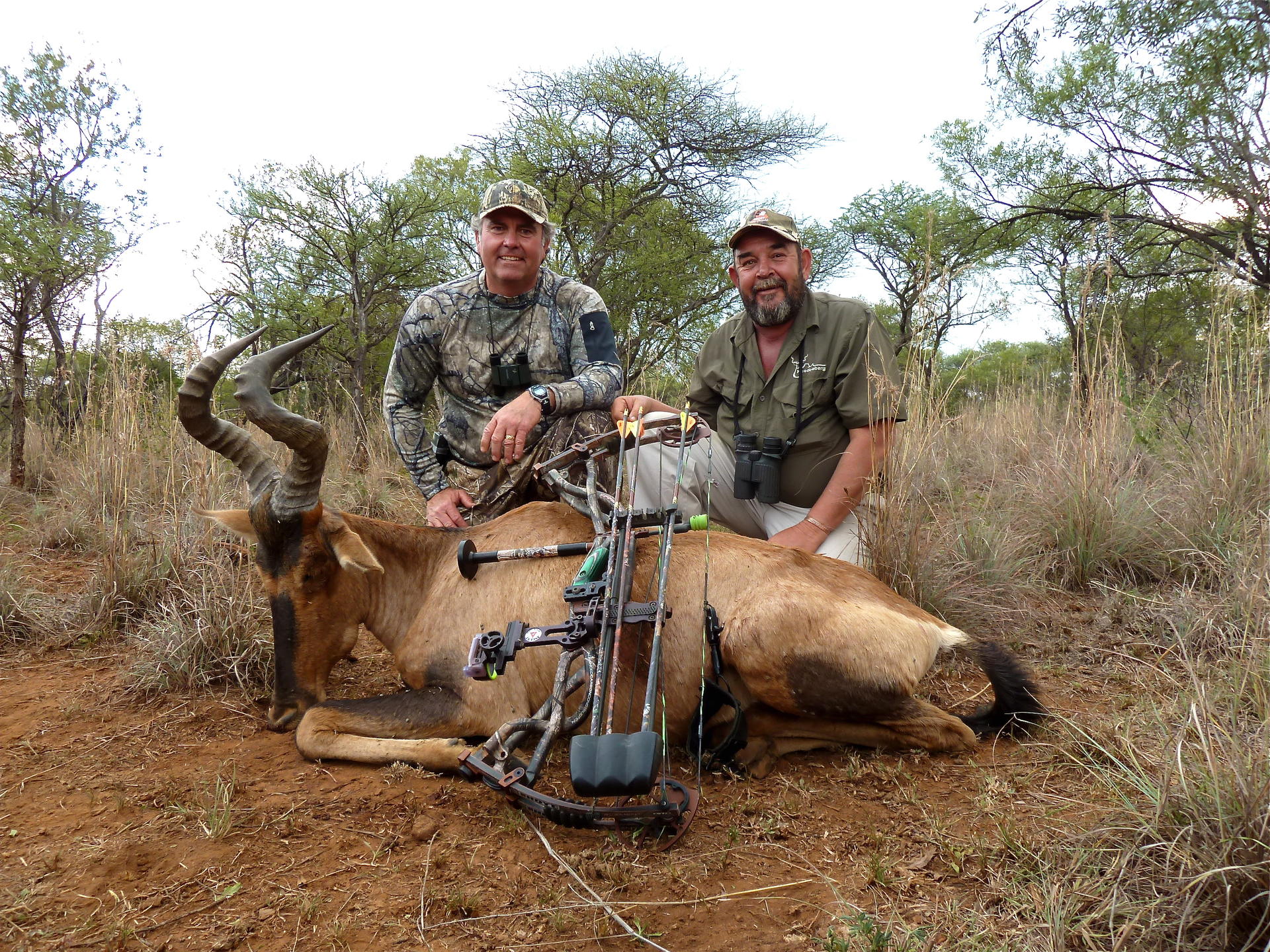 We had an hour or so of daylight left, but decided to take his hartebeest to the skinning shed and call it a day, as it had been another one to remember. We got back to camp, and were informed that we would be having carpatjou tonight. Now don't quote me on this, but I think I got it right. The meat, in this case kudu, was cut bone in, and simmered for about 9 hours with some double top secret spices. For the last two hours some small zucchini, yellow sweet peppers, a little potato, and something else was added in. It was served over "pop", which was sort of like grits but instead of hominy it consisted of like a wheat and grain meal. Anyway, it was absolutely superb stuff. 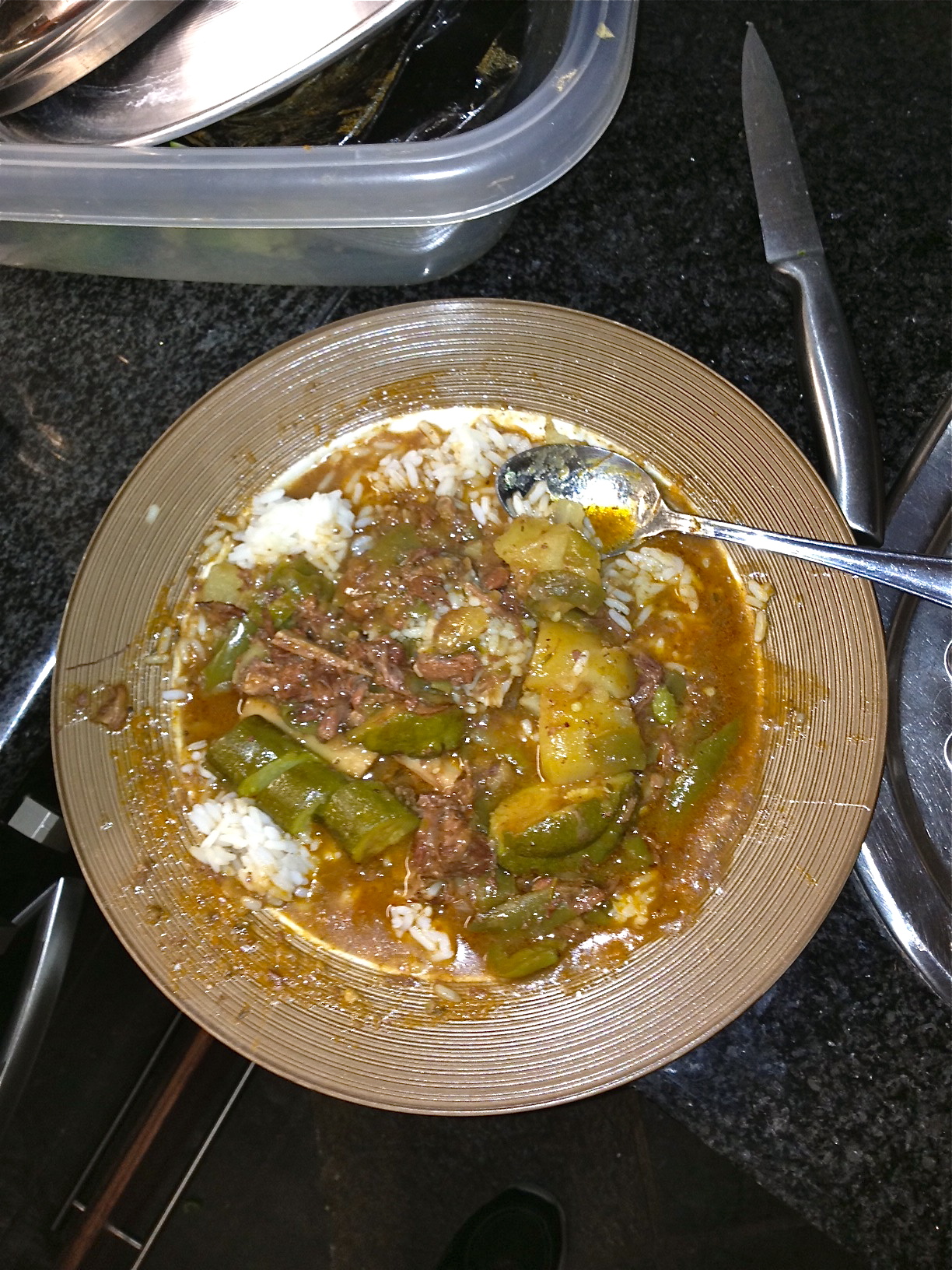 JG this is a great way to tell your hunt report! I love how you are doing it, totally reliving each day in detail. I wish I had done mine a bit more like yours. Your trophies are excellent and I know the deal about busted stalks and swirling winds. Keep it coming...keep it coming! I miss Africa and I have only been home for a month. I love the double kudu photo! One of my buddies and I hunted together and we doubled on Mountain Zebra but we didn't move them together for a photo like that! Drat! Spectacular hard hunted animals.

Way to go JG that ram is awesome.
Enjoy Life Now! It has an Expiration Date.
J

Thanks guys. I'm having fun telling/reliving it.

Good job! Some nice animals and a good story to go with it. It sounds like you had a great time. Congrats. Bruce

Thanks for sharing your great hunt with us JGRaider!
Love your report and your animals.

Zac got a dream Hartebeest. WOW.

Impala are beautiful. Your honest appreciation of your experience of your trophies is much appreciated.

It reminds me that I have to make sure to get a good cape for my Impala this trip so I can look over and see that deep red cape fringed with black.

Great story, JG. It sounds like you had as much fun as we did. We enjoyed something like carpatjou, too. Good stuff.

Congratulations on a great safari! You both took some amazing trophies. Thanks for posting such a detailed report. That Leopard encounter alone is worth the price of admission! What a stroke of luck to encounter one during the daytime.
You must log in or register to reply here.