Juan and Lauren from LJ safaris picked us up in Grahamstown for what was to be my third safari in 12 months. We had a busy scheduel on our hands, a package of 50 cull animals in the short time of 8 days.
We drove up to the farm where we met up with Stephanos and Kim, the local farm managers and enjoyed a light lunch in the beautiful communal farmhouse that serves as lodge. I immedietly saw one of the small things the guys had done for me to make my safari as comfortable as possible - excluding the tomatos from the salad - as I’m ever so slightly alergic to tomatos. I had long since forgotten about the sheet we filled out with dietary needs and prefrences, but they sure hadn’t!

We set out to the range that afternoon to shoot in our guns and took out to the veld to get our hunt started right after. Driving around the farm land was an amazing experience for me, we got super close up to a herd of buffalo and within spitting distance of a vied rhino mom and calf. Scincerely a unique experience for me. We had quite a productive afternoon, 3 impala rams down before the looming sunset pushed us home. The farm manager in collaboration with the owner is doing a very specific gene selection programs with the impalas, trying to keep the horns in the heard nice and square, so we were shooting out the ones that pointed inwards. some very beautiful animals, and nice every now and then for a culler like my self to get impressive big horned animals. 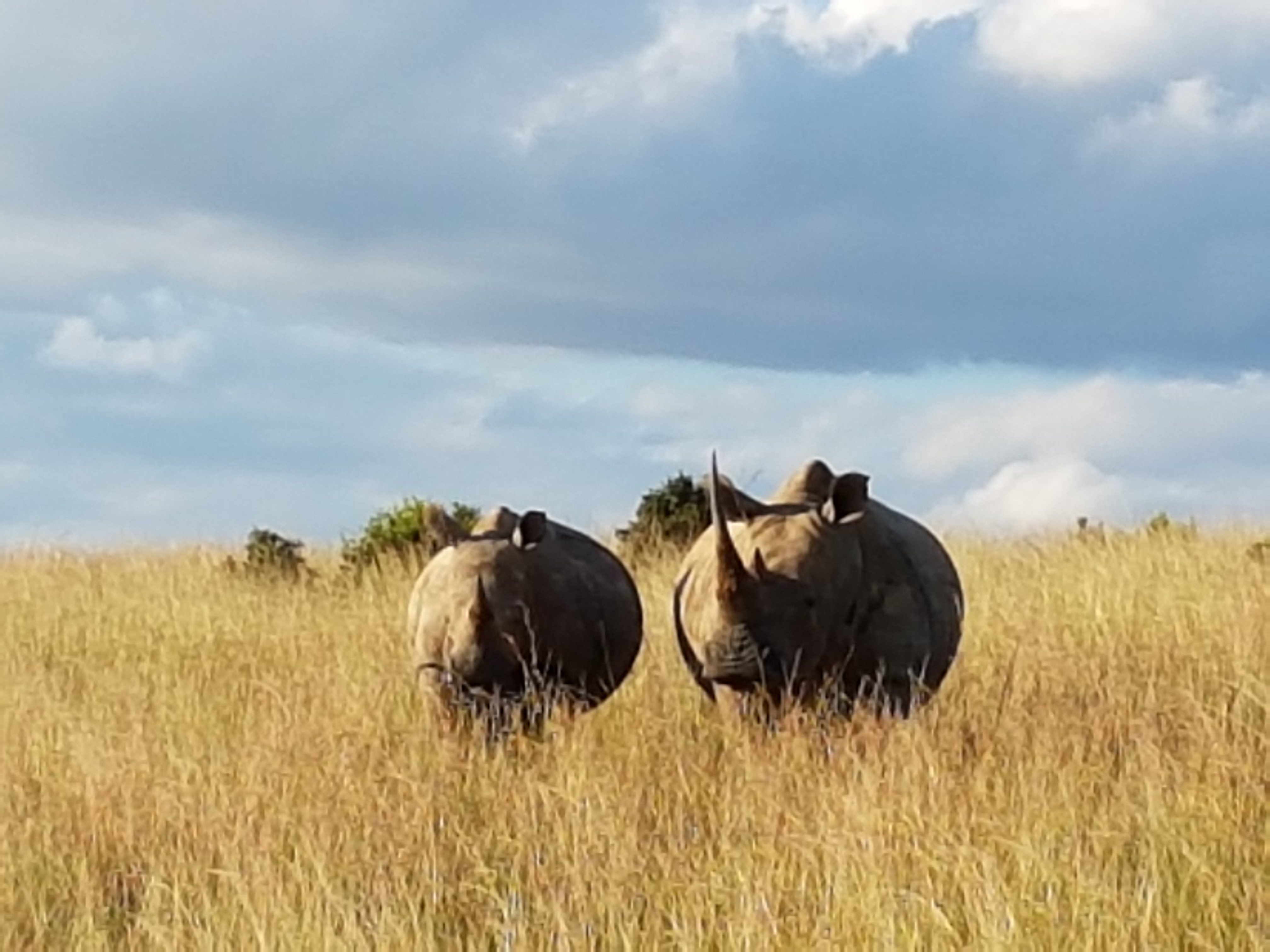 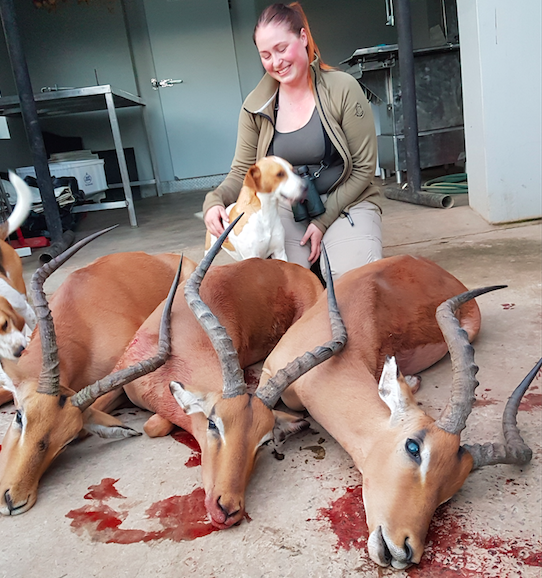 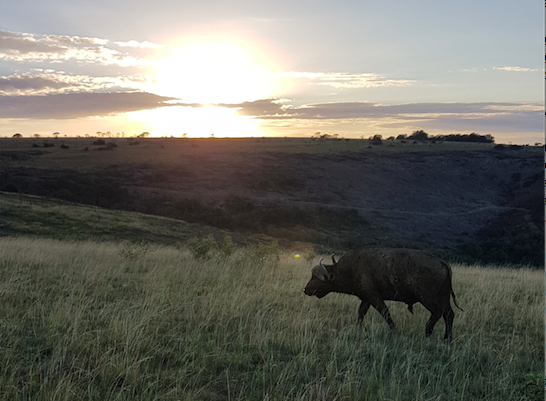 Now we had some time to really check out our accomodation and freshen up before dinner, and what accommodation it was! big comfortable bedroom with an incredible bathroom, huge bathtub, and a powerful shower. ahhh, feels just like home!
We had a nice dinner with the crew, a couple of drinks out on the veranda and an early night.

The next morning it was time to for the old guy to try his luck on the giraffe. This one was quite the operation, as his double rifle was still in for repair when we left from iceland and we only had smaller calibers with us (.308 and 7 mm for him, 7x64 for me), so a local friend Hendrik came to the rescue with his 300 win mag. After a couple of rounds in the range we were all set and super pumped for the hunt of the day. We located the herd quite quickly (have you ever had to search for a herd of girrafes in the karoo? …. me neither). and went out for the stalk. we may have been over excited, as 5 of us went out for the stalk. The old guy got a shot off on the bull we were going for but alas, a miss, and the herd ran off. Not to be discouraged we regrouped, relocated the herd and gave it another go. This time around we decided maybe the best thing to do was to just send the hunter and the PH on the stalk, so the rest of us stayed behind on a mountainridge. Of they went, on what seemed like the longest stalk ever. unfortunately the herd got spooked and moved over a small ridge, and we decided to radio the pair of them to arrange a pick up spot- only to realize there was no radio in the mix. So we decided to sit tight for a bit and see what they decided to do. Later on we see them setting up a shot at about 200 meters, hear the shot go off (after we see the herd start moving… we were quite a way away) and eventually spot the entry wound low on the chest of the bull. The herd moves further along and on they truck after them. The get into position and place another bullet a bit higher than the first one on the chest of the animal. we’re on the binos watching the most exciting movie we’ve ever seen, quietly cheering them on, trying not to make too much of a noise or move too much. we can see this bullet hurt, and he doesn’t go far, and the guys get closer and get into position again. At this point I’ve bitten all my fingernails completely down and my bloodpreasure is probably in the danger zone by now, only immagining what the guys must be feeling. The big bull doesn’t move far and they soon get into position again. On the binos I see the animal go down like someone pulled the plug on it, after it dissappeared from my view I heard the gun go off. IS IT DOWN?? I half yell at Juan sitting next to me, clearly seeing that it’s down, and he readilly confirms. We do our wooping and highfives and hugging, before we make our way accross the valley to meet up with the guys. This had taken all morning and we were well ready for our lunch back at the lodge. We went back out in the afternoon and got 5 impala rams before we headed back to the lodge for dinner.
Kim and Stephanos had prepared a Braai for us and even gave us a taste of impala liver (considered a delicasi by most… but my palate on the other hand does not in any way appreciate any kind of liver). 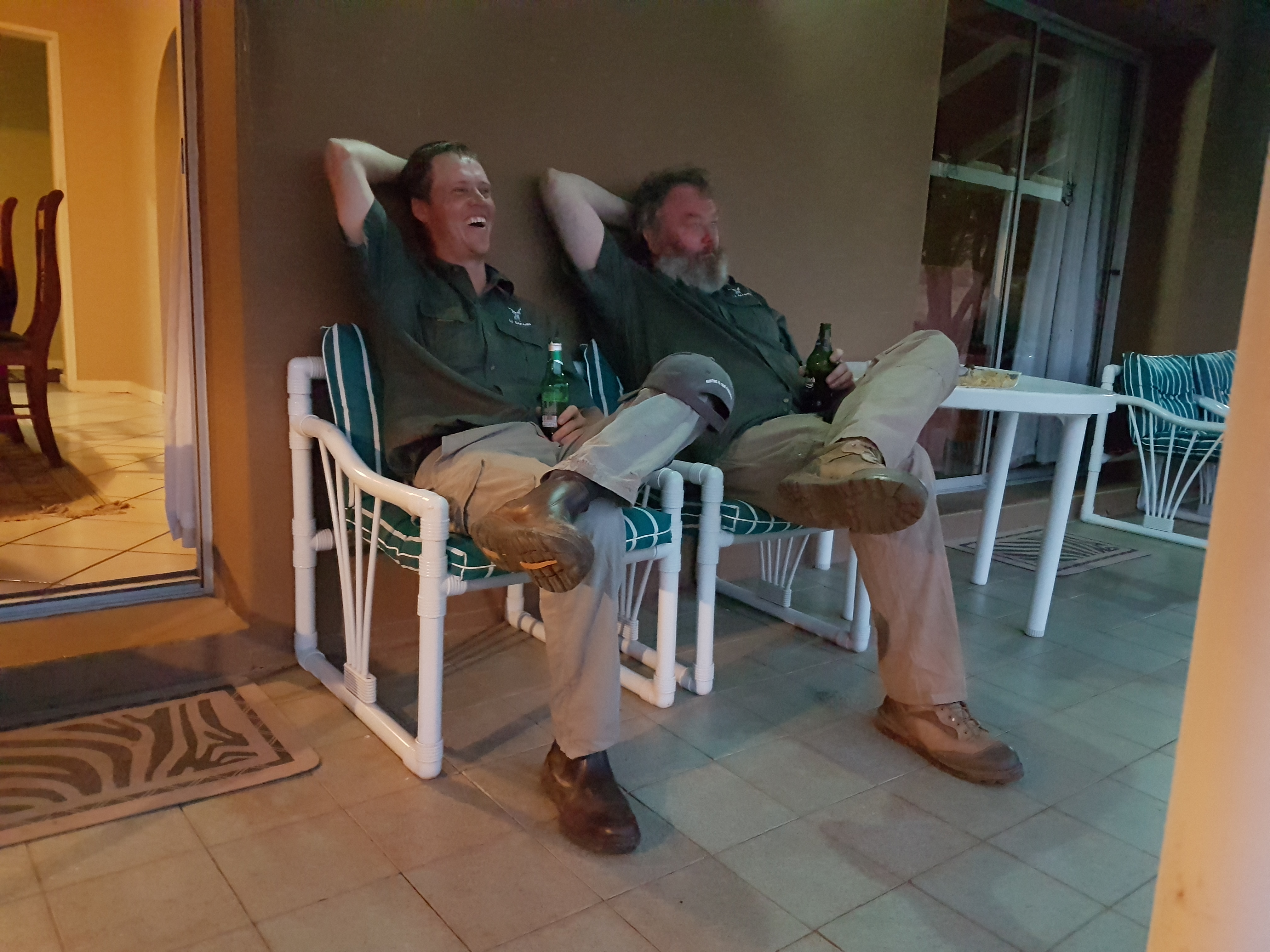 Next day was a super hot, about 25° before 10 oclock. We decided to use the morning to drive over to east london and run errands, and when we got there around noon it was 42°. Us being ICEPEOPLE and all it was quite nice to stay in the comfort of the AC in the truck during the warmest part of the day. When we got home (around three in the afternoon… down to a fucking chilli 38 in the shade) we decided that this was an off day, and had some pre dinner drinks. Somewhere along the line that night we decided that we’d go zebra hunting the next day…. As the farm has way to many stallions in their big herd of zebra, together we decided that would be a nice end to our safari up there.

The old guy had first shot today, as I finished up the previous cull (we’re seriously civilized, we take turns and all…) and steffano set him up on a cheeky stalion that was challenging him to what I can only imagine is the zebra version of a duel. Well, the old guy settled that one quite quickly with a perfectly placed shot on the animal quartering towards us. Down he went.
We followed the herd around for a bit until we found a suitable stallion for me. I must admit I remember the details of the old mans hunt better than my own. I guess that’s what adrenaline does to you. It took us a while to get an animal in the crosshairs, it was a big herd and they were standing close togehter. My PH Lauren was on my shoulder guiding me from animal to animal as the herd moved, seeing how I was getting stressed (they had already remarked that zebras were some of the fastest animals on three legs!) and my PH could feel it too, remingind me to breathe as I was moving from target to target. We finally found a suitable animal quartering away and I hit it perfectly, just a stripe back of the triangle. and down it went. This one felt like one of my biggest hunting success ever. Also with the stripes, you can so easially tell if the bullet landed where you wanted it to, and this one sooooo did. 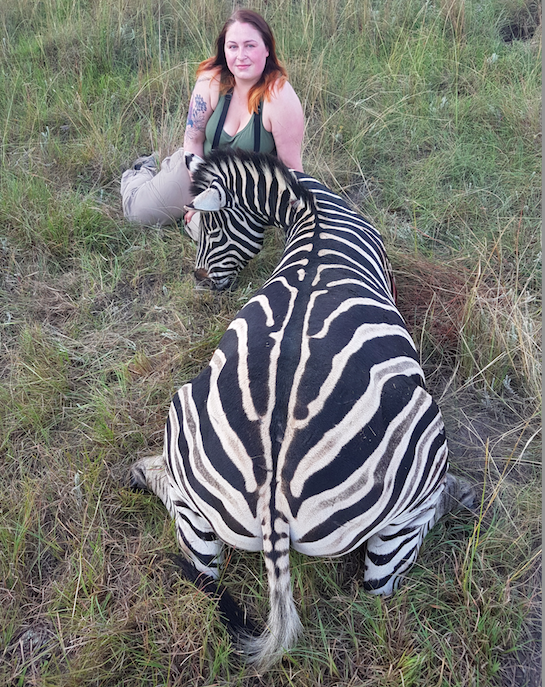 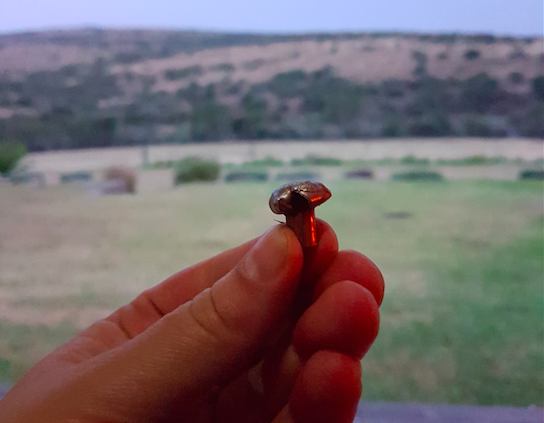 - bullet recovered from the Zebra

As we still had time to spare we decided to try for a couple of more impalas. The old guy got the first one very comfortably and I went on to get mine. I had the animal perfectly broadside and crosshairs on one third of the way up the front leg and squeeze the trigger… when it turns. bad news. My PH calls a hit, but a bad hit.

There was quite an impressive storm making it’s way up from the east, with roaring thunder and flashing lightning, and the sun was already low in the sky. We all get out to track the animal, and not a bit of blood is found. we keep tracking and nothing is found. The storm moving ever closer, when we finally find the smallest drop of blood, and the animal lying hurt nearby. We quickly finish the animal and get out of there as fast as we can, and when we reach the lodge we have a fullblown thunderstorm on our hands. (remember. Icepeople). Turns out that the animal turned as I squeezed the trigger and I shot it right up the back leg. Amazingly almost no blood trail was left, making it this hard to track. But thanks to our great Ph’s the animal was quickly put out of it’s missery.
The storm passed in a short hour or so, and on the menu for dinner tonight was a braai consisting of the giraffe from earlier on our hunt, and some buffalo meat they had from before we arrived. and very good it was too.

We spent the surprisingly clear evening exploring the night sky deep in south africa. What an amazing way to finish of our stay in the Inland lodge. 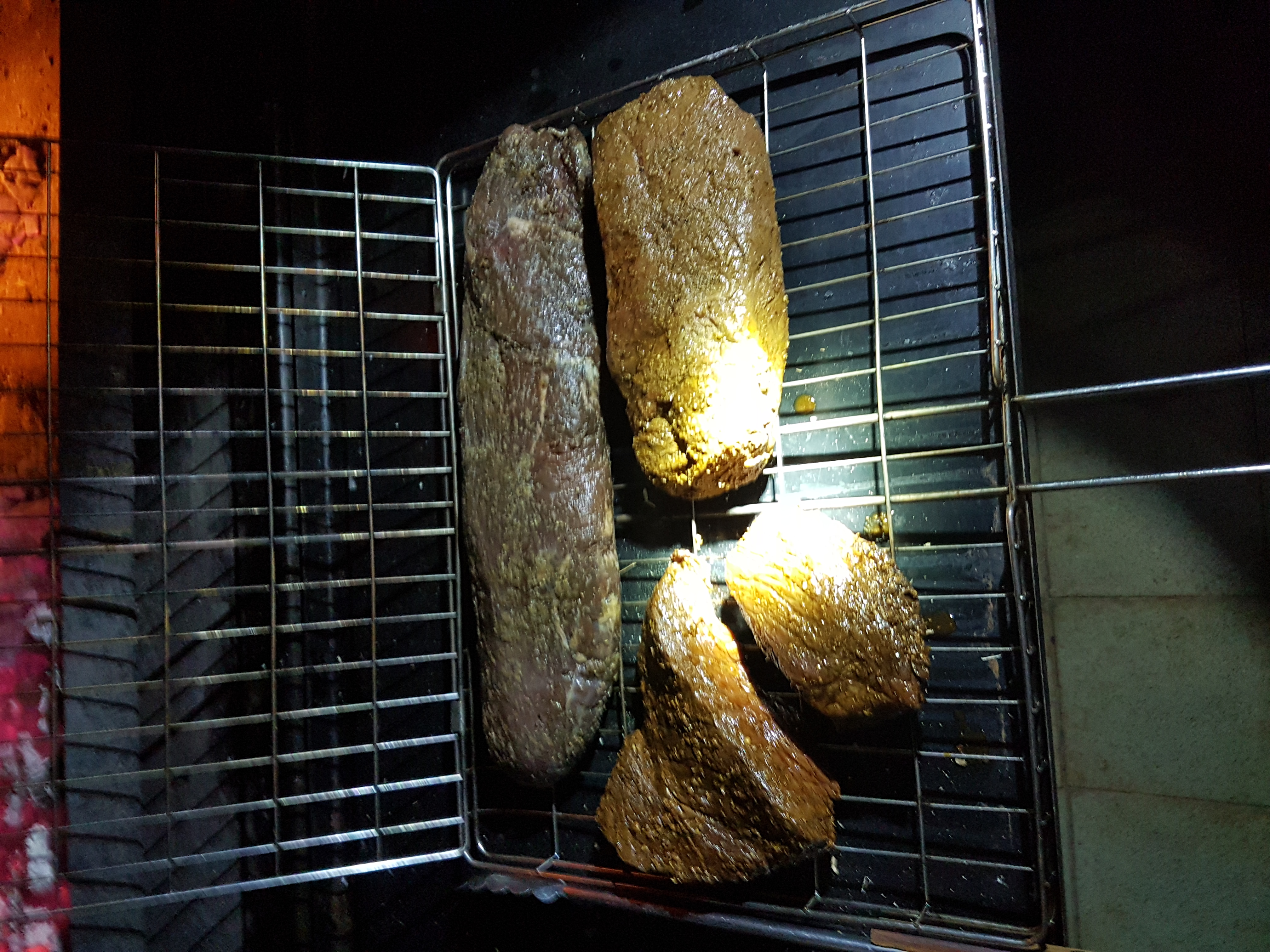 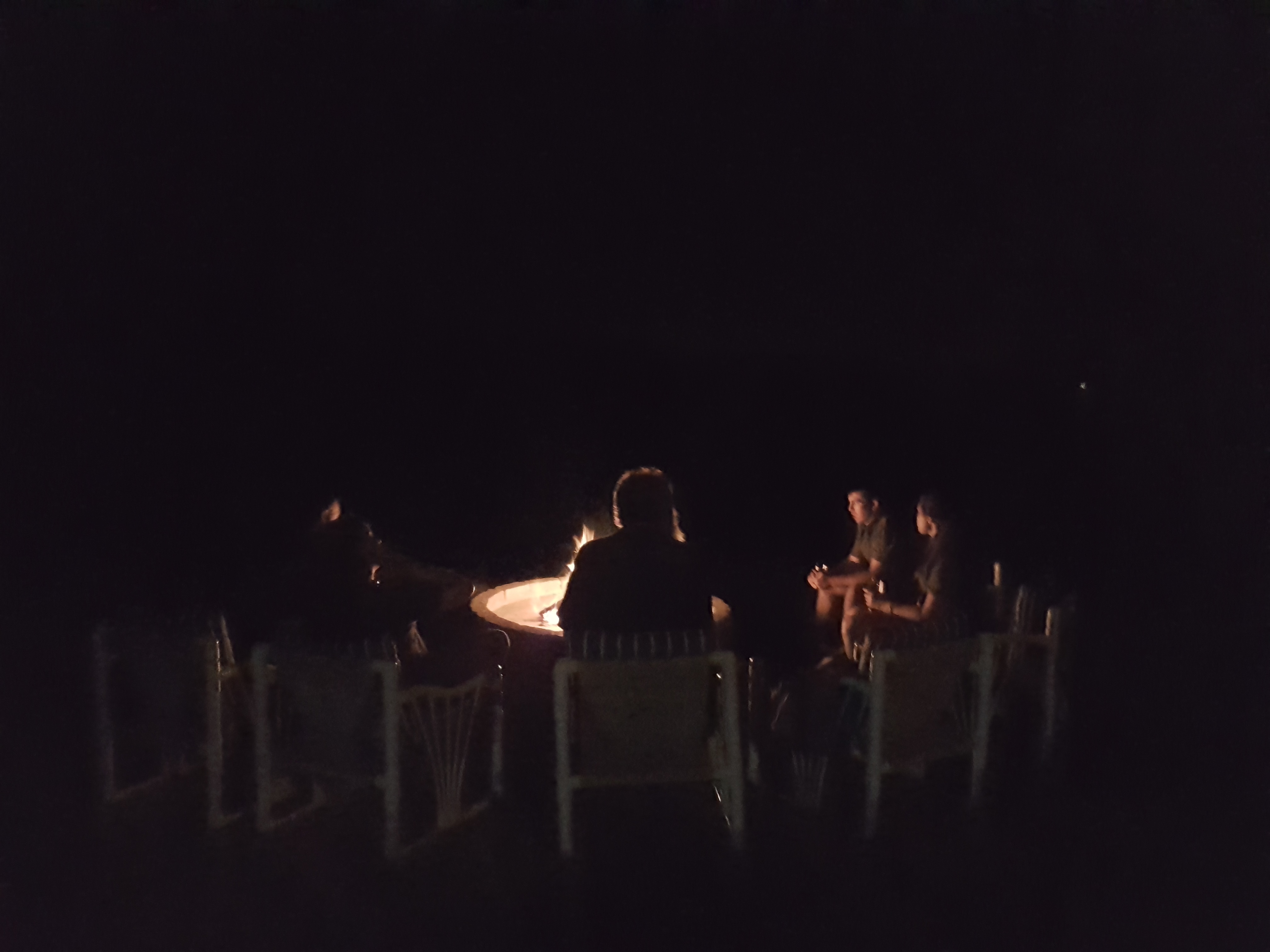 Around the camp fire.

Thanks again Lauren and Juan
News from our stay at LJ safari’s Coastal lodge to follow soon.
O

Went there had a great time shot stuff ..with people who have become friends ...
Teased some buff from the truck ...hey I am no hero with my double in the shop ....

Had many amazing dinners ....

Thanks for sharing. Fun to read it from a different perspective. Some good looking culls there too..... Bruce

The lady did a fine job providing some of the details. Thank you for sharing the story and pictures.

I followed on your heals and they clearly enjoyed hunting with you two as they had some fun stories and shared some photos. I had a good time as well and will be posting my own report soon.

Randy
Life is too short to hunt with an ugly gun

Sounds like you guys had a great time. Thanks for sharing!!

Definitely need to have both versions of the hunt retold.

Thanks for the report. I really enjoyed it. Nice cool 38C! Ya, I know the feeling.

Thanks for the report and pictures! I enjoyed it!
Africa on my mind.

Great report and pics, thanks!
You must log in or register to reply here.