We just returned home from a 10 day hunt in South Africa with Kuvhima Safaris. We purchased this hunt in 2013 through an auction (at a very reasonable price) at our local SCI Annual Dinner banquet. As many other people have expressed we to had concerns about purchasing an auction hunt and had reservations on how it might turn out. I can attest, that shortly after our arrival all concerns were quickly dashed. Everything about this hunt was top notch and first class. We were taken care of from the flight preparations (Thanks Lori at Travel Express) to the time we exited the airport until our return back to fly home.

The accommodations were very nice. They actually have 5 different lodging opportunities from tented camps to 5 star lodges. The food was excellent and the staff and camp personnel were very professional and courteous and made us very comfortable during our stay. Our PH Hannes Van Rooyen did an outstanding job with getting us on the trophies that we were after despite some issues that were presented to him like the unseasonable weather ( rain, very cold, full moon etc. ) and of course his clients being out of shape, making way to much noise stalking animals, and the shooting accuracy we displayed at times left much to be desired. Once he had all of those issues dialed in we had a very successful hunt and took some really nice animals as well as had an outstanding trip.

We started our safari in the Free State province hunting Black Wildebeest and Springbuck. Although we practiced at longer distances at home we must of had early safari jitters as we both missed shots on these animals in the beginning. After getting our heads back in the game and making a few tactical hunting adjustments we were able to connect on a few good trophies. 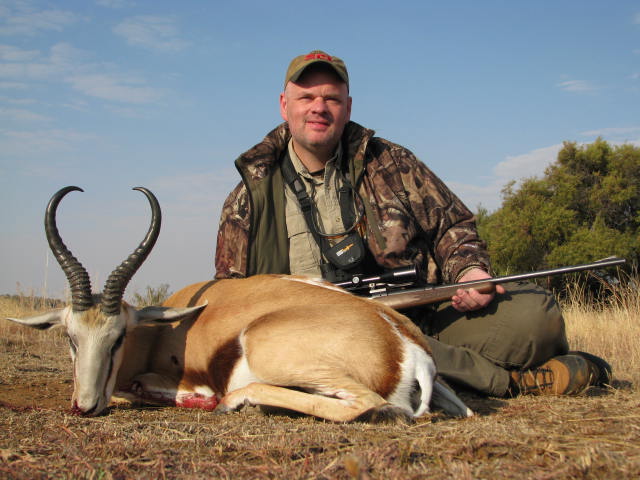 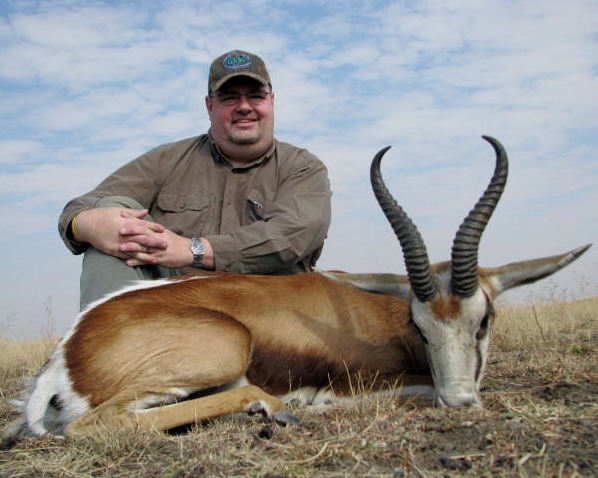 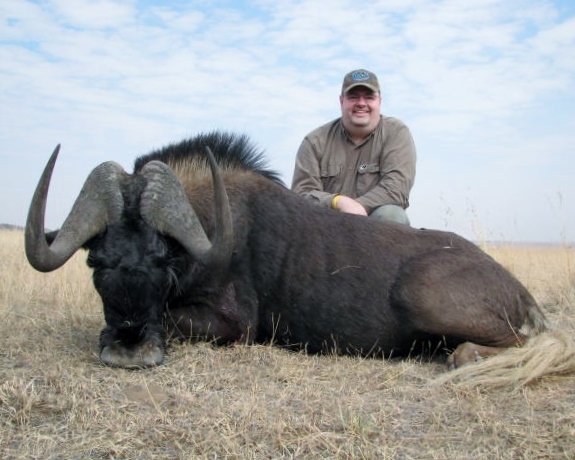 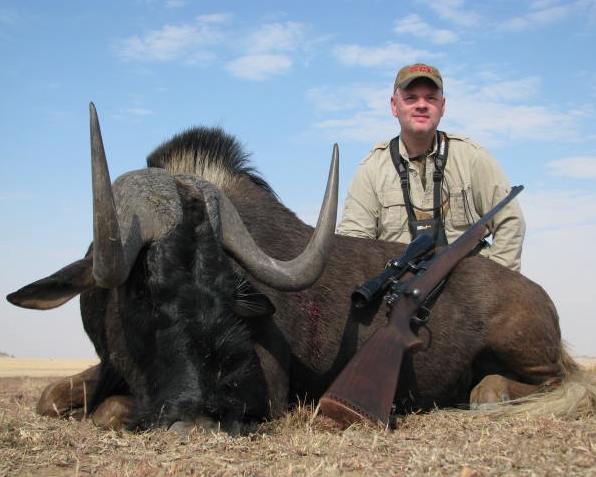 We then were able to hunt another concession and were both able to connect on a couple of red hartebeest to top off our Free State hunt. The stalk I had on my red hartebeest is one I will not forget! 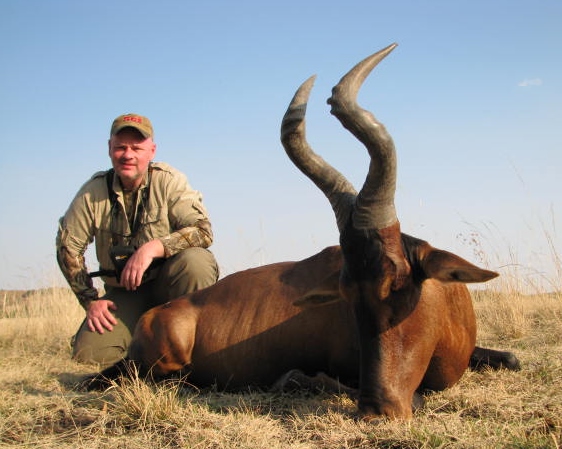 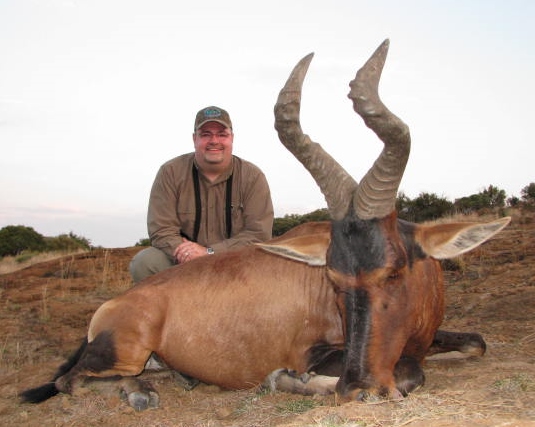 We were then off to the main lodge in the Limpopo Province to hunt other animals on our wish lists. We hunted for the remaining 7 days in Limpopo and although the hunting was tough and the weather was at times unseasonable and the full moon was not helping matters, I was able to take one of my most coveted African Trophies, the Limpopo Bushbuck 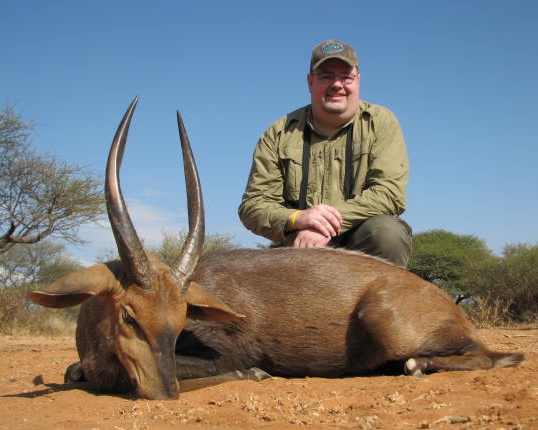 We hunted for my buddy Shane's Gemsbok for the better part of 4 days before one actually presented a clean ethical shot that he was comfortable making. Shane missed a very long shot early on day 4 but our PH was patient and even when Shane and I thought that another chance might not happen he insured us an opportunity would present itself. Late on the fourth day Shane connected on his Gemsbok. He was a very tired but happy hunter. 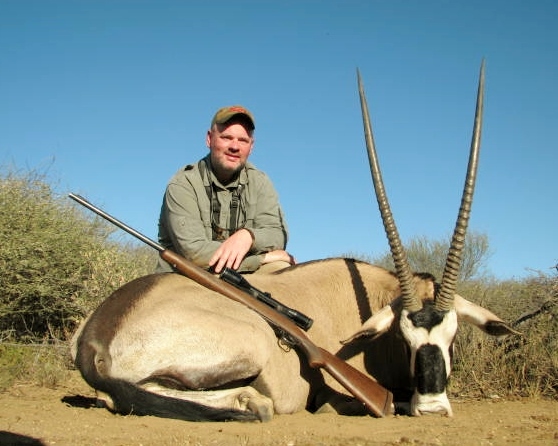 Although there were a few other animals on our lists we could not connect with I was able to take an old worn down warthog to top off our 2015 safari. 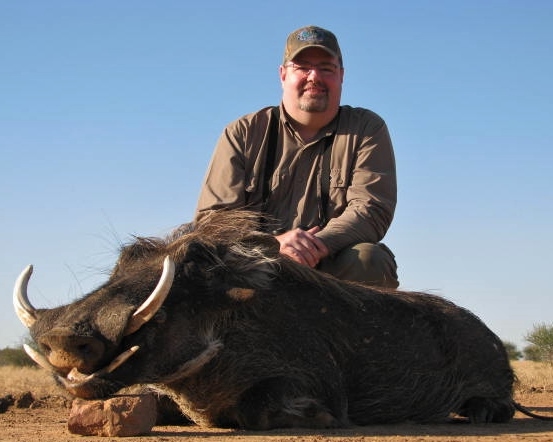 There is a lot more to this safari than just the pics of animals taken, like being attacked by wasps (Ouch!) and the black mambas (scary!) and the 14 ft python one of the PH's caught while we were in camp(Wow!), the beautiful scenery, the plethora and variety of animals seen, the great people, jackal hunting at night, great food, great beer, crocs and hippos near camp(very cool), and a whole lot of other experiences to create such a wonderful sensory overload.

This is our third safari and we are already planning our return trip back to see what Africa has in store for us next. Kuvhima Safaris delivered a first rate experience to two guys who purchased a donated auction hunt which turned out to be well worth the risk!.

Some very nice animals there, congrats on a great trip!

Thanks for sharing!!!
Life is not a journey to the grave with the intention of arriving safely in a well preserved body, but rather to skid in broadside, thoroughly used up, totally worn out, and loudly proclaiming, “Wow what a ride!“

thanks for restoring , my faith bruin, ive always held little order in donated hunts......
you guys took some great heads, mate ....
you should've typed up about all your other cool experinces , while in kunhima safaris , care......I personally love these little unexpected gifts from Africa.
thank you for sharing your wonderfull memories with us all .
THE HUNTER; The person that pays over 90% of the cost for the presavation and maintance of wildlife and gets zero credit for it ................

Thanks for sharing your report.
Another good one into the books.

Beautiful trophies. It is nice to see an auction hunt exceed expectations. R.

Thanks for sharing your hunt with us. Some great trophies taken, and I'm sure friendships formed. Kevin

The boss I already mad that I can't focus at work, your story and pic help. I'm only going to focus on Africa for the couple week

Congratulations on a great trip, excellent hosts, and wonderful trophies! Would love to see pics of the python in camp - Ann would be going crazy asking one of us to give her our rifle!

Very nice sir. Congratulations
Tommorow is promised to no one. Go live your dreams.

Congratulations and thanks for posting!

Bruinmaster said:
I was able to take one of my most coveted African Trophies, the Limpopo Bushbuck
Click to expand...

Although I have yet to hunt a Limpopo version, my Cape Bushbucks are some of my favorite trophies! Nice trophies and congrats on a good hunt!

Glad you had a good hunt.

Thanks for the report and photos. Would love to see a photo of the python your ph's caught.
And here I am, returning to Africa of many faces;.... the sloe-eyed temptress with flowers in her hair who stole my youth and my heart, and left me an old man with a kaleidoscope of conflicting memories of many dashed hopes and some fulfilled dreams. E. Echols
D

my first trip was also an auction hunt that my grandpa surprised me with after he went to a ducks unlimited banquet. we were both very pleased with the outfitter, who to this day I have become great friends!
S

Very nice Black Wildebeest, very cool hunt. Nice to hear a auction hunt turned out so good, thanks for sharing
You must log in or register to reply here.

SOUTH AFRICA: Has Anyone Hunted With Kuvhima Safaris

A
SOUTH AFRICA: BOWHUNT: Bow Hunt Well Worth The Effort

SOUTH AFRICA: Just Back From Koedoeberg Safaris What A Place To Hunt