SOUTH AFRICA: KMG What A Hunt

OK all capes backskins and one flatskin back from tanning in Montana. Had a 4 hour breakfast meeting with my taxidermist yes he made breakfast!!(yes we're friends too) layout where to hang and how the pedestal for the Kudu and bushbuck will be placed all squared up. Building the pedestal base from aged cherry myself. Glad to see everything in my hands and project started.

Excellent report . I leave to hunt with Marius on August 18. Your report can pump a guy up!
Tommorow is promised to no one. Go live your dreams.

johnnyblues said:
Excellent report . I leave to hunt with Marius on August 18. Your report can pump a guy up!
Click to expand...

Johnny you will have great time!!! Flex will give you a welcome every morning Marius is a blast and hunts/works hard for his clients.Whats on the hit list??

Gemsbok Gangsta said:
Johnny you will have great time!!! Flex will give you a welcome every morning Marius is a blast and hunts/works hard for his clients.Whats on the hit list??
Click to expand...

Starting out in Limpopo for buffalo then we fly back to the cape for vahl rhebok on a property he has never hunted. Should be interesting. Also looking for klipsspringer, bushbuck, blackwildbeest, waterbuck and springbuck
Tommorow is promised to no one. Go live your dreams.

Nice wish list you will do well I'm sure.... can't wait to see the buff you put down.

Me too! Lol
Tommorow is promised to no one. Go live your dreams.

Gemsbok Gangsta said:
I just had the hunt of my life with KMG!! 7 full days on the ground was more than enough for Marius to get this guy in front of everything on his list,of course with a few bumps and laughs along the way. I started by e-mailing KMG in July 2015 and soon the trip was on. Anyone who has hunted with KMG can tell you between Kim and Marius Goosen communication is excellent and all concerns and questions will be dealt with quickly.
My hunt started with the typical long travel from Seattle to Port Elizabeth anyone who needs a recap of that must be a glutton for punishment!! I can tell you this July 2015 to May 23 2016 is a long stretch with the type of anticipation I was carrying. Funny when I checked my rifle in Sea Tac with Delta it was with an employee who had never checked a rifle before but she did great. I better also throw Henry @riflepermits.com a much appreciated Mahalo.After meeting Marius at PE it was off to Mpunzi. A little stop for diesel,pick up Lloyd and a stop for juice and a meat pie we were off. Had to race the darkness to get a few round through the Tikka a few adjustments and all was well. I shot shot my Tikka T3 hunter in 30-06 with 165 NAB's this trip. After a great dinner it was off to bed for some fitful sleep as I was informed we were after Kudu in the morning. After a trip to Namibia in 09 and no Kudu taken you can only imagine how I'm feeling at this point.Up at 6 for a little breakfast and we were off. Not long after starting off on foot from the Toyota we jump an unseen animal in the bush yes Im excited.After a bit of paralleling a valley glassing for kudu we spotted some cows and the next thing you know a bull is in sight. After some glassing Marius explained he was not a first day first morning bull so off we go. A little later a few warthogs walk out behind us and as I thought they might spook Marius the pig whisperer did some magic and they walked back within five yards now that my friends was cool !! We spent a little while looking a bit and then off to the lodge for lunch and a little rugby on the TV. I found one thing out these gents like there rugby like I like football!! It was decided Louw would come with us this afternoon,how lucky am I 2 great PH's!! We went to a spot where we could overlook a valley and a small Kudu bull walks by. Before you know it Louw informs Marius he sees a bushbuck so off we go. Now here is this guy from western washington in shorts down the hill and up the hill trying to keep up with 2 professional hunters who are half cat half goat one thing to say I tried. Once we reached the spot where Louw had spotted the bushbuck Marius put me on the sticks in anticipation. The next thing you know the Ram is in front of me Marius says he is a shooter and down goes the first animal of my 2016 return to Africa,the hardest trophy on my list on the first day!! I can only tell you wow what a day and more to come.....

Mounts are very close to being complete. Pictures soon

Very cool. My mounts are in Bend right now. Should have them by the end of the year I hope. Also going with a pedestal for my Kudu. I’m down in Eugene 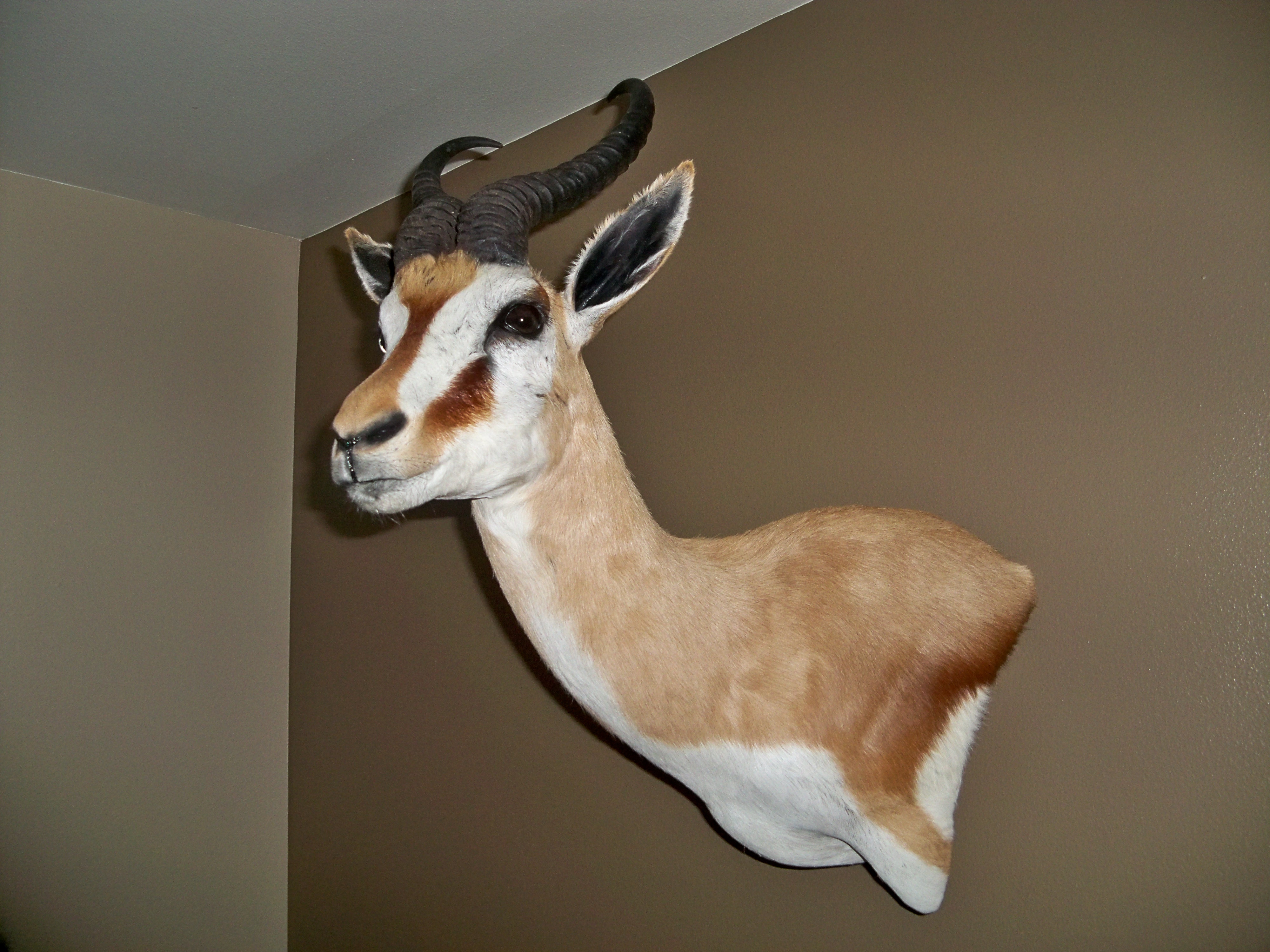 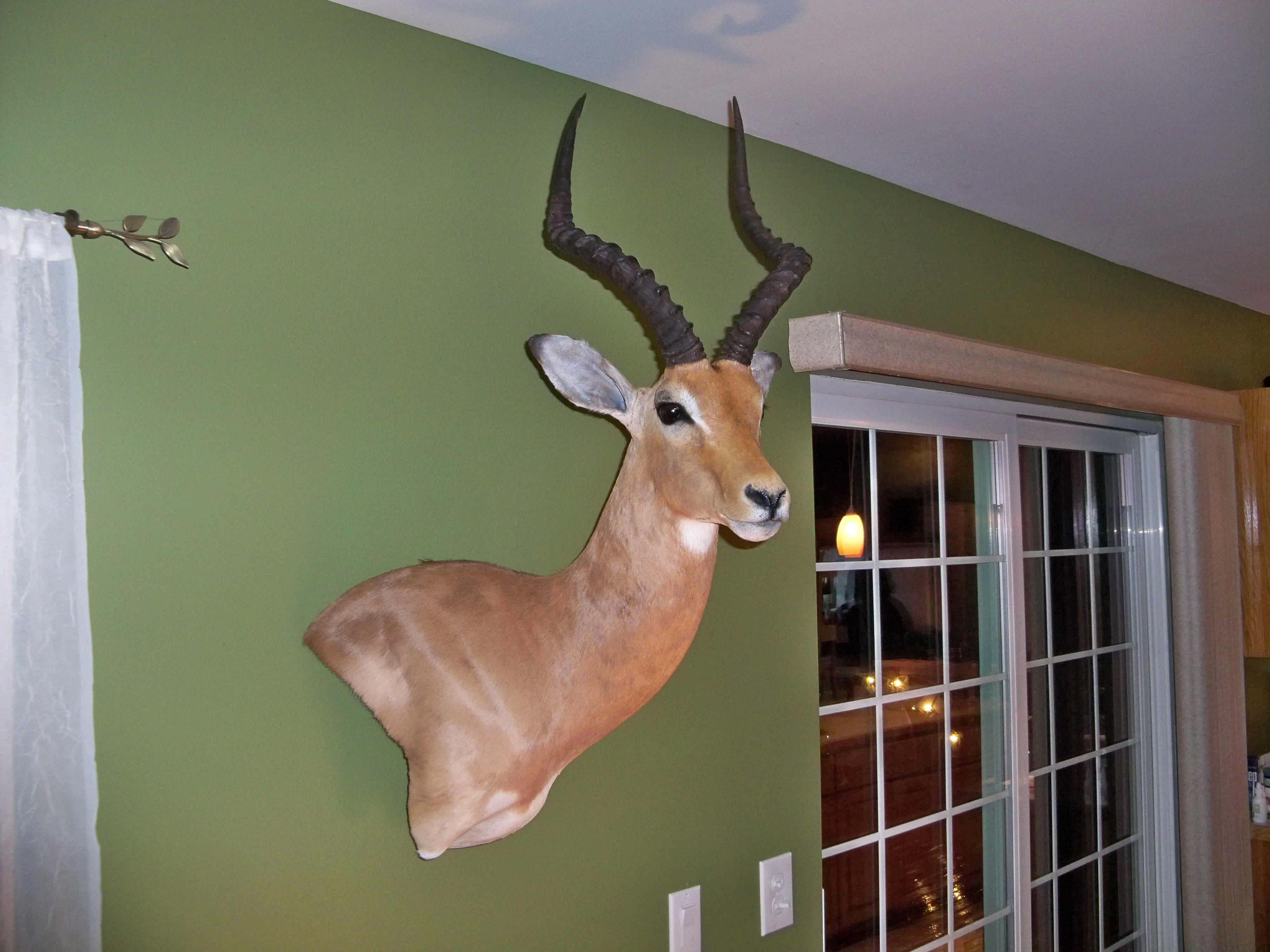 The Springbok and Impala are home. The rest are done and will be picked up Monday!!!!!!!!!

Exciting times! We look forward to seeing the rest!
John 3:16 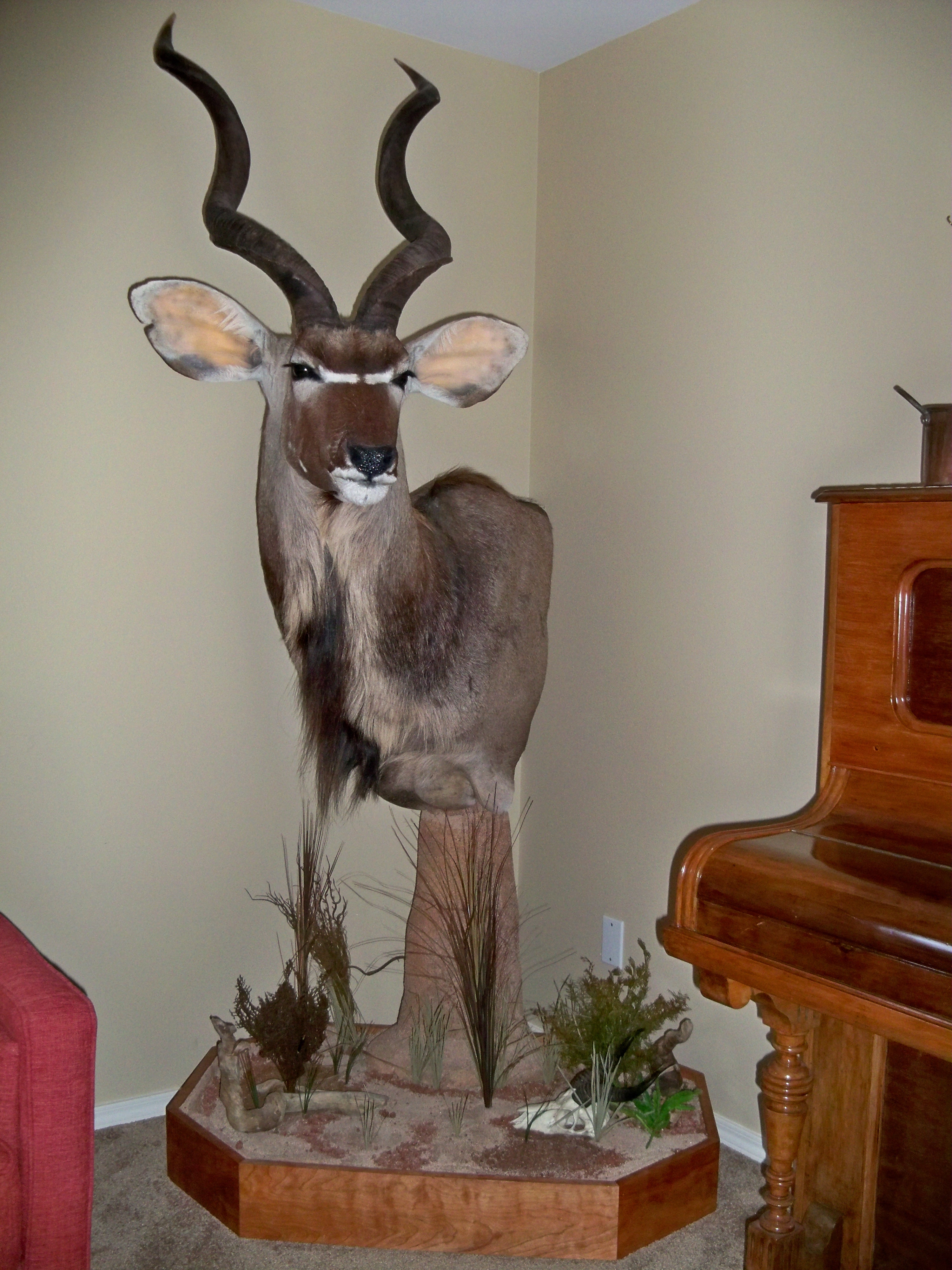 Looking good my brother.
Tommorow is promised to no one. Go live your dreams.

Last 2 coming up..I bet Marius remembers this Blesbok or maybe the less than stellar shot his client made at 84 yards!!! I think he's jaw shot I gotta get the dogs!!!!! 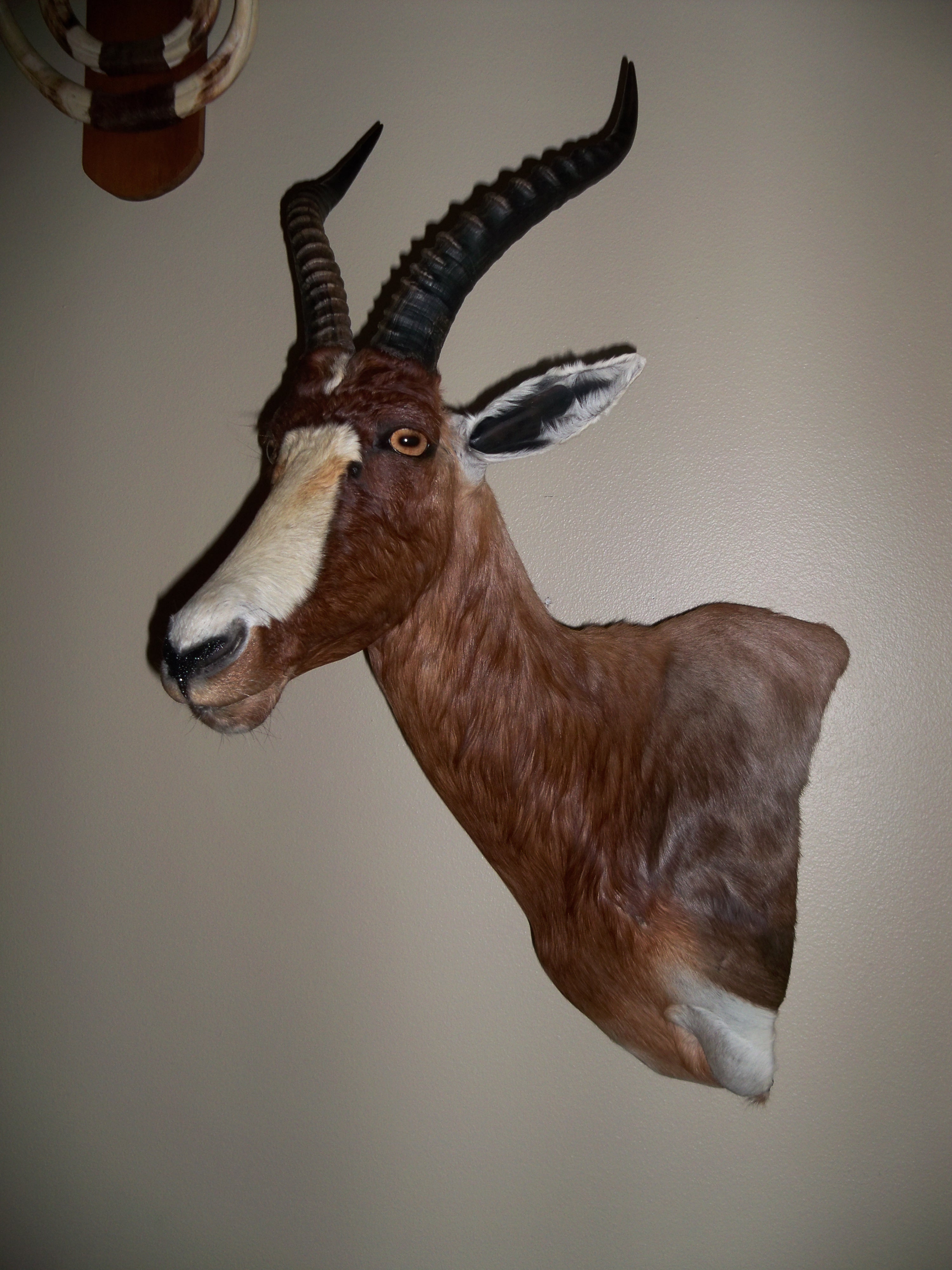 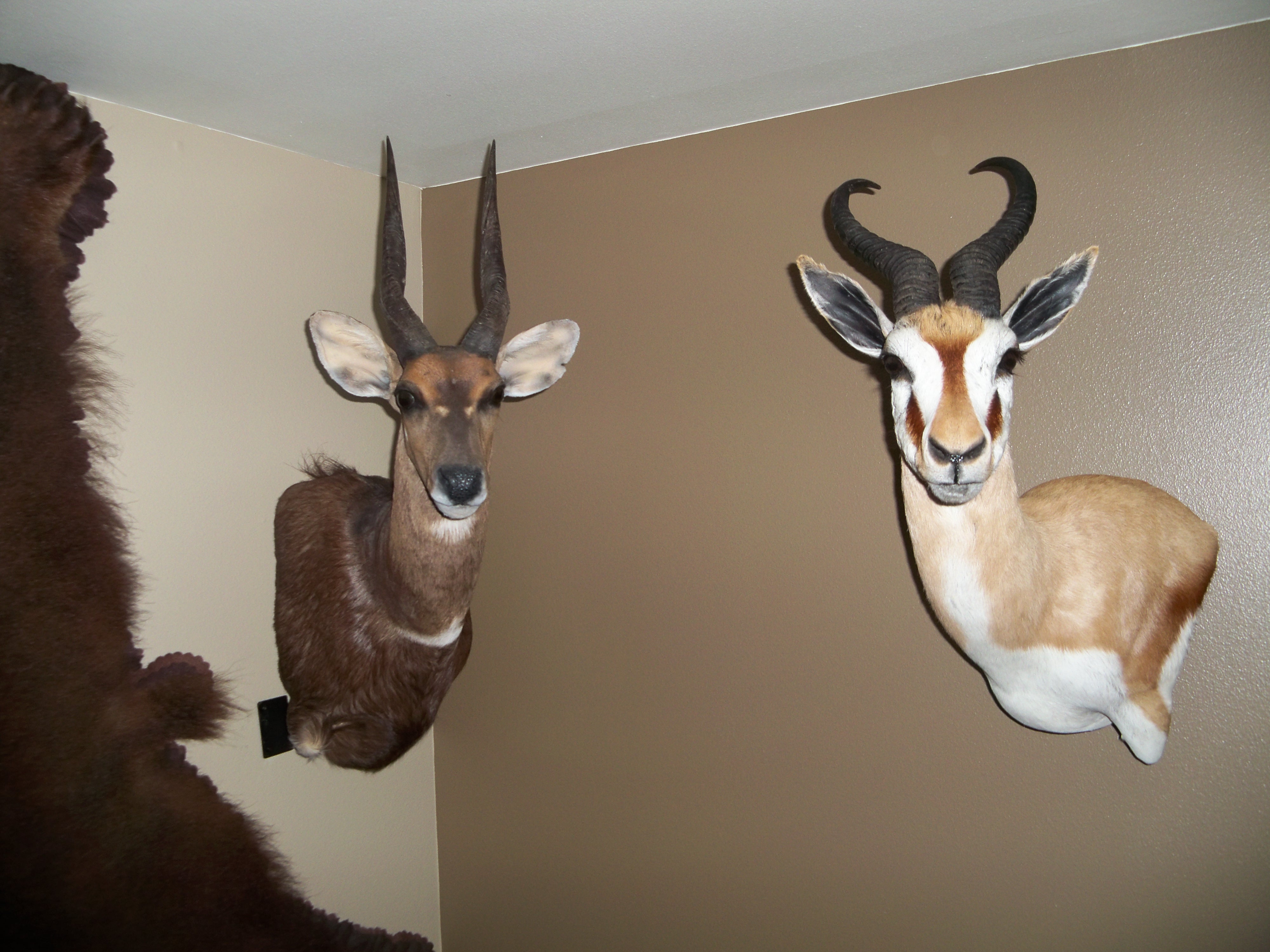