Going to skip right to the report as most know the travel is long and tiresome but worth it.
Day 1
Meet Marius at Port Elizabeth airport introductions and off we go. We chat and talk about hunting and I ask a thousand questions. We stop off for lunch at a nice little place and I have the warthog pie it was very good. After lunch we drive on to the lodge. Get luggage put away and off to the range. I’m shooting Marius’s Ruger 300 win mag. Couple shots 1.5 to 2 inches high @ 100 yards good to go. Back to the lodge for dinner and then off to bed.
Day 2
We drive about an hour the next morning to a nice property and Marius talks with the land owner and we pick up a local tracker. Not long we spot some warthog stop and glass but the boar is not a shooter so on we go. About 30 minuets later comes the familiar tap on the roof. Kudu are spotted. Marius and the trackers look them over and find a good bull. Marius says get the rifle and I’m on my first stalk. As we are walking along on one hillside and watching the kudu on the other. We are walking in an old 2 track road and trying to keep some cover. Maybe 30 to 40 minutes in to the stalk Marius and the local stop dead on their tracks and I follow suit. We are behind some cover and I can’t see what’s going on. I see the sticks being set slowly and Marius tells me there are some impalas in the clearing just ahead and I move forward and get on the sticks Marius says the one in the front facing to our left. I settle in squeeze the trigger and shot breaks clean and the impala bolts. We go and to where to impalas we’re standing and don’t see blood right away but the local tracker signals us he has found blood. We follow it up and there lays my first African animal. I could jump over the moon I’m so excited. 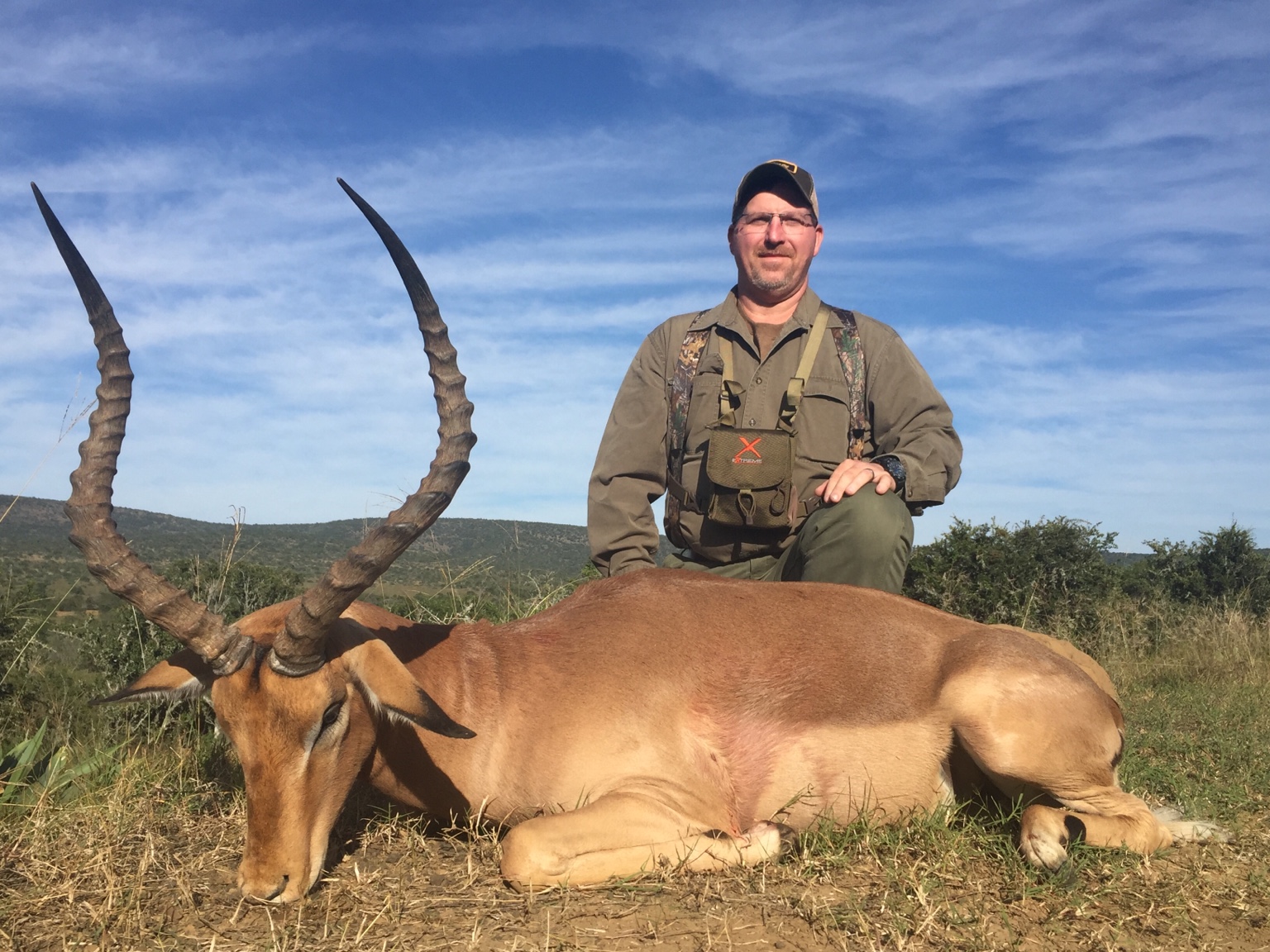 So after pictures we set back out after the kudu. We spot them off and on through the brush. We work slowly with the wind in our face and with the cover. It takes about 2 hours to get to a place we can take a shot. While working the last few yards into shooting position a steenbok comes running from our left to right. Thinking that this little fellow will blow the stalk but he does not. All good now, nope here comes warthogs from the same place the steenbok comes from. We let feed on past us and get out of the way. Close in a few more yards. Sticks are painstakingly slowly set and I ease up to the sticks Marius says he is standing under that biggest tree in the shade facing to our right. I get on the sticks steady myself and squeeze the trigger shot breaks and the kudu starts stumbling forward and down he goes. This is the animal I’ve waited 40 years for and killed him before lunch on the first day. UNBELIEVABLE. Hand shakes, high fives and pictures then off to skin the impala and kudu. 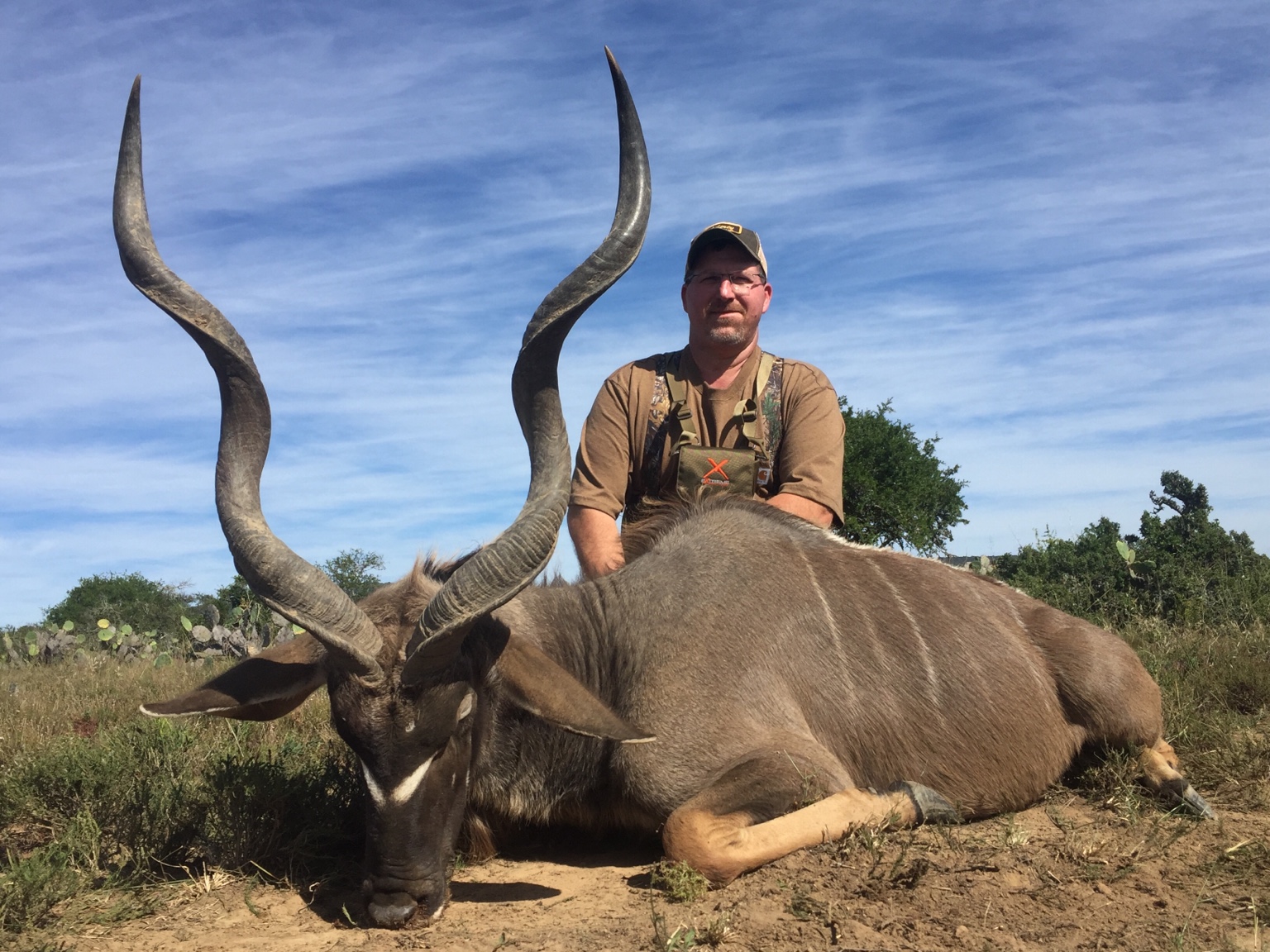 We go to the skinning shed and Lloyd and the local tracker skin them while we have lunch. After they get them skinned they eat some lunch and I’m thinking this can not get any better and we are probably going back to the lodge and have a few cold castle lights and kick back. Wrong. Marius says you have Red Hartebeest on your list so let’s strike while the iron is hot. Me, I’m good with this. So we go to another part of this massive property in search or Red Hartebeest. About an hour goes by and that tap on the roof again. We glass them and determine that there is a shooter in this bunch so off on another stalk. I little bit into the stalk we run in to some kudu and have to back pedal a little ways so we don’t spook them. We start out on our new path around the kudu and run into some warthogs. We let them feed on past and resumed our stalk. We spot the Hartebeest on hillside opposite us. We leave the trackers here and Marius and I start downhill across a small valley and up the other side. We are just about to come out of the valley and Marius peeks over and ducks back down and gets the sticks and starts setting them. I’ve not seen the Hartebeest yet. He peeks back up and says get on the sticks. I get on the sticks and he asks me if I can them. I say yes but there is some brush in the way. He slowly moves the sticks up and we’re good. Marius says wait and tell you which one. He finds the one and says when your ready. BOOM. And as Jerry Clower says down ole Della went graveyard dead. Hartebeest never moved out of his tracks. Third animal on the first day of hunting Africa. In the words of Marius we just turned a good day into a hell of a day. Dang skippy. 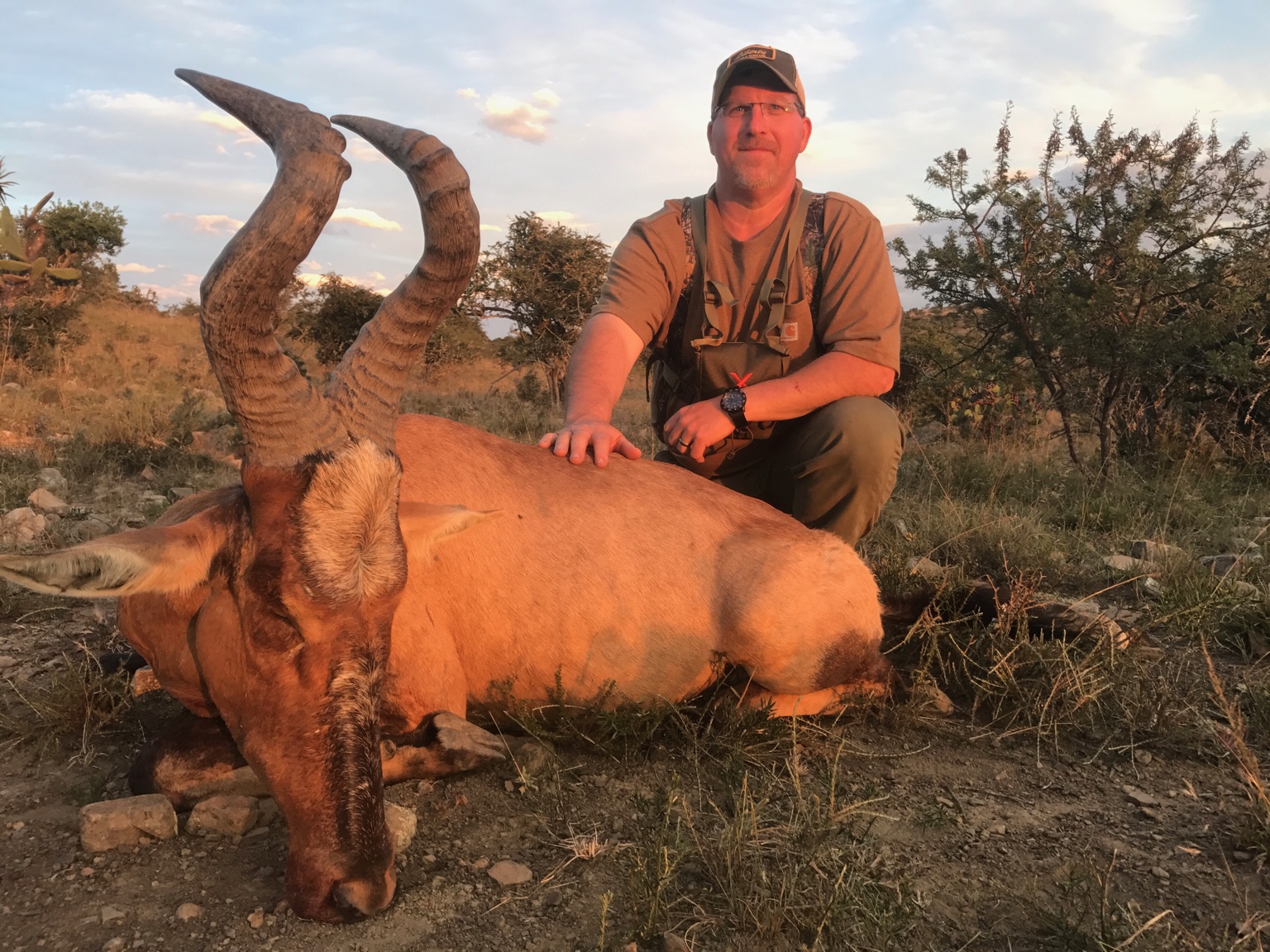 Well I can already see that trying to do this from my phone is not going to good. As there are some spelling mistakes words that are not right. Guess that what you get when you mix a hillbilly and smart phone. Oh well I think you will get the idea of what I’m trying to say

Congrats!! Great report and great trophies!! I love the Jerry Clower reference. One of my all time favorites!! Just listened to that story the other day. Bird hunting at Uncle Versie's!!!!

@KMG Hunting Safaris runs a great operation.
on the ocean or in the bush.

Great first day! Congrats
"There is nothing so good for the inside of a man as the outside of a horse."- Winston Churchill

I'd say you had a great first day. Congrats.

Hey, I thought that I was going to be the first hillbilly to grace KMG!!! Beautiful kudu...if Marius can find me one like that in July, I'll be one happy guy!!!
"I don't need to shoot farther...I need to hunt closer." - G. Sitton

Love that impala! The hartebeest has a unique blonde patch on his forehead-a red with blonde! Your lucky day

Nice Impala
Be Yourself Everyone Else Is Taken

Dang. You are mowing them down! In 2015 I didn't kill a animal until late in the 3rd day. Nice trophies. Marius runs a good operation. Lots of good opportunities. Congrats
Bruce

What a first day!! Congrats on a great group of animals! Can't wait to hear the rest.
JasonY

great start to your hunt. That is a dandy impala

Holy first day! Marius is a passionate hunter so it doesn't surprise me he didn't let you take the afternoon off
"When my friends tell me that I have led a remarkable life, I have to admit having done my best to make it so" - John Kingsley-Heath

Awesome animals, congrats! I'm there in 50-something days and this is doing nothing to help with the wait!!

Any man who quotes Jerry Clower is gonna have a great hunt. "Just shoot up in here, one of us got ta get some relief..."

Congratulations on some fine trophies. I hunted with Marius last August and can’t wait to get back in the near future. Great operation and Marius hunts hard.
Tommorow is promised to no one. Go live your dreams.

Heck of a first day!
You must log in or register to reply here.