Day 3 was also spent in pursuit of what was becoming my nemesis.With 2 trips under my belt now Kudu have been the most difficult trophy to obtain but man do I love hunting them.
I was on the sticks at one point with a nice bull in some thick bush that for the life of me I could not find in the scope.The instant that I finally found him in the scope he busted out of there with no chance for a shot.
The day ended with nothing to show for our efforts but sore feet and great big smiles on our faces.
Any day hunting Kudu is a good day!!!
Dan also put his 2nd trophy in the salt! 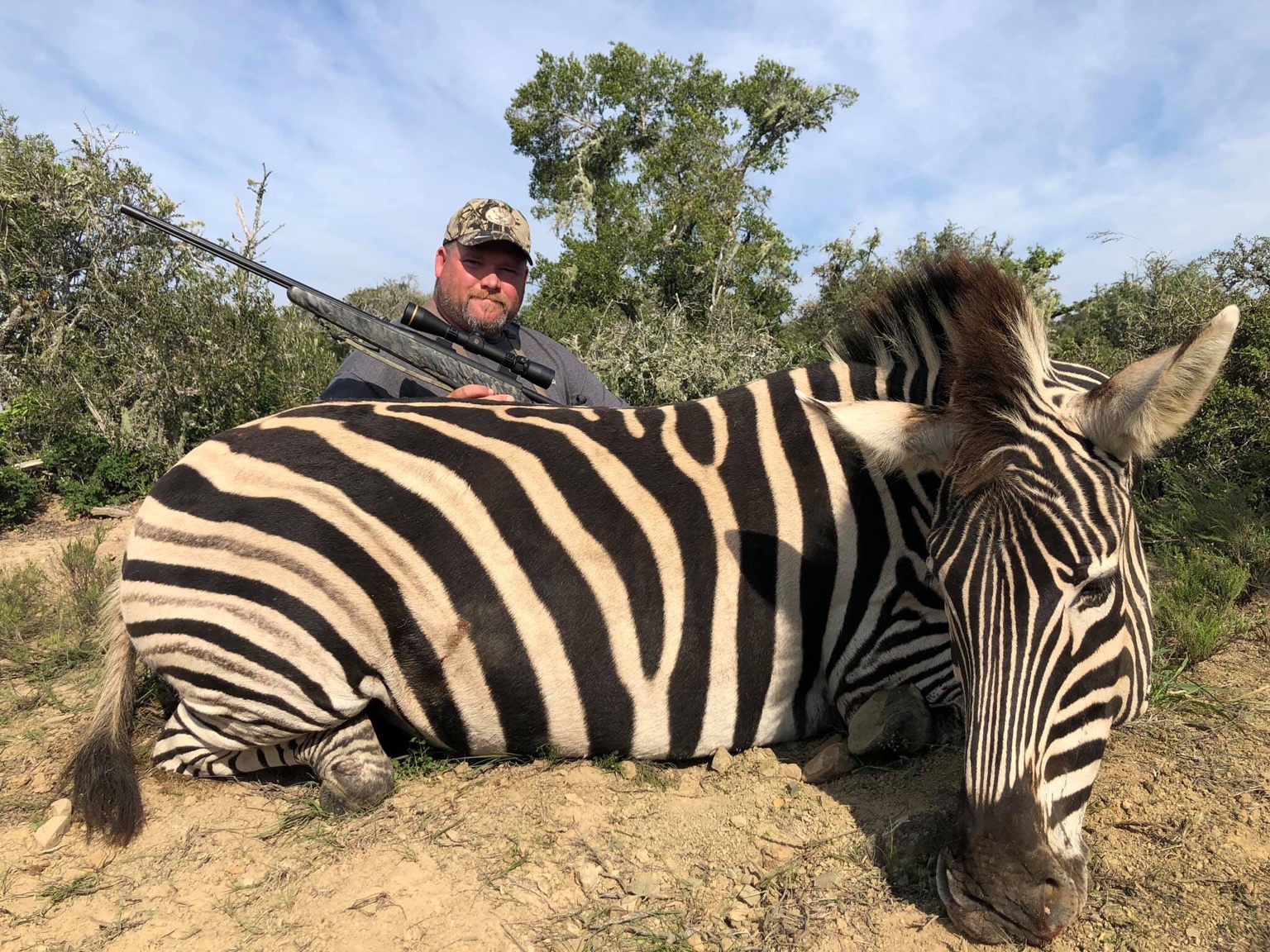 Trap123 said:
Up at 6 o’clock for a light breakfast and off we go. This was my the first trip to Africa for my friend Dan and he was just about ready to come out of his skin!!
We were after Kafue Lechwe today and Nick said we were looking for one specific male that had been spotted on a previous hunt.
We were glassing the creek bottoms and it took us awhile to find any Lechwe.
Finally we spotted a couple and went to get a closer look and after a couple of minutes determined that they weren’t what we were looking for so we went back to searching.
It didn’t take us very long and we could see 2 different groups and one of them had what looked to be a nice ram so after a fairly lengthy walk and a lot of glassing Nick says that he was a very nice ram but not the one we were after but let’s go have a look at the other group,maybe there were more that we couldn’t see.
After another long walk and then what seemed like 10 miles of crouch walking ( which is not nearly as comfortable as it sounds)we get to a bush where we could look over the group undetected.After a few minutes all of a sudden there was some excited chattering between Nick and our tracker.
I was looking at a ram that was bedded that looked pretty good to me but was clearly a little smaller than the one we had already passed on so I wasn’t sure what they were looking at.
Nick said he thought the one we were looking for was behind a bush to the left of the bedded ram so we had to back out and get to another bush with a better angle.
As soon as we get to the bush and Nick looked through the binoculars the sticks went up.
I still haven’t seen the ram yet but the second I moved from behind Nick I could see that he was much bigger that the ones we had already seen.
The shot was only 125 yards so no great story there,and he dropped where he stood.
This was the first animal that I had taken with my new custom 308 Norma Mag and I am new to handloading so I was pretty pumped up about that.View attachment 291336View attachment 291337View attachment 291338
Click to expand...

Is that the young Neuper guiding (Nick)?

No kidding that is a fine Kudu bull!!!

Thanks for posting. I'm looking forward to the rest of the report. Very nice trophies so far!

Day 4
We hunted a property that Marius had seen a nice Kudu the day before.
We made our way to our first vantage point overlooking a valley and within 5 minutes a warthog walks out at about 175 yards.
Up go the sticks and bang goes the rifle but the shot was too low and hit him in the front leg so we hurry back to the truck to get Bruno the tracking dog and within minutes the he bayed the pig in some thick brush and quickly it was over 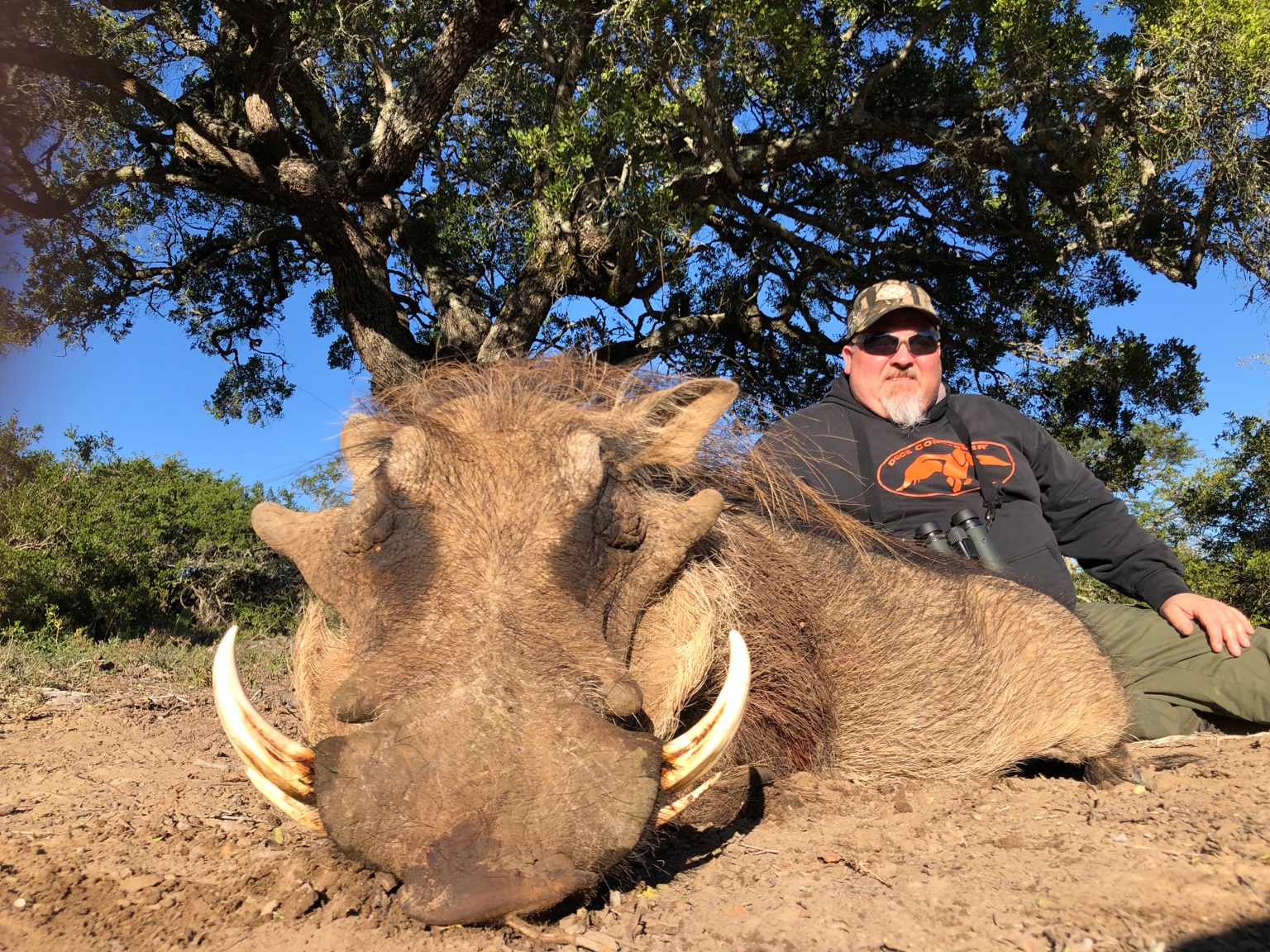 Without the dog I believe we would have stood no chance of recovery.
On the way to the skinning shed a nice bushbuck was spotted out in the wide open so we kept driving a bit down the road and tried to sneak back.
We got there just in time to see him disappear into an island of bushes, so I got on the stick to wait for him to come out.
We waited.....and waited....... and waited.I stayed on the stick for over an hour and all of a sudden he trotted out into the open and laid down with his rear ended to us so no shot.It took probably another 20 minutes to maneuver into position that gave me a 200 yard shot but the way he was positioned the target was very small.Luckily there was no rush so I was able to get very comfortable and took the shot. 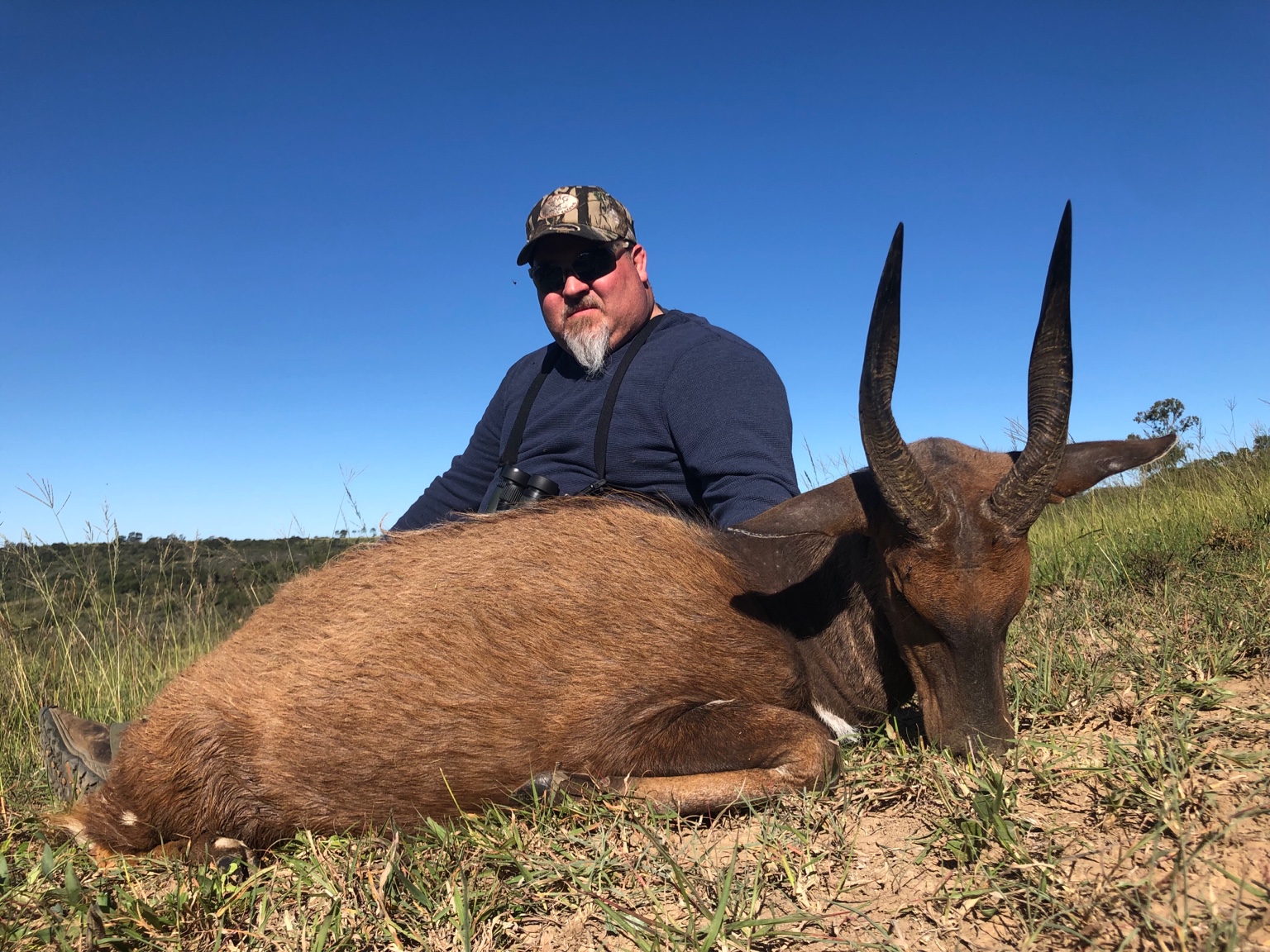 When we got up to him we could see that he was ancient.His teeth were just about gone and he only had one eye.

Off to the skinning shed we go and take a break for lunch.
Now the hunt resumes and before long a nice Kudu bull was spotted and in order to get a shot we went back to the exact spot where we had gotten the warthog earlier except this shot would be much longer.
At 300 yards I wasn’t comfortable shooting from the sticks so I got prone and used my binoculars for a shooting bag(not the best choice by the way)
After some fiddling around I settled the crosshairs on the shoulder and pulled the trigger............CLICK!!!!
Somebody forgot to chamber a round!
Now panic sets in as I cycle the bolt and watch him start to walk away!
He stopped at 335 yards quartering sharply away and in my current state of panic I rushed the shot.
Now as this is a family forum I won’t mention exactly where I hit him but rest assured whether we get him or not his gene spreading days were over.Not my proudest moment

Once again Bruno’s services were needed and once again Bruno had him bayed within minutes. When the Kudu turned to face the dog he gave me a broadside 170 yd shot that I made good on and that debacle came to an end! 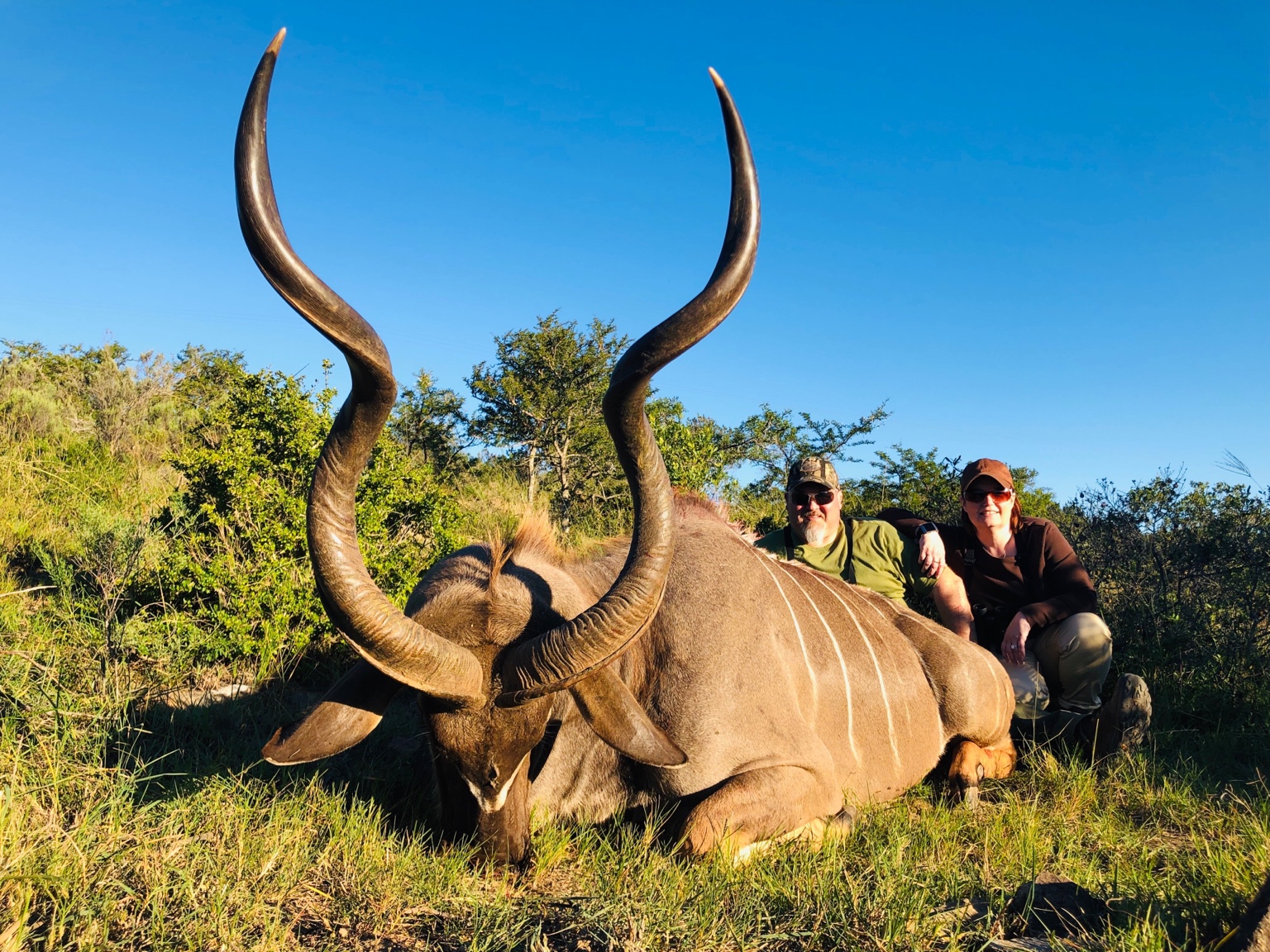 Another very nice Cape Kudu brought to you by KMG Safaris

He would end up measuring 50 inches which was a bit bigger than the Southern Greater Kudu I got in Namibia on my first trip.

kgesch said:
Is that the young Neuper guiding (Nick)?
Click to expand...

That is Nick. He is a heck of a hunter and judging from his photo shoot an aspiring photographer!!! 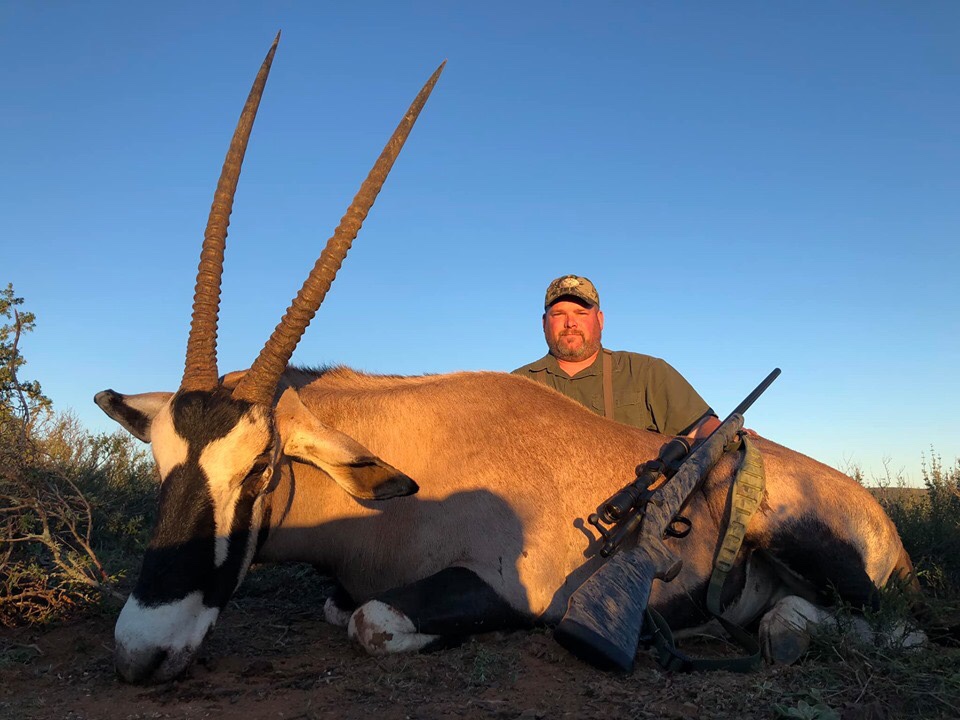 Congratulations on a great hunt!! Nick's brother Martin was the PH for the hunt that I booked for my wife Dena and I. They are both extremely good PH's, and they really sweat the details when they are taking pictures. We hunted closer to East London, out of Outspan Lodge, from 24 June - 5 July. We both want to come back and hunt with KMG Safaris again.
T

Great stuff Trap123.
You must log in or register to reply here.