I booked this as an offered special on this site. My target species were Kudu, Nyala/Waterbuck, and Bushbuck. I opted for Waterbuck and inquired about Gemsbuck if time permitted as I've loved the species for 30+yrs. This was a late season hunt, the last week of Sep'19.

I met Marius at the Port Elizabeth airport in South Africa. (This was a long haul, flying from Hawai'i USA). Due to a booking complication, I didnt bring my rifle, instead renting my PH's a Ruger 77 in 300 Win Mag with a suppressor. After arriving at the lodge near Grahamstown, we got the rifle out and checked it. It only took me 2 rounds to know this gun was dead on 2" high at 100m, as described by Marius.

The next morning we set out after Gemsbuck. All of these animals are free range. While the lands we hunted had perimeter fencing, it wasn't anything that was keeping animals in or out. Impala, Kudu, even Eland cleared them with ease. Cape Buffalo just blew right through... Warthog, Gemsbuck and the like went under. One area was 50K acres... Ample area for animals to disappear in as we quickly discovered blowing 5 stalks the first day. We did find a stellar Gemsbuck bull later in the evening, blew that stalk too (don't underestimate the visual acuity of these animals, and you better believe they knew you were there before you saw them). We did finally lock onto a stellar specimen late in the day but as we closed the stalk I came across another gems that was in rough shape. I opted to take this old warrior as it was well past prime, possibly not making it into the summer. The antlers were heavily worn and broken and the gems was not very mobile, ultimately I decided that was my animal and Marius reluctantly concurred (he has lofty standards). My Kudu Bull took 2 full days of hunting, we covered an insane amount of country looking for a "proper" bull. After spotting a group of 3 big boys we spent the next 2 hours trying to get into position. They spooked and it took quick action by Marius and some genuine marksmanship on my part as our target bull was running, quartering away 280m, downhill significantly, in a valley, he paused for just a second before jumping the dry creek bed and that was the break we needed to close the deal. The Bushbuck was ridiculously hard. Hours of glassing to find one, repeated stalks blown then we even had to completely change areas as we ended up all the way over by Port Arthur. With evening light fading we spotted a genuine monster ram and ran to get into range for a further 200m belly crawl, we maneuvered to get under a tree and as Marius lay across the ground in front of me and I shot right off his back. The Waterbuck... Oh my. 3 different properties and last possible light. 2 minutes more and I'd be telling you about the amazing bull we tried are best but outsmarted us. We must have passed an several huge bulls across the couple days. SCI Bronze and even a Gold (we can do better, he says... REALLY, I said - Translation: don't guide the guide). It was getting dark quickly, 9 Waterbuck... All females and a couple Jr bulls. Then 2 younger bulls... Then.. Marius says, "THERE'S THE CHIEF!!!" We run just a hair under 2 kilometers... Yes RUN - a full out sprint. Ran through a creek, though a marsh, through 30m of thorn bush that ate me alive and out onto a low-land meadow. There's an All-World Sable Bull, 6 warthog, impala, and we worked feverishly passed them all to get into position. The Sable Bull alerted, the Waterbuck ran about 10m to his right and stopped, perfectly broadside. The sticks went up and I lost a friendly $20 wager. (Bet my PH I could anchor the bull woth 1 shot where he stood). The shot was pure but he still ran over 100yds. I was told they're one of Africa's toughest to anchor but I was supremely confident I could get it done. At least the bull found the 1 dry spot in the marshy meadow.

The 7 day hunt was amazing but it was only the cherry on the sundae of a spectacular experience. Marius and his team deliver a real African experience. I saw so many animals from Cape Buffalo to some of the tiniest animals, giraffe and zebra (regular and mountain), impala, birds, lizards... The only thing we didn't see was Elephant and Rhino but they were in the area, we just didn't look hard for them. I'm sure if I made it a point, Marius would have obliged me. We did plenty of sightseeing and photo safari time. The food was incredible... I mean insanely good - Kudu steaks, Impalla Fillets, etc...the camp cook could easily open their own restaurant and doing extremely well. The accommodations were pretty special too. I don't know what he could do to improve his operation. Marius goes above any reasonable expectations to ensure your happiness - a true 5 star operation from booking to send off and even follow up after you get back home. I hope to get back with him real soon. 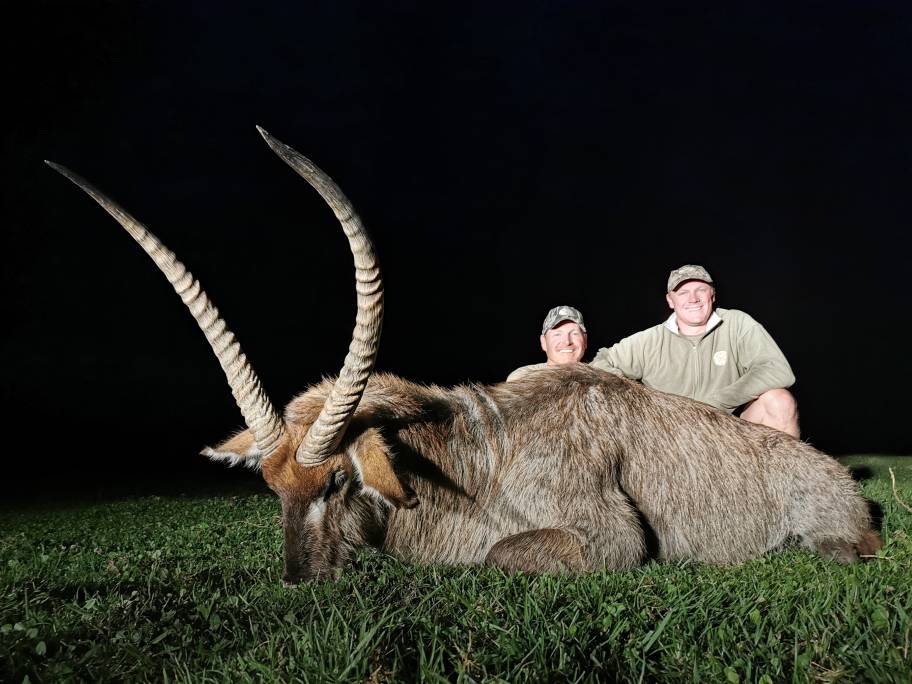 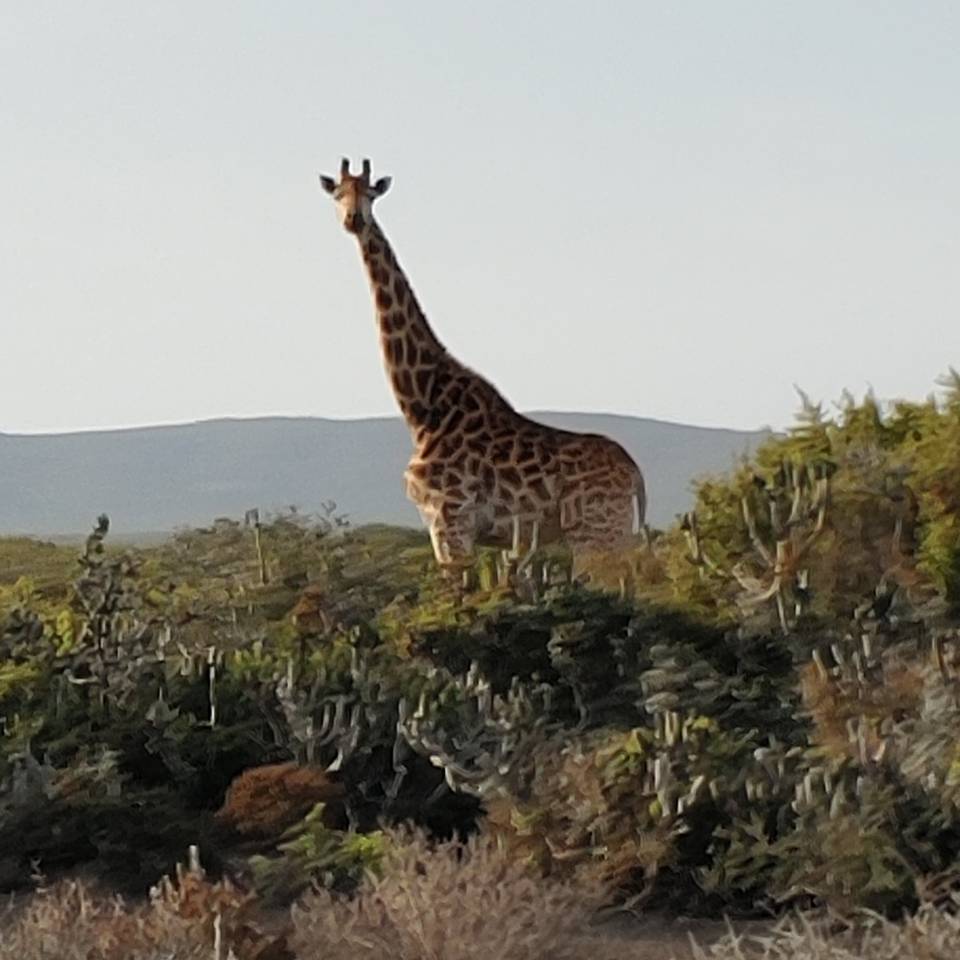 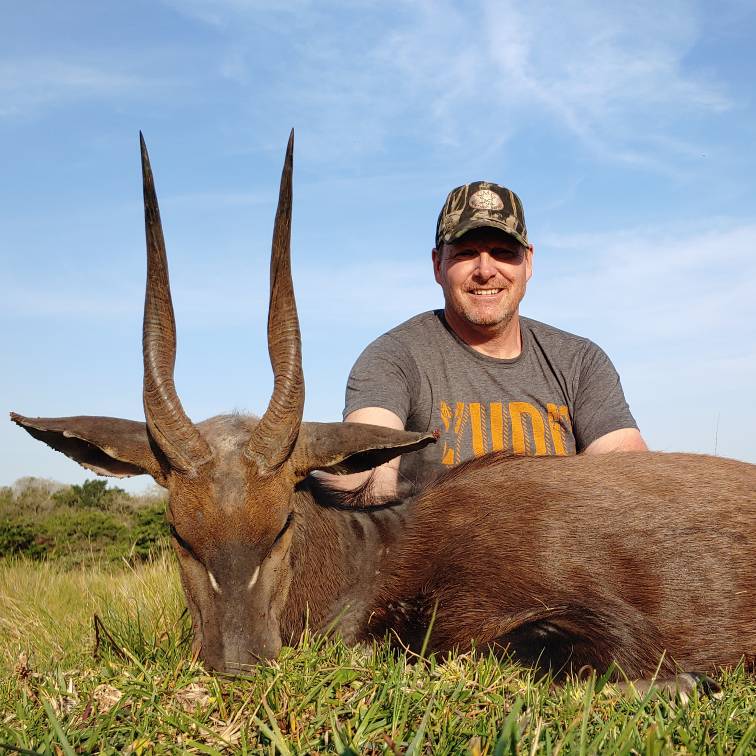 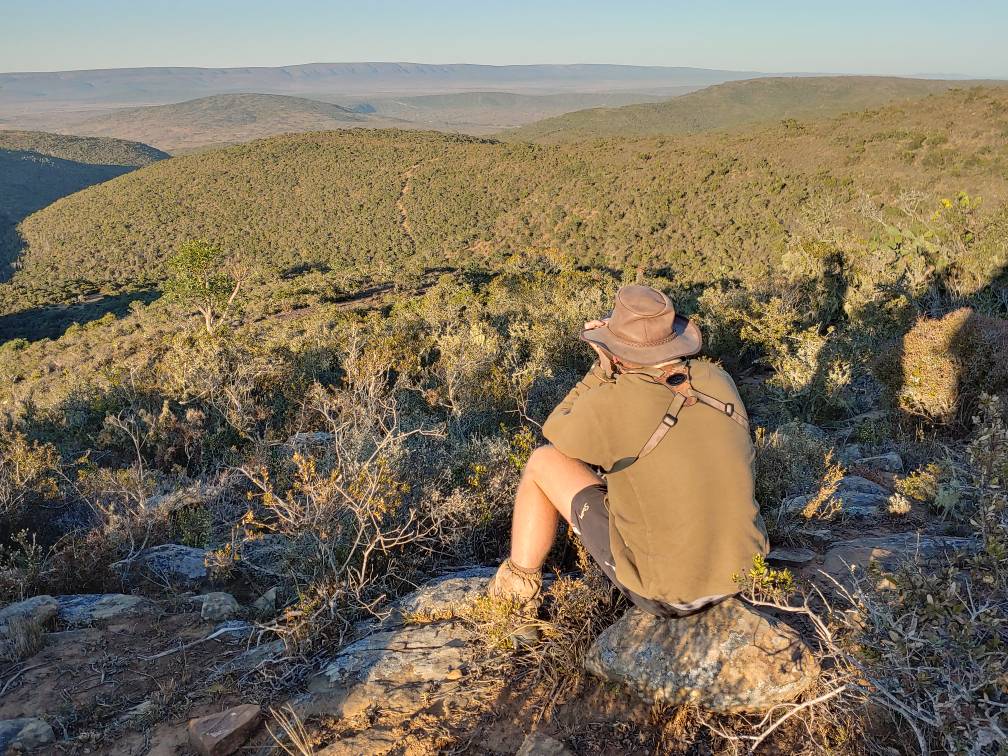 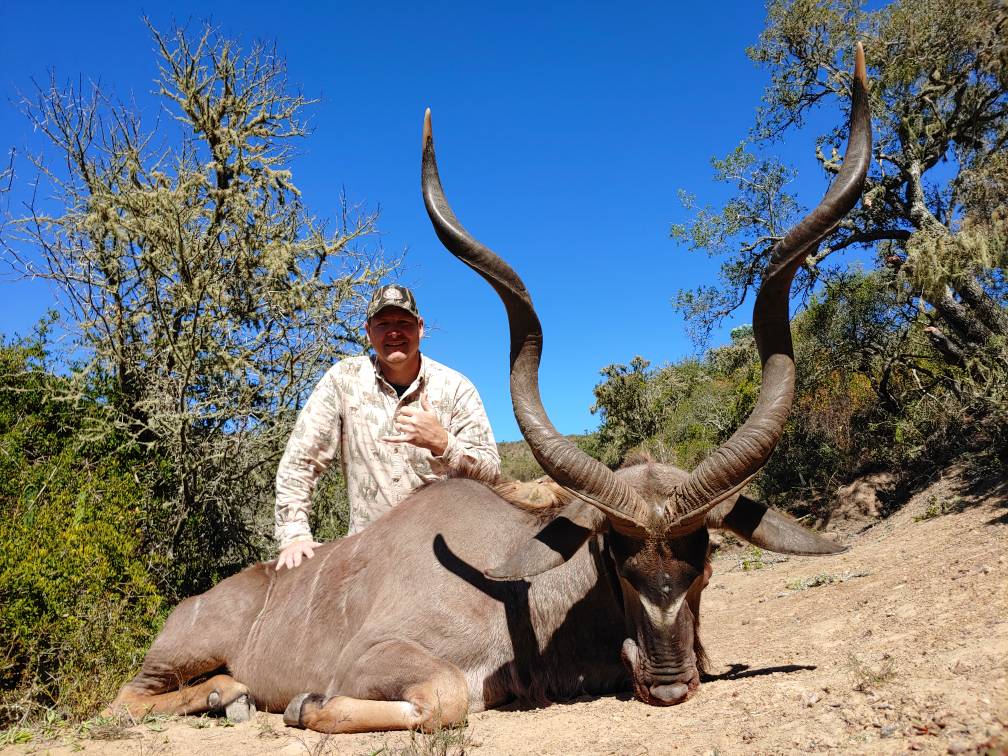 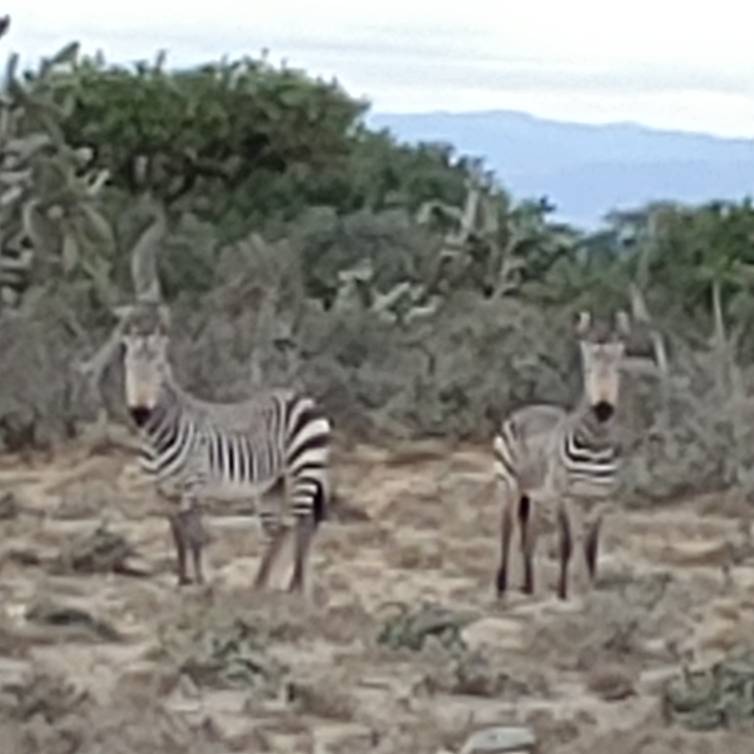 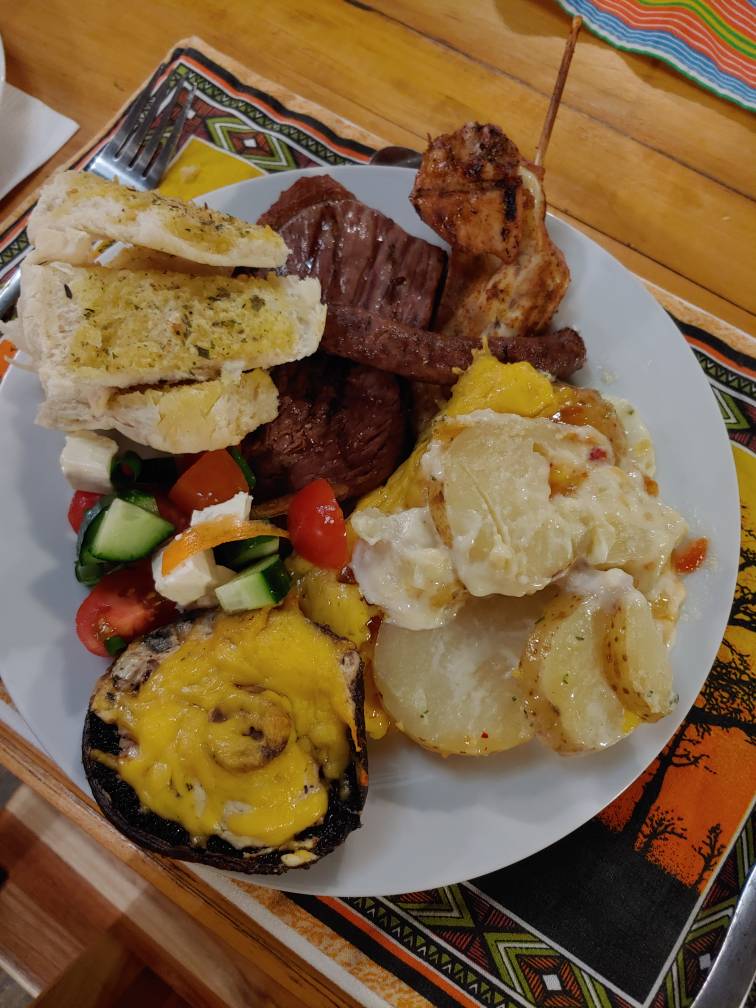 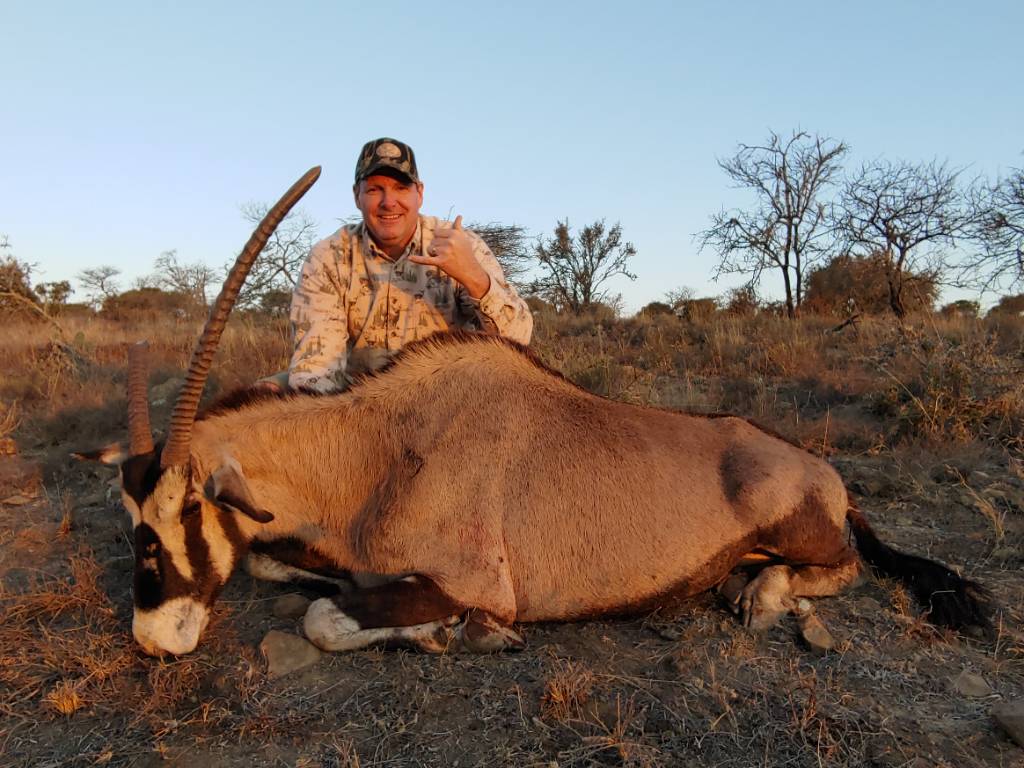 It should be noted, Marius gave me a "management bull" discount on my Gemsbuck. I didn't ask for it as I chose to take that particular animal. (I just rolled the discount into his gratuity, he earned every penny of the hunting rate. In my opinion, he's under priced for what he offers.)

Awesome.
You got some nice trophies.
Thanks for your report.

Looks like a great time! Congrats and thanks for sharing!
John 3:16

Excellent adventure with some outstanding trophies! I don’t think I could keep up chasing you young guys!
Thanks for the report!
Africa on my mind.

I used the same rifle on my hunt with Marius in 2018 and wanted to take it home! He is a phenomenal PH and I had a fantastic hunt. Looks like you did too...that bushbuck and waterbuck! As Mr. Goosen would say, “Proper Chiefs”!
"I don't need to shoot farther...I need to hunt closer." - G. Sitton

He indeed likes to say "Proper Chief." With the Waterbuck, when he said "That's the Chief" and he took off... It took me a second to realize it was GO-TIME. Marius is quick on he feet and moves with purpose. If you can keep up he will put you on some amazing animals!!!

Ragman said:
I used the same rifle on my hunt with Marius in 2018 and wanted to take it home! He is a phenomenal PH and I had a fantastic hunt. Looks like you did too...that bushbuck and waterbuck! As Mr. Goosen would say, “Proper Chiefs”!
Click to expand...

Capt_Oscar said:
He indeed likes to say "Proper Chief." With the Waterbuck, when he said "That's the Chief" and he took off... It took me a second to realize it was GO-TIME. Marius is quick on he feet and moves with purpose. If you can keep up he will put you on some amazing animals!!!
Click to expand...

I think he figured out early on that I wouldn’t be able to keep up with him on the run. So he decided he’d have me walk everywhere in my socks! Lol.
"I don't need to shoot farther...I need to hunt closer." - G. Sitton

Thank you for the kind words.

Beautiful! Another satisfied client.
Tommorow is promised to no one. Go live your dreams.

Congratulations! You have great trophies. I enjoyed your writing style. Sounds like I better get into shape for my April Namibia hunt!

Thanks for you service in the Navy. I sincerely appreciate it.

Congrats on a very successful safari, thanks for the report

Capt_Oscar said:
It should be noted, Marius gave me a "management bull" discount on my Gemsbuck. I didn't ask for it as I chose to take that particular animal. (I just rolled the discount into his gratuity, he earned every penny of the hunting rate. In my opinion, he's under priced for what he offers.)
Click to expand...

@KMG Hunting Safaris , Marius runs a world class organization .
on the ocean or in the bush.

If someone is looking to hunt SA and Marius is not on the very short list, all I can say is - big mistake!

Well done to all!

That Waterbuck made my heart skip a beat!
Last edited: Oct 18, 2019
Captain of the Luddite Society
https://www.africahunting.com/threads/zimbabwe-hunting-the-bvc-in-zimbabwe-for-buffalo-john-sharp-safaris-exceeding-expectations.53046/

Thank you for the report Jeff. Much appreciated my friend.

Well done!
You must log in or register to reply here.