Soon after I returned from a fantastic safari with KMG in 2018, a group of fellow Aussies showed interest in accompanying me back on their first African visit. So I proceeded to organise the group through my taxidermy business, and before the dust had even settled, dates were agreed upon and another long year of planning and anticipation ensued. At this stage I hadn’t even thought about what I might hunt personally, as I already had most of the common plains game species that interested me on previous trips to RSA & Namibia.

As the months rolled by, Marius threw a few ideas at me and I decided to tackle the mountain species – Vaal Rhebuck, Mountain Reedbuck and Barbary Sheep. The latter in particular was a species I’d always wanted to hunt, so permits were sorted and we locked it in. Marius told me to get on the treadmill, but of course, with a heavy work schedule, I barely did…

The rifle I chose for this trip was the one I’d used on Tahr the prior October. My mountain rig, a Tikka T3 Superlite 7mm Rem Mag, in a B&C Medallist stock and scoped with a Z3 4-12x50 BT in Talley lightweight mounts. I’m not particularly attached to it, but as a tool it simply works; it’s lightweight and accurate. I’m shooting locally made Atomic 29 135gn CNC copper bullets, travelling at 3160fps. They’d worked well in all my testing thus far so was confident they’d do the job in the African mountains as well. 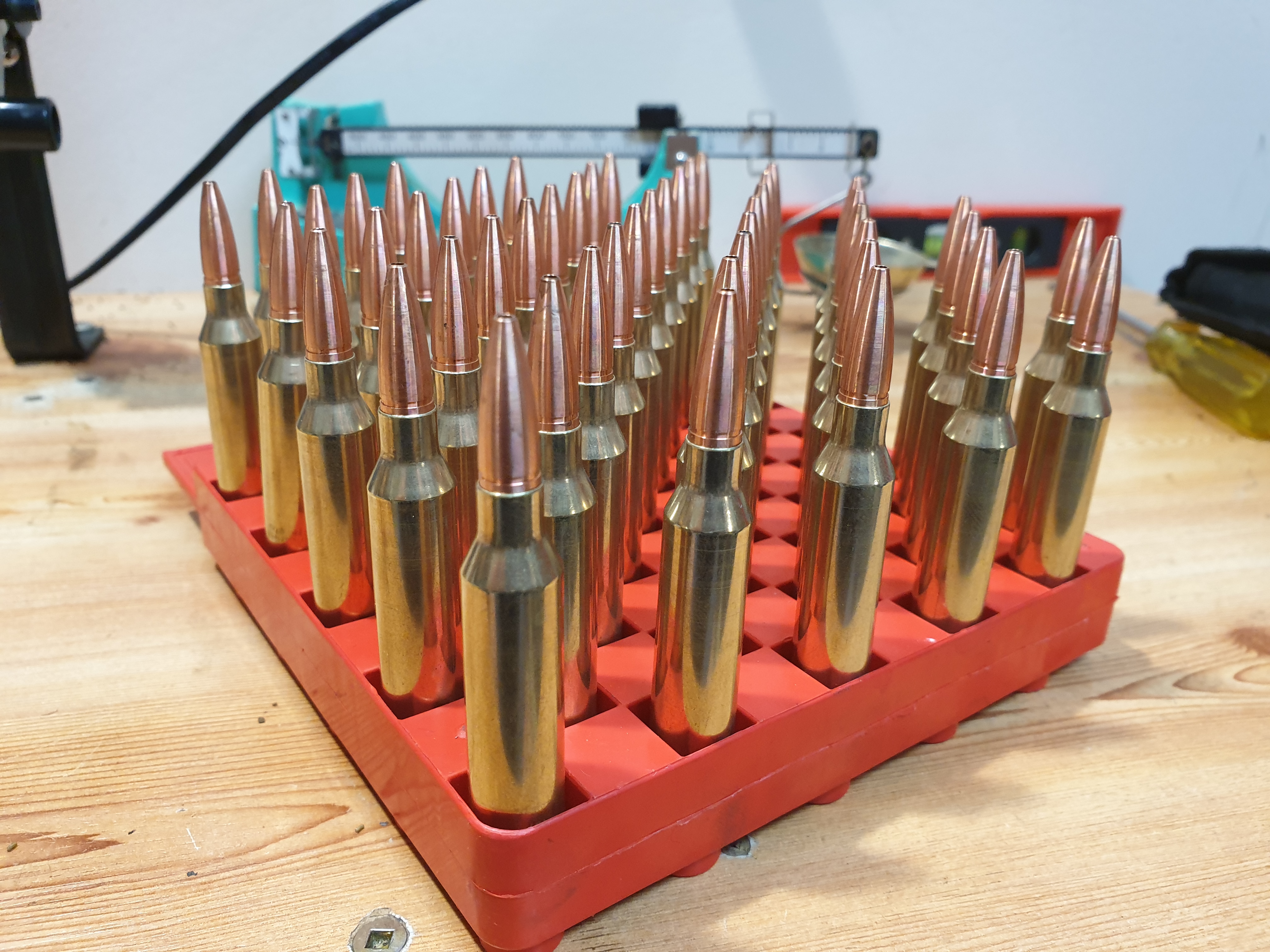 South Australia is a long way from anywhere, and Africa is no different. The condensed version is this:

-5 hour drive to the airport

-Fly Jetstar to Sydney & overnight there. Meet the group and head out for dinner and drinks. Find out our Qantas flight to Joburg the next morning is delayed by 6 hours! I contacted Adele at Hunters Permits and notified her of our late arrival, she also notified our accommodation which was great.

-After a lazy morning in Sydney we finally boarded QF64 for the gruelling 14 hour haul to Johannesburg. Airport and permits provided minimal hassles and we finally settled into Nkanga Lodge around midnight, excited to finally have boots in African soil.

-The next morning saw a short SAA flight down to East London found the familiar face of Marius Goosen, along with PH Karl and Lodge owner Andrew waiting for us, and we were off to camp! 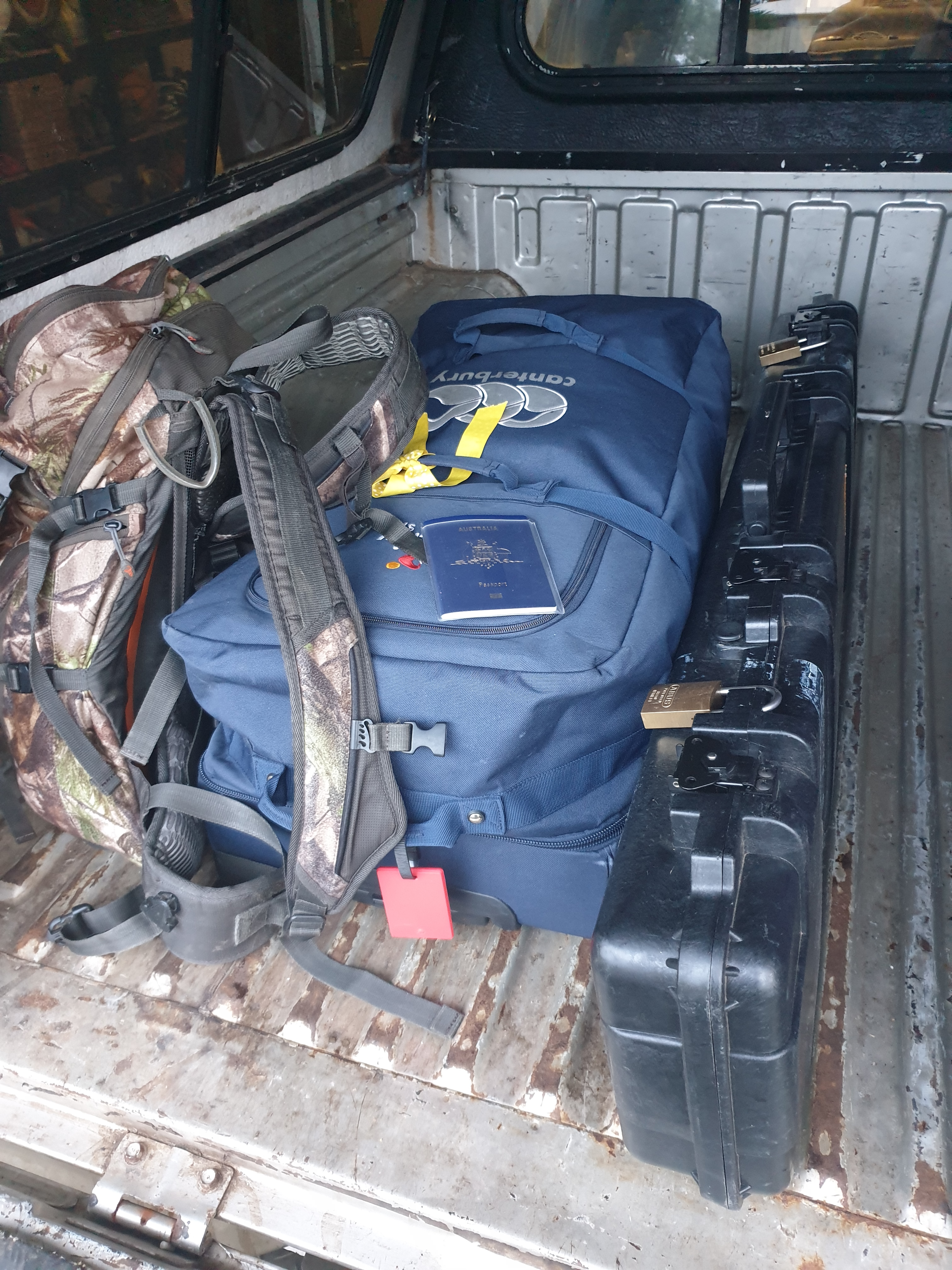 After being allocated rooms, we headed off to the range to check our rifles. Happily my 7mm still printed a decent group 2” high at 100m. That night we all settled into camp, 5 Aussie hunters, 5 PH’s, and lodge staff making for a vibrant atmosphere and over a few drinks and some Nyala fillet, I soaked up the familiar anticipation of the first night on safari; added to by a bunch of first-timers. With the group settled in, wish-lists discussed and plans made, we had an early night; as at 4:30am the next morning Marius and I would be heading 2.5 hours north to base ourselves high in the Stormberg Mountains for the first few days..... 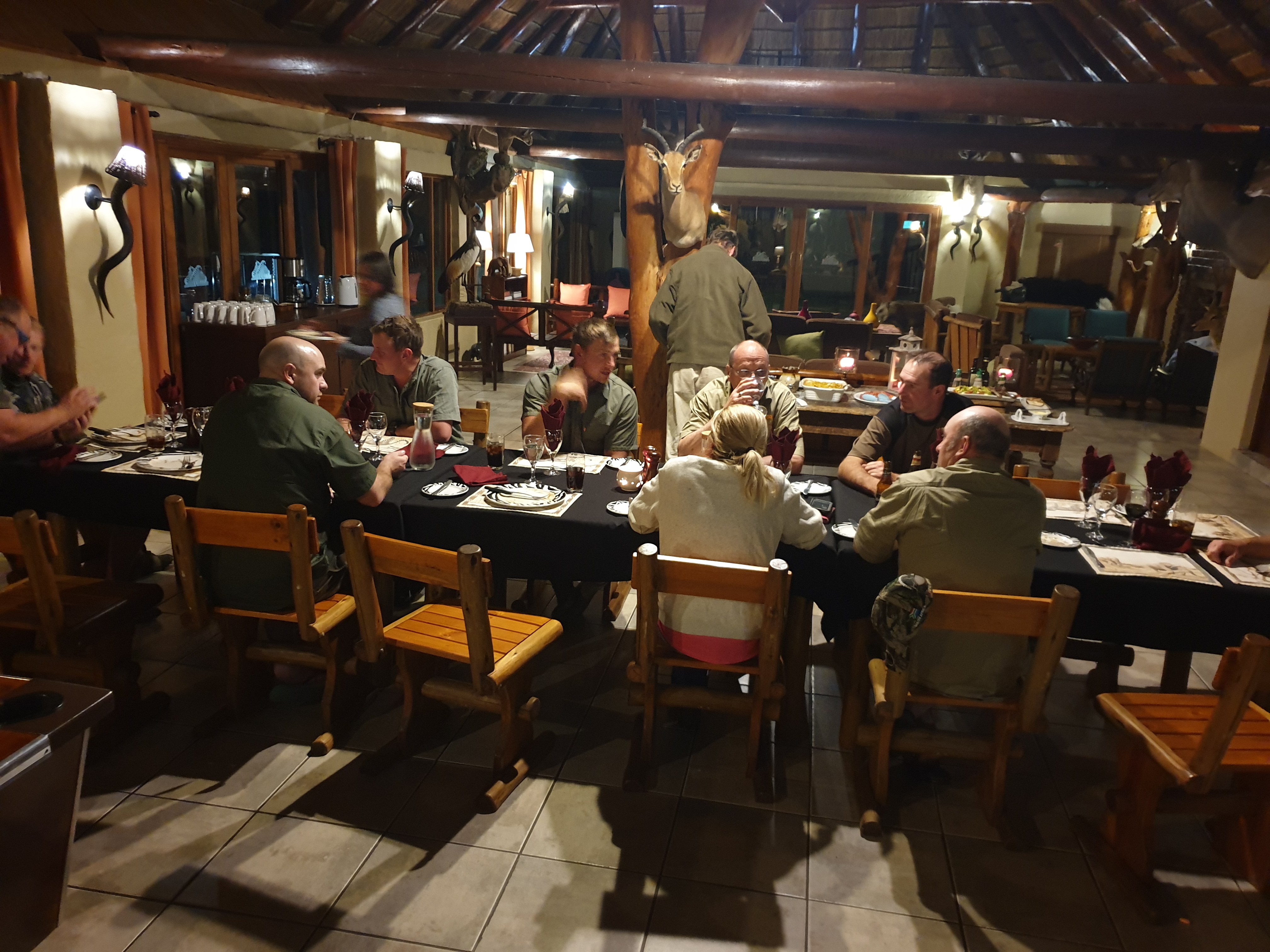 Marius and Kim are wonderful hosts, and run a first class operation!

Arriving at the huge highland concession just after first light, we dropped our gear in our cozy rooms and headed straight out for a look. Vaal Rhebuck were our #1 target, and Marius had prepared me well for just how challenging they can be, and how amazing their eyesight is. As I saw Marius pulling on long pants, face veil and gloves, I knew he was not joking. I dressed likewise. Plenty of blesbok scattered as we crossed the high plains and headed deeper into the mountains. With camp at around 5000 feet and the areas we were hunting around 6000 feet ASL, this was similar elevations as my NZ tahr hunts, and I was quite surprised. Although happily, the hills were nowhere near as steep. 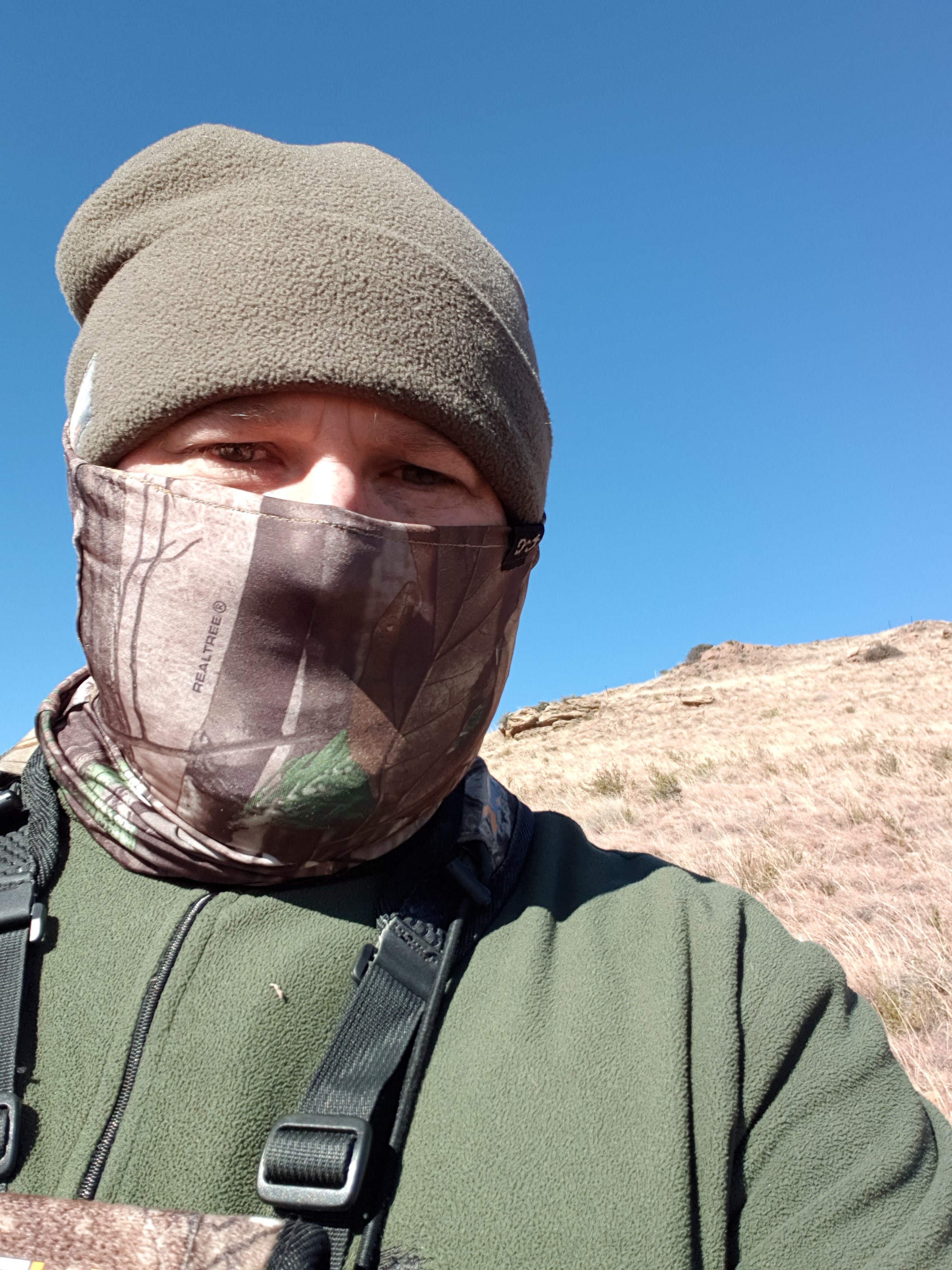 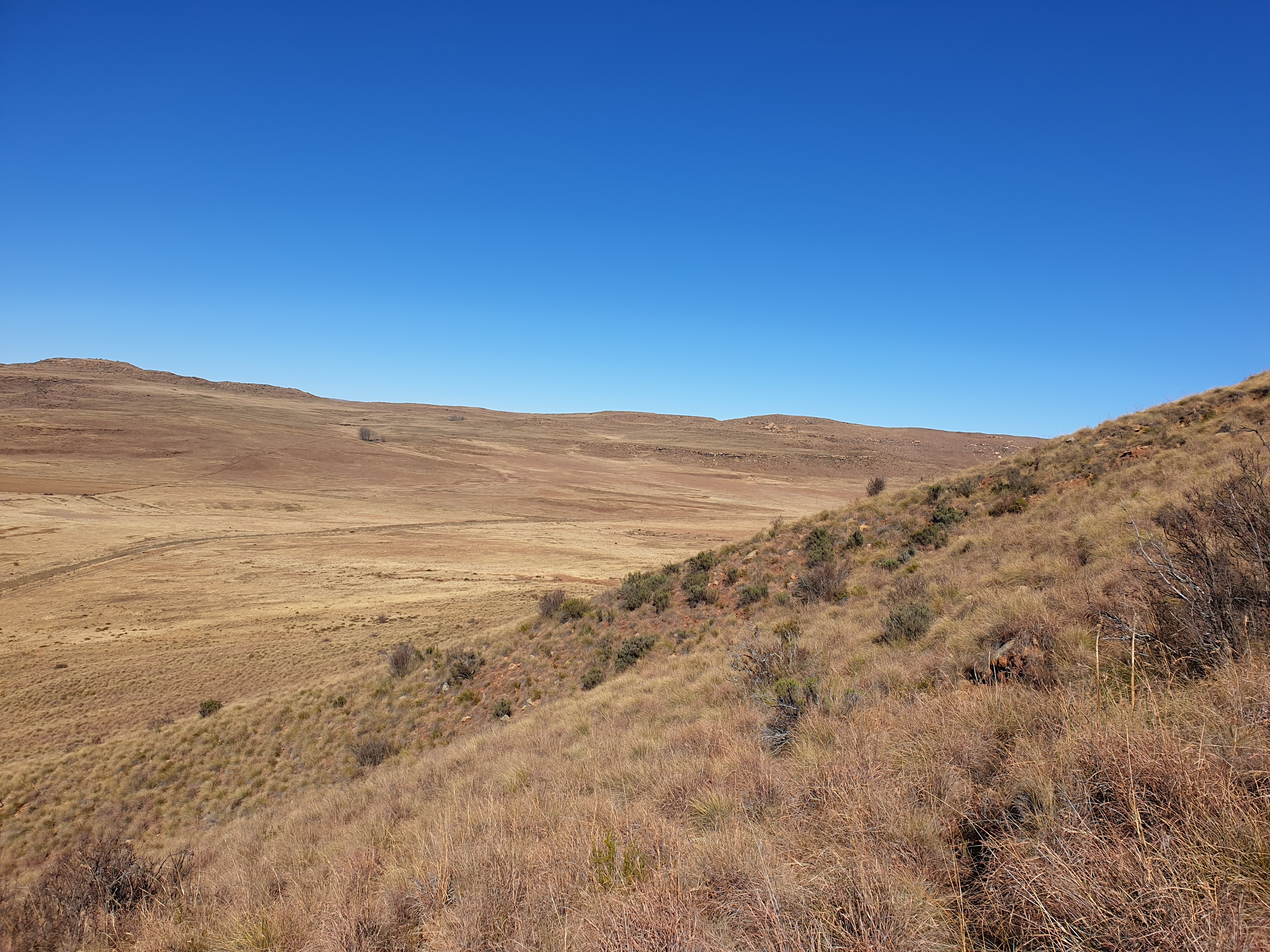 A few scattered vaalies were seen coming from water, but no rams. Marius picked up a couple of mountain reedbuck feeding on a slope, but the spotting scope revealed a young ram so we pressed on. Eventually mid-morning we glassed a mob of vaalies feeding their way from the flats back into their mountain bedding area. Circling around a few kilometres, we left the Cruiser and came in over the mountain to tackle them from above. As we neared the edge, we went from stooping, to crawling, to sliding through the rocks flat to the ground like a pair of pythons. Although the back python appeared to have recently consumed a gazelle….

Reaching the edge, we carefully glassed and the mob was still present with the ram at the rear. They were still over 500 metres away, but the way they were travelling it looked like they’d pass within our 300m range. Slowly they edged closer, until one of the keen-eyed ewes stared straight at us from 503 metres, peeking from behind a rock on top of the mountain. “We are busted!”, Marius whispers. “Bullshit!” I reply. But busted we were, and I got schooled in just how good these little antelope are. 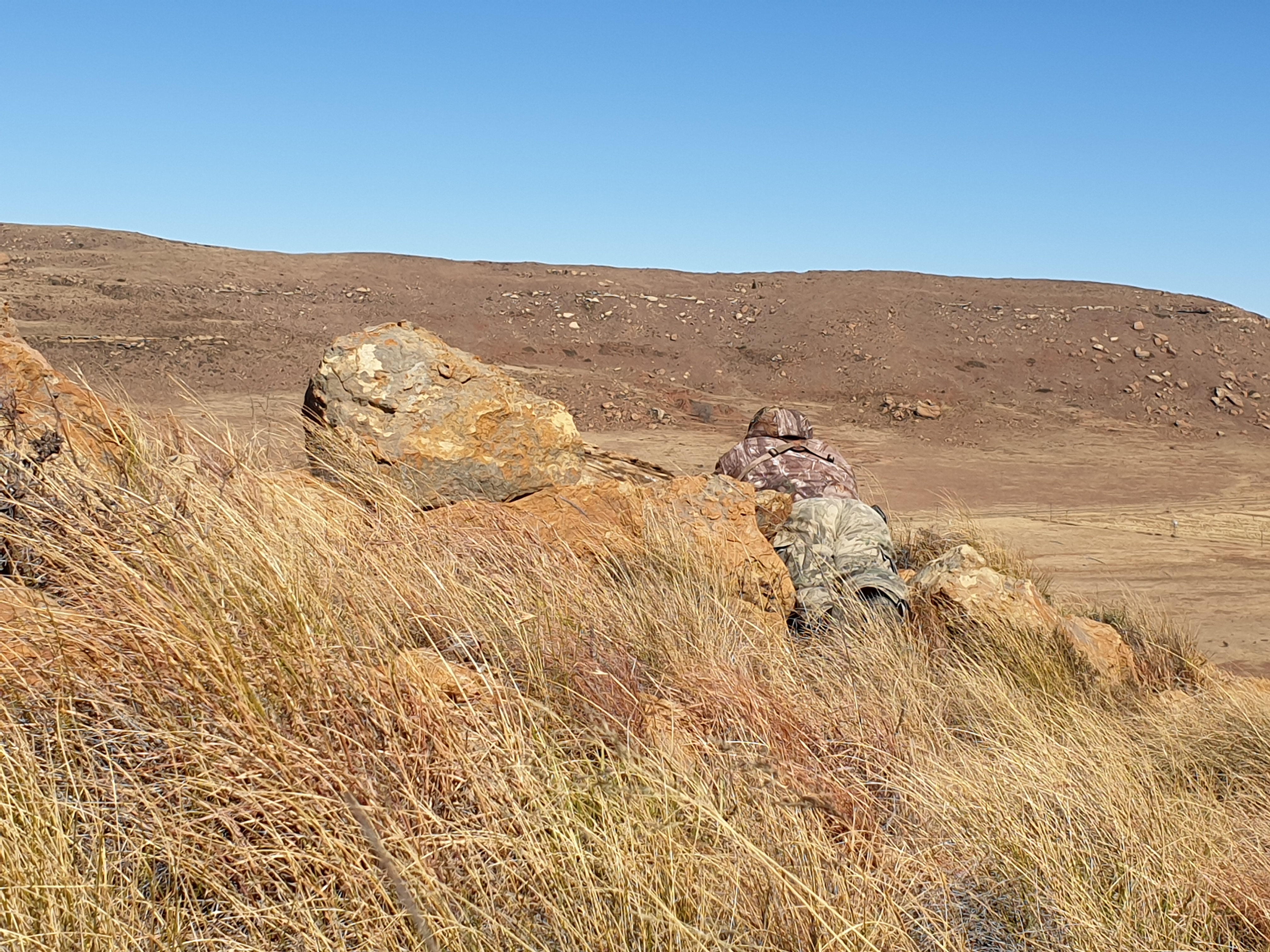 They headed out across the plain toward another mountain to our left. We backed out, and repeated the whole exercise, going around and over the next mountain. This time, we found ourselves perched in some rocks looking down on the mob at 300m. I slowly moved the rifle into position, fully camouflaged and not wanting to attract attention. They slowly fed into 280 metres. I looked at the crosshair at 12x on the tiny target below. Marius watched the lead ewe who was still moving and knew the ram would follow eventually, so we waited. Finally he stood broadside at 250 metres. This was it. I steadied my aim and squeezed, the shot felt good and the ram dropped, hit hard. But as quickly as he dropped, he found his feet again, running 200m across the plain before dropping again.

Marius and I worked our way down the hill and across the plain via a large washout. Circling around, we came within 150m, and off the sticks I put in a good finisher and my trophy was secure. My first shot had hit the point of the shoulder but I hadn’t allowed enough for the downward angle, so the bullet missed the bottom of the heart and smashed the offside leg on the way out. He was never going far though.

Now ground shrinkage is not uncommon but the opposite is a lovely feeling, and that’s exactly what happened here. Marius knew he was a good mature ram with heavy bases, I’d had a good look at him and thought he was very good compared to pictures I’d studied. But in reality he was better than we’d both anticipated; old with worn teeth and tattered ears. Neither of us hunt for the tape measure (in fact in the 11 trophies I’d hunted with KMG, this was the first we have laid a tape on) but at the end of the week we were impressed when he came in just shy of 9”. A trophy to be proud of, a fantastic mountain hunt, and in the salt just before lunch on day 1. What a start! 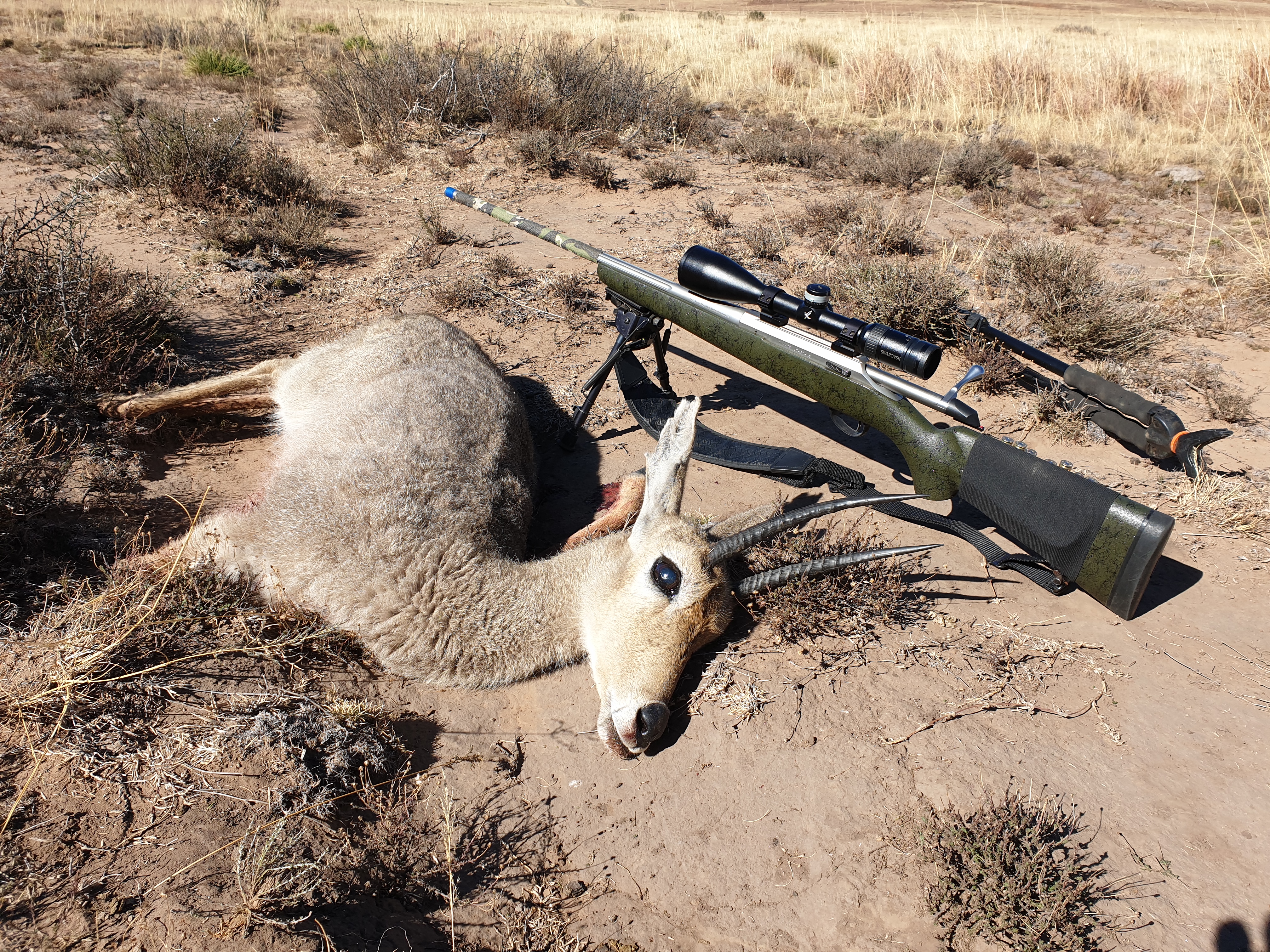 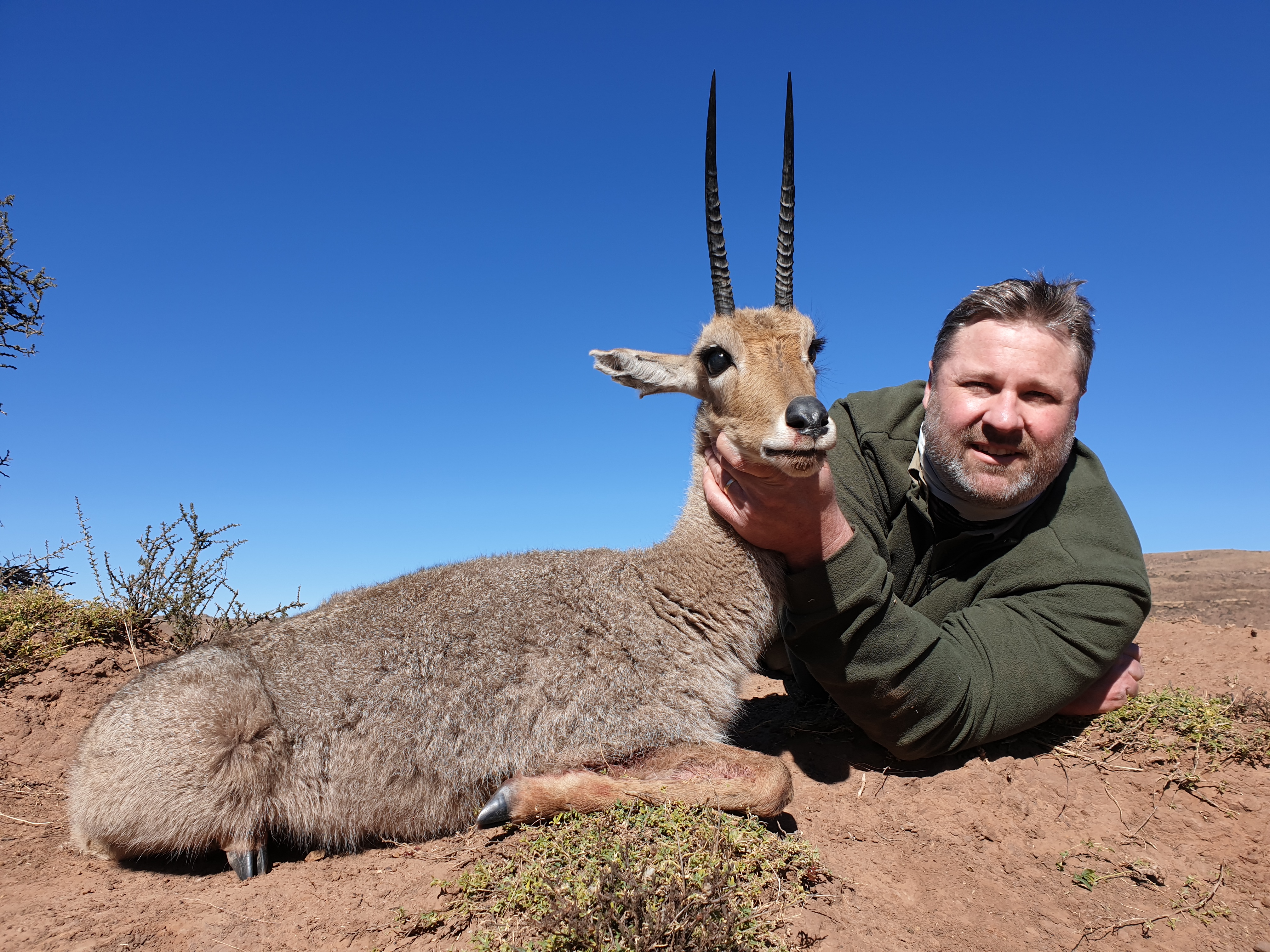 Enjoying the report thus far! Thanks for the photos of other details, keep it coming!

Enjoying the start! Congrats on a nice vallie!
John 3:16

My Vaalie cleaned up on the hook...to become a shoulder mount. I found their fur to be just like a kangaroo. 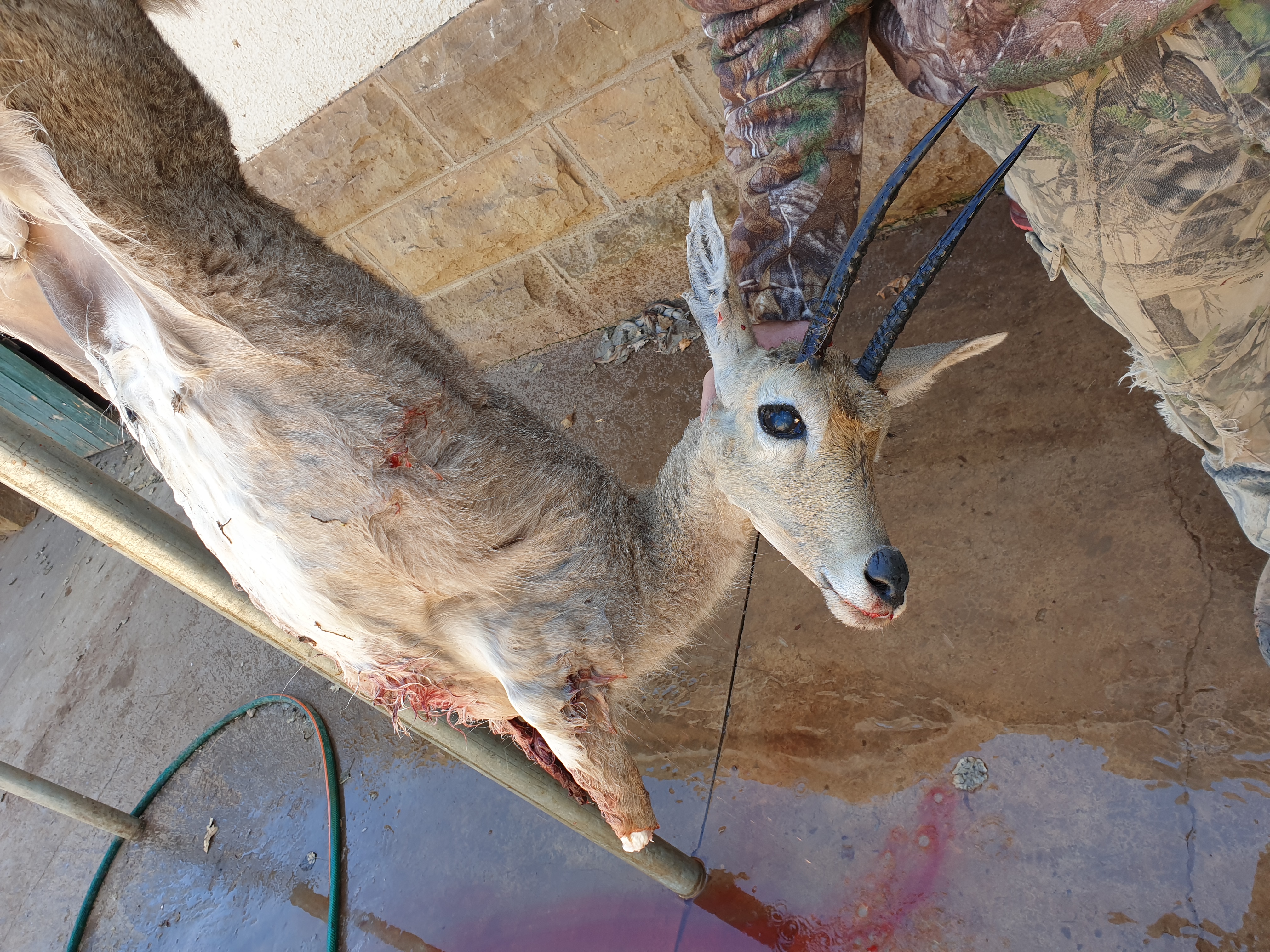 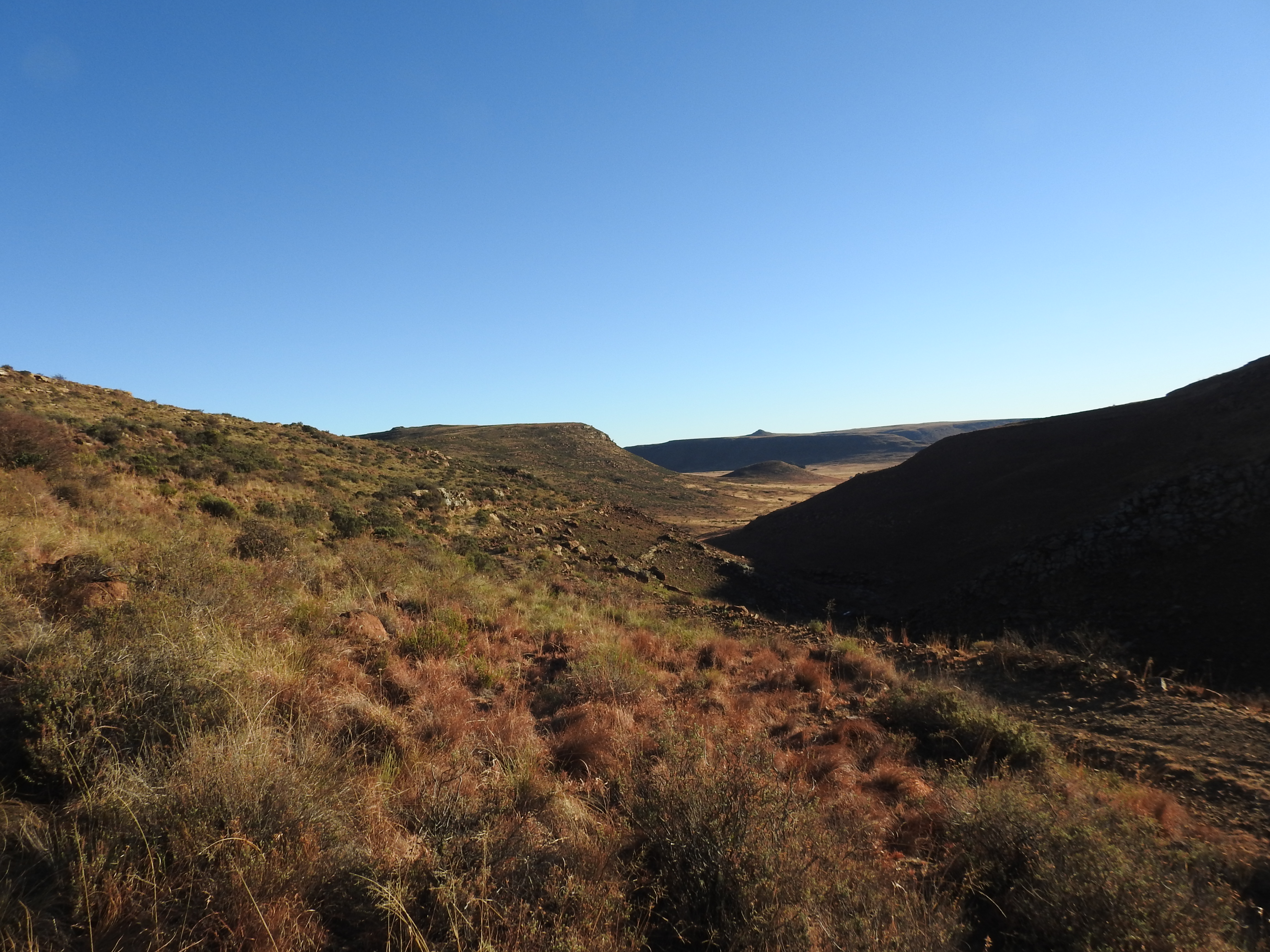 Another view of my Vaalie. Shot from the mountain behind, the red washout is the one we walked down. Excuse the 'beanie hair' 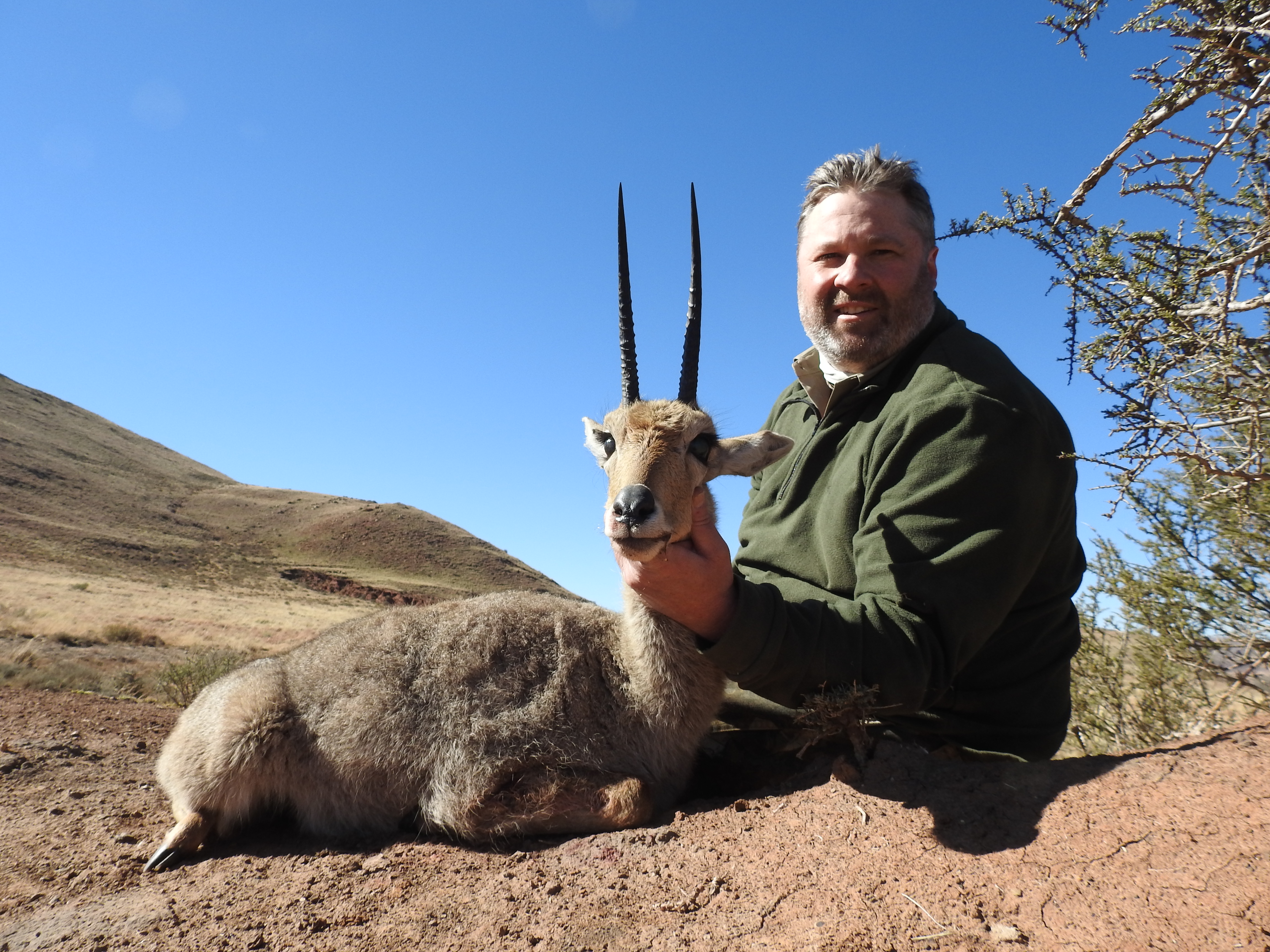 With lunch sorted and Lloyd having dealt with the cape on the vaalie, we headed out again to a different area on the large free-range concession to look for mountain reedbuck. Plenty of black wildebeest and hundreds of springbok covered the plains, with zero cover they’d make for a challenging hunt!

With the afternoon wearing on, Marius spied a group of reedbuck half way up a bluff, with a promising ram at the rear. Bailing out with the rifle, radio and sticks, we left the trackers to take the vehicle around the bottom and watch through the spotter, and up the slope we went at a rapid pace, half way between a fast walk and slow jog. With me puffing and panting along, Marius reminded me that he’d told me to get on the stepper. I replied that I had, it was just the thin air playing havoc with me. He didn’t believe me. And he was right not to 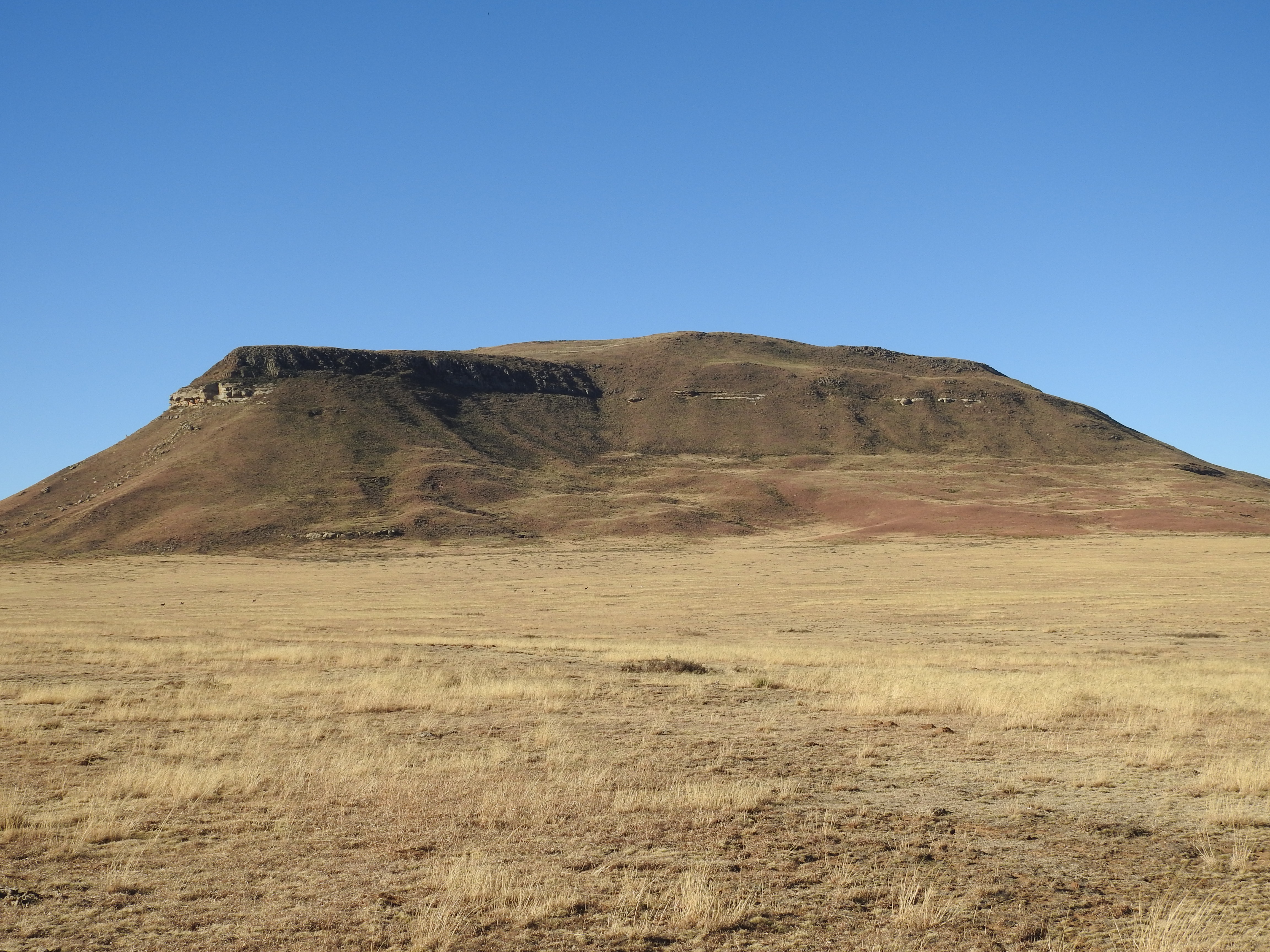 Pinned down behind some rocks, we could clearly see 3 females within 300m, standing statue-still and starting in our direction. But the ram was nowhere to be seen. Asking the trackers, the radio crackled back that they could not see him either, but there were more females hidden from view in the kloof before us. The ram had to be with them, we figured. We now had a ‘discussion’ on whether to go up or down…..Marius won so up the mountain we went. Three-quarters of the way up, Lloyd radioed that he thinks we should come down and approach from a different angle below. At this stage I suspected that my dear wife had paid Marius extra to give me some exercise.

So we dropped right down to the flat and circled in from below. Eventually we found the ram and kept picking our way uphill, the setting sun now at our backs and working in our favour to block the animal’s vision. Just as we approached the mob spooked and ran uphill to our right. We followed, and they eventually paused on the edge of a bluff. The sticks went down, and with my heart racing, I followed the ram until he paused at 220 metres. I rushed the shot and hit him too far back but he went down. Annoyed at myself, we rushed uphill and put a good finisher through his shoulder. A very nice ram and a physically challenging hunt, with photos quickly taken just as light ran out. 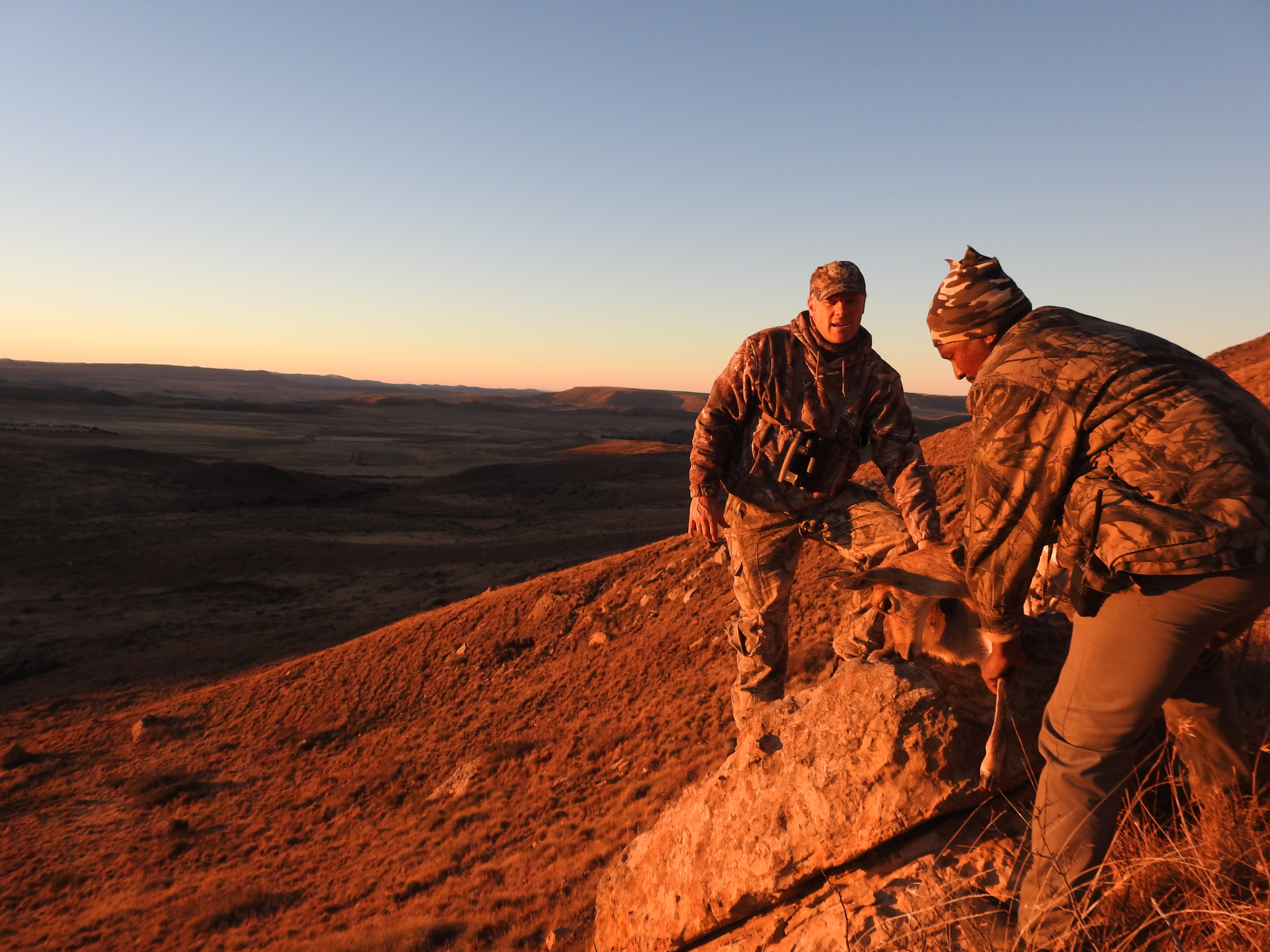 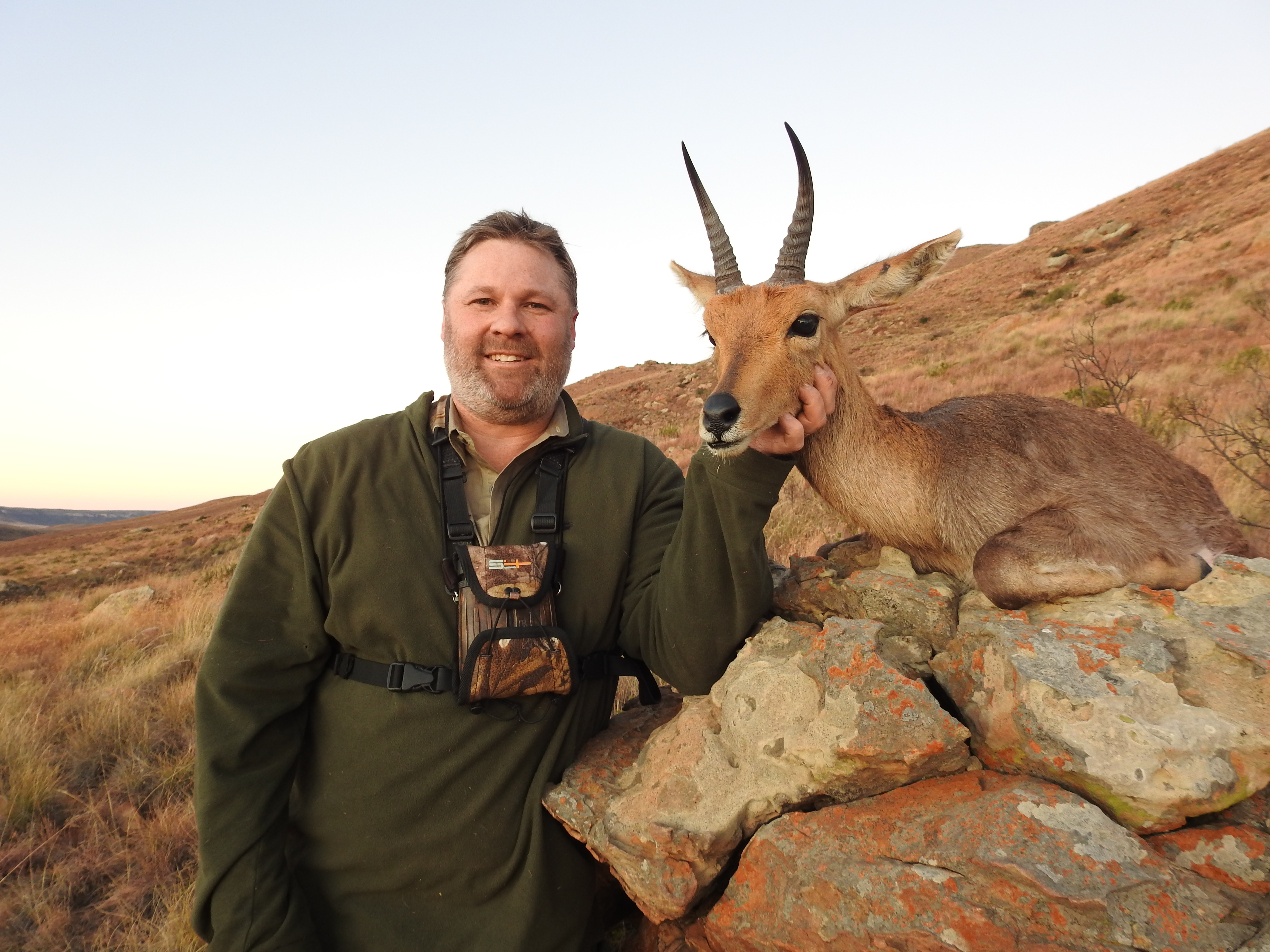 As we raced downhill I slipped and landed on my scope. Happily, a confirmation shot at a bottle on a post showed my zero was not affected.

It had been a fantastic day, with the mountain double I’d come 12,000km for, achieved on Day 1. And a pair of beautiful trophies they were.

That’s a really great first day-excited for more about your hunt and how your friends did as well-thanks for posting!

Nice trophies.
Glad you did not break your neck, never mind the rifle.

Fantastic Vaalie! Love the mountain reedbuck as well.
Y'all can go to hell, I'm going to Texas! Davy Crockett

Excellent! Nice looking country that you are hunting.

Great story Blacks. Its going to be tough to beat day 1.
T

Thanks for writing your report. I am looking forward to the rest of it! Well written, and funny too.

What a day! Very cool!

Thanks one and all!

I'll get on with it soon!
You must log in or register to reply here.

SOUTH AFRICA: KMG Hunting Safaris.....Come For The Hunting, Stay For The Milkshakes!
2