You’ve heard the expression “you can’t get enough of a good thing.” Well I am pretty sure that describes my relationship with KMG and hunting with Marius, as this is my sixth trip to RSA to hunt with KMG. Two years ago I went over to do one of Marius’s famous Cape Buffalo hunts. We decided on short notice that we would give a Spotted Hyena a go, and the permits were duly applied for. We had a great hunt and were successful on our Buff, but due to a drought up in the Timbavati at the time and a preponderance of carrion around for the Hyenas there was no action at all on our baits. We had one set of tracks passing by the bait, but we had other business to attend to down in the Eastern Cape, and did not warrant the activity worth it to stay the extra days, so duly carried on with our hunt down from their main base camp.


I made up my mind that I would be back to give it another go and due to the fact that we had already planned a Lioness hunt in 2017, we returned in 2018.


Marius was waiting for me in Johannesburg and we quickly set out on the drive to the hunting area, once again soaking in the spectacular scenery while passing through the Drakensberg mountains. We settled in upon arrival at camp and dinner was spent conversing about the hyena activity in the area as well as catching up on the last two years and of course hunting stories.


The morning found us checking two different bait sites where we quickly discovered that both sites were being hit by multiple hyenas. Marius quickly evaluated both sites and once we decided where we would sit first as we set about to the task of building a blind. The construction of which was similar to a whitetail blind as we utilised a pop up and proceeded to heavily brush it in. 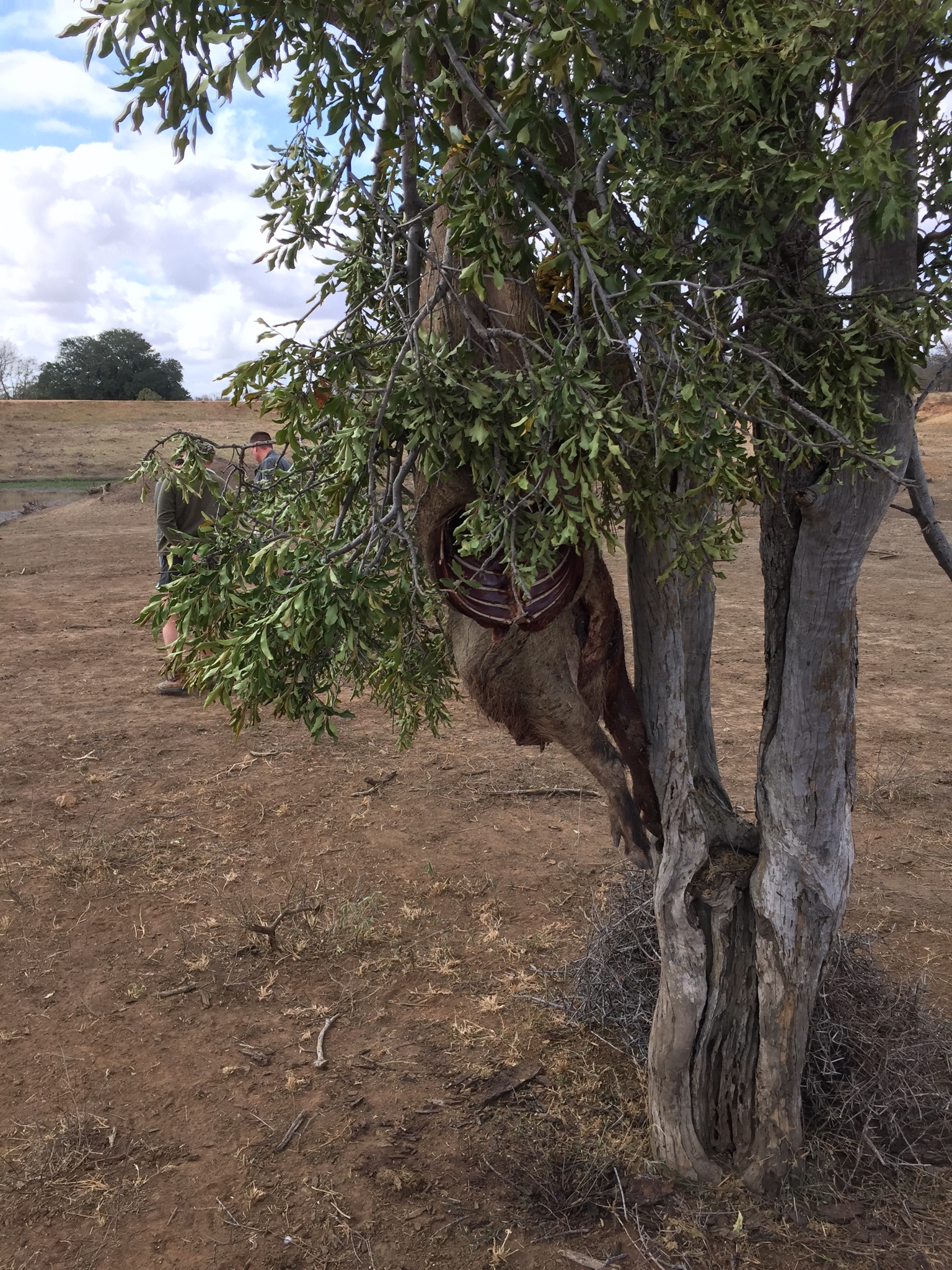 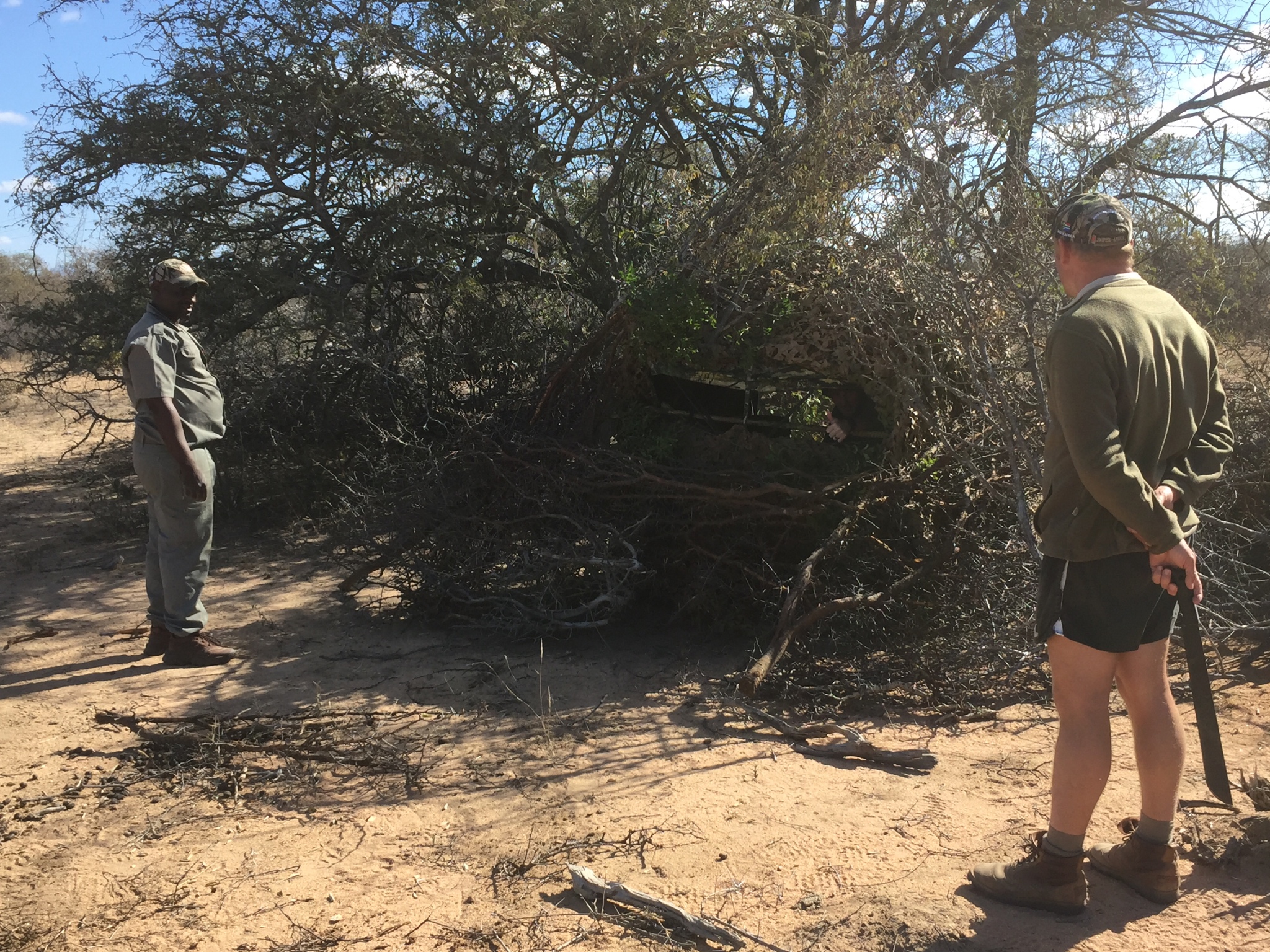 A quick trip was made to the range to make sure the .300 Win Mag was bang on and we returned to the lodge for a short rest as we steeled ourselves for the potentially long sit we would face this evening. We were in the blind before dark and settled in quickly. As the darkness closed in, I realized that this was the first time I would be hunting in the dark as it not something we normally do back home in Canada. A leopard started sawing right after dark somewhere close by and added to the excitement of the hunt. Marius spotted a lone Hyena early into the hunt with the FLIR, but he gave us a wide berth and circled us completely out of range. A couple hours later he reappeared and came at us directly towards the bait and quickly closed the distance. The torch was about to be snapped on when this wary lone hyena abruptly made a turn and walked what we thought, out of our lives. He was picked up again, this time around 8 paces, staring at the blind. While circling, he must have picked up some scent, and came closer for inspection. He was a big dog, and the tracks leading to the bait from previous nights, showed us that this individual was the same Hyena walking on the road, from the same direction, every night. By the size of his tracks, he was a monster. He did not grow this old by exposing himself regularly.

We evaluated the situation and felt since he got so close to the blind, he might have gotten startled. Chances of his return this night, was slim, or so we thought, and duly decided to pull out around midnight.

We were treated to close encounters with a Civet, Honey Badger and the seemingly ever present sawing of leopard.

The next morning, we set out to check the baits, and to our surprise, found our bait to have been hit. By the look of the multiple tracks, there was more than a single individual. The lone Hyena could have been back, or it could be the group that we had had hit the bait in the preceding nights to arrival as the tracks were all mixed in. The next night, we would sit through.


The second night saw us back in the blind before dusk and around 19:30; the lone and very wary hyena was spotted but kept his distance from the bait. He disappeared into the bushline. We were however treated to a massive Leopard tom that came in to investigate the bait and oh how I wished you could hunt Leopard in South Africa at that very moment!

Upon the return of the lone Hyena around 22:30, and keeping its distance on the bush line, a big Civet made its way to the bait and decided to hang around for a while. There was no doubt that the lone Hyena was not comfortable with the Civet there, which might seem strange for a Hyena, but upon speaking with the PH’s involved, it was more a case of a lone Hyena being much more cautious, also never whooping, giving away it position to a another clan, which would probably end with a beating, and ultimately a painful death. While watching the Civet, we could see the Hyena keeping his distance, trying to figure out whether it was safe to close the distance to the bait.

Around 04:30 Marius picked him up again as he circled, this time coming in from the right. I was given instruction to get ready, also where to aim and a general direction where the light will be switched on in order to illuminate the Hyena. He was on his way to the bait, stopping every 10 paces and evaluating the situation, which gave me time to get ready and steady myself. The bait tree was silhouetted on the skyline, so it was pretty easy to have a point of references of where the light would hit. The communication came through that I should ready myself two yards to the left of the bait tree. The light went on, and as fast as I could acquire the Hyena in the scope, he took off at a gallop, never giving us a chance at a shot. We had previously discussed that it was impossible to predict how the Hyena would react. Sometimes they stop as soon as the light falls on them, other times they scatter. This was the latter case. We were shattered. We had put in our time, and everything fell into place. Everyone had done their bit, from the baiting, to building the blind and to no one’s fault, the chips fell for the house.

It still was not over, as it was only the second night, but as Marius said, we had to adapt. If we wanted to connect on the Hyena, we would need to outsmart it.


Day three saw us shooting an impala for bait as well as conducting a drag just prior to reentering the blind. 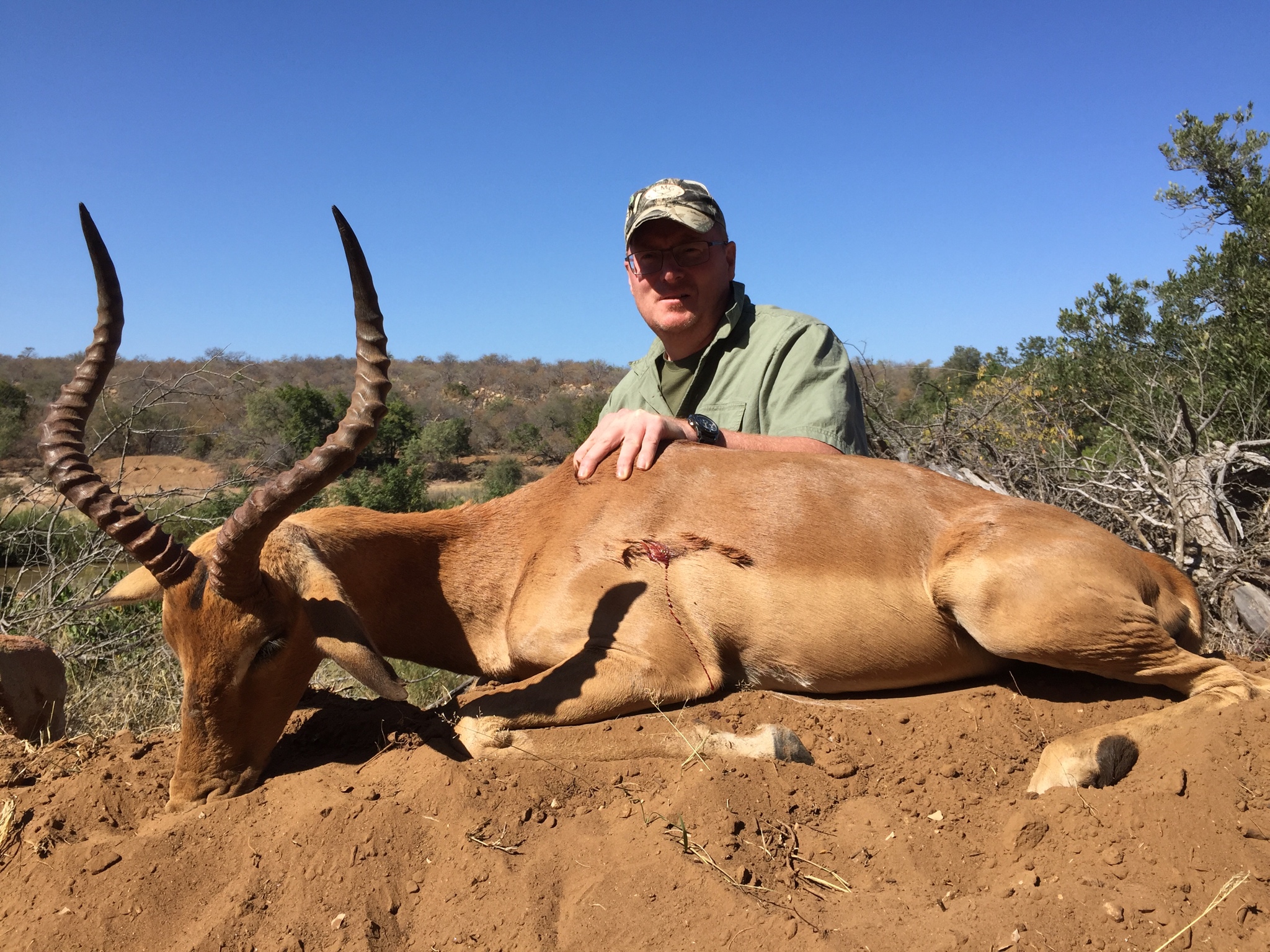 We entered the blind just before dark. This time, we adapted and changed our approach. The details which I have been told, are house secrets, and also asked not to divulge. I fully understand the reason for the request, and respect that. There is a reason why these guys deliver the results that they do, year in and year out. They have many years of experience and done the hard yards on what works and what doesn’t. To simply divulge their hard work over the many years they have been doing this for others to hitch a free ride, would simply not be right.

Soon after dark the lone hyena appeared again but once again kept his distance. A couple of hours passed and suddenly we heard Hyenas yipping to our right and quite quickly a pair appeared from our right heading towards the bait. Marius had discussed with me that we wouldn’t wait for the Hyenas to arrive at the bait and shoot at the earliest opportunity as sometimes they will continue right by the bait without stopping. I caught my first glimpse of a hyena and settled in, only to have it lope out of my sight and I quickly picked up what I thought to be the same hyena (which turned out to be a different one) and touched off a round. I wasn’t sure if I had hit the hyena but felt quite sure that I had, however I was now looking at the second one through the scope. We decided to play it safe. I lowered the rifle and Marius stepped out of the blind for a look and returned with a huge smile and said “you got him.” 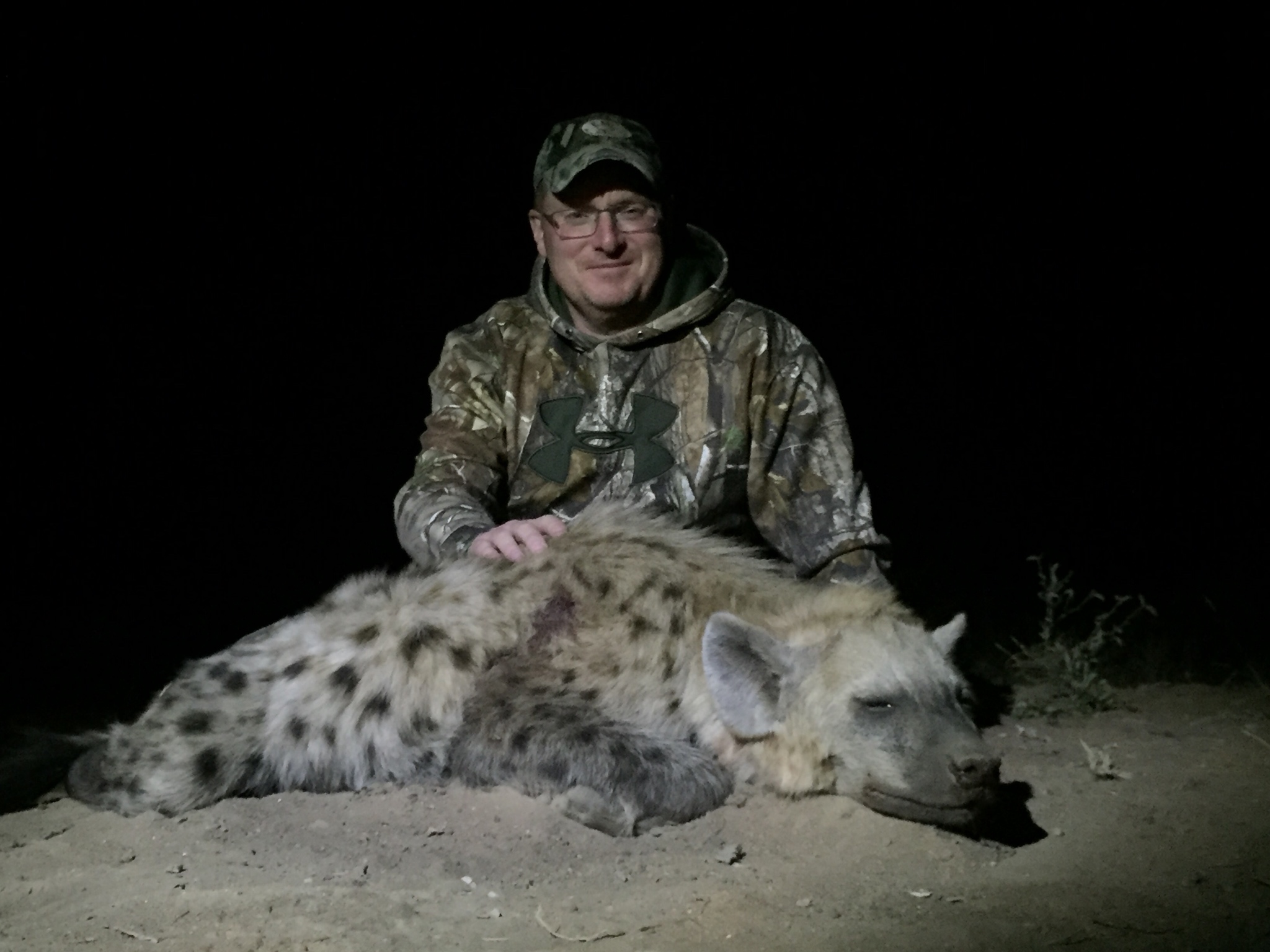 If you haven’t tried night or Hyena hunting you really ought to give it a go, as the sounds you hear at night, are quite incredible!


We said our goodbyes the next day and prepared for the drive back to Johannesburg and flight to Port Elizabeth in the East Cape, where little did I know my night hunting in South Africa was going to continue.
Last edited: Aug 26, 2018

Congratulations! Someday I’d love to have a go at that!

Congratulations Rod. Well done.
Tommorow is promised to no one. Go live your dreams.

Congrats on the hyena!! Look forward to more!
John 3:16

Yeah, was trying to decide about posting the porcupine story and finally came to the conclusion if i don't Marius will!

Hyena hunting @ night is the bomb! I’ll probably try to whack another one next month in Zim.

Very cool. Congratulations!
"When my friends tell me that I have led a remarkable life, I have to admit having done my best to make it so" - John Kingsley-Heath

Edge said:
Hyena hunting @ night is the bomb! I’ll probably try to whack another one next month in Zim.

Congrats, I´m still trying to get mine, so far no luck !

Did Marius let you were shoes in the blind or did he hold tight on the no shoes.

James Sexton said:
Did Marius let you were shoes in the blind or did he hold tight on the no shoes.

I am so use to it by now, I usually just leave my boots in the truck!

AWESOME hunt! I’ve night hunted for 65 years. I love it! Your senses are all working overtime with all the different sounds going on. What a fun report! I must add hyena to my bucket list!
Thanks for the insights!
Africa on my mind.

Hey Rod congrats on the hyena, would like to do the same hunt myself one day, with Marius of course.

Waiting patiently (not) for an update!
"I don't need to shoot farther...I need to hunt closer." - G. Sitton

I must get on that! Best part of the story!

Nicely done, Rod! Can't wait to hear the rest of the tale.

Awesome hyena and that impala is very heavy horned !
Bowhunter addict
You must log in or register to reply here.