Blacks has begun his report of our trip, and a good one so far, and much more detailed than my version will be. I just arrived home today from our latest African adventure and what an adventure it was.
My wife, Lauren, and I along with blacks and his family originally booked a 7 day hunt with Marius with my target species being nyala and bushbuck. These two animals were the main reason for booking the Eastern Cape with KMG in the first place. The trip was booked 18 months out and in the intervening period we had decided to add a few more nights to our trip which would allow a day fishing charter in there somewhere. Whilst Lauren is not a hunter (or wasn't until further in the report) we are both keen fisher people.
Now with extra days there was a decision to be made as there was obviously going to be time available with my list only including 2 animals. There had been plenty of banter and discussion via messenger with Marius and during a conversation one night Marius mentioned that a while hippo tags were very few and far between in the Eastern Cape, would I be interested in hunting one. It was decided that Marius would keep me informed of what permits would be available when and if they were issued.
Finally one evening he commented that 10 tags had been issued and would I be interested. I was definitely interested but this would all of a sudden more than double the cost of the hunt to which I replied that could I please have a week to think about it. Within days Marius had contacted me saying that the tags were filling, so I replied to put my name on one. Now all that was left to do was get there on the 1st July which involved 4 flights and 3 days of travel to get to Mpunzi Lodge, the home of KMG Safaris.

My rifles for this trip were my Winchester Model 70 in 416RM for the hippo hunt and Kimber Select Classic in 300WM for the rest and to share with blacks. Both rifles were using my handloads consisting of Aussie made Woodleigh 180gr PP in the 300WM and 400gr Woodleigh Hydro's in the 416RM.

First 2 days we all hunted together and I managed this beautiful nyala bull late on the first day. Taken at about 25m in thick bush with the 300WM. 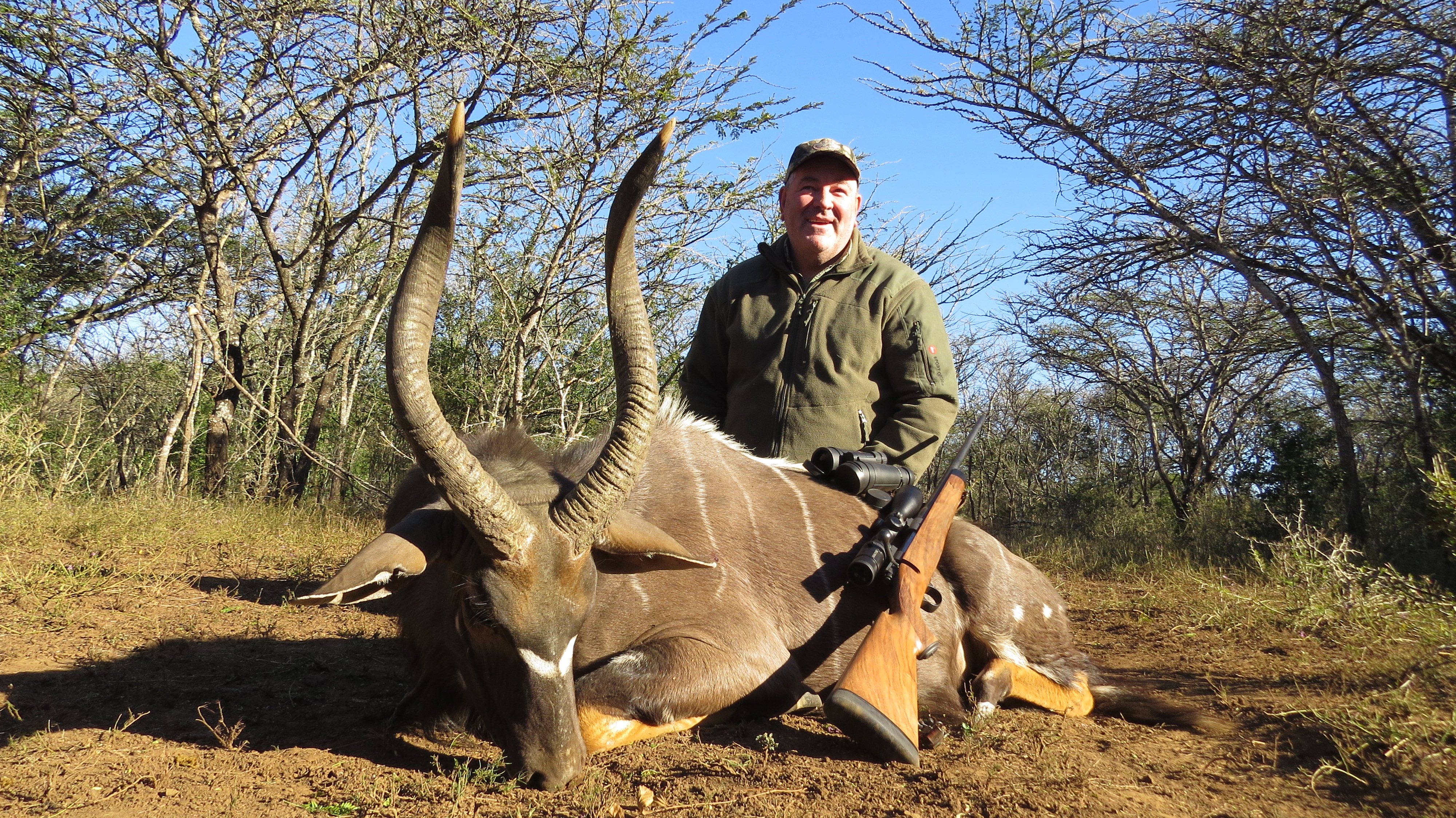 We overnighted with some great hosts in their home and were up early the next day searching the beef and dairy farm for the wiley bushbuck. Searching the scattered bush, creek lines and sown crops for rams was an amazing experience. Getting to learn where these antelopes call home was fun. After hearing of blacks success we all met back at the main buildings where we witnessed blacks fabulous ram getting caped for a shoulder mount. It was decided we would all head down to a paddock that had pasture sown beside the creek line bush and while eating lunch we could check over the bush edge for a taker ram. We had glassed this area earlier in the morning when it was still cold and had spotted quite a few ewes and young rams but now at lunchtime the weather had warmed up and more rams were coming out of the bush to feed in the warm sunshine.
While we all sat chewing on our sandwhich lunch Martin, my PH, wandered over to the edge of the slope looking over the bush edge only to discover a shooter ram feeding out with 5 or so female and young bushbuck. He came running back to us with eyes wide open telling me to grab my rifle. We crept back to the spot where Martin had seen the ram and peeked over the edge to see him feeding peacefully in a warm and calm little pocket of pasture. The sticks were set up and I rested the Kimber comfortably into the top and sighted in on the ram at 130m distant. He was perfectly shadowed behind a young female bushbuck and when he finally moved out from behind her I settled the Swaro Z3 reticle onto his shoulder and squeezed off the shot. The ram dropped instantly the 180gr Woodleigh entered his body and it was a happy crew that went down an inspected my trophy ram with immaculate cape. In 2 days my main 2 species had been taken, and what excellent examples they both were....... While taking photo's and admiring the ram I had just been fortunate to take, Marius described the affection the local hunters have for these Eastern Cape bushbuck, the tradition and respect involved with the hunting of them. I was a very happy hunter after day 2...... 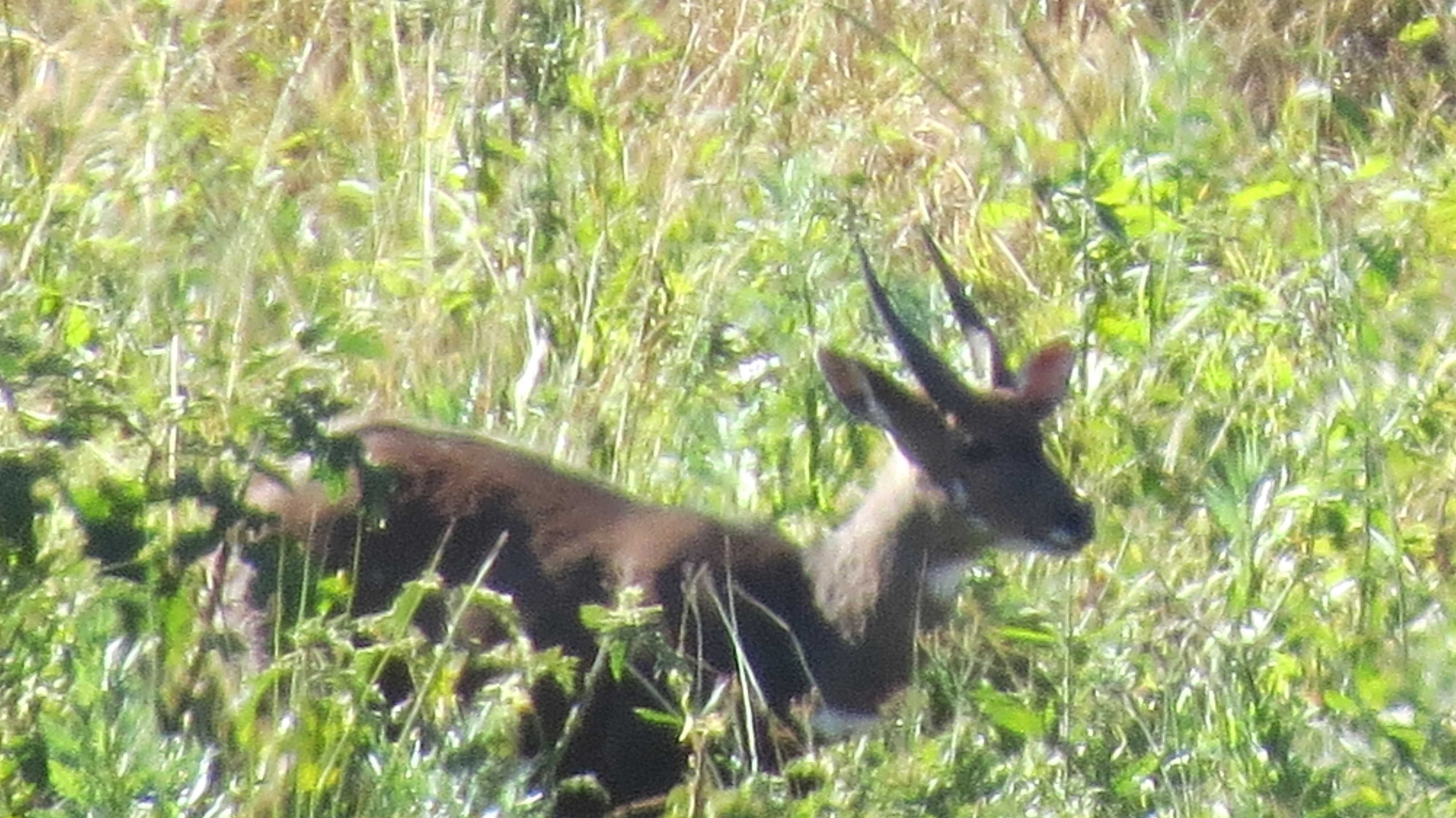 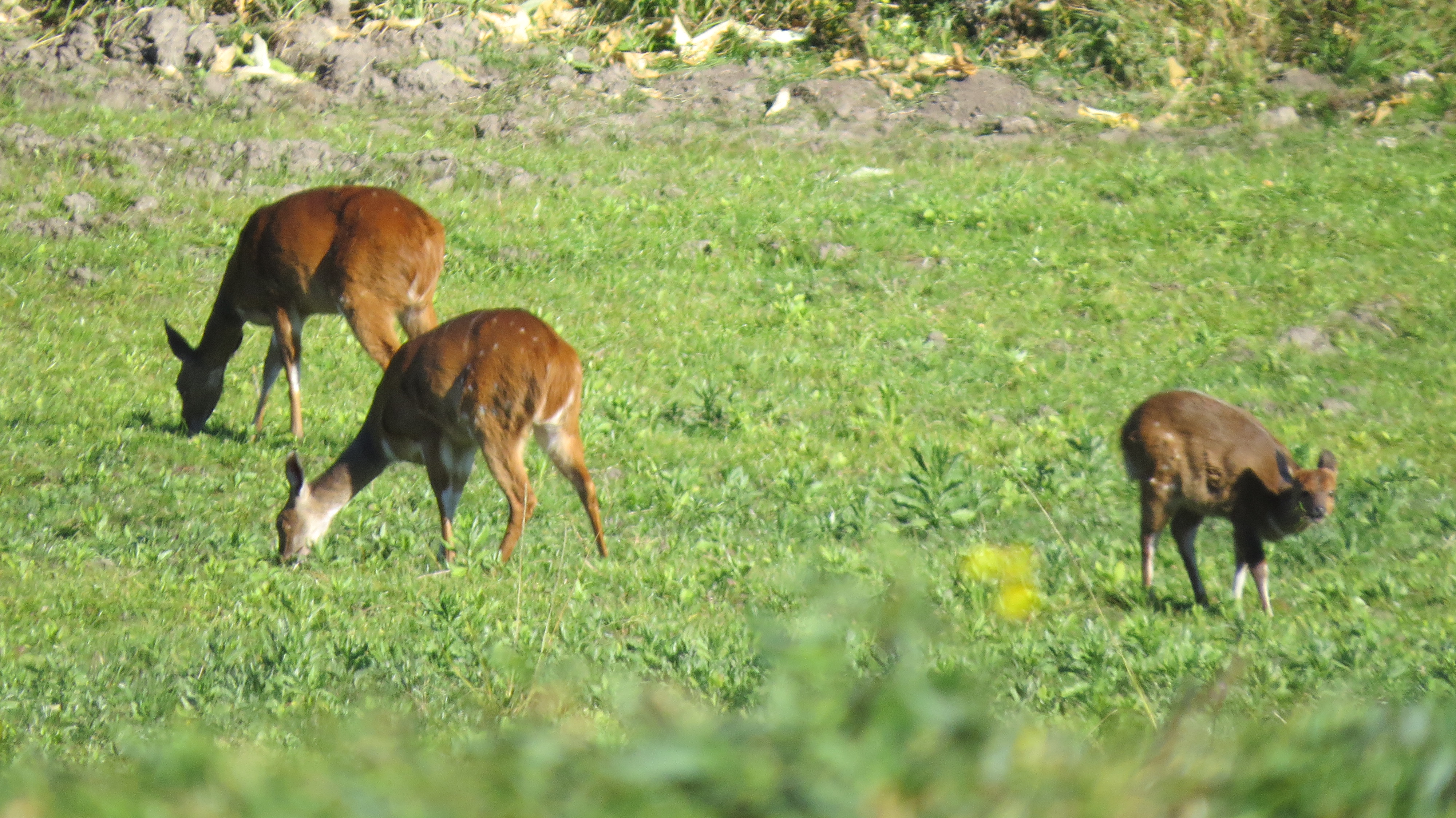 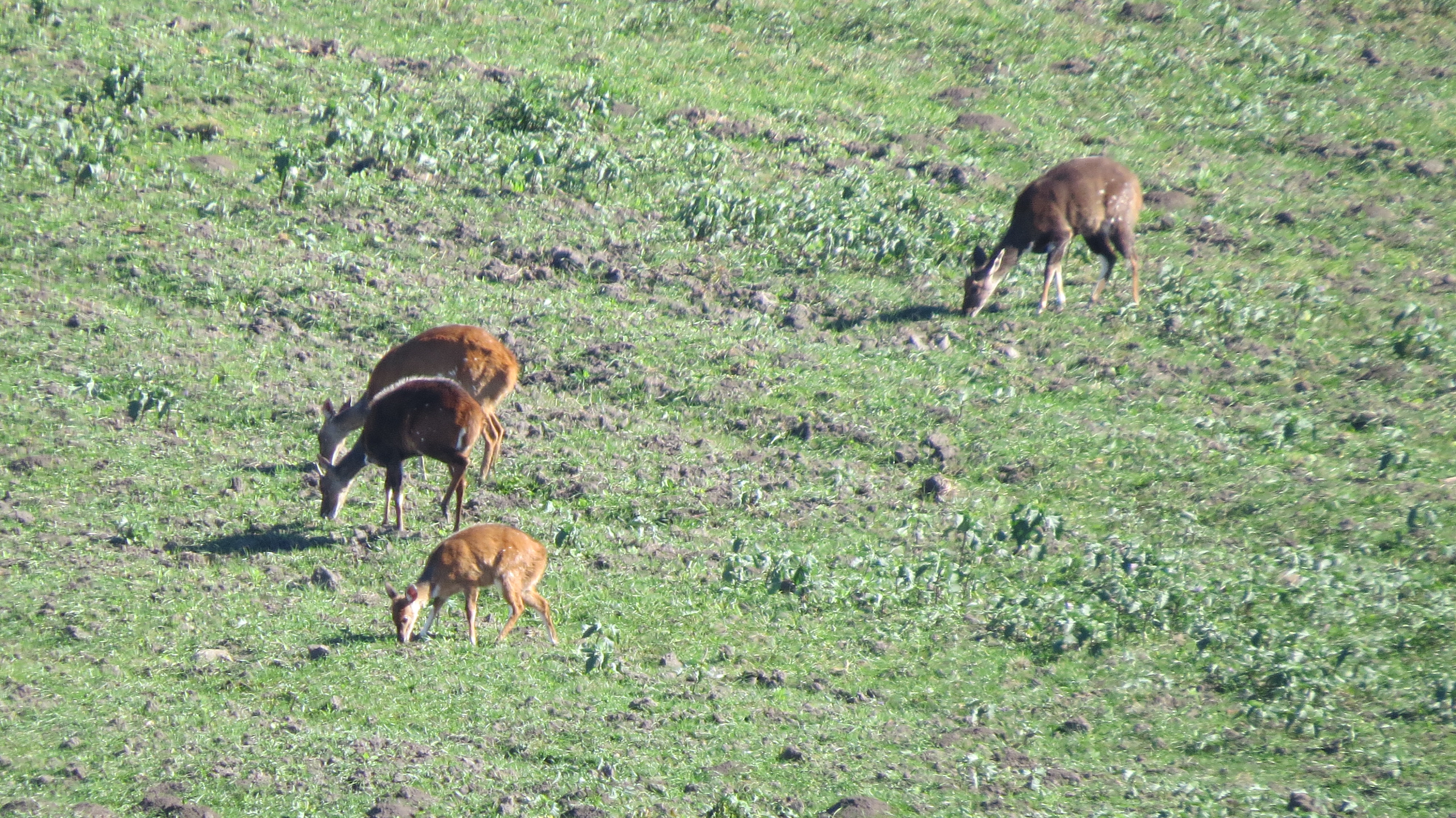 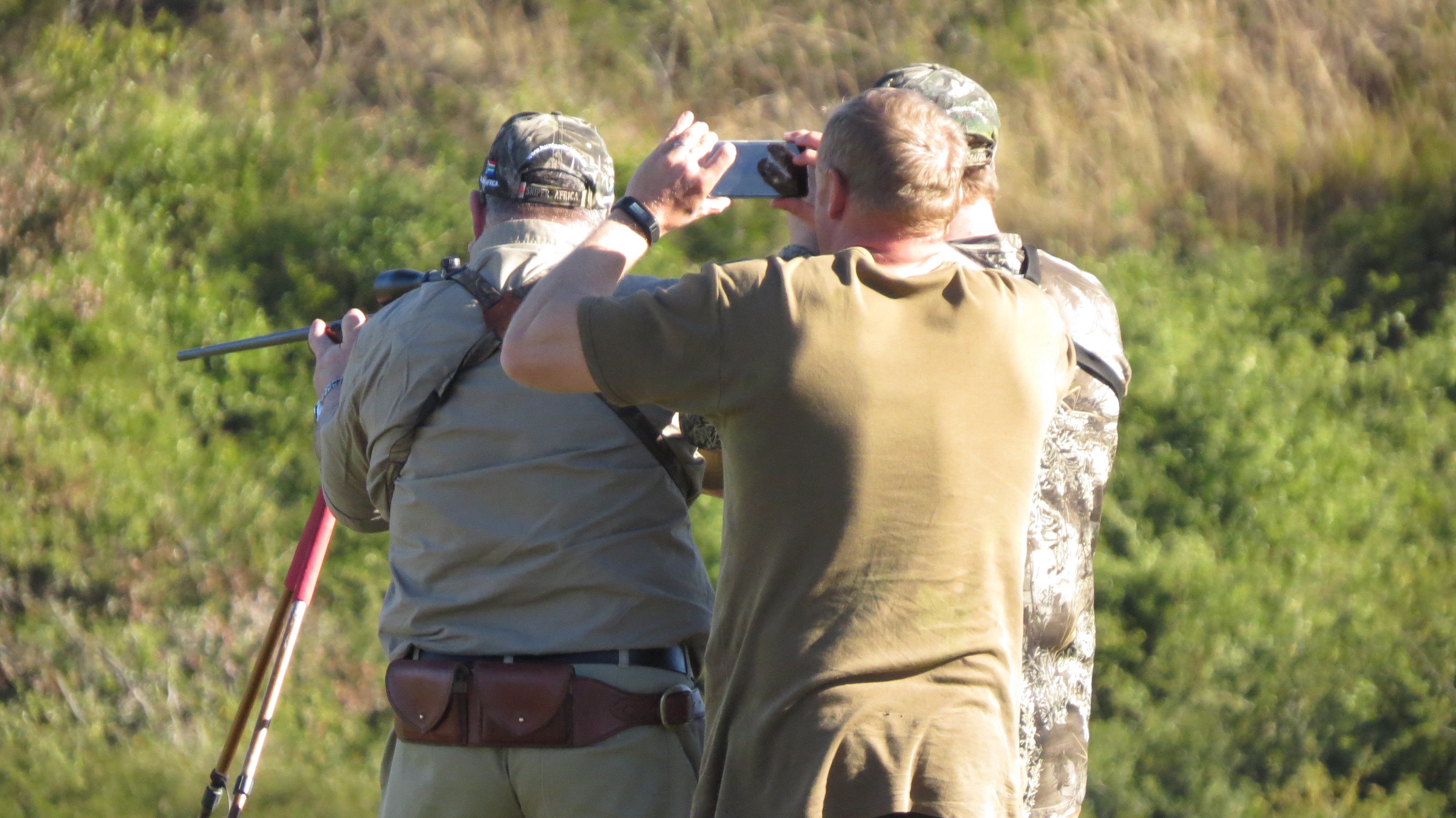 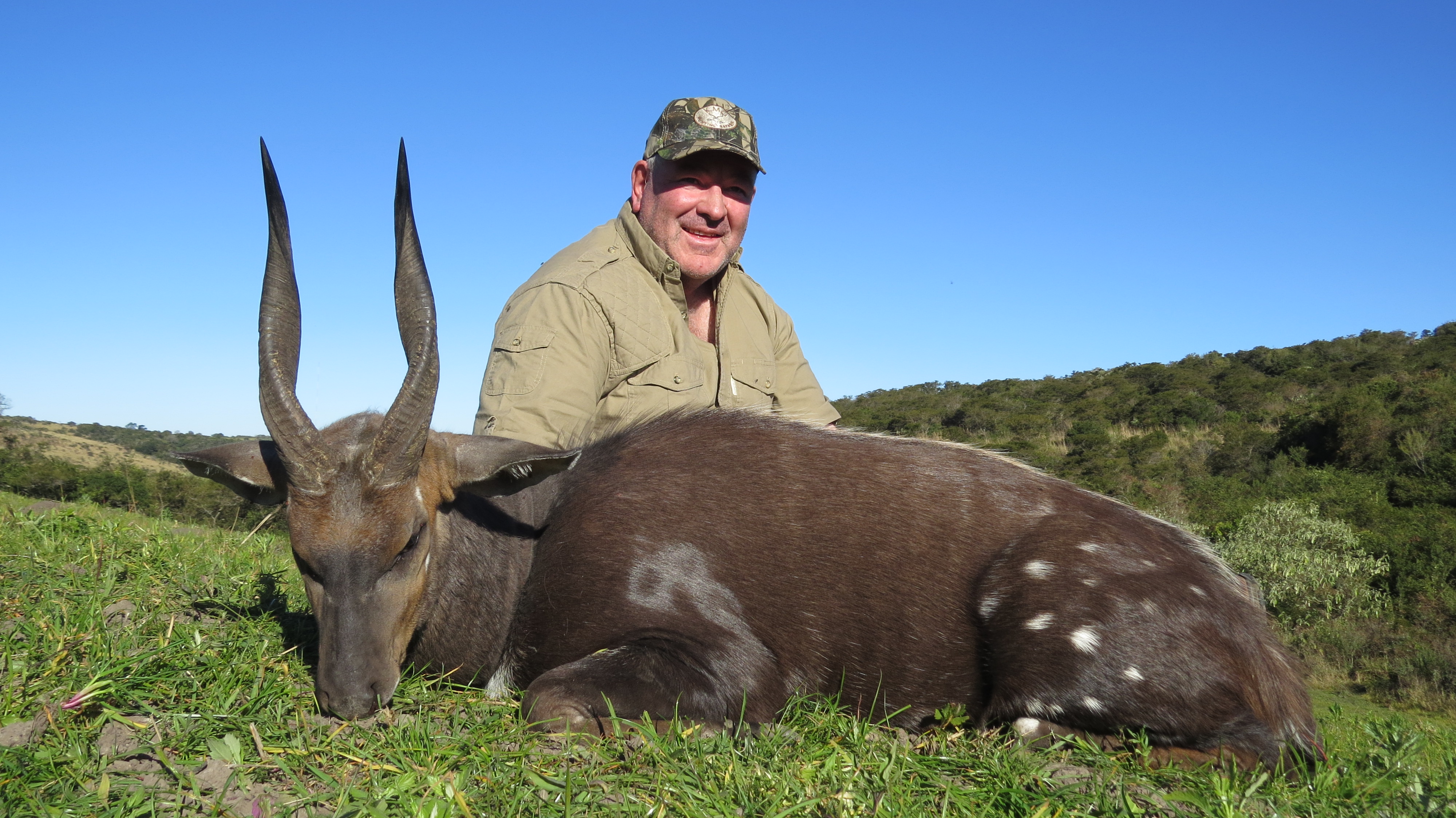 Yes a great start now tell us of the hippo!

Hippo! Hippo! Hippo!
The spots on your bushbuck are amazing! If you’re making a shoulder mount, you should have pillows made out of the backskin. It’s lovely!
Africa on my mind.

CAustin said:
Yes a great start now tell us of the hippo!
Click to expand...

Ridgewalker said:
Hippo! Hippo! Hippo!
The spots on your bushbuck are amazing! If you’re making a shoulder mount, you should have pillows made out of the backskin. It’s lovely!
Click to expand...

It is an amazing cape..... That's why it will be a full body mount

After a very successful first 2 days blacks and I had our main EC species done, and done well..... Tim needed to be back in time for dinner that evening for his daughters birthday and we also made it back for birthday cake.....
It was decided that with nyala and bushbuck out of the way we would concentrate on the hippo as it could happen the first day or it may take all week......or maybe not at all.... I must say that Marius had done a lot of ground work on the hippo so Martin and I headed toward a fairly remote community on the Great Fish River that had knowledge of a pod of hippo in their area. We called in and picked up the chief who was to accompany us on the hunt. We also picked up a couple of locals on the way that had been seeing the hippo and knew of their local stretch of river.
As we descended down into the river valley the river came into view, I couldn't believe how close we were going to be hunting to the mouth of the river. We were taken to the bank and a crew of us started looking up and down stream to locate the resident hippo. Nothing appeared at first and it was mentioned that the hippo had been seen at different times feeding on the opposite bank leaving the reed studded river to feed on the lush grasses in the morning sun but nothing showed. Then after some time, at first one hippo appeared, then a short time later became 2, then 3 until after a while there were 5 hippo surfacing in the same area.
We moved upstream to where the largest hippo was seen and cautiously glassed the water. Nothing stirred until a couple of hippo started popping up only briefly showing their ears and eyes before disappearing into the murky depths again. We had noticed the largest was just a little downstream so Martin and I quietly moved back downstream until we came up with the hippo surfacing broadside on totally unaware of our presence. I quickly sat the 416RM loaded with Woodleigh Hydro bullets comfortably into the shooting sticks and found my mark at 35m as the hippo was bracketed in a gap in the river lined reeds. I took up the trigger pressure and then the striker fell, the hippo disappeared and all was quiet as if nothing had happened at all.........
The shot felt right and Martin and another PH with us were super confident but without a body it felt weird. I know that mortally hit hippo can take a while to surface but this was a new experience... The ph's mentioned it could take 45 minutes or 4 hours for a downed hippo surface as a bloated carcass and so this would be the longest wait I have endured for the confirmation of a clean kill. We sat around with me wondering if the hippo would be upstream, downstream or not come at all when after 1 1/2hours I noticed it floating not 5m from where I had hit it..... 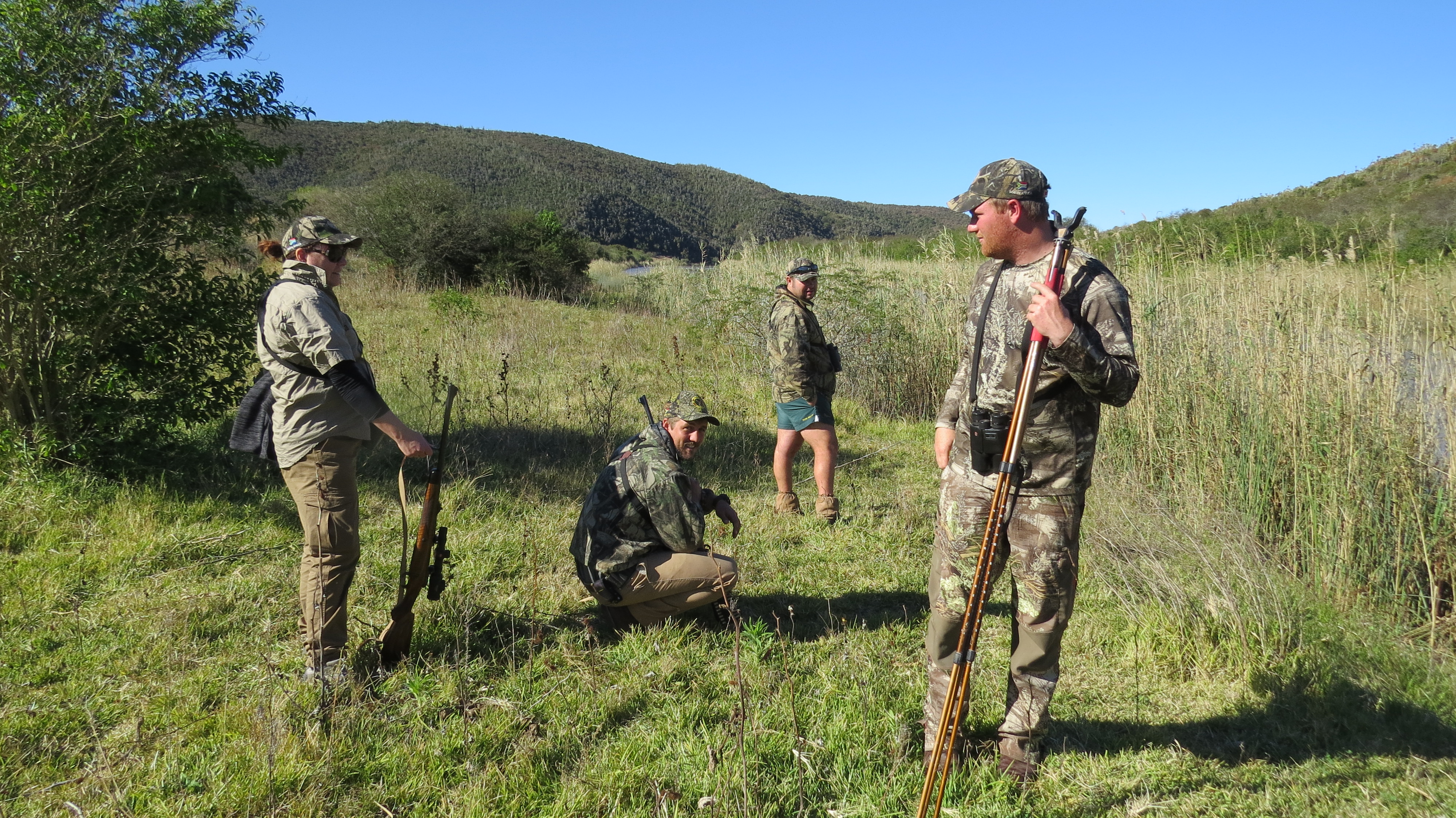 How stressful that wait must have been! My old heart probably would have been done in!
Africa on my mind. 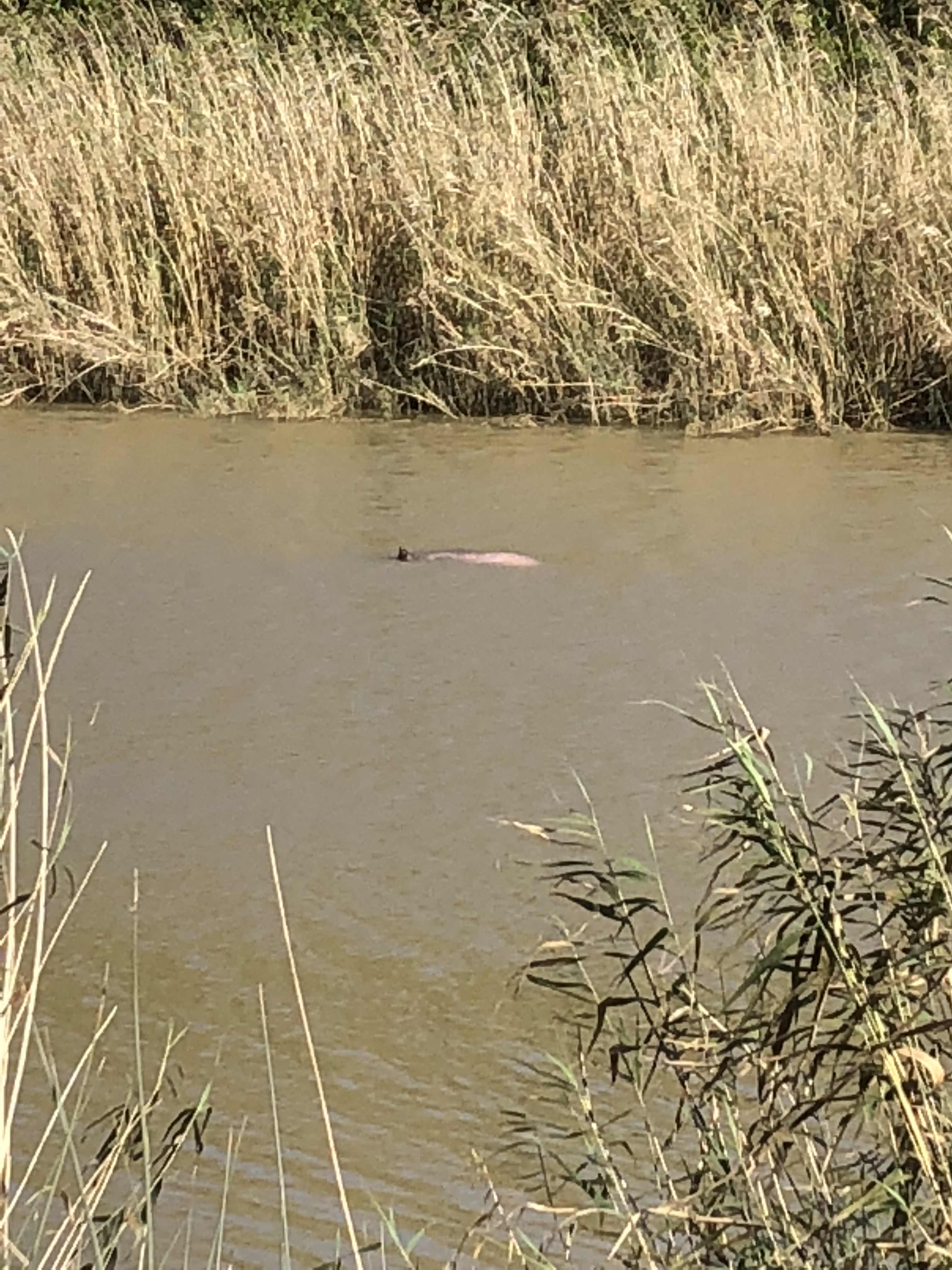 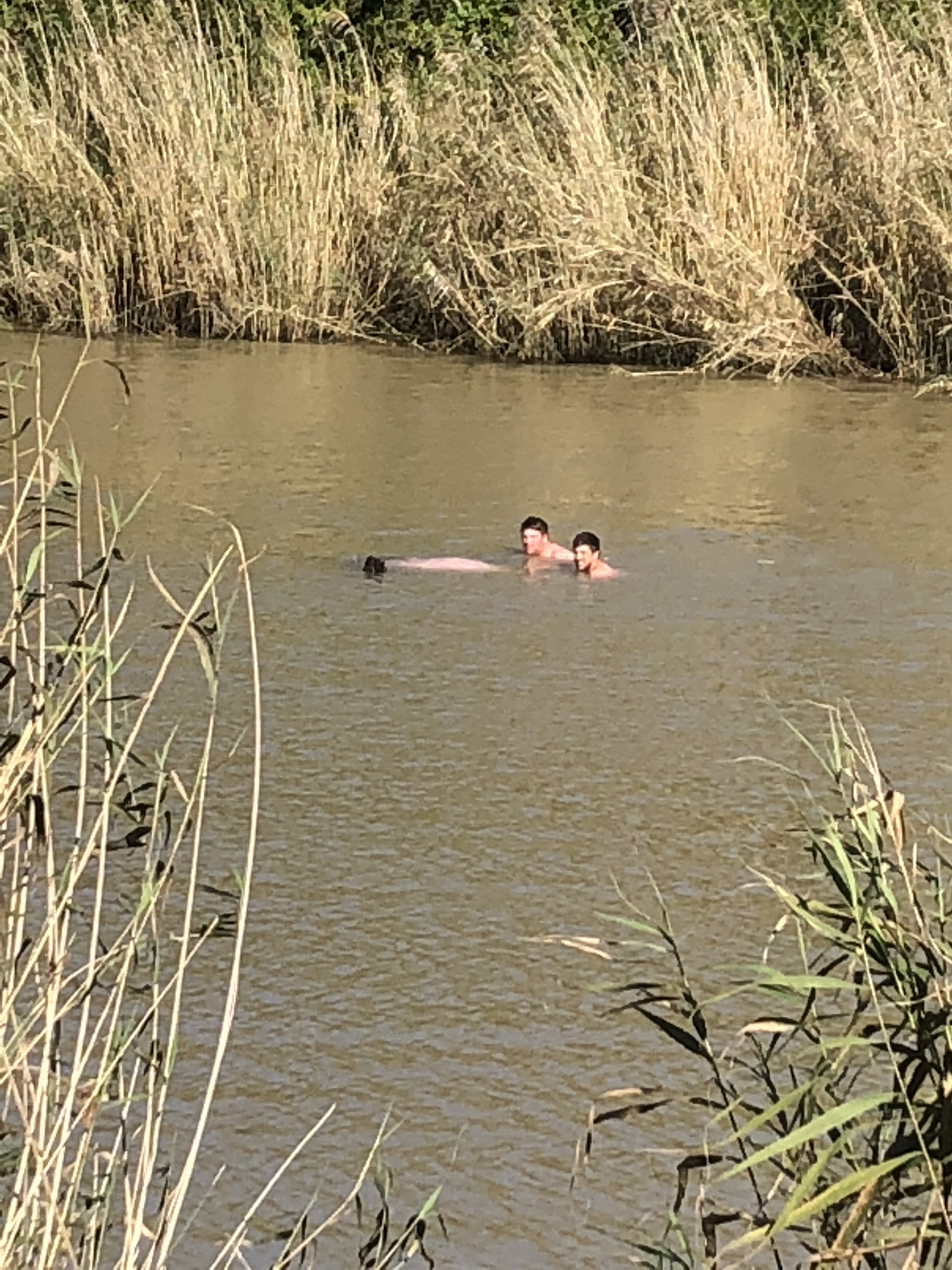 Awesome, Mark! Brain or chest shot? Are there crocodiles there or too far south?

Congrats on the hippo, and that bushbuck is gorgeous! Definitely on my list for the future

Congrats on the hippo sir. That waiting and not knowing is a killer!

BenKK said:
Awesome, Mark! Brain or chest shot? Are there crocodiles there or too far south?
Click to expand...

The next pics will answer that when I get home Ben...Correct on the crocs.

it's always nice when a plan comes together Congratulations on getting your hippo.

Congrats on a fine hunt at KMG with Marius and crew!
You must log in or register to reply here.