In the summer of 2017, I hunted plains game with Marius at KMG Safaris. This was my second hunt in South Africa, but my first time with KMG. I had such a great time, that I knew ( or at least dearly hoped) that I would be back someday.

A year later, I got to marry the love of my life, @Just Gina. She was going to nursing school full time, and I was working 65-75+ hours per week on a large construction project, so we elected to postpone a honeymoon until she was done with school, and my project coincidently, was scheduled to be complete about the same time. When I asked her where she would like to go for our honeymoon, she didn't even hesitate, she said “take me to Africa.” I knew exactly who to contact. A few conversations with Marius and our hunt was booked. I reached out to @Travel Express to line up our flights and stay with Africa Sky ( who also handled the rifle permits for us.) It took a few discussions and looking at animal pictures to come up with our complete wish list, but I knew I wanted and old blue eland as my primary wish, and to my surprise Just Gina knew right away she wanted a giraffe and red hartebeest. To those we added impala, zebra, gemsbuck, baboon and bushbuck, and our wish list was complete.

I would like to report that we spent the next several months getting in shape and preparing for the hunt, but although we were extremely excited, between work and school, it was difficult to find much time to prepare. One thing going in our favor though, is that we live close to a good shooting range and we have always tried to get there once a week. We knew where our rifles shot out to 300 yards and did practice a little ( not nearly enough) shooting off of sticks. We would be bringing my model 70 in .300 win mag, and her Tikka .308 win. We used Barnes Vortx ammo in 180 and 150 gr respectively. Just Gina also shot my CZ 550 in .416 rigby a few times to get used to the recoil (she handled it quite well).

May 15, we landed in Johannesburg after the long Delta 200 flight (we paid for comfort + seating which was well worth the money) and were met by Gilbert from Africa Sky who quickly helped us and his other guests collect our rifles and off to a great meal and rest at beautiful Africa Sky. The next morning Gilbert took us back to the airport and helped us check our luggage and rifles ( this was the first time I was not asked for a “tip” from the guy checking rifles) and we were off to Port Elizabeth. As we were waiting for the baggage carousel, I could see the most welcome smile of Marius waiting for us.

We drove to the lodge and were shown to our room. After settling in, we went to the range to check our rifles. My .300 survived the trip and shot just fine. @Just Gina’s first shot with her .308 was a couple inches to the left which I could tell frustrated her. I told her to shoot two more and she had 3 hole almost touching, so a few clicks of the sope to the right and she was back on the bullseye. Time for supper, shower and bed-tomorrow we would be hunting eland.


Hunt day 1. Today’s primary hope is for eland. As we were walking to a spot to glass from Gina slipped and went down on her knee. As I was helping her up, I asked if she was ok, and told her that she fell well. She gave me a dirty look and I explained that I was serious- she maintained muzzle control and didn’t yell out. The first spot we glassed from revealed eland way off in a distant valley. Body size and color make it look like at least one promising bull, but the location make getting to them, let alone getting one out, nearly impossible so we decide to check back on them later in the day if we can’t find anything else sooner. As we are moving, a lone eland bull is spotted bedded down in open grass at the bottom of a valley. Binoculars and spotting scope are brought to bear. He is huge! Just laying there, beautiful in the morning light, happily chewing his cud, and giving us great views of him. It’s the first morning of our hunt and there is my top wanted animal! My heart starts racing as I look for different routes to get to him, wondering which way Marius will lead us down to him, having mini panic attacks because I just know I’m going to make too much noise on the stalk, or blow the shot if I don’t but still anxiously waiting for the “ok, let’s go!” The bull stands up-good Lord their huge! He gives us a few good views standing, turns so we can see the other side, and I’m quivering like Rigby with excitement! Marius looks up from the spotting scope and says-”we can do better.” As we are talking, a second bull is spotted uphill from the first. This one gets Marius excited, that’s the one we will go after. The First bull starts wandering slowly toward the second and we can see that they don’t appear to be going far, just wandering and feeding, so we checking the wind and decide which way to circle from for our approach.

A few random pointers here for stalking game in Africa for those that may not have experienced it yet:


Back to the hunt. We ( Marius, Gina, a tracker, and myself) make a wide circle and begin our stalk. We played cat and mouse with those two bulls for hours. The nice part about becoming a contortionist pin cushion during an extended stalk is that it gives any pre-hunt jitters time to calm down. I lost track of how many times we were in range, the sticks went up and our target bull calmly wandered behind a convenient tree or his “little” buddy. Finally, it appeared that the eland had given us the slip, so we called for Lloyd to bring the bakki and sat down for a nice lunch. As we were eating we looked up and there stood the bull we had been chasing on top of the hill as if to laugh at us one last time before he walked off.


Zebra was also on my wish list and Marius knew of an area where they sometimes could be spotted so we thought we would give eland a rest for a bit and check that spot out. As we approached, we spotted impala, blesbuck, black wildebeest. Then we did see zebra as well, off to the left of that eland bull bedded down. Wait-eland bull ?! Let’s get a better look. Yes he is big and old! And now he is moving-quickly. After a bit of a race and we were able to get set up ahead of where we hoped he would come. Marius set up the sticks and I setup the rifle watching the opening where he hoped the bull would come out. There he is! “251 yards” Marius said as he crouched to give me his shoulder for my left elbow. I don’t remember if I gave Marius the chance to cover his ears before I shot or not, but I knew the shot felt good, but I lost sight of the bull in the recoil. The next instant, Marius is running down hill, kind of circling the direction the eland was facing when I shot. I kind of assume a P.H is like a bomb squad technician where if you see them running, you try to keep up. Picture a jackrabbit being chased by a handicapped gorilla. As we slowed and started searching for the eland, I was assured the shot was good. Suddenly Marius and the tracker freeze and said there he is. I finally spotted what they were looking at which for me was nothing more than a pair of horns wobbling side to side before dropping down behind some brush. “He’s down!” As we came around he was still flopping a bit so an insurance shot just in case and he was done. There lay a beautiful beast! I took a moment to give it a last bite and then began admiring this awesome animal. Gina and Lloyd arrived and congratulated me. and the preparations and pictures began. 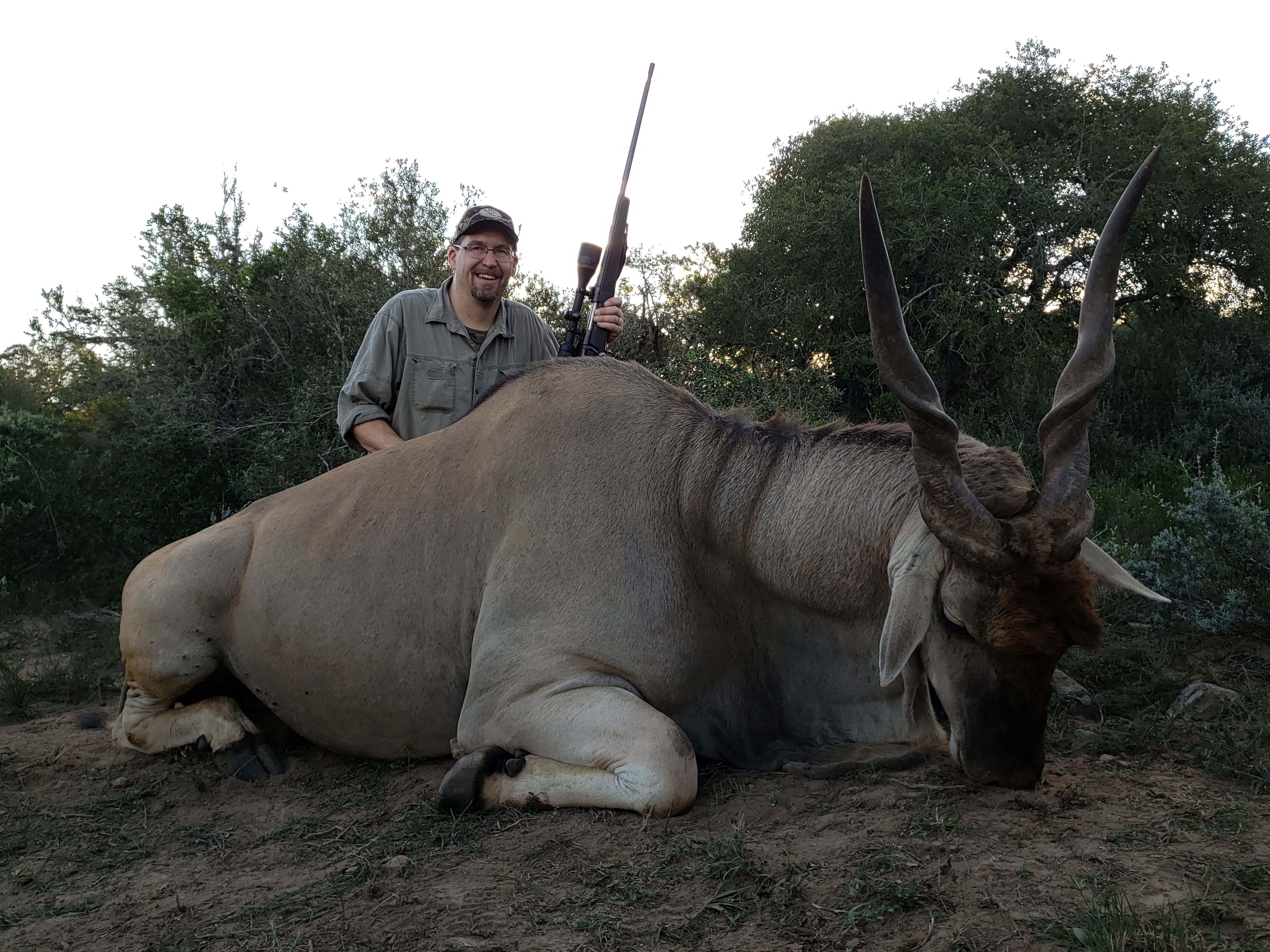 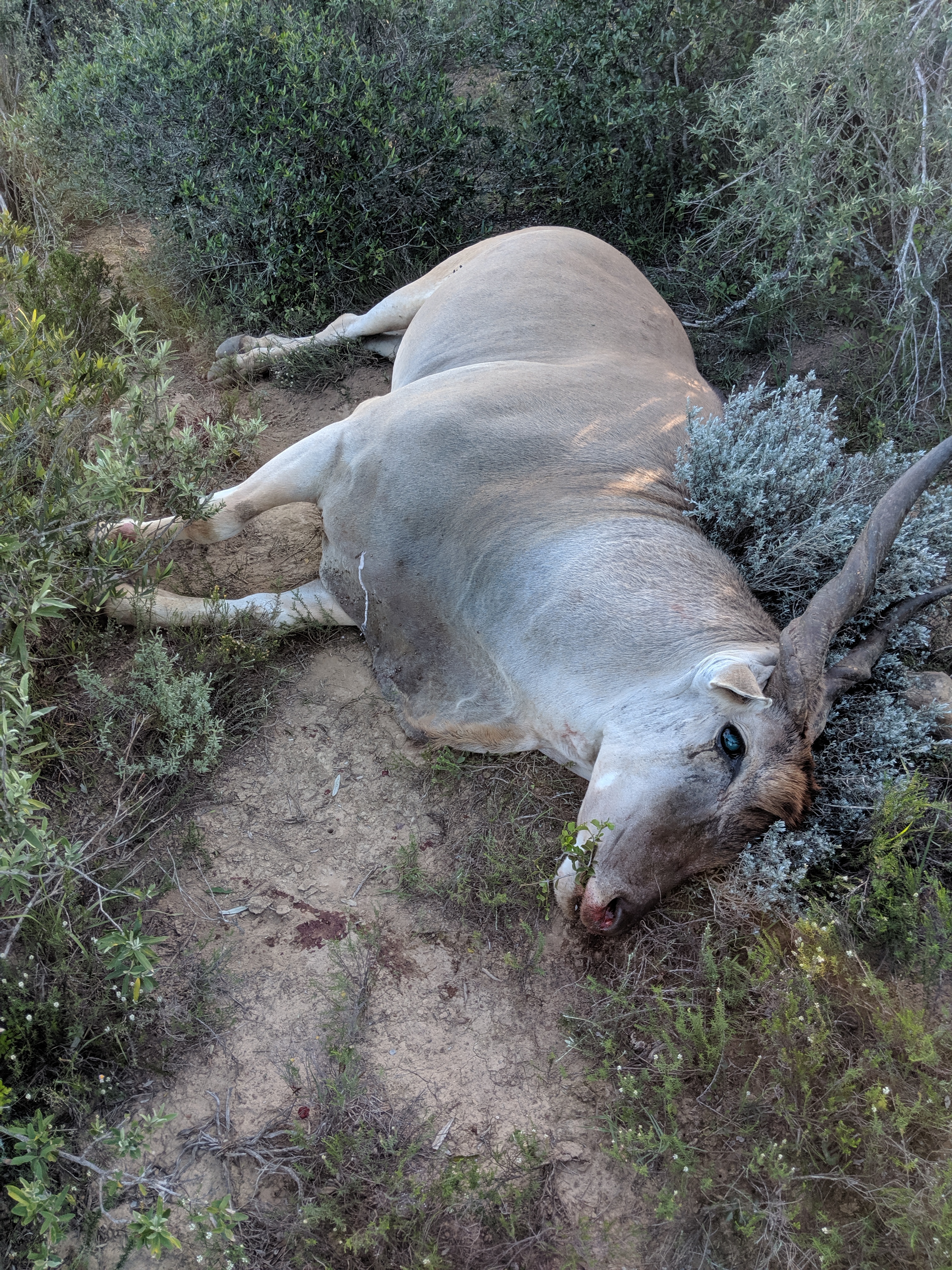 Keep it coming and nice eland!

Wow. Really nice Eland! I am always amazed by the overall size and the massive neck!! Way to go.

Everyone of your 7 points was exactly what I followed while hunting with Marius! For nearly the entire time we were across the valley from my kudu, I never really saw him until we were getting into position to shoot. Even then, Marius had a look through the rifle scope to ensure that I was indeed on the right animal! And I don't even want to think of all the scenery I missed because I was focused on his heels as we crept after our intended targets!
"I don't need to shoot farther...I need to hunt closer." - G. Sitton

Tip: While you're following in single file behind those that may have a relative vertical challenge, do not assume they are following a path that anyone but the Baka could follow.

Congrats on your Eland and most certainly to Gina for keeping the muzzle pointed the right way during a fall. It only takes one bad incident!

Beautiful old Eland and a hell of a way to start, congrats!

Great tips, nice bull and now for the rest of the story.....?

Looking for the rest of your hunting report so I can post mine!

congrats on that awesome eland!

One fine eland! Good job!
Africa on my mind.

Just Gina said:
Looking for the rest of your hunting report so I can post mine!

This sounds like the beginnings of a honeymoon you will both long remember.

Shootist43 said:
This sounds like the beginnings of a honeymoon you will both long remember.
Click to expand...

It was the most AMAZING time that I will not ever forget!!!

Didn’t Marius send you his instruction manual on how to follow and not step on anything that can crackle or snap? Just kidding I love the guy! Lol. Great eland. Congrats.
Tommorow is promised to no one. Go live your dreams.

Great Eland, Congratulions
"There is nothing so good for the inside of a man as the outside of a horse."- Winston Churchill

johnnyblues said:
Didn’t Marius send you his instruction manual on how to follow and not step on anything that can crackle or snap? Just kidding I love the guy! Lol. Great eland. Congrats.
Click to expand...

inkonkoni
Enjoy the bush with Respect
Yesterday at 6:24 AM •••