Reading this while in line at Sam‘s. Waiting for them to open, looking for Lysol wipes!
Y'all can go to hell, I'm going to Texas! Davy Crockett

Back at the larder one big chicken 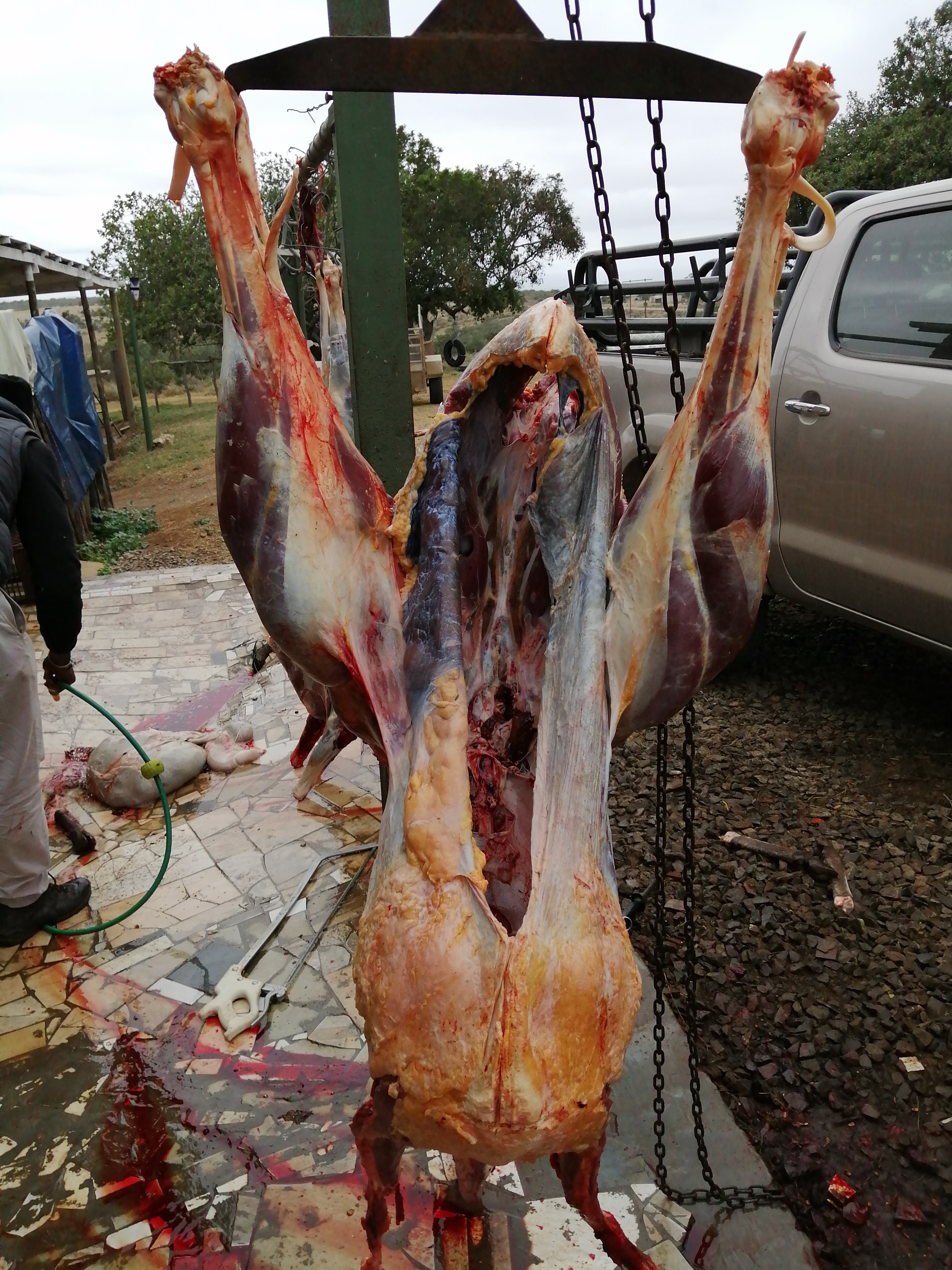 Sand Rat said:
Reading this while in line at Sam‘s. Waiting for them to open, looking for Lysol wipes!
Click to expand...

Remember to keep up your social distancing and stay safe the both of you.
Last edited: Apr 8, 2020

The afternoon was spent on the look out for bushbuck. We went to one area not hunted much saw kudu but only a young bull with some cows a few baboons and some steenbok we spent a couple of hours before heading back to the lodge to get ready for the evening bushpig hunt. 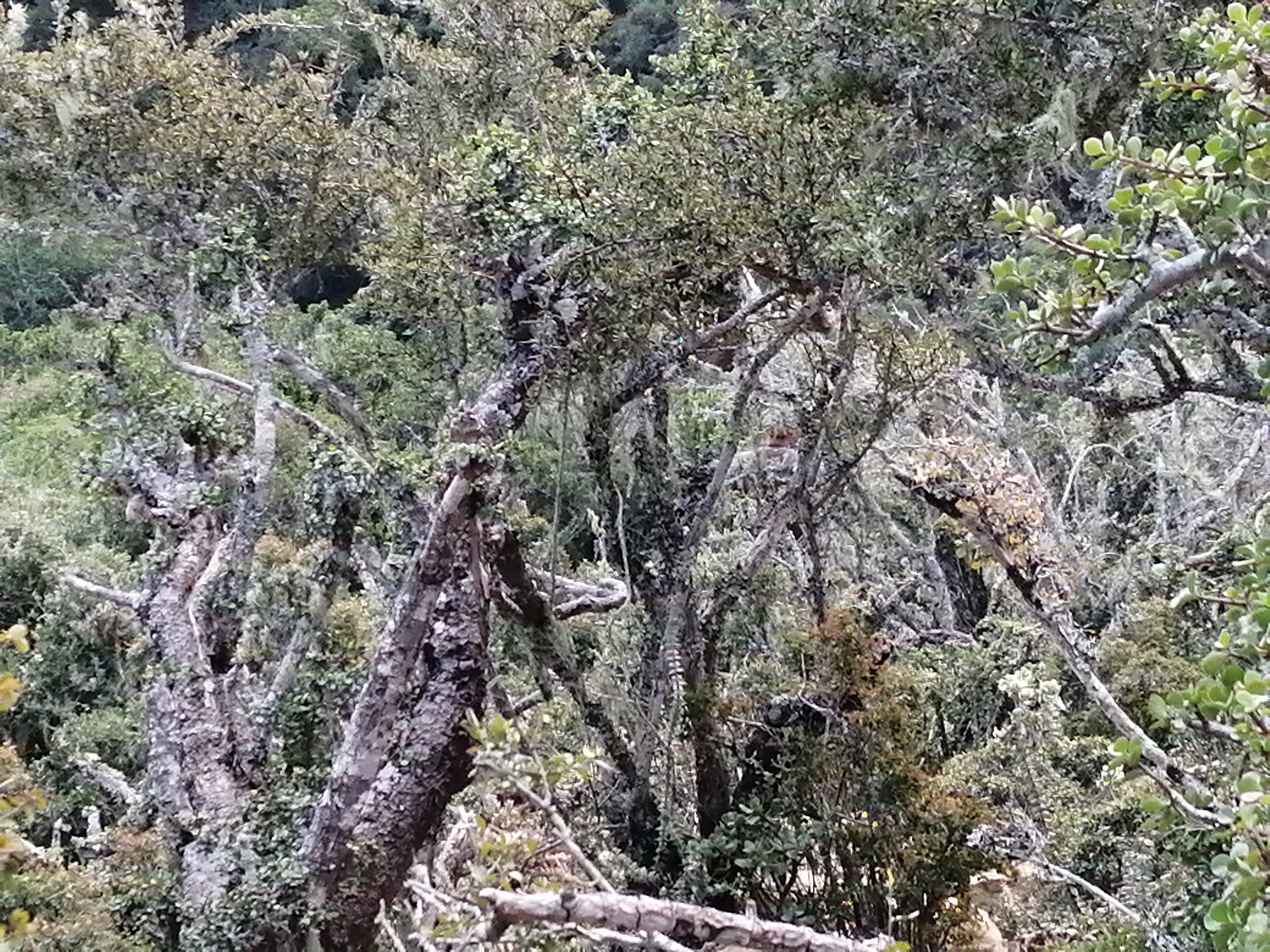 Here's something to pass the time see if you can spot Marius.

Dudders said:
Remember to keep up your social distancing and stay safe the both of you.
Click to expand...

Thanks Richard, the best to you and family as well!
Y'all can go to hell, I'm going to Texas! Davy Crockett

Once the light began to fade we again headed to the bushpig blind it was very still this evening we made ourselves comfortable as you can and began the wait. It was difficult to get the right amount of clothing the first night was to hot and to night was to cold which was made worse by obviously just sitting still. As we sat starring into the dark you could hear every noise, the birds flying around and various animals some quiet some loud as they passed around us as we waited. As we sat in silence and began to relax looking into the dark the days events begin to catch up and I found my eyelids slowly growing heavier but fighting to keep the open, I would allow myself to close my eyes and count to 30 then force myself to open them, each time just a few seconds more I told myself. I noticed marius was now lying on the floor pretty much doing the same. I opened my eyes it was only 30 seconds I told my self I could see the glow of the light on the bait I came round quick but nothing we waited a while and still no action we called it a night and would try again tomorrow.

This morning we would hunt Mupunzi itself we drove to the far end of the property and stopped and began to hunt one of the valleys looking for bushbuck, as we worked our way along the valley stopping and glassing at various spots along the way we saw a nice looking duiker. we quickly got the boy set on the sticks the little ram was slowly working its way along the slope opposite. We watched through the binoculars and saw the dirt kick up above him the first shot had gone high we thought the game was up but the ram just looked around and carried on he stopped once more and this time it dropped on the spot, we watched no movement and sent the boy and Lloyd to retrieve it we would guide them to the spot then go fetch the vehicle. As we watched them and the dogs locate the duiker the ram scrabbled down the bank with the dogs and all in hot pursuit. Me and Marius ended up running back to the truck and driving round to met them where having caught the ram it was dispatched with Marius's 9mm. 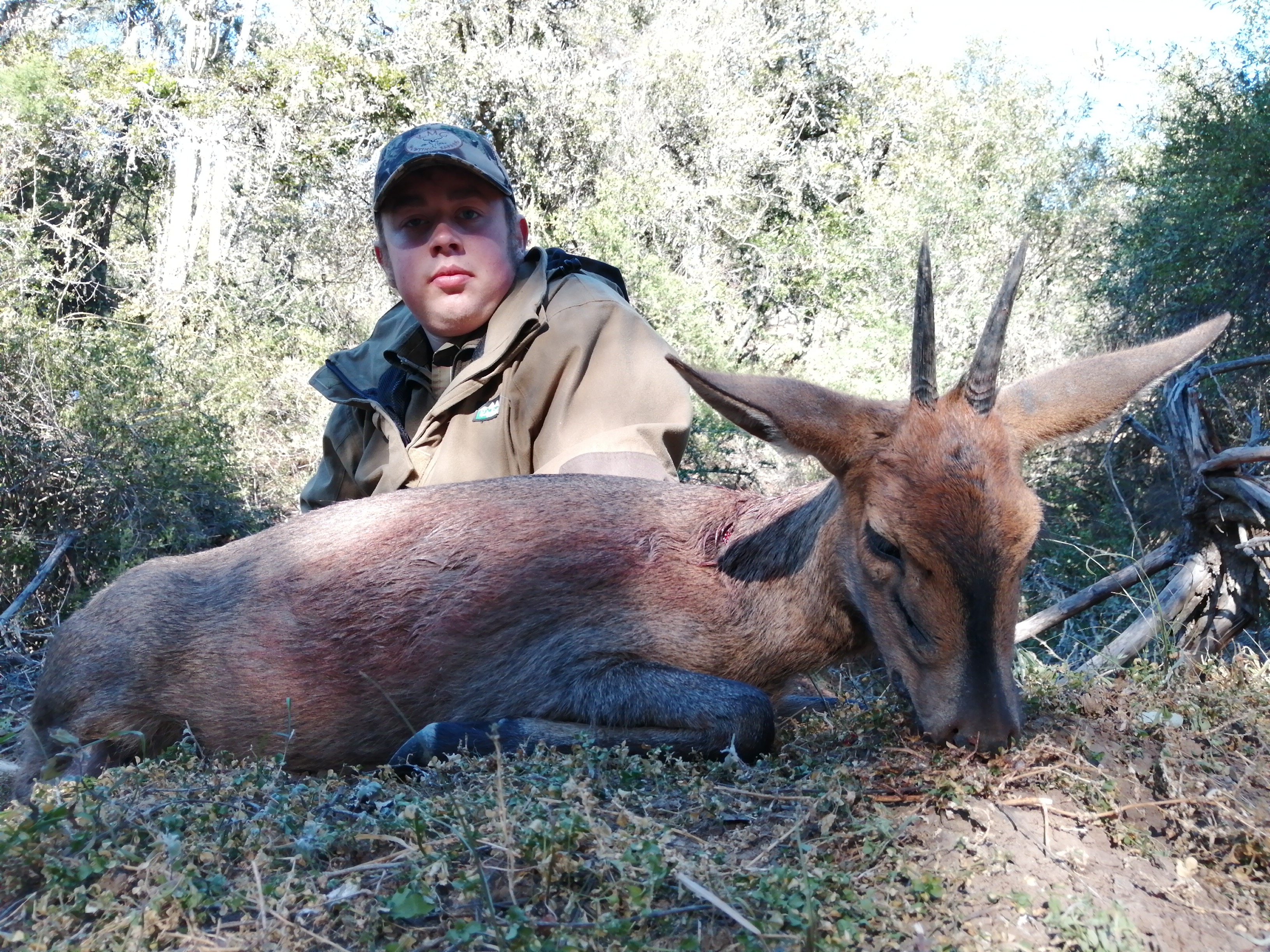 The afternoon we split up looking for bushbuck the boy went off with graham on mupunzi and Marius and I went back to a spot we had been earlier in the week. We spent the afternoon scanning the thick scrub on the valley side as we were beginning to think about heading back marius spotted a bushbuck ram after finally managing to find it in my binoculars we began to set up for a possible shot he was in the real thick stuff but heading towards an area that was slightly more open. we moved no more than 10 feet just to get a clearer view but were spotted by a couple of kudu cows that were above where the bushbuck was located and we were busted, they barked and took off spooking the bushbuck along the way we waited a while just in case the bushbuck would return but no luck. We left to head to the bushpig blind we stopped of at the lodge to pick up some gear and this time took the small blankets off our beds to place on the seats just to give us a little more comfort while we waited this was going to be a long night. We arrived at bushpig site and settled in for the evening. the routine followed the same pattern as the other evenings, The evening wore on and the eyes lids became heavy to counting game began again only this time as I opened my eyes a ghostly white form passed in front of me I rubbed my eyes and no still there and oh two more the bushpig had arrived now I was awake. I prodded Marius who was resting on the floor again. made ready with the rifle and waited we had already discussed what to look for the difference between the boars and the sows and when Marius whispered which one the boar was I had already located him feeding behind the females we waited as they milled around feeding in the dark. Marius making sure I still had the boar located the sows gradually moved aside and I took my chance the boar dropped on the spot. Third night lucky. 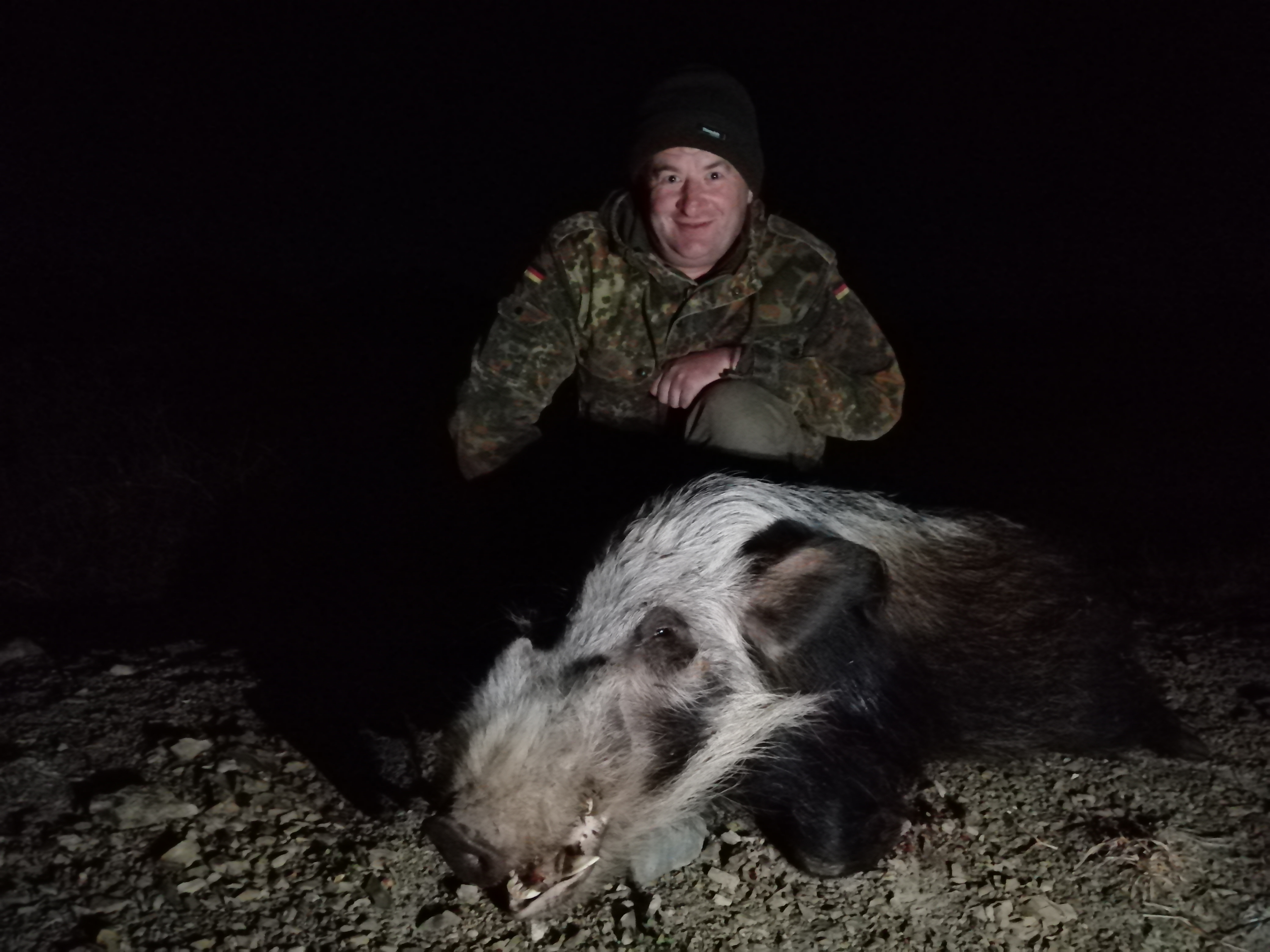 Although its a lot of waiting in the dark it is also quite exciting and when the bushpigs do turn up it certainly gets the blood pumping I can definitely see me doing this again and why the locals love it.

Sunday was a relaxing day spent fishing out of port Alfred we wanted to go fishing on our first trip but ran out of time so it was definitely happening this time and it was well worth it just for the trip out of the harbour. The fishing was good lots of action so much so that I never really got time to take any photos and with abit of father son rivalry on the biggest fish front which yes of course I won. 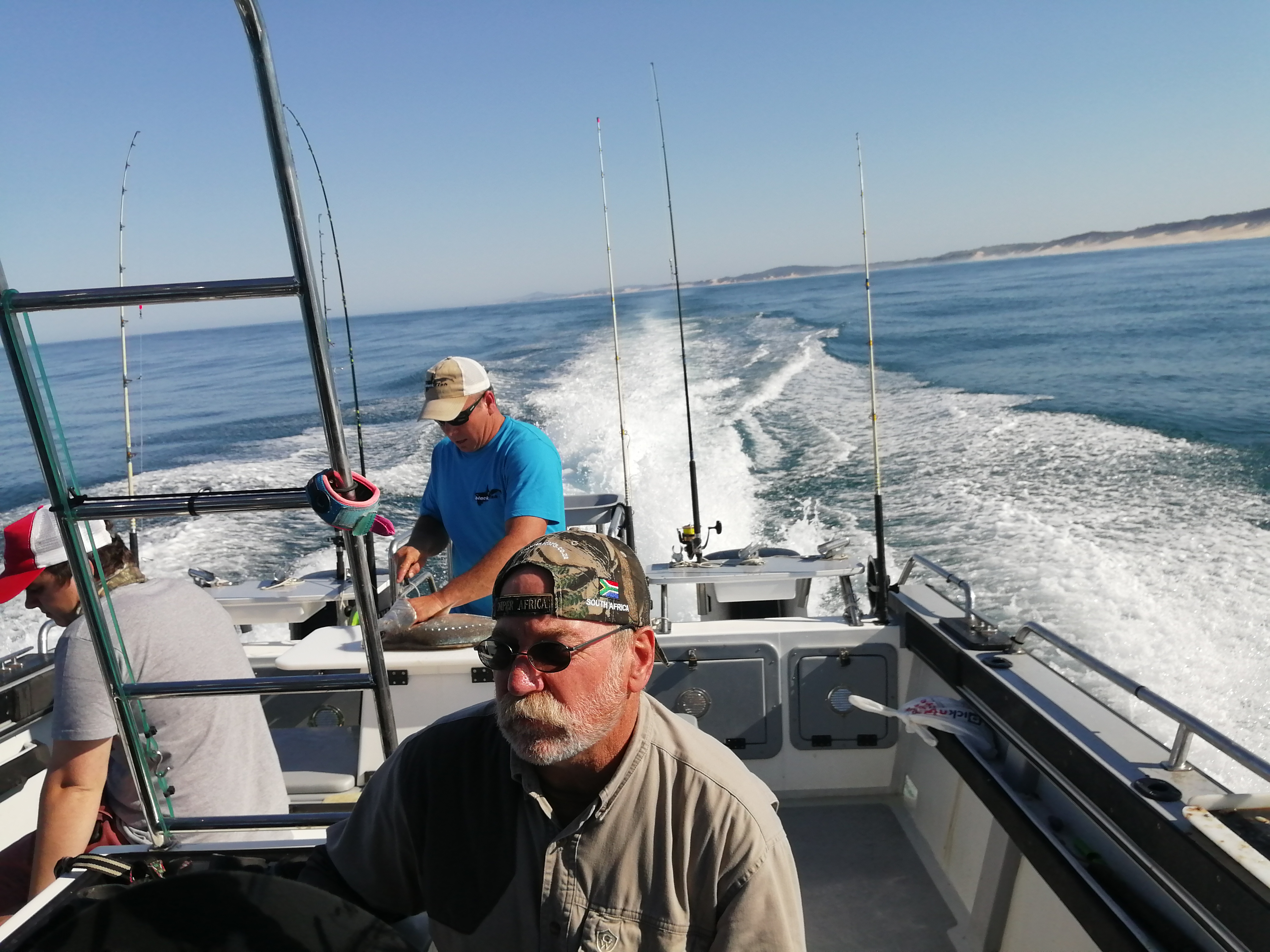 We were met by Marius on our return and had lunch overlooking the sea before returning to the for a fish supper where the boy volunteered to prepare the fish, which basically meant me. The fish turned out good and was enjoyed by all present and best of all I did not have to clean up after.

Great stuff. If I am ever able to get back there, bushpig is very high on my list!
"I don't need to shoot farther...I need to hunt closer." - G. Sitton
You must log in or register to reply here.