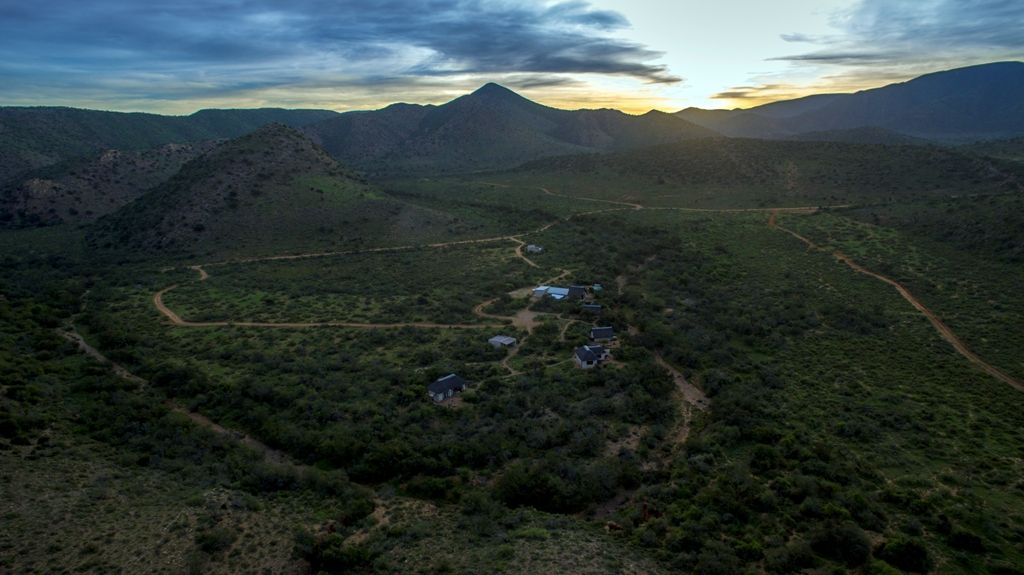 Everyone at Karoo Wild was eagerly awaiting Keith's 2019 buffalo hunt. Keith and his son, Jake, first hunted with us in 2014. In 2016 Jake's girlfriend, Lauren, accompanied them and Jake took the meticulously planned opportunity to propose to her on a mountain side overlooking the African plains. The family has a
special connection with our extended famly at Karoo Wild Safaris and we were happy to see our friend Keith back in South Africa, a country he has developed a love for. Top of the hunt list was a cape buffalo and the rest of the spiral horn family, an eland and bushbuck. Keith hunted plains game with my CZ 7x64 loaded with 160 gr Nosler Accubonds and for the cape buffalo he was to use my 375 Ruger loaded with 265gr GS Custom rounds. Paul, a professional cameraman, joined us for seven of our nine hunting days

The first day was an easy one getting Keith accustomed to the different rifles on the range and hunting a cull impala for a rug. We passed on several waterbuck and kudu. The remainder of the day was spent getting some footage of the lodge and relaxing with drinks at the campfire. 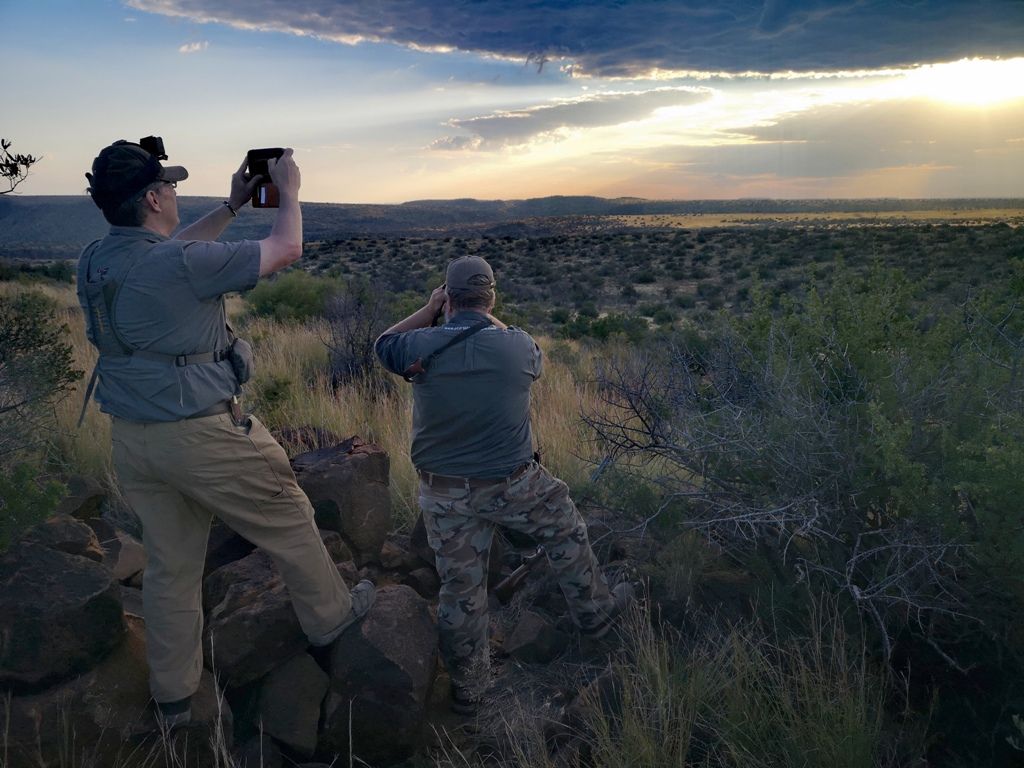 Early the next morning we headed north to our 40,000 acre concession to hunt cape buffalo. There we met up with Mynaard who was to accompany us on the buffalo hunt as a second professional hunter. We headed out after lunch and identified an area where buffalo tracks and dung were discovered the previous day. We climbed up to an elevated koppie and waited there for buffalo to emerge around sundown. It was practically full moon and we knew the buffalo would be grazing primarily at night leaving us a narrow window of opportunity to locate them around dawn and sunset. Shortly before sunset, with no sightings of any buffalo, we decided to drive to another area where we'd earlier dropped Mitchell to spot. Driving down a narrow track into a valley, we saw three buffalo bulls emerging from the bush 300 yards to our right. I kept driving but even at that distance at least one bull stuck out as an old hard bossed bull. We drove out of sight a few hundred yards down the track and then we stalked back. The wind was precarious and we had to keep as far east to avoid them picking up our scent. It was painstakingly slow as we had to keep our noise level down to a minimum. We were very close, 80 yards out when they spotted us and bolted into some bush before running through a small open section. One bull went left, the other two ran across our field of view. We hurried to get into position and Keith was quickly in position. Mynaard imitated a buffalo bellow, the lead bull paused and Keith fired. It happened as quickly as you just read it. The shot thumped but the bull gave little sign of being hit. He barrelled towards the edge of the bush in the distance and I was sure he was getting away when he slowed, stopped and tumbled. We rushed to the spot to find him expired from a lung shot. He was a magnificent buffalo with a good spread. His bosses were wide and rock hard. What a fantastic moment, well done Keith. We waited for the crew to come help us load and that evening we celebrated Keith's success with a fine whisky. 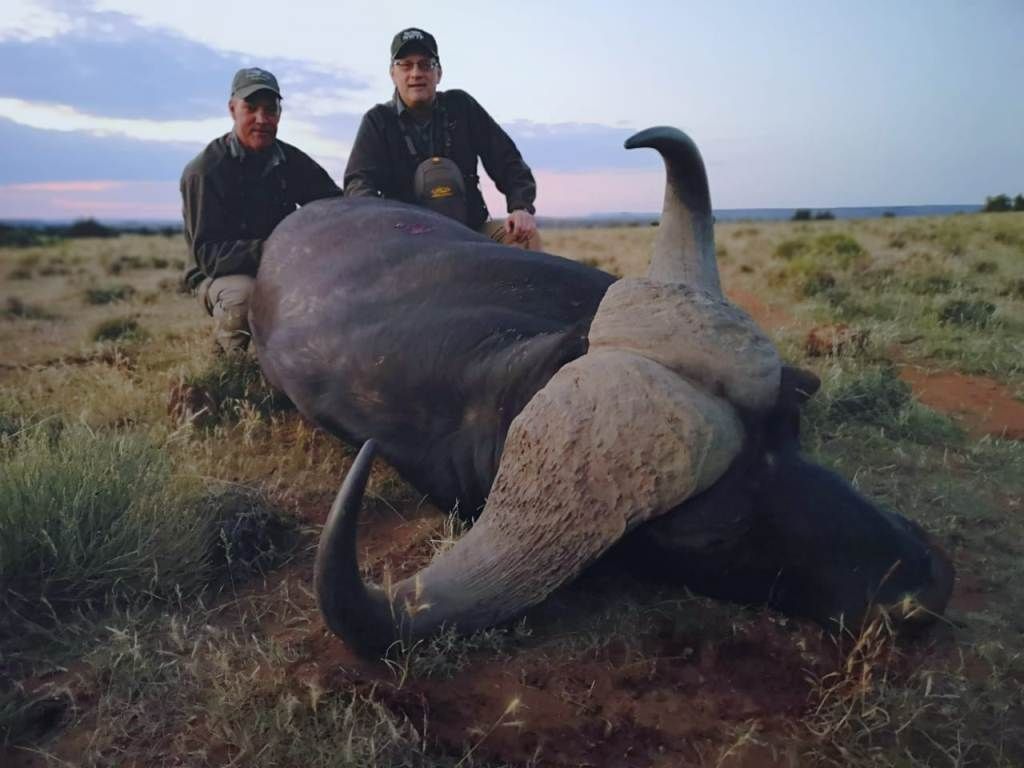 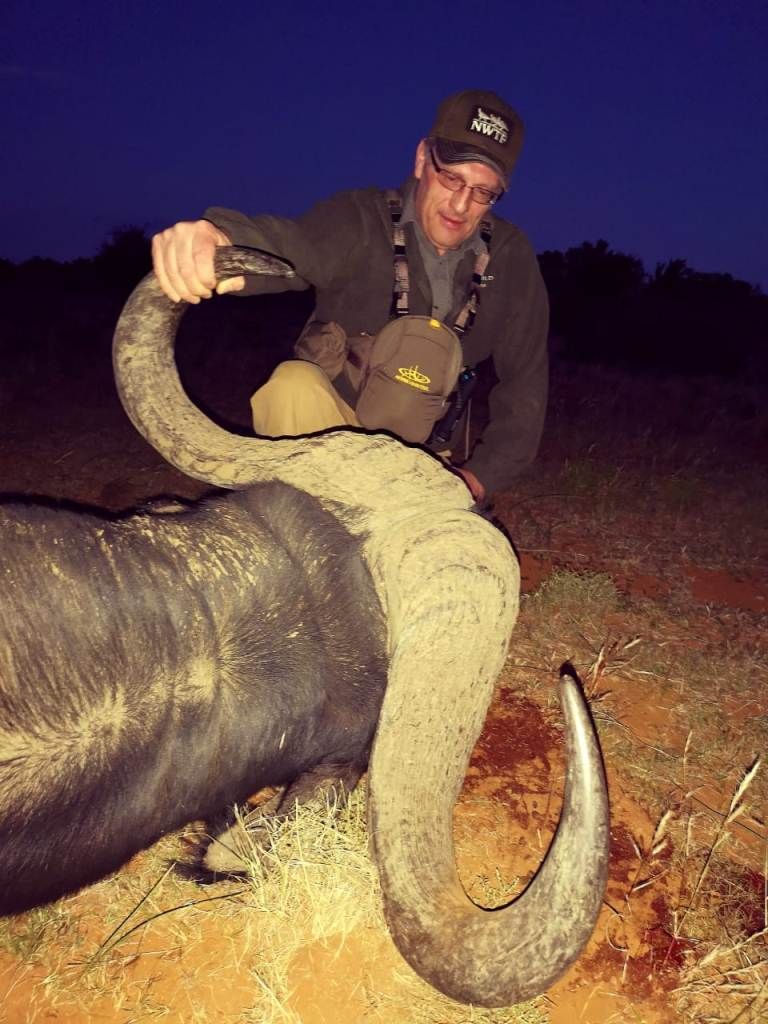 The next morning was spent in search of a Hartmans Zebra. They're slightly bigger than a Plains or Burchells Zebra and have no shadow stripes on their white stripes. The Hartmans are indigenous to parts of the Northern Cape and there is a large herd on the concession. Late that morning we sighted some high on a ridge between two peaks. We hiked up to above them but the wind was swirling and they must have scented us. They ran down the slope, across the valley, out of sight. Around midday, we saw another small herd on a plateau. We started the stalk from several hundred yards back, the wind perfectly in our favour. They were grazing on the edge of some small clumps of bush and we had to get in tight to sight them. Less than 100 yards out, a big stallion appeared directly in view. We ducked down and I set up the shooting sticks from a sitting position. Keith slowly stood up, aimed and fired. The shot hit a bit low on the leg and the zebra was off, trailing the herd by some distance. We couldn't find a blood trail but we followed them to where we last sighted them leaving the plateau via a sharp drop off. Far in the distance on the edge of a plain below us we could see the zebra walking slowly away. We followed, pausing whenever he paused to avoid him spotting us. We closed the distance to two hundred yards, being extremly careful to avoid spooking the wounded stallion. Several shots and a mile or two later, the zebra was down. Although Impressed with this zebra's resilience, we were out of breath and exhausted from our chase. After the crew helped us load the stallion we had a rather late lunch at the river's edge and headed back to the lodge at 5pm. 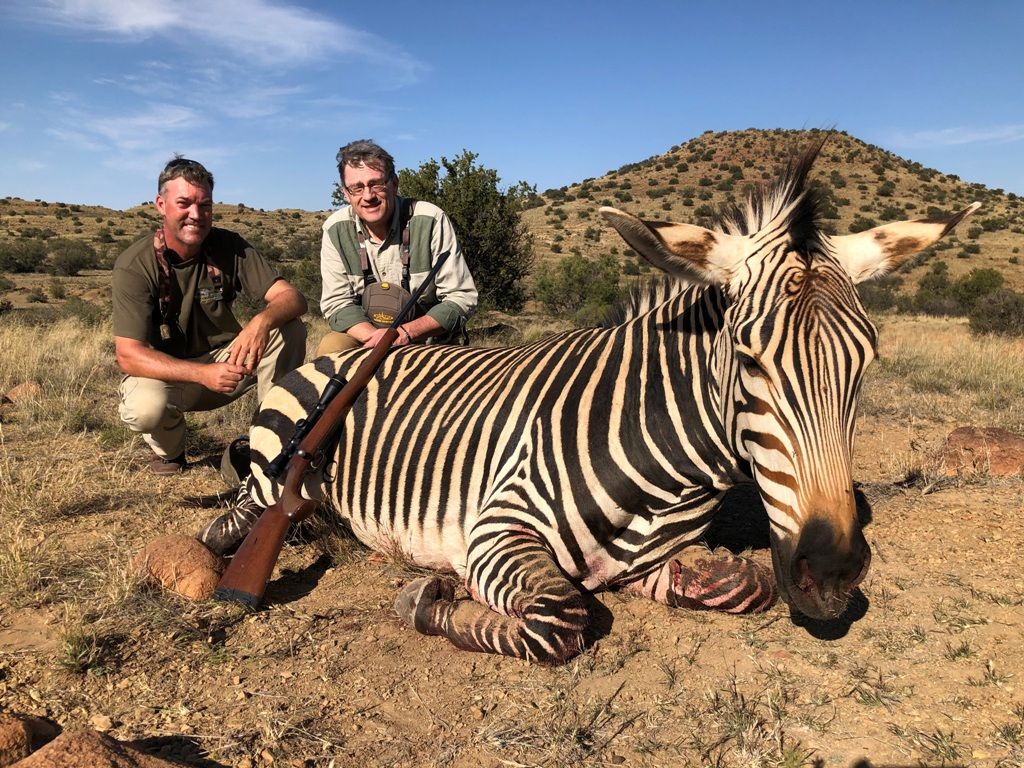 We spent the next day in Graaff Reinet visiting the Valley of Desolation and relaxing with drinks at our cottage in Graaff Reinet. That evening we met up for drinks and dinner with Lindsay, our kids Emma and Harry, Nibbs and girlfriend Sarah at Coldstream Restaurant. It was a fun evening with lots of laughter. 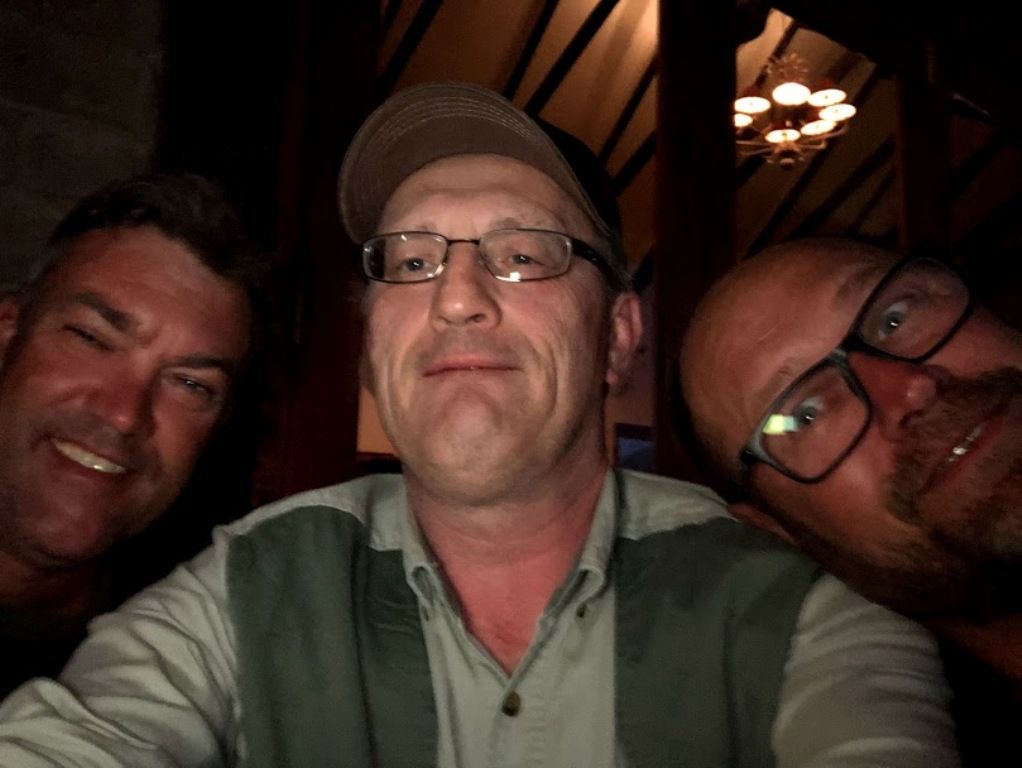 Early the next morning we headed to a concession for two days to hunt eland. The weather had turned foul overnight, the wind was howling and the hunting was tough. Nevertheless, we enjoyed our day and had close encounters with a herd of elephant and several rhino and buffalo. At first light we spotted seven eland walking up a slope to take shelter from the strong northerly wind below a koppie. We snuck up on the back side of the koppie and got a good view of them from above. We hid in the shadows of a "num-num" bush and the eland couldn't see us directly above them. The herd bull was big, dark and had a hanging dewlap and tuft of dark hair between his eyes. He was facing us with his head down. Minutes seemed like hours as we waited patiently. When he shifted, Keith was ready and his shot him in the spine putting him down on the spot. The next shot was on the money and found the vital area behind the shoulder. What a remarkable hunt and trophy. Keith had some unfinished eland hunting business from 2016 and we joined in on the happy dance celebrations. 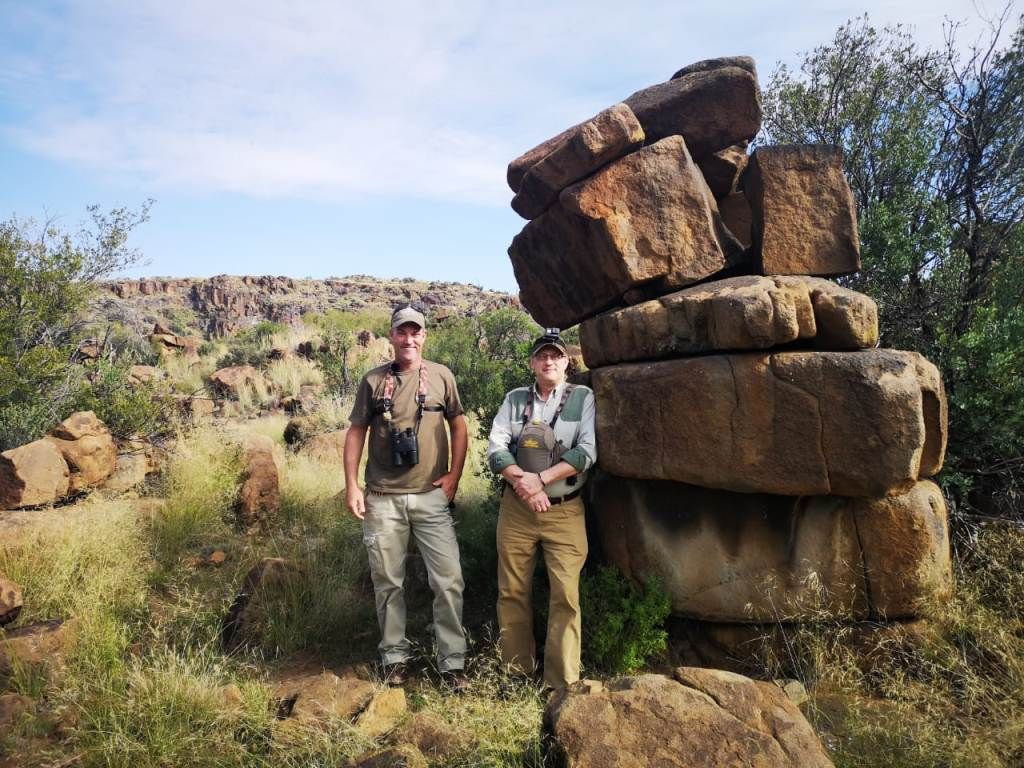 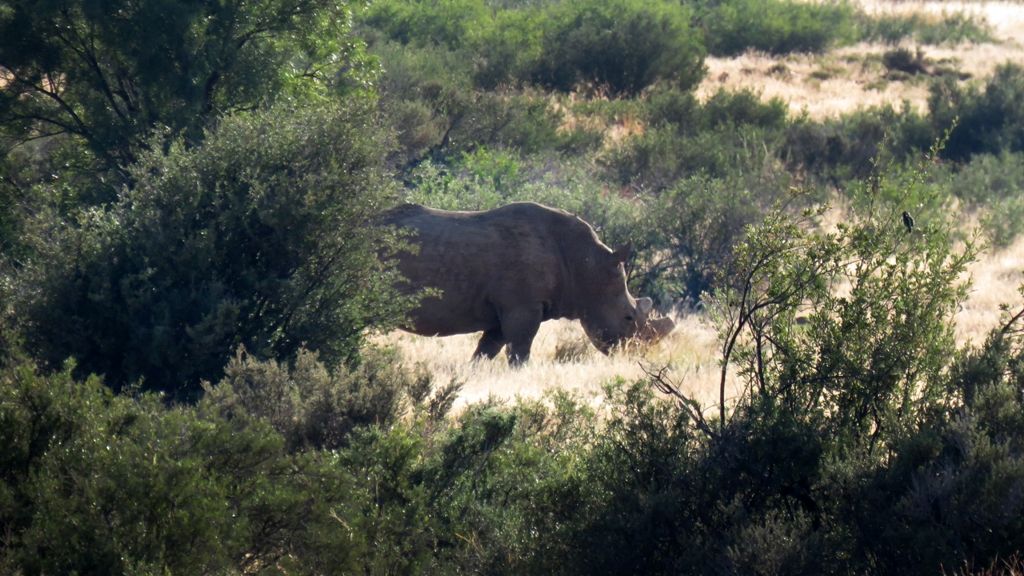 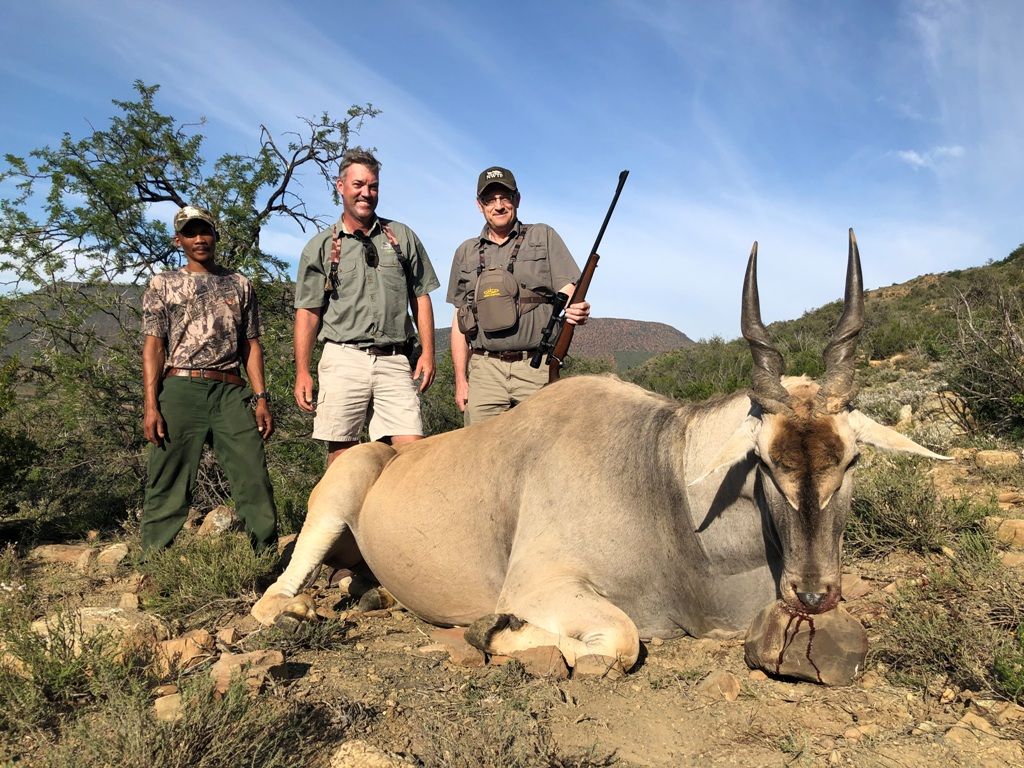 More hunting success came our way that afternoon as we snuck stealthily in on a lechwe bull. Another well placed shot later Keith had taken a great trophy. We met up with Lindsay and the kids at the lodge and had went on a late afternoon drive ending with sundowners at a dam. It doesn't get better than this for me. Amongst the thrill of hunting Africa's species are special quiet moments like these, spent with friends and family. 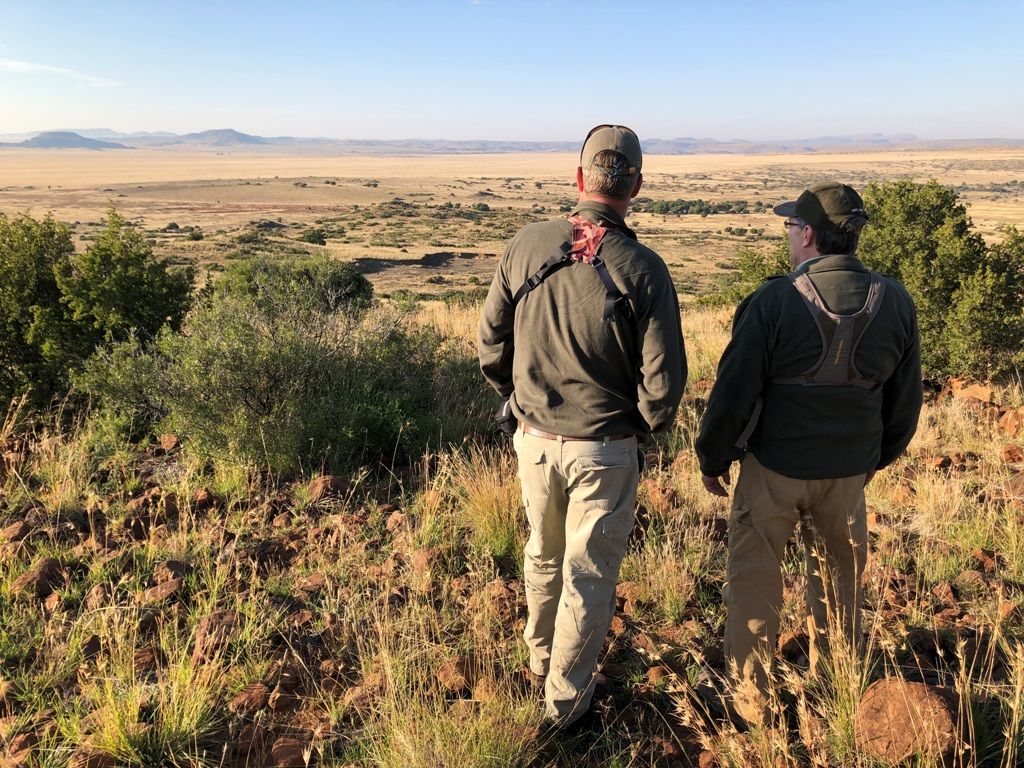 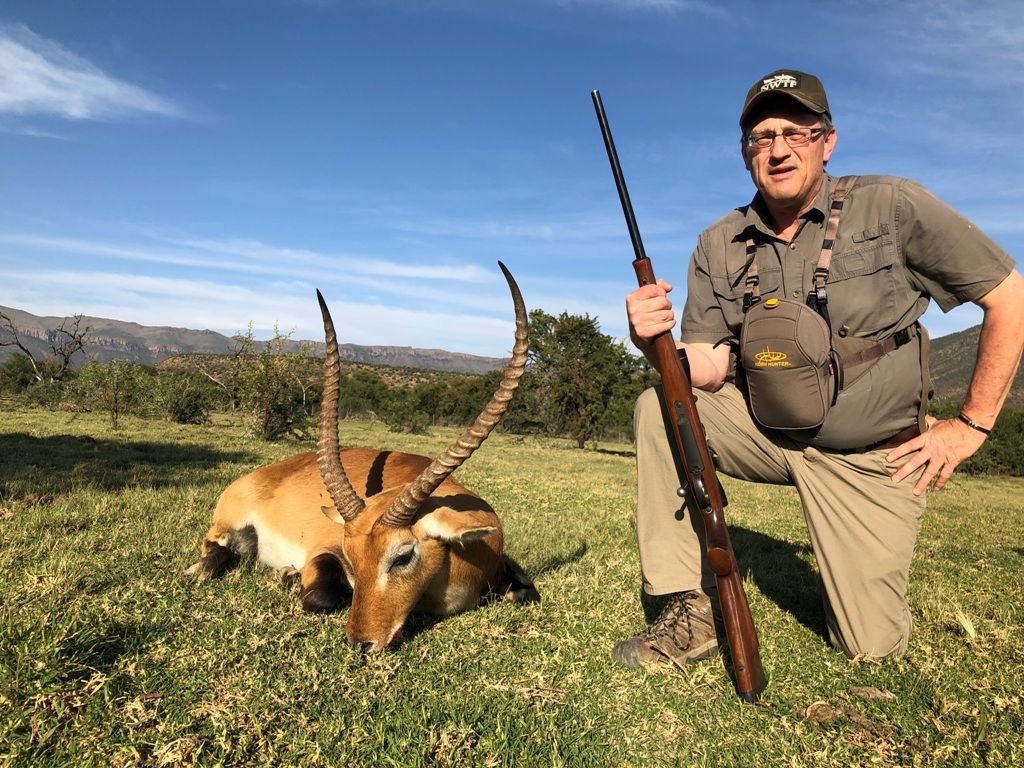 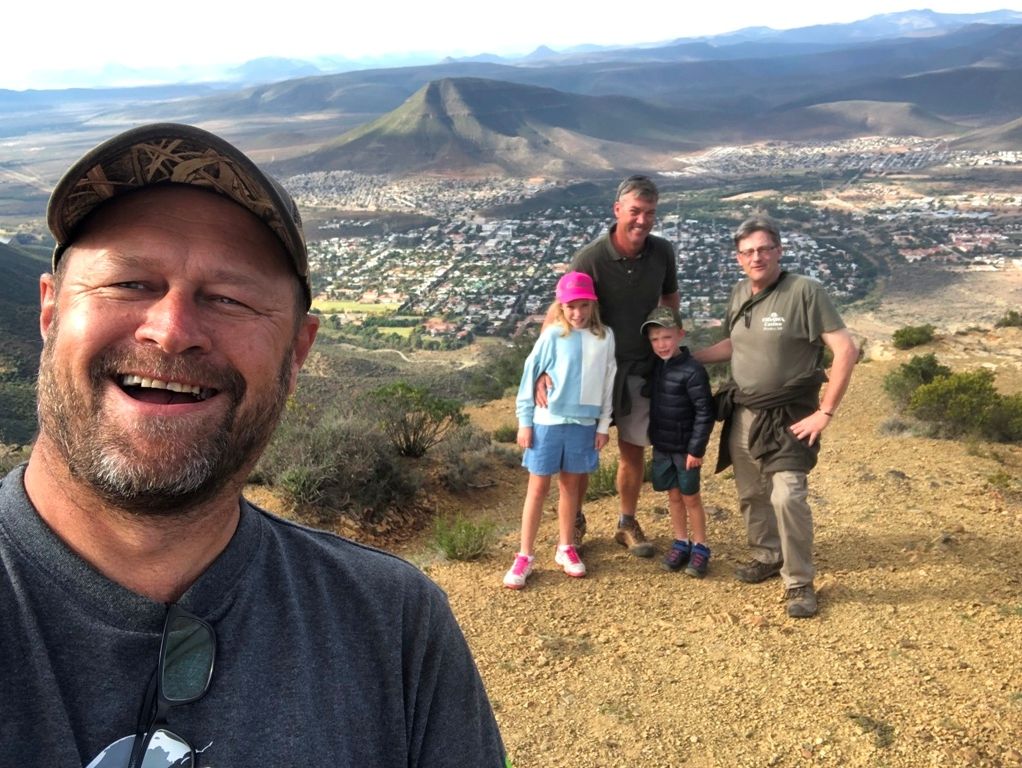 The next few days were spent at Karoo Wild Lodge. We had the fastest bushbuck hunt in Karoo Wild history, surprising an old bushbuck ram languishing in the sun on the edge of some bush. He was lying down but Keith's shot found the mark and he had completed his spiral slam. We visited Relive Africa's Taxidermy Studio where Keith had the opportunity to meet Paul and see his work. 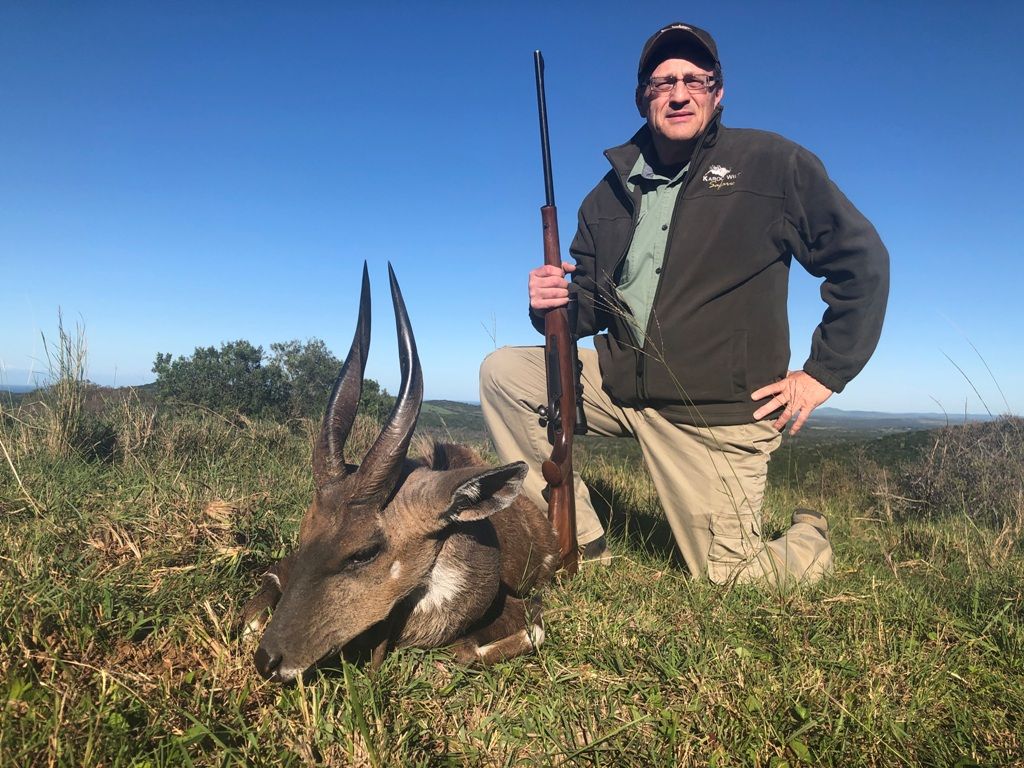 The last afternoon was spent driving around our property. It was the start of the mating season and a remarkable amount of large kudu bulls had emerged into the open. It was a warm wind still afternoon and pleasing to see that amount if animals. 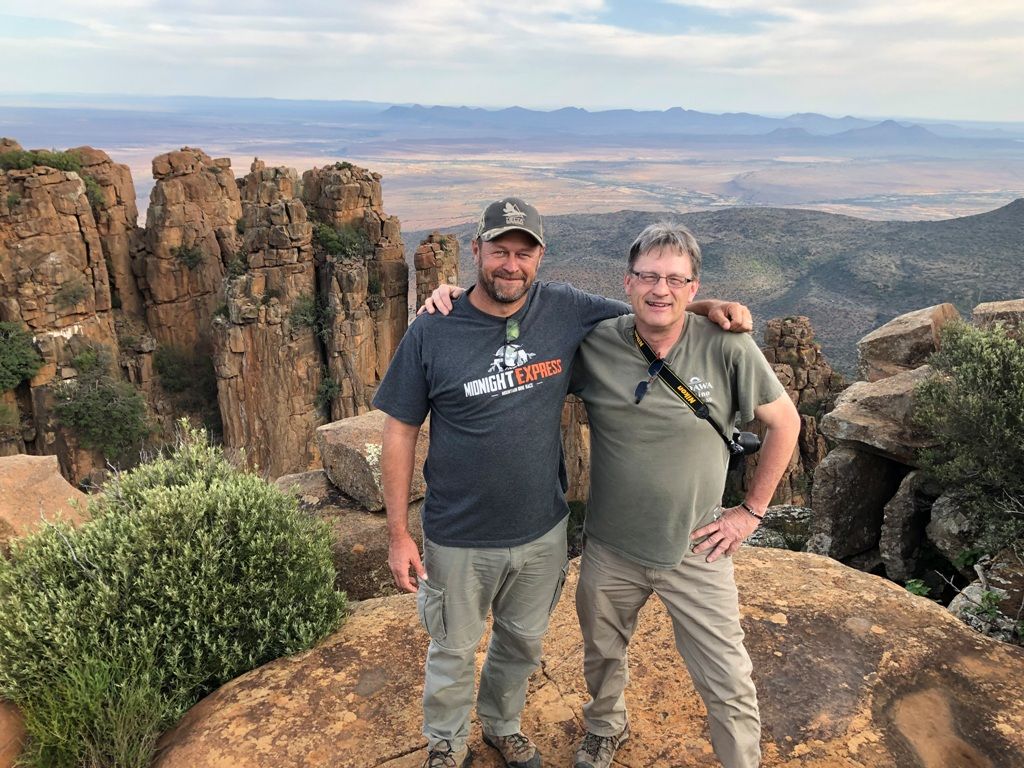 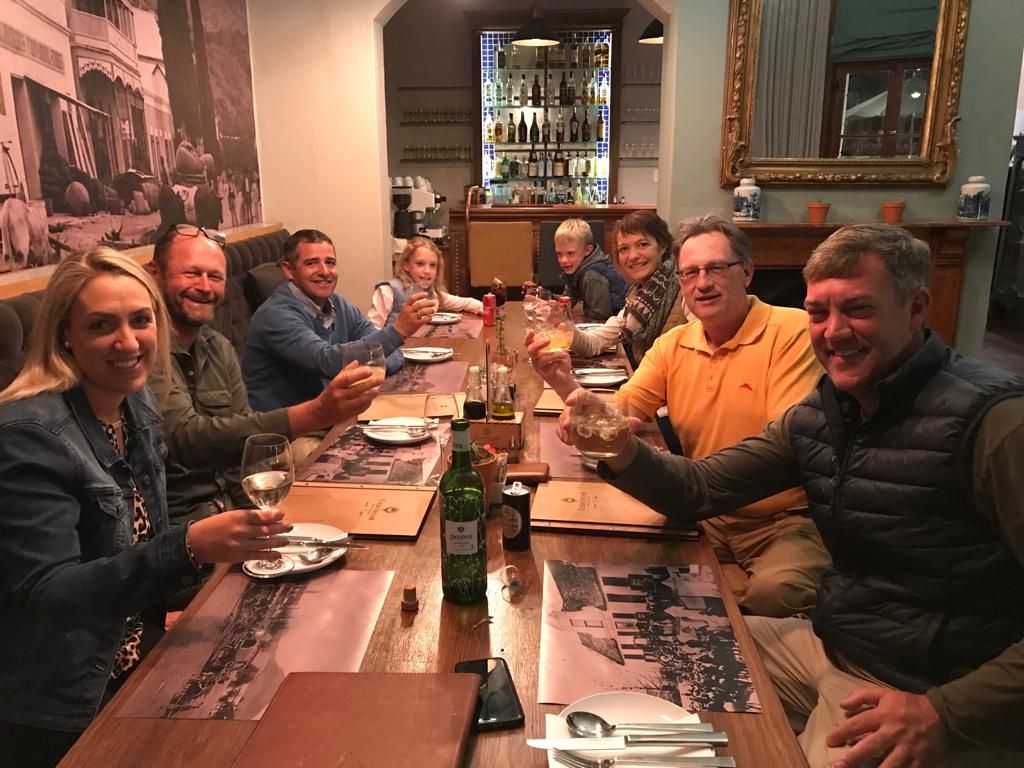 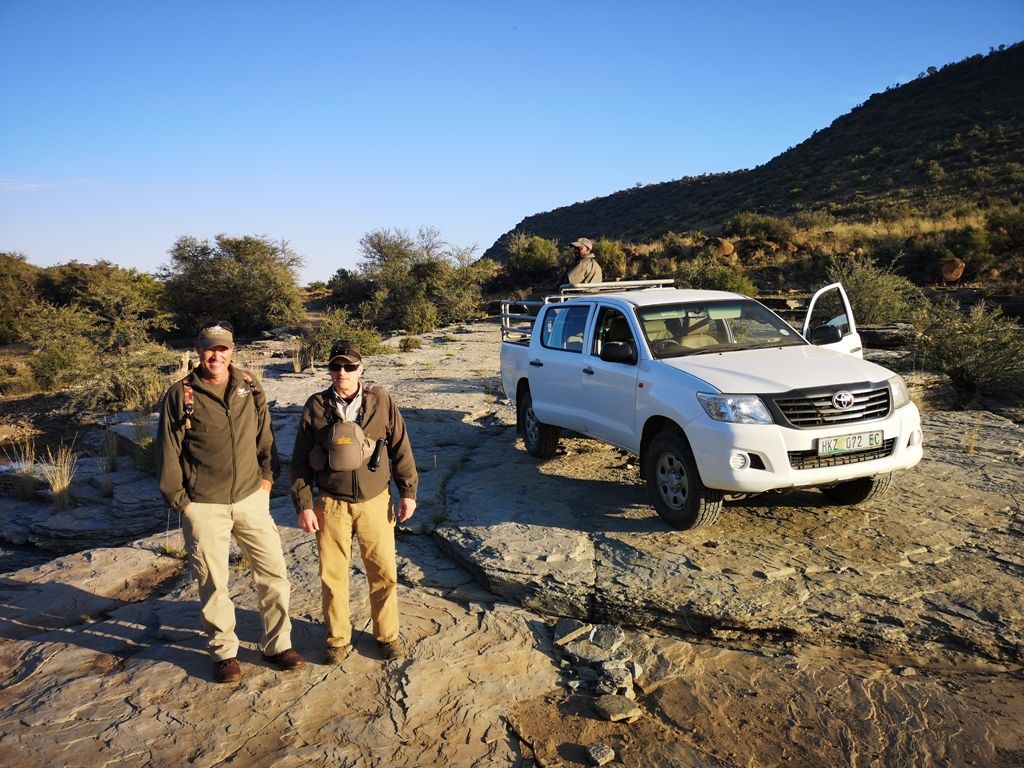 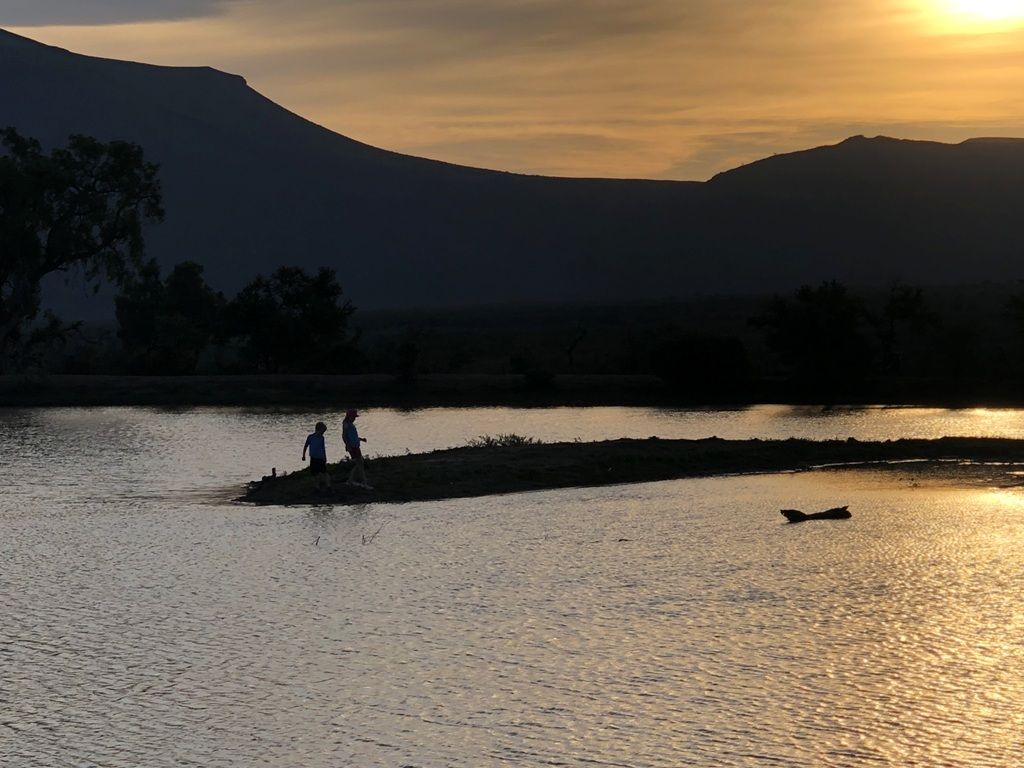 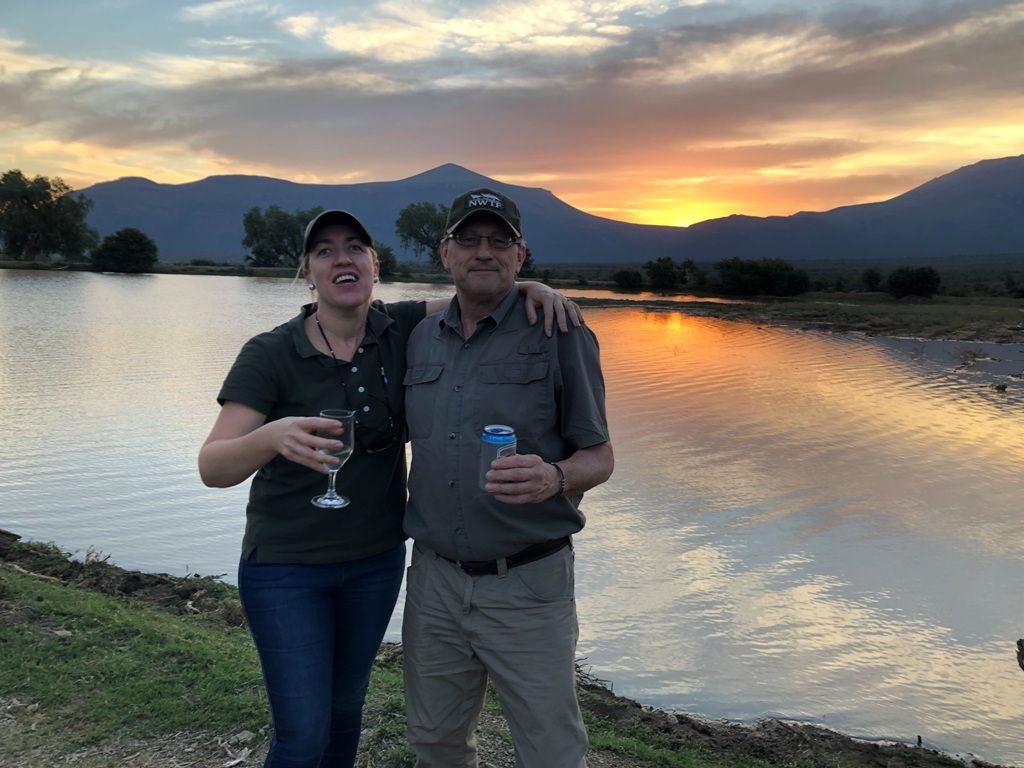 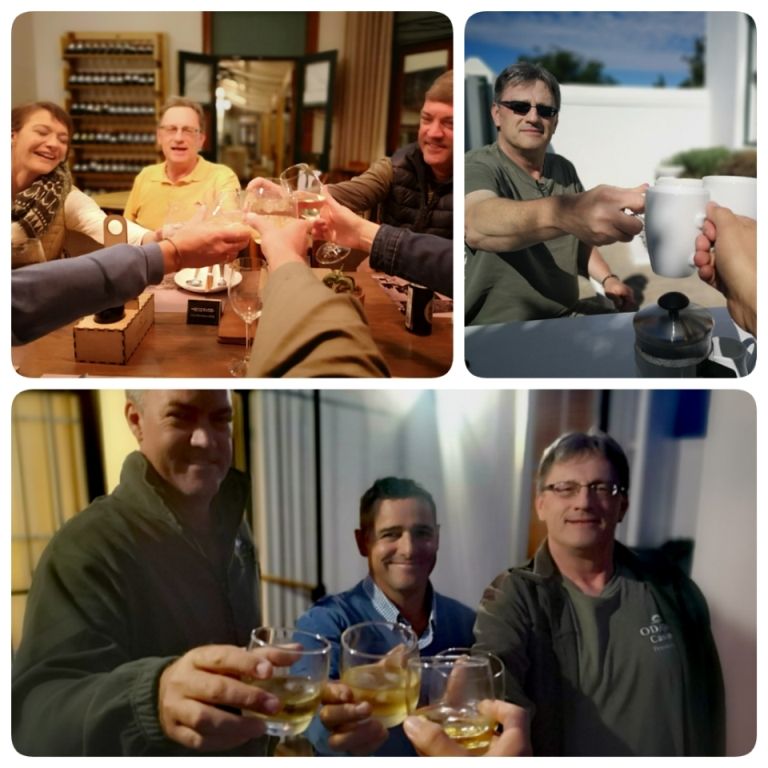 Keith flew out to Cape Town the next day and onto Victoria Falls and the Chobe region for some sight seeing. It was terrific spending time with our friend again. Good times like these, make me appreciate even more the life and moments we have the privilege of experiencing.

Congrats to the hunter and thanks for sharing!
John 3:16

Another great report! Thank you.

The highs and lows of hunting. Thanks for the report Victor. Still looks nice and green at your place.

Great hunt, thanks for sharing. That is beautiful country.
"There is nothing so good for the inside of a man as the outside of a horse."- Winston Churchill

Been a few years since I’ve hunted with Karoo. But family and I had an amazing time for our first Africa trip!!
V

Exciting scenes from our hunt with Keith in May 2019

Congrats and well done.
Tommorow is promised to no one. Go live your dreams.
You must log in or register to reply here.