We were privileged to welcome Hadrian and Barbara from Austria to South Africa on their first plains game safari to Africa. Austria has a strong hunting tradition and we hoped that Hadrian and Barbara would have an excellent hunt with us in the Karoo. We set out initially to hunt a few cull/management animals and once they were acclimatised to the local conditions, to then focus on hunting some good trophies. They hunted with my Sako .270 Winchester using 130gr Pro Am rounds.

Early on the first morning we hiked from near the camp and stalked a large herd of impala ewes. It was the beginning of the impala mating season and the herd was distracted by the continous jostling and fighting of several rams on the edge of the herd. Hadrian made a long shot to shoot his first African animal, a cull impala ewe. Barbara soon had her opportunity when we came across a bachelor herd of black wildebeest. One of the bulls was having trouble with his one leg and we decided to remove him from the herd. After a short stalk and patient wait for him to turn broadside, Barbara made a good shot to take her first animal. Later that afternoon, Hadrian shot a cull female kudu. The shot found it's mark on the shoulder and she crashed into the heavy bush as she expired. 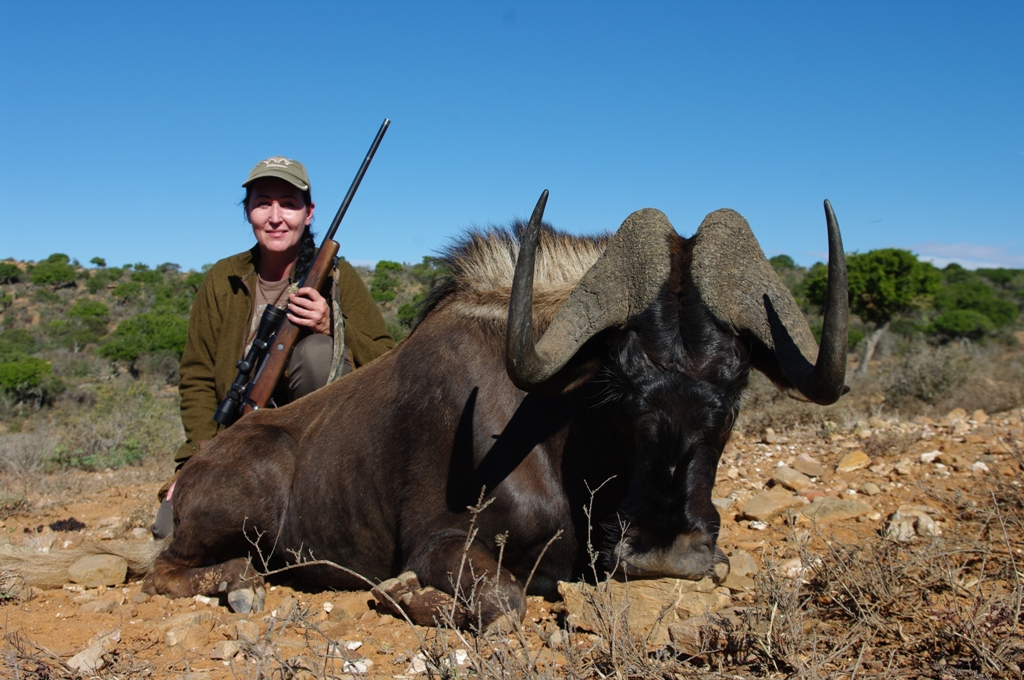 The next morning we made a long uphill stalk on some blesbok before Barbara had an opportunity to shoot. The shot was a little far back and she soon followed it up with a second shot. She had a magnificent blesbok ram. Much later that afternoon we hiked along a dry riverbed for several kilometres before we came within a hundred metres of a herd of springbok. We set up and waited patiently for our chance. The first shot hit low but they only ran a short way off before Hadrian's second shot hit and he'd taken his springbok, a ram whose horns flared back beautifully. 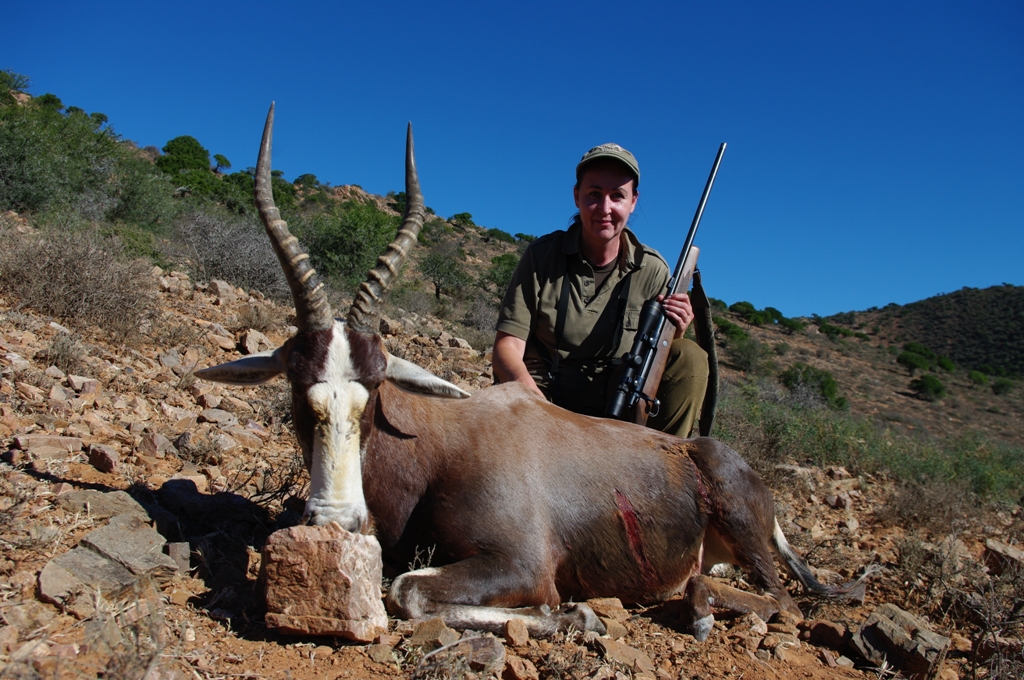 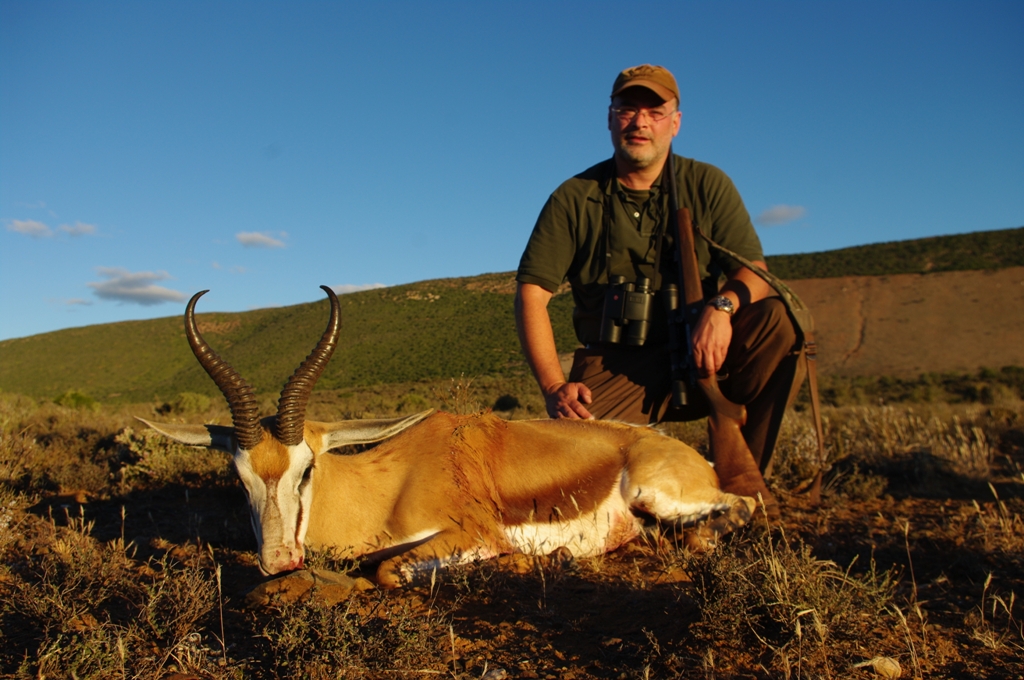 We were driving up a valley the next morning when we stumbled across a herd of impala in the most unlikely of places. Hadrian set up to take a 220 metre uphill shot and dropped the dominant ram in his tracks as he paused to scan the valley below him. That afternoon Barbara hunted a springbok ram. 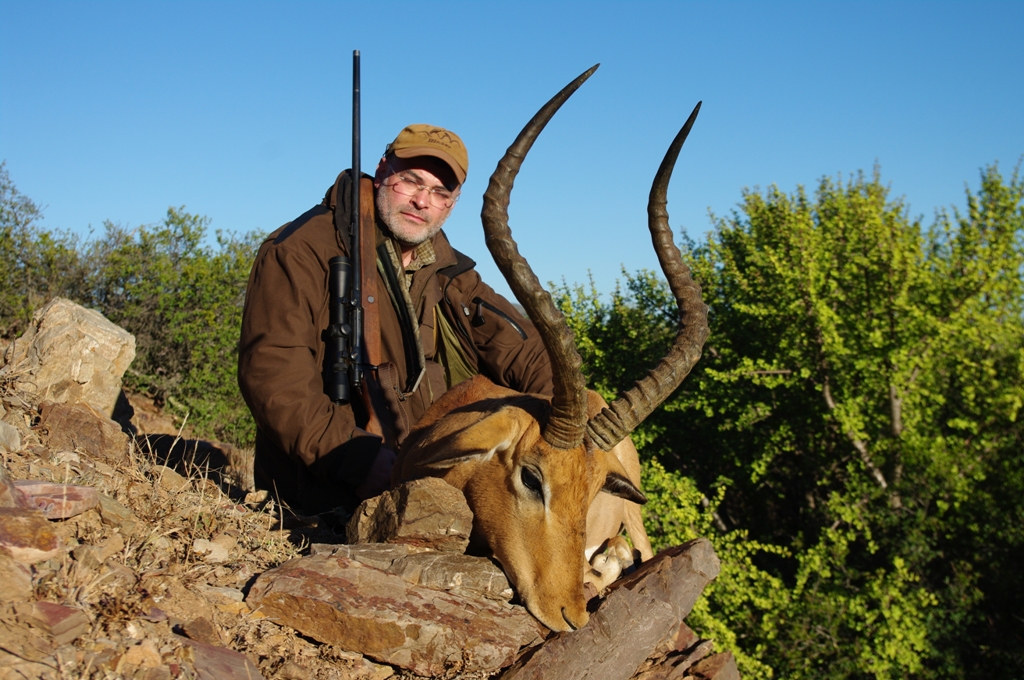 The next morning found us watching a big kudu bull and his cows as they walked across some open bush towards us. The bull paused mometarily and we had the briefest of opportunities. Barbara's shot missed. The disappointment of missing a big kudu opportunity always lingers for awhile after but were hopeful we would get a chance at redemption. On the way back for lunch Barbara shot a cull common duiker. A duiker is a small animal but the belief in the rifle and her shooting ability started building again from that point.

We searched for kudu that afternoon and through the next morning with no real shot opportunities. The trials and tribulations of cape kudu hunting can be an emotional affair. From the high of stalking a big kudu to the lows of a lost opportunity or missed shot, it is a hunt that can fray your emotions and test your faith. Barabara, Hadrian and I still believed and that afternoon we were sitting below a mountain waiting for kudu to graze into the open ground in front of us. It was almost twilight and I decided to do one last scan with the binoculars before leaving when I saw him...a big kudu bull leading his herd in our direction. He was 300 yards out, the light was fading fast and we waited agonizing minutes that seemed like ages for him to cover the ground between us. We could wait no longer and when he turned broadside Barbara shot him. He stumbled into some acacia thicket and we quickly followed him giving him a second shot for good measure. He was a magnificent cape kudu bull with a swollen, black neck and beautifully shaped horns. What a hunt and trophy! 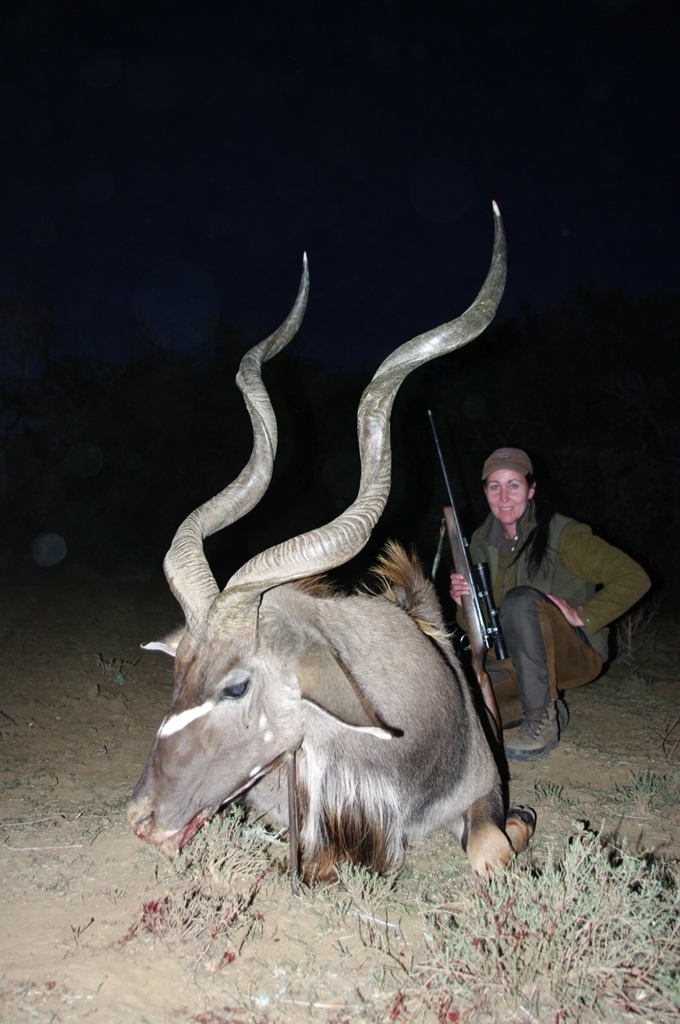 Hadrian had decided he wanted to take a burchells zebra and we searched for them that morning. When we eventually located a small herd of eight they were already aware of us and were on the run. We followed them waiting for a chance when they stopped briefly and Hadrian acted quicking putting one down with a high shoulder shot. 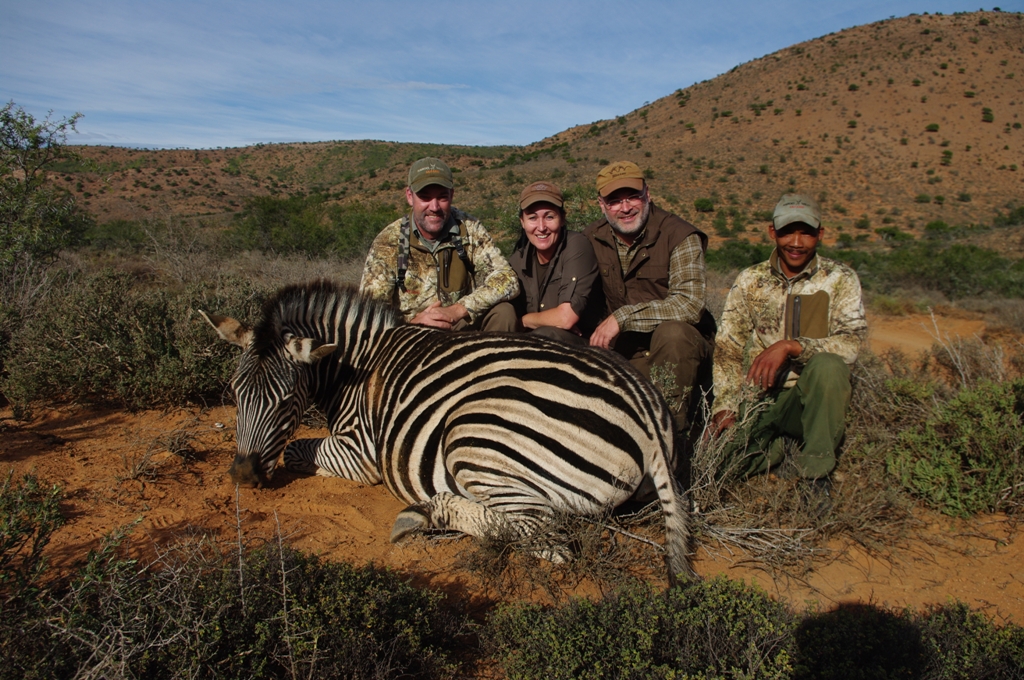 It was a hunt to remember. A hunt full of different hunting opportunities, challenges and hunting emotion. We said good bye to our new friends and hope to welcome them back to the Karoo next year for a new adventure.

Victor,
Glad the hunts are going great!
See you in a couple months..

Congrats to the hunters, great animals.

Congrats to the hunters they harvested some nice trophies!

Very nice Black Wildebeest! I really like those horns! All nice trophies.
Africa on my mind.

Congrats to the hunters!
John 3:16

Very nice Victor, sounds like you have infected more hunters with "The African Disease"
You must log in or register to reply here.