After greatly enjoying two previous trips to Induna Safaris, I decided to travel and hunt with my son, arriving March 16, 2020, after spending a week in South Africa, including at Addo Elephant Park and hunting with Tams Safaris. It was perilous travel; dodging COVID-19 at each airport but arriving healthy and unscathed!

Induna Safaris is located in the Eastern Cape of RSA, about 1.5 hours from Port Elizabeth and near the small community of Kleinpoort. It’s an operation with a very large tract of huntable farmland that includes some savannah, and hills with bushveld. It is a very short drive to be right in the hunting zone and Induna has access to a number of other nearby concessions which offer animals of trophy quality of which may not be on the Induna property (such as Common reedbuck and Blesbok). Induna has the most number of Cape Kudu that I have ever seen or will likely see on any property and appreciable numbers of high trophy quality Impala, Nyala, colour phases of Springbok, Steenbok and Common duiker; relatively less but huntable numbers of Burchell zebra, Blue wildebeest, Warthog and Red hartebeest; and, a few Cape buffalo (recent addition to the farm). In close concessions to Induna are most other Plains Games animals that are typically offered in RSA.
https://www.indunasafaris.com/ 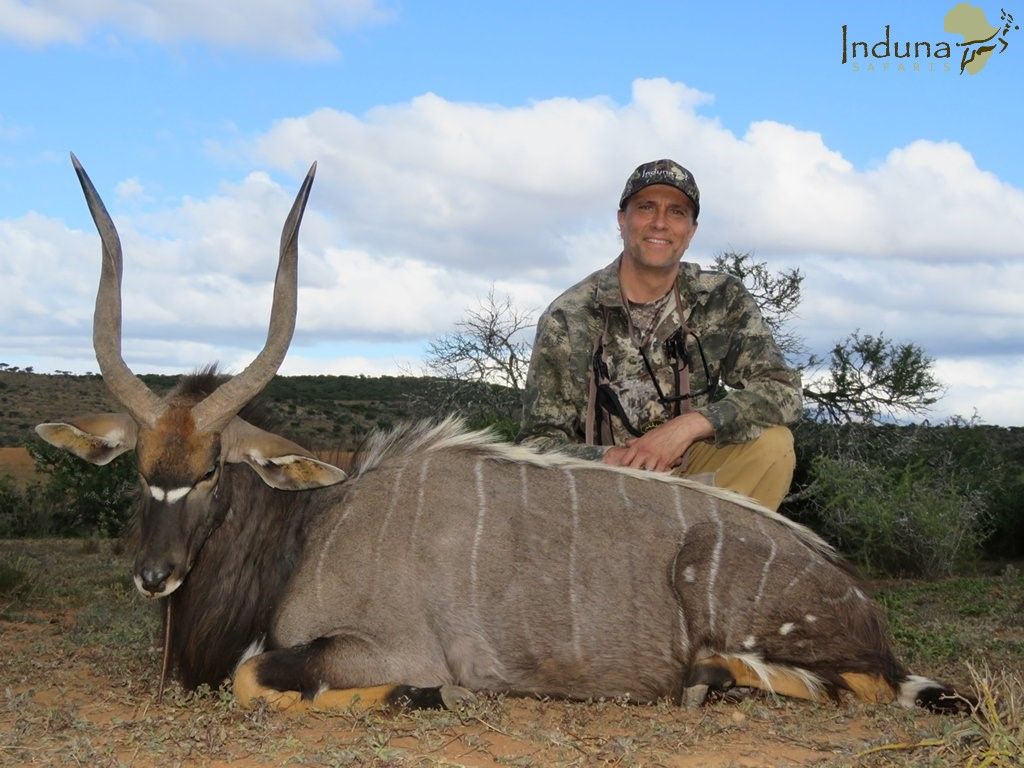 Kelvin Milsom the PH, along with his wife, Denise, own and run the family-owned business. The accommodations are very good and a person stays at the ranch house with the family. The room I stayed in is quite comfortable and the home cooked meals fantastic. Recent (March 2020) rains had really “greened up” the area and with good grass growth for the ranch. My wife joined me in July 2019, in our 6 week African adventure over 5 countries. One of her highlights that she really enjoyed was at Induna and being with Denise in some non-hunting related activities such as visiting Addo Elephant Park, Daniell Cheetah Breeding project and shopping in Port Elizabeth. My son joined me in March 2020, and has now a lifetime of great memories. He was able to get a trophy Warthog and Impala. Kelvin and Denise are wonderful people and after being there three times now, including once each with my wife and son, we can definitely call them our friends. 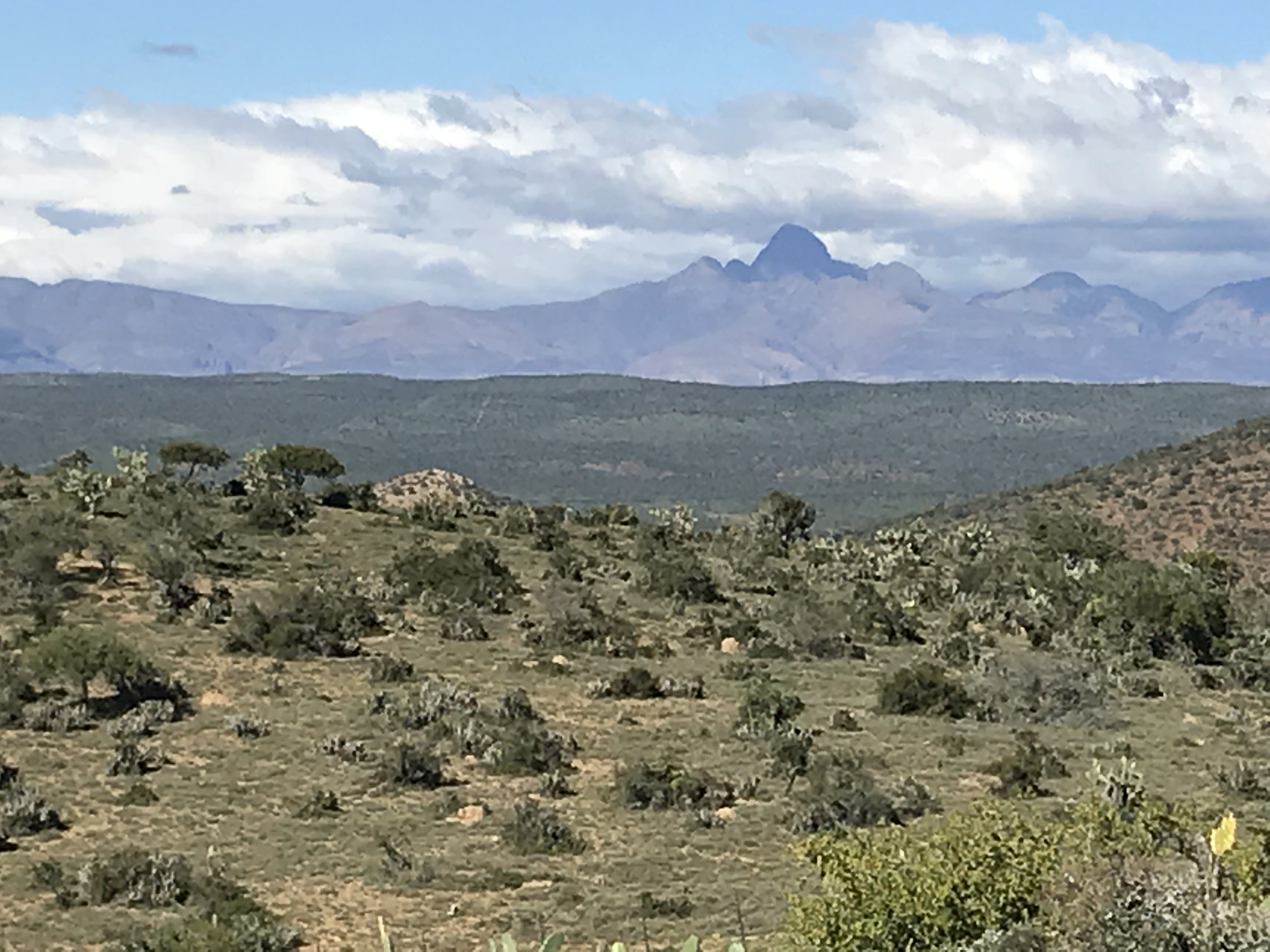 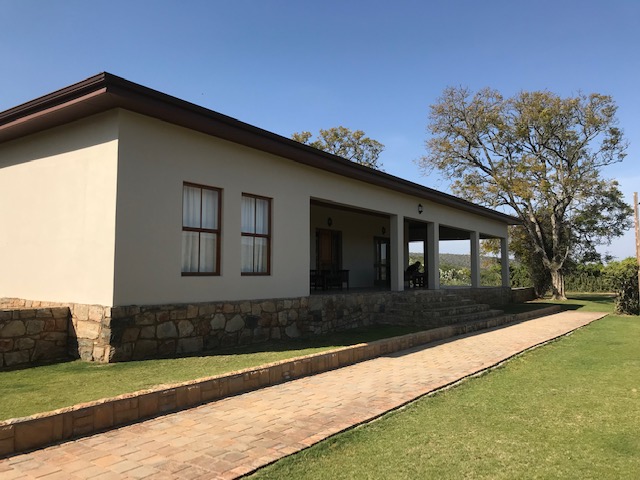 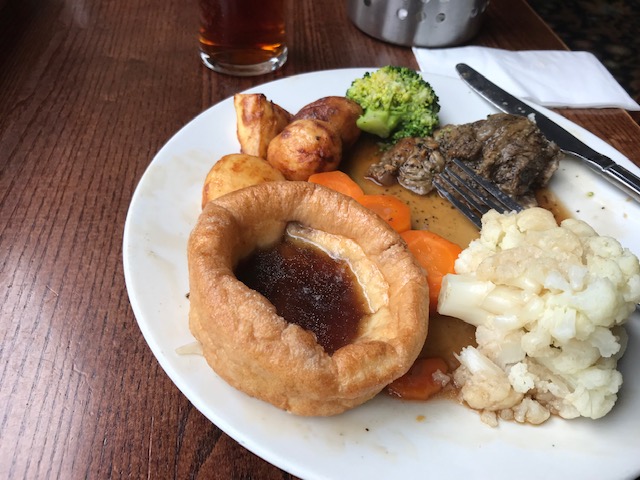 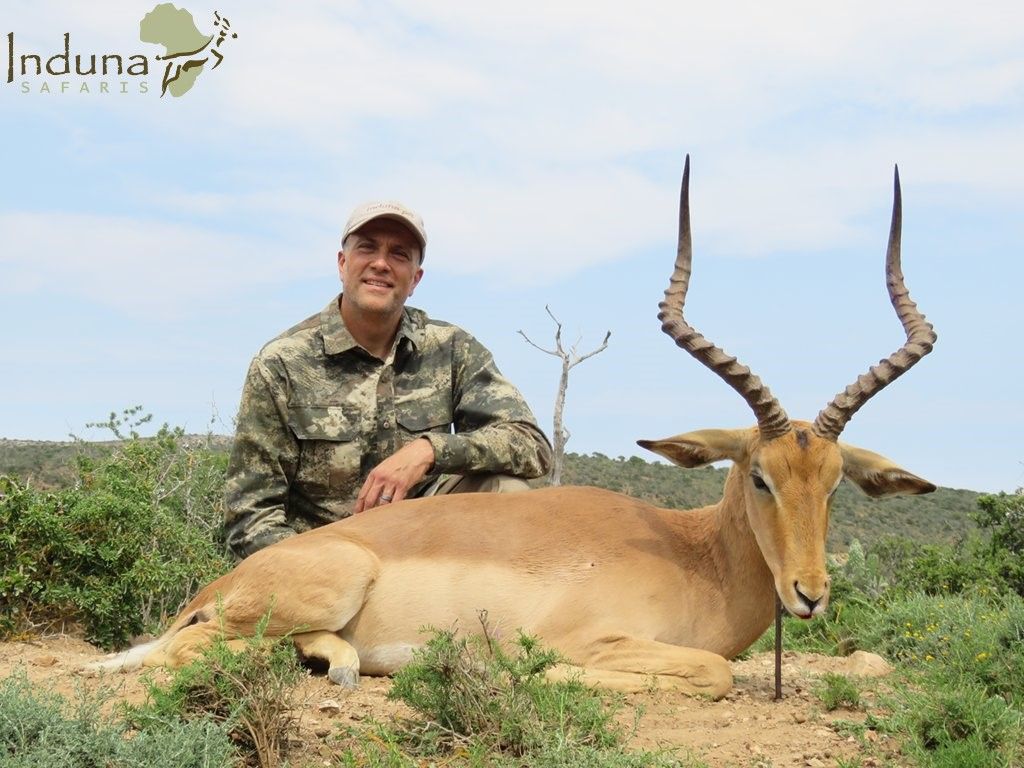 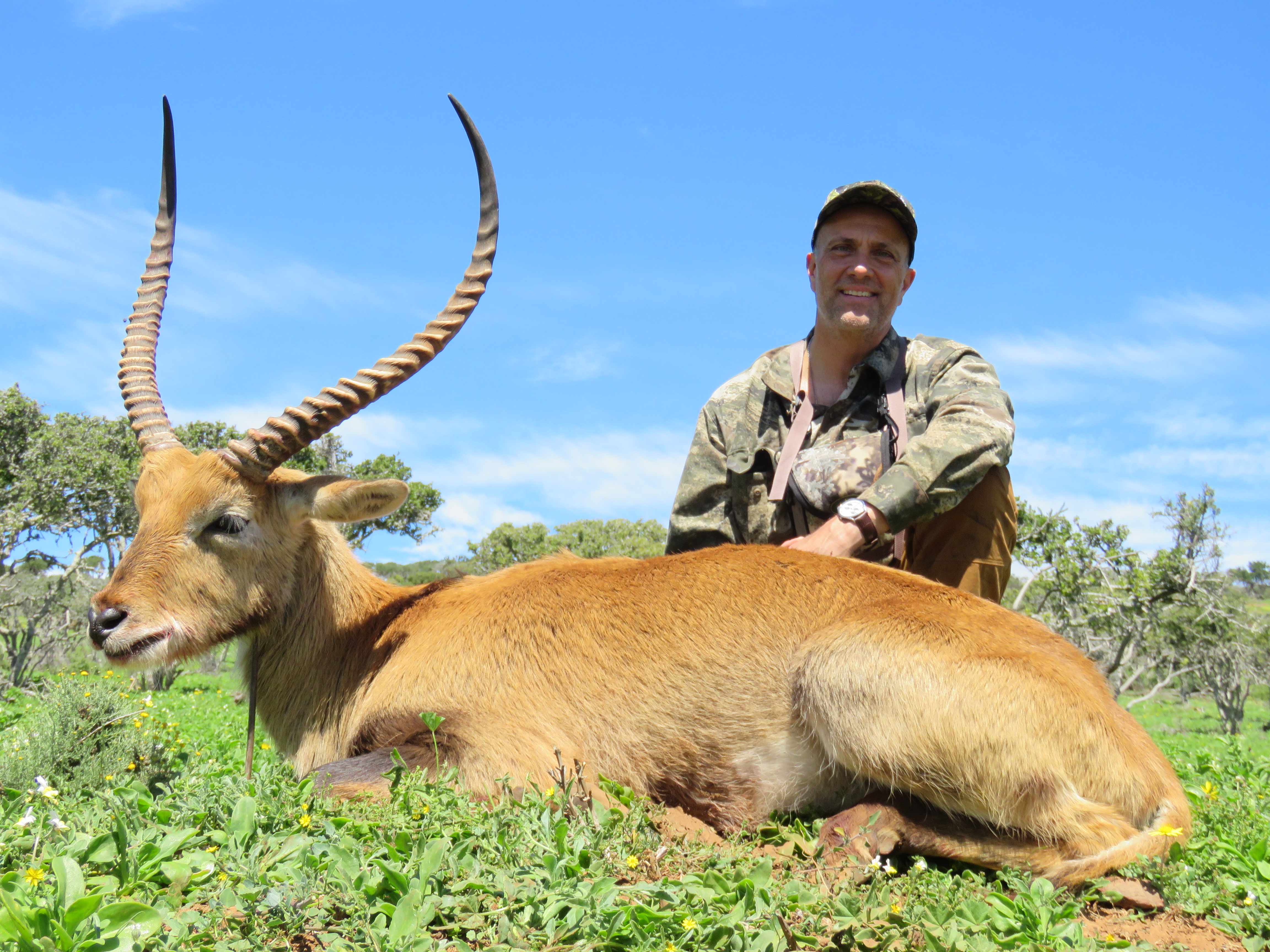 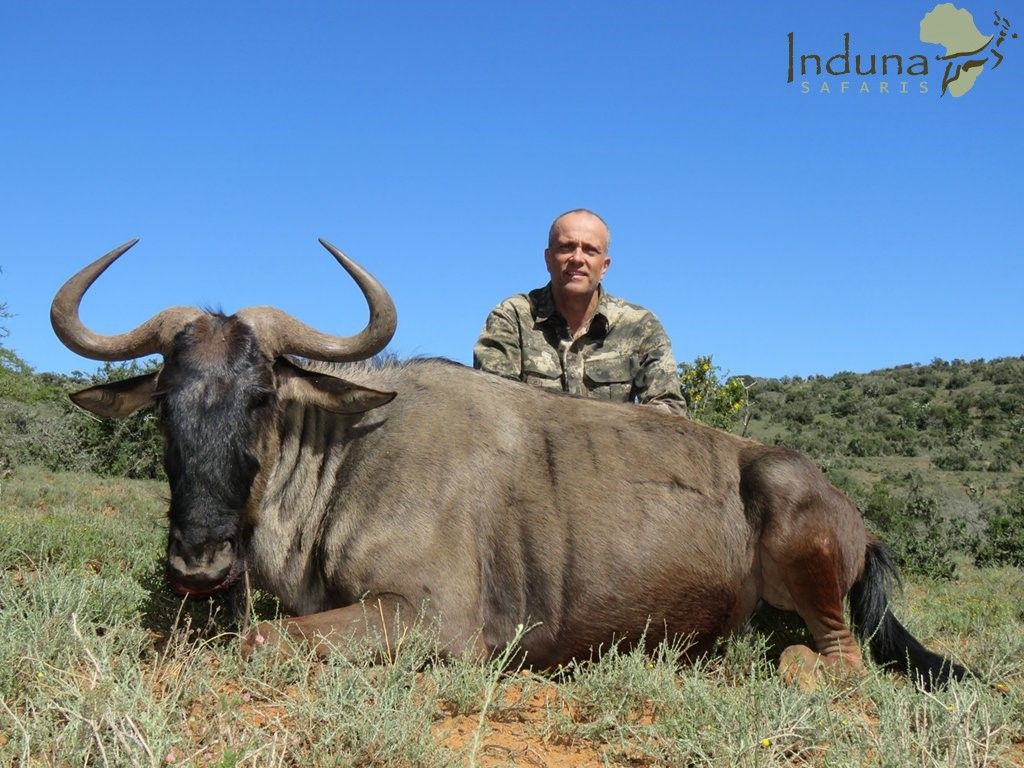 What attracted me to Induna Safaris initially in 2018, was the great price for Red lechwe as well as other plains game and with the opportunity to get to a new area, the Eastern Cape of RSA. It stands to reason why I keep coming back: great company; good times; excellent hospitality and great memories. Induna keeps a hunter’s blog on the website and it seems that I am not the only returning client. The blog offers an opportunity to review other hunters' experiences vicariously which improves the hunting expectations and fore-knowledge. For Kelvin, it’s all about the stalk! He really puts the effort in to spotting quality animals at a distance and along with his tracker, Alton, plan the stalk. For the trophies, there is no simple hop off the vehicle and shoot – the terrain is generally rugged or covered in bushveld. The most memorable stalks I've had in my African hunting experiences were all at Induna and included the Impala, Waterbuck, Warthog, Nyala, Mountain reedbuck and most recently, the ancient “blue” Eland, encountered while looking for Zebra. 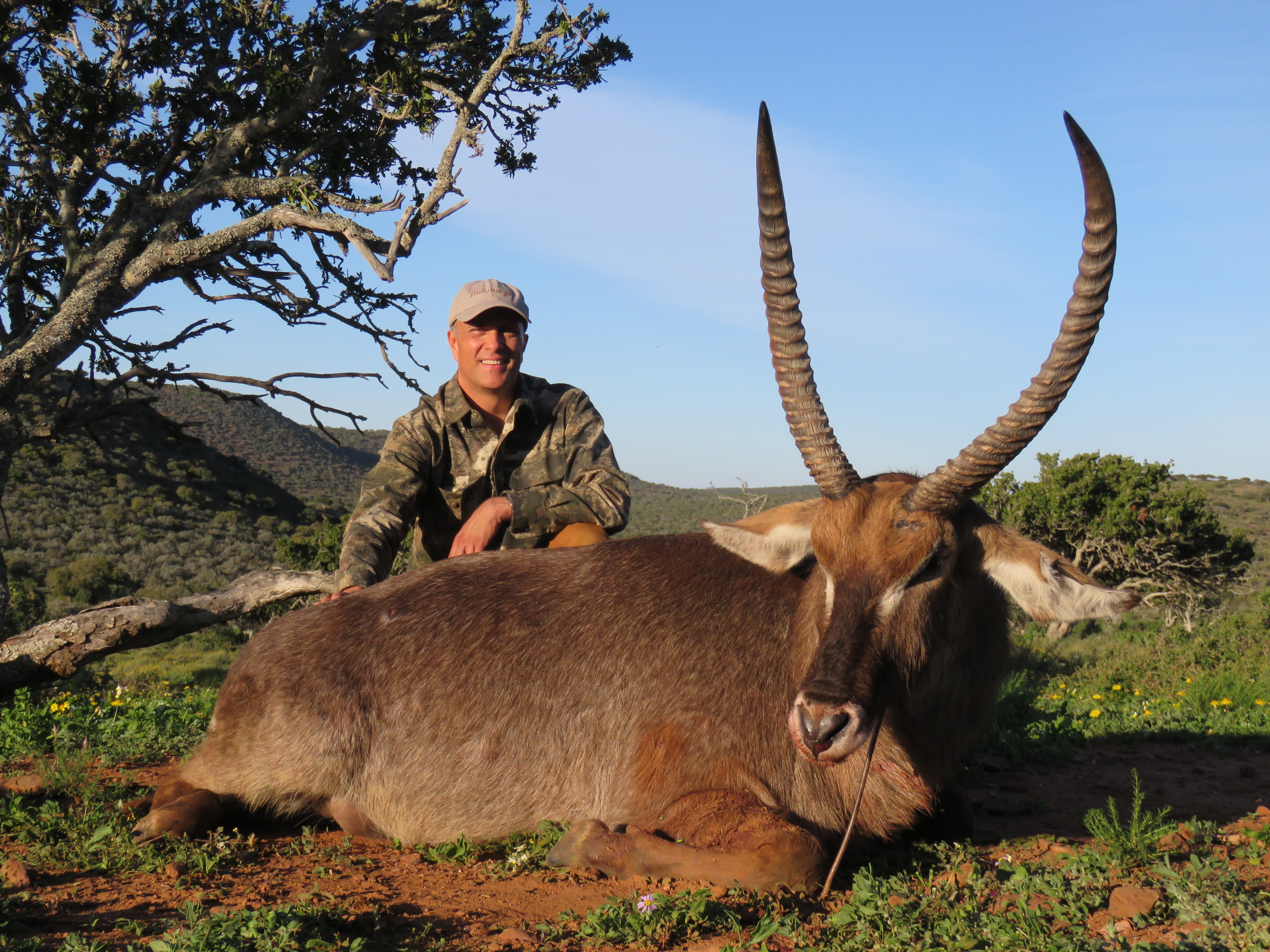 In this March 2020 trip, we had headed to a nearby hilly area looking for Zebra and saw a herd heading up a steep 4x4 road, eventually reaching the top and then up and over. The plan was then set to travel back around and see if they could be spotted on the North side of the hills. It was late morning, and the Zebra could not be seen but a herd of Eland was observed, along with Red Hartebeest and other animals. They were left bedded down for a return in the late afternoon at which time they were spotted on the hillside, along with the Zebra herd and cast of dozens of other animals with many pairs of eyes! The plan involved crouching, duck walking and crawling - slowly moving along a wash towards the Eland over a distance of about a kilometer; the new target and a large Eland bull, aptly named “Egrand.” Initially the Eland were about 250 m away and a final move put them at about 150 m. It was very surprising that we made it undetected but it's sometimes better to be lucky than good! Further to our amazement, most of the animals moved towards us and we had to keep perfectly still as Eland, Zebra and Red Hartebeest were within 20 to 50 m. Minutes before the end of shooting light and what seemed an agonizing eternity, Egrand moved out from behind a tree and presented a frontal shot at 70 m. The borrowed 375 H&H, 300 grain soft point did its work and the Eland dropped within 100 m…then the real work loading began! 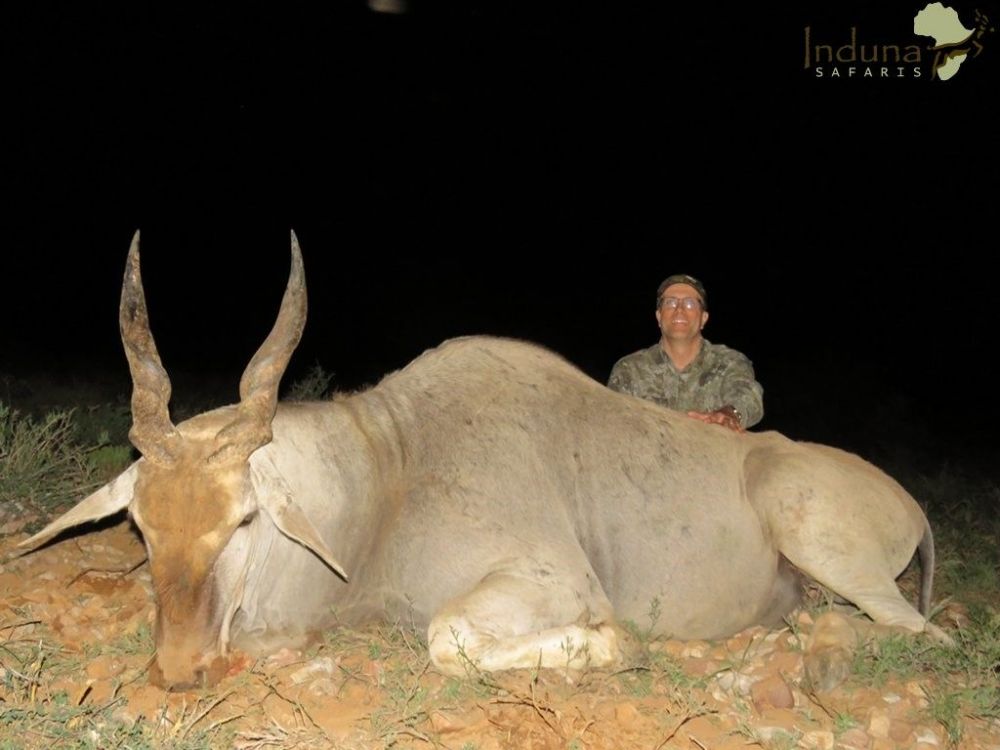 I can’t help but recommend Induna Safaris to the utmost! Have a look at the Main page hunting reports including my own for the three trips, and the pricing to make the decision for yourself (https://www.indunasafaris.com/ ). While I’m maxing out on room for available trophies and once COVID-19 is managed, I still have trips already booked, but now deferred, to Tanzania, RSA and Mozambique for Cape buffalo, Gazelles , Fallow deer and Crocodile. I do plan to go back several times over the next few years to Induna to try out bow hunting/cull management hunting. Induna will always be the mainstay of whatever African hunting adventures I have remaining in the future - even after nailing that blue-balled, Damn monkey I've been trying to get for three years now! 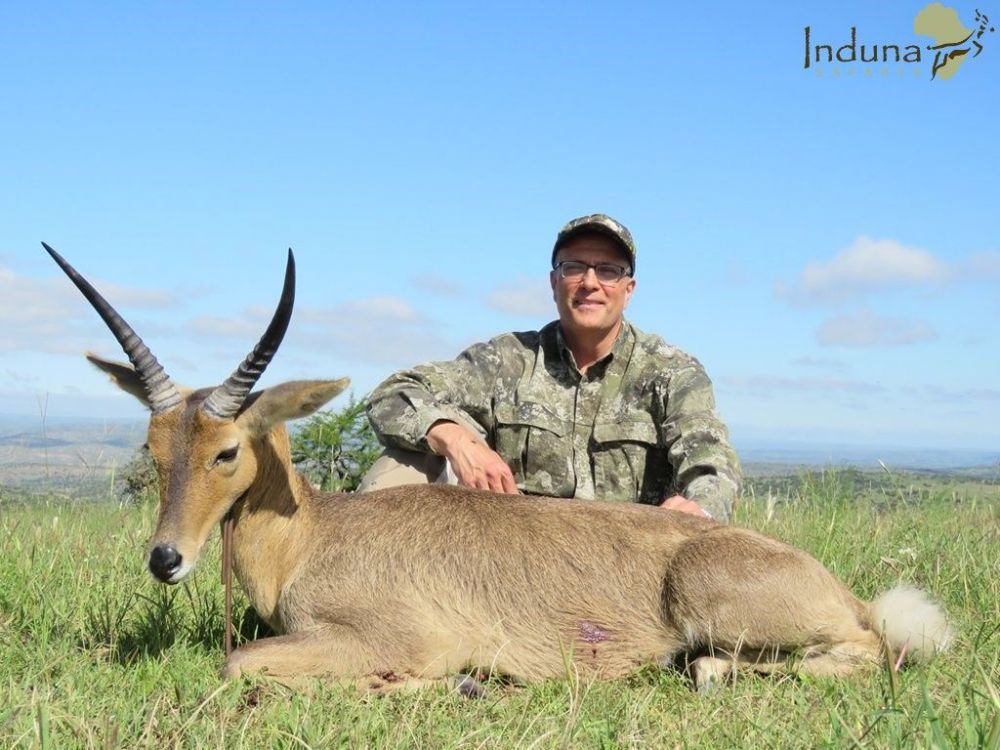 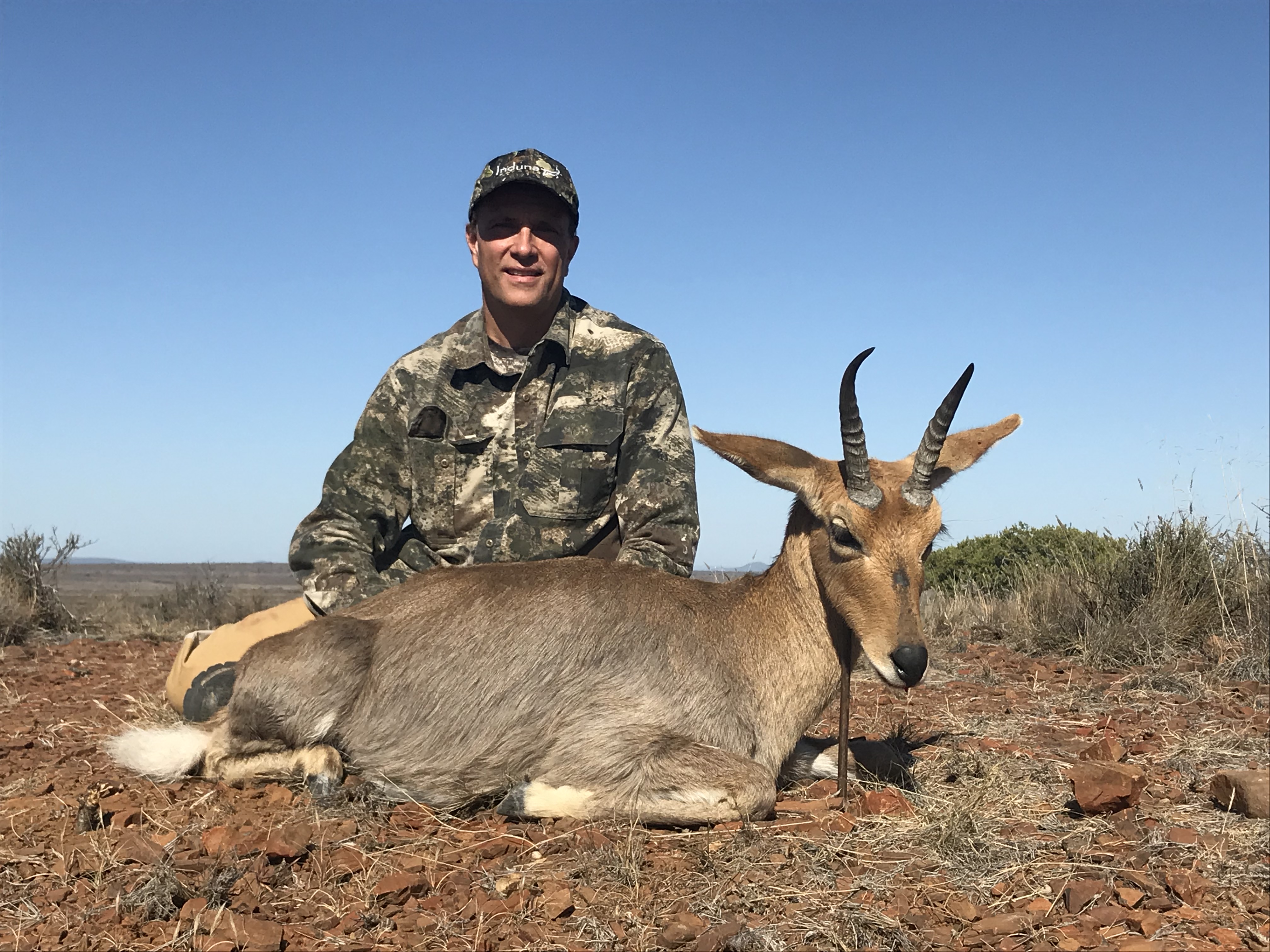 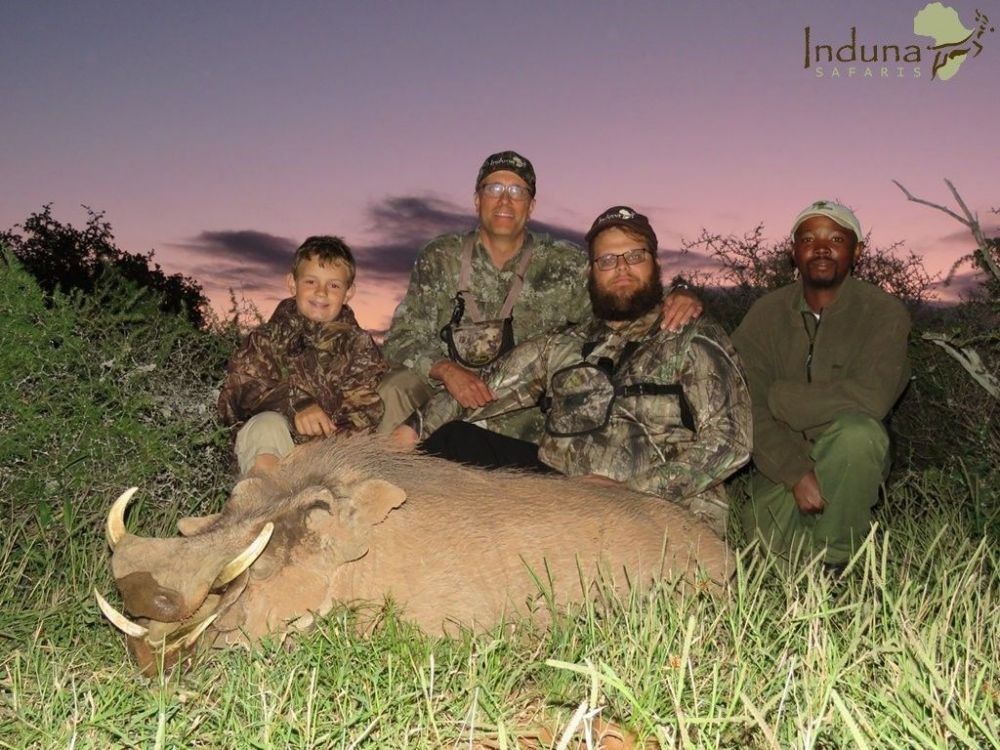 Beautiful eland! I agree about the importance of stalking in giving the animal as much chance as possible to get away, plus it’s more interesting and meaningful.

Very envious! Glad you had a great and successful adventure, hope you remain healthy. Thanks for sharing!

Congrats to all on a successful Safari. Your son took a very nice warthog. Surprised you were able to even get into south Africa that late in March. My PH spent 14 days in quarantine after arriving back in South Africa from Canada on March 10. Must have been interesting getting back home.

cls said:
Congrats to all on a successful Safari. Your son took a very nice warthog. Surprised you were able to even get into south Africa that late in March. My PH spent 14 days in quarantine after arriving back in South Africa from Canada on March 10. Must have been interesting getting back home.
Click to expand...

Thanks for the comment!
My son and I were facing a cancelled flight and no way to get past Frankfurt, but Air Canada cobbled together one last flight on the 24th to Toronto. RSA that following Wednesday, put a 21 day restriction on traffic within the country so truly was by the skin of our teeth to make it home. Frankfurt airport was so eerily quiet that expected a horde of zombies to rush the gate at any moment which would add a twist to a hunting adventure. I am still on quarantine as we speak and another 4 days before no longer deemed a leper and can make a quick run (complete with social distancing and holding my breath) to the bank to wire Induna the balance of the safari money.

I read the title and thought this was the longest hunt in AH history.
Glad you have found a place you like to hunt so much.
Thanks for sharing your adventure.

Glad you made it back on time.
You must log in or register to reply here.