Over nine months ago I read a report on another hunters experience with KMG and knew it was the experience I was looking for. Hunting in Africa had been a bucket list item for my wife Penny and I and when we realize that it was just as affordable as seven days in Jamaica we couldn’t pass it up. As we planned our trip Marius was always there with valuable information and assistance in planning exactly what we wanted. Not once were we worried that we had not selected the right hunt with the right PH. My wife and I have grown up hunting public lands in Washington and Montana and have never been on a guided hunt and had no clue what to expect other than what we had read from previous reports. Let me say this loud and clear WE WERE NOT DISAPPOINTED! Our experience with Marius and KMG hunting safaris has been above and beyond a dream come true.

When we arrived in Port Elizabeth Marius was there at the airport to pick us up himself. The drive to the Lodge took about an hour and a half which gave us a good opportunity to learn about what to expect and get to know Marius. We had a ton of questions and Marius was happy to educate us. His Pride in what he does is evident in everything he does. There were several times we were excited with the animal in our sights, but if it didn’t meet Marius’s standards we would move on to find a better quality animal. We had chosen to hunt Kudu, Impala, Blesbuck and Waterbuck.

After arriving to the lodge and dropping off our gear we went out to the range to verify our rifles were on target. A few clicks here and there and we were ready to go for the next morning. That night Kim, Marius’s wife had a wonderful meal ready for us! The atmosphere in the lodge is warm and inviting and just what we were looking for. Kim is amazing and makes the hunters feel like family. After being spoiled like this I’m not sure I can ever go back to Hunting Public lands again. Lol

On the first day we hunted Kudu. It wasn’t long before Marius and our tracker Loyd spotted several cows and some nice bulls...granted nice to me wasn’t big enough. Marius never lacked confidence in finding a better more mature bull. After a long day of spotting and stalking we returned to another wonderful meal prepared by Kim.

On day two we were back on the kudu and by 9 o’clock Marius had me literally in my socks stalking a beautiful mature bull. I was shooting a tikka T3 300 WSM And felt comfortable up to 300 yards with the 3 x 9 scope. Marius and I found a great position within 270 yards. We could see cows from where we sat and Knew the bull wasn’t far behind. Within a few minutes we could see his head and we waited patiently for him to step out from behind a larg bush. Marius set up the sticks so I could shoot from the prone position. Finally the moment came and my crosshairs landed right on target and I squeezed the trigger. This beautiful bull took a double lung shot and ran maybe 30 yards. 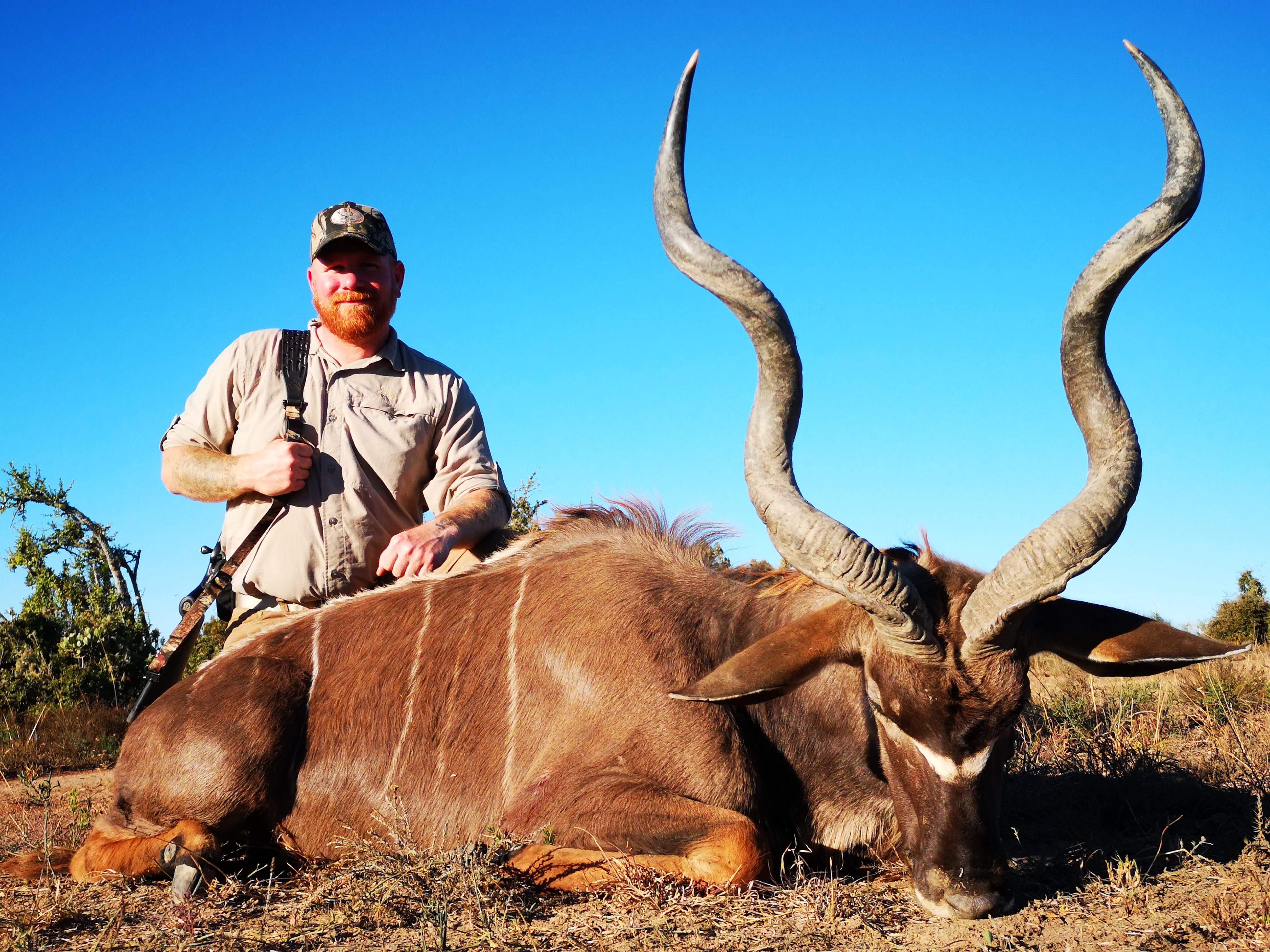 The feeling of taking a beautiful animal like this so far away from home can never be fully explained. Afte a home cooked lunch back at the Mpunzi lodge it was Penny’s turn to hunt for Blesbuck. We had seen quite a few so we could be really picky about finding a beautiful specimen. Penny was shooting a Tika t3 in .308. It wasn’t long before Marius spotted beautiful mature bull. We put the stalk on it and 30 minutes later he had us in position. He threw up the sticks a whispered His instructions to my wife. She squeezed the trigger and made a perfect one shot kill on this beautiful boy. 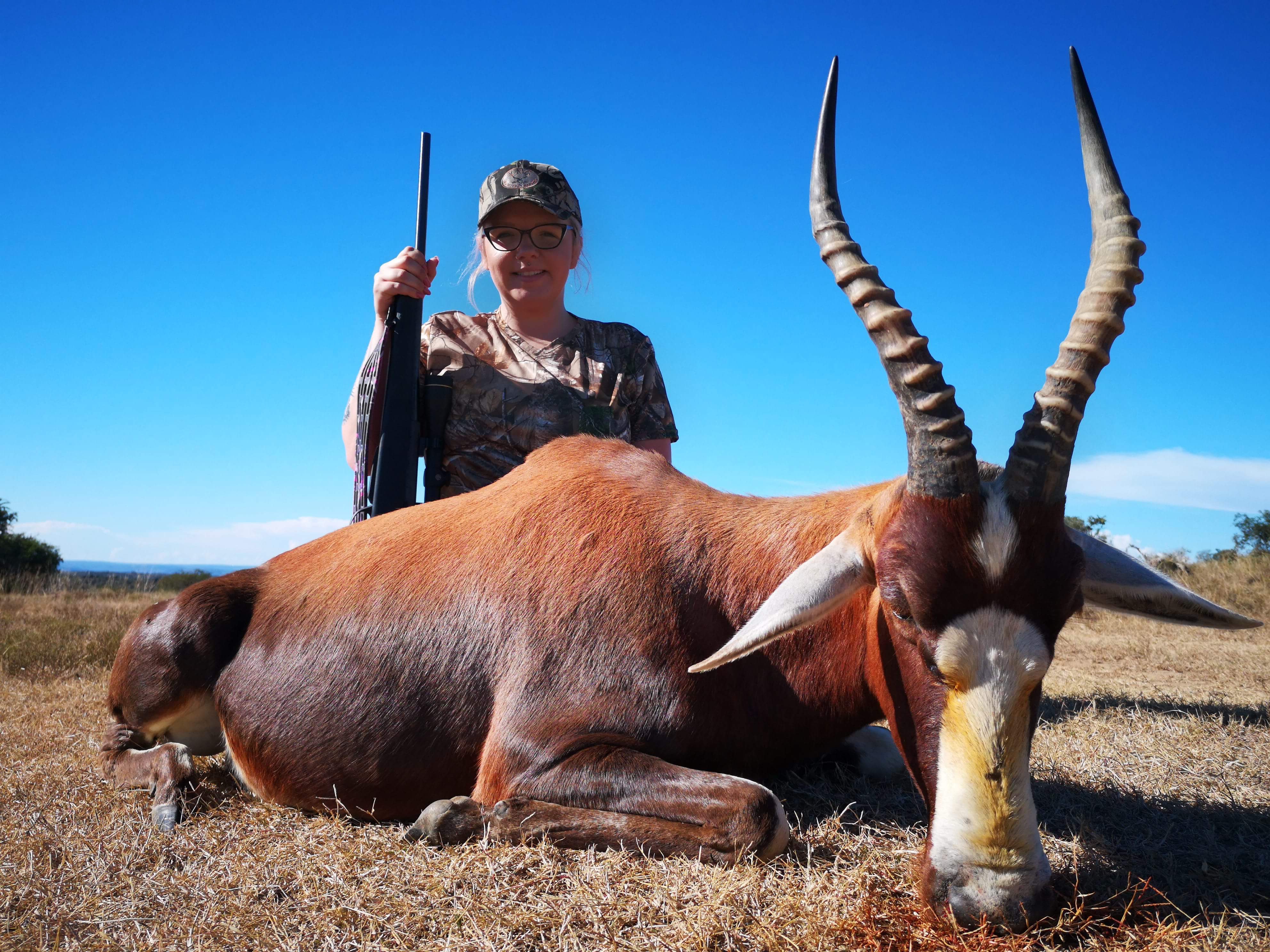 On day 3 we went about a half hour away to another area in search of the ghostly Waterbuck. The morning was cold but sunny and it wasn’t long before we found a couple of cows and a massive bull Trying to soak in some sun. We tried to Close the distance But this smart boy headed right into the thick stuff. We continued to hunt hoping to come across to him again. We seen several other nice bulls but none as big and mature as the first. In the next few hours we spotted over 10 different species of animals. In the areas we hunted the sheer number of quality animals we saw was simply amazing. The terrain is challenging, And the animals are sly. You can spot over 100 animals from across a valley, but once you put the stalk on they will disappear. Marius and Lloyd worked like a world class team and not once did they fail to get us on the trail of what we were after. We seen several other waterbucks including two smaller bulls. That evening we knew the waterbuck would be out to feed, as we walked the ridge stopping every 10 feet to glass, we finally seen him. This time we were closer and I could see how massive he was. Unfortunately he also saw us and headed up over the ridge. We put the chase on sprinting up over the ridge jumping over bushes, cactus, rocks and anything else in our path. He zipped by us within 30 yards and ran down into a draw just as the light was leaving us. Whew, what an amazing day! Tired and worn out and thankful for another wonderful home-cooked meal by Kim we slept like babies. By the way the accommodations far exceeded our expectations with a massive king size bed huge soaking tub and massive shower! Do we really have to leave?

Great story so far. You have a good trophy list.

Nice start! Congrats and thanks for sharing, looking forward to more!
John 3:16

Yes Marius and the KMG crew are tough to beat. Glad you enjoyed your hunt. I’ll be back one day soon.
Last edited: Jun 1, 2018
Tommorow is promised to no one. Go live your dreams.

@KMG Hunting Safaris , Marius has high standards and is a true professional.
on the ocean or in the bush.

Darin,
You picked the best for your first safari, Marius got me my first African animal a Kudu also, the feeling that rushes over you when you see your first African trophy is unbelievable. Marius is just getting warmed up, enjoy every minute of your hunt, seems like it will be over too quick. Hey don't worry you will be planning your next hunt on the way home, if you don't book before you leave!

Looks like your off to a great start, can’t wait to hear the rest! Marius is a true pro and I look forward to hunting with in July for my sixth hunt, he never dissapoints!

You could private message Jerome or Brickburn @Darin

We left bright and early eager to find the big waterbuck bull we had seen the day before. The night was cold dropping down to 2 degrees Celsius, we drove to the far ridge so we could glass the side where the sun was shining and were we last seen him. Within 10 minutes Marius spotted several cows & a bull lying in the sun. We then drove down and around the valley so we could get in position to start our stalk. We hiked to within 270 yards and had perfect cover and a great view of the cows. We could see 1 standing and 2 cows lying down. They didn’t know we were there yet we couldn’t see the bull. We could have moved closer but there was a large open area maybe 30 yards long and we would risk being spotted, so we stayed put and waited. Not more than 3o minutes later out he came, nose up a cows but completely oblivious to our presence. Marius had told us several times how tough these animals are and that it was not going to be easy to put him down, even with a well placed shot from my 300 WSM with 165 grain hand loads. I felt calm and confident as I set the rifle in the sticks and waited for the perfect opportunity. He circled a few times checking to see wich cow might give him the time of day, none were interested...lol. When he finally stood still clear of any cows I squeezed the trigger. Boom, miss! How and why I have no clue, everything felt perfect. He just stood still, I chambered another, placed the cross hairs behind his shoulder and fired again. This time he ran, circled and went about 40 yards to our left. Marius said “shoot again.” I chambered another and squeezed the trigger. He was now a few yards closer and we could both tell this shot was on the money. The bull winced and as the cows ran to our left and he followed. Within in minutes our tracker realesed the dogs. We found him down in the bottom held up in some very thick bushes, the dogs pushed him out and as he seen me he raired up and we were face to face from a distance of less than 10 feet. Wow! He peeled off and continued through the bottom.....holy cow that was insane. As we continued to search the bottom the dogs alerted us again, he finally had laid down within 50 yards from our last sighting. The dogs had him pinned down well and he tried but couldn’t muster the strength to get back up. Holy cow he was nice! And holy cow Marius was right he was tough. 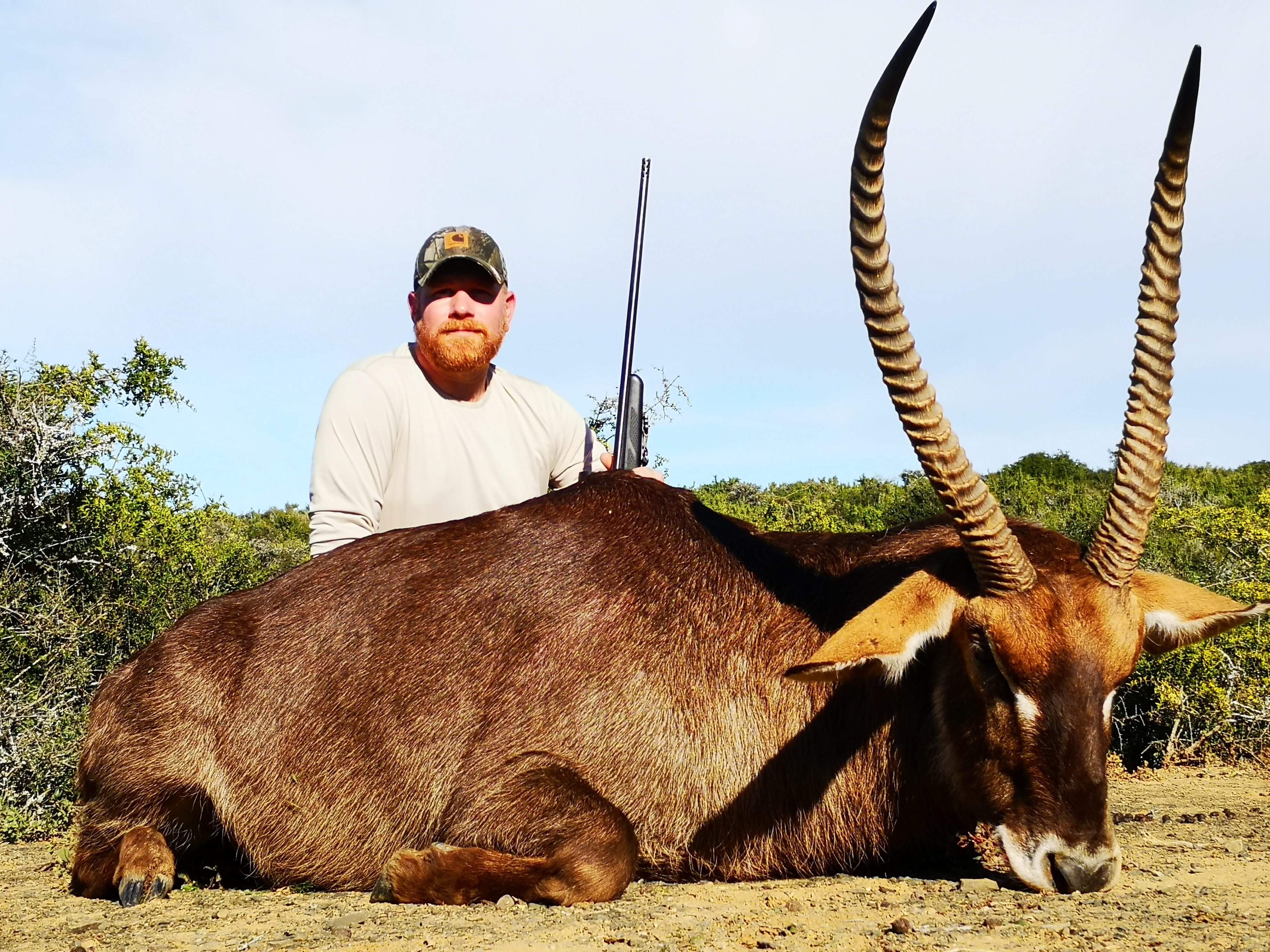 It still amazes me how large these creatures are, almost deceiving as they didn’t seem all that big though the optics when compared to the Kudu bull.

Here’s a better picture to show his body size.

What an amazing hunt!

Cheers to Marius and the whole KMG crew! 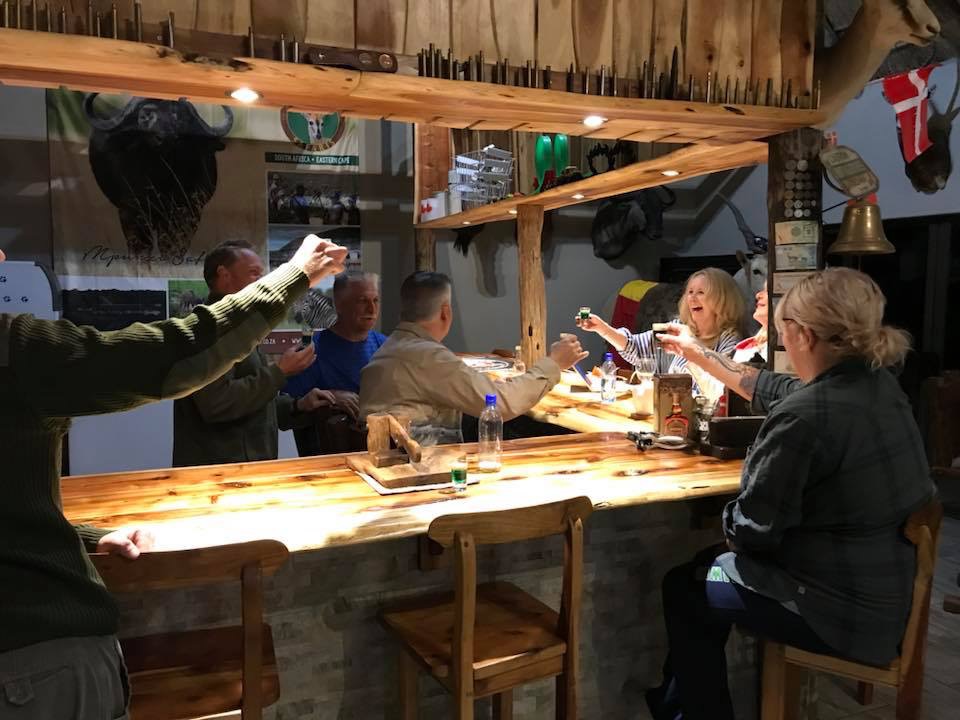 Excellent report and great animals. Great first safari for sure.

Really old mature bull, congratulations. Sounds pretty close to the same finish on my waterbuck with Marius two years ago. The dogs did their job and bayed him up several times after I had two shots in the boiler room. The brush he was holed up in was the thickest crap I ever tried to run through.
Y'all can go to hell, I'm going to Texas! Davy Crockett

Congrats on the waterbuck! They are really big critters aren't they!?
John 3:16

Great read so far! Can’t wait for the rest!

Congrats on the Waterbuck!
You must log in or register to reply here.