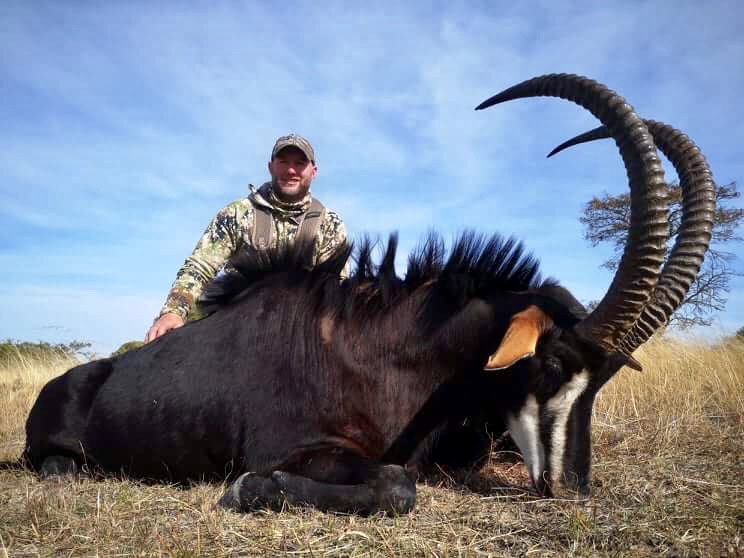 My wife and I ventured to the eastern cape of South Africa for our first African hunting experience in early June with KMG Safaris. When we arrived in Port Elizabeth, our PH Marius picked us up and started heading for the lodge. We stopped outside of Grahamstown for a quick bite then headed to the lodge. The accommodations were very high end and the bar and fridges were stocked with anything you could want. We settled in and went to the range to make sure the rifle we were using was on point.

The next morning we went to the first concession in search for a nice Kudu. Upon arriving we joined up with one of our trackers and began the first hunt. We drove around and glassed several locations and spotted several bulls, some in impossible locations, others needed some time to grow. So we spent several hours glassing, spotting and stalking, when we saw a very nice old Zebra on his own. We decided to shift gears and let my wife take her first animal. We put on a very good stalk and snuck within 150 yards of the animal. My wife put on a very good shot and harvested a massive zebra. 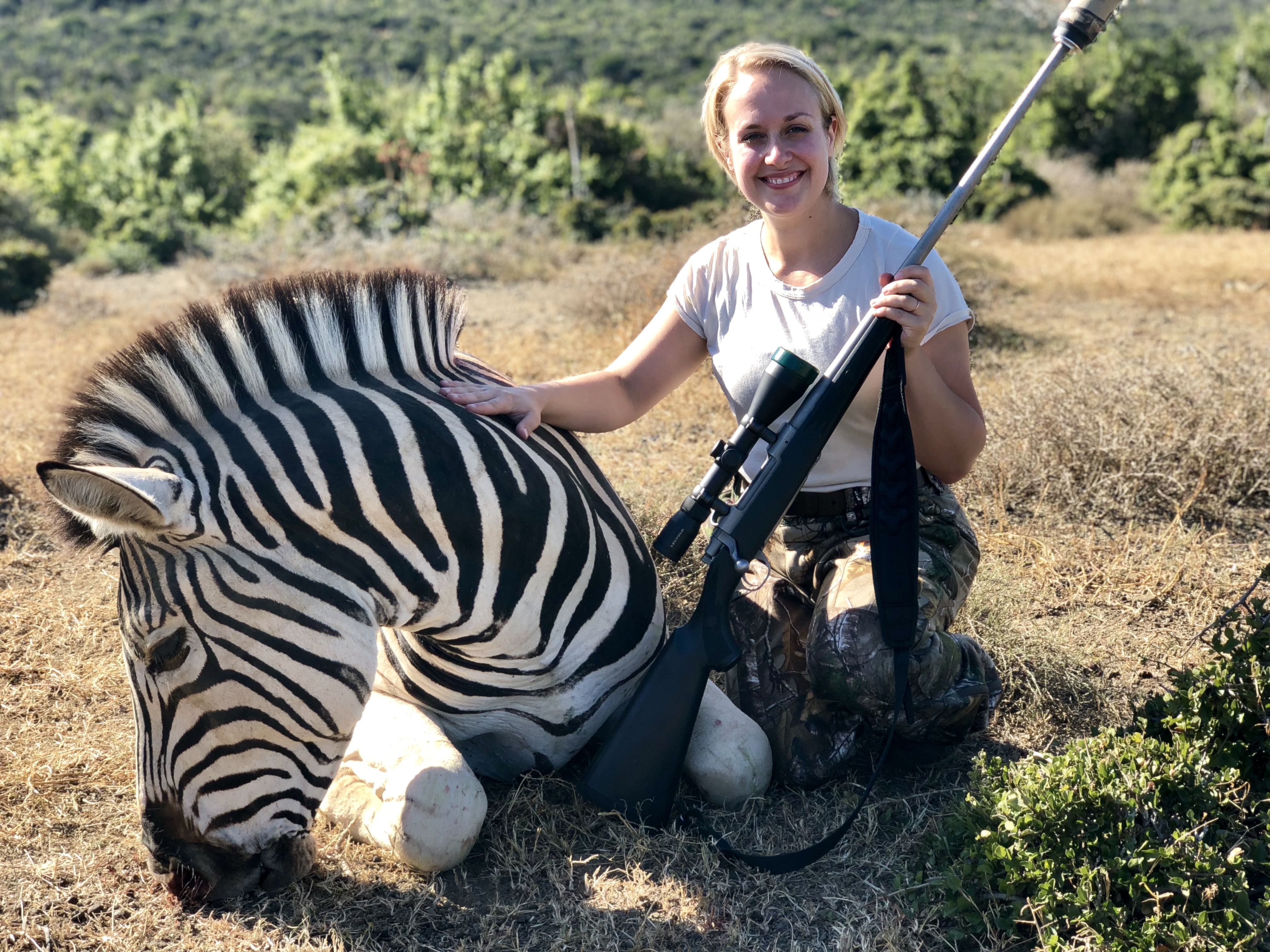 The second day we took a private safari at Pumba Preserve after the previous hunters suggested it to us over Addo. We also highly recommend Pumba if you go with KMG on your hunt. Kim will set everything up for you and the food and experience there was excellent.

The third day we decided to go after Gemsbok. We went to a different concession and met our tracker Friendly. He was just as his namesake, but not only was he friendly, he had a great eye. Within two hours we spotted a group of Gemsbok and began our stalk. Long story short.... harvested a very nice gemsbok. 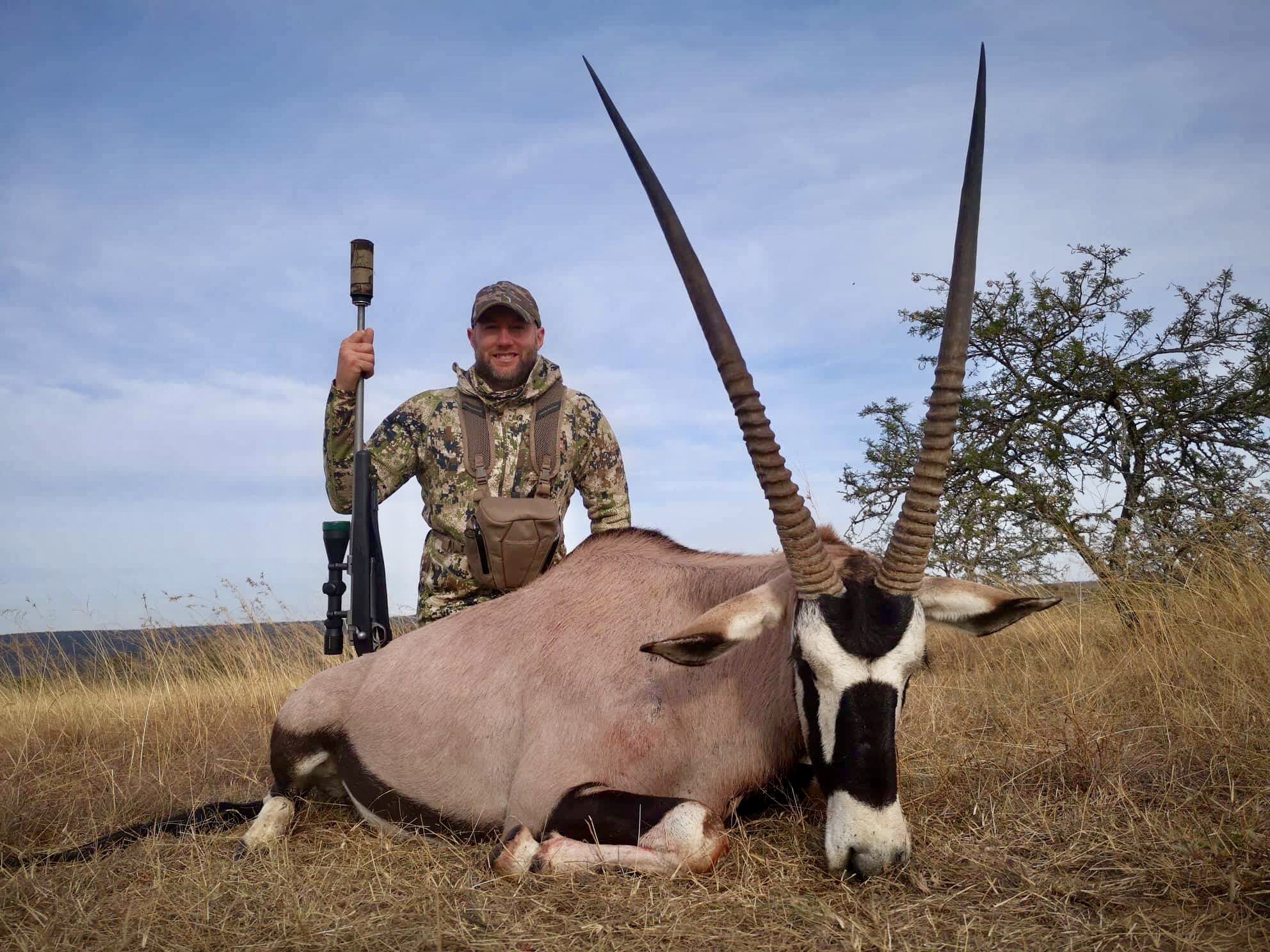 Since we had a ton of time left in the day, we dropped him off at the skinning shed and decided to go look for Sable. We drove around for a few hours and decided to head to a spot for some lunch. Just as we were almost to the ranch house the tracker spots a Sable about a mile from the truck. A plan was put together and we began our stalk. We worked the wind and snuck within 75 yards and took the Sable. He measured 44 on one side, 42 on the other, with 10 inch bases. His horns had a very deep curl, almost touching his back. We got the sable loaded up and headed to the skinning shack to drop him off and eat lunch. Since we still had the rest of the day, we decided to look for a warthog. We drove around to a spot where they thought they would be, and began glassing. It did not take long and we found a nice tusker that my wife wanted to go after. He was hot and heavy after some females which allowed us to get very close and personal. 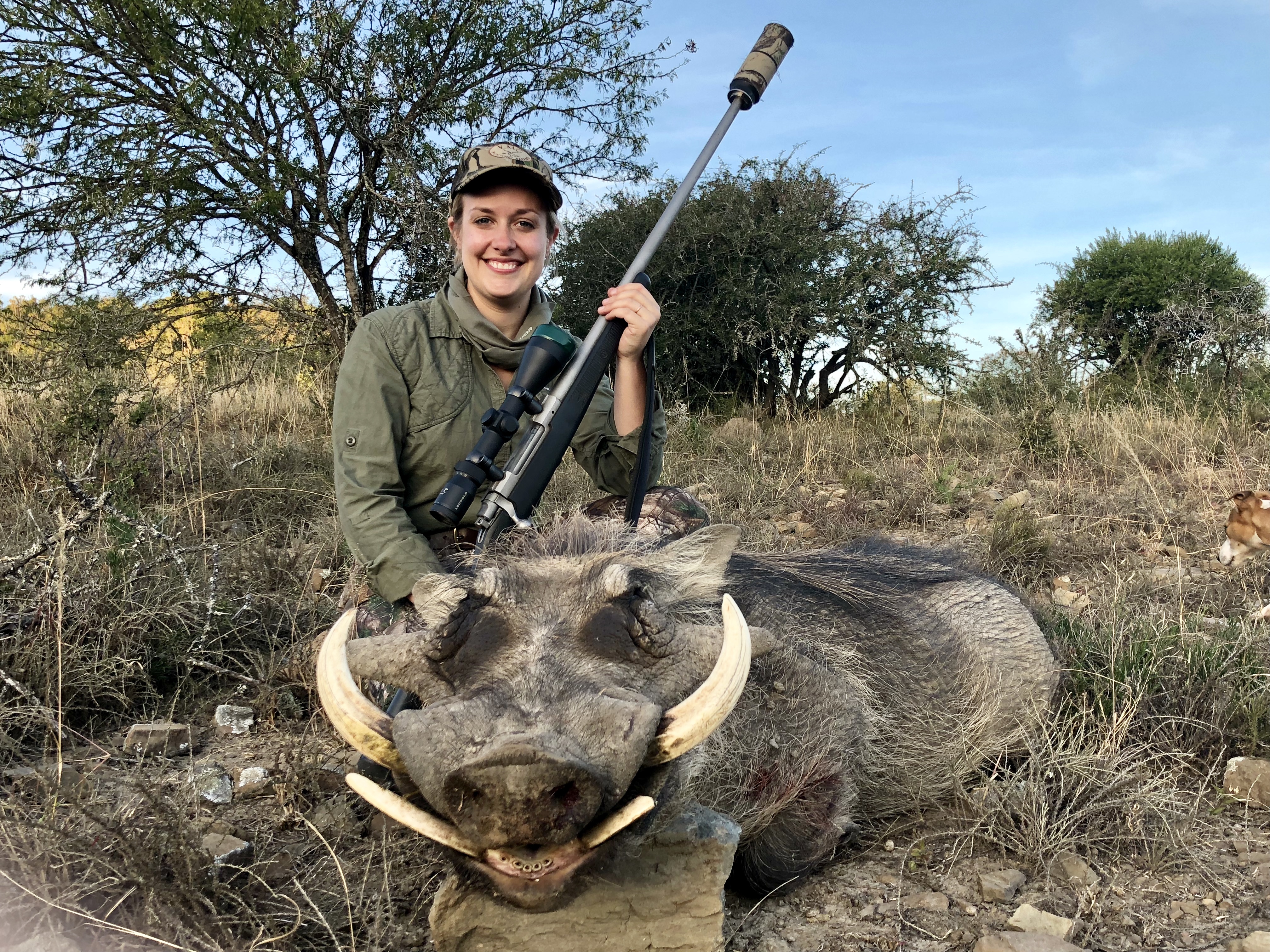 We had an extremely lucky day.

The next day we decided to go after kudu. We went to the original concession and began our spot and stalk. With the unseasonal heat and wind, we figured they would be holed up in ravines in the thick brush. We switched tactics in the afternoon and tossed stones in each ravine as we walked along the ridges to see if we could push some out. The first half of the day we saw a good bull, but we never had a shot. We took a lunch break and started up again. We set up on the side of a ravine and waited as the tracker tossed stones. As we headed back to the truck we heard a Kudu bull bark and ran back over to get set up. The kudu ran up the other side as my PH judged him. He said he was a good bull and I pinched him quick. 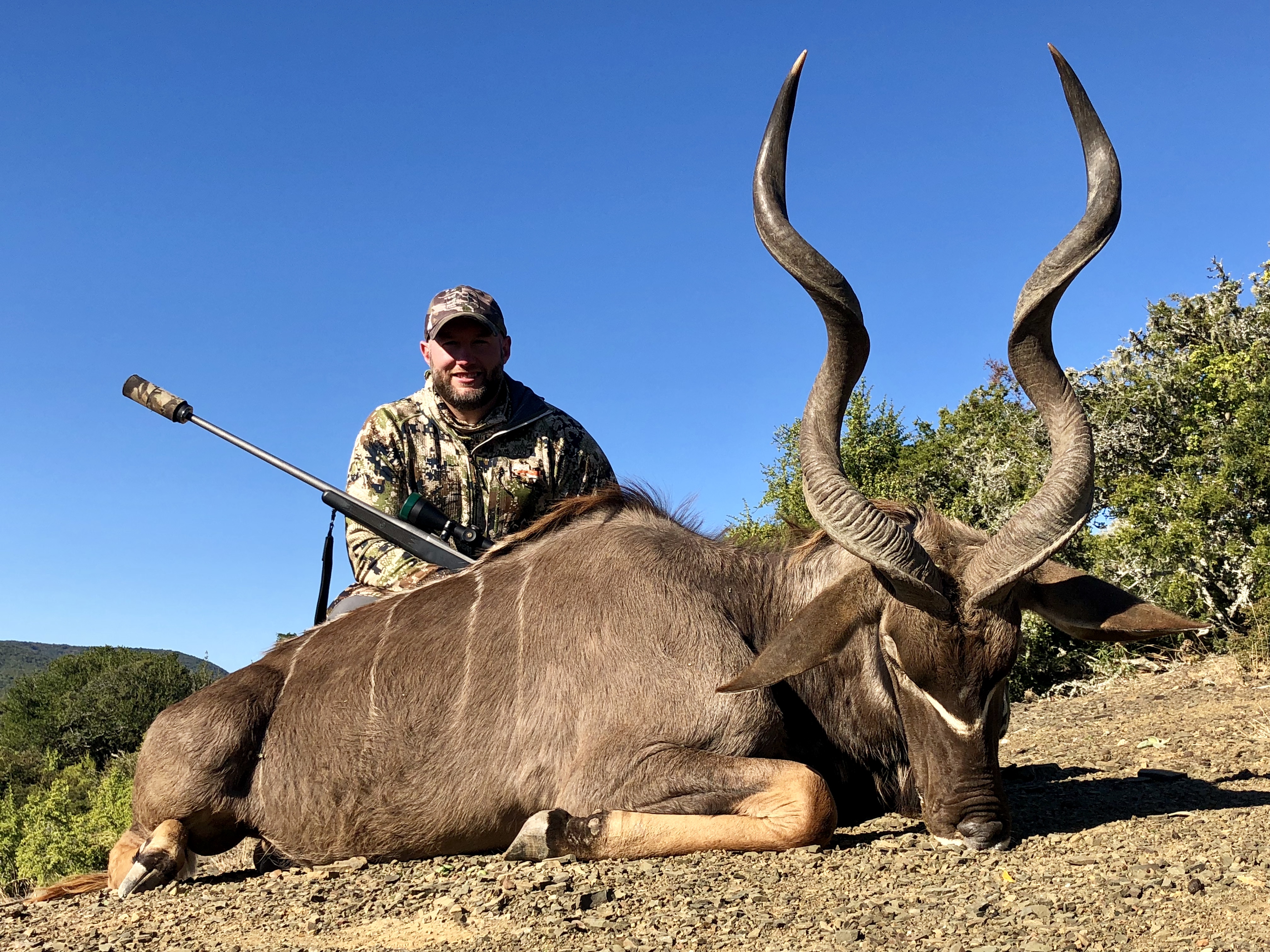 The next day we went to a concession near Port Alfred to look for Blue Duiker. We met up with our tracker and beagles and headed to the first setup. The view was spectacular as we hunted with the Indian Ocean in the background. The first setup we had several shot opportunities, but struck out. We took a quick break and headed to the next setup. We set up in an dark wooded area with tons of blue duiker sign. It did not take long for the dogs to get on the trail and push them through our setup. My wife harvested a nice young blue duiker. Definitely a fun hunt! 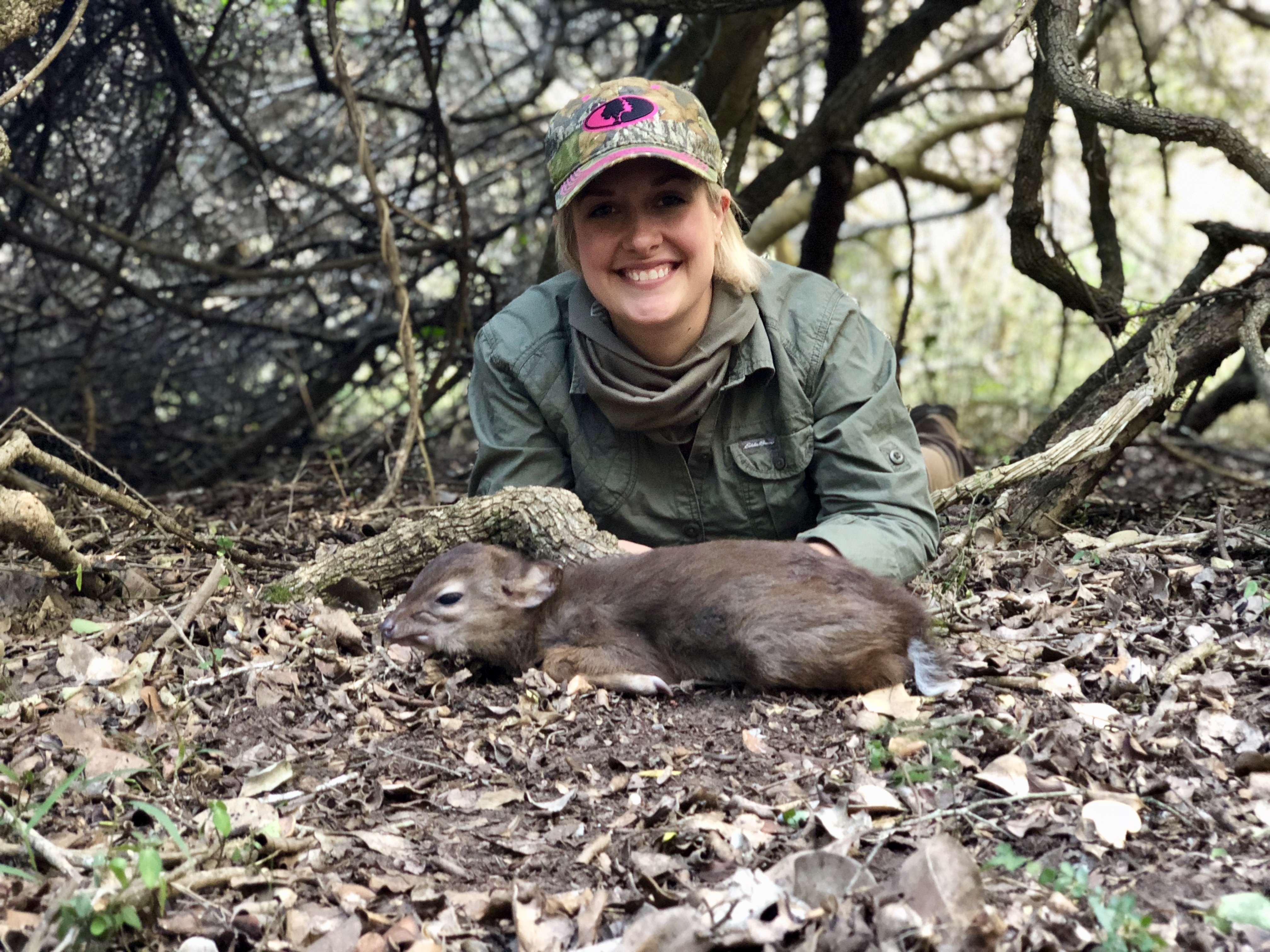 The next day my wife and Kim (KMG) went to Port Alfred for a spa day while I went back out for a bigger Kudu. We put on another good hunt at the original concession. After a long hot day of walking we spotted a group of cow Kudu feeding and decided to take a closer look to see if there were any bulls nearby. We set up about 200 yards away while one of the trackers stayed back with the truck to glass from a distance. We were about to move to another spot before it was too dark but the tracker at the truck noticed a bull over top of the ridge out of our sight. We decided to stay put and hope he would give us a shot before it was too dark. After about 30 minutes he presented an opportunity at a good distance. The 300 win mag gave him a good poke but it was a little low so we made a plan to move in closer. KMG has two jack Russell terriers that are excellent in tracking and baying the animals. We got set up and put a second shot and one of the dogs ran up and bayed the kudu, allowing us to get within 10 yards and quickly expire the bull. 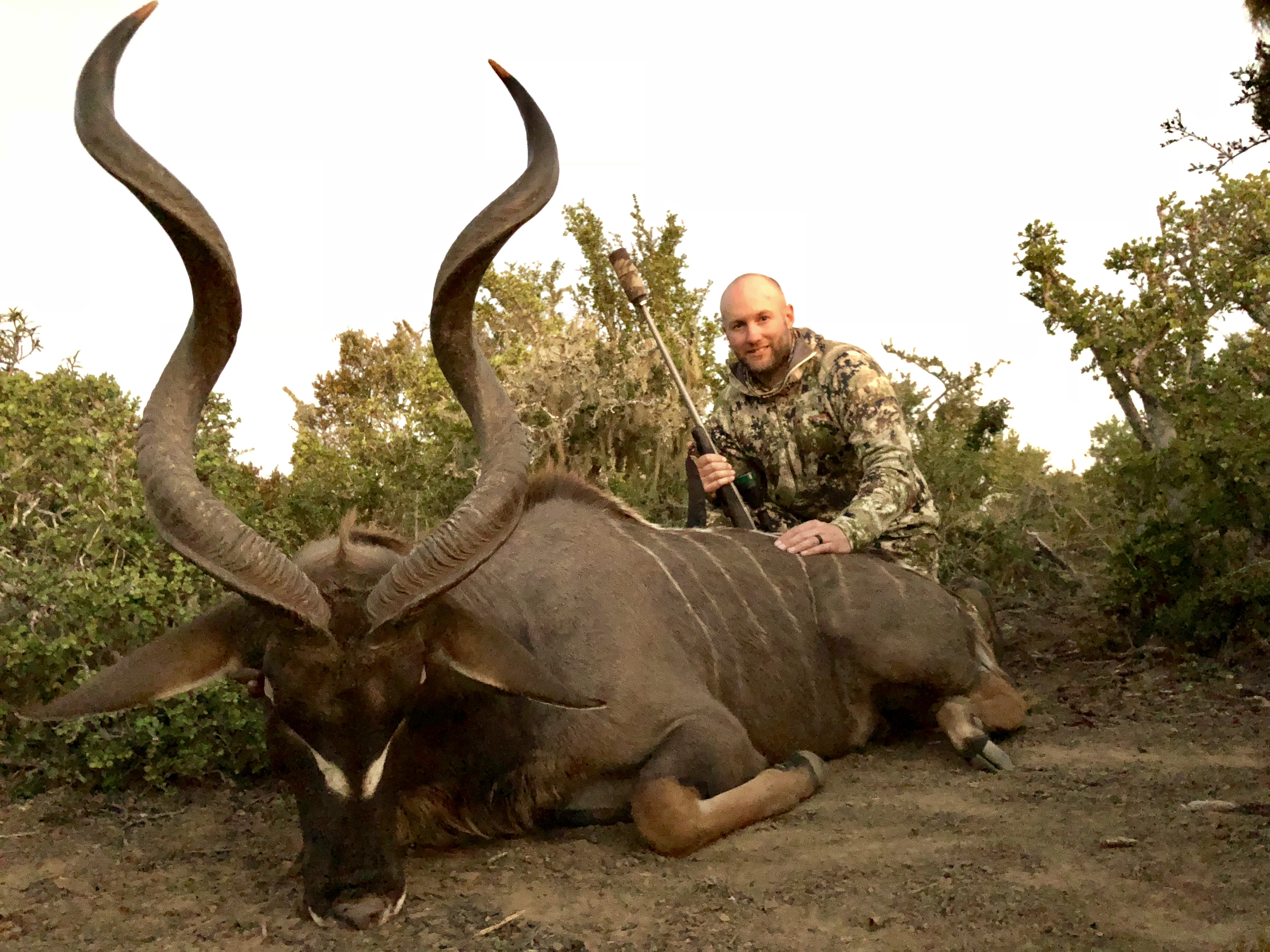 Since we had harvested everything we were after. I asked what animal they recommend we go after as a good representation of South Africa hunting... the consensus was cape bushbuck. Sooo we went to a new concession near port Alfred and met our guide. We went to our first concession but only saw a lot of Oribi, Reedbuck, and Blesbuck. We took a lunch break and headed to the next spot. We quickly spotted a bushbuck and snuck within 40 yards. The PH thought he needed another year, so we moved to another area. As we worked our way to a glassing spot, we noticed a Caracal down a ravine perched on a trail. We quickly switched gears and made a great shot on a very big cat. 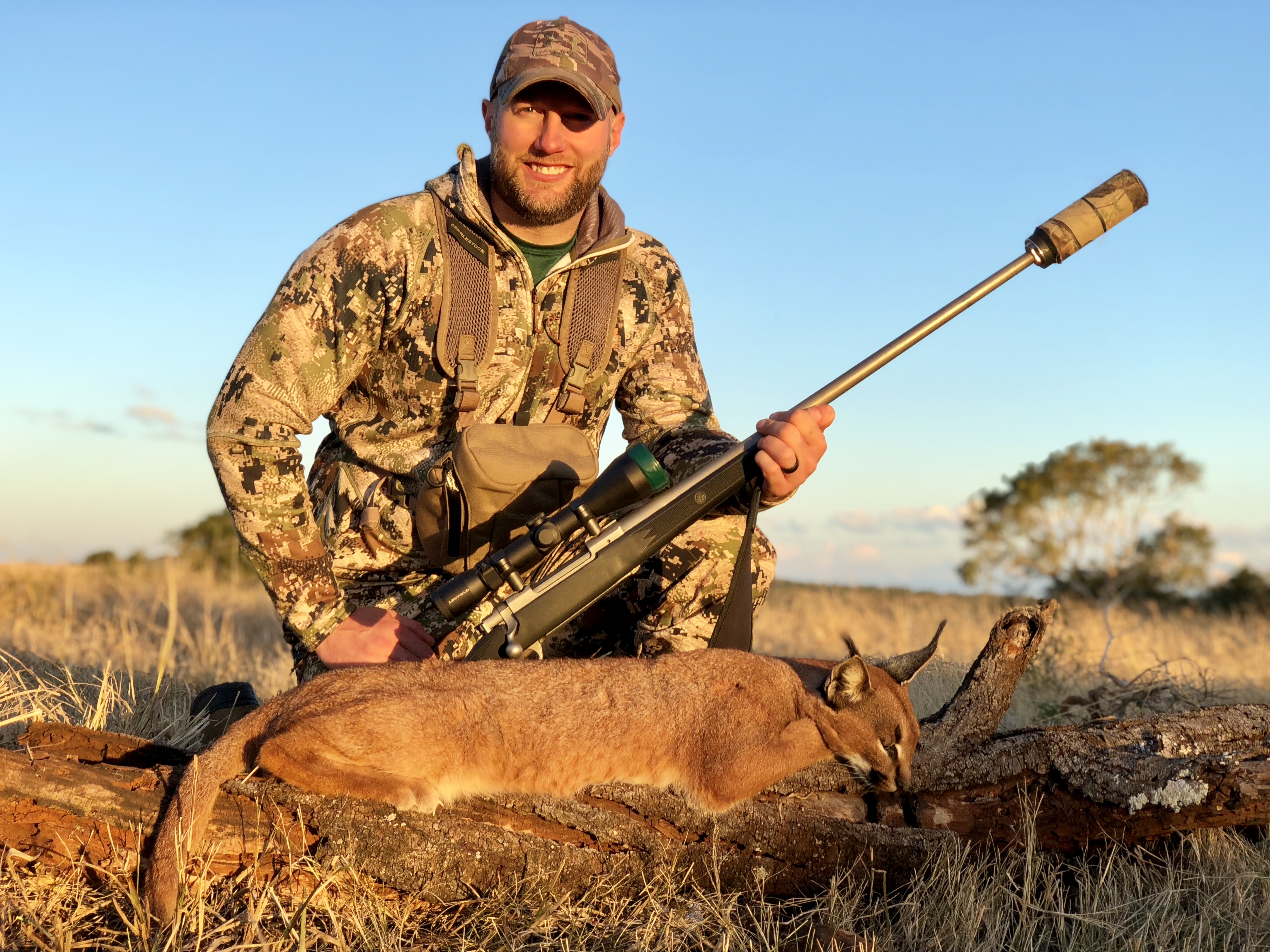 We pressed on to an oats field hoping to have enough light to harvest a bushbuck. As we approached the field, we heard rustling up above us walking towards the field. Thinking it may be bushpig, we held tight and set up. Suddenly, one of them started running down the hill in our direction. As we quickly moved to get out of the way, it changed its mind about coming down as well. We moved back and set up again... As the sun set we heard more rustling walking down the hill. After a while warthogs crossed the trail in front of us and headed towards the field. 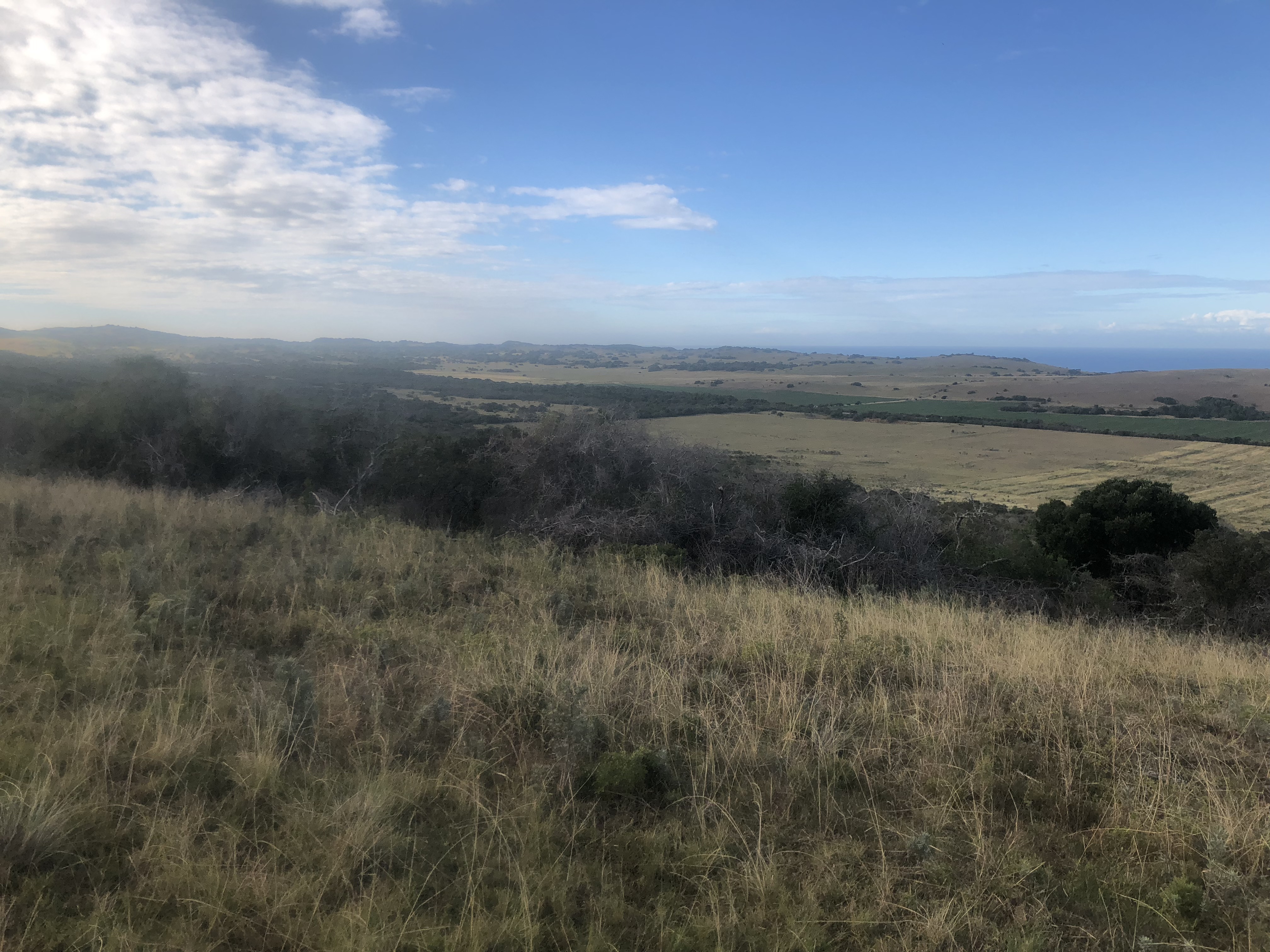 KMG Safaris put in an extraordinary effort every day, regardless of the weather conditions. We put in the miles and our success is a direct reflection of their efforts. The equipment they use is top notch, and we never really had to worry about anything. Kim made us feel at home when we were at the lodge, the food was above superb, and a very enjoyable experience. We consider Kim and Marius new life long friends.

At the end of our trip, KMG arranged a stay for us at AZambezi River Lodge in Zimbabwe. The location was nice, away from the touristy part of town. We did the vic fall self guided tour, walked with lions, walked with elephants, took a helicopter ride over the falls, and had a dinner on an old luxury steam train overlooking the falls. As an added bonus to myself I booked a charter for Tigerfish on the Zambezi. I definitely recommend Joes Fishing in Vic falls if you enjoy fishing. We saw a lot more wildlife on the small fishing boat than on the booze cruise... even had to speed past several groups of hippos as we were fishing along the banks. 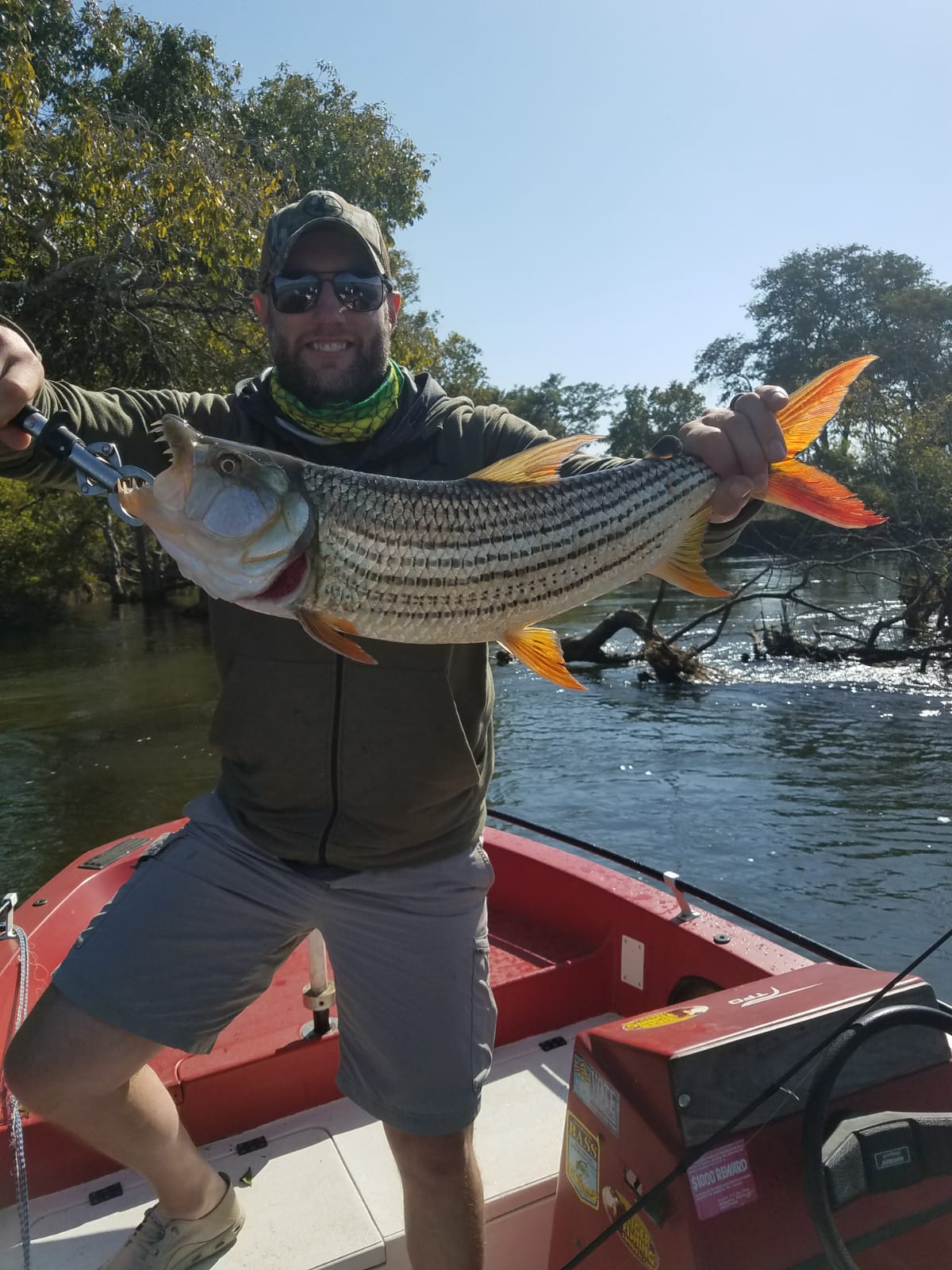 Looks like a great trip! Congrats and thanks for sharing!
John 3:16

Congrats on a great trip and hunt. Looks like you had a good time! You can't go wrong hunting at KMG, I head over tonight for my sixth hunt. Love how the bushbuck hunt turned into a caracal hunt! You do realize you will have to go back for that bushbuck, right?

Congratulations.
You certainly piled a lot into your trip. I'm jealous of that Tiger!

Congratulations on a pile of great animals! I walk into KMG's lodge two weeks from today and hope to have the success you did!
"I don't need to shoot farther...I need to hunt closer." - G. Sitton

Congrats, that was a great trip with fine trophies !

Congrats on a great hunt, I hope the next one goes as well.
Micah 6:8 - Seek Justice, Love Mercy, Walk Humbly with your God

Another satisfied client with KMG. I will agree that KMG is top notch all around. Congratulations on your hunt.

Oh yes another fine hunt with KMG! IMO it’s much easier to find a good bushbuck than a caracal. You definitely did the right thing taking it!
Africa on my mind.

Congrats on a very successful safari. Thanks for the report. Great to hear you got out with Joe as well.

Congrats mate. I finished a great safari with KMG yesterday. Will have to work on a report. Saw your kudu, very nice trophies !

Great hunt and very nice trophies. Congratulations
Tommorow is promised to no one. Go live your dreams.

Ridgewalker said:
Oh yes another fine hunt with KMG! IMO it’s much easier to find a good bushbuck than a caracal. You definitely did the right thing taking it!
Click to expand...

Really Nice.
You must log in or register to reply here.