All fine animals! I’m excited to see you’re after a croc too! I really enjoyed my croc hunt even if it was rather brief.
Africa on my mind.

Congratulations on the buff!
Brandon Gleason

Great job. Thanks for sharing.

Very nice animals taken on a proper hunt! Congratulations.
"When my friends tell me that I have led a remarkable life, I have to admit having done my best to make it so" - John Kingsley-Heath

Well we started at 6AM. Drover for a couple of hours till we found tracks. We followed the tracks and it was quite difficult. Gravel and dry leaves made a lot if noise. The vegetation was thick and nasty with lots of thorns. We finally went back for lunch.

In the afternoon it rained and we started tracking again. Much less noise. We found two bulls with one “white faced” meaning it was old. Never saw more than the head and Marius would not let me shoot.

In the mean time George was having a great time shooting plains game and got zebras and a lovely Sabel.

The vegetation here is nasty. Seems to be designed to scratch and hurt. All
Part of making hunting exciting and worthwhile when you get what you want.

Tomorrow I will look a short while for buff And then switch to plains game. George seems to be interested in looking for buff and we don’t want to shoot more than two between us 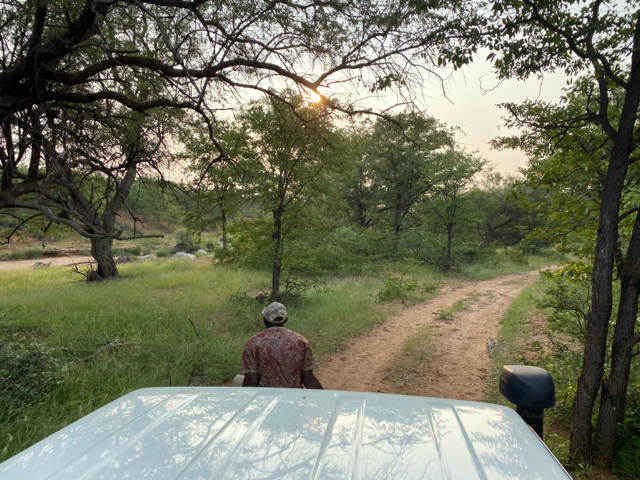 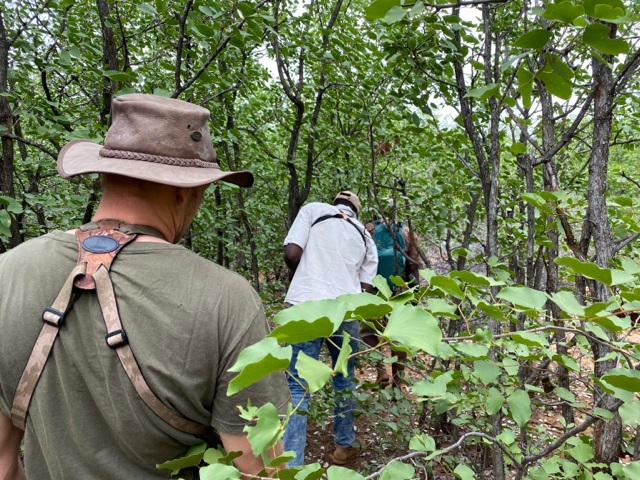 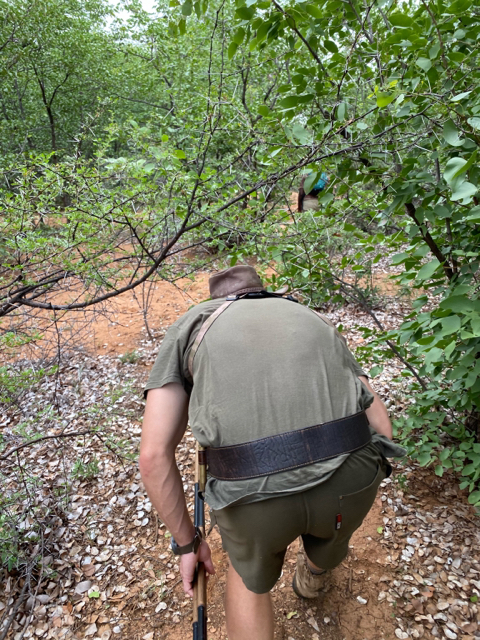 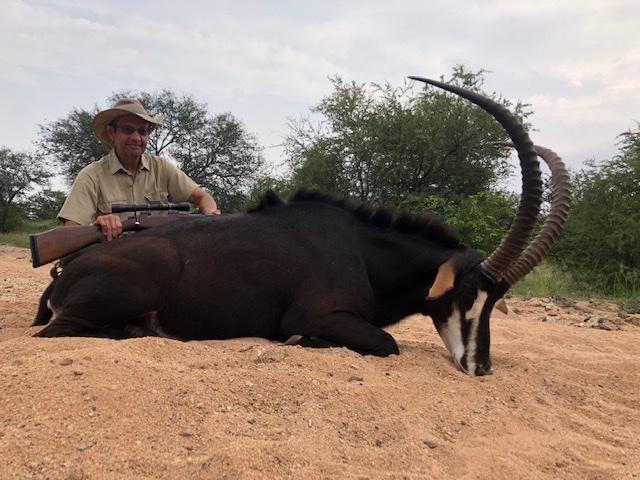 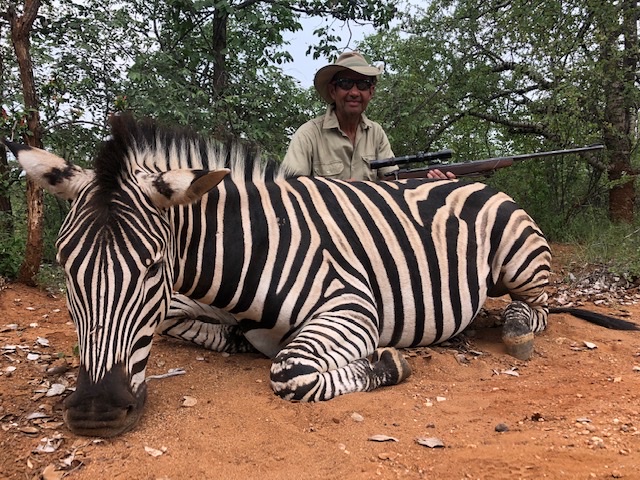 Nice! I only wish I was there in the heat with you rather than here in the cold and snow!
Africa on my mind.

Congratulations to you and the Team on a very fine buffalo

2 hours looking for tracks on the truck

Finally stalked for 3 hours with Marius and shot a buffalo in the chest. Turned out to be too low and hit the brisket missing the heart.

We tracked for another 4 hours and Marius found it.

Suffice to say another .375 rounds dropped it.

A magnificent trophy. Marius and all his team are the utmost professionals. I can not thank them enough.

We go to location 2 later

Oh yes I do remember the thorns. They are like 3-4" long, it is wild. You can be seriously injured in those bushes. Everything in Africa is tough.... even the plants.

We checked for tracks for an hour in the Toyota Land Cruiser and then followed them.

The previous nights rain made it easier to follow tracks and we ended up following the tracks of a large buff and an big Eland Bull who were traveling together. Reminded me of a Rudyard Kipling book for children.

The Eland and Buff parted ways later and we decided to call it quits and look for plains game.

Marius was getting a bit fed up with the search after being scratched multiple times by thorn bushes and walking on noisy gravel.

George was also looking for Buff but never got a clear shot.

We went to the plains game area and drove a long time but found nothing. We guessed it was because they were running from the sound of the vehicle.

Marius decided I should wait in one of the roads and see what would happen if the TLC drove around the block. It worked! A wildebeest ran besides our position and I got .375 round into him. A nice trophy.

George in the meantime was looking for Buff as well.

We went back for lunch and then resumed hunting.

George shot a wildebeest as well. Not sure how our wives are going to react with the bunch of trophies we bring back

In the afternoon we did not get too see much. The bush was just too thick to see very far.

On the way back to camp we saw some nice Gemsbok. Marius insisted we take of our shoes to stalk them. Walking in socks and getting thorns in my feet was not pleasant and the Gemsbok ended up disappearing. Apparently walking in socks is a bow hunters trick. Well they can have it

So Tuesday more plains game and then Crock hunting. 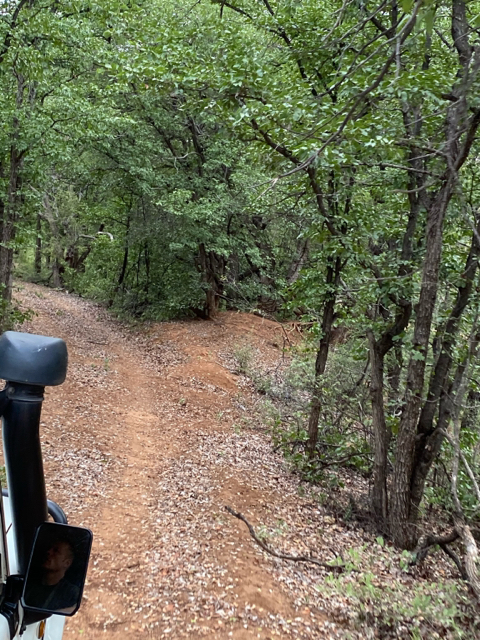 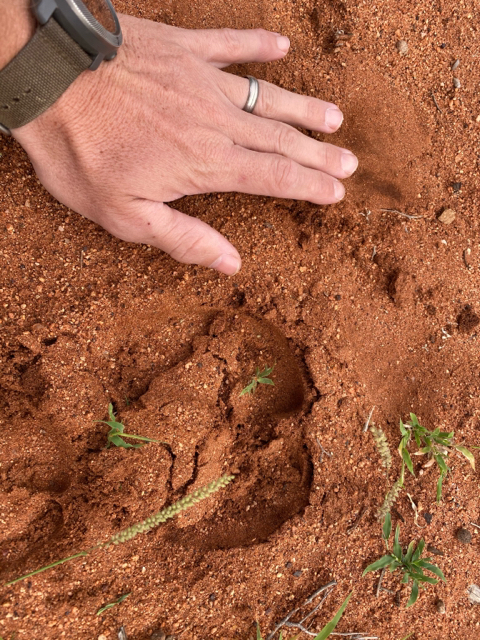 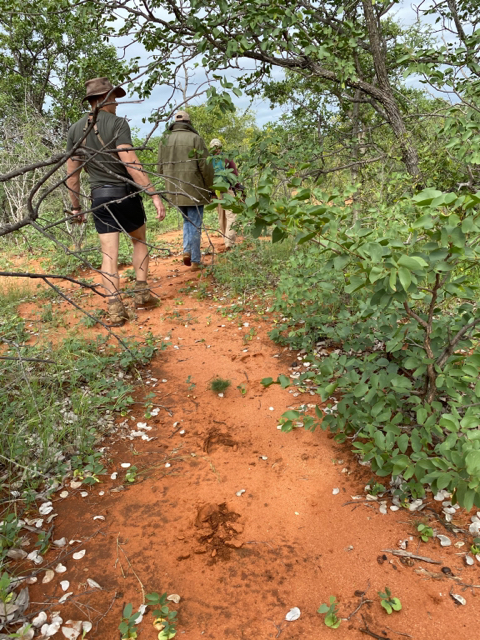 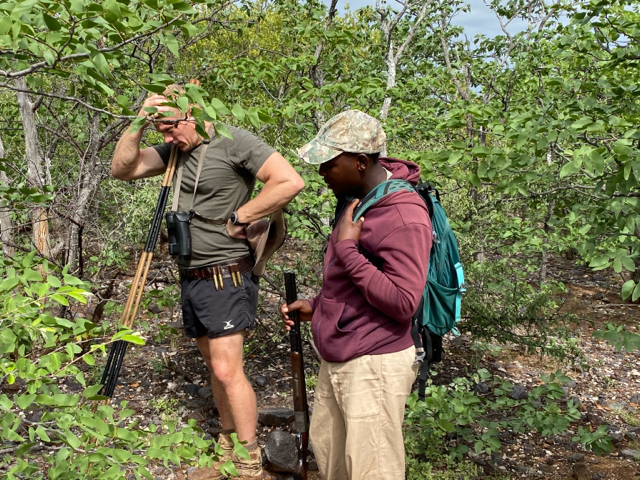 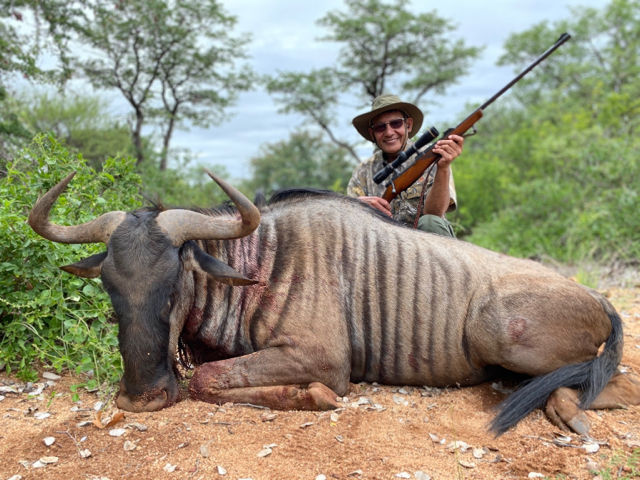 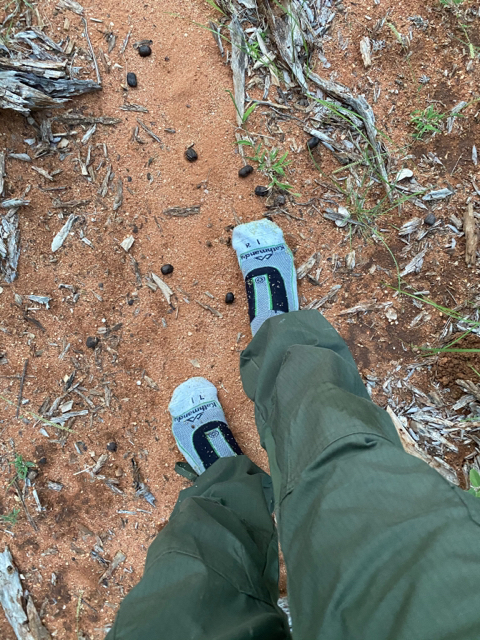 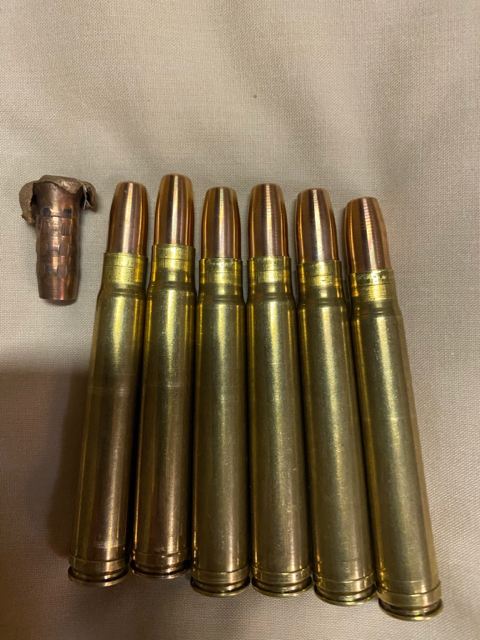 Congratulations nice buffalo
Tommorow is promised to no one. Go live your dreams.

On Tuesday morning we went plains game hunting again while waiting for the sun to get hot enough for crocks to start sunning themselves.

Later we walked along the possible crocodile sunning areas and saw one crock lying on the edge of the water. We got into position to shoot but the wind changed and it jumped into the water. These animals are so switched on. Nothing got him interested again including bating.

On Wednesday we went through the same process. Game plains game hunting in the early morning and when the sun got hot enough we looked for crocks. No luck with the plains game but a crock was spotted in the far distance and a shot was thought possible at 130m however it must have seen movement and slipped back into the water.

In the end I went looking for plains game again. I did not find plains game but on the way home lo behold there was a BIG Nile crocodile sunning itself. I crawled on by belly to get in position about 100m away placed the .375 on the shortened tripod and fired at the "end of the smile" as instructed. It did not move. I fired another shot in the neck and one behind the shoulder as the PH had told us before. Apparently the first shot killed it.

On the way home after collecting the crock we saw an impala and after a short stalk shot him on the shoulder.
That night we all had whisky and cigars. What a wonderful day.

On Thursday we left for our final destination which was a few hours away and was hotter and the foliage was less dense.

I went looking for plains game again. After quite a while searching we saw a heard of Rhoan and after a short stalk I was put into position and shot it on the shoulder. To my surprise it ran and we stalked it for a few hundred meters before seeing it not moving under a tree. I fired again behind the other shoulder and it dropped.

I am now at a hotel near the airport and we will be leaving soon to go back home.

Thank you Marius and KMG Hunting Safaris team for a wonderful experience.

Now next week back to the realities of crashing stock markets and the Corona Virus which seemed so far away in the bush.

Gentlemen, I hope you enjoyed the journal.

Best wishes to All 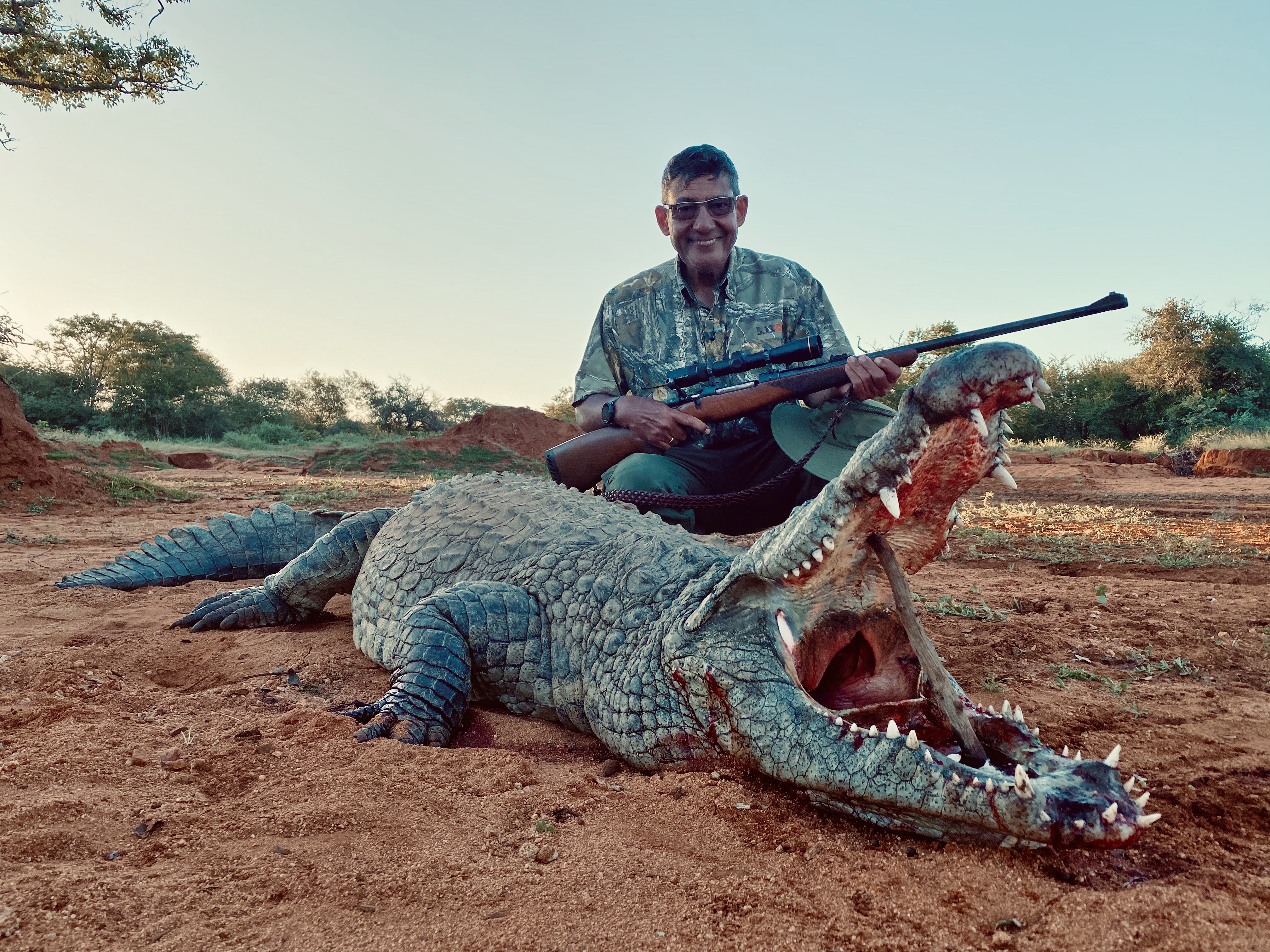 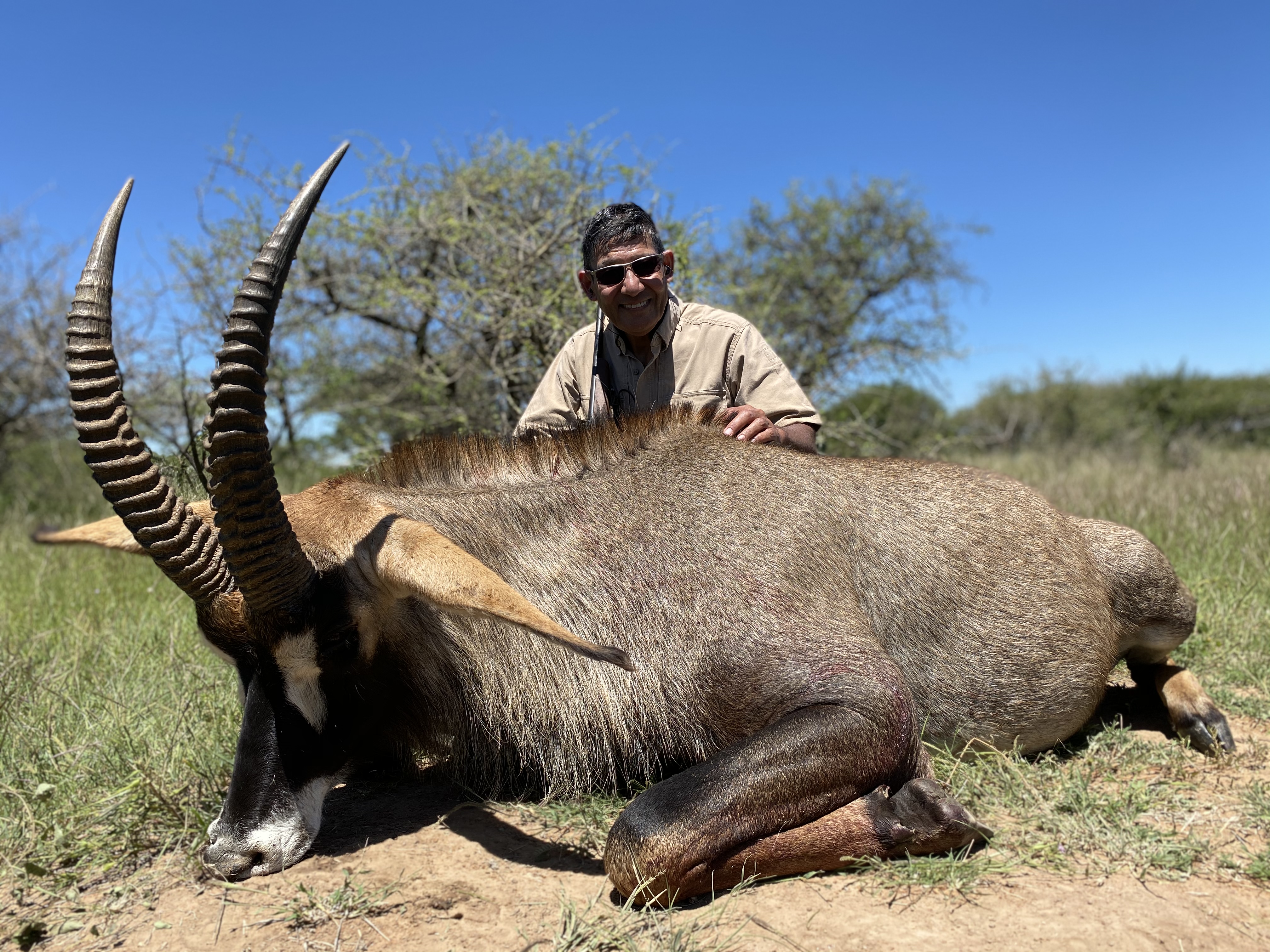 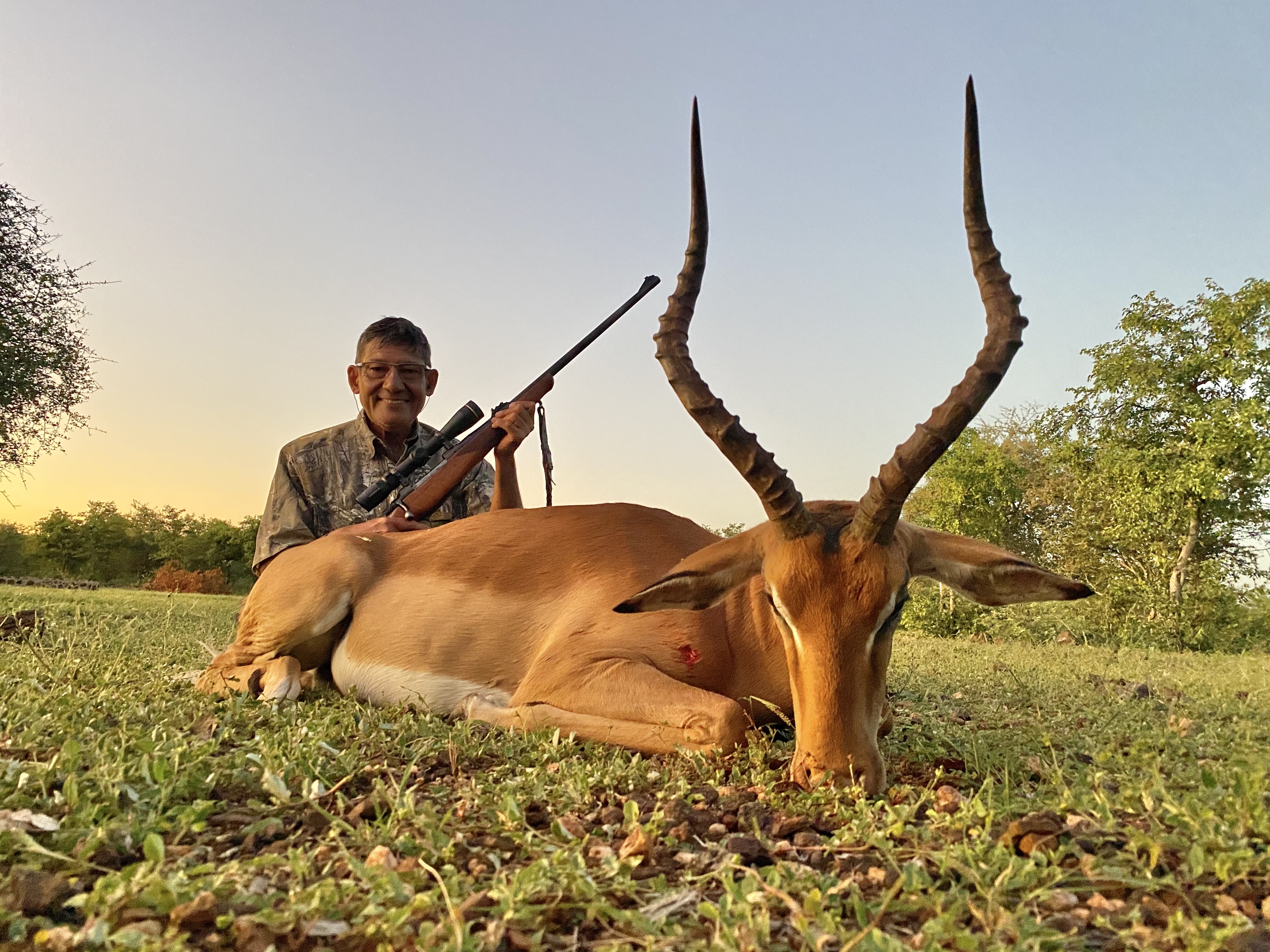 All very nice trophies. How big was the croc, sable and roan May I ask?I ask because they are all on the hit list, maybe not for next year but in the near future.
Tommorow is promised to no one. Go live your dreams.

Thanks Johnnyblues. I really do not know. This was our first hunting safari so we were not really measuring anything as long as the PH told us it was a suitable trophy.
M

Sjakon said:
Thanks Johnnyblues. I really do not know. This was our first hunting safari so we were not really measuring anything as long as the PH told us it was a suitable trophy.
Click to expand...

Heck of a first safari, nice trophies to start and end it! Congratulations!

Sjakon said:
Thanks Johnnyblues. I really do not know. This was our first hunting safari so we were not really measuring anything as long as the PH told us it was a suitable trophy.
Click to expand...

Understood.
Tommorow is promised to no one. Go live your dreams.

What a safari! Congrats and thanks for sharing!
John 3:16
You must log in or register to reply here.